*In association with Aviva Community Fund 2017*

As the clock hits 10.30am, the 280 children of Ysgol Gynradd Gymraeg Pont Siôn Norton Primary School in Pontypridd file out from their classrooms and onto the yard for their morning playtime.

In the junior school yard, an orderly queue forms as many of the year 3 to 6 children (aged between 7 and 11) take it in turns to swing across the monkey bars, step across the stepping stones, walk over a balance beam, and climb up and over the red cargo net. They cheer each other on. They help the smaller children who can’t quite yet reach. There are huge smiles on all of their faces.

Playtimes weren’t always so exciting at the Welsh-medium primary school though. 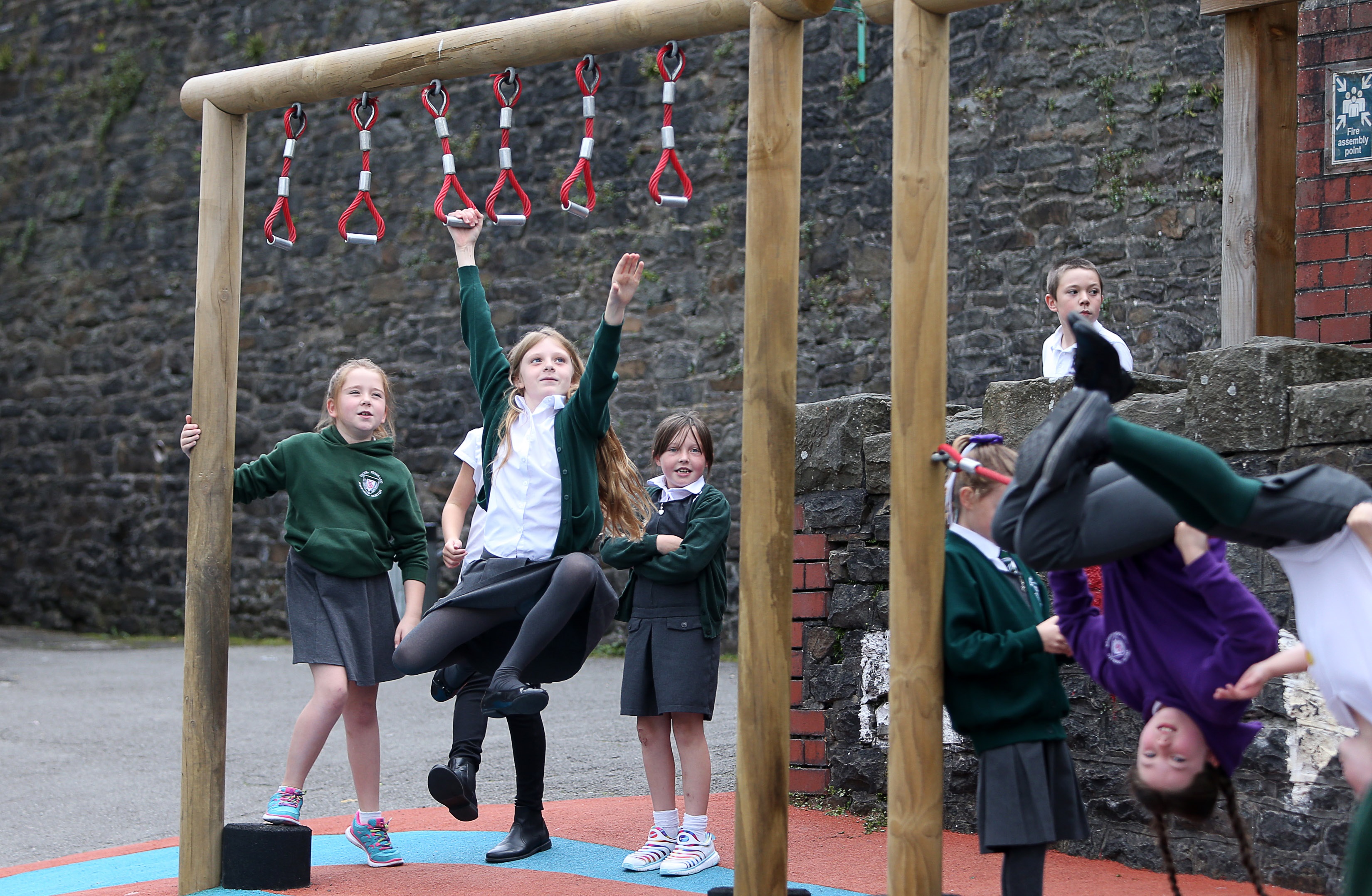 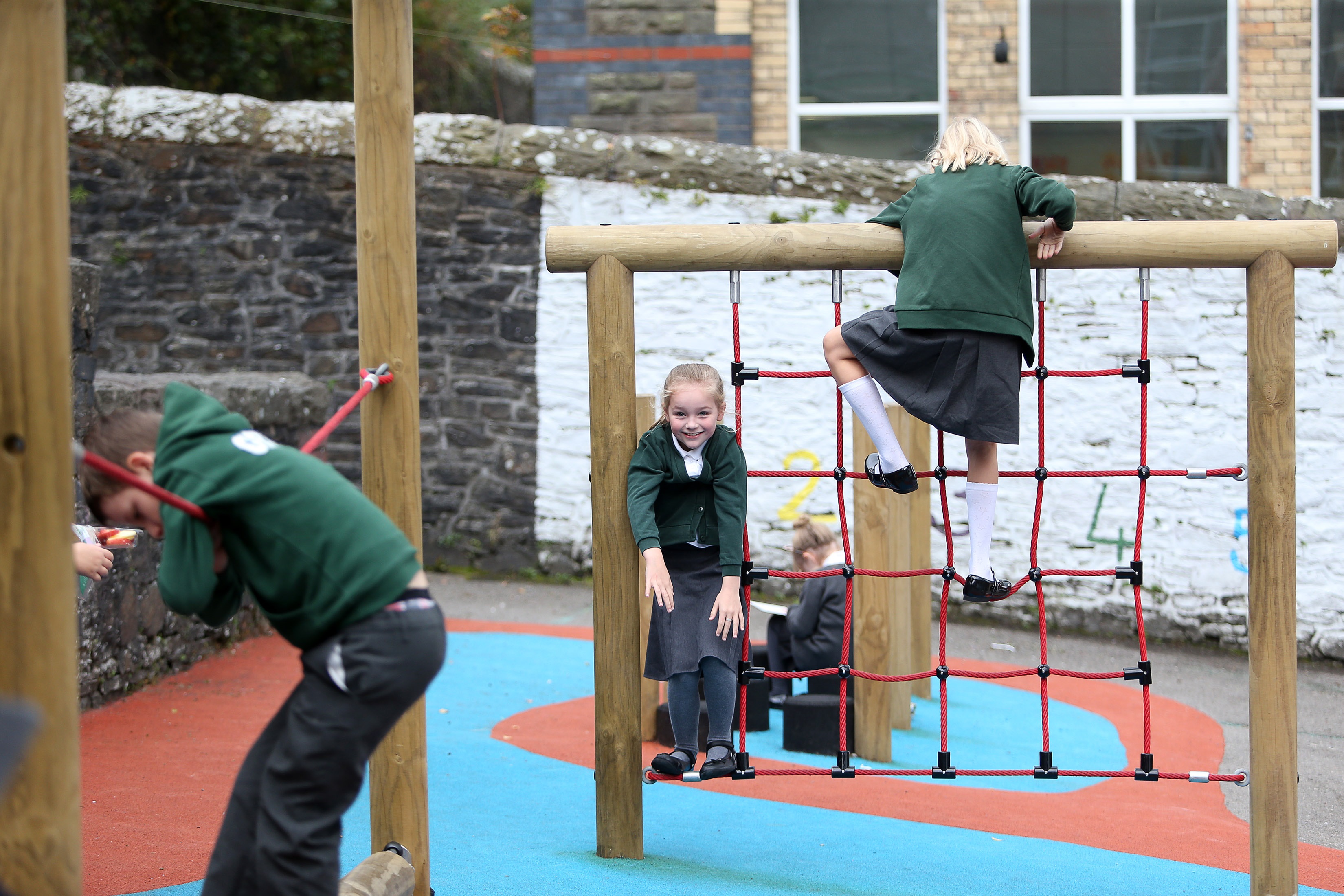 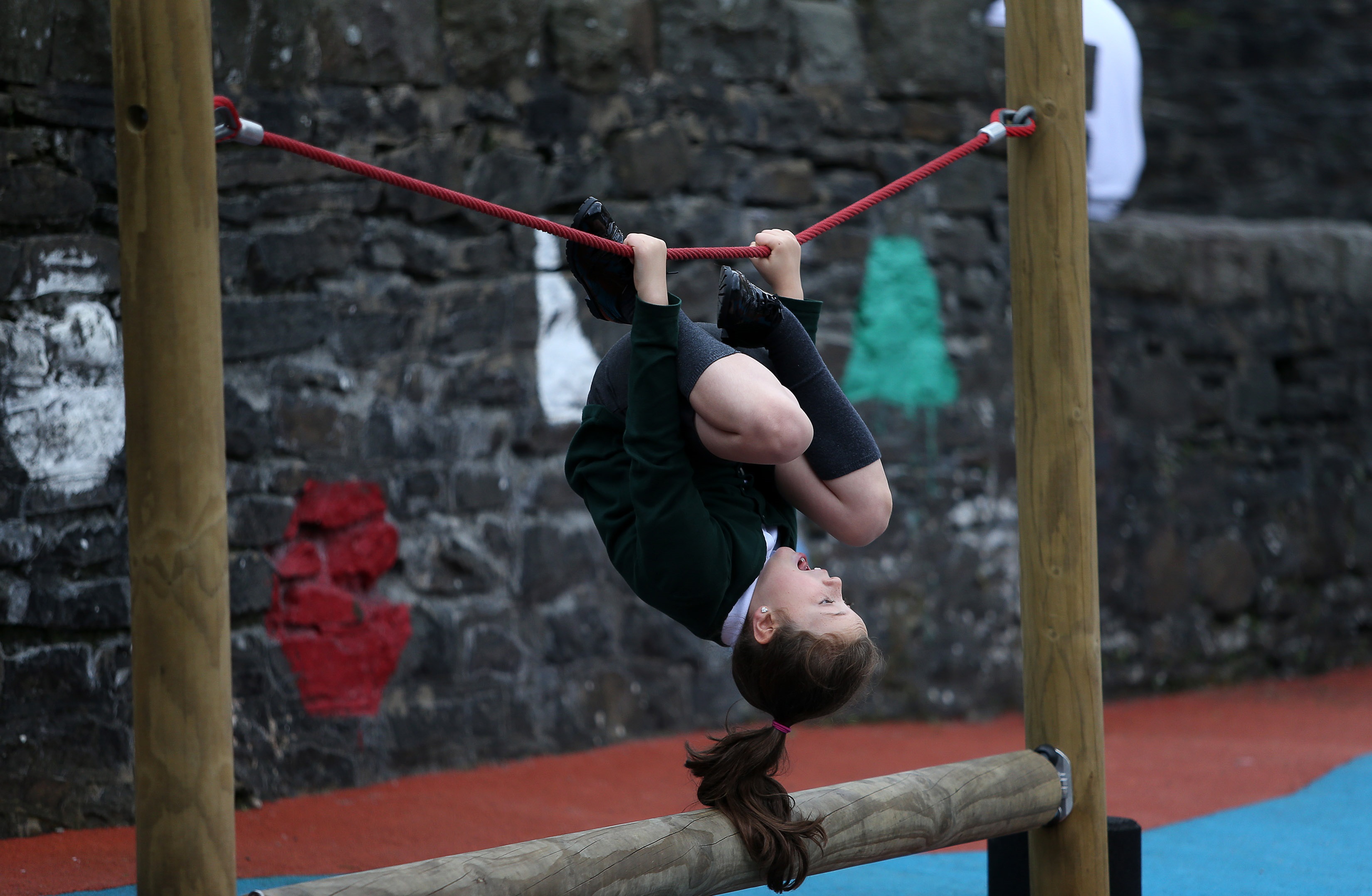 The primary school is built at the top of a hill, overlooking rows of terraced houses, the A470, and a quarry and the children were accustomed to playing on a sloping concrete yard.

But slowly, over the last four years, the volunteers on the school’s Parent and Teacher Association (PTA) have tirelessly fundraised to transform the grey concrete yard into a more colourful and creative space for the children.

In their words, the yard was “bleak”, especially during the winter months when its hilltop location puts it at the mercy of the elements, and looked exactly the same as it did when some of the current parents were pupils at the school themselves in the 1980s.

The yard used by the youngest nursery and reception age children now has a play house, murals on the wall, and a sheltered outdoor learning place with rainbow-coloured rubber safety flooring.

The yard used by the year 2 and 3 children has two large tepees and a smaller climbing structure on green safety flooring.

There’s a netball court, plus a sheltered area with benches for those children who want to chill out during their play times, and where outdoor learning takes place.

And, in April this year, the school welcomed the outdoor obstacle course for the older children. 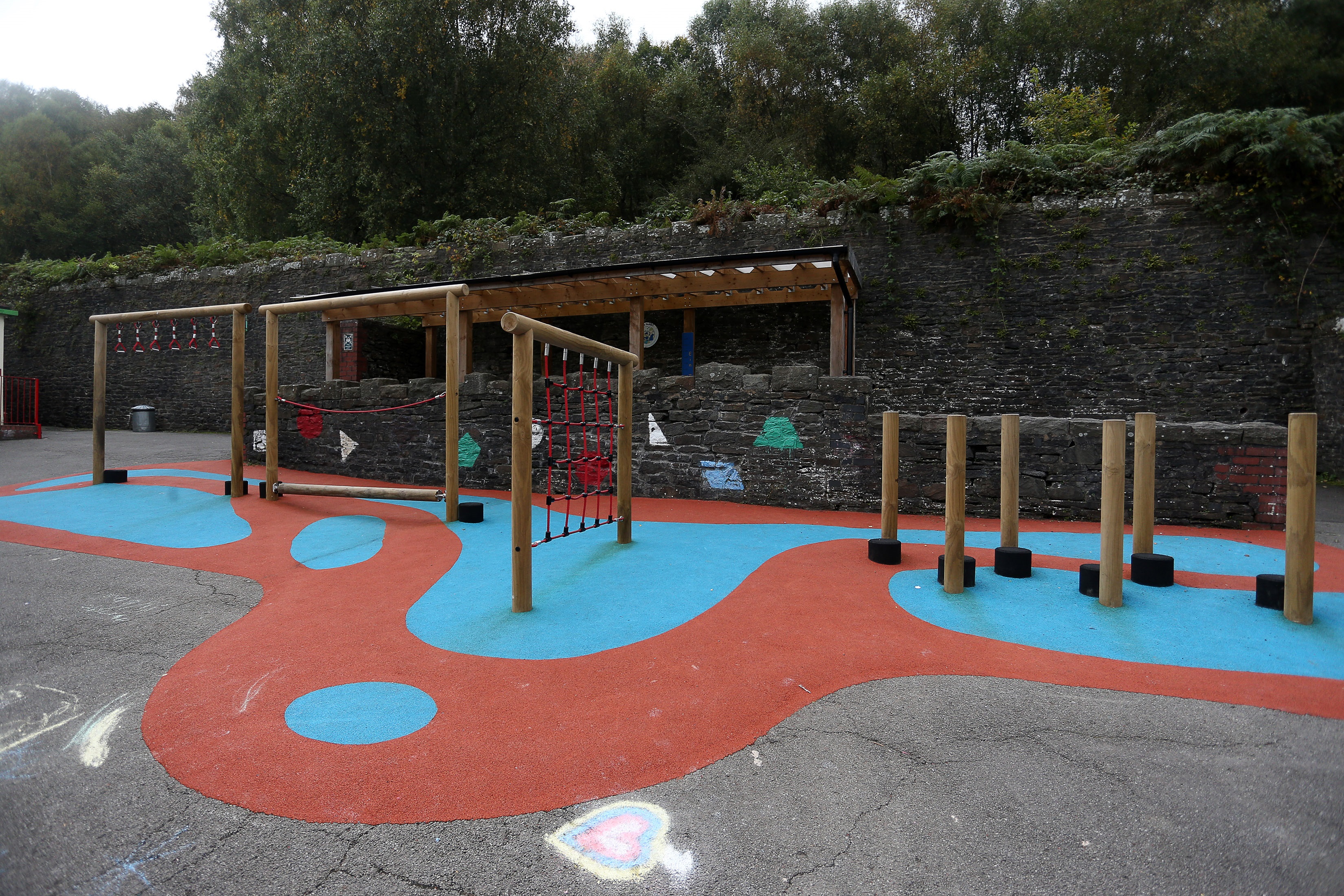 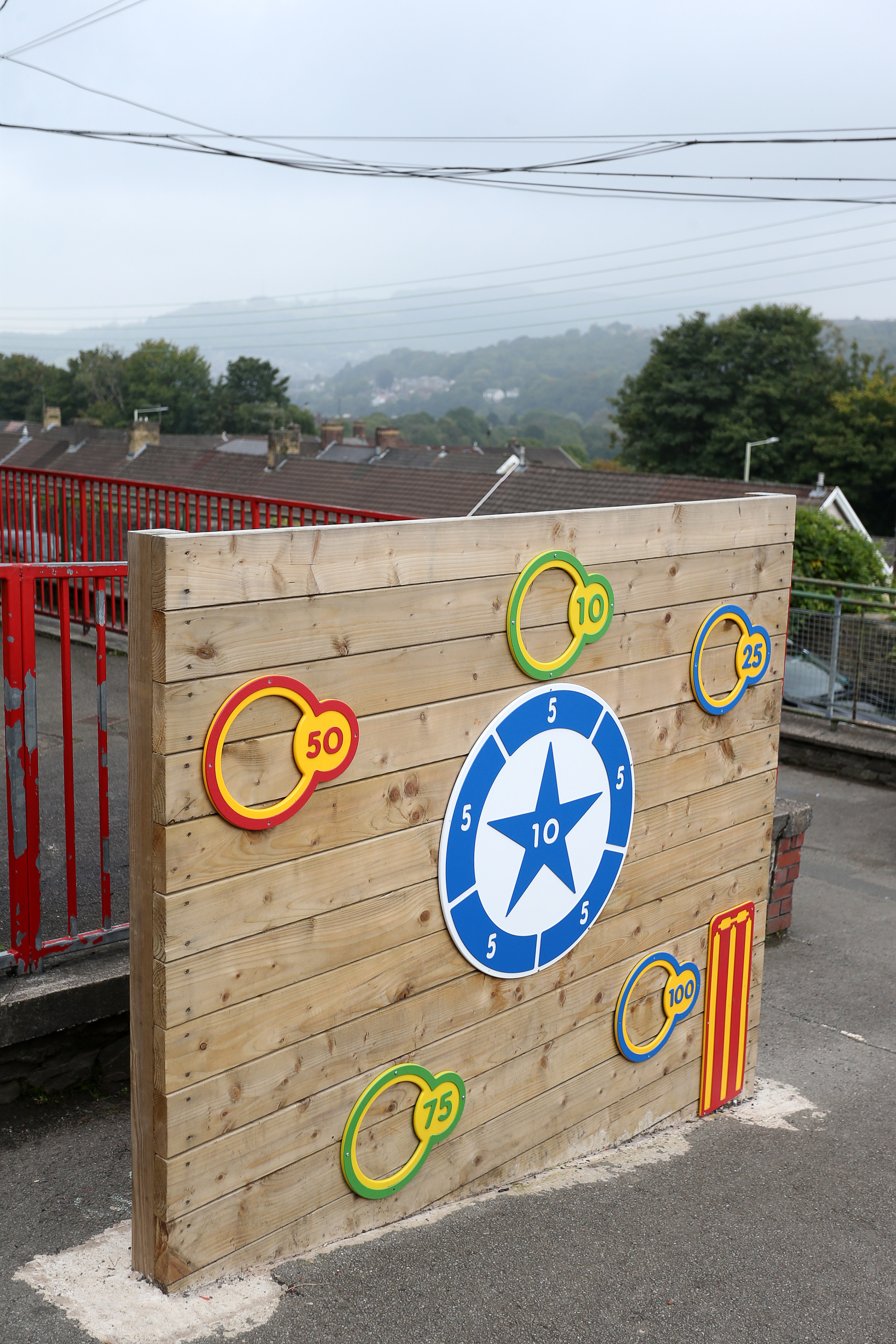 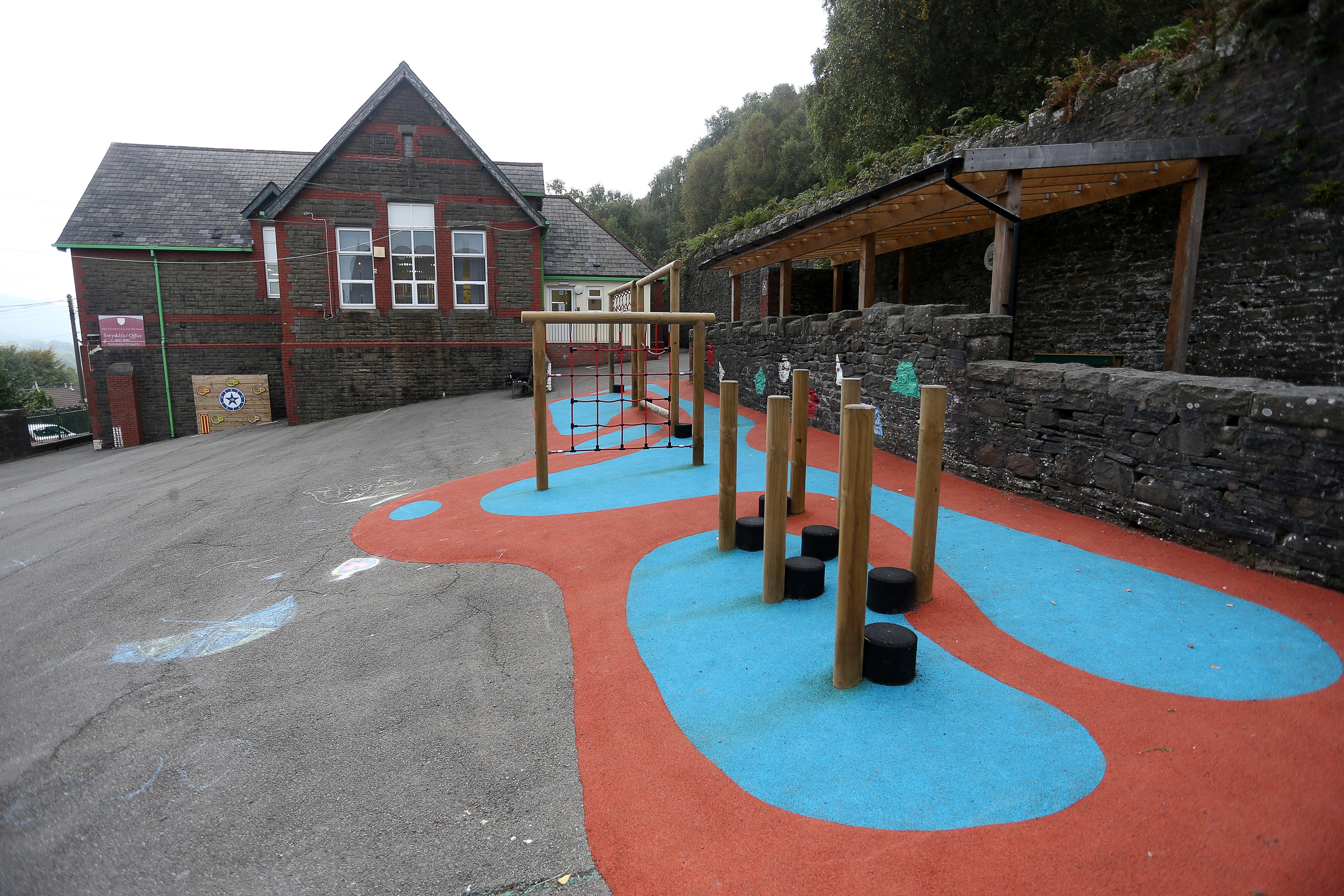 This particular equipment, as well as the colourful rubber safety flooring underneath, and a target practice wall used for ball games, was funded thanks to a £10,000 grant from the Aviva Community Fund, awarded to the school in January of this year. Ysgol Pont Siôn Norton’s funding goes to show how small things like rubber safety flooring can make a big difference to local communities.

Now in its third year, the Aviva Community Fund provides funding to community groups and charities who are making a real difference in their communities. The school was one of 450 community groups across the UK awarded with grants ranging from up to £1,000 to £25,000.

The 2017 fund is now open with the closing date for submissions being 10th October. Voting will take place from 24th October -21st November with the finalists announced on 28th November and the winners announced on 16th January.

The link to submit your application is below. You’ll also find information on the Aviva Community Fund website on how to put together your application with the ACF Team Toolkit, which includes advice from content creators and social media experts on how to make your content stand out. 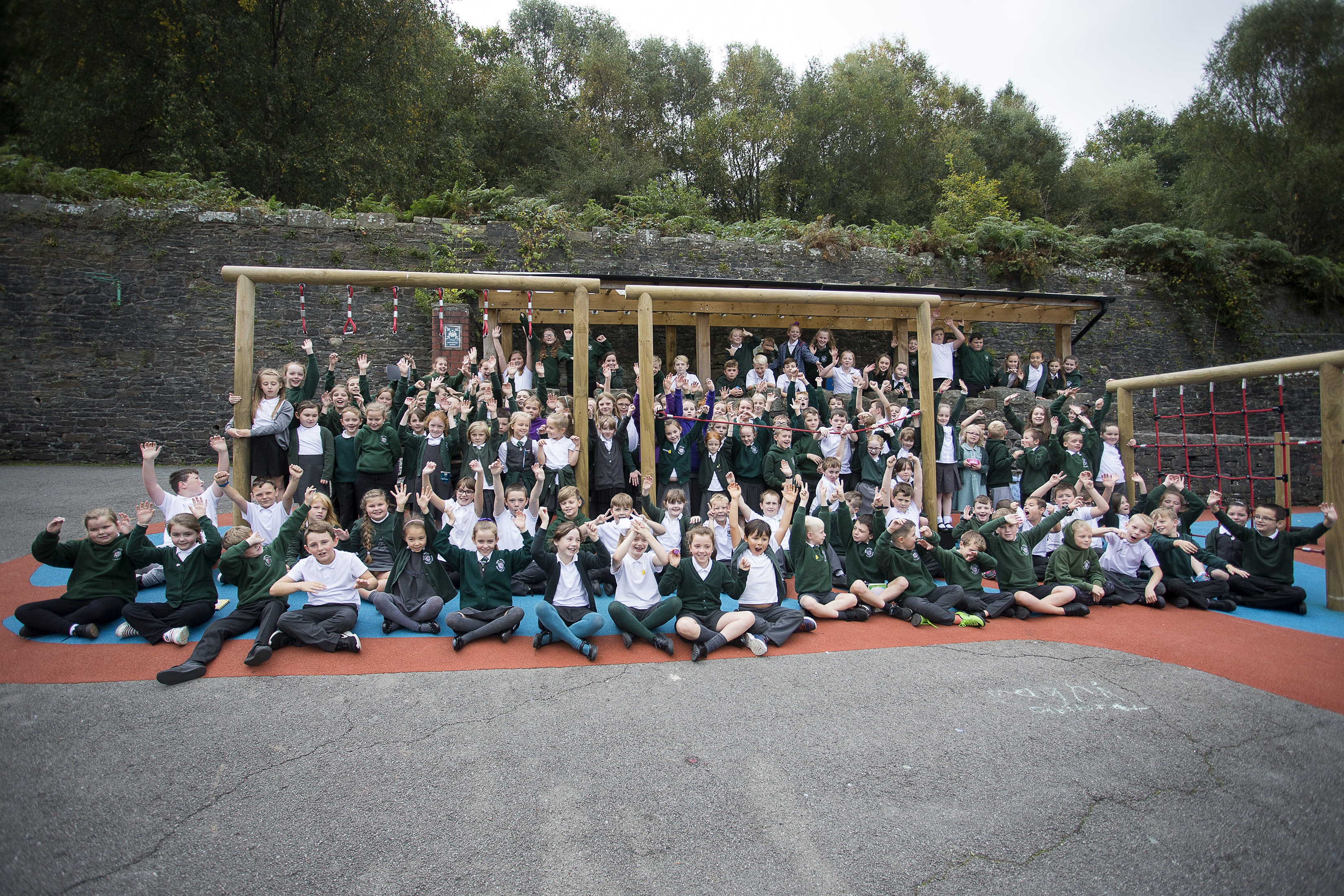 Stacy Price, treasurer of the PTA at Ysgol Pont Siôn Norton, knows only too well what a massive impact the Aviva Community Fund can have within a community.

Stacy, who is also a mother of three children at the school, says the children couldn’t believe their eyes when they came back from their Easter holidays and saw the new equipment.

“They asked ‘Is this really for us?’ and ‘Do we get to keep it?’” she says as she shows me around the three different playing spaces and three different school buildings hat make up Ysgol Pont Siôn Norton. “Over the last four years we have consulted a lot with the children over the kind of equipment we should get. The older children told us to make sure we got stuff for the younger children first – it was their idea for them to have the rainbow flooring to help them learn their colours for example – so it’s great they now have something age-appropriate in their own yard.” 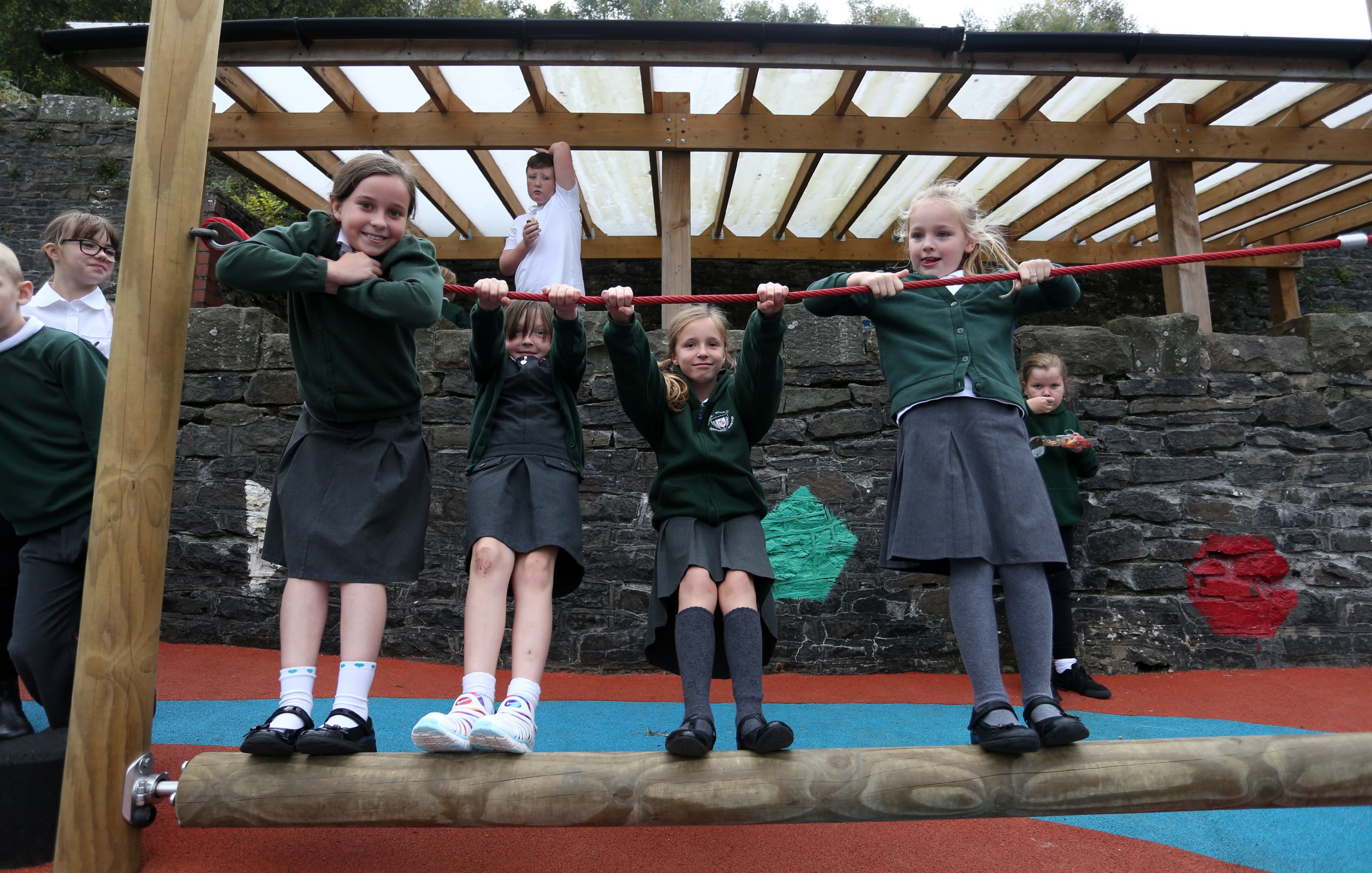 Indeed the older children are all too keen to tell me how much they love their new playground equipment.

“We all really look forward to play time and lunch times,” adds their friend Eva.

They all can’t thank the parents on the PTA and the Aviva Community Fund enough.

Headteacher Duan Evans joined the school in April 2013. He explains that when children begin year 3 and Key Stage 2, the focus changes. Their learning is less play-based than what they are used to in the younger Foundation Phase. “It’s still important for the older children to play,” he says. “It’s good for them to let off steam and burn off energy before going back into their class. 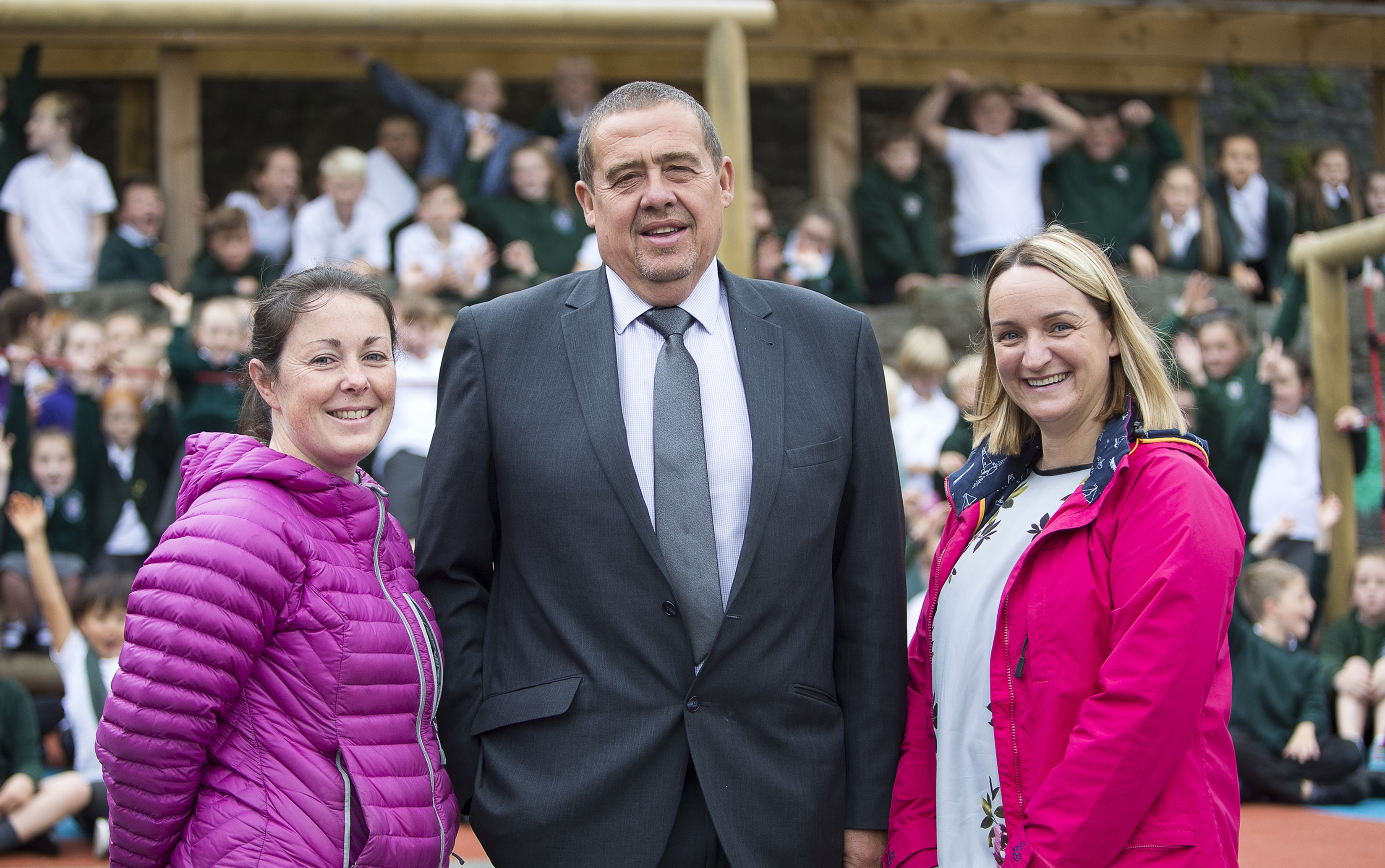 “We have seen a difference in terms of pupil behaviour” he adds.

“They can see that somebody has done something for them.”

Catrin Hughes is another mum of children at the school as well as vice chair of the PTA. She admits that after years of tirelessly fundraising for the yard, the members of the PTA – which is chaired by another mum at the school, Donna Evans – were all flagging. They had been approaching local businesses applying for every funding opportunity they could find, and getting parents to help with painting and so on.

She explains that as the school has a high proportion of pupils from deprived areas it’s not as easy to raise money as in more affluent areas. “We hear about other PTAs who raise £20,000 a year and we just can’t do that,” she says. “We hear about schools raising money for new IT suites – and we just want a few computers.”

“You feel like you are asking for money all the time,” Stacy adds. “It’s not just the PTA asking. It’s money for school trips, events and activities. It’s expensive, especially if you have more than one child. You want to give your children those opportunities – but some families just don’t have the money.”

Before applying for the Aviva Community Fund, contractors had already visited the school to quote for the new play equipment. But the PTA had no idea when – or even if – they would be able to raise the funds for it.

“The grant has given us all such a boost,” says Stacy “Instead of thinking ‘how many years will it take us to raise the money?’ the money was just there. We felt like we had finally been rewarded for all our hard work; that good things do happen to good people.

“The grant couldn’t have come at a better time.”

After the school applied for the grant, the next step was rallying the local community for votes in the hope of progressing to the next stage of the process. A week before the end of the voting period the school had around 500 votes. However, a coordinated campaign from parents saw them asking everyone they knew to support the school.

Within a few days, the project had more than 7,500 votes – a few thousand more than the next highest in their category.

This meant the school made it onto the shortlist – and then it was a nervous wait to see if the judges would select them for the funding. 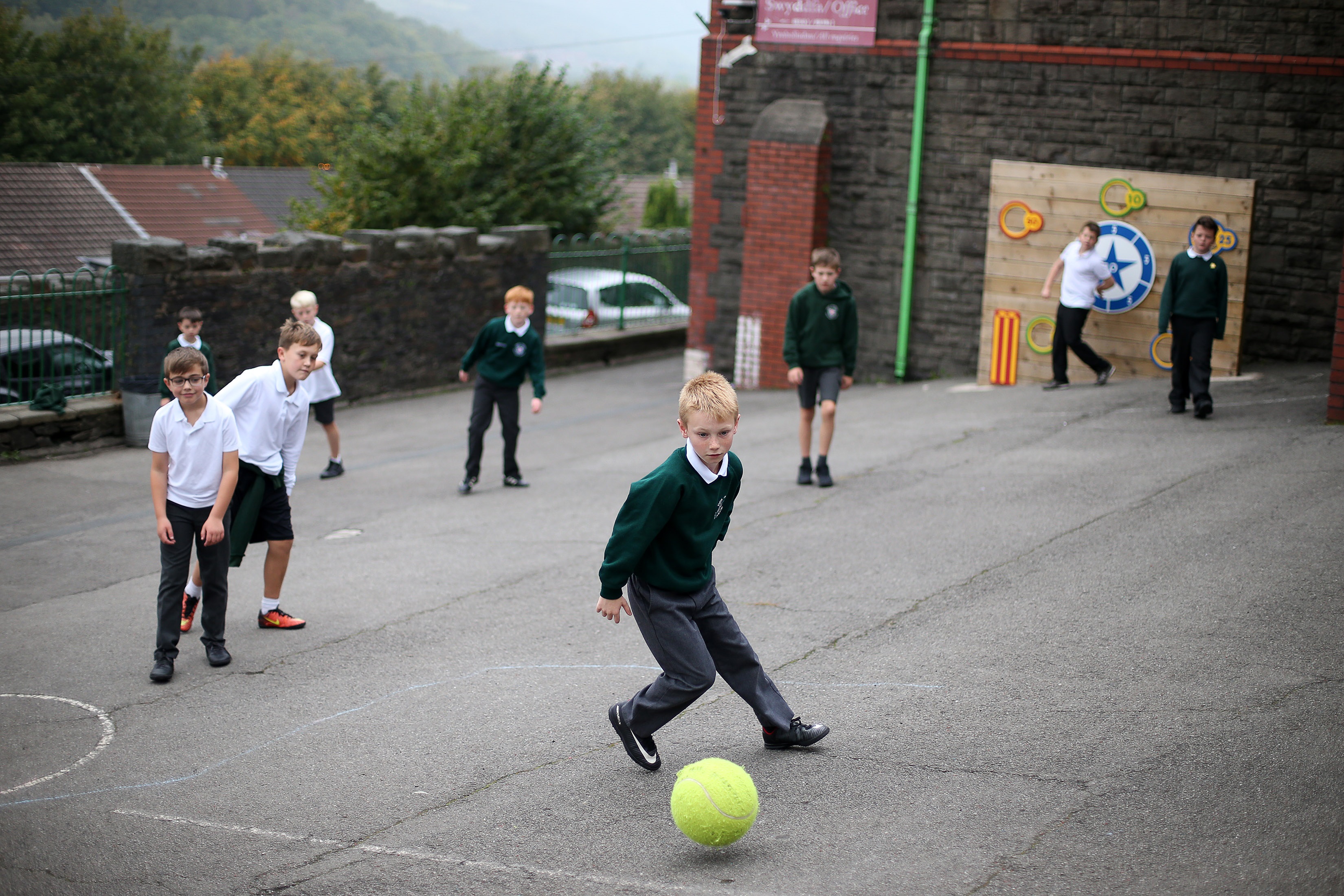 “I was in work in my open plan office when I got the news,” says Stacy. “I rang the other PTA members and the school straight away and we were all crying and screaming down the phone. It meant so much.”

She adds “It’s not just about the playing. It has transformed the school community. As a Welsh-language school we have a really wide catchment area. Children are bussed in from different areas and we all live in different places. Until recently there wasn’t much of a community at the school. But it’s changing.

“Parents can see what their money is being spent on in a way that you can’t when we are buying classroom resources. We have had more parents volunteering to help out at events.

“The transformation of the yard has helped bring us all together.” 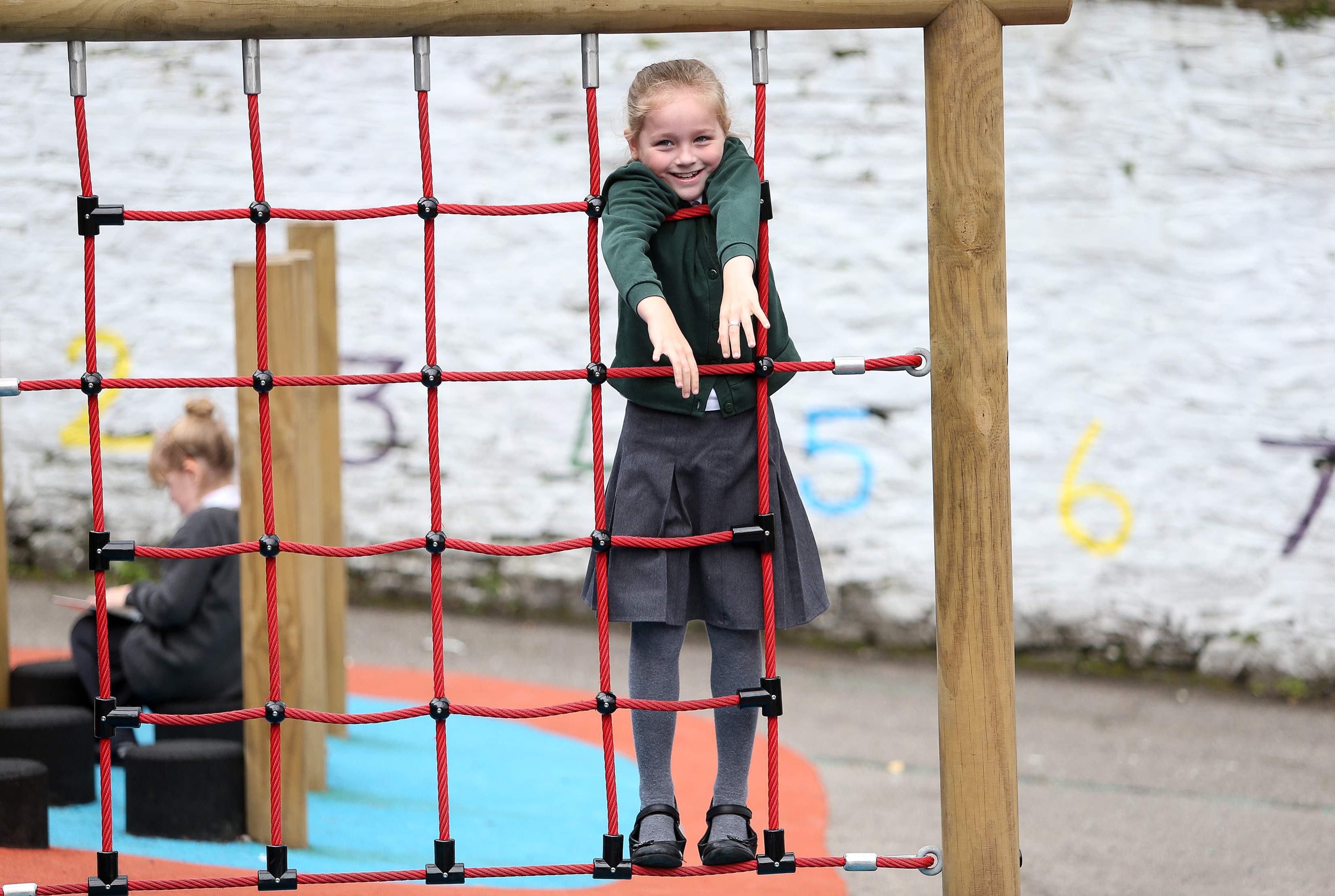 Do you know a local project that needs funding?

For local projects, small things can make a big difference, but funding may be a challenge.

That’s where the Aviva Community Fund comes in. The 2017 scheme launched on 12th September to support good ideas making a real difference where it matters most.

Community groups have until 10th October to submit their entries. Voting opens on 24th October and runs until 21st November. The finalists are announced on 28th November with the winners announced on 16th January 2017. 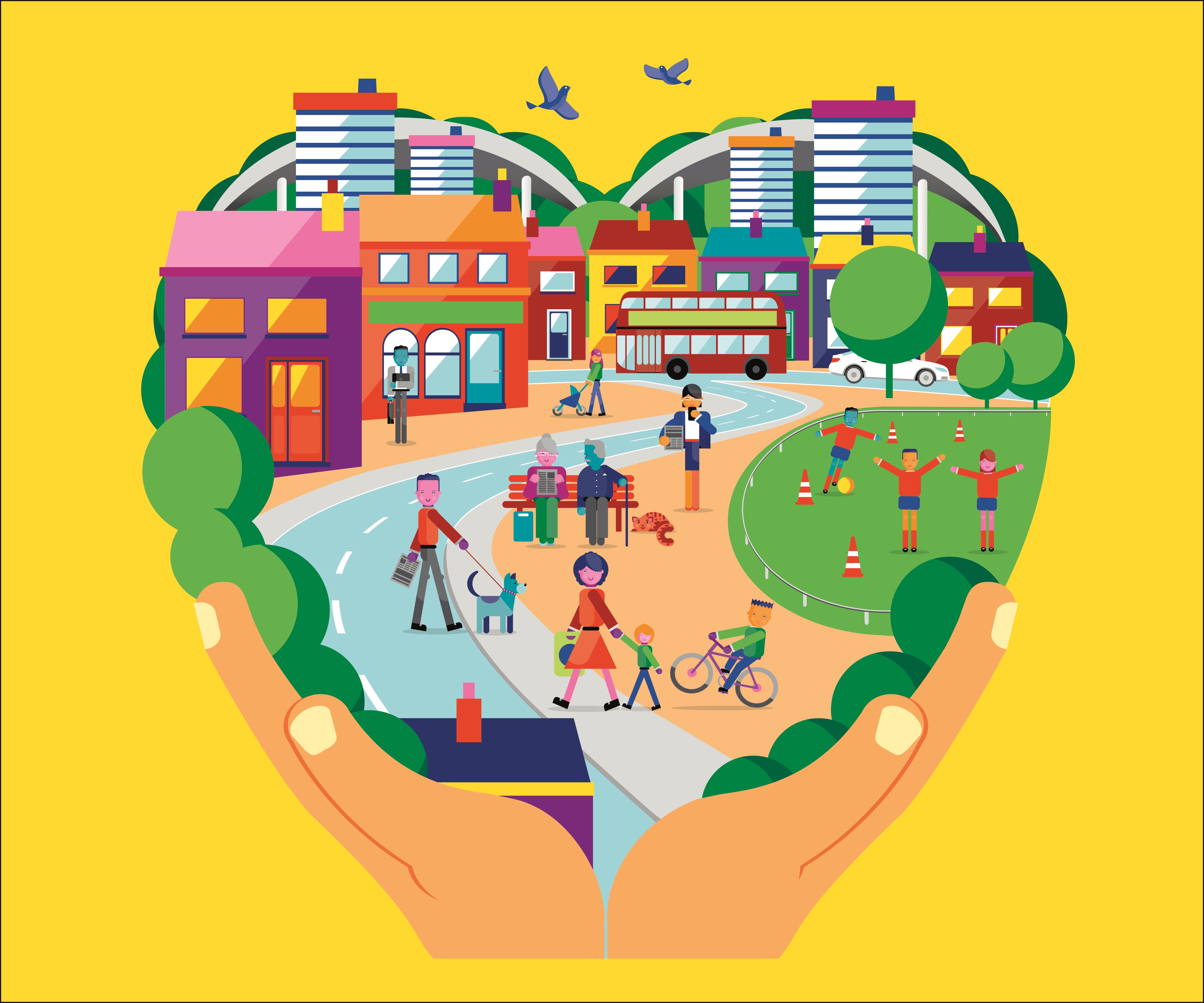 To apply for funding, just tell Aviva how your project will make a positive change in one of these categories:

You need votes to get your project to the finals, so start rallying friends, family and neighbours now!

However, Aviva knows how much work it can take for volunteers in smaller projects to pull their entries together and rally voters.

Most smaller projects ask for funding up to £1,000, so to recognise all their hard work, Aviva will automatically give the first 200 projects to reach 1,000 votes in this funding level the funding they ask for. If you’re one of the lucky 200 projects, Aviva will let you know. If you’re not one of those 200 projects, you’re still in with a chance of winning your funding.

To get involved, submit a project or vote visit www.aviva.co.uk/community-fund. Entries opened on 12th September, closing dates for entries is 10th October 2017. 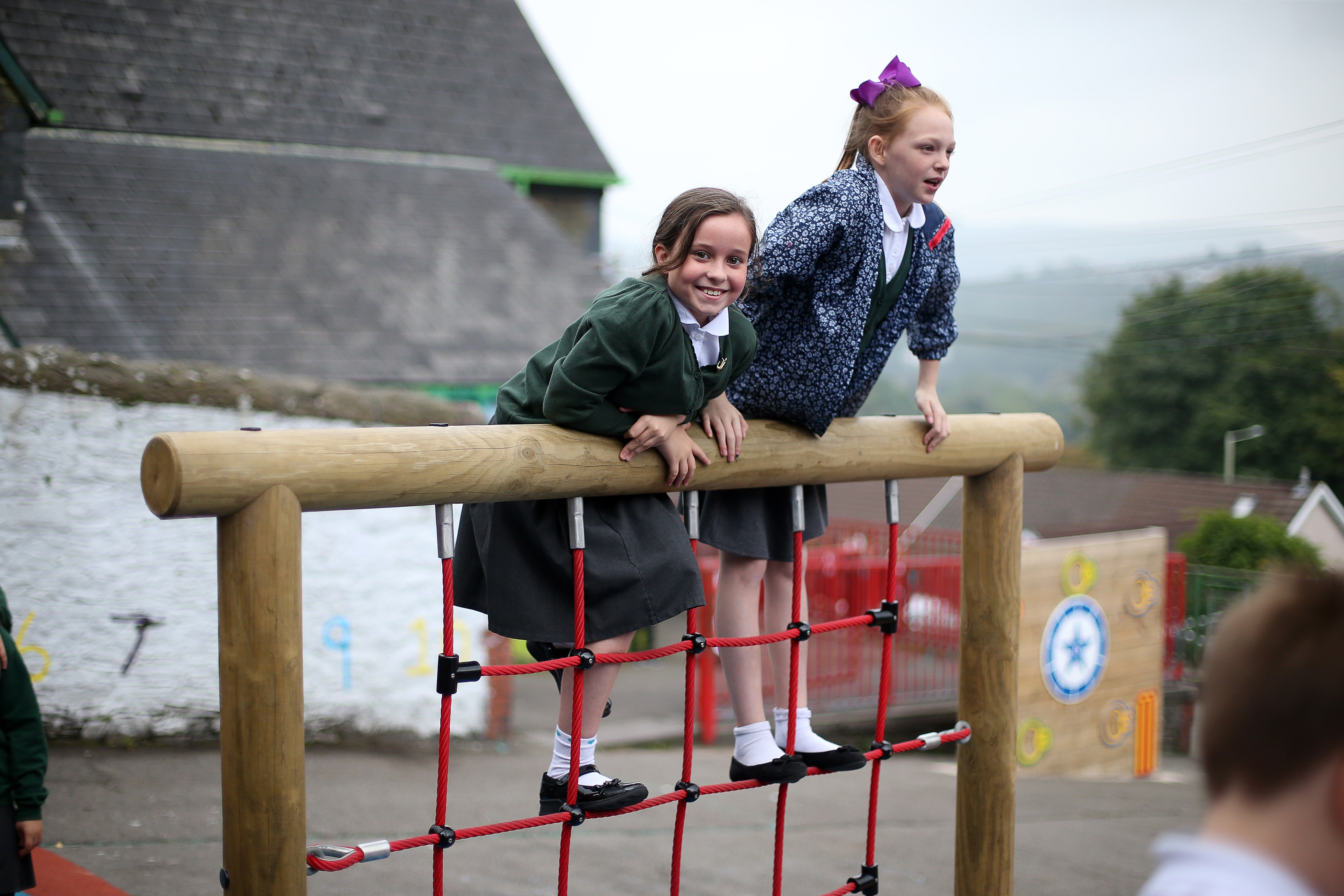 All photos by Huw Evans Agency