A review of Match, at Sherman Cymru, Cardiff 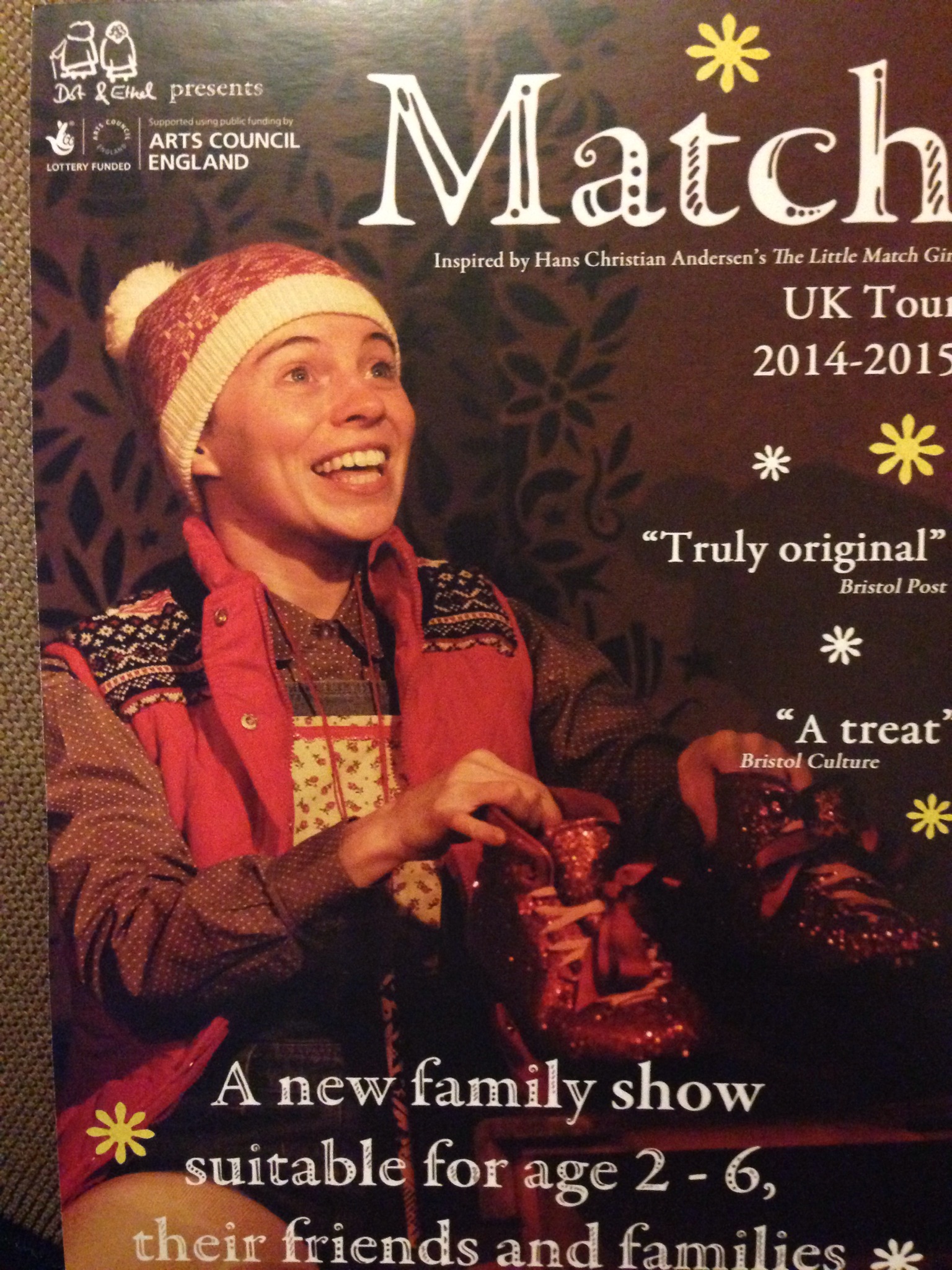 Hans Christian Andersen’s The Little Match Girl is a heart-breaking tale of a poor young girl who sells matches to make money. After an unsuccessful day of working in the cold, she is too scared to go home to her abusive father. In the throes of hyperthermia, she lights matches to keep herself warm, seeing her dead grandmother in their glow. When the last match burns out, she joins her grandmother in heaven.

It’s a beautiful tale but a sad one too, and not something I have read to my nearly-five-year-old, three-year-old and seven-month-old as yet. So I was intrigued to know how fledgling Bristol-based theatre company Dot and Ethel would repurpose it into a performance for children aged two to six.

I’d heard good things about this show when it was originally staged in Bristol as The Little Match Girl at the end of last year. However, I also know that that since then it has changed somewhat, now repackaged into the 50-minute Match and touring the UK for the best part of four months.

Having seen several shows for young children at Cardiff’s Sherman Cymru, this certainly wasn’t what I expected, that’s for sure. Yes, it was fun, inventive and imaginative – but it left me feeling a little baffled.

There is very little dialogue for a start, no more than a few lines scattered throughout. Instead, it relies on physical theatre and humour to engage its young audience and to tell a loose version of the story, set in more modern times as two young girls head off on an adventure.

Eloise Secker and Jade Berks play the two girls. They open the performance with a routine that involves making various blowing noises and sheets of newspaper moving around the room, as they embody the wind and the cold. Most of the children thought this was hilarious, but for me, it went on slightly too long.

Baby I was entranced but Little E – my almost-five-year-old who has seen a lot of theatre in her short life – looked confused by the lack of talking. “When does it start?” she asked me.

The rest of the story is interpreted in a similar way, with objects from the old-fashioned set moved around and repurposed as the story unfolds. Old strips of material become Granny’s clothes. A bunch of cardboard boxes and a doll’s house are transformed into a model of the street Granny used to live in, complete with fairy lights overhead. The props are later covered with a white sheet to create a glacier, with the fairy lights draped across the stage to symbolise the little girl’s journey to heaven. I’m not sure how many of the children in the room understood that. Little E said it reminded her of the film Frozen (interestingly also based on a Hans Christian Andersen story, The Snow Queen), with the two girls fighting against the elements in the same way as the princesses in the film do.

I get the impression that Dot and Ethel are the kind of company who will continually keep working on the show, responding to what works well with their young audiences and letting the performance develop and evolve naturally. It will be interesting to see how it changes over the tour, as the relationship between Eloise and Jade gets stronger. These two are certainly a good pairing with a great on-stage relationship. Considering how little dialogue they have, they keep the audience engaged throughout and are enthusiastic, energetic and very watchable.

The show also works well in Sherman Cymru’s studio space. This is one of our favourite places to watch theatre. It is a lot more informal than the main theatre, with youngsters invited to sit on cushions near the front if they wish, and adults behind. Being so close to the action, the audience can see every expression on the performers’ faces and it’s easy for them to interact. Small touches like balloons being bounced around the room, and bubbles being blown about delight the children.

This show isn’t perfect, and elements confused me, but it’s a clever retelling of a classic tale, gently and subtly introducing deeper themes to young children.

For the purposes of review, we were given a family ticket for the show and I have also written a version of this review for www.theatre-wales.co.uk

Homepage » children's theatre » Energetic, lively and fun – but a little bit baffling too