When the audience begin to take to their seats for What The Ladybird Heard the curtains on the New Theatre’s stage are already open. All around us are gasps as people comment that the farmyard scene in front of them makes it feel as though they’ve stepped onto the pages of Julia Donaldson and Lydia Monk bestselling book. The bright colours and bold designs really do make it feel like the familiar illustrations have come to life before our eyes. It’s no surprise then to read in the programme notes that the show’s producers and designers worked closely with illustrator Lydia Monks herself to bring her pictures to life. 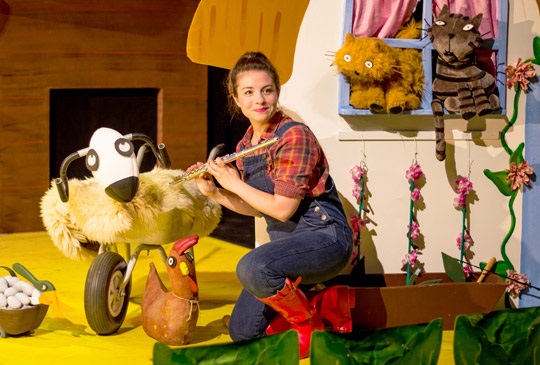 But a good set would be useless without a good show and thankfully this hour-long touring production from Kenny Wax and Matthew Gregory delivers on that front too with a delightful and fun performance full of toe-tapping catchy original music and plenty of audience participation to keep the youngsters engaged throughout.

The show begins with the affable cast of four – Emma Breton as the farmer; Emma Carroll as Lily and the Ladybird; Benedict Hastings as Lanky Len; and Edward Way as Hefty Hugh – speaking directly to the audience. They say they are going to tell us the story of What The Ladybird Heard – about a small but ever-watchful ladybird who manages to enlist the help of various farmyard animals to foil an attempt by two robbers to steal a prize cow. 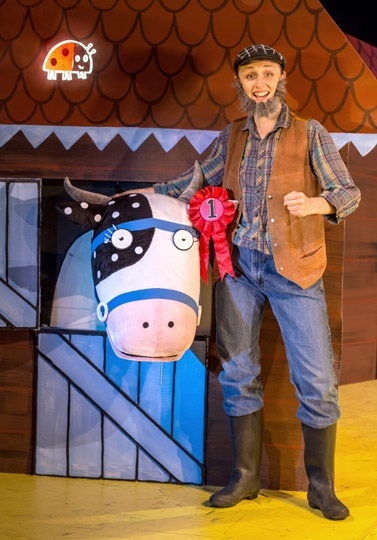 But first they need to find costumes and animals and, of course, the ladybird. There is much amazement as the actors transform everyday farmyard items scattered around the stage into the animals. With a few tweeks, an upside down metal bath and a bucket become a horse; a broom becomes a dog; a wheelbarrow, a rug and a rugby ball become a sheep; and so on until we have the full contingent of farm animals needed to tell the story. The sheer delight on the faces of the youngsters when the ladybird pops up at various points around the stage is so magical. 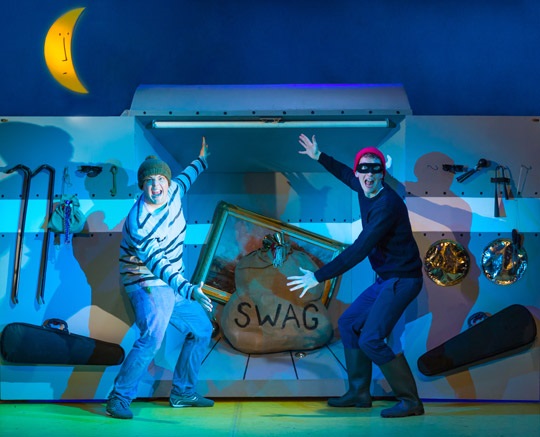 All four of the cast deliver strong performances but for me Hastings and Way as the two bumbling robbers stand out for their comic timing and hilarious dancing. I also loved Carroll and Breton’s playing of musical and percussion instruments at the side of the stage adding much humour to the robbers’ scenes. 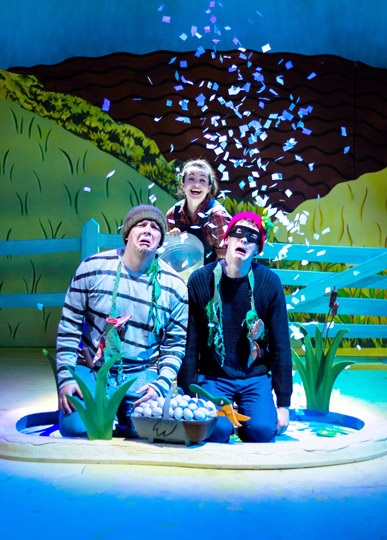 We’ve seen a number of stage adaptations of children’s books, including several Julia Donaldson titles, over the years and this is definitely one of my favourites. I first reviewed it with my youngest two children back in 2014. My youngest was just six months old; my middle had just turned three and although he loved it at the time unsurprisingly neither of them really remember it. My eldest had just started full-time school and it was one of the first things we did without her. Three and a half years on, and this show has lost none of its appeal. Seeing my children’s eyes light up as the story unfolds (even eight year old Miss E who is on the cusp of being too old for these kinds of shows) was just as enchanting now as it was then.

What The Ladybird Heard is a charismatic show and fantastic family fun. And if you’re quick you can catch it tomorrow or Sunday in Cardiff. 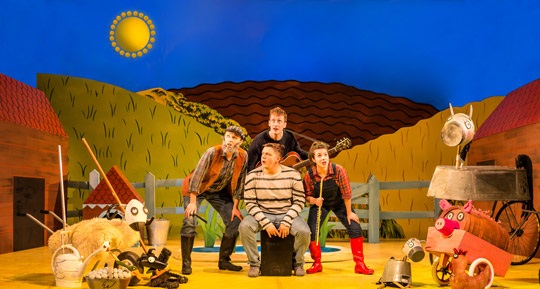 What The Ladybird Heard continues at the New Theatre on Saturday 24 and Sunday 25 February at 11am and 2pm each day. Tickets are still available – see here for details.

The show is touring the UK. See the website whatheladybirdhearrdlive.co.uk for details