Sherman Cymru has gained a reputation for creating exceptional theatre for young children. Their annual Christmas-time show is a festive highlight for many families in Cardiff, mine included. Five-year-old Little E and three-year-old Little O still talk about last year’s show, Corina Pavlova and the Lion’s Roar, even now so I admit we had high expectations when we went to watch this year’s offering, The Ugly Duckling, today. 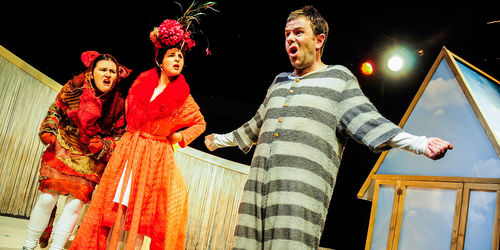 From the moment a large-as-life egg wanders onto the stage, out of which hatches a shabby grey duckling who can only honk while the two pristine white ducklings alongside him quack melodically, it’s clear Sherman Cymru have another winner on their hands. The creative team behind The Ugly Duckling – and the Welsh-language version Yr Hwyaden Fach Hyll – certainly understand their young audience. My children and all those around me thought this opening sequence was hilarious. They were proper belly-laughing, and honking along too, instantly drawn into the action.

Hans Christian Anderson’s The Ugly Duckling is a sad story at times, as the bird is mocked and bullied by the other farmyard animals for his awkward appearance, and struggles to fit in. Katherine Chandler’s adaptation doesn’t shy away from these themes but they are presented in a gentle way, incorporating humour and warmth, subtly getting across messages of inclusion and acceptance of people’s differences.

Iwan Charles is the ugly duckling, dressed in a striped grey onesie, and full of wide-eyed innocence and hope. Anni Dafydd and Gwenllian Higginson are the various farmyard animals our duckling meets as he struggles to find his place in the world. These two make a great pairing. They look physically similar and have a great chemistry between them, and with Charles, too. We saw the show at the end of its second week at the Sherman, and its run in Cardiff follows a month-long stint on the road across Wales, yet the cast of three were full of enthusiasm and energy. 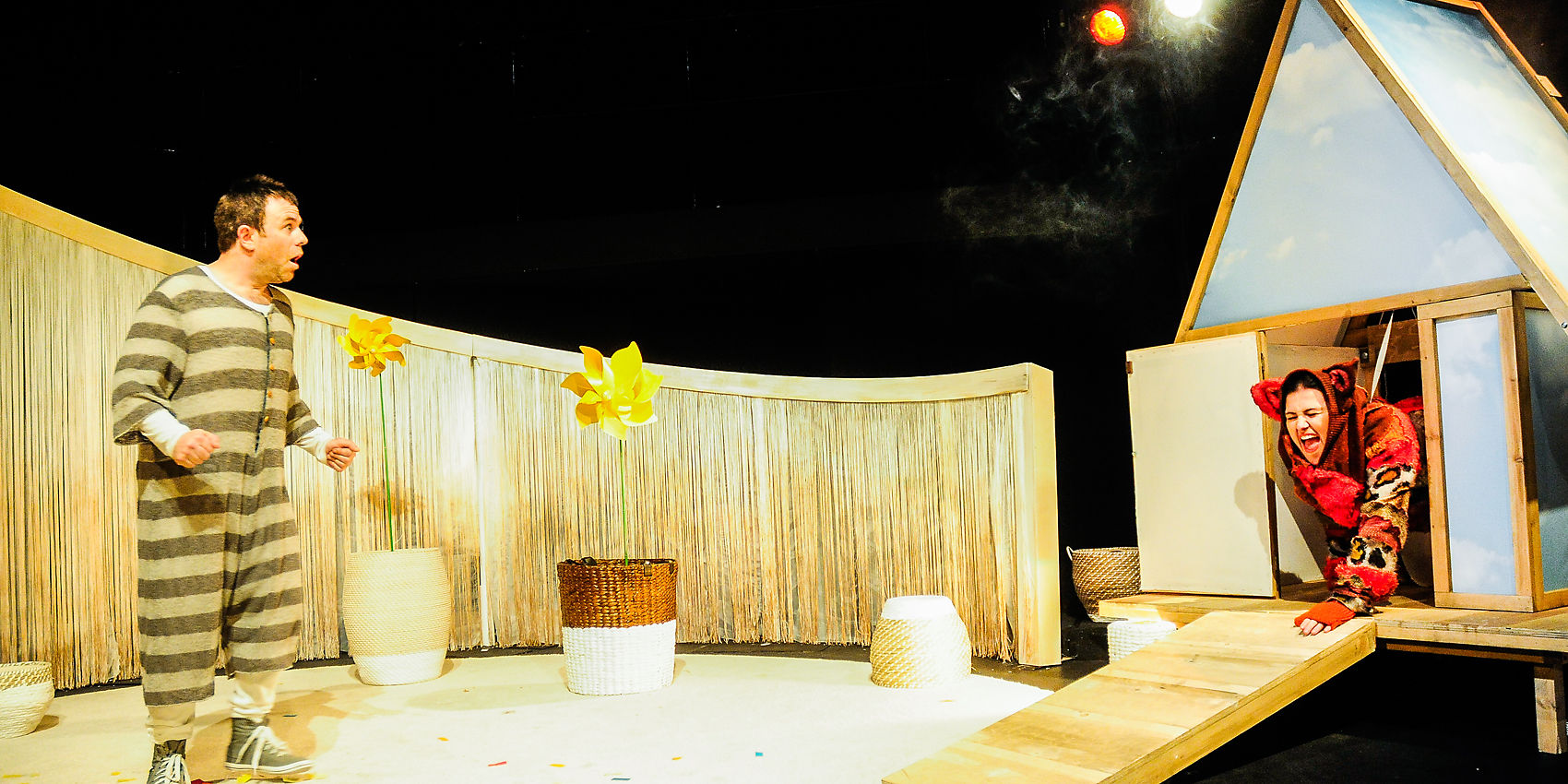 My children loved Higginson as the hen who effortlessly lays eggs while the ugly duckling tries his hardest but fails, only managing a burst of flatulence from all his straining. All the costumes in this show are simple yet effective, mostly made from everyday items of clothing, but the hen outfit is especially imaginative – a red dressing gown with an inflatable ball hidden underneath, giving the hen a rather large bottom that the children thought was hilarious.

Nine-month-old Baby I was entranced by some of the lighting effects, in particular, the moving lights overhead representing birds migrating, and the stars. The red glow of the room depicting autumn, and the leaves being scattered around the room, as the seasons changed, also caught his attention. It’s great to see the cast playing musical instruments throughout the show; the glockenspiel, harp and violin to name but three.

Little E and Little O really enjoyed the song at the end of the show where the audience were asked to join in with making the noises of the animals, including the honk of the ugly duckling. They love this kind of participatory theatre and it was a great way to conclude the performance.  It came at the perfect time too as there was a moment when I thought my children’s attention was starting to wander but then they were instantly drawn back in with the song.

The studio space in which this show is performed is ideal for young children too. It’s a lot smaller than the main theatre at the Sherman, but the relaxed seating approach, where children can sit on mats at the front, works well. No one expects the children to be perfectly still and silent, but the show is so engaging, we didn’t see any real signs of misbehaving or restlessness at all.

The Ugly Duckling is perfect entertainment for families with young children – the parents seem to enjoy it as much as their offspring, and I’m sure I’m not the only grown-up who left the theatre with a warm and fuzzy feeling. It is enchanting, charming and, at around an hour long, the perfect length for the under-six crowd.

The Ugly Duckling/Yr Hwyaden Fach Hyll is at Sherman Cymru until Saturday 3rd January. Tickets cost £8. For more information, visit the website or call the box office on 029 2064 6900.

*Disclaimer: We were given tickets for this performance for the purpose of review, but all opinions are my own.

Have you seen The Ugly Duckling? I’d love to know what you and your little ones thought of it. Come and let me know on my Cardiff Mummy Says Facebook page, or tweet me on @cardiffmummy