When the man I now call Cardiff Daddy and I celebrated our first Christmas living together, we didn’t have a lot of money. We bought the cheapest fake tree we could; a pile of cheap decorations; and a little blue and white fairy to put on the top of the tree.

Fourteen years on and the decorations and the (still fake) tree have been upgraded – but Mary the fairy still sits at the top of our tree. Placing her there has become one of our annual Christmas traditions. The children all want to do it so Cardiff Daddy lifts them all one at a time and they take it in turns to place her at the top. I have photos every year of us all dressed in Christmas jumpers putting Mary onto the tree. 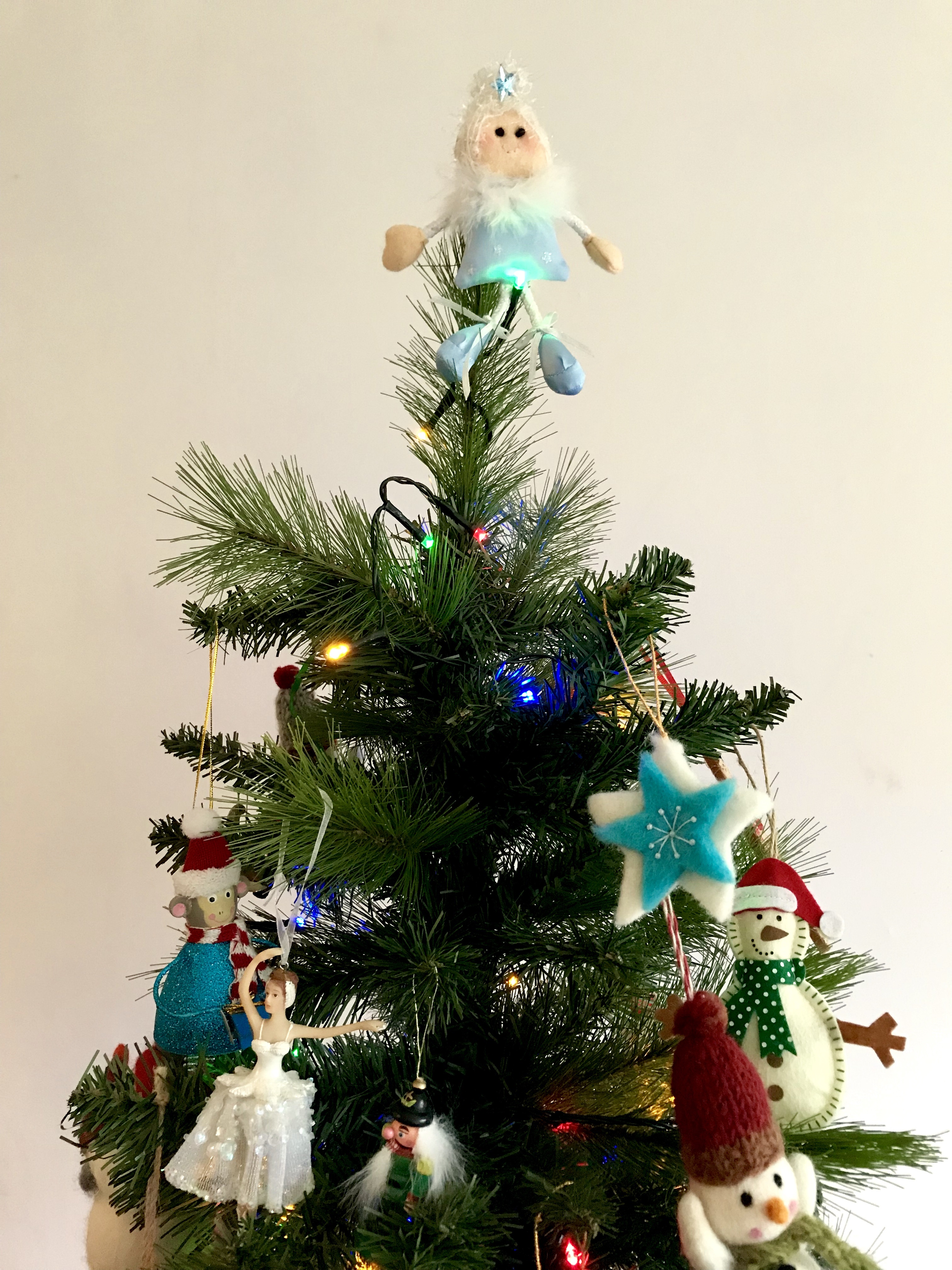 Since having children, our tree has always been a real family affair with a complete jumble of decorations. Each year our elves bring a couple of new ones for each of the children and they get to choose the odd one or two when we’re out shopping too. We have gingerbread men, nutcracker soldiers, snowmen, ballerinas, wooden reindeer, as well as ones they have made at school and nursery. Our tree might be chaotic but it is a storybook of our family at Christmas time.

This year is the first time that we have two trees. As well as the family tree we have a huge beautiful real tree decorated with coordinated red and silver decorations. It sits in the bay window of our front room with an elaborate silver snowflake at the top. My children helped decorate it and it looks lovely even if I do say so myself. 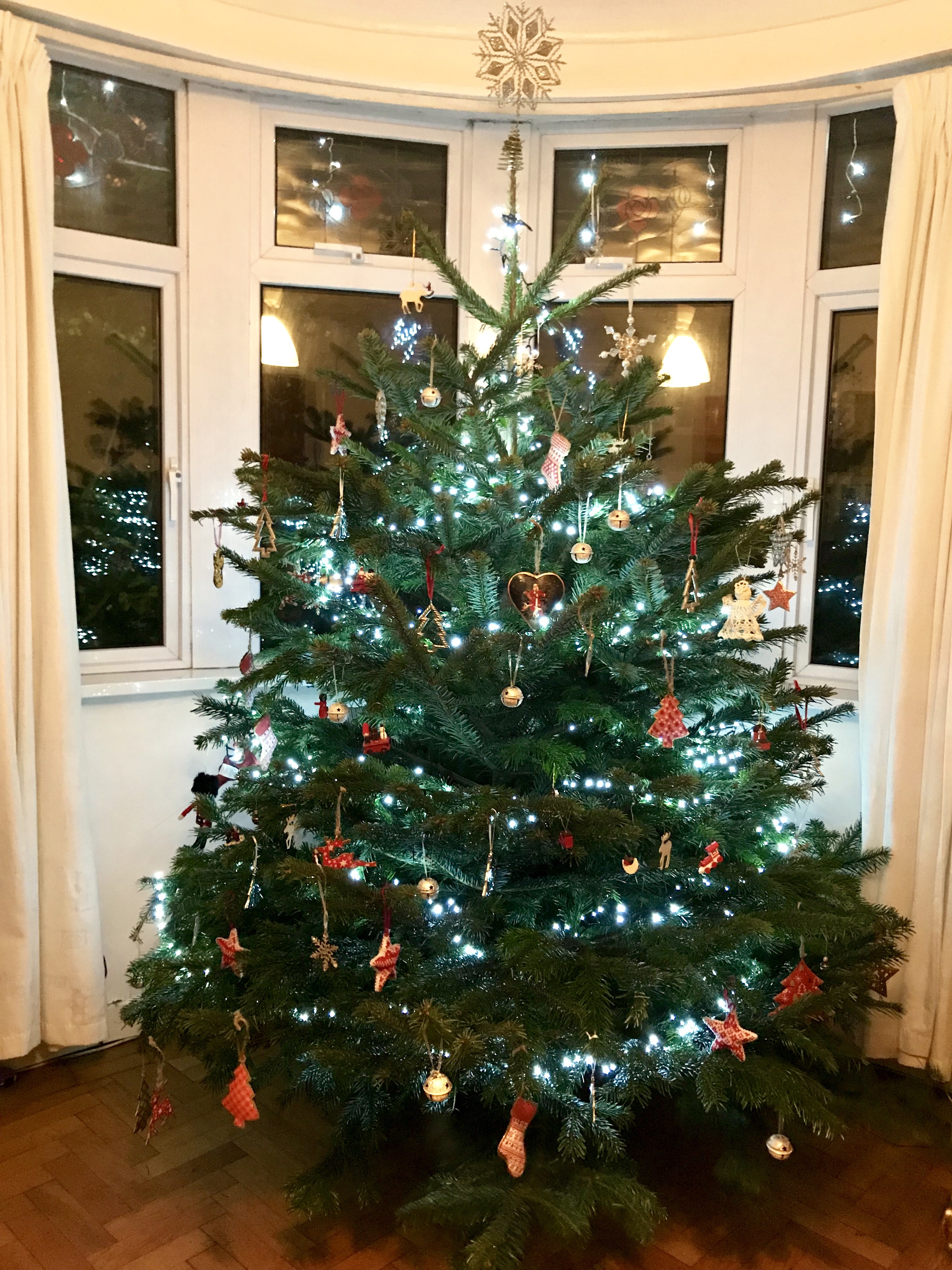 But it doesn’t quite have the same sentimental feeling as our other tree. My plan is to always keep the ‘family’ tree. Some of the decorations I’ll give to my three when they move into their homes and buy their own Christmas tree. But the rest I’ll keep.

They might well cringe as teenagers at the tacky decorations but hopefully when they’re adults they’ll realise the sentimental value and say things like “wow, I can’t believe you still have these. I used to love this one as a child”.

And Mary the Fairy will still sit at the top. Right where she belongs.

I asked some other parent bloggers what’s at the top of their tree. Here are some of their lovely stories.

What’s at the top of your Christmas tree? Do let me know in the comments below on the Cardiff Mummy Says Facebook page or by tweeting me on @cardiffmummy

You can read all my posts about Christmas here. 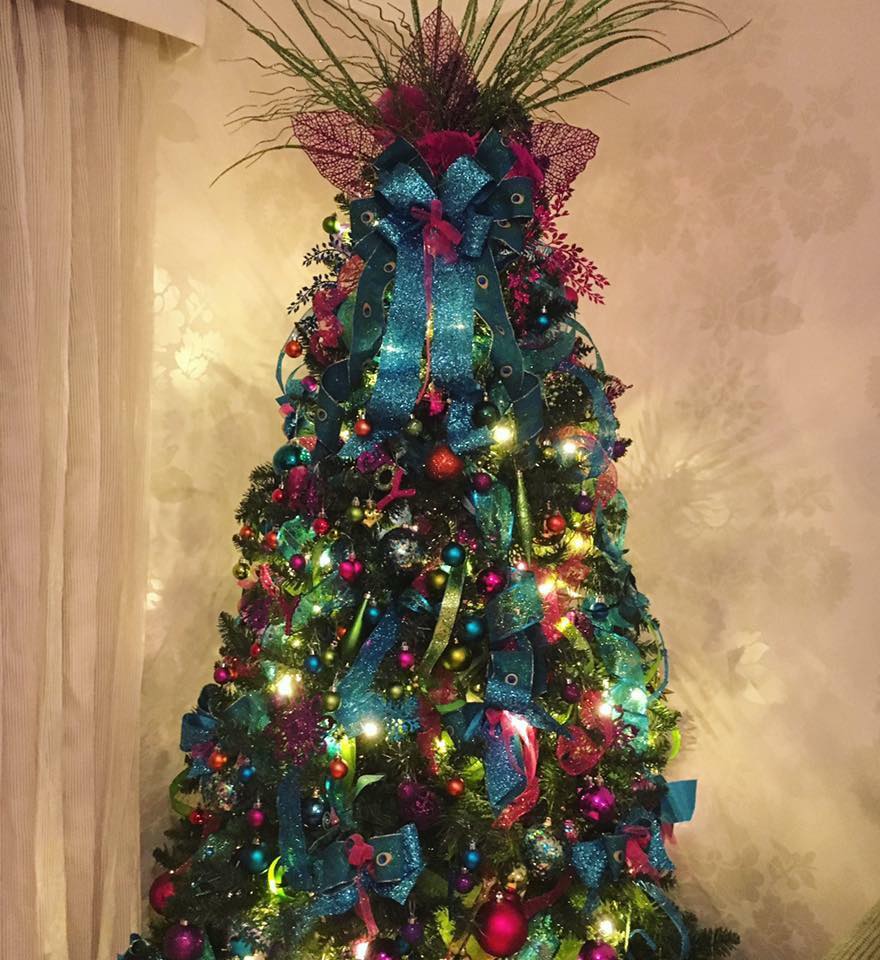 “We have a spray and a big bow. I got lost on YouTube a couple of years ago and found myself watching Christmas tree decorating tutorials. Many beautiful ones seemed to have sprays rather than a star or angel so I set about replicating. We have a separate tree for the children with their crafts and mismatched ornaments but this means I can totally indulge in my perfectionism by having a ‘grown up tree’. I love having something a bit different… it gets bigger and better every year. I had the bow made to specification but I put it together with the sprays.”

Emily of A Slummy Mummy 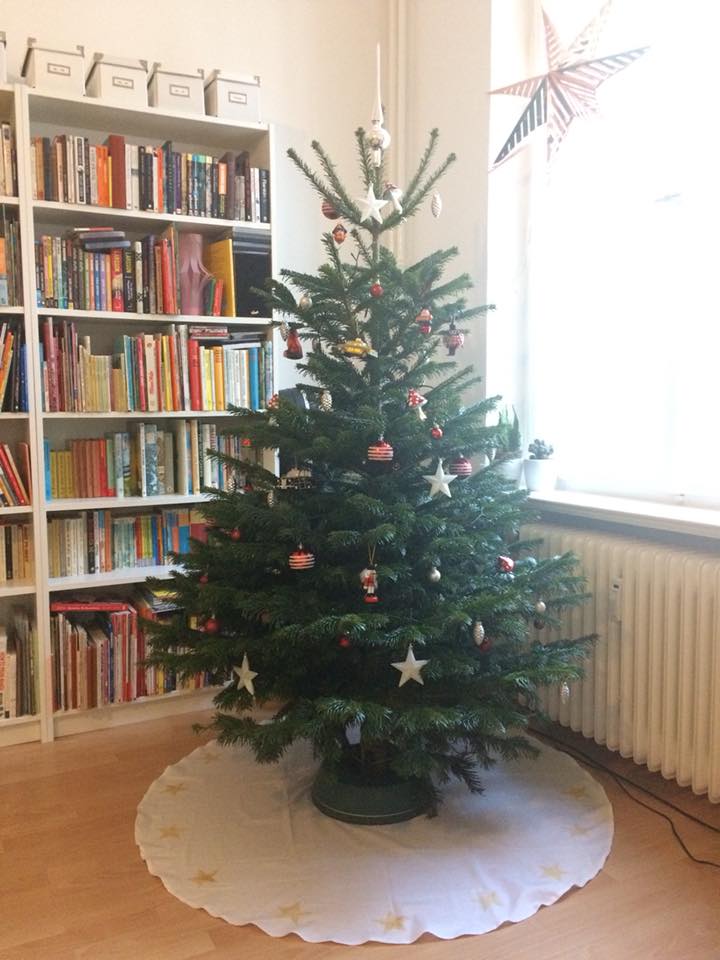 “We always have a ‘Christbaumspitze’ at the top. In English that literally translates to ‘Christmas tree point’. It’s a tree topper made of glass, and is popular in Germany where I am originally from. Until two years ago, we used my late grandmother’s tree topper, but then my five-year-old sadly broke it so we bought a new one in Berlin that looks very similar.”

Jenni of The Bear and the Fox 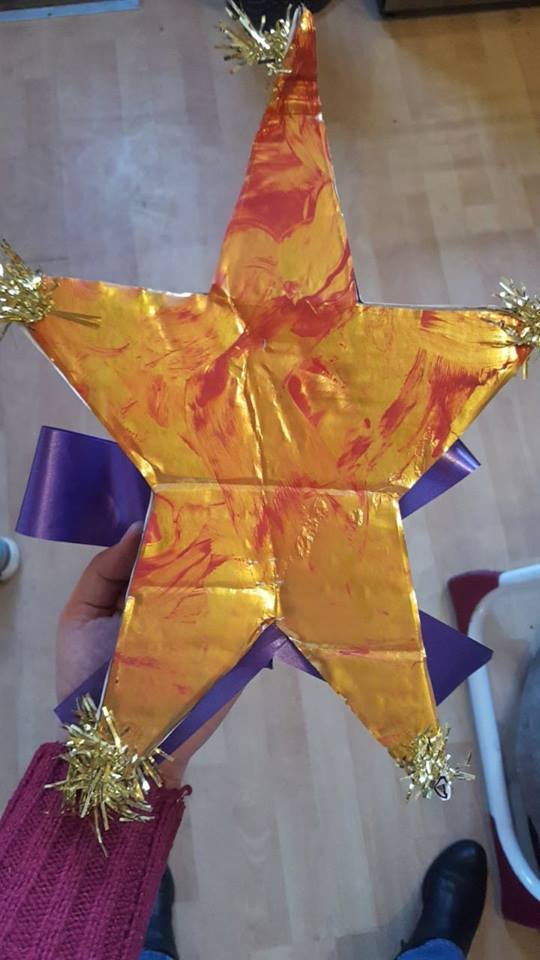 “My little one ‘made’ this star when when she was one. It had us in stitches; we were at a baby session and the little ones were crawling around in the paint and paper until my little one placed a nicely painted handprint on my friend’s little boy’s bum. This will be the second year it graces our tree.”

Nicola of A Blogs Life 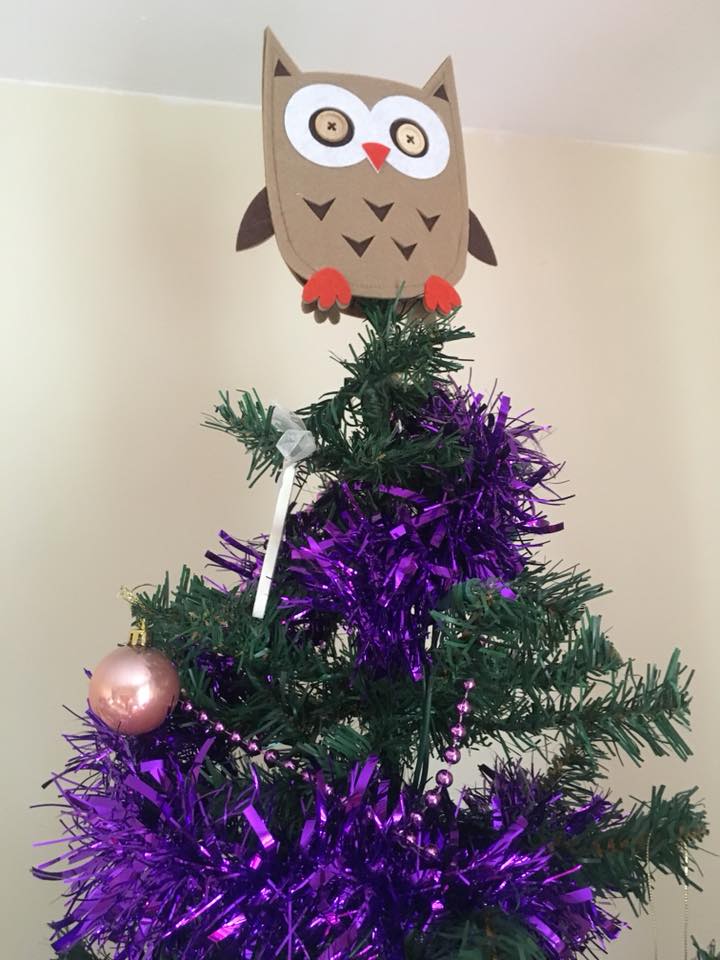 “I have an owl on the top of my tree. I was homeless for 10 months and had to completely rebuild my life after a really toxic relationship and recovering after months of refuge life. I bought this tree topper the first Christmas after moving into my home with my daughter and it’s proudly sat on the top for the last five years, reminding me of how far we’ve come and how much we have to be thankful for and celebrate this time of year.” 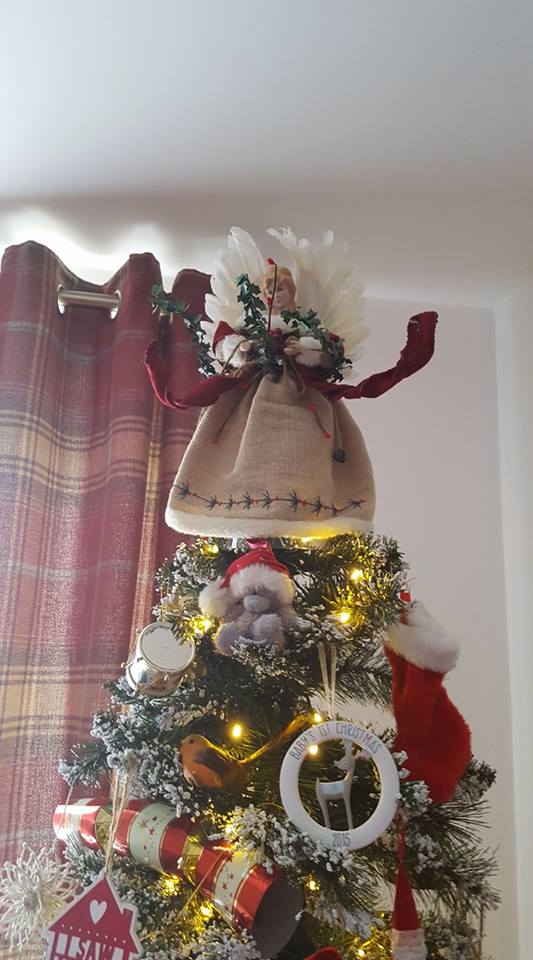 “We have an angel. We got married in Austria in December and we bought this on our return. She’s been up every year since. This year we will have been married for nine years.” 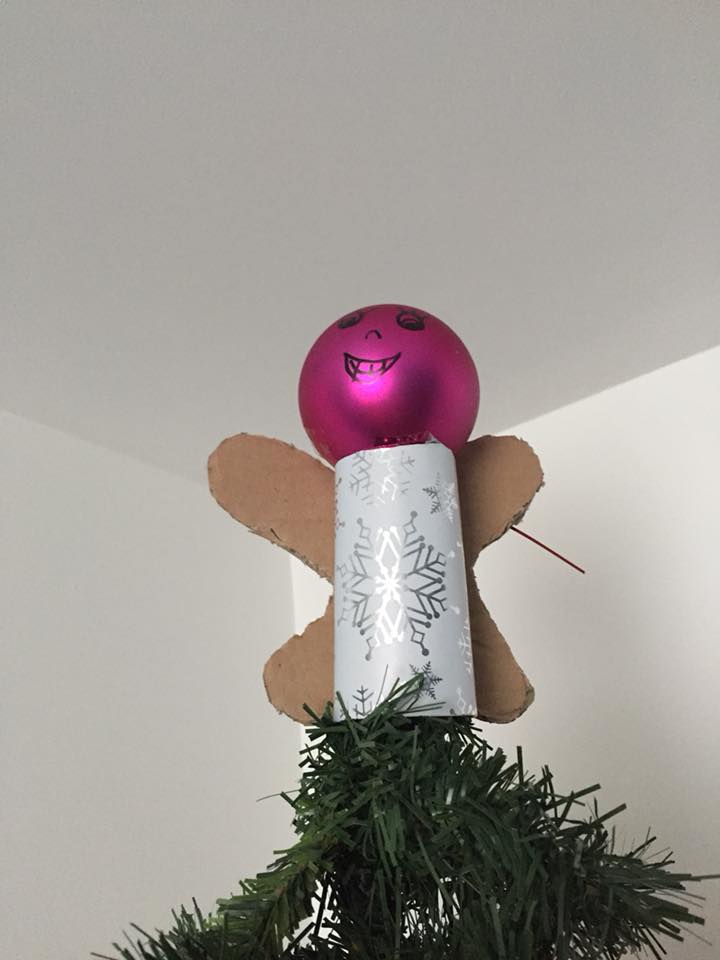 “We have this little guy. We forgot to buy something for the top of the tree on our first Christmas in our new house so we made a temporary one out of things found around the house. The plan was to replace him later but we grew so attached that he still sits at the top of our tree five years later! It was a grown-up creation, pre-child. It started off as a bit of a joke but it’s seen so many lovely Christmases now that I don’t want to replace him (and hubby would not be a happy bunny even if I tried!).”

Nadine of Then I Became A Mum 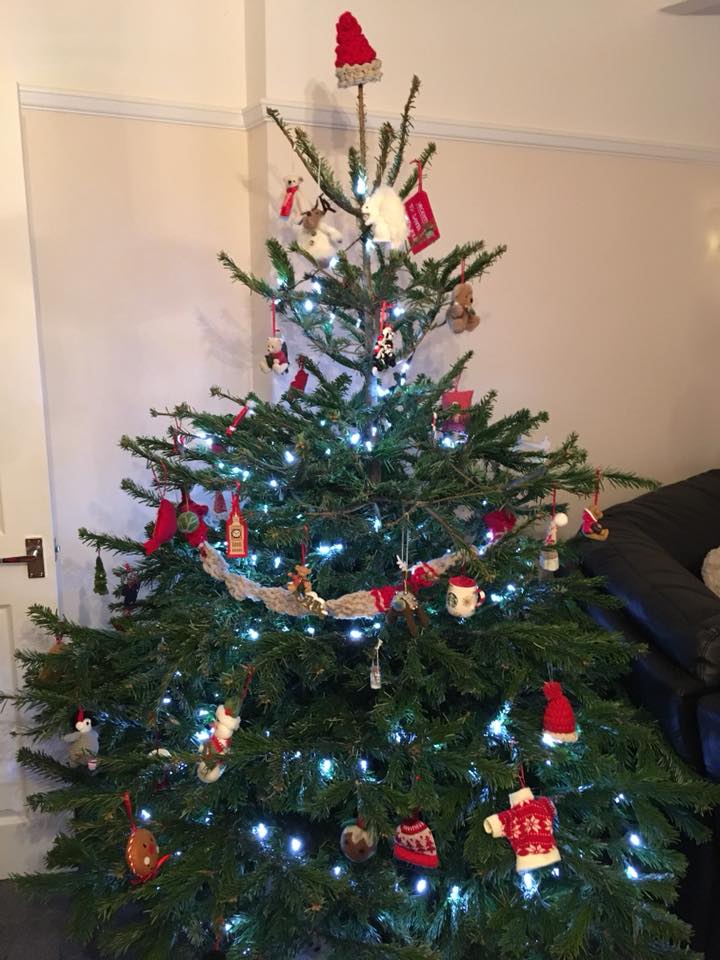 “I knitted a Santa hat for the top of ours. I didn’t like our sparkly star as it didn’t suit the other decorations. I’d wanted to do it a few years ago but it’s taken me ages to master knitting to a degree that I felt confident doing it. It will be on our tree for a fair few years now though. All our ornaments are from years of collecting and all are brought with special memories. With our son being autistic he doesn’t cope well with the glittery ones – so knitted here we are!”

Becca of A Mum Doing Her Best 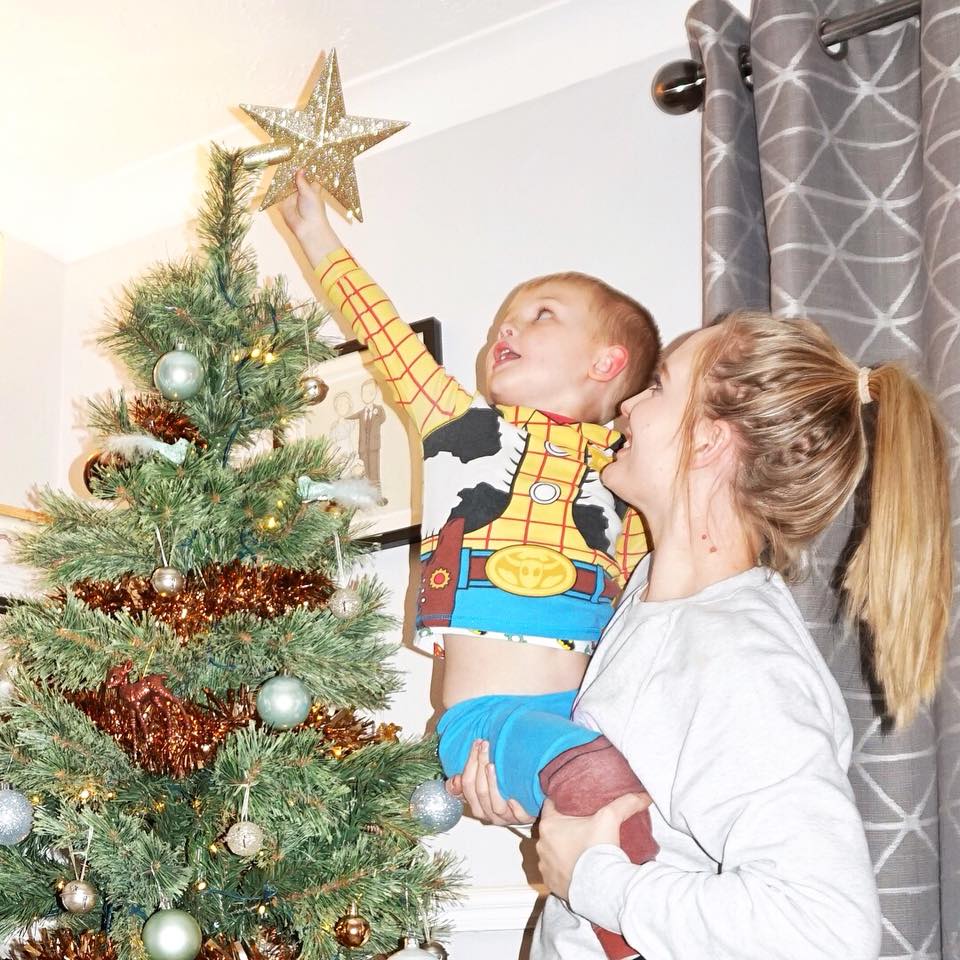 Alex of Lamb and Bear 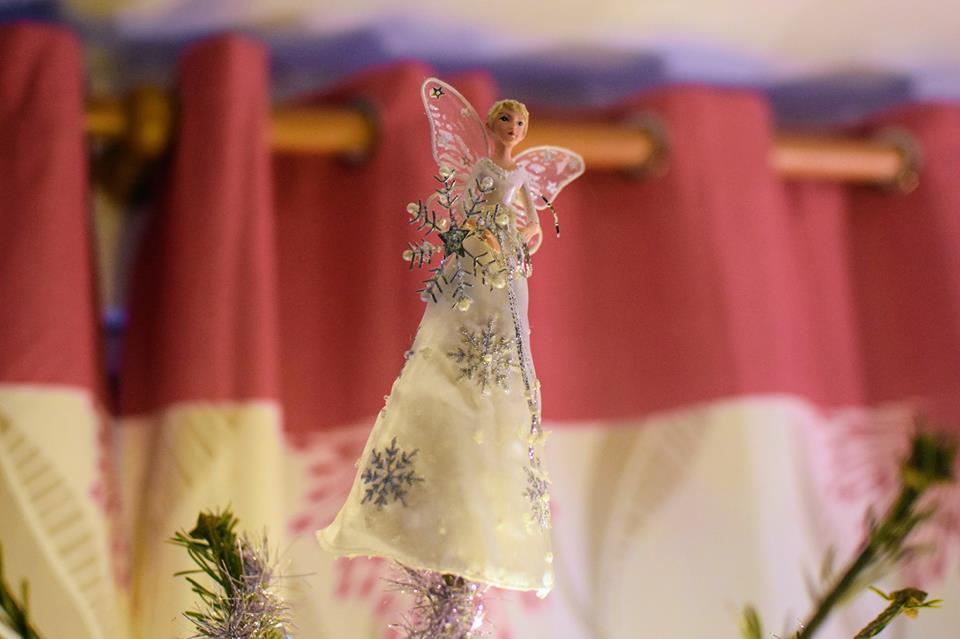 “We always have a fairy on the top of our tree as that’s what I had when I was a child – I can even remember making the toilet roll Christmas fairies of the 80s! Two years ago we had to replace our original family fairy as she was beyond repair, so we now have more of an ‘angel fairy’. Each year I imagine that Dave will lift the youngest to place the fairy on top of the tree and I’ll get a lovely photo but it’s never the same in reality. When this role passed to Izzy she really didn’t like being lifted over the tree and sobbed and sobbed that she didn’t want to do it but then had a tantrum when her next older sister did the job! Fingers crossed we nail it this year!”

Claire of Diary of the Evans-Crittens

“We have a plain gold star on ours – we’ve had it about seven years. Growing up it was the same so I am following tradition. My husband used to put it on the tree but since we’ve had children we take it in turns every year between the boys. It’s a simple gold star but lovely all the same.” 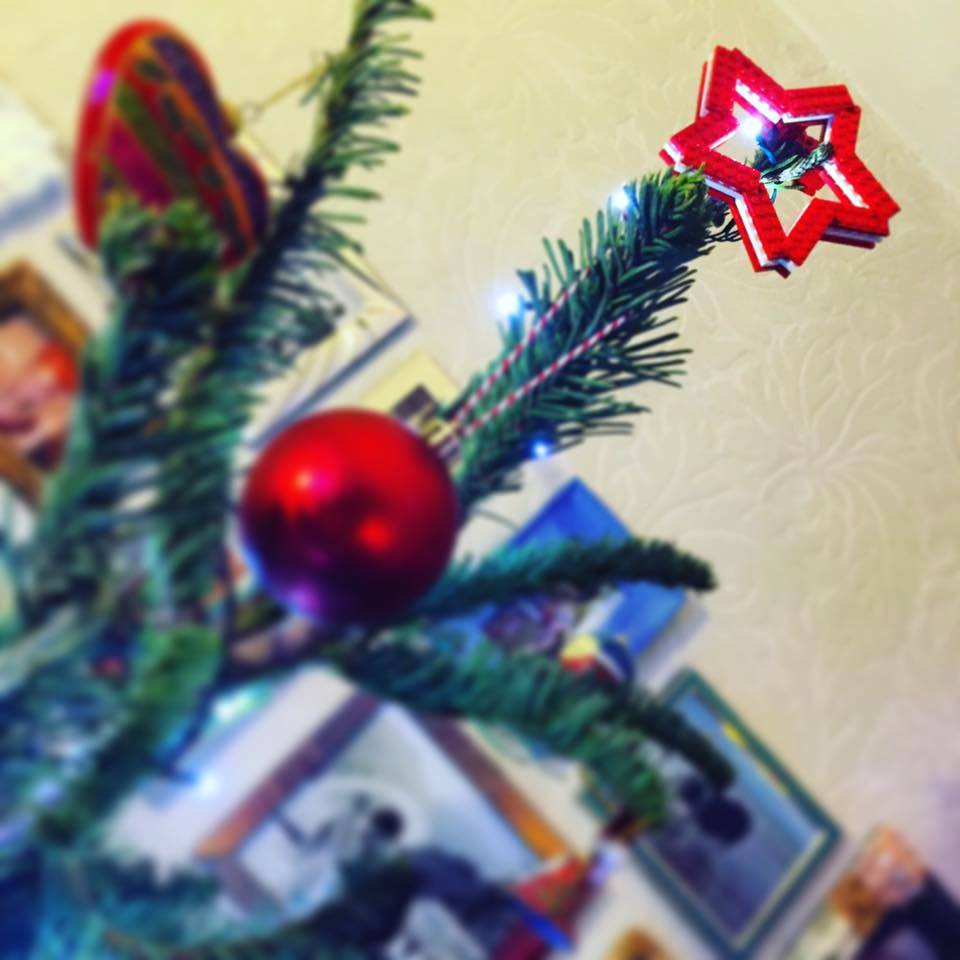 “We had nothing to put on our tree last year. We noticed when we were decorating it. My husband said ‘gimme a minute’ and strode off to the office for 10 minutes. He came back with a Lego Christmas tree star. We will of course be using it again this year!”

Lynne from Glasgow With Kids

Homepage » Christmas » What’s at the top of your Christmas tree?