We have a special visitor this half term. The teddy from Littlest’s playgroup is with us for the week. The whole week! You know, the bear (or in our case a dog) which gets given to the child who has achieved well that week. The bear which you have to photograph doing fun and exciting things and then stick the evidence in ‘the book’. You know that every child gets the bear at some point during the year – but it’s always nice when it’s your little one being rewarded. Until the bear comes home that is and you see a host of amazing photos of him or her skiing in Austria or meeting a celebrity or climbing to the top of Snowdon and you realise you have nothing at all planned that weekend other than the weekly food shop. Oh, crap.

With three young children, we have had our fair share of bears from nursery and school and various out of school activities who also got in on the game.

This half term is my youngest’s first experience of bringing the class mascot home though. He was super excited when he showed me the bag, the book and the colouring sheets.

Until he actually looked at the cuddly dog.

“It’s smelly and dirty,” he said, and buried it at the bottom of his washing basket.

It took me three days to decide whether to wash it or not. I was so worried it wouldn’t survive the machine. Eventually I gave it a good scrub in the sink and hand dried it with a hair dryer.

Washing the dog, I was reminded of a friend of mine whose child dropped their class bear in the toilet after doing a poo and before flushing. She washed him in the machine and posted photos on Facebook of the bear getting over the trauma with a stiff drink or two. Another friend lost their bear on a day out and had to buy a replacement. She bundled it into the bag, handed it over and never said a word!

I asked some of my parent blogger friends for any of their disastrous class bear stories. I was crying with laughter reading their responses so I hope you enjoy the anecdotes below.

Do share your own stories in the comments below, on the Cardiff Mummy Says Facebook page, or you can tweet me on @cardiffmummy I’ll add the best ones to the article.

All photos are posed by models! 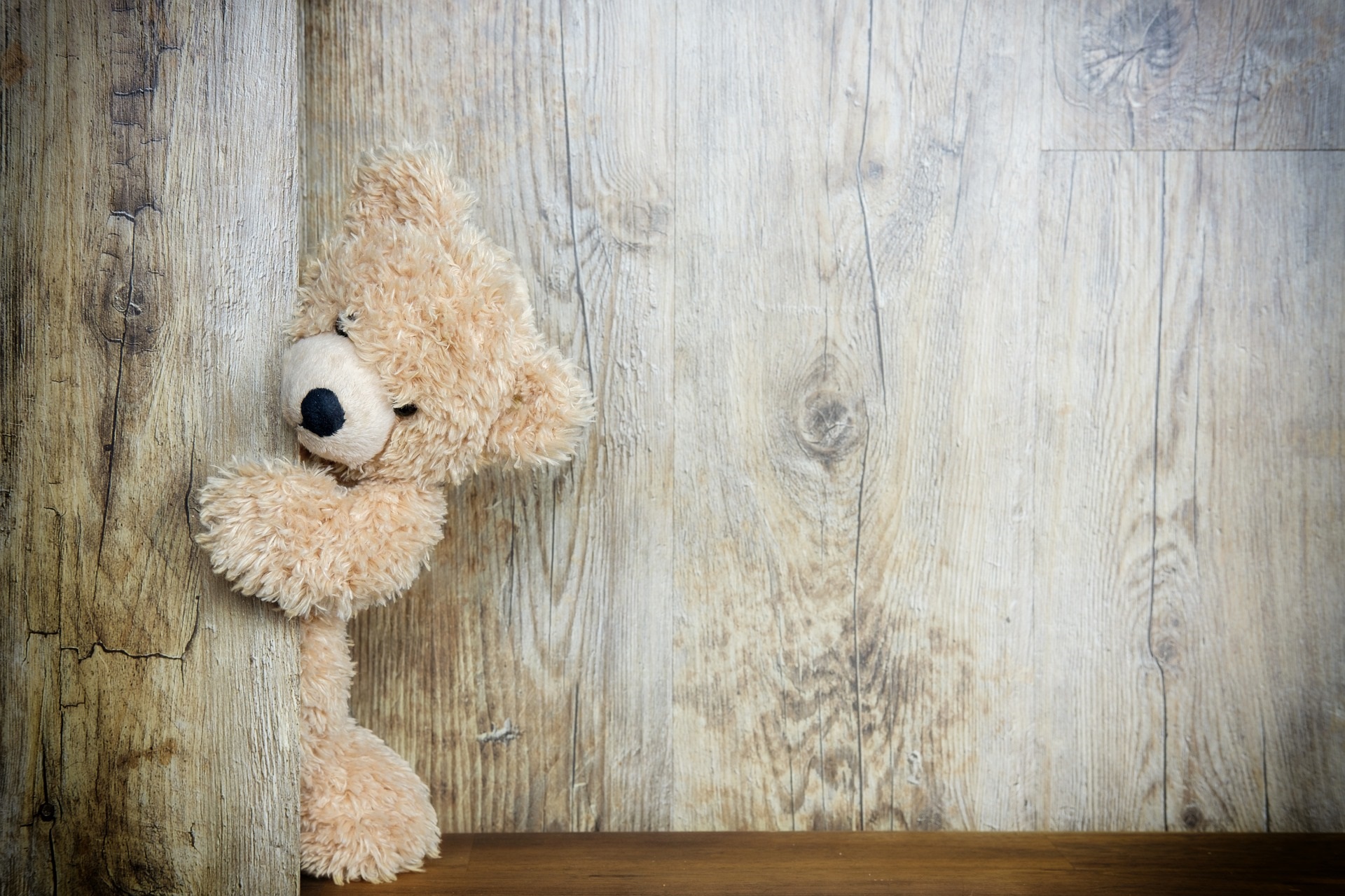 “The first time we had the nursery bear we went to so much effort. My husband took it to the hospital where he works and pretended to x-ray it, I’m a journalist and so took it to the newsroom, we went to gymnastics and the park – something every day. On the final Sunday I stuck the photos in the book, left the room to get a pen, and came back to find my son scrawling all over a little girl’s photo with a red felt pen! I really hope they don’t read back through the book!”

“When my sister in law brought the class bear home we thought it would be good to take it to the zoo. My father-in-law leaned over the lemur enclosure so we could get a good picture but dropped it and the lemurs swarmed it! We had to get a zookeeper to get him back! They put up a bit of a fight and the zookeeper said they can be quite aggressive over stuff so he had to get some fruit and distracted them with it whilst another zookeeper rescued the bear. It’s funny now but it was so embarrassing and my sister-in-law was sobbing her eyes out.”

“We had Charlie Bear and we had it over the May half term. We went to Center Parcs. We left it in the lodge. Once we were home and we realised what had happened I had to make a VERY urgent phone call to customer services and explain the situation. The manager of the park kindly sent Charlie via first class post with a few bags of Haribo inside the parcel and a little note for my daughter to put in Charlie Bear’s book. A super outcome.”

“The first morning we had Daf the sheep the toddler somehow managed to knock a full cup of cold espresso all over the very white sheep. He had to take an emergency trip in the washing machine and I spent the entire time praying it didn’t fall apart! The teachers thought it was hysterical and wanted a photo of it in the book.

Sarah of The Herniman House

“My friends did an x-rated version for the teacher who thought it was absolutely hilarious. Mr Thomas the Bear had lots of fun with other teddies, wine and beer the weekend he went to stay with them. It was so so funny but definitely only suitable for certain teachers.”

“We took ours skiing. He skied naked, strapped to a ski lift, drank his way around the table!

“We were given Jeff Ted to look after for the weekend. However, we went away and left him at home. So we spent Sunday evening attempting a feeble effort to make it look like he came with us. A trip to the swimming pool was recreated by him sitting on a tiny inflatable in the bath.”

“My eldest loved having the bear home for a week, my youngest – not so much. He wasn’t fussed about him in the slightest! I wrote a letter from the bear on my blog… “My teeth have not been brushed once. I have been in the same clothes nearly the whole time (bar the first day when I got changed into my pyjama top but with NO bottoms – the indignity!) AND have you not noticed the weather change? I have been in t-shirt and jeans ALL week! I’ve not been fed or played with – it’s just pure cruelty to bears!!

“Ours was a small dog – it didn’t survive too well once our dog had got hold of it though! The little dog was ‘injured’ in the play (think tug-of-war) so we had to perform a minor operation with my sewing kit. My son was fine about it actually. He’s autistic so was fairly pragmatic about the whole thing, “It’s OK, it’s not a real dog.” I mentioned it to the school and they didn’t seem bothered at all. Phew!”

Ann of Rainbows are too Beautiful

“When my youngest son took the bear home, my older son for some reasons wanted to play with it more. They had a fight about it which eventually led to a tug of war that ripped the bear a tiny little bit. I had to do a little stitch. Hopefully the teachers didn’t notice.”

Veronica of My Parenting Journey

“We had a dragon in year one and that also went straight in the washing machine and it transpired it was purple, not grey! The best bit was looking through the book that it was sent home with and nosing at what other kids had done with the dragon (and what their houses were like!).”

Fran of Back With A Bump

“I got Del the Dragon two days after having a knee op and being in a wheelchair – typical hey! In fear of ours being the dullest entry ever in the diary, I took a photo of my son and Del and photoshopped it on to other photos. The weekend she stayed they met Obama in the Oval Office; went in to space; lifted the 1966 World Cup. I’m guessing it was the best made-up weekend ever. I had no response from the school. I had to check with my son it had been read out. Perhaps I’ll be getting a talking too at parents’ evening. My last entry when we got Chester the Bear was quite sarcastic as well. Maybe they know what to expect now. We have the pleasure of Dyl the Dragon soon (Del’s brother). It’s never-ending! I’ve got to get my thinking cap on for that one.”

Melanie of Life at Number Eleven

“We had the bear on the very weekend we were moving house. The only place for it to go was the washing line as everything else was packed. Funnily enough we were never given the bear again after the picture made its way back to school.”

Kati of How to Rock at Parenting

“I did a version for the teachers… something like the book may tell you on day 1 I did…. But I didn’t get out of the bag. Day 2 I was chucked on the floor for a photo before heading to a party where I got drunk on Jäger. Day 3 I died of a hangover all day and stayed in the bag. The teachers laughed. They said they couldn’t read it out to the kids so put it in their teacher area.