I’m sure I’m not the only parent who very rarely sees ‘grown-up’ films in the cinema these days. Pretty much everything I watch on the big screen is animated and with a U or PG rating.

Some films, I find myself clock-watching and willing them to be over. But then every so often, I find myself genuinely loving a film as much as my children, completely caught up in what I’m watching.

Such is the case with Trolls, a vibrant explosion of day-glo colours and happy disco tunes. It’s admittedly a little cheesy at times, but has a lovely underlying theme of finding happiness within, meaning you can’t help but leave the cinema with a warm and fuzzy feeling.

The film – which we saw this morning at the Odeon in Cardiff Bay as part of our blogger ambassador role with The Red Dragon Centre – is based on the familiar Good Luck Trolls, created by Danish fisherman Thomas Dam in 1959. His dolls with the rounded bellies, enormous grins, and brightly coloured hair became a worldwide sensation during the late 1950s and early 1960s, and have had a few revivals in the ensuing decades.

The film introduces them as “the happiest creatures the world had ever known”; they love to sing and dance, and every hour they stop whatever they are doing to hug each other.

In fact, the trolls are so happy that a group of miserable ogres called the Bergans believe the only way they can be happy is by eating the trolls. They do this once a year at a celebration they call Trollstice. In the opening scenes of the film, a toddler Prince Gristle is set to eat his first ever troll, the king’s daughter Poppy – until we discover the trolls have escaped.

Fast forward 20 years and the ever-optimistic and positive Poppy (voiced by Anna Kendrick) is all grown up and organising a huge party to celebrate the anniversary of their freedom. Despite warnings from Branch (voiced by Justin Timberlake) – an unusually miserable troll who won’t sing or dance and is grey and void of colour – that if he can hear them a mile off, so can the Bergans, the party goes ahead. Unsurprisingly the trolls are discovered and several of them caught by the menacing, cleaver-wielding Chef (Christine Baranski), who was banished by the Bergens for allowing the trolls to escape two decades ago. 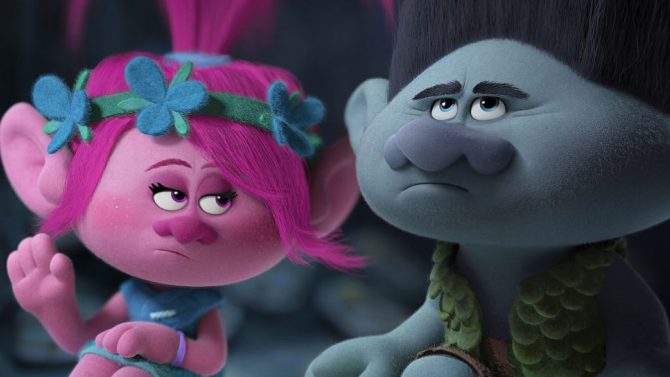 Poppy and a reluctant Branch set off to rescue their friends, and what ensues is a real voyage of self-discovery for several of the characters, including Poppy and Branch, as well as Bridget (Zooey Deschanel), the lowly scullery maid who has fallen in love with Prince Gristle. She’s sensitive to the plight of the trolls, who give her a real Cinderella-style makeover, complete with rainbow-coloured hair and roller boots.

The film ends with the realisation that eating trolls won’t make you happy; it’s something you have to find from within. Yes, it’s somewhat predictable but it’s well-executed.

Other celebrity voices include Russell Brand, as Creek, a hippy-esque, peace-loving troll who ultimately sells out his friends to save himself; as well as James Corden and Gwen Stefani. Not that my children have a clue who any of them are, but it’s great to see such names involved in a children’s film.

With Justin Timberlake as executive music producer, the soundtrack is brilliant. Upbeat and catchy, I really wanted to get up and start dancing myself. Musical highlights for me included Justin Timberlake’s Can’t Stop The Feeling (watch above) and a mash-up of Move Your Feet, D.A.N.C.E. and It’s A Sunshine Day. There were a couple of unlikely musical numbers in the form of Simon and Garfunkel’s The Sound of Silence and Lionel Richie’s Hello, sung by a lovelorn Bridget, and Cyndi Lauper’s True Colors sung by Branch, which worked so well in the context of the film.

Little Miss E, my 6¾-year-old oldest child, enjoyed it overall but found a couple of parts scary. She buried her head into me on a few occasions when the trolls were under threat, but she is definitely sensitive to even the mildest threat or danger in a film. Her brother Little Man O, age 5, had no such worries and thought it was “really brilliant”. I think if he’d been a couple of years older, he might have presumed the film was too girly, although I don’t think it is; there’s plenty for boys to enjoy too. Toddler Boy I, 2½, loved it and was up and dancing throughout. At one point he got a bit restless and started shouting “troll, troll” repeatedly at the screen, but I managed to bribe him with some breadsticks and he watched the rest no trouble.

Perhaps the only downside is that my children now want to buy all the Trolls merchandise. DreamWorks certainly didn’t miss a trick by buying up all the merchandising rights for the toys, did they?

Have you seen Trolls? Let me know what you thought in the comments section below, on the Cardiff Mummy Says Facebook page or by tweeting me on @cardiffmummy 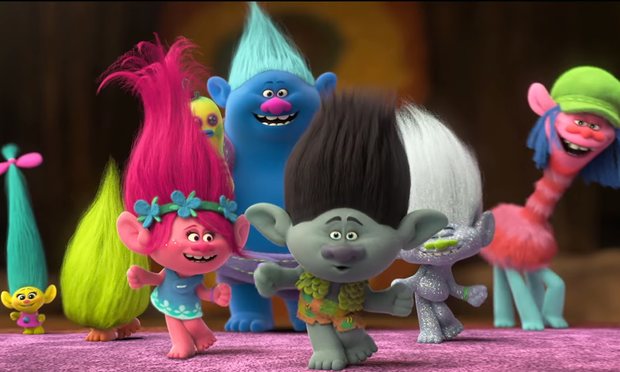 Thanks to The Red Dragon Centre and Odeon Cardiff for hosting us.

If Trolls isn’t your thing, then check out the Odeon’s bargain Kids’s Club. Every morning during school holidays and at weekends, all tickets for selected family favourites are just £2.50. Kids’ Club films showing this October half term include Finding Dory, Pete’s Dragon, The BFG and The Secret Life of Pets.