This roasted red pepper and tomato soup is a real family favourite for us. We make it all the time and it’s loved as much by the children in our house as it is by the adults. In fact, it was my five year old daughter who told me I needed to include the post here on Cardiff Mummy Says. It’s her favourite soup, and as well as asking me to make it this weekend, she also said I should share the recipe here because “it’s really tasty and it’s the best soup ever”. I make a lot of soup, and therefore she eats a lot of soup, so that’s praise indeed!

Roasting the vegetables really brings out the flavours in this soup, and even though it means it takes longer to make, it’s really worth it. It’s also incredibly healthy and packed full of vitamin C. I sometimes chuck in a handful of spinach leaves too, for added iron, or red lentils for protein. We love it served with bread freshly made from the bread maker. 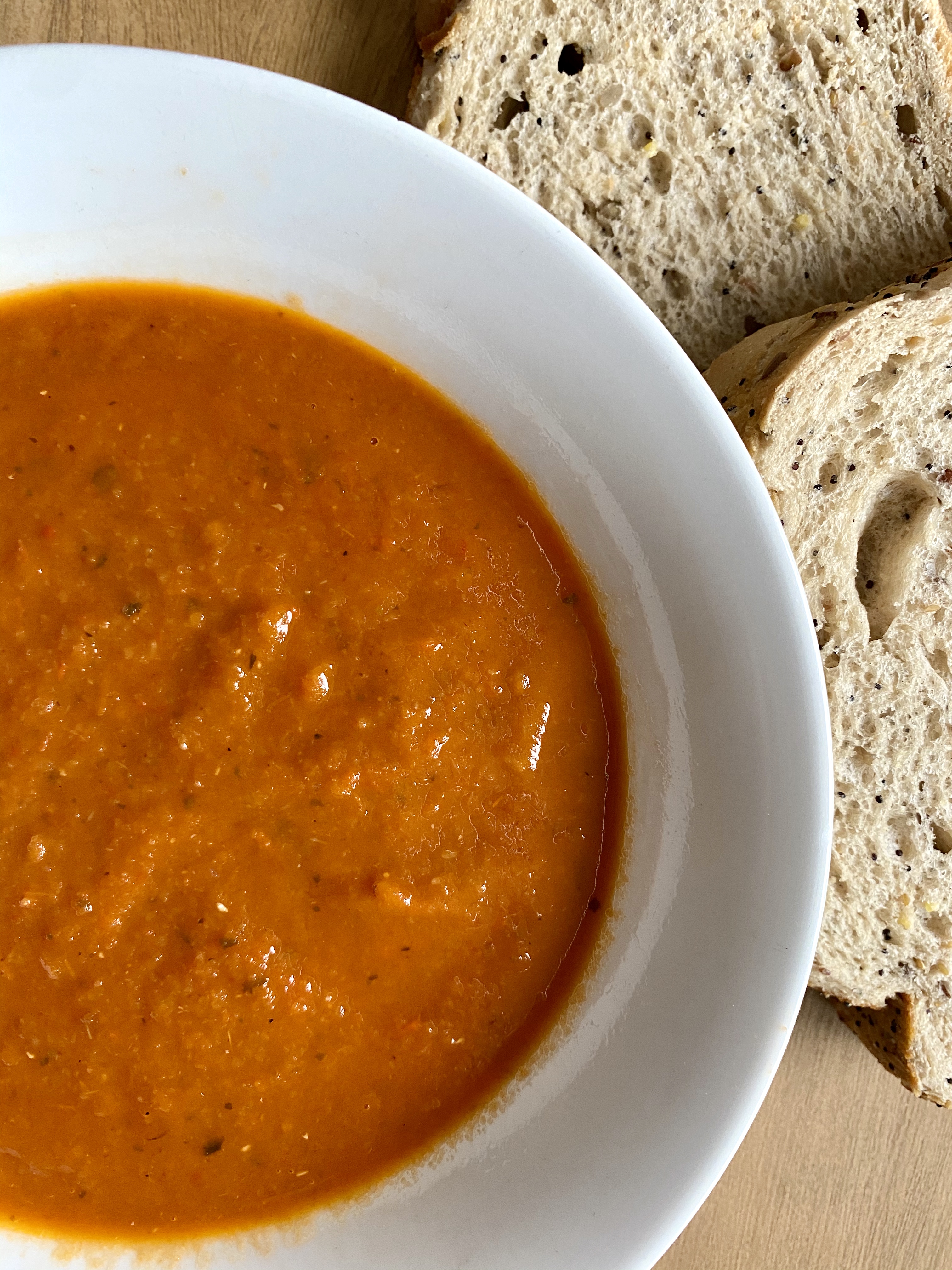 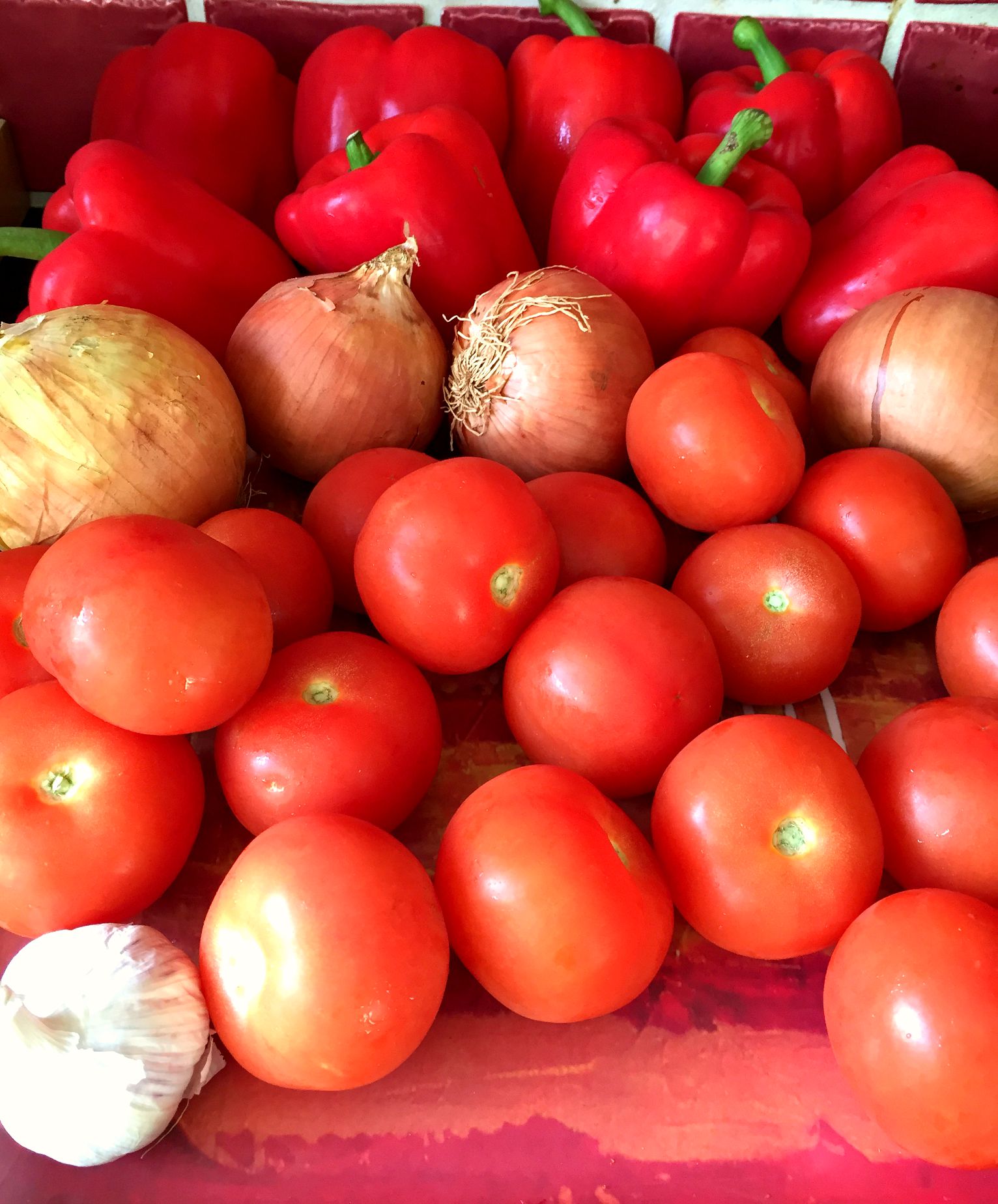 I am a huge fan of batch-cooking, especially when it comes to soup, and especially this roasted red pepper and tomato soup. If you’re going to go to the effort to make one portion, you might as well make five! Every couple of months I make up a massive vat of this so I can freeze extra portions for another day. My quantities vary each time I make this, but recently I bought 15 red peppers, 36 red tomatoes, nine medium red onions, two bulbs of garlic and two bags of fresh basil at Lidl for around £17. It made up enough for five family-sized portions of soup, which I thought was incredible value. The recipe below makes a more manageable four servings. And the great thing about soup is that all the measurements are approximate, so if you want to chuck in more of one vegetable and less of another, then that’s absolutely fine. 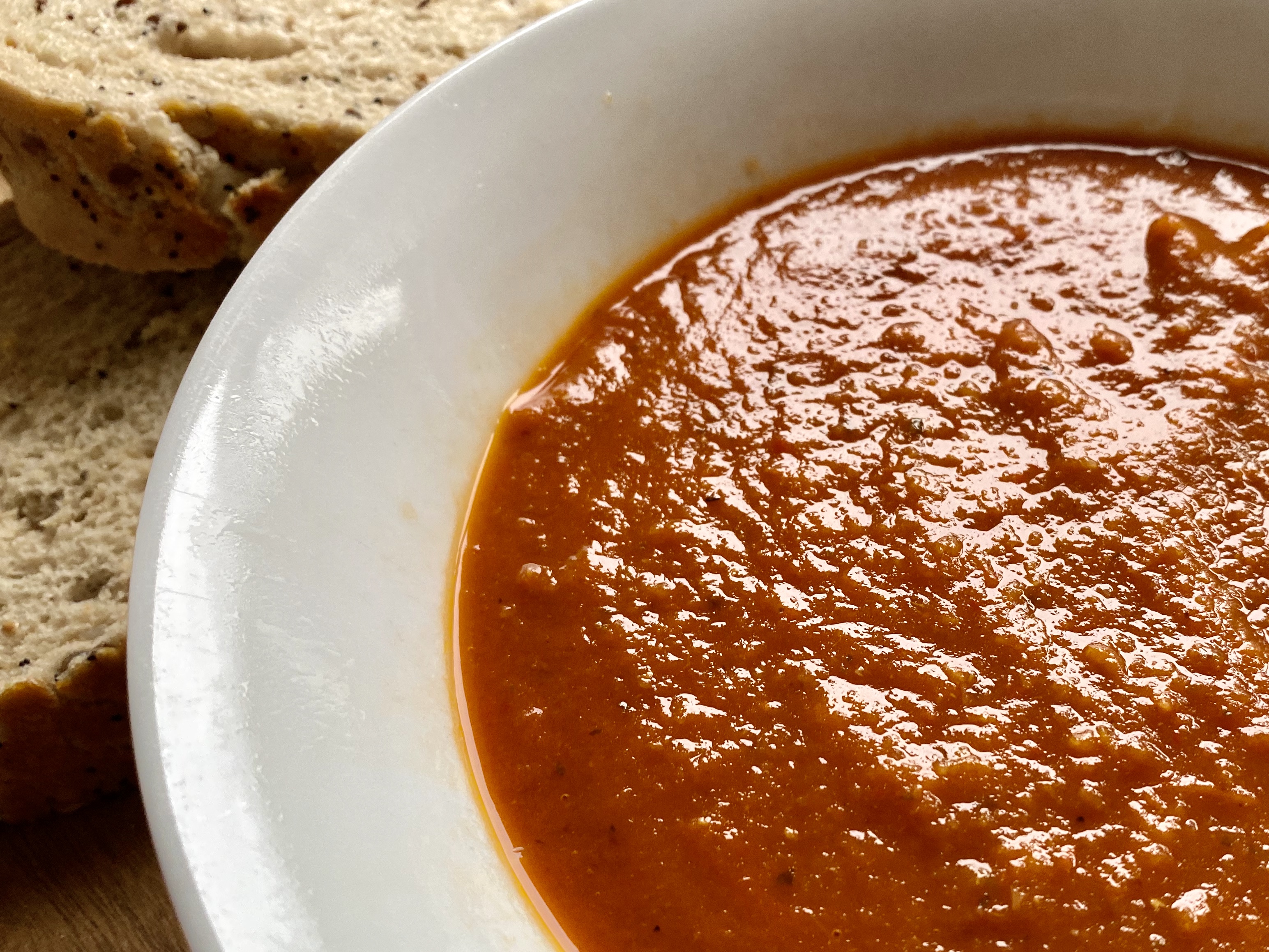 2 red peppers, stalks and seeds discarded and cut into large chunks
6 tomatoes, halved
1 onion, peeled and quartered (red or white is fine although I prefer red)
2 garlic cloves
A handful of basil leaves (or a heaped teaspoon of dried basil)
Salt and pepper
Olive oil
500ml water (you could use vegetable stock if you wanted but I find its flavoursome enough without)

(Optional extra: a handful of spinach leaves, red lentils or both) 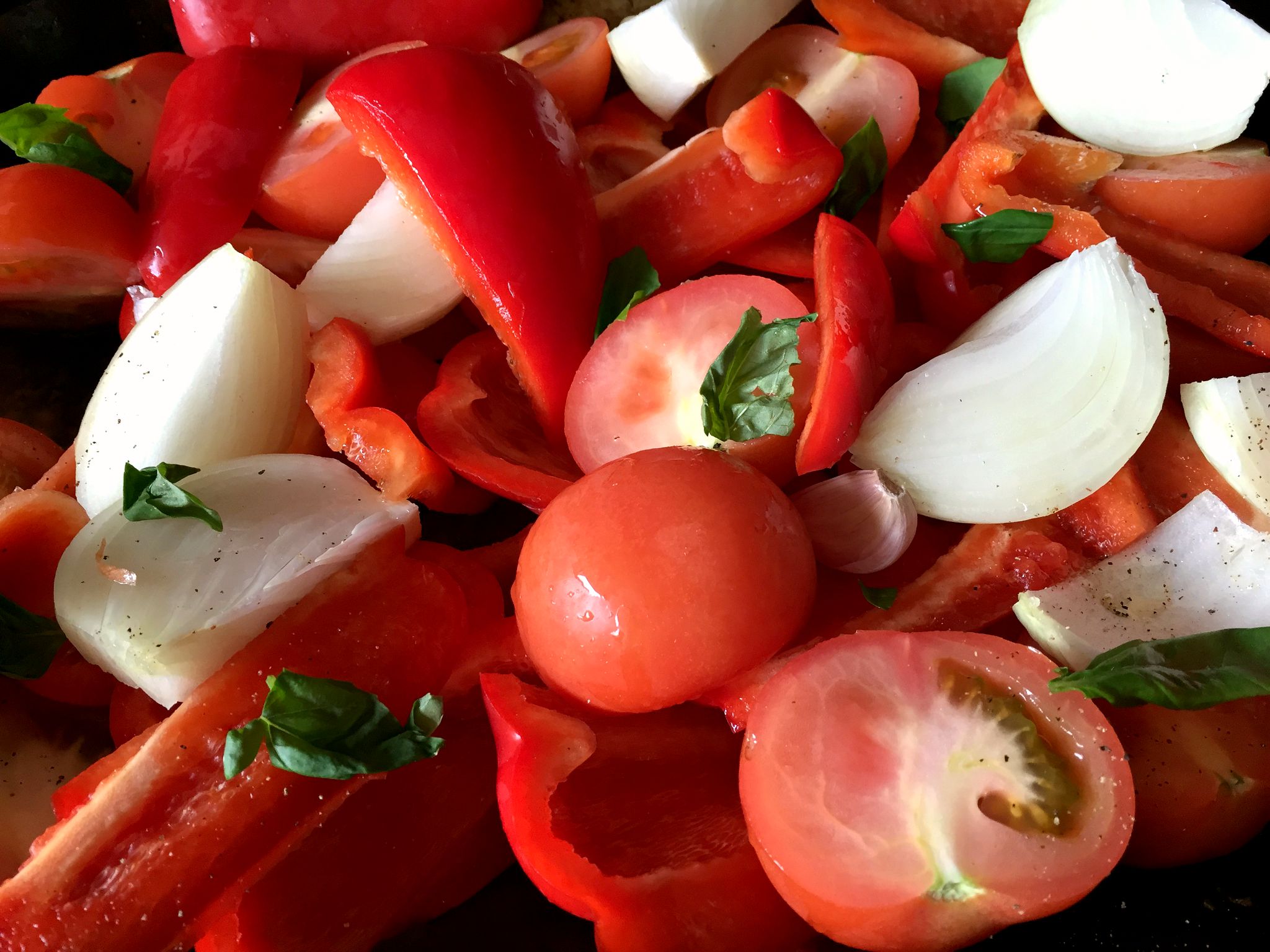 How to make roasted red pepper and tomato soup

2. Arrange the peppers, tomatoes, onions and garlic cloves on a baking tray.

Drizzle with olive oil, scatter over the basil, and season with salt and pepper to taste.

3. Roast for around 45 minutes, turning mid-way through.

4. Pour everything, including the juices, into a large saucepan, and add the stock.

5. Bring to the boil and then simmer for 20 minutes or so.

If you’re adding lentils, pop in a good handful just before you bring to the boil. You may need to simmer for slightly longer until the lentils have burst.

If you’re adding spinach, pop it in after about 15 minutes.

6. Blend until smooth.  (I use a stick blender.) If the texture is too thick, add a little more water.

7. Season with salt and pepper to taste, if needed, and serve.

Let me know if you give it a go, either in the comments below, on the Cardiff Mummy Says Facebook page or tweet me on @cardiffmummy

You can see all of my recipes on the Food section of Cardiff Mummy Says, or follow the Cardiff Mummy Says – This Week We’re Eating board on Pinterest.
You might also like these recipes for leek and potato soup, roasted red pepper stuffed with quinoa, mushrooms and courgettes and home-made baked beans. 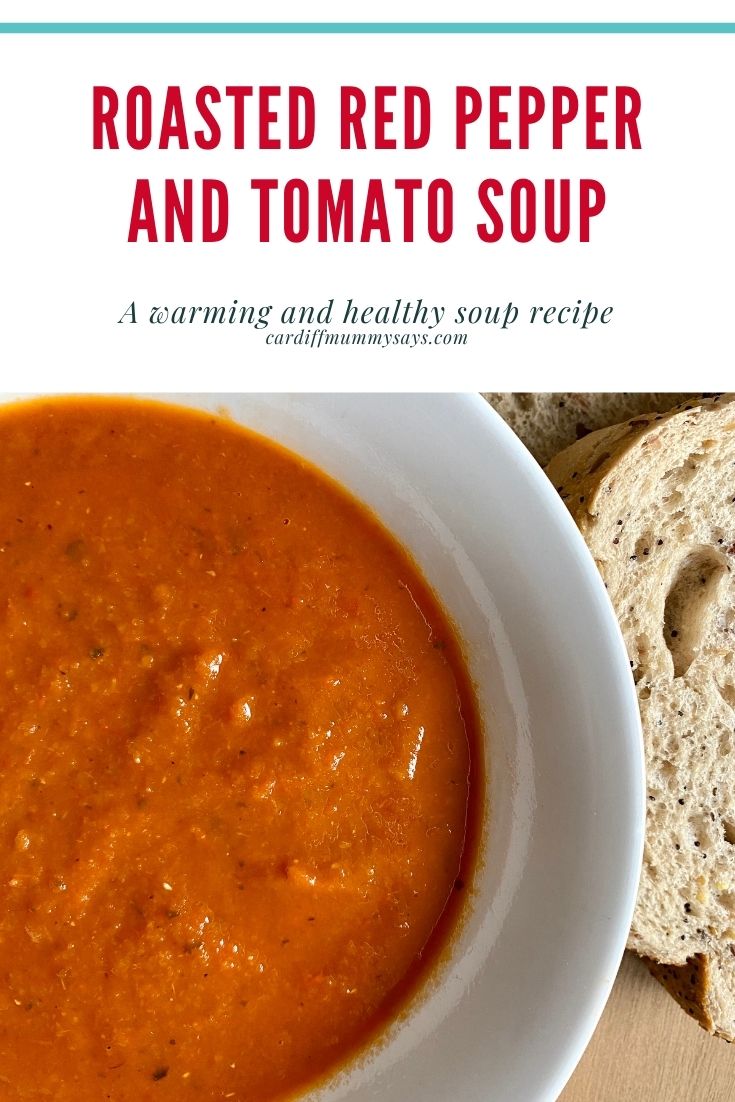