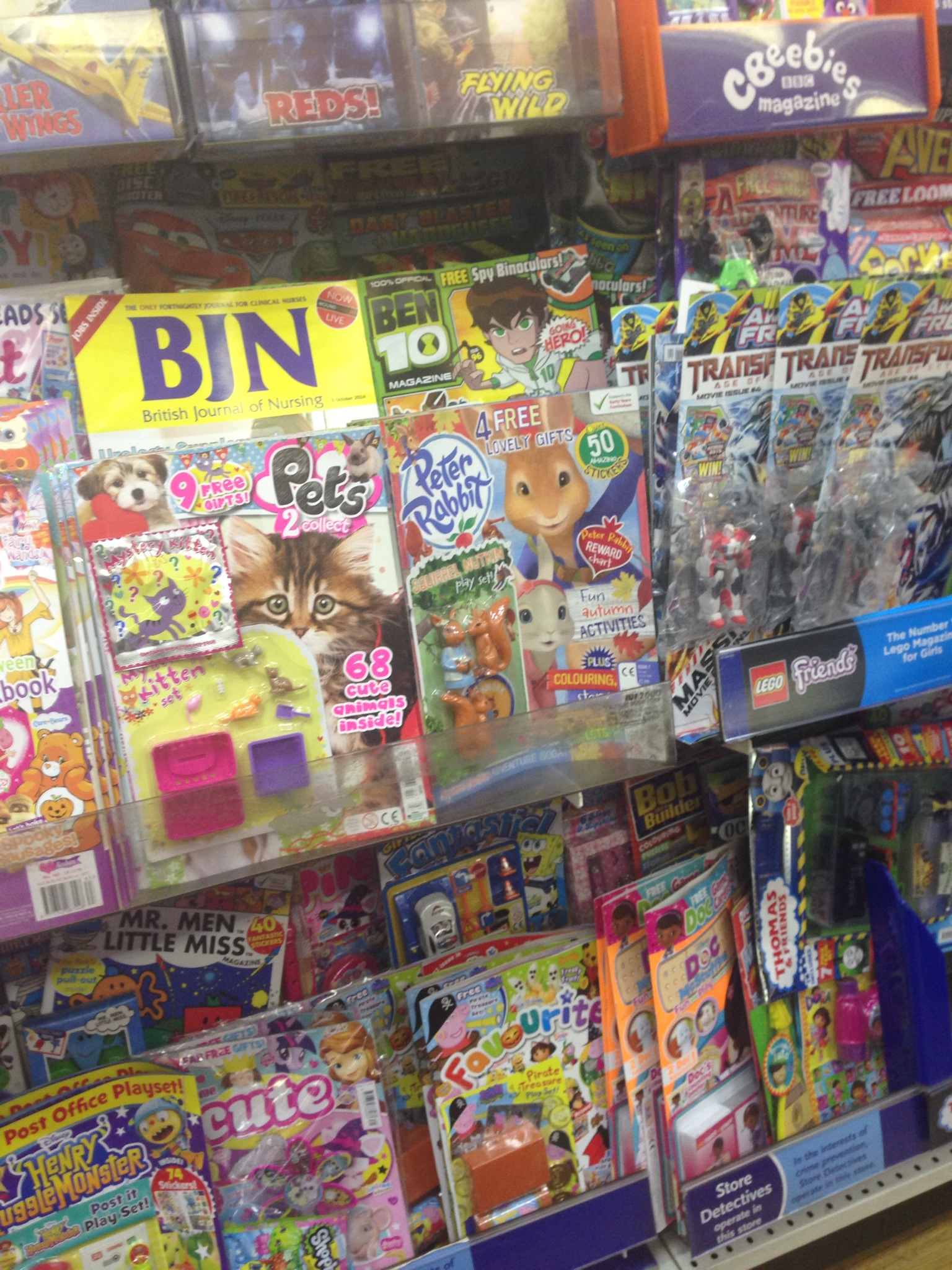 I have a love-hate relationship with children’s magazines.

I love them because I think anything that encourages children to read is a good thing. And as someone who makes a living writing for magazines and newspapers, both print and online, I know that these young readers will be keeping people like me in a job in the future!

However, I get so frustrated with them. The paper is always flimsy and the magazines fall apart after one reading. They’re often based on children’s television programmes and the stories are just condensed versions of what’s already been on the television. They’re often very gender-specific – pink and glitzy for girls, and filled with trucks and knights for boys.

And don’t even get me started on the plastic tat stuck to the front masquerading as free gifts. It drives me mad. Taking it off the magazine in the first place often ends up tearing the cover. It’s always such poor quality, cheap plastic that never does what it’s supposed to and often ends up broken and in the bin. I’ve often said I’d rather pay less for the magazine and have it without the gift, or that I’d rather buy a book that they can keep instead.

So when I heard about the new Storytime magazine – which seemed to be the antithesis to everything I didn’t like about children’s magazines – I couldn’t wait to check it out. We’ve read the first two issues and can happily report it is brilliant and a big success with every member of our family. 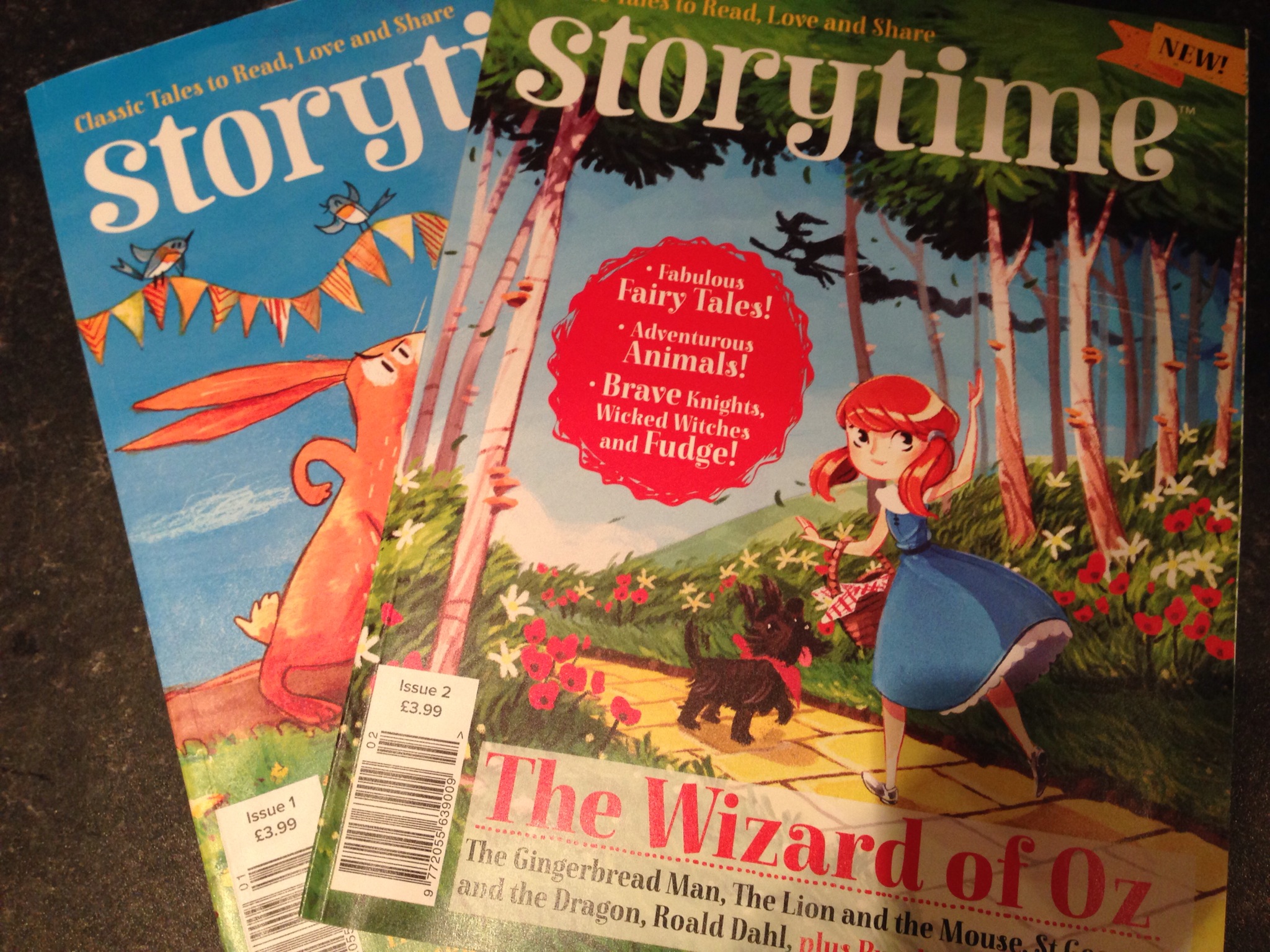 It’s not cheap – £3.99 per issue – but compared to other children’s magazines, it is good value for money.

Firstly, the quality of the paper is fantastic. It’s luxuriously thick and because the whole of the spine is glued, rather than stapled, it can survive being manhandled by youngsters. Everything in it is designed to be gender neutral, so while there are stories about dragons and fairies, the illustrations (which are all incredibly beautiful and detailed) and the design don’t conform to stereotypes at all.

The text is clear and big, and the editors never try to cram too much onto the pages, making it easy to read and not too overwhelming for little ones.

The content is a mixture of stories and rhymes, with a few puzzles and activity ideas. So far, the stories have mostly been classics, retold for younger readers, or extracts from longer children’s books. 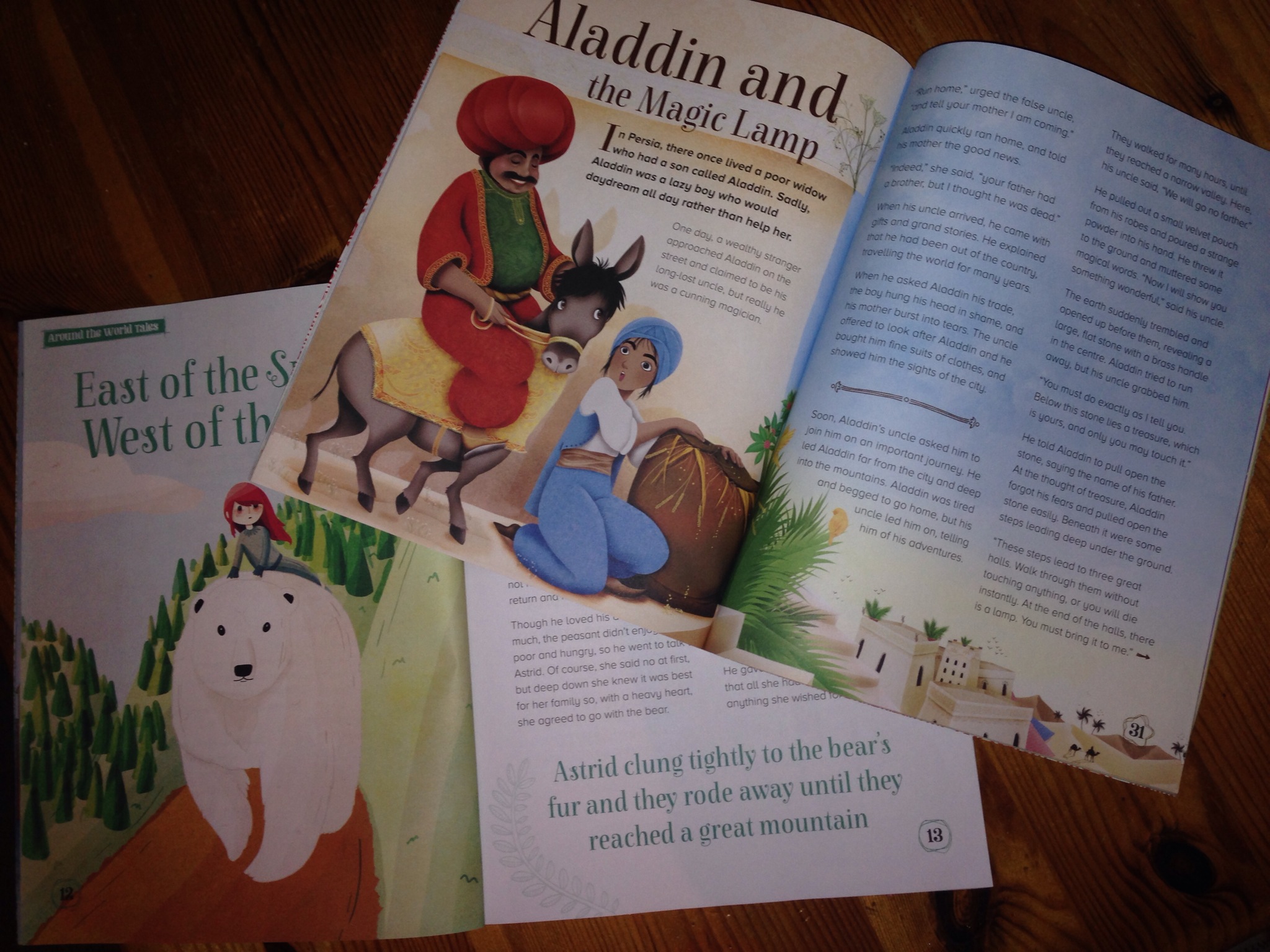 The first edition features the familiar tales of Goldilocks and the Three Bears, Aladdin and the Magic Lamp, and the Aesop’s fable the Hare and the Tortoise alongside the ancient Greek legend of Perseus and Medusa, the traditional Irish folk tale, The Fairy Bride, a beautifully illustrated version of Edward Lear’s classic poem, The Owl and the Pussy Cat and an extract from Alice’s Adventures in Wonderland.

Little E, my almost-five-year-old daughter and Little O, my just-turned-three-year-old son were a bit scared of Medusa and her head of snakes to start with, but they were fascinated by this tale as it was so unlike anything they had ever read before. They were full of questions about what they had just heard, and wanted to know more about Greek mythology. They loved the Owl and the Pussycat and although they are already familiar with The Hare and the Tortoise, they enjoyed hearing another version of it.

The second edition features extracts from The Wonderful Wizard of Oz by L Frank Baum, The Lucky Pedlar, a traditional English folk tale, an amusing poem of Old Mother Hubbard, The Gingerbread Man, the fable of The Lion and the Mouse, and the Augustus Gloop rhyme from Roald Dahl’s Charlie and the Chocolate Factory among others.

We’ve recently started reading some of Dahl’s shorter books, so this went down particularly well and they are keen to read the whole book. We also enjoyed the story of St George and the Dragon, although it was a bit too frightening in parts for Little E and is perhaps better suited to readers who are slightly older (and less sensitive!) than her. The Gingerbread Man (again, already familiar to them) and the fable The Lion and the Mouse have been read several times already, and they enjoyed the games in the back of the magazine.

My only real criticism is that it would be nice to see some new and exclusive stories in future issues. Although both editions contain a real mixture of fairy tales, folk tales, classic fiction and rhymes and poems, something completely new commissioned especially for the magazine would fit in well.

However, this is a wonderful treasury for young readers, introducing them to many different kinds of stories from different countries and different eras. These are magazines that will stand the test of time and be read again and again over the years. Little E has already asked if we can buy the next edition – she didn’t need to ask me; in fact, we’re going to take out an annual subscription.

Disclaimer: I have not been paid in any way to write this review and Storytime did not know I would be writing about them,. I bought these copies of Storytime magazine myself and am writing about them because we genuinely think it is great and would like to share that with other parents

Thanks for reading! To hear more from Cardiff Mummy Says, come and join me on Facebook

Homepage » Uncategorized » Have you read Storytime magazine yet? Here’s our verdict

3 Comments to Have you read Storytime magazine yet? Here’s our verdict