I haven’t written a children’s books round-up for ages so I thought the start of the new year was a good chance to resurrect this old series and offer out a few recommendations of books we’ve been enjoying recently.

In this series we share the books we have loved reading each month. You’ll find all sorts here from new releases to old favourites, a mixture of fiction and factual as well as picture books and chapter books. Some we own ourselves; others are borrowed from our local library. 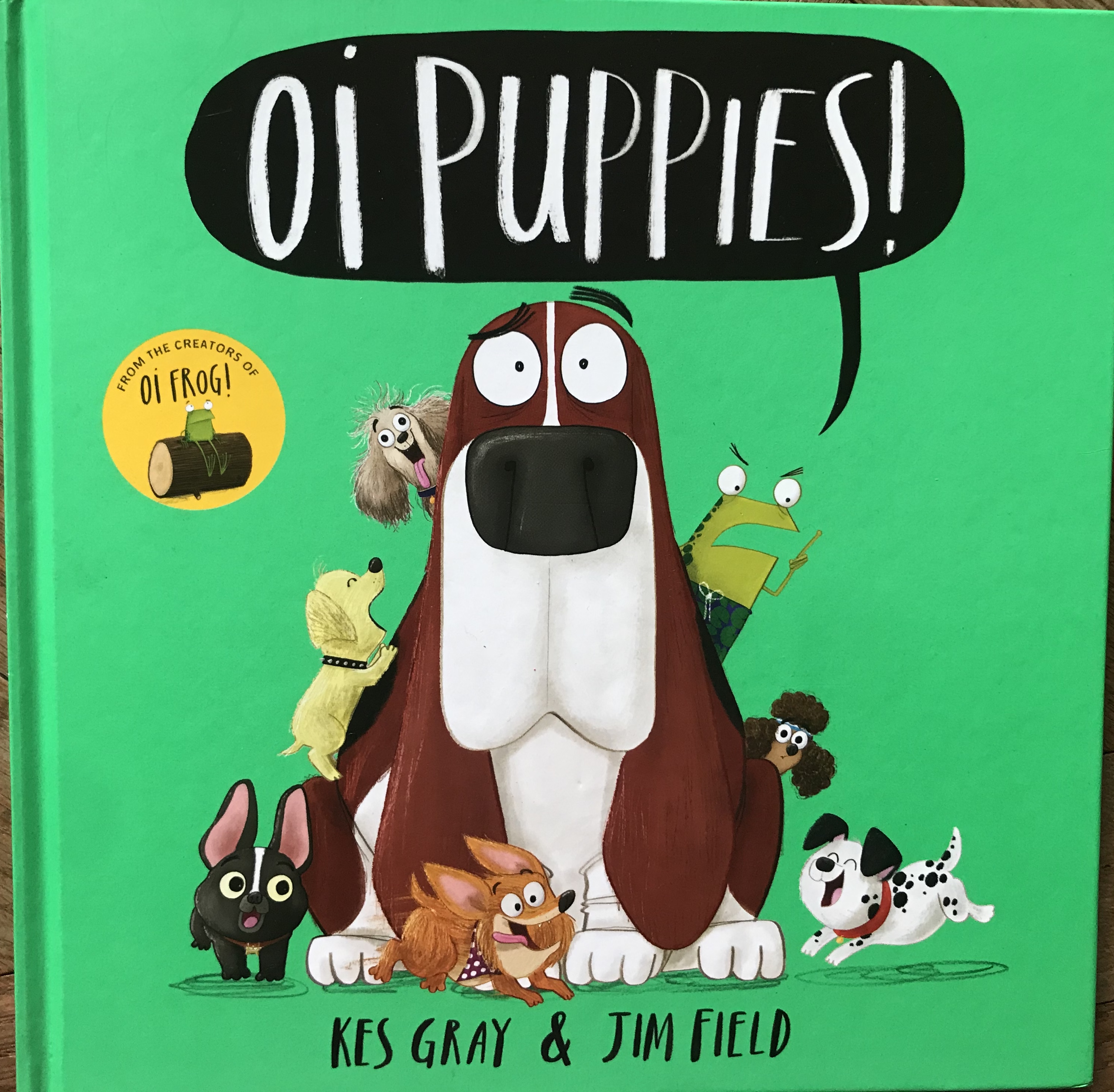 This is the fifth book in the Oi! series, and although it’s a little formulaic my youngest son absolutely loves it. I think it’s all the rhyming and the sheer amount of puppies that he enjoys, as well as being so familiar with the other books in the series (he also has Oi Frog, Oi Dog, Oi Cat and Oi Duck-Billed Platypus on his bookshelf) where animals must always sit on something they rhyme with, with a few humorous twists as the book develops. In this picture book, Dog is looking after some puppies… lots of puppies. Being puppies, they are too busy to sit and too badly trained to sit on the guppies they should be sitting on (it makes sense if you’ve read the other books!). That is, until Frog calls in the Oi Animal Seating Supply Co, and order is restored with some lovely rhyming and a quirky little ending. 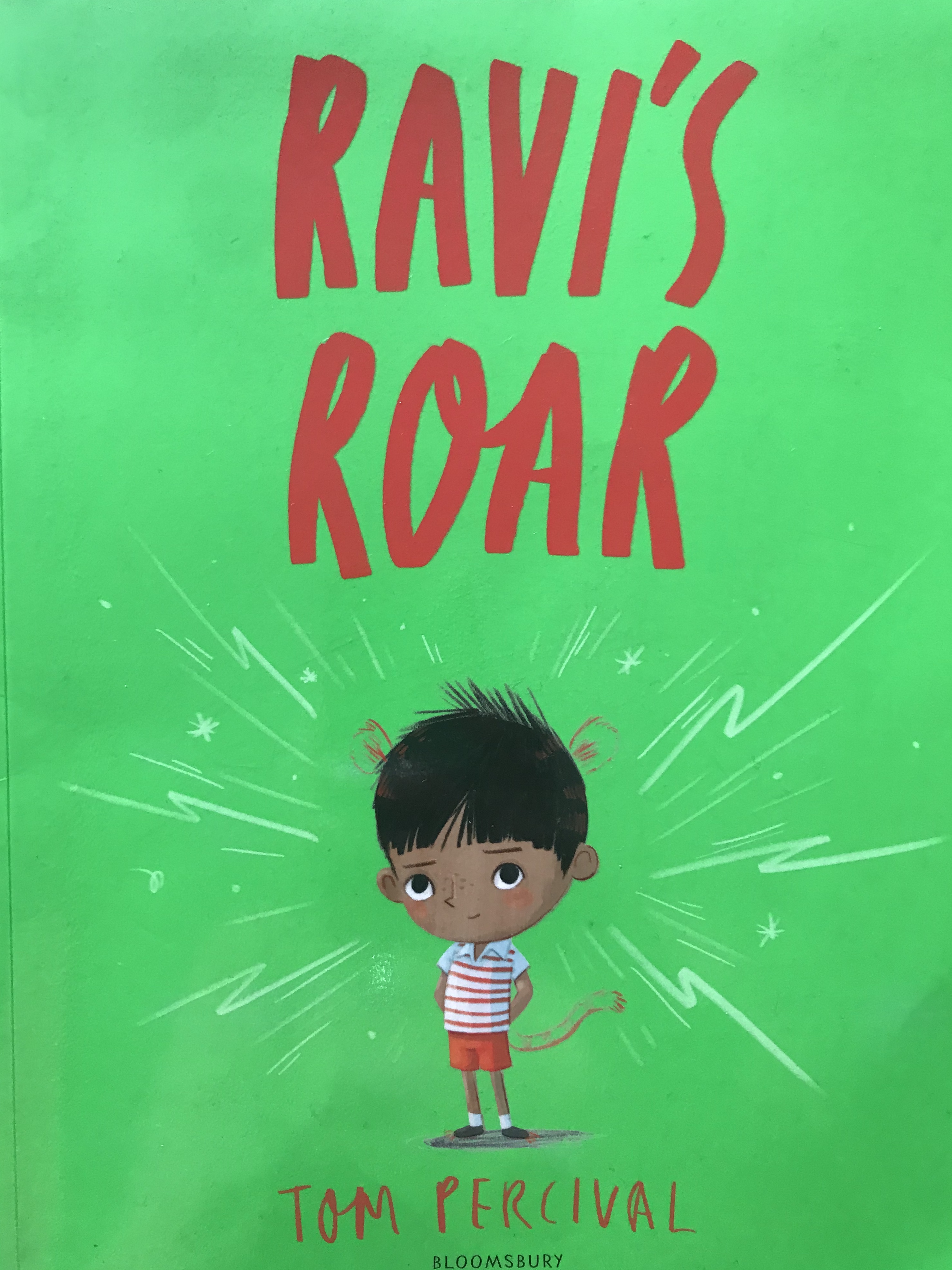 We first came across Tom Percival at Cardiff Children’s Literature Festival where he was reading from his book Perfectly Norman. Like that book, Ravi’s Roar (which we borrowed from the library) is a great starting point for helping children understand their feelings and how to process difficult emotions. Ravi is fed up of being the smallest in his family and of being too little to do all the fun things. And so one day, in a fit of rage, he lets out an almighty roar and turns into a tiger. At first being a tiger is fun because people do what he wants when he roars at them because they are scared. However Ravi soon realises that being a tiger that everyone is scared of is no fun and he has an important realisation about making amends. The simple and non-judgemental text is accompanied by beautiful illustrations that capture the emotions perfectly.

Other books in the Big Bright Feelings series, alongside Ravi’s Roar and Perfectly Norman, are Ruby’s Worry and Meesha Makes Friends 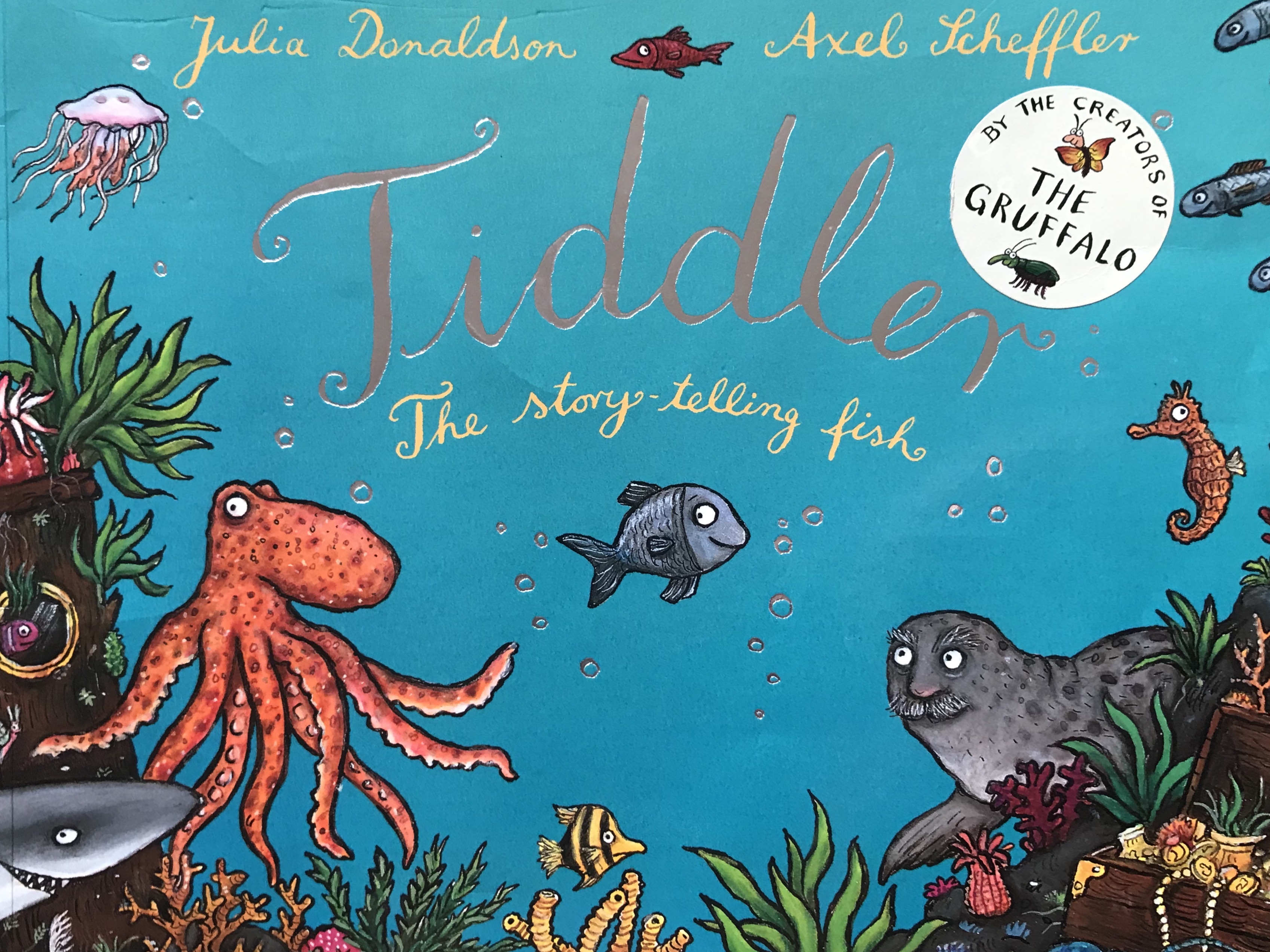 I’m sure we’re not the only family to have multiple Julia Donaldson books on their shelves. We love them all, but recently Tiddler has returned to our bedtime reading. It’s the tale of mischievous little fish Tiddler, who makes up more and more elaborate excuses as to why he’s late for school every day. But then one day, he accidentally gets caught up in an adventure that would rival any of his stories. The punchy rhyming style makes Tiddler a lively and fast-paced read, while younger children will love joining in with the “Tiddler, Tiddler, Tiddler’s late” and other refrains repeated throughout. Axel Scheffler’s illustrations, as always, are wonderfully detailed, with so much to spot on each page. 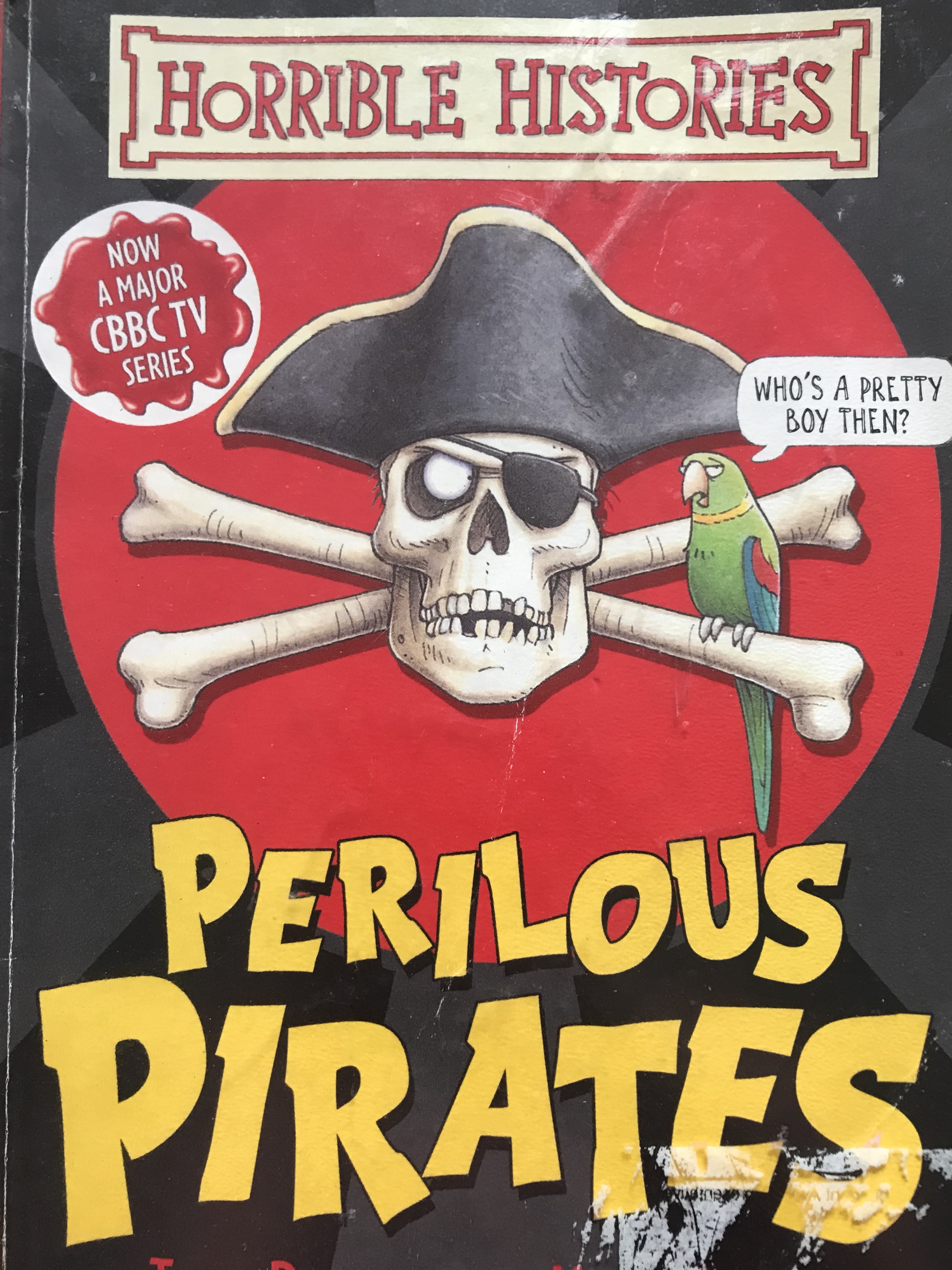 All three of my children love the Horrible Histories books and the TV series, so when we saw a book that we hadn’t read before at the library we were keen to borrow it. Perilous Pirates is such a fun and informative book with bright and colourful illustrations and enticing page designs that draw you in – although in true Horrible Histories style it’s full of gruesome facts and stories that will make you wince too. There’s a top 10 of putrid pirates, including Wales’s very own Sir Henry Morgan, explanations of what famous pirate catchphrases mean, pirates who met miserable ends, fact or fiction quizzes, foul facts about life at sea, plus plenty more. It’s one of those books you don’t have to read in a linear fashion and can dip in and out of, and you’ll learn as much as your children.

The Brilliant World of Tom Gates by Liz Pichon (Scholastic) 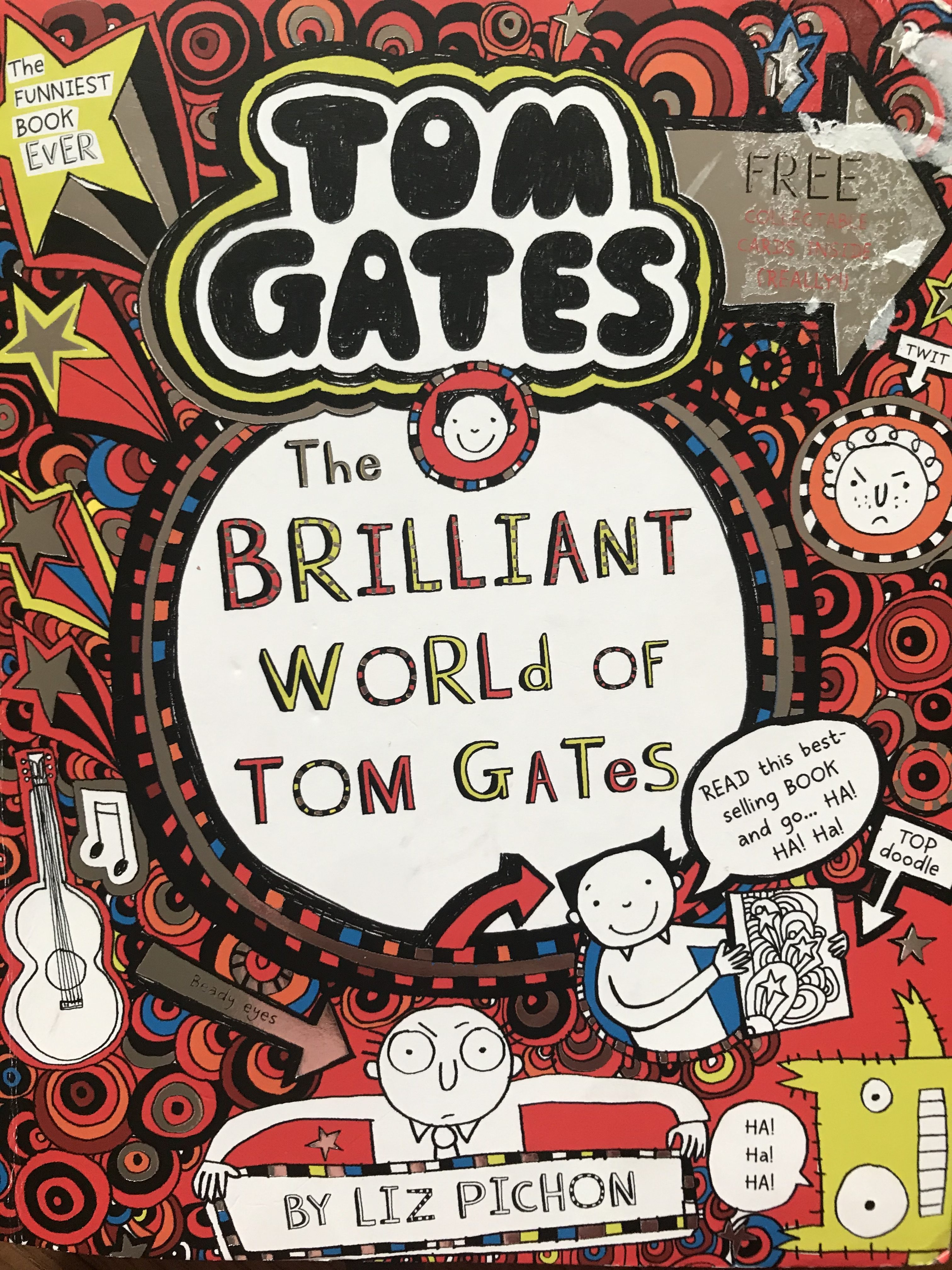 My two eldest children are huge fans of Liz Pichon’s Tom Gates books, and this is the first of many books in the series, which have been translated into 43 languages, and sold more than eight million copies worldwide. First published in 2011, The Brilliant World of Tom Gates is perfect for reluctant readers (not to mention more confident readers too) due to its accessible diary-style format, which is full of doodles, bubble writing, and various words written in different fonts as if Tom himself has taken pen to paper. Its plotlines are simple and easily relatable, such as family holidays mishaps, Tom winding up his big sister Delia, and trying to get himself noticed by Amy, the girl he fancies. It’s brilliantly funny. We have several books in this series, and are looking forward to reading the rest too. 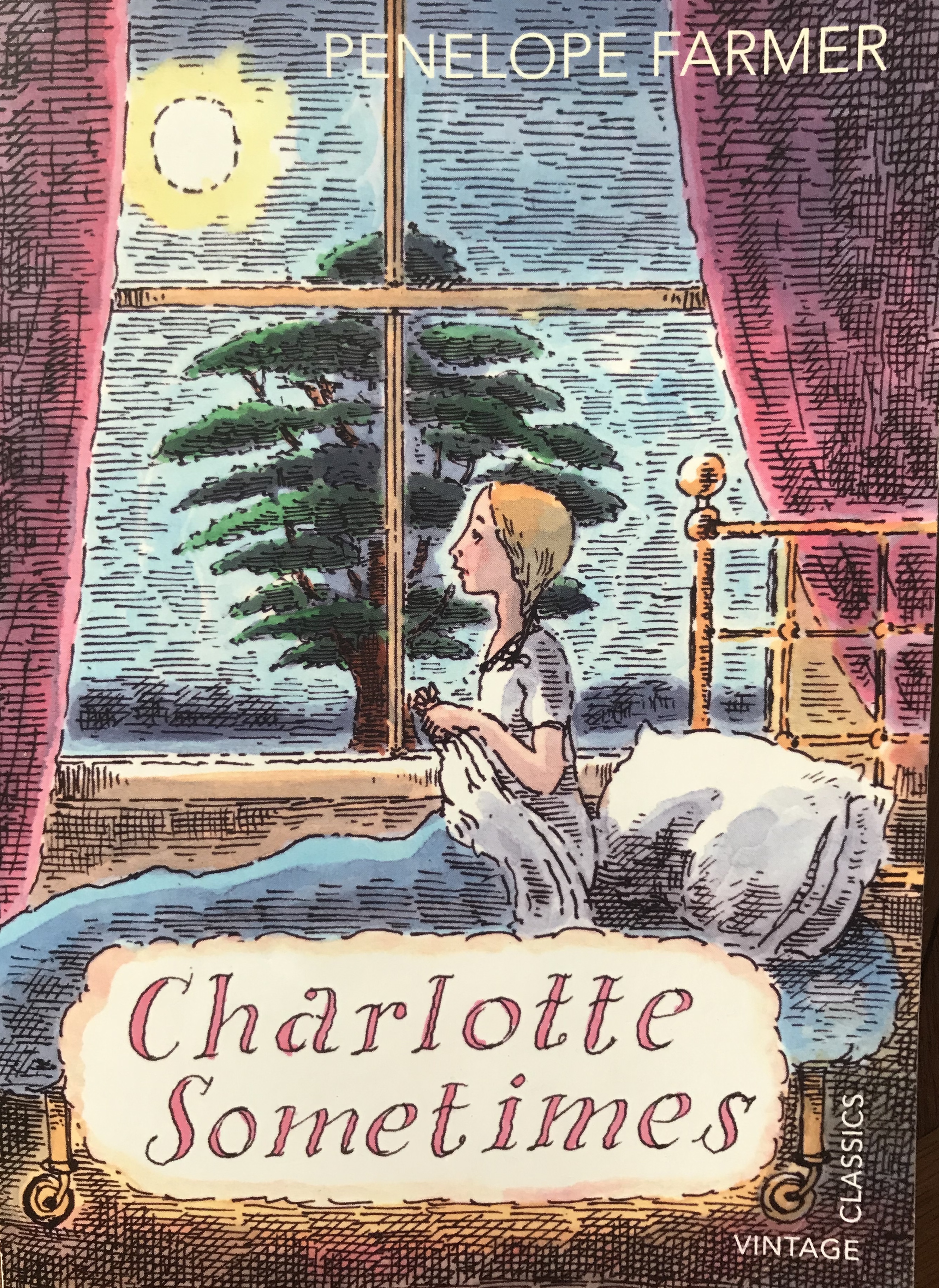 This was one of my favourite books as a child – I borrowed it repeatedly from Barry Library when I was younger and can still remember the yellow hard back cover and picture on the front. Although I have often thought about this book over the years, I had never been able to remember the name and no one ever knew what I was talking about. Until, that is, my husband by chance read something out loud to me from Spotify about The Cure song, Charlotte Sometimes and told me it was inspired by a book. Of course I had to order it immediately, and gave it to my 10 year old daughter in the hope she would love it as much as I had. First published in 1969, Charlotte Sometimes is about a girl called Charlotte who attends a boarding school – but wakes one morning in the same bed, in the same room, having travelled back in time 40 years earlier to 1918 in the midst of the war. Everyone calls her Clare and she tries to navigate 1918 without anyone noticing who she really is. Every day, she swaps between her present day and Clare’s past, and begins to communicate with Clare via Clare’s diary. But then Charlotte gets stuck in the past… As well as being a magical adventure for older children, Charlotte Sometimes also gives a great insight into what life was like during the first world war. Thankfully my daughter loved this book too and now that she’s finished reading it, I’m looking forward to returning to it more than 30 years later. 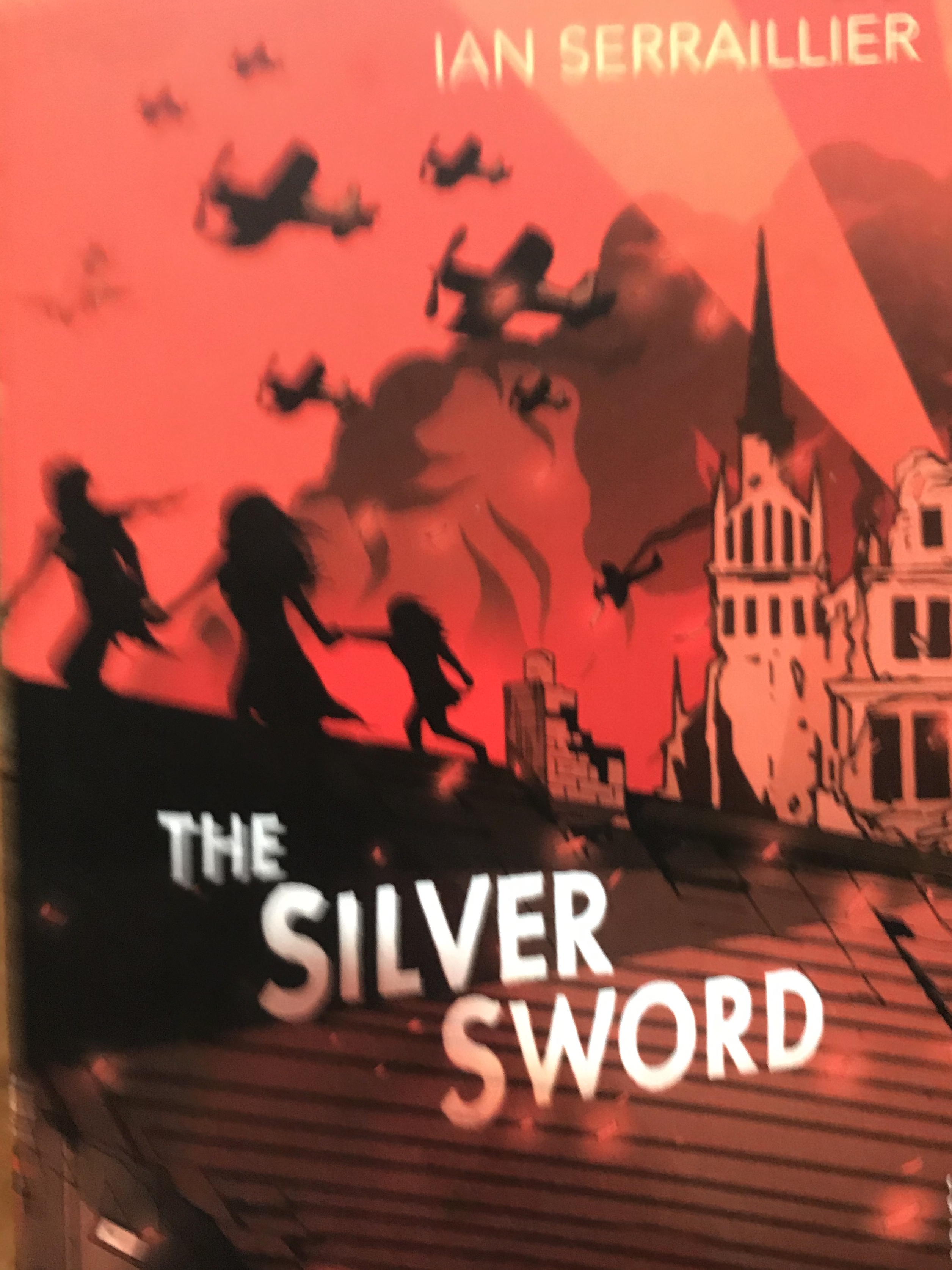 On the subject of childhood favourites, my daughter has also just read The Silver Sword by Ian Serraillier, a book my husband loved as a child. Set in Poland during World War Two, The Silver Sword is about three children, Ruth, Edek and Bronia, who are helped by Jan, a young orphan, to escape from the horrors of Warsaw after the arrest of their parents. The children face every kind of danger as they journey across war-torn Europe to find their parents, in a novel that is deeply moving as well as thrilling.

The Train To Impossible Places by PG Bell (Usborne) 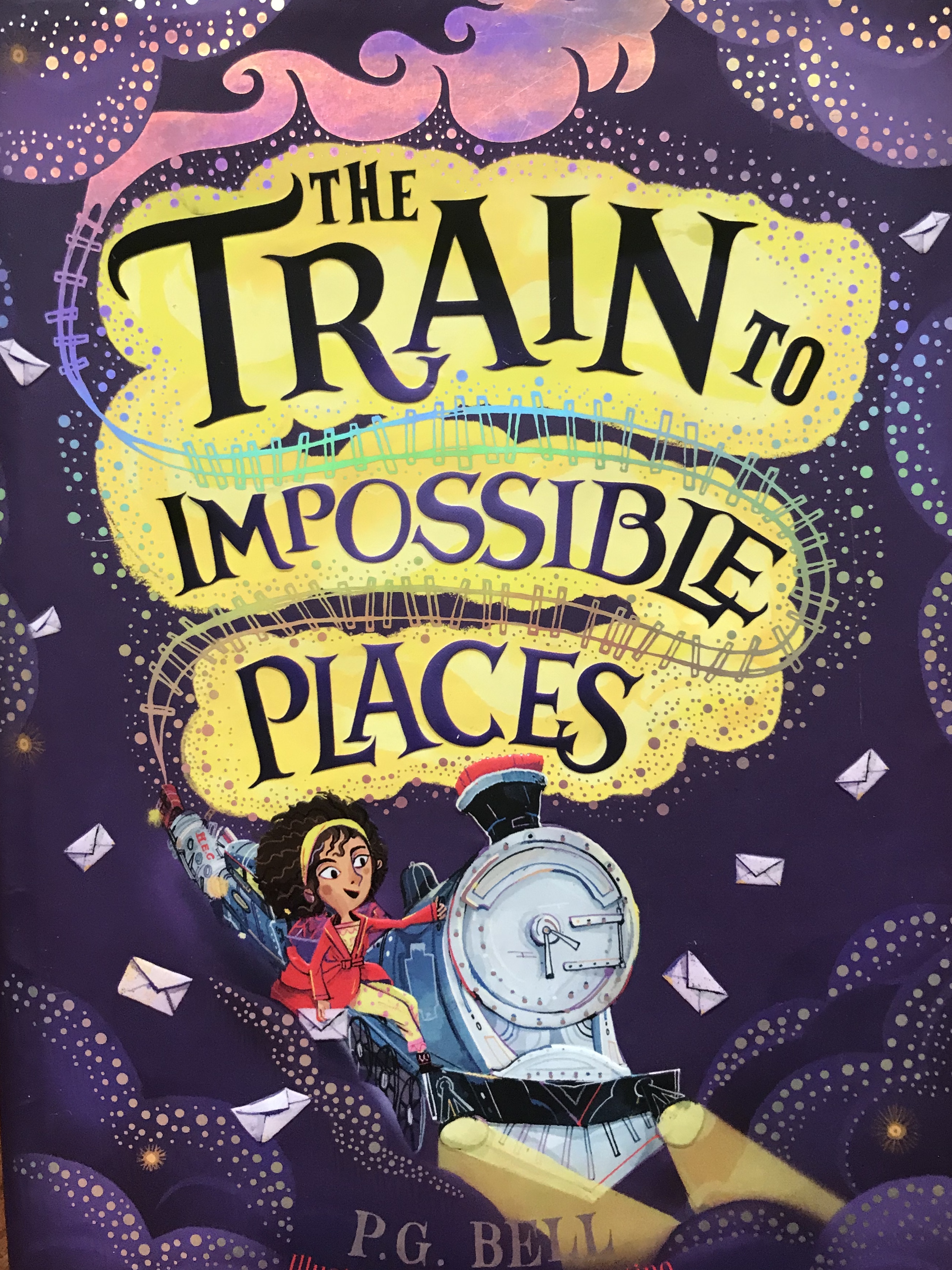 When my 10-year-old daughter saw I was doing a round-up of children’s books, she said I needed to include The Train To Impossible Places by Cardiff dad of two, PG Bell, and wanted to write a review herself. She’s read it a couple of times since it was first published and really wanted to recommend it to you all… So over to her!

“This imaginative book follows the adventures of Suzy and Wilmot, a troll who delivers post onboard the Impossible Postal Express. When Suzy is whisked on to the Impossible Postal Express in the middle of the night, she gets her first job, delivering a parcel to the evil sorceress Lady Crepuscula. Before she knows it, Suzy finds herself woven into an adventure with the fate of Trollville and the Impossible Places depending on her. A boy inside a snow globe. A train that travels to impossible places. What more do you want? This is a magical adventure that’s emotional in parts but not overly scary. Perfect for fans of Harry Potter and The Clockwork Crow. And even better! It’s written by a Cardiff dad!”

She’s now looking forward to reading the follow-up, The Great Brain Robbery, which sees Suzy boarding the train again, and the inhabitants of Trollville endangered when a tremor hits the city. 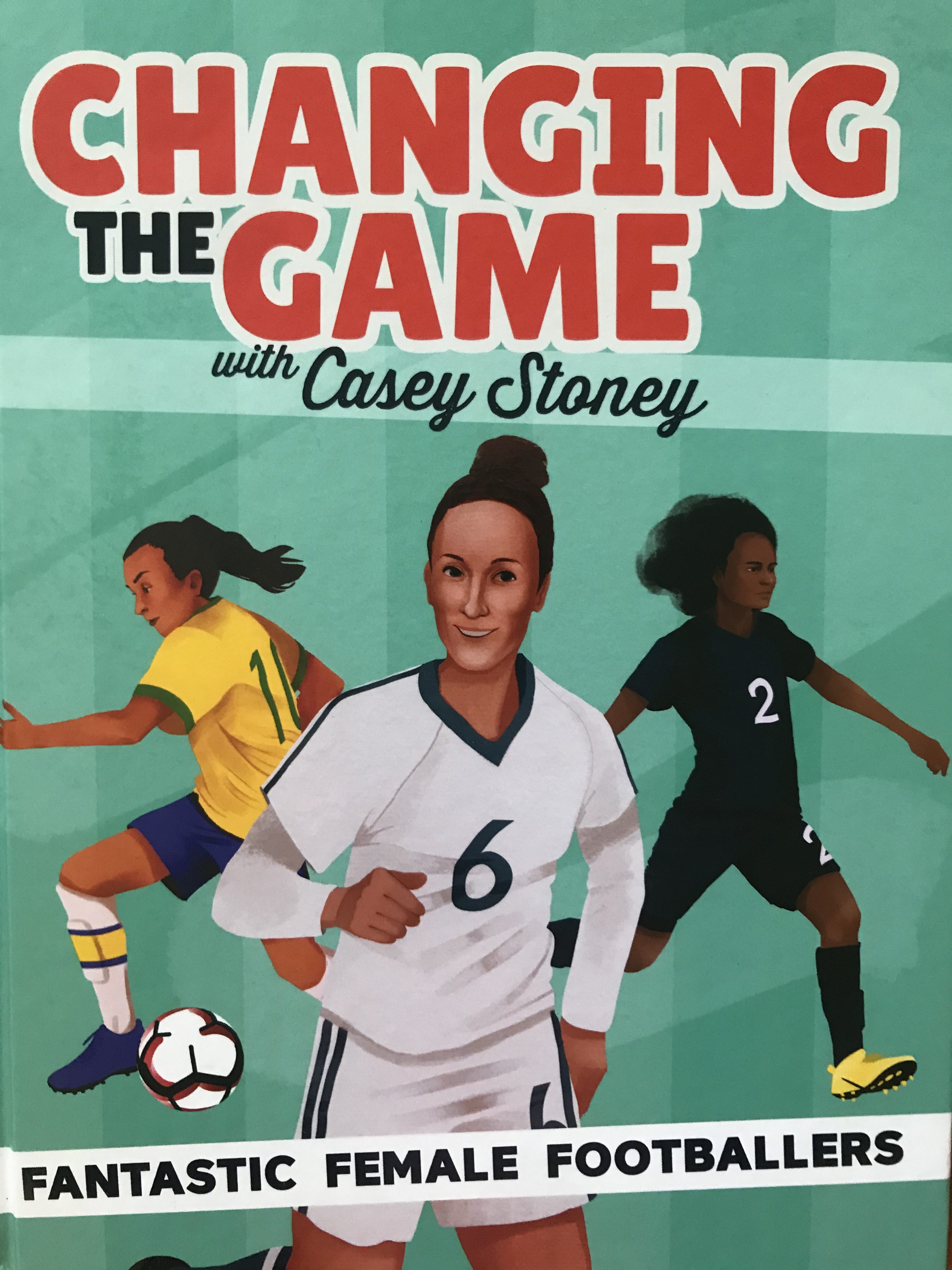 My 10 year old daughter loves football. She has an encyclopaedic knowledge of the Premiere League and loves supporting Liverpool (thanks to her dad), Wales (thanks to me) and England (again thanks to her dad). However it’s been important to us as parents to ensure she and her brothers are not just exposed to the male game. All three of our children were hooked on the 2019 Women’s World Cup and in November we all went to see England’s Lionesses play Germany at a packed-out Wembley Stadium. This beautiful hard-backed book is the perfect introduction to some of the world’s most significant female players. Packed full of lovely illustrations of the women, and with inspiring quotes from many of them, there’s a timeline of the history of the women’s game, sections on legends and some of the world’s greatest, with each woman having around four pages devoted to her. There’s a section on current top players, as well as rising stars of the future. The book is full of facts and figures, but most of all it’s full of inspiring stories of women who have achieved against the odds. Many of them come from deprived backgrounds, others found themselves playing on all-boy teams, outshining all the boys with their talent, but often not being accepted by their teams. Several of these women helped to change the rules, including my daughter’s favourite player Lucy Bronze, who with the help of her family, campaigned successfully for the age limit for mixed teams to be raised. The book shows just how much has changed over the decades for women’s football… but it doesn’t shy away from just how much further there is to go for it to be anywhere near the men’s game. My daughter doesn’t currently want to play football herself, but I’m sure she’ll take plenty of inspiration from this book about achieving goals, challenging the norm, equality, and just how much one person can achieve. An inspiring and informative read.