Beyond the kids Theatre reviewsOctober 30, 2019

9 to 5 – the film which starred Dolly Parton, Lily Tomlin, and Jane Fonda as office workers seeking revenge on their sexist boss – might be nearly 40 years old, but sadly the sexual harassment, gender pay gap, a lack of flexible working, and men being promoted over women that featured in the film aren’t quite yet things of the past. It might not (always) be as overt as back in the 1980s but we are living in the #metoo age where women are speaking out more than ever before about sexual and workplace discrimination and it feels like the men of the world are starting to listen. This current relevance could well be one of the reasons why this revival of 9 to 5 The Musical is such a success, compared to its short-lived stints in the US and UK at the turn of this decade.

Like the film, 9 to 5 The Musical follows three office secretaries as they get even with their sexist, lying, egotistical boss. 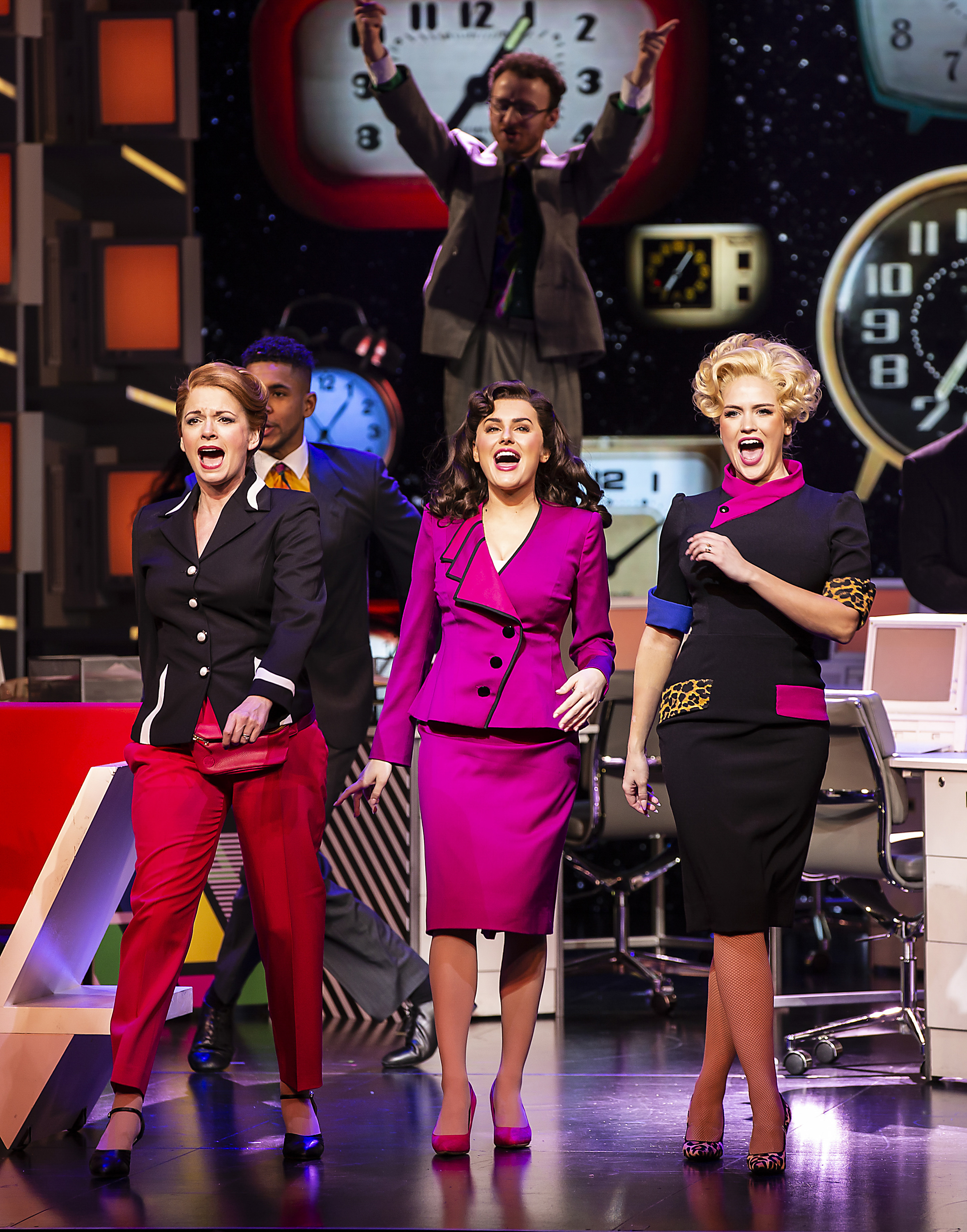 There’s Violet Newstead – played by Caroline Sheen from Caerleon, here in South Wales, and cousin to Michael – overlooked for promotion in favour of a way-less experienced man she trained. The timid Judy Bernly – played by North Wales’s Amber Davies, the former Love Island winner who turned down a role in the West End production of Hairspray to appear on the reality TV show – arriving for her very first day of work, pining for her husband who left her for his secretary. And Doralee Rhodes – played by Georgina Castle, daughter of former UK tennis pro Andrew – judged by the whole office for her big blonde hair and busty looks.

All three have been wronged by their boss, Franklin Hart Jnr and seek revenge whilst simultaneously revolutionising the working culture in their office. Sean Needham is great as the misogynistic boss, getting that arrogant charisma spot on. There are several moments where we find ourselves laughing at his leering and casual sexism – and immediately questioning whether we should be laughing at all given such wrong behaviour still exists today.

The musical is written by Dolly Parton, and it is to the audience’s delight that she appears on stage in pre-recorded video segments, narrating elements of the story and leading the show’s most famous musical number, the titular 9 to 5. 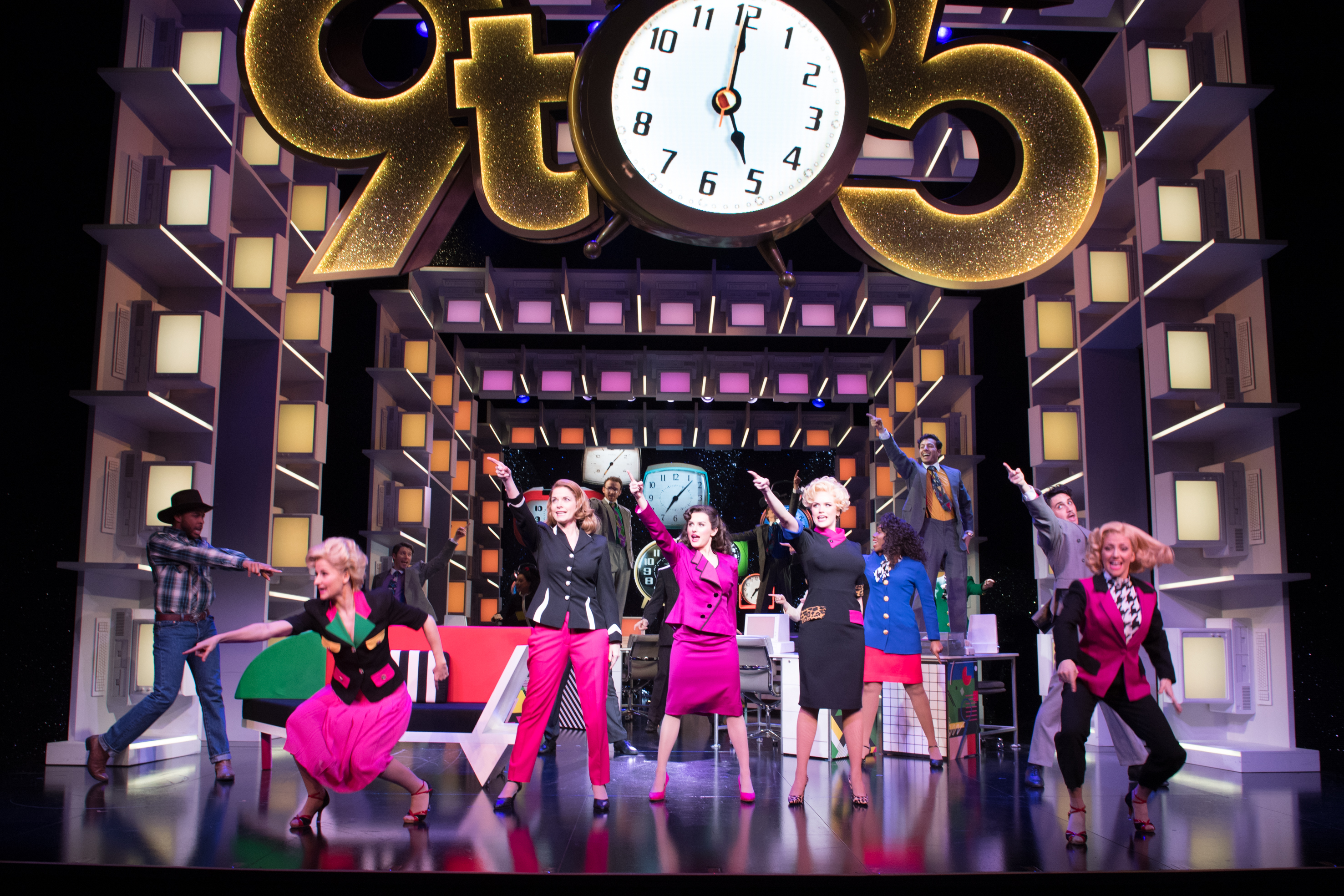 That’s definitely the strongest musical number, but other highlights include Backwoods Barbie in which Doralee laments a lifetime of being misunderstood because of the way she looks; Get Out And Stay Out, where Judy has grown in confidence so much she finally tells her ex-husband where to go, performed with some incredible powerhouse vocals from Davies; and Heart to Hart, where we discover a new side to straight-laced office snitch Roz (Lucinda Lawrence), the only woman in the company who likes the boss, as she imagines her destiny with Mr Hart as her red-hot lover. Her splits are particularly impressive!

The age guidance for the show is 12 – I had wondered whether I could get away with taking my nearly 10-year-old but am very glad I didn’t as there are rather a lot of references to sex, drugs and more that I wouldn’t have been comfortable with her watching. Instead, I took my husband as we had a rare child-free night. I’d wondered if the mostly female audience and chick-flick vibe might put him off, but he loved it just as much as I did.

There’s nothing I would really criticise about this show. It’s good fun, entertaining, with strong performances all round, plenty of fantastic one-liners, and a feel-good ending that had the audience dancing in their seats and giving a standing ovation. A brilliant night out.

9 to 5 The Musical is at Wales Millennium Centre, Cardiff Bay until Saturday 2 November. Visit the website for details.

Homepage » Beyond the kids » A review of 9 to 5 The Musical at Wales Millennium Centre, Cardiff