I don’t think I have ever heard my children laugh so much at a book, ever. The first time I read The Book With No Pictures to them, they were pretty much crying with laughter. We had to read it three times in a row. We could have read it at least another three times if it wasn’t already past their bedtime.

“This is the funniest book in the whole world,” said Little Miss E, my six-year-old daughter.

Even their younger brother, just-turned-two-year-old Toddler Boy I was laughing along… although possibly at us, rather than the book itself.

Miss E and Little Man know I review children’s books on Cardiff Mummy Says. They made me promise I would write about this one because they think other children will enjoy it too.

“Make sure you tell them about Ba-DOOONGY FACE!!!!” said Little Man O, referring to one of their favourite words in the book. “And that the grown-ups have to read EVERYTHING.” 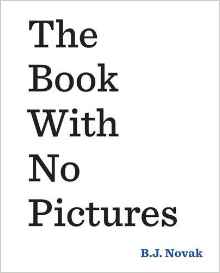 And that’s the premise of this book. As the cover says, there are no pictures. But there are words, lots of stupid words, in different font sizes and colours, and the rule of the book is that the person reading must say all of these words out loud. All of this is at the expense of the person reading the book, of course. My children think it’s hysterical listening to me calling myself a monkey and admitting that my head is made of blueberry pizza.

Alongside the stupid words are a kind of ‘aside’ commentary, voicing what the parent reading the book is probably thinking. This page, for example: 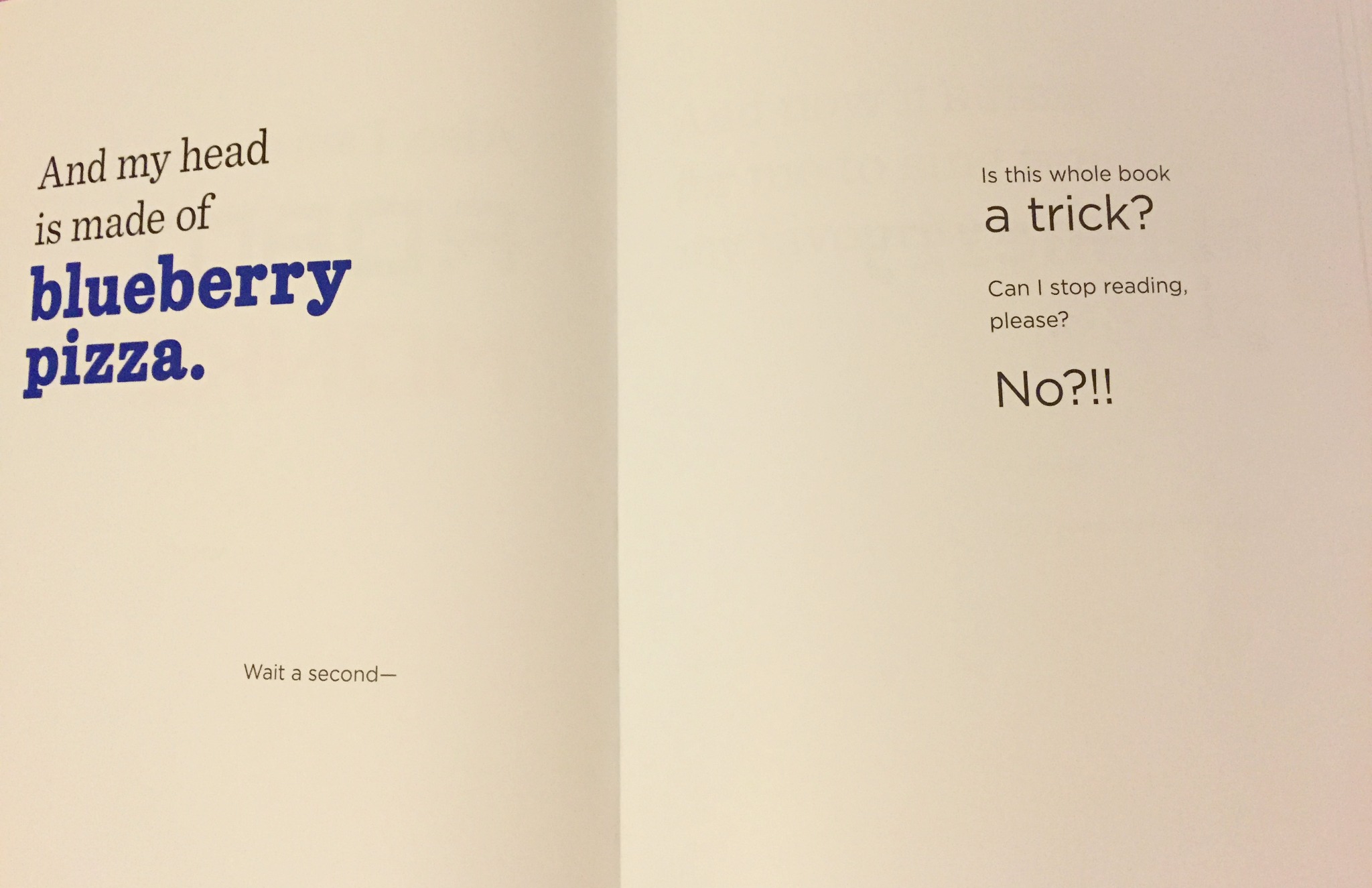 I appreciate the book – written by BJ Novak, who worked on the American version of The Office and who is known for his stand-up comedy – probably isn’t to everyone’s sense of humour.

In fact, if I’d read it on my own first, before reading it to my children, I probably would have put it straight back down because it’s not the kind of thing I usually laugh at. But it’s been a best-seller on both sides of the Atlantic, I’ve heard other parents say their children love it, and so when I saw it was newly published in paperback here in the UK, I picked it up and bought it without even looking inside.

Like I said, if I had, I probably would have put it back down. But the first time I read it was out loud to my children – who were laughing hysterically within the first few pages. Their reaction surprised me, especially Little Miss E, who is a very competent reader now leaving picture books behind in favour of chapter books. And the more they laughed, the more I played on the silliness within the book, which made them laugh all the more. 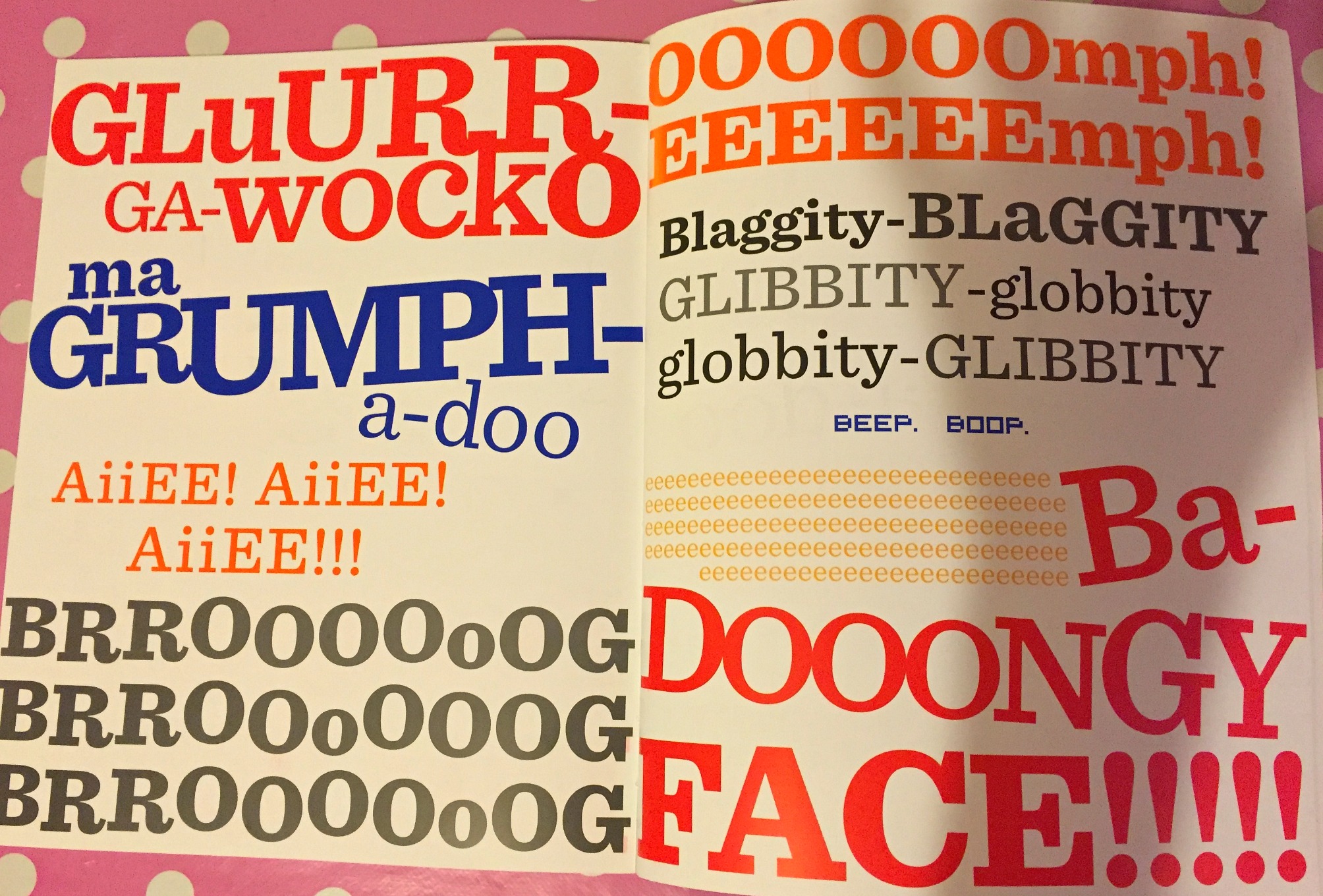 To get the most out of this book you have to not take yourself too seriously. There’s one double page which is full of random nonsense words. The more expressive I am when reading these words, the more my children laugh. As well as always having to read the book more than once every time we read it, they also want to read this particular page three or four times in a row. They never seem to get bored of this page, or indeed the book as a whole.

For children aged between about three and eight, we highly recommend it.

Have you read BJ Novak’s The Book With No Pictures? What did you and your children think of it? Do let me know on the Cardiff Mummy Says Facebook page, by tweeting me on @cardiffmummy or in the comments section below.

You can see all of my children’s book reviews in the Books section of Cardiff Mummy Says.

*I am a member of Amazon Associate’s affiliate scheme.