Beyond the kids Cardiff theatreNovember 30, 2018

Thanks to Wales Millennium Centre for providing complimentary tickets to see Saturday Night Fever in exchange for this review.

There can be few movie images as iconic as John Travolta in his white suit, arm raised and finger pointed as he struts across an illuminated dance floor in Saturday Night Fever. The film grossed more than $285m (£217.5) including $11m (£8.5m) in its first 11 days of release in 1977 and its original soundtrack by the Bee Gees was the best-selling movie soundtrack of all time until The Bodyguard came along in 1992. More than 40 years after the film’s release it’s still a firm favourite – as demonstrated by an almost sell-out run of Bill Kenwright’s new touring production of the disco-tastic musical at Cardiff’s Wales Millennium Centre this week.

Set in the real-life Brooklyn neighbourhood of Bay Ridge, Saturday Night Fever tells the story of 19-year-old Tony Manero, a good-looking Italian-American working in a hardware store by day but living for the nights when he can head to the 2001 Odyssey nightclub where he’s king of the dance floor. 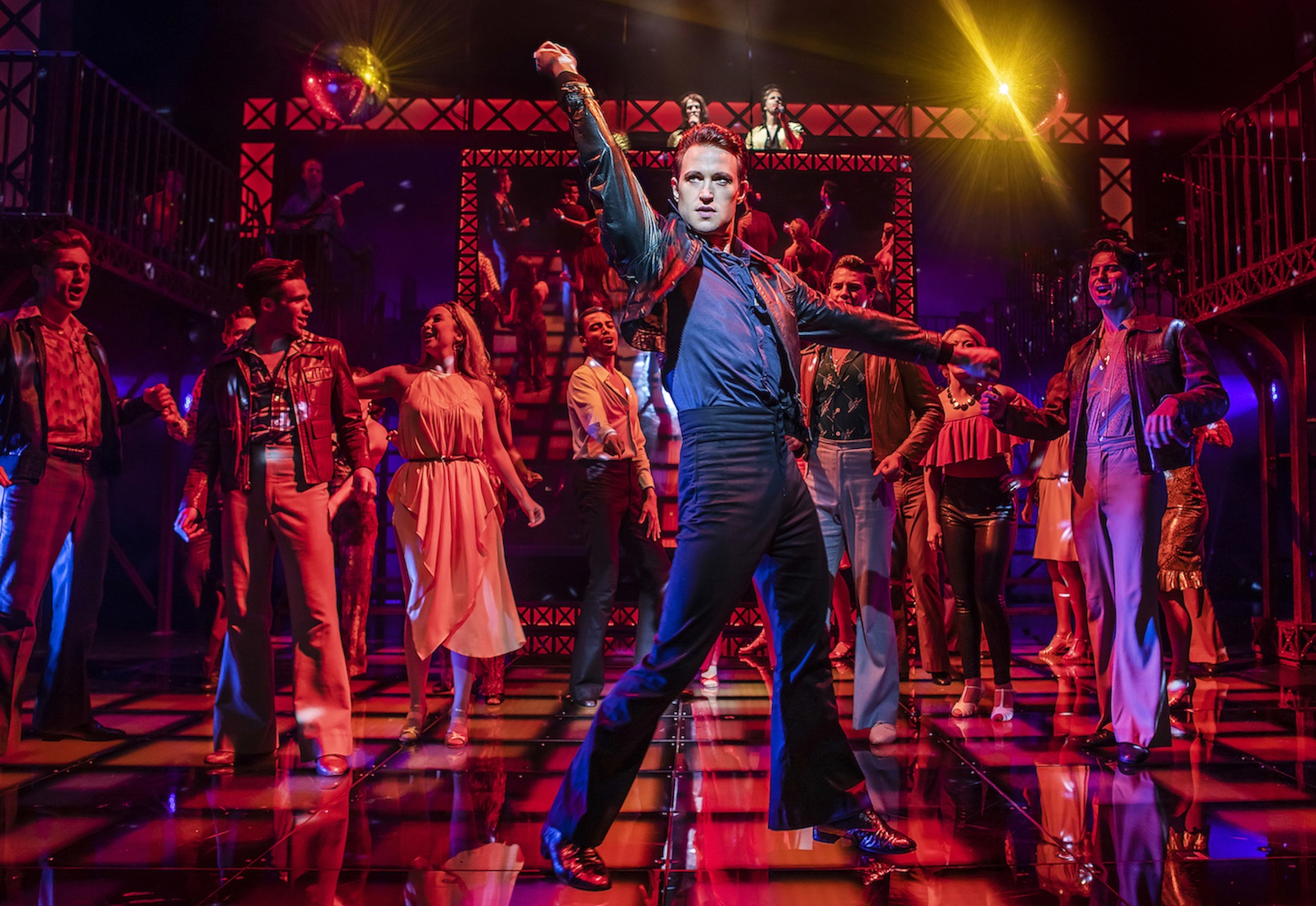 Choreographer Bill Deamer’s dance sequences to such classic songs as Stayin’ Alive, Disco Inferno, Night Fever, You Should Be Dancing and Jive Talkin’ fill the stage with colour and synchronised movement. All round me people are desperate to dance, boogieing away in their seats but it’s not until the finale megamix number when we’re all up on our feet, admittedly looking nothing like the professionals but having great fun regardless. 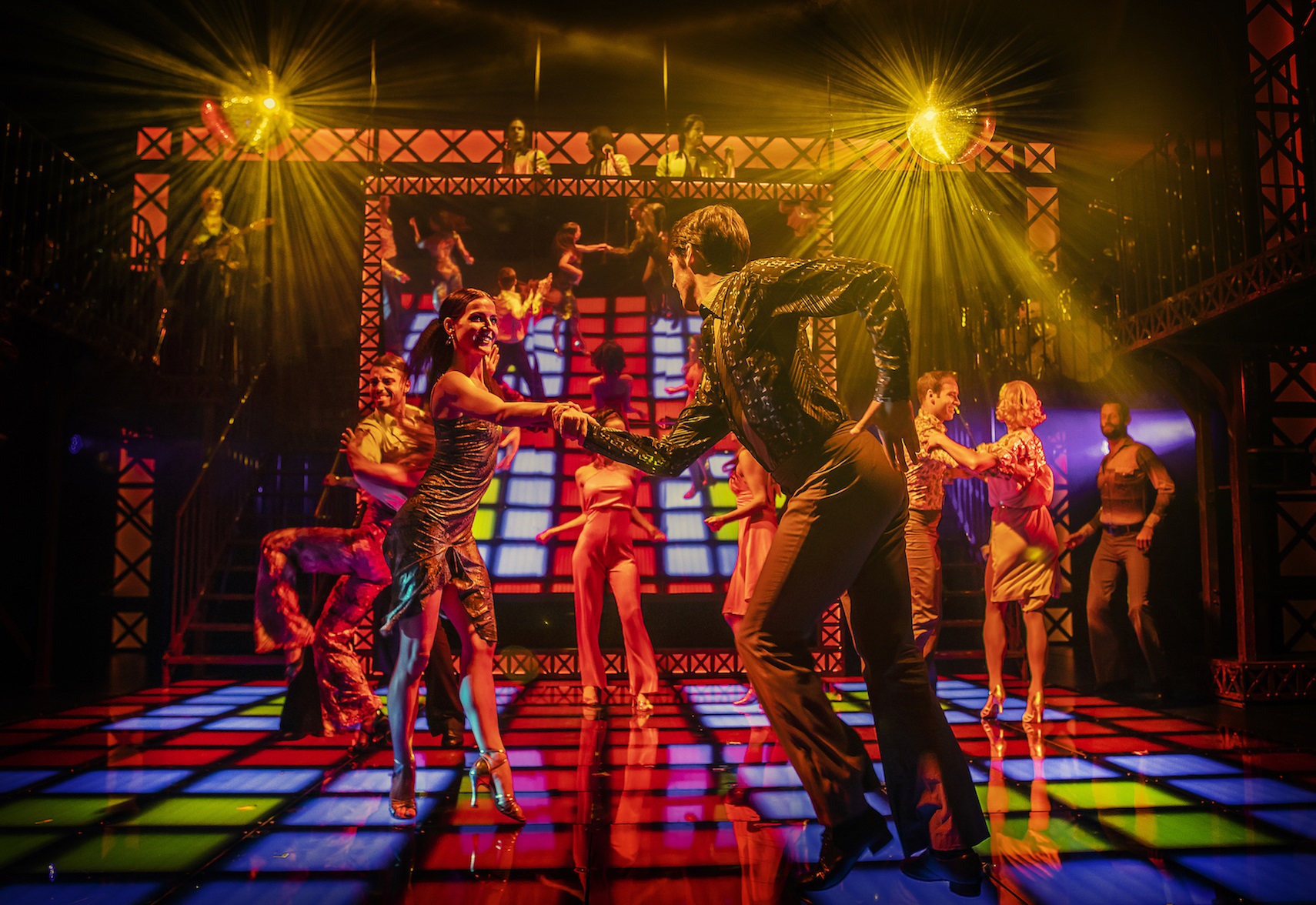 Away from the dancing, the show tackles a number of serious issues including domestic violence, sexual assault, abortion, drug abuse, suicide, racism and more. It’s a lot to cram into two hours but it’s great to see the show’s producers taking the grittier elements from the original film rather than presenting a more sanitised juke-box version of the show based solely around the music.

Edward Handoll, Alastair Hill and Matt Faull are Barry, Maurice and Robin Gibb – The Bee Gees – performing on a raised platform above the stage. They sound so like the real thing with those distinctive high pitched voices and harmonies. However there are occasions such as Annette (Anna Campkin)’s solo number If I Can’t Have You and Bobbie C (Raphael Pace)’s rendition of Tragedy where the harmonies from the band drown out the soloists a little too much. 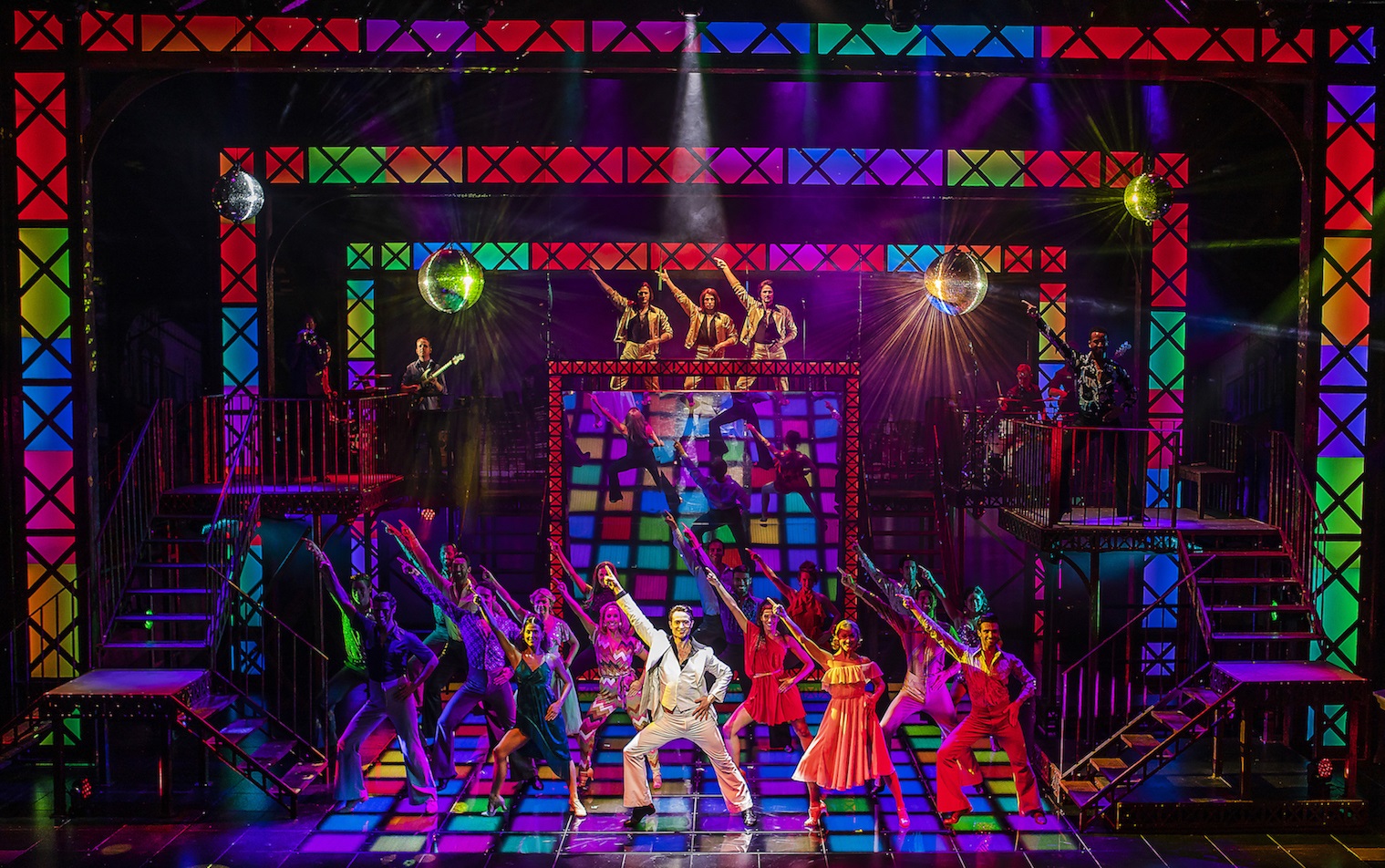 Richard Windsor plays Tony Manero. Best known as Casualty’s Caleb Knight he’s also a trained ballet dancer and has performed extensively with Matthew Bourne’s ground-breaking New Adventures dance troupe. He’s not quite as enigmatic as Travlota (a tough act to follow) but his ballet-led solo dance is particularly moving and a contrast to the mostly disco moves.

Saturday Night Fever is an energetic and vibrant show giving us plenty to think about between those disco moves. It’s definitely not suitable for children, with an age guidance of 12, but it’s a good night out for the grown ups.

Saturday Night Fever is at Wales Millennium Centre until Saturday 1 December with some tickets still available. See the website for booking details.