I find those couple of hours between school pick up and tea time can be hard work sometimes. My children are often tired and grumpy after school but paradoxically they still have bags of energy to expel. When the weather is good we often head straight to the park on the days they don’t have activities or clubs. But when it’s raining I find that they need focused activities to hold their attention so that they don’t end up taking their frustrations out on each other and fighting and arguing.

Often this will be colouring and drawing, building things with Lego, reading stories, or maybe playing a board game. We were thrilled to be sent a selection of goodies from John Adams perfect for this time of day when I’m looking for quiet toys that help my children unwind.

Here’s how we got on putting them to the test. 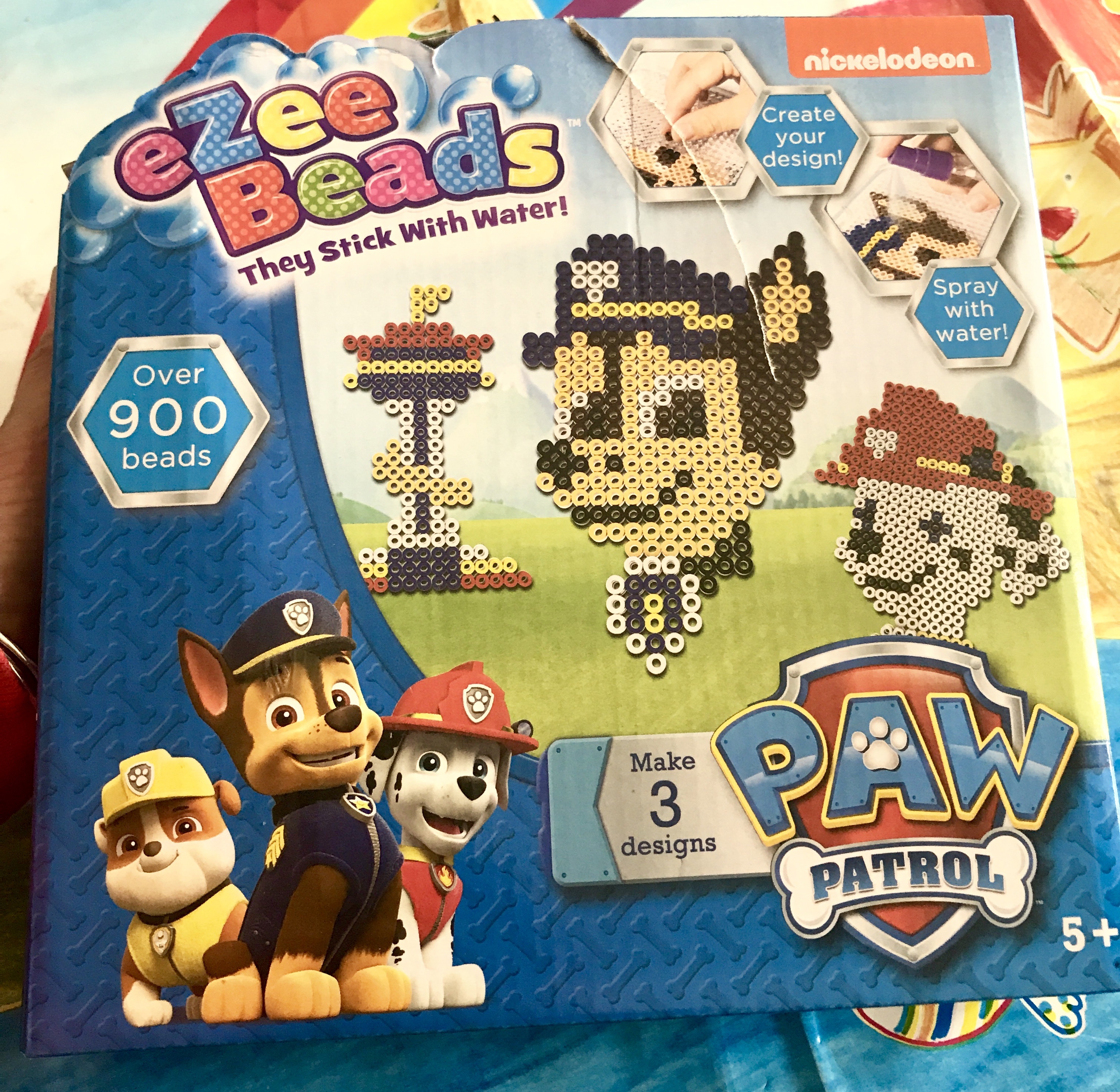 Littlest Boy I is now 3½ and absolutely loves Paw Patrol. In fact all three of my children do but whereas the eldest two are happy to just watch the show he loves all the merchandise and toys that go with it. He absolutely loved the John Adams/Nickelodeon Paw Patrol eZee Beads set. 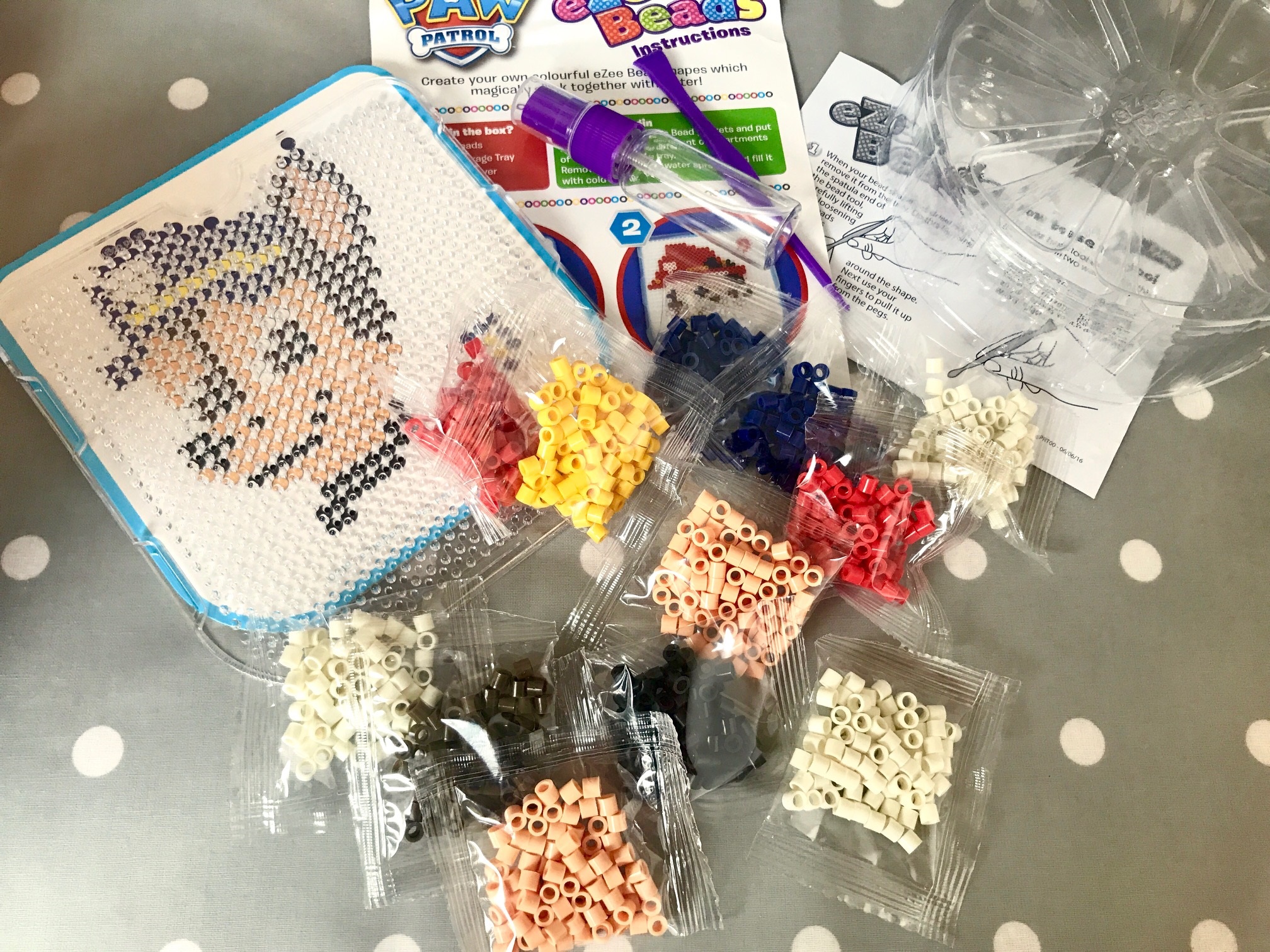 He’s seen Little Miss E, his 7¾-year-old big sister, playing with these kinds of beads before and although the age guidance is 5+ he was keen to give them a go (with close adult supervision obviously).

There are three designs in the set: Chase, Marshall and the look-out tower, plus over 900 coloured rubbery beads with which to make them. There’s a plastic tray with sections for each colour of bead so his big brother and sister helped him separate them. The cardboard designs slide into the plastic base and children can then use the plastic tool to pick the rubber beads out of the tray and put them onto the base. 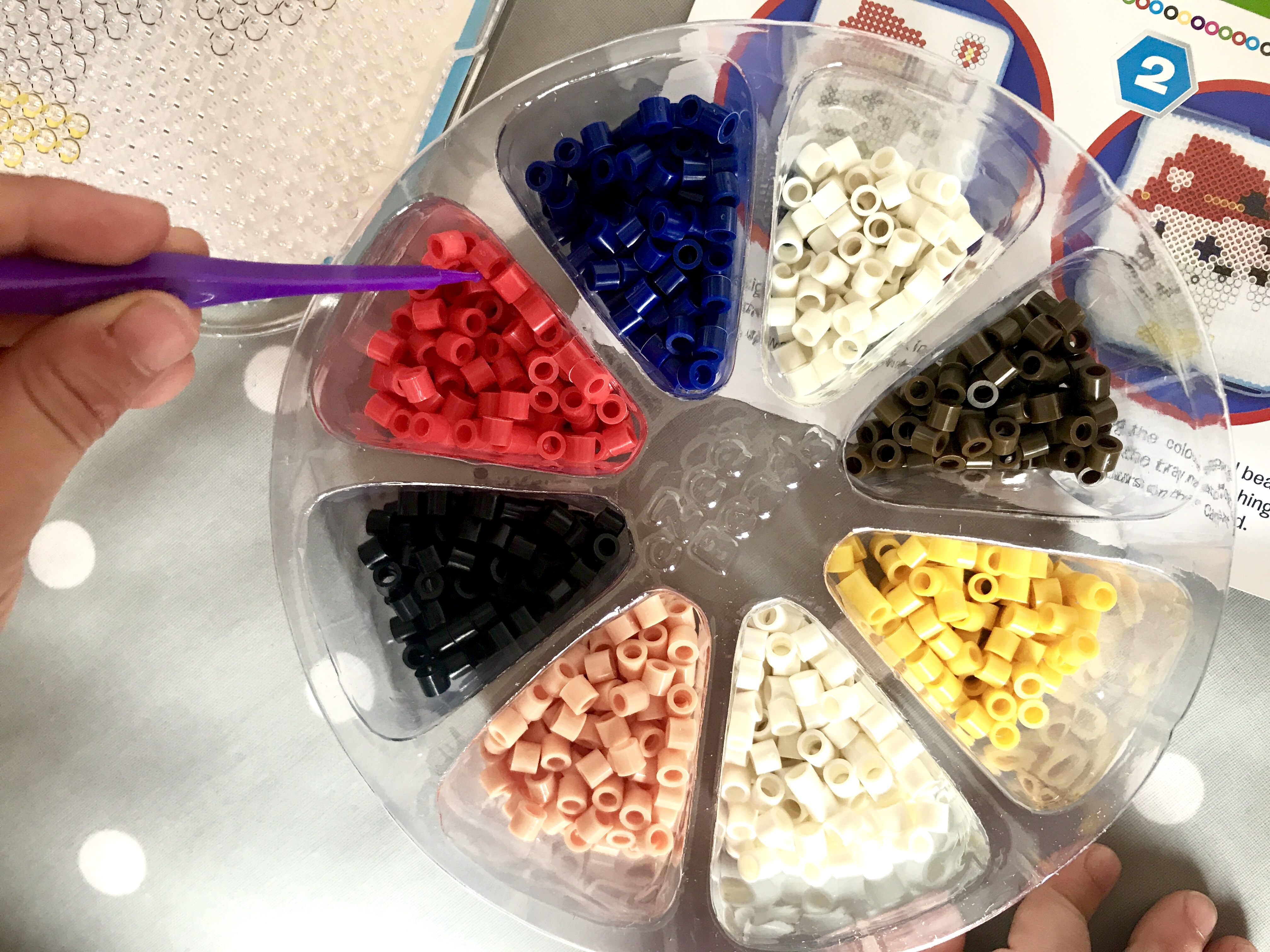 I was impressed with just how well Littlest concentrated on doing this. He’s such an active child who doesn’t often stay still but he loved this. He needed some help but nothing his big brother Little Man O, who has just turned six, couldn’t help with. 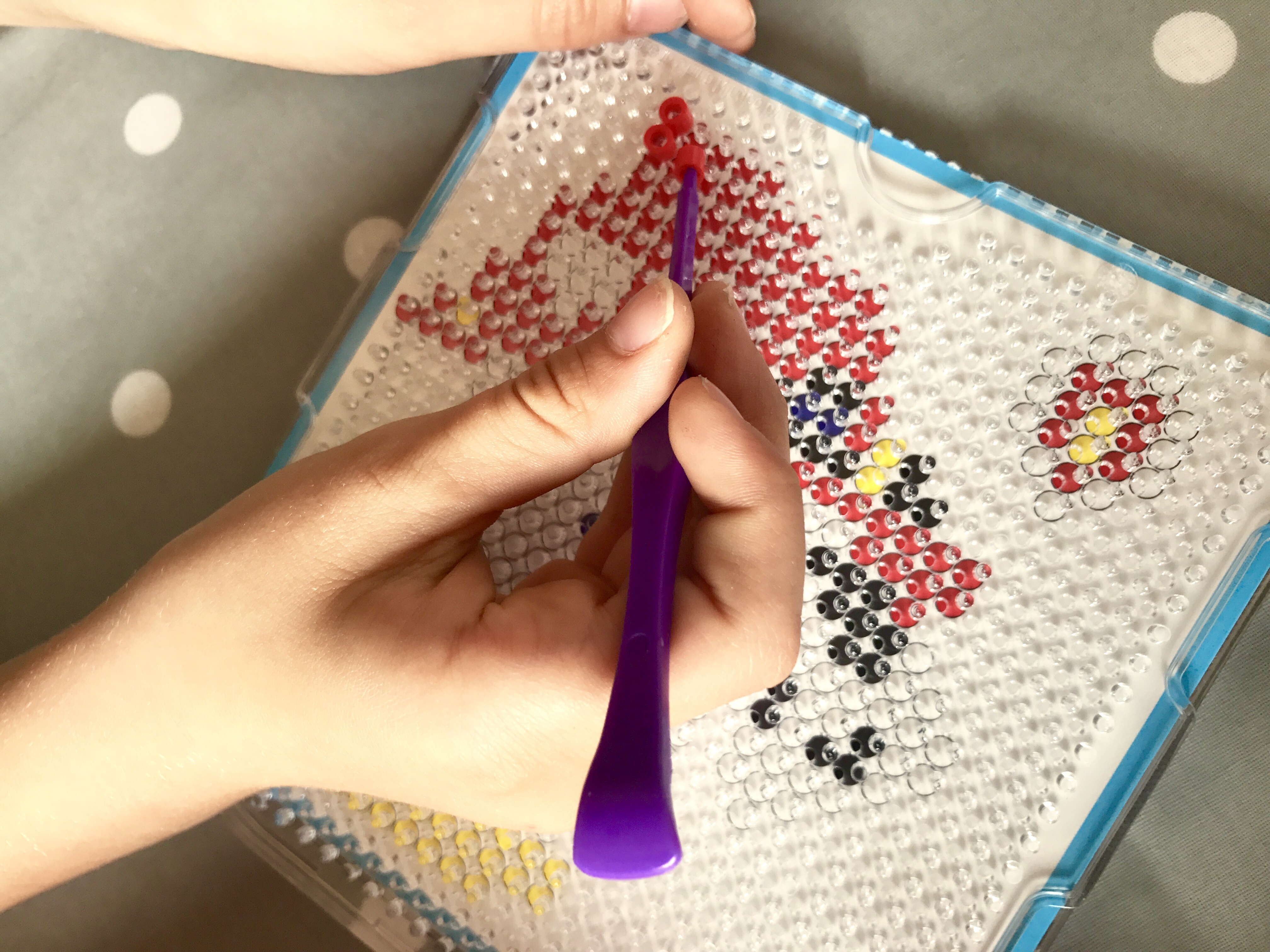 Once the beads were all in place, the kids sprayed it with the water sprayer. The water makes the beads stick to each other so that you can then lift your whole design off the board. The instructions say to leave for half an hour but we found that not all the beads had stuck in this time. We sprayed on a little more water and left it for another 20 minutes, after which it came off fine. Although the beads are stuck together, the finished design is still quite fragile and it would be easy for younger children to over-bend and break them so we’ve put them on Littlest’s bedroom shelf to be safe. 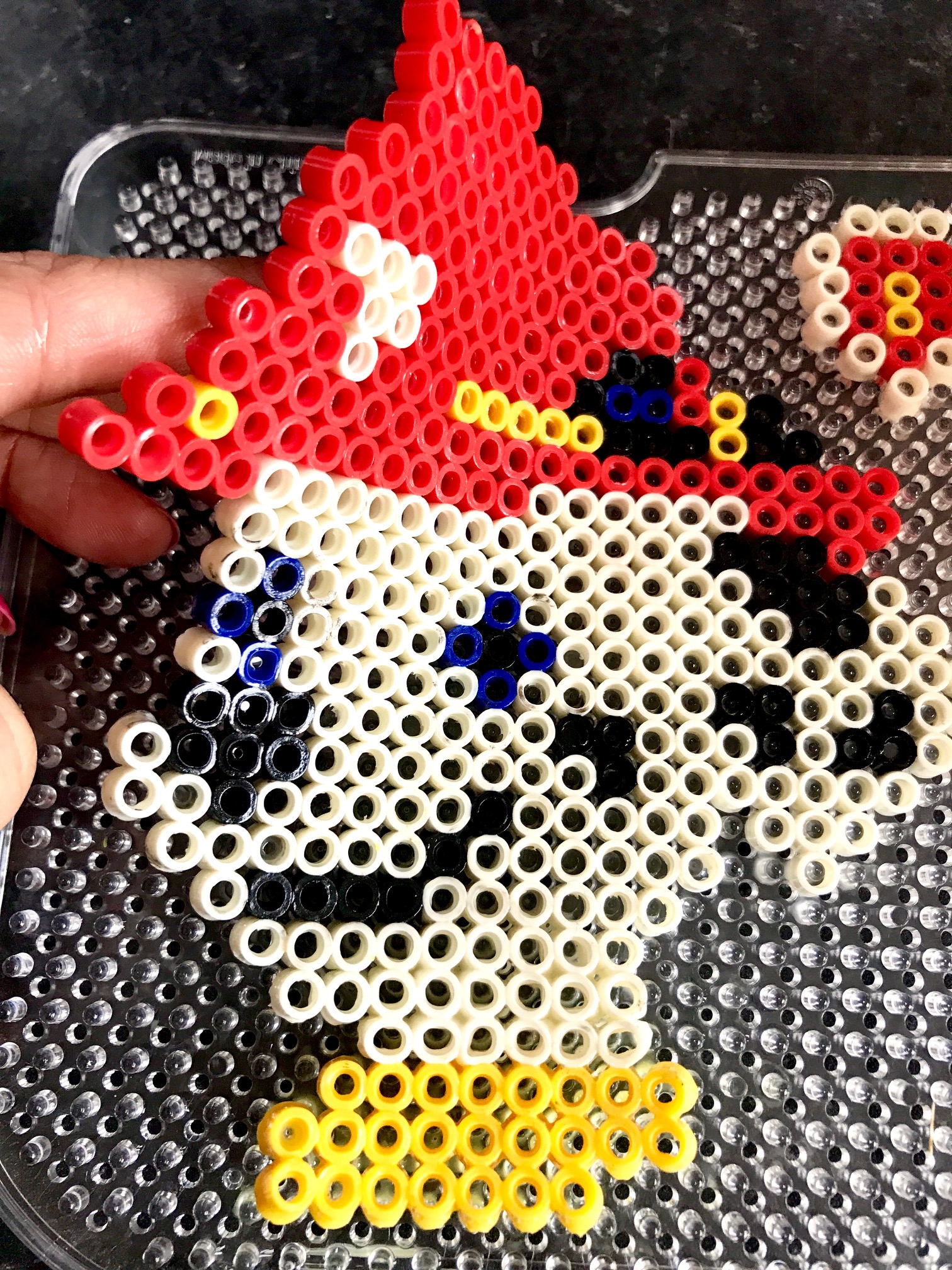 I was surprised by how much Little Man O also enjoyed this activity. He’s not paid much attention to his sister’s beads before. It’s made me think that with the right designs Ezee Beads could be a real winner for him. 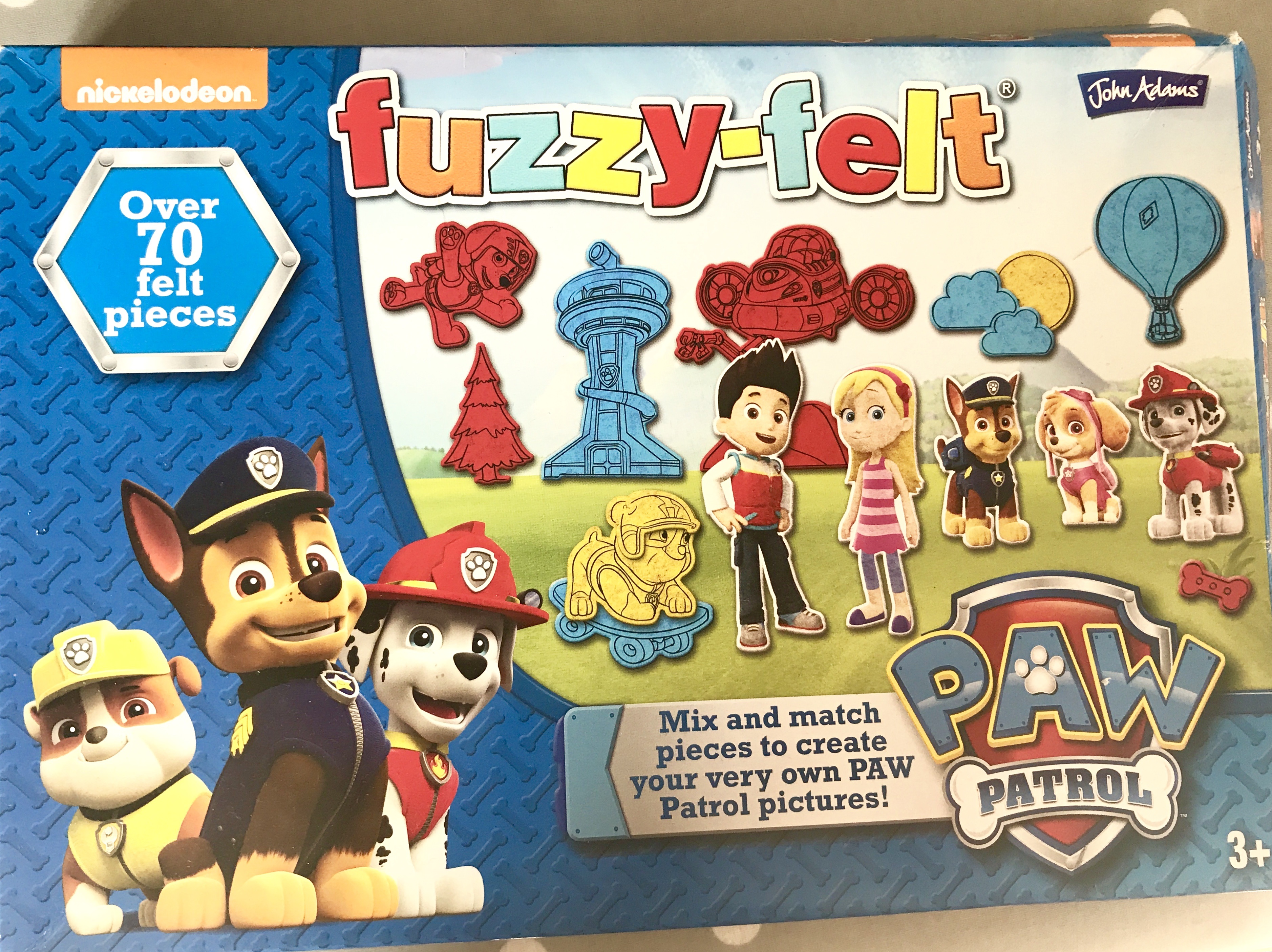 We gave these to Littlest to keep him entertained while on a long car journey recently. It’s a really easy activity for him to do in the back of the car without any mess or breakages and kept him entertained for a good half hour or so.

The set contains 70 fuzzy felt pieces and a green board on which to stick them. There are two types of felts – the colourful main characters which look just like the ones in the cartoons and then the line drawings of key characters, places, and objects from the show on red, blue and yellow backgrounds. 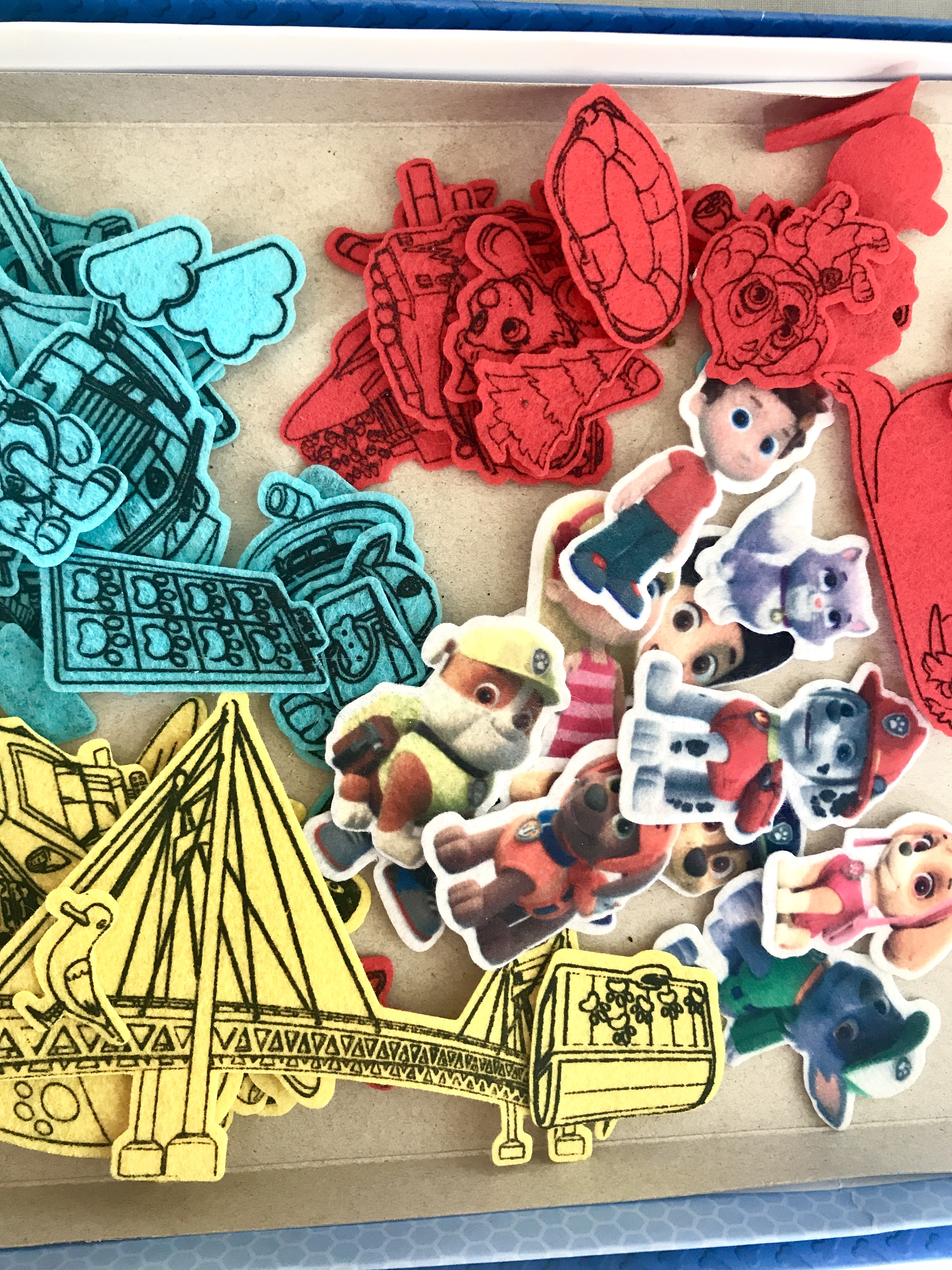 The quality of the felts isn’t as high as other fuzzy felt sets we’ve had previously; the images weren’t as sharp as you might expect. But that didn’t stop Littlest making up his own scenes and using phrases from the show. 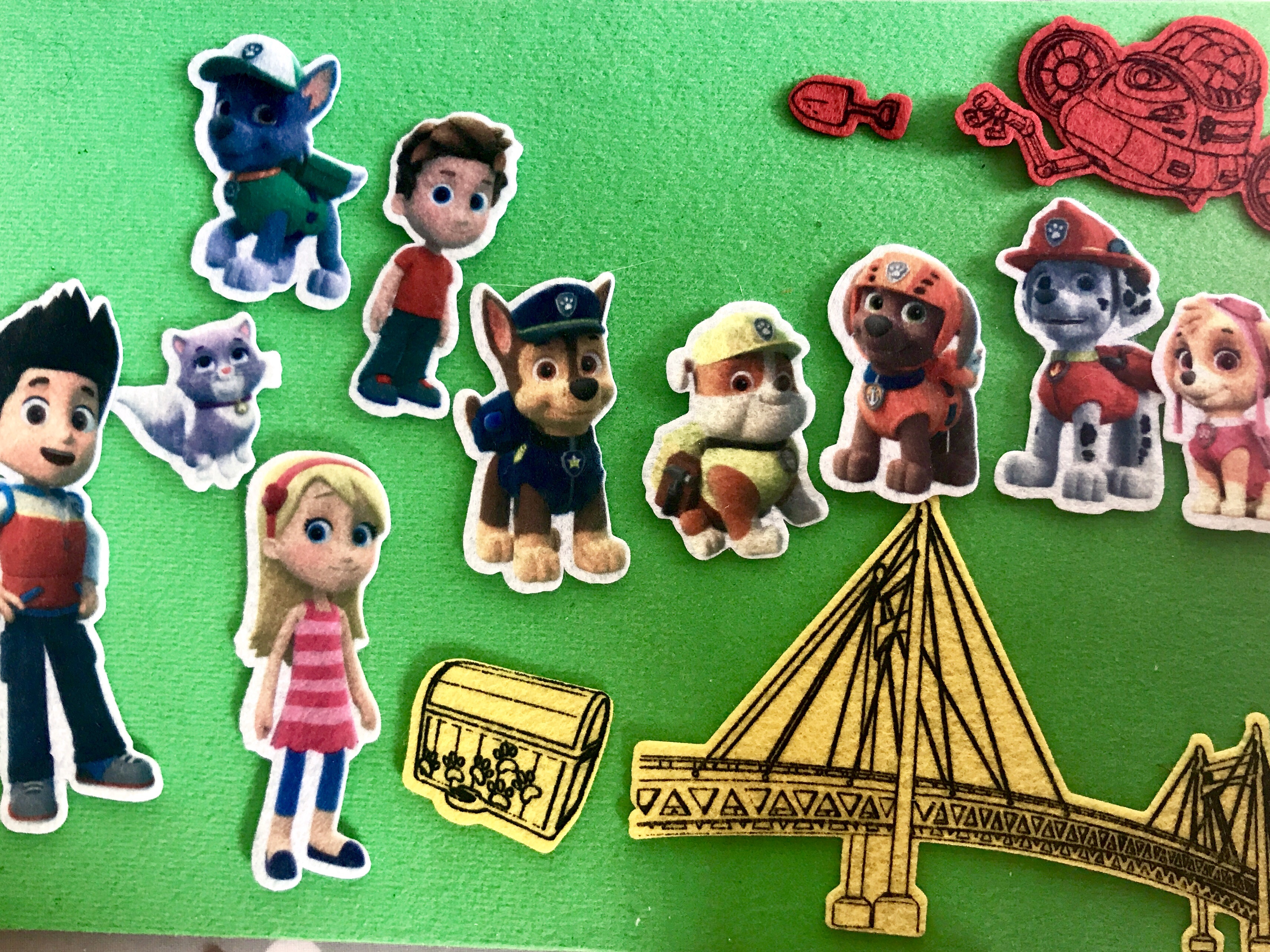 It’s great to see him taking familiar characters and using his imagination to create his own adventures for them.

Little Man O and Little Miss E were so excited to open this set as they’d seen Pixelo advertised on the television so they knew exactly what to do. 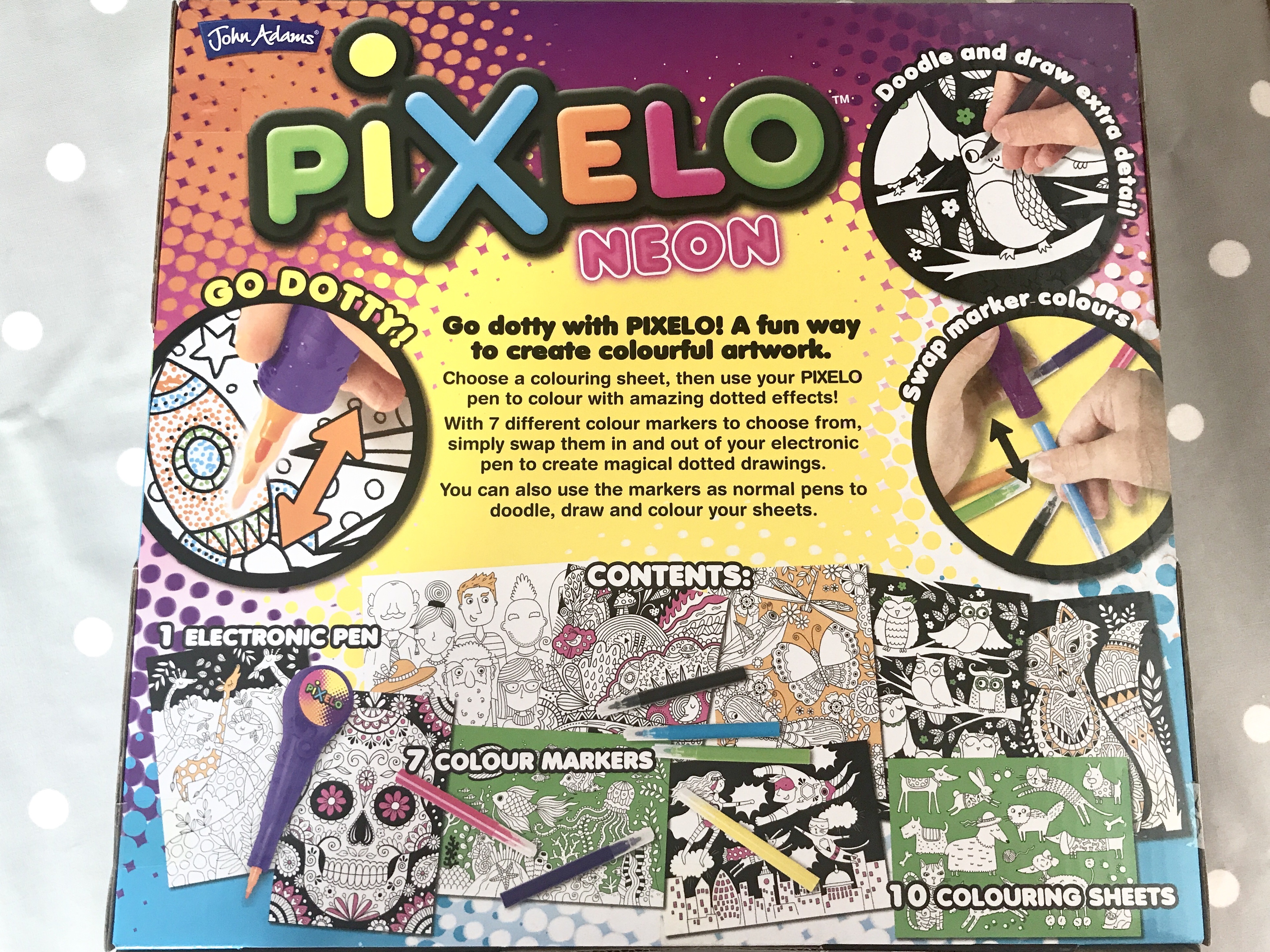 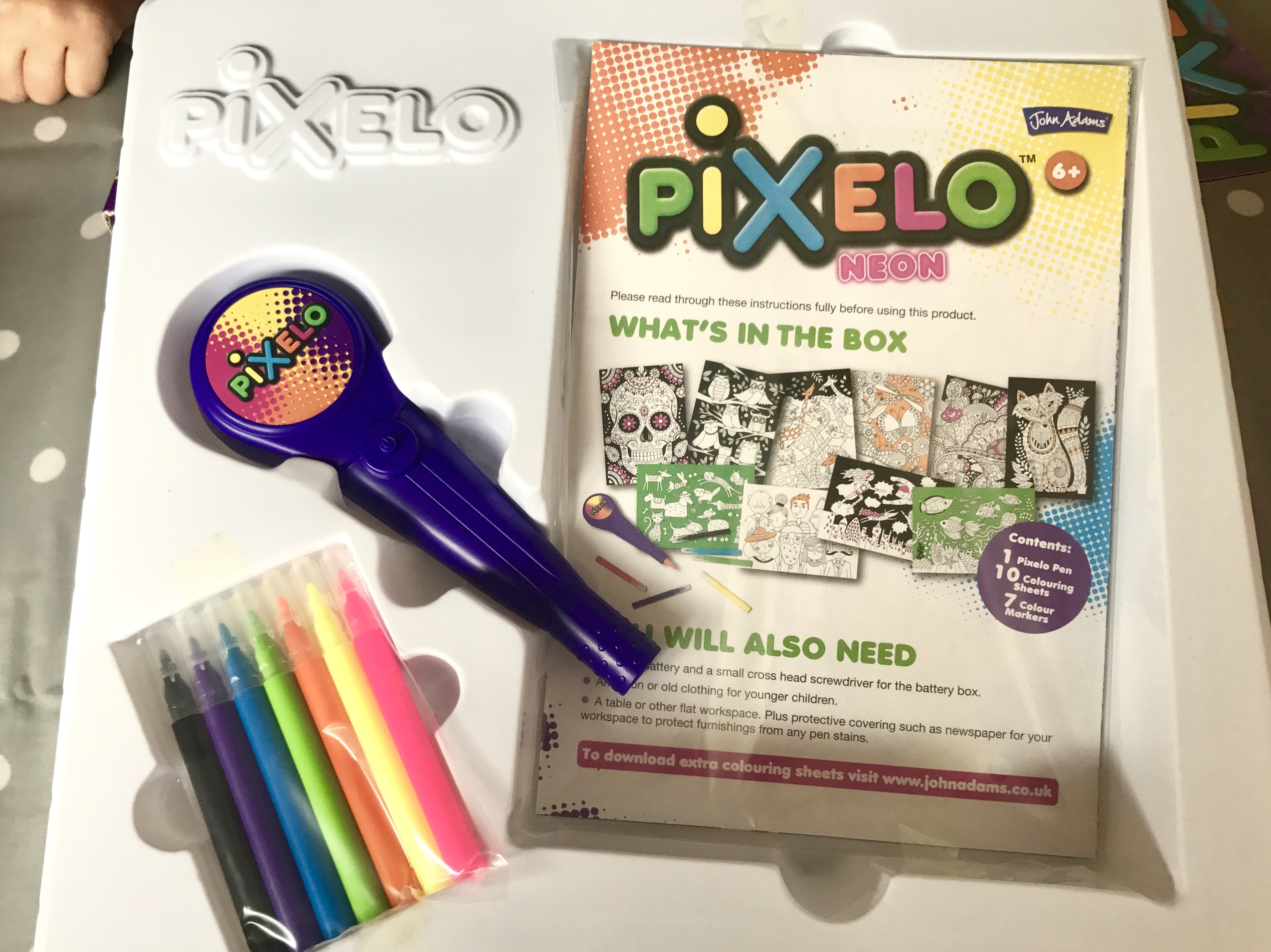 You simply pop the provided pens into the battery operated hand-held device (battery not included) and then when you press the ‘on’ button the pen vibrates up and down, creating a dotting effect on the paper below. 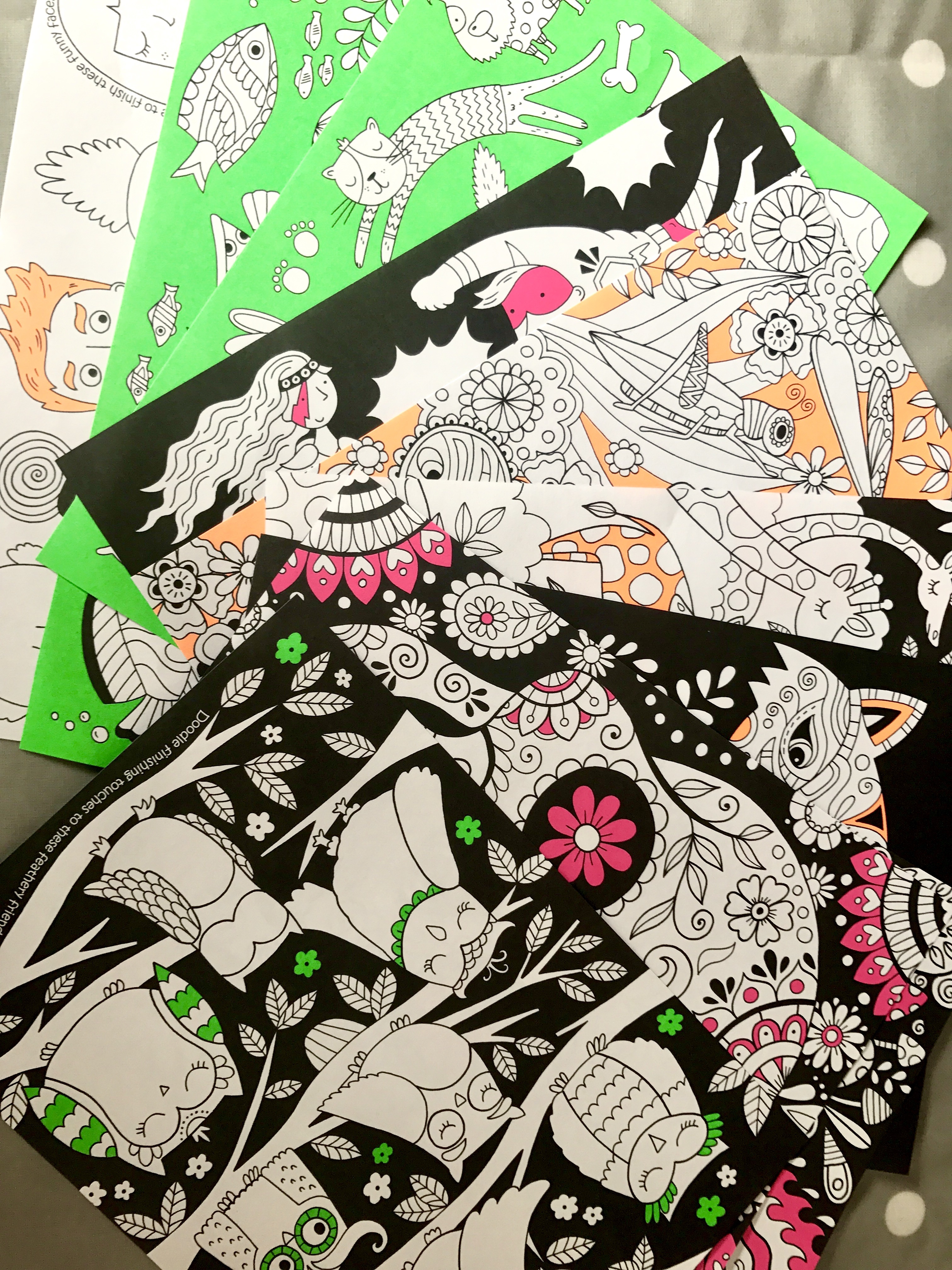 The set contains various black and white pictures for children to colour in but my three also enjoy creating their own designs and patterns on plain paper.

Pixelo is suitable for children aged three and above – so Littlest gave it a go too. He doesn’t quite have the coordination of his siblings but he did his best and absolutely loved it. 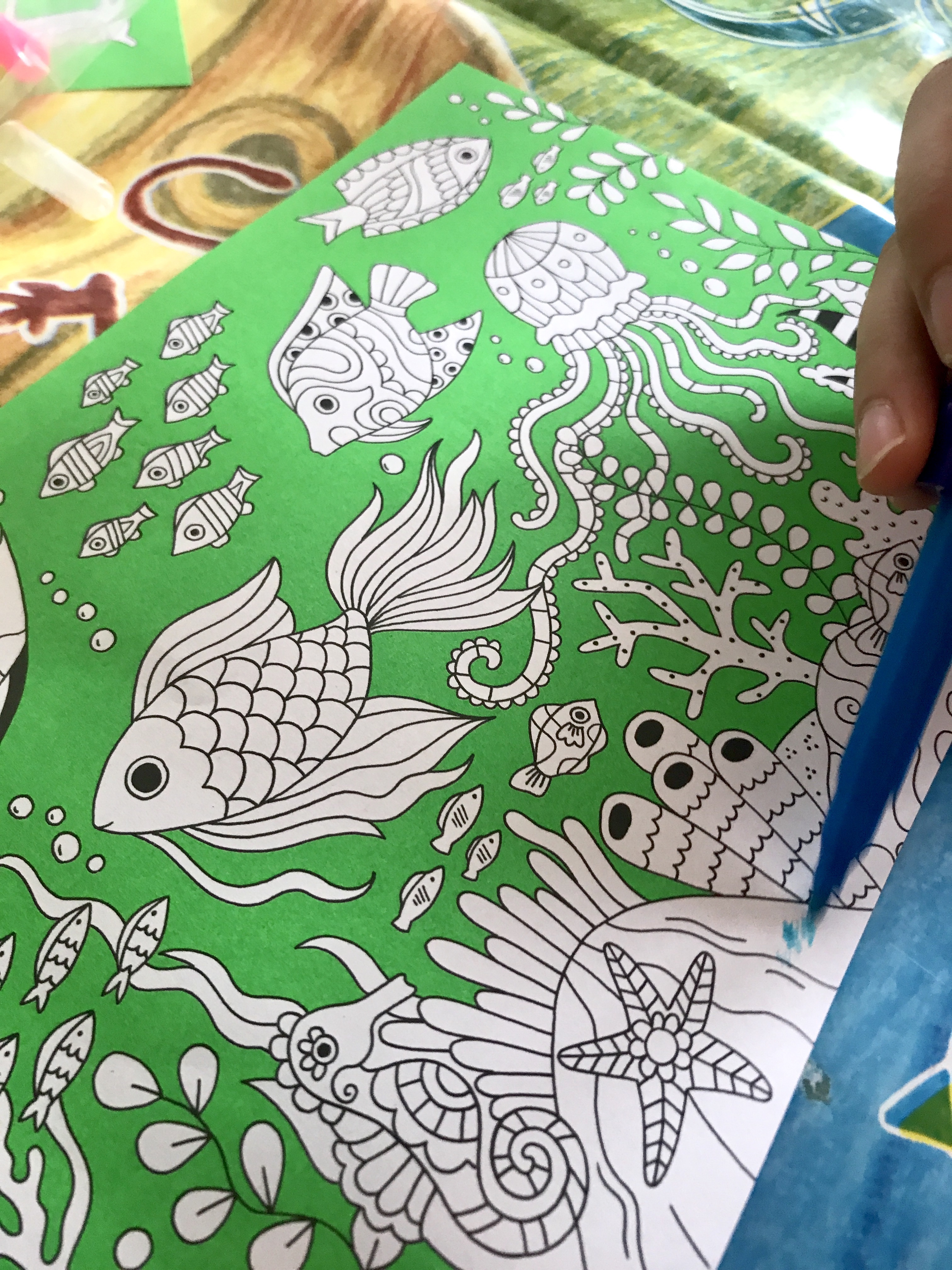 One downside is that you need the special smaller pens to go in the Pixelo pen. We tried it with regular felts but they didn’t quite work. I also thought that with a RRP of £21.99 it was again a little overpriced, although it’s currently on Amazon for £18.50.

Do your children own any of these toys? Let me know in the comments below or by tweeting me on @cardiffmummy

You can see all of our toy reviews here.