Before I tell you about our afternoon at Heath Park, I want to start by saying that earlier that day, my kids had watched an hour of telly, had various squabbles, tipped all the toys all over the floor and refused to tidy them up, eaten chocolate before lunch. I had shouted more than once.

Because that’s what parenting is like. Yes, we have a lot of days out as you’ll know if you read my blog regularly. I love getting out into the fresh air, but I promise you that I have ‘crap parent’ moments too.

So anyway, because I couldn’t face the unmistakable crash of the Duplo being emptied all over floor once more and then not being played with, or kids fighting and telling tales, we grabbed a picnic lunch and headed to Heath Park.

This is one of my ‘locals’ and we spend a lot of time here. I wrote about a muddy morning we had in Heath Park back in the winter, but I thought it was time for an update now it’s summer (well, if you could call it summer, given the weather).

It also gave us the chance to test out some fab toys we’d been given by Wonderlings, a beautiful online store run by two Cardiff mums, which sells traditional outdoor toys and equipment.

I’ll start with the playground. There are two sections for younger and older children. The toddler section has two baby swings, a climbing frame with a slide and a couple of bouncing animals for children to sit on. The older area has big swings, a large wooden climbing frame with a tunnel slide,  rope bridge to climb across and other obstacles. This photo was taken a little while ago – when four-year-old Little Man O was so pleased to finally be able to make his way across after months of apprehension. 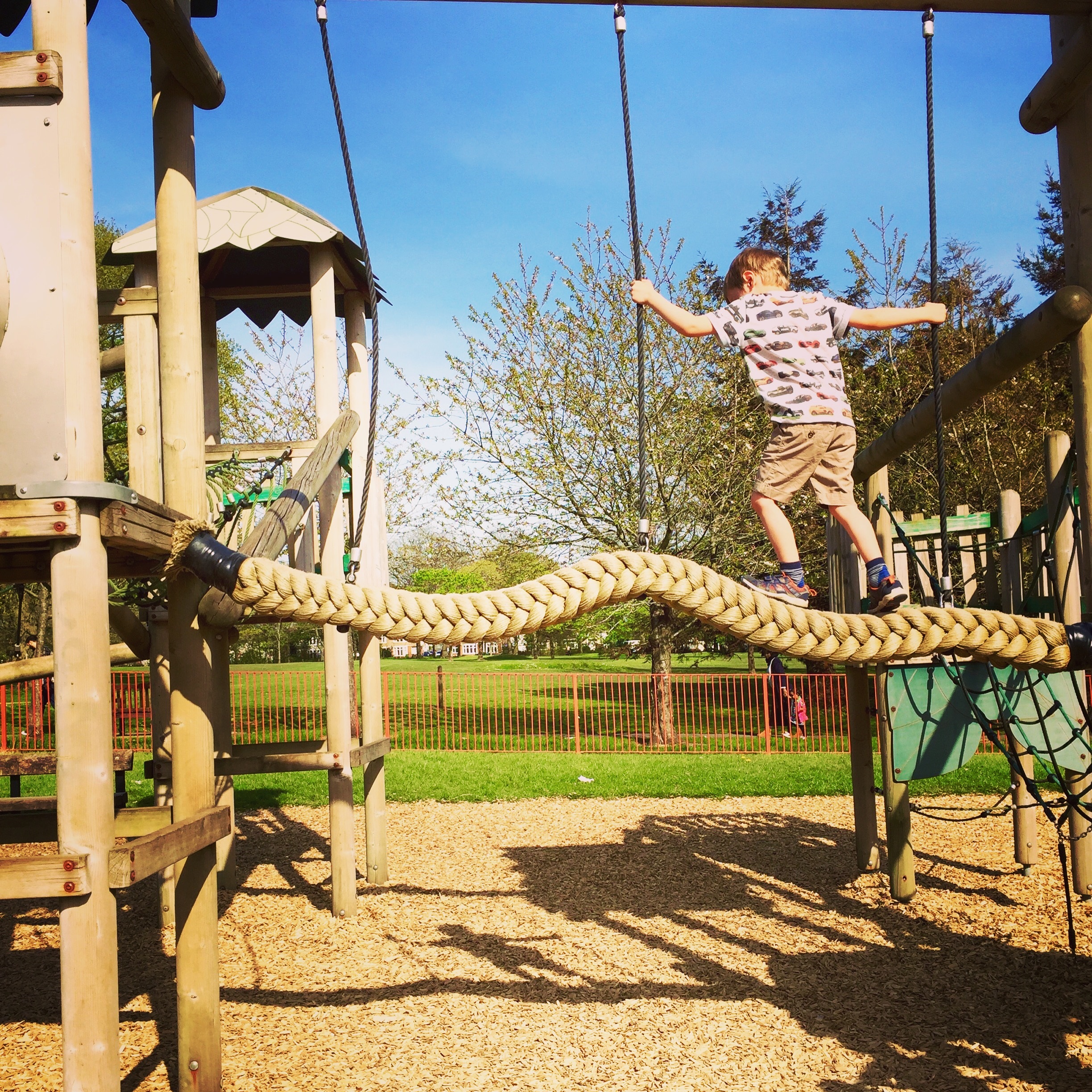 We spend a lot of time in this playground. However, when we headed to Heath Park on this particular occasion, we were there for almost four hours – and didn’t venture anywhere near the playground.

We climbed fallen trees, played games in the woods, had a picnic, ran through the long glass, collected sticks, and had our own mini sports day. All without relying on the park to entertain us.

Have that, shouty mummy me from this morning!

We chose one of the fields along King George V Avenue as our base for the afternoon. I love all the open space around here. 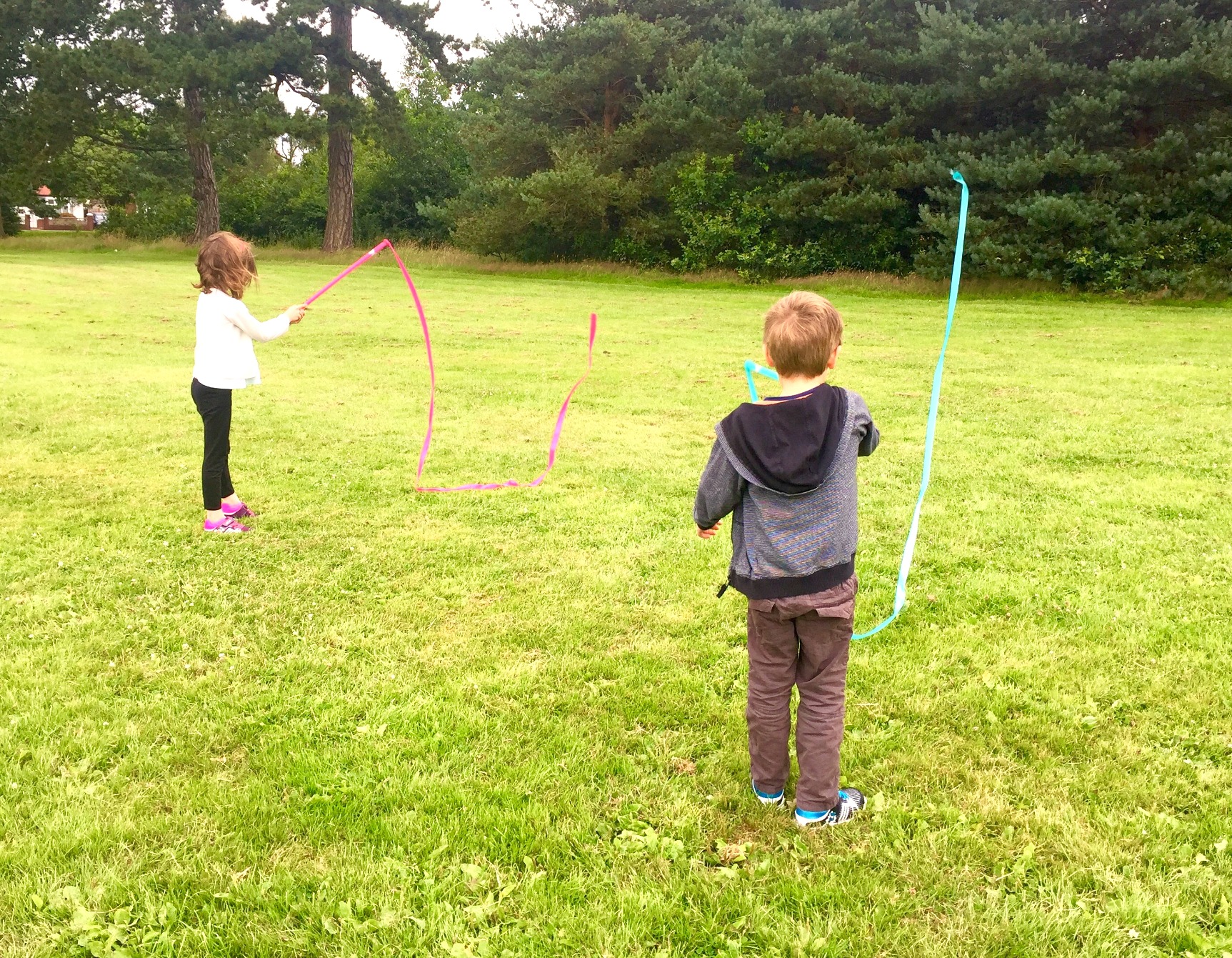 I’d bought some rhythmic gymnastic ribbons reduced in Asda a few days earlier for £1 each– and my children love them. Little Man and his big sister, 6½-year-old Little Miss E, absolutely love them and they had great fun chasing each other around  and twirling their ribbons.

They came up with the idea of using the ribbons as finishing lines for running races, limbo sticks and a high jump, and we had great fun wriggling under and jumping over them. The sight of Mummy doing this is apparently so hilarious they were in fits of giggles. 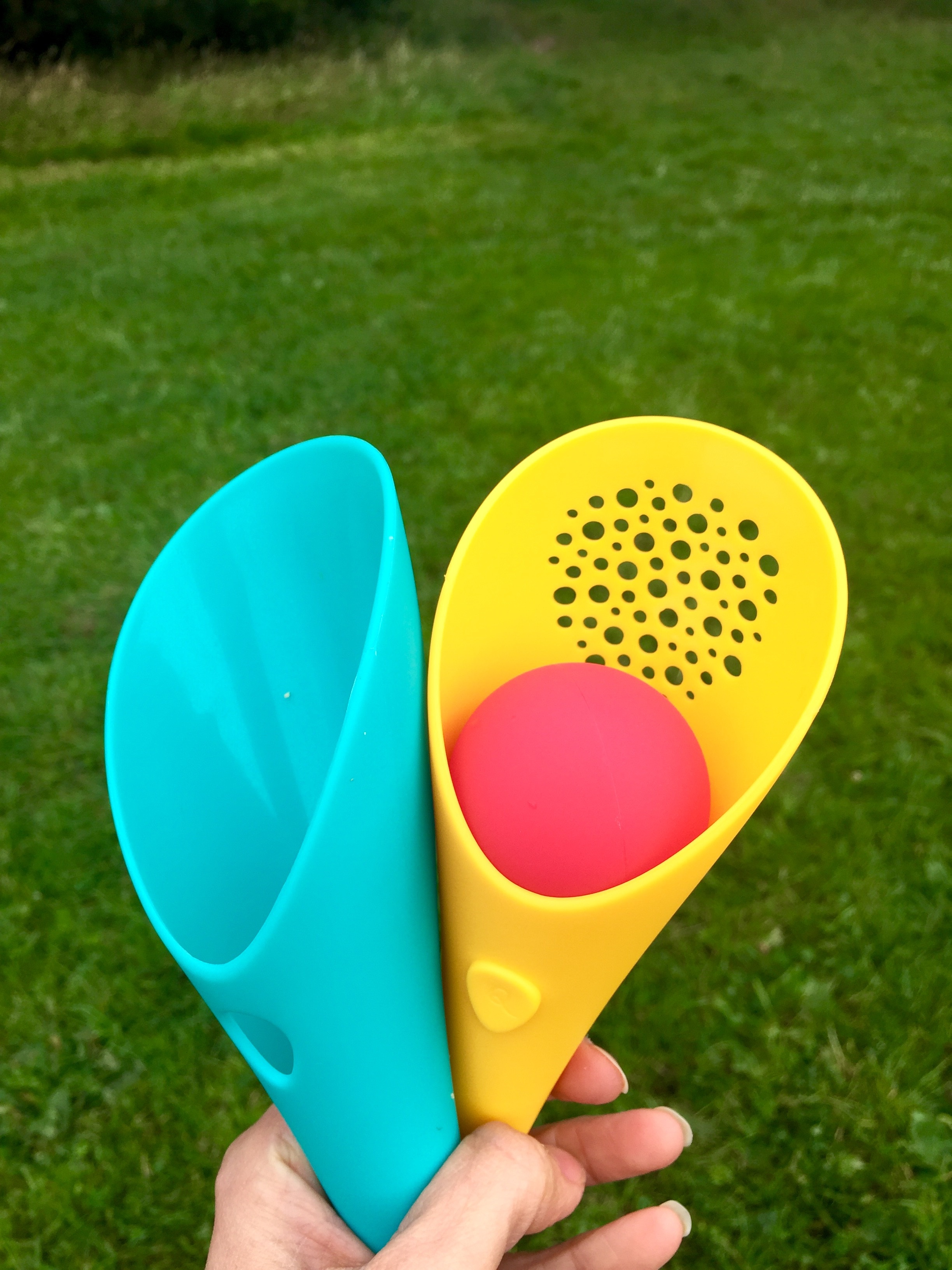 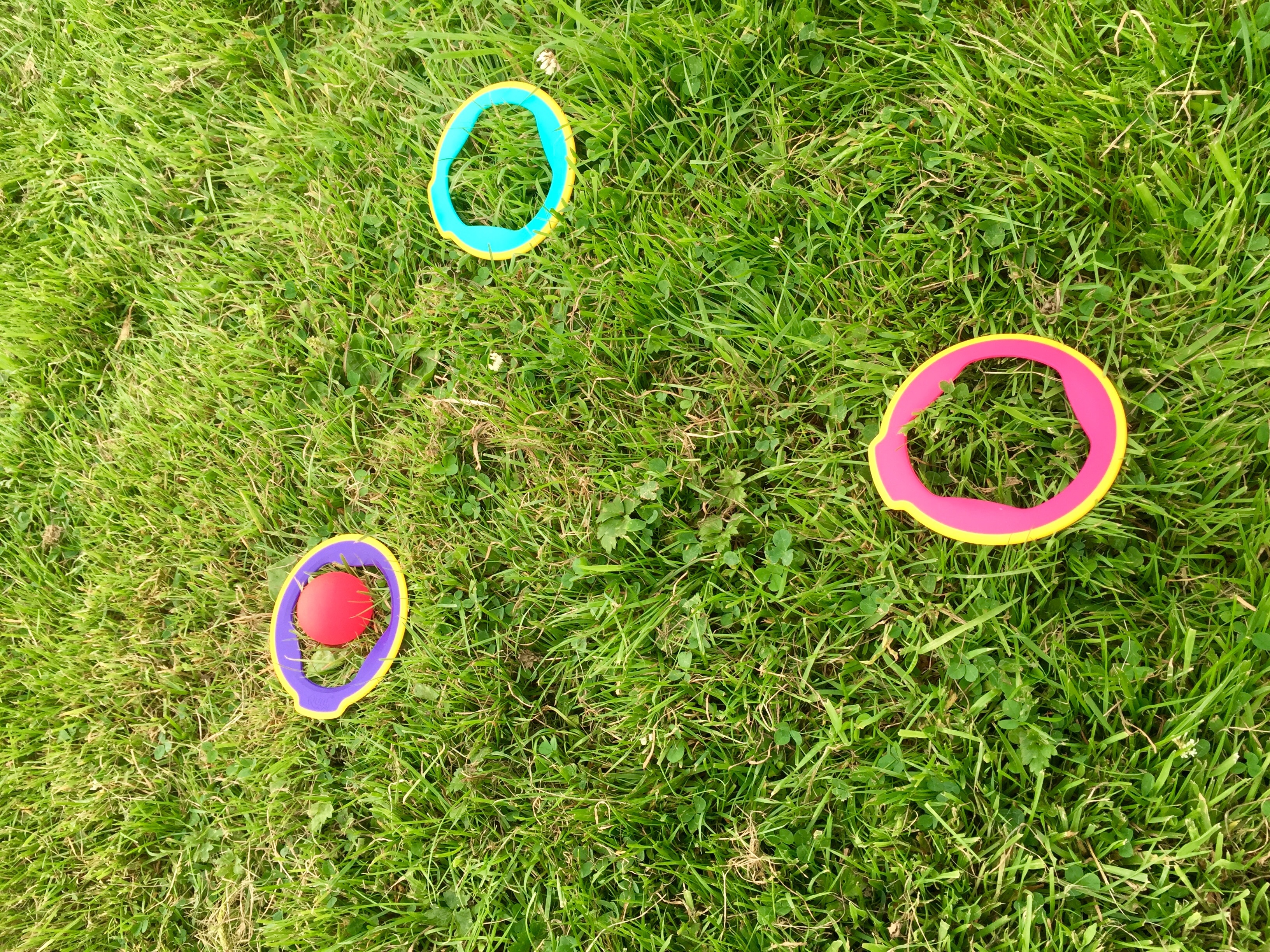 We played Cuppies and Ringo with the sets we’d been sent by Wonderlings (£7 each). Possibly Ringo would work better on a flat, sandy surface, but we had fun regardless.

The nearby long grass was great for exploring. My children weren’t very impressed with my lack of knowledge on what everything is called, however. 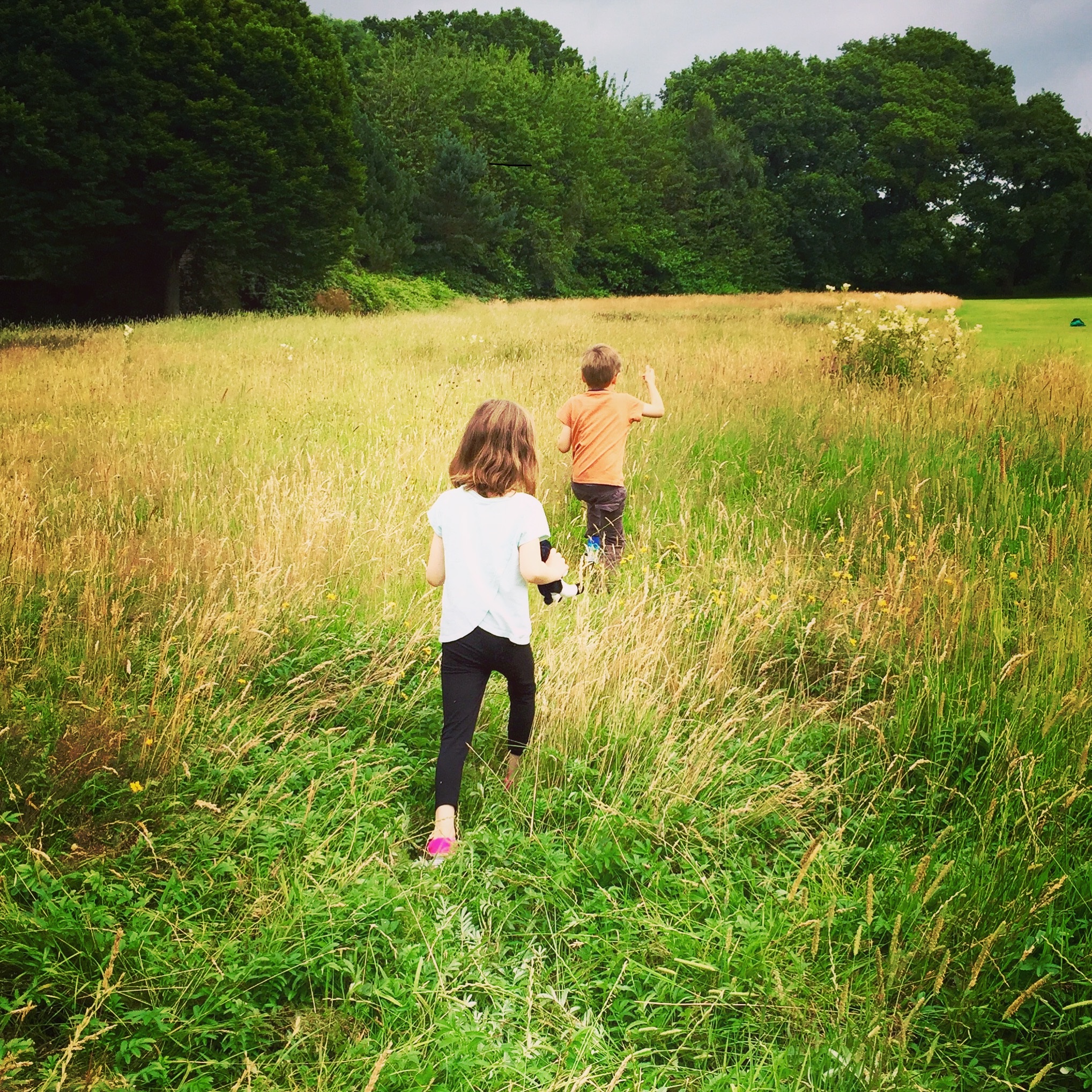 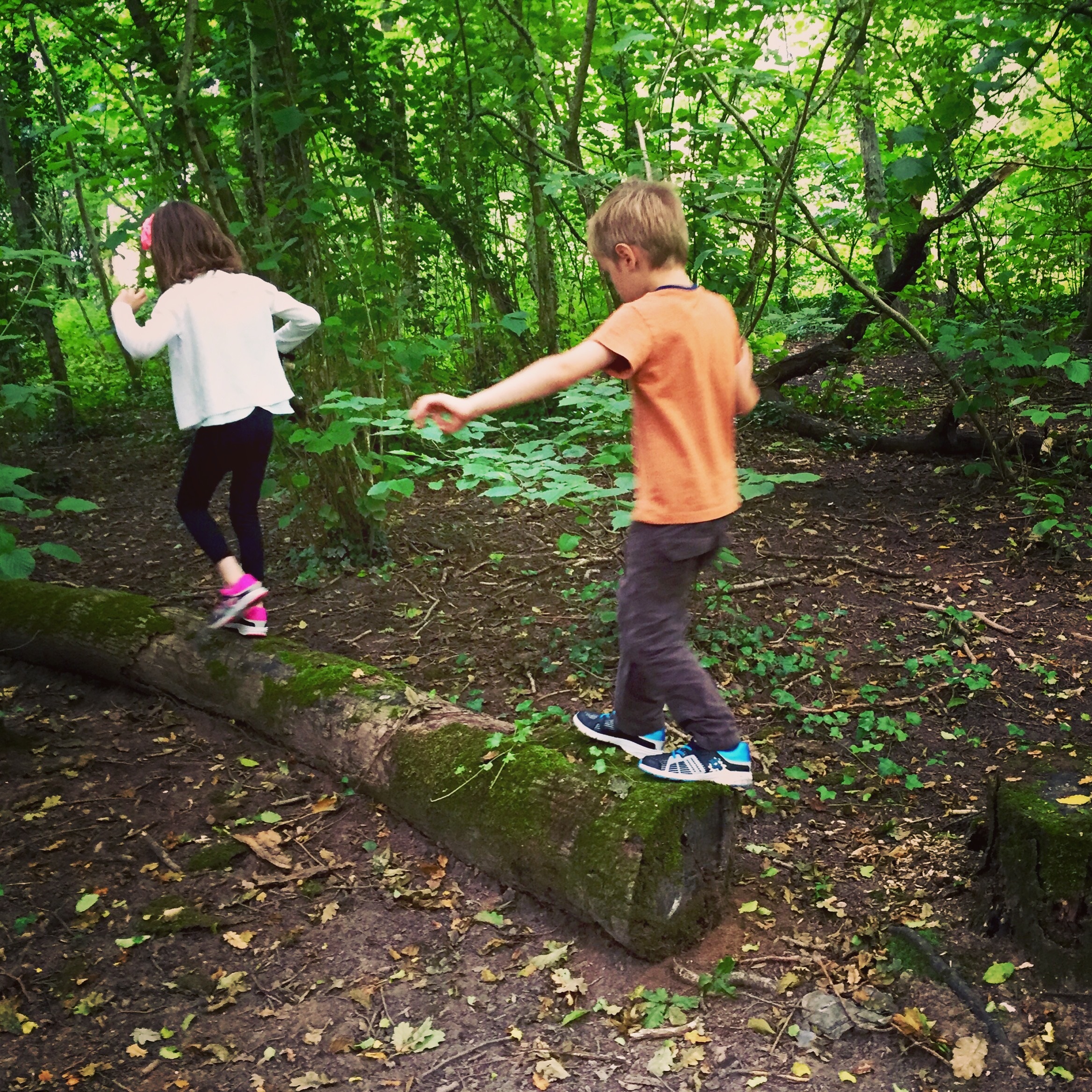 After demolishing our picnic lunch, we headed into the woods, where we found trees to balance and climb on, and Toddler Boy I, my 2¼-year-old relished in his favourite hobby of collecting sticks.  The big two invented a game where they were homeless children living in the woods and I had to take them home to love with me. I love to see their imaginations taking over, but thank goodness there were no bystanders, wondering what one earth that was all about! 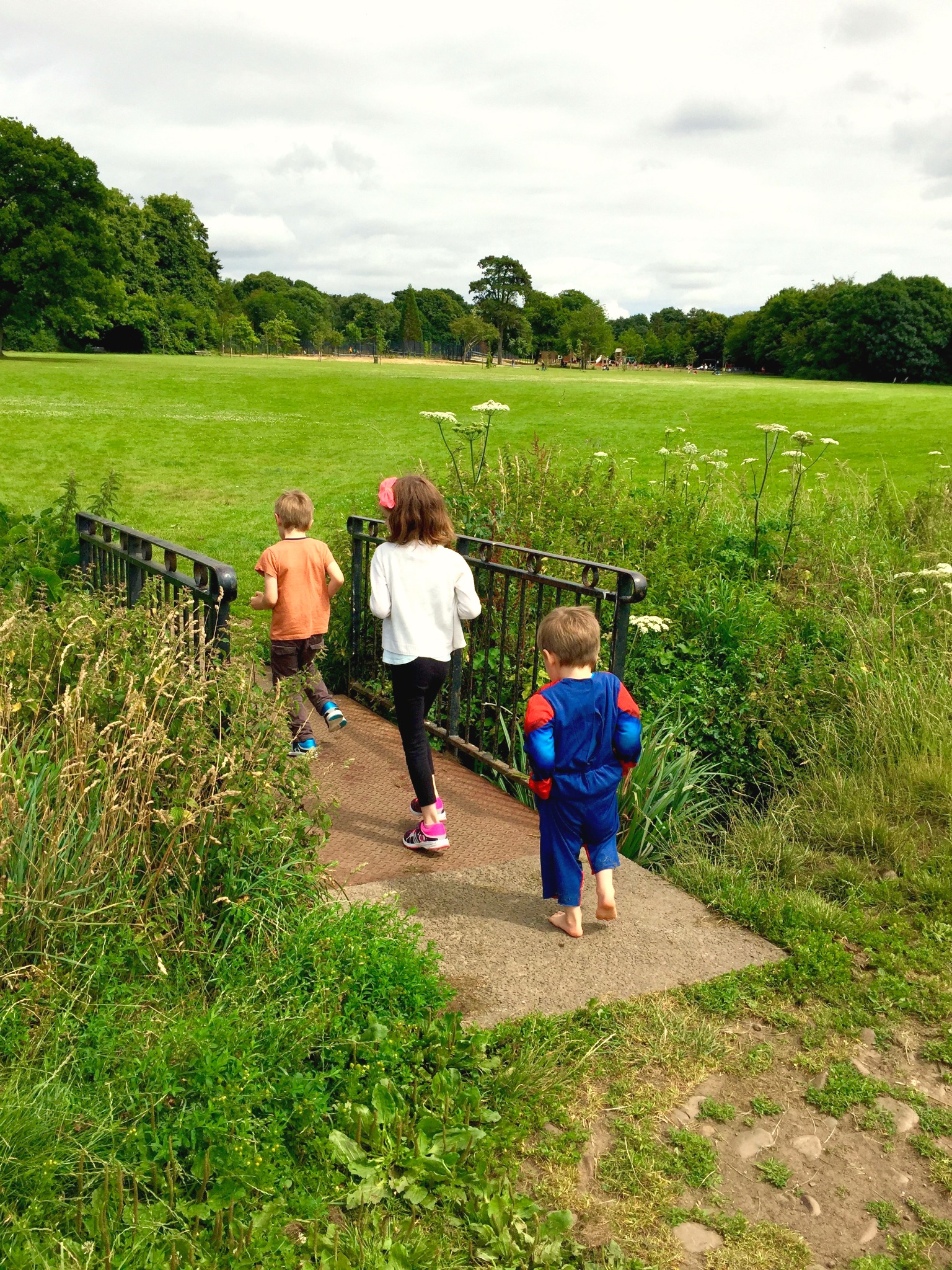 From there, we headed over to the little bridge, where we trip-trapped over in the style of the three billy goats and the troll. We had some cartwheel and handstand practice, walking like wheelbarrows (which Toddler especially enjoyed) and horsey rides, where Toddler sat on this big brother and sister’s back and they crawled along the floor.

I will say the one downside of Heath Park is that there are no real toilet facilities, other than the golf hut near the playground, and these never seem to be open. Thankfully, my children are okay with weeing al fresco and we were spared any nappy incidents from Toddler!

Other than taking photos, I didn’t check my phone once. And no one complained they were bored or wanted to go home.

Good old fashioned fun, letting our imaginations entertain us, without the rows and mischevious behaviour we’d been having at home, and without spending a penny too.

Have you been to Heath Park? Do let me know in the comments section below, on the Cardiff Mummy Says Facebook page or by tweeting me on @cardiffmummy

It’s also worth checking out the model railway, run by the Cardiff Model Engineering Society, based at Heath Park. They have monthly open days once or twice a month. The next dates are Sunday 28th and Bank Holiday Monday 29th August and Sunday 11th September, 1pm-5pm. Entrance costs £1.50 per person, with rides £1.50 each. Under 4s are free.  More information here.

And check out the Cardiff section of Cardiff Mummy Says for more ideas of local family-friendly events and days out. 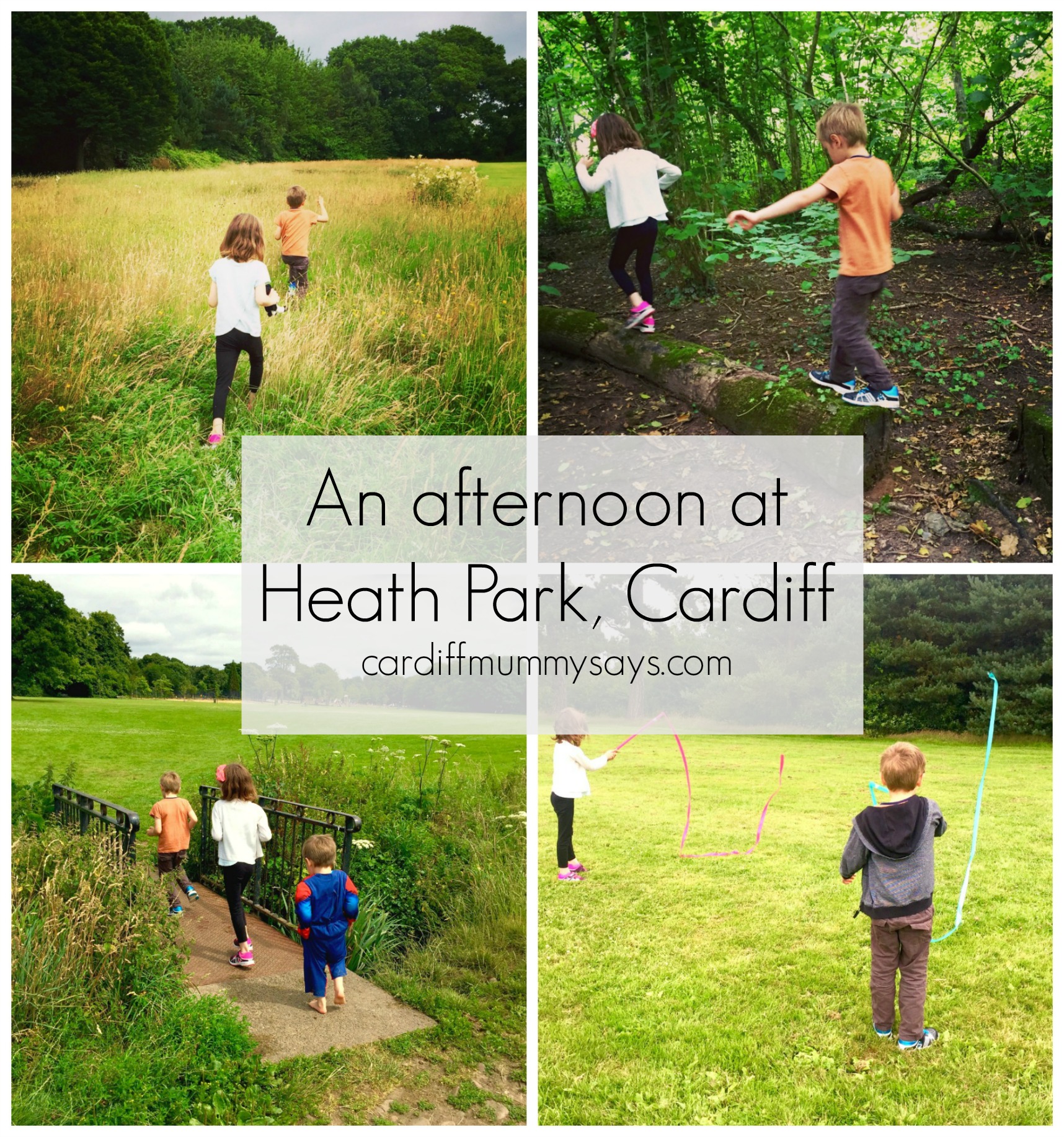