I love reading bedtime stories with my children, it’s one of my favourite parts of the day, and it seems to be one of theirs, too. Away from the books, I also love seeing the tales they create when their little imaginations are left to run free. I love how a simple washing basket can be a boat, a snail’s shell or a lion’s cage. Or how the settee can be a pirate ship or a princess castle, and an empty kitchen roll can be a telescope or a fairy wand. Some days my children are doctors, vets or shopkeepers, other days they are mummies and daddies, or school teachers and pupils. Creative play knows no bounds and I love that the worlds and narratives they create help them to make sense of what is happening around them.

So when children’s bed specialists www.roomtogrow.co.uk challenged me to create a story with my children to coincide with National Tell A Story Day, I was excited to take part.

This is actually an American celebration, which takes place on April 27th each year, but is gathering momentum in the UK too – although we’re lucky enough to also have our own National Storytelling Week in January. Tell A Story Day encourages people to get together to tell stories of all kinds – from books, from memory or from their imaginations.

Our challenge was to create a story involving a character, location and an object chosen for us by another blogger, in our case Mummy McAuliffe.

We sent her some inspiration for her story, in the form of a fluffy guinea pig called Elsa, the location being a farm and a pair of magic socks as the object. No prizes for guessing Little Miss E, my five-year-old daughter came up with these ones. Mummy McAuliffe and her daughter decided our story would be about a little girl called Lily, set in the best cake shop in the world, with the object being the Queen’s birthday cake.

I know Little Miss E would have loved conjuring up this tale, but I decided to ask Little Man O, my three and a half year old son, to create something by himself. He usually loves pirates and knights and adventures, so I was curious to see what he would come up with out of the shadow of his big sister. He didn’t bat an eyelid at the female character and surprised me with his creative language and vivid imagery.

The story he wrote, with a little help from me, is below, accompanied by the picture he drew to accompany it. He asked me to outline a castle for him, but he joined the dots and did the rest. I also thought it would be a good opportunity to help his writing practice, with a few key words from the story.

He was so proud when we told his story to the rest of the family before bed and I’ve promised both him and Little Miss E that we can create some more stories soon too.

It got me thinking that perhaps some Cardiff Mummy Says readers would like to take part in the challenge too, so here are a few scenarios that might inspire you.

* A girl called Amber – a spaceship – a cuddly monkey

* A boy called Jack – a supermarket – a trolley

* A girl called Sophia – the park  – a magic dandelion

Let me know if you decide to create a story of your own, either in the comments below, on the Cardiff Mummy Says Facebook page or by tweeting @cardiffmummy 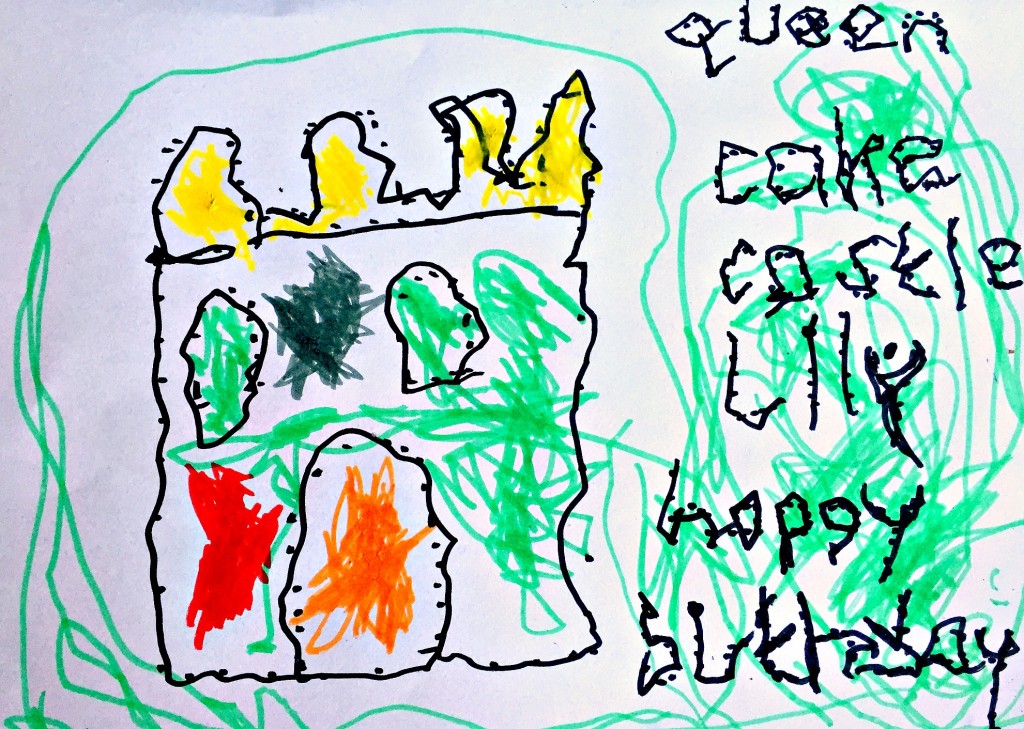 By Little Man O, aged 3.5, with a little help from Cardiff Mummy

Lily has brown hair with a little bit of white and yellow. She is four. She lives in a castle. It’s got orange, red and yellow on the roof, and silver and gold. It is a beautiful castle.

It was the Queen’s birthday and Lily wanted to do something kind to say happy birthday and thank you to her Grandma for looking after her. She’d already got a present for the Queen – more dominos. She also wanted to get the Queen a birthday cake to say thank you for being the best Grandma in the world.

She went into the sweet shop and saw so many cakes. Big cakes, bigger than anyone else’s cakes. Some were orange, some were white and pink. One had a leg on it. Not a real leg from a person. A sweetie leg. Lily tried a bit and it tasted yum yum yum yum yum yummy in her tummy.

In the middle of the shop was a cake in the shape of a castle. It was bigger than all the other cakes in the shop. Lily told the man in the shop she would like this one. “Thank you,” she said. The cake looked heavy but Lily was a super strong princess and she carried it all the way home and she did not drop it and did not eat even one little bit.

The Queen was so happy to see the cake. She invited the whole kingdom in to the castle to share it. The people were so happy and said ‘thank you for inviting us to the party’. All the children got party bags and all the grown-ups too. When everyone went, Lily realised she had not had any cake as she was too busy making slices for everyone else. She was so sad. “Don’t worry,” said Grandma who is also the Queen. “I saved you a piece to say thank you. This is the best birthday ever.”