The 2003 film Elf is one of my all-time festive favourites, watched without fail every year. It’s the heartwarming story of Buddy (played by Will Ferrell) who is brought up as an elf after accidentally crawling into Santa’s sack as a baby and being brought back to the North Pole. As an adult he discovers he’s human and goes in search of his real father, the uptight Walter Hobbs, who lives in the cynical city of New York. No one there believes in the magic of Christmas and they all think Buddy is completely crazy for claiming to be an elf from the North Pole and being friends with Santa. But that all changes when Santa’s sleigh gets grounded in the city and they must conjure up the Christmas spirit to help him fly again.

The stage version Elf the Musical has been wowing audiences since it opened in Broadway in 2010 and the West End in 2015 – so I couldn’t wait to see it for myself at Cardiff’s Motorpoint Arena as part of its Christmas tour. 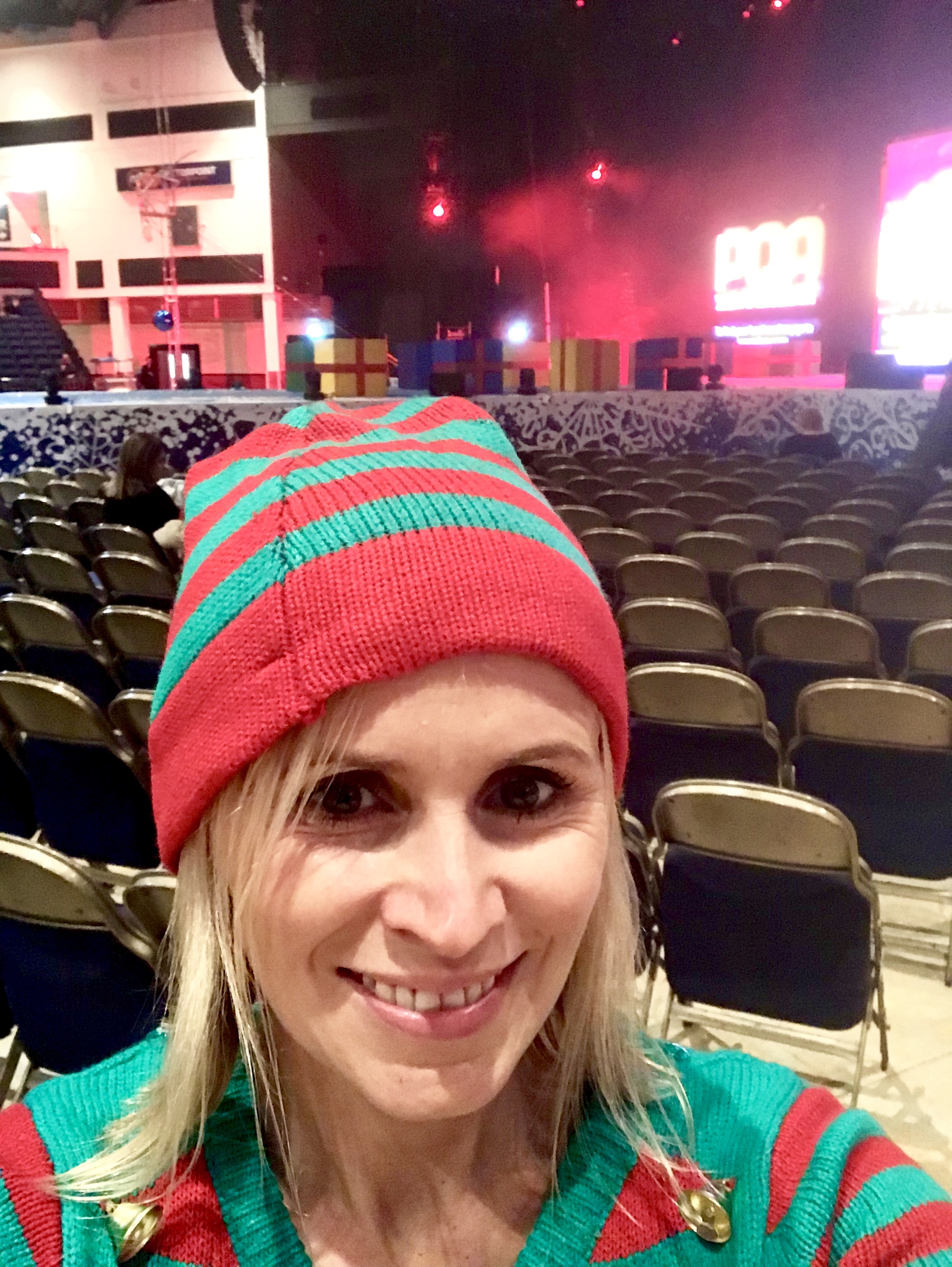 The kids and I were dressed in elf costumes – what else would you wear?! Even before the show had properly begun, the 5,000-strong audience were being warmed up with a team of elves and police officers, darting around the arena hunting for a missing elf.

The show itself takes place on a 70-foot wide stage and a 60-foot long peninsular jutting out into the centre of the arena. Giant screens at the back of the stage focus close up on the cast as well as providing the background scenery. There were a few small differences from the film but all the classic scenes and famous lines were included. “Santa! I know him!” in particular getting a great reception. 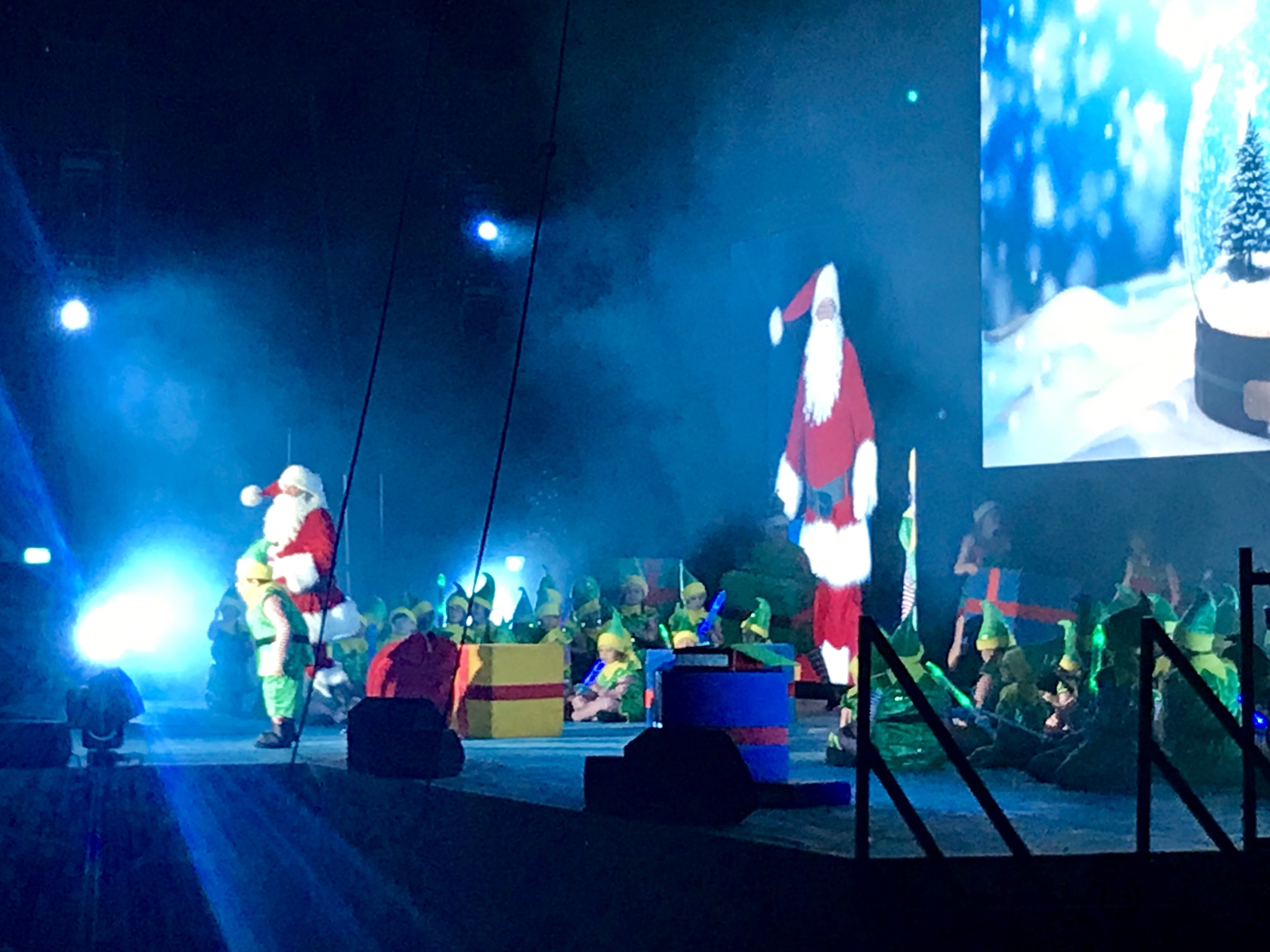 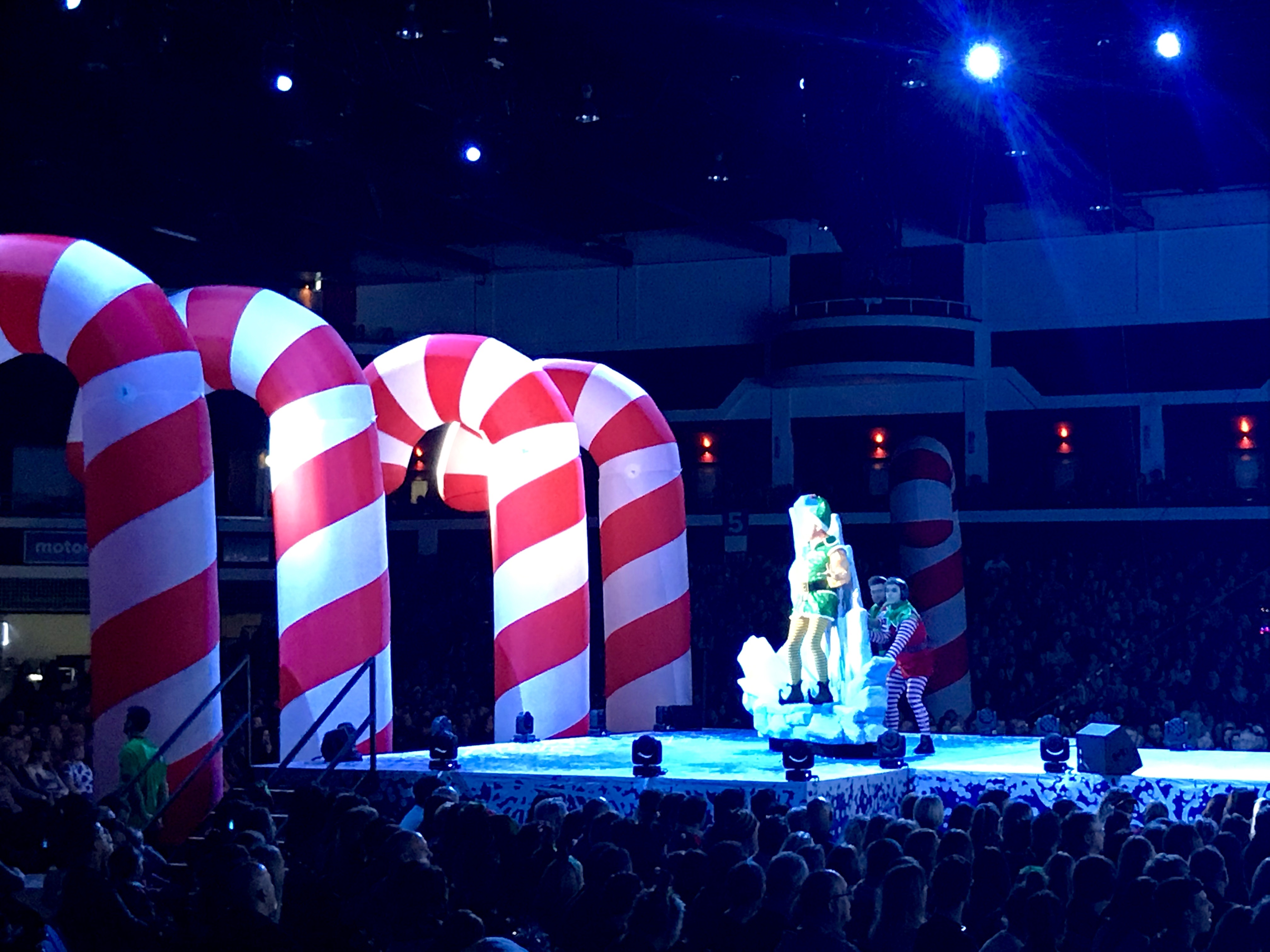 I have mixed thoughts on the production. The Christmas obsessive in me loved seeing the film being brought to life here in Cardiff. But the theatre critic in me felt it wasn’t quite as strong a production as it could have been.

Being staged in such a large venue meant it lacked the intimacy you’d get in a theatre and I never felt as close to the action as I’d have liked. There also seemed to be a few issues with the sound, plus there were a couple of panto-esque moments which jarred with the musical feel.

At times the props blocked the view of the stage (we’d been prewarned about this in the area we were sat). It never lasted too long although it was a little frustrating for audience members as tickets weren’t cheap for the show at around £45 per person. However the space was well-utilised with incredible theatrics and special effects providing a real wow factor (even if they were a little unrelated to the story). A unicyclist balanced on a tightrope; a duo of acrobats performed an impressive routine above the stage; Santa somersaulted off a giant seesaw swing; and a team of Santas bounced from a trampoline onto a platform with incredible precision and synchronicity. And then there was the breathtaking moment Santa’s sleigh flew around the arena. Pure magic. (Visit my Instagram Stories highlights if you want to see for yourself.) 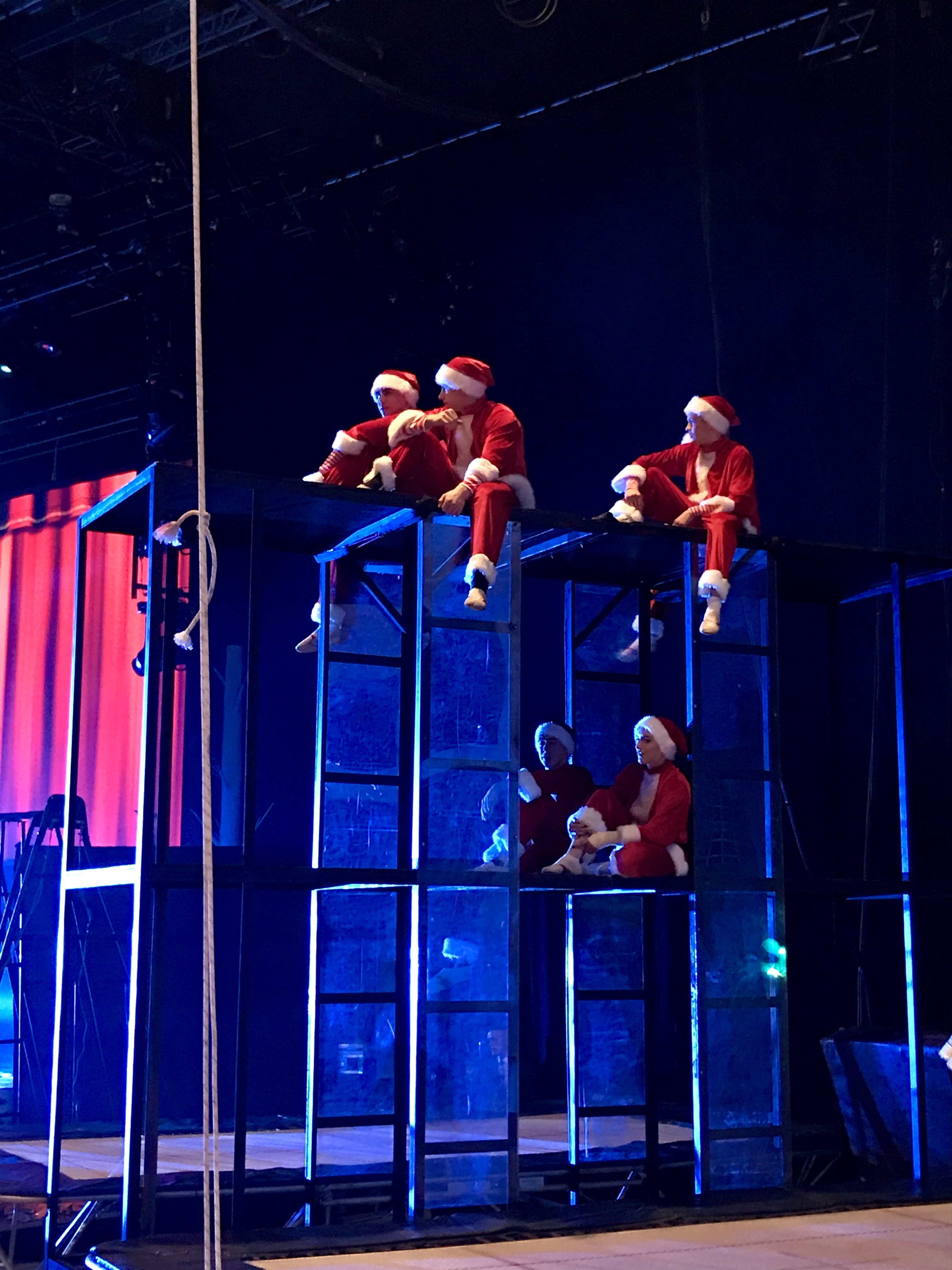 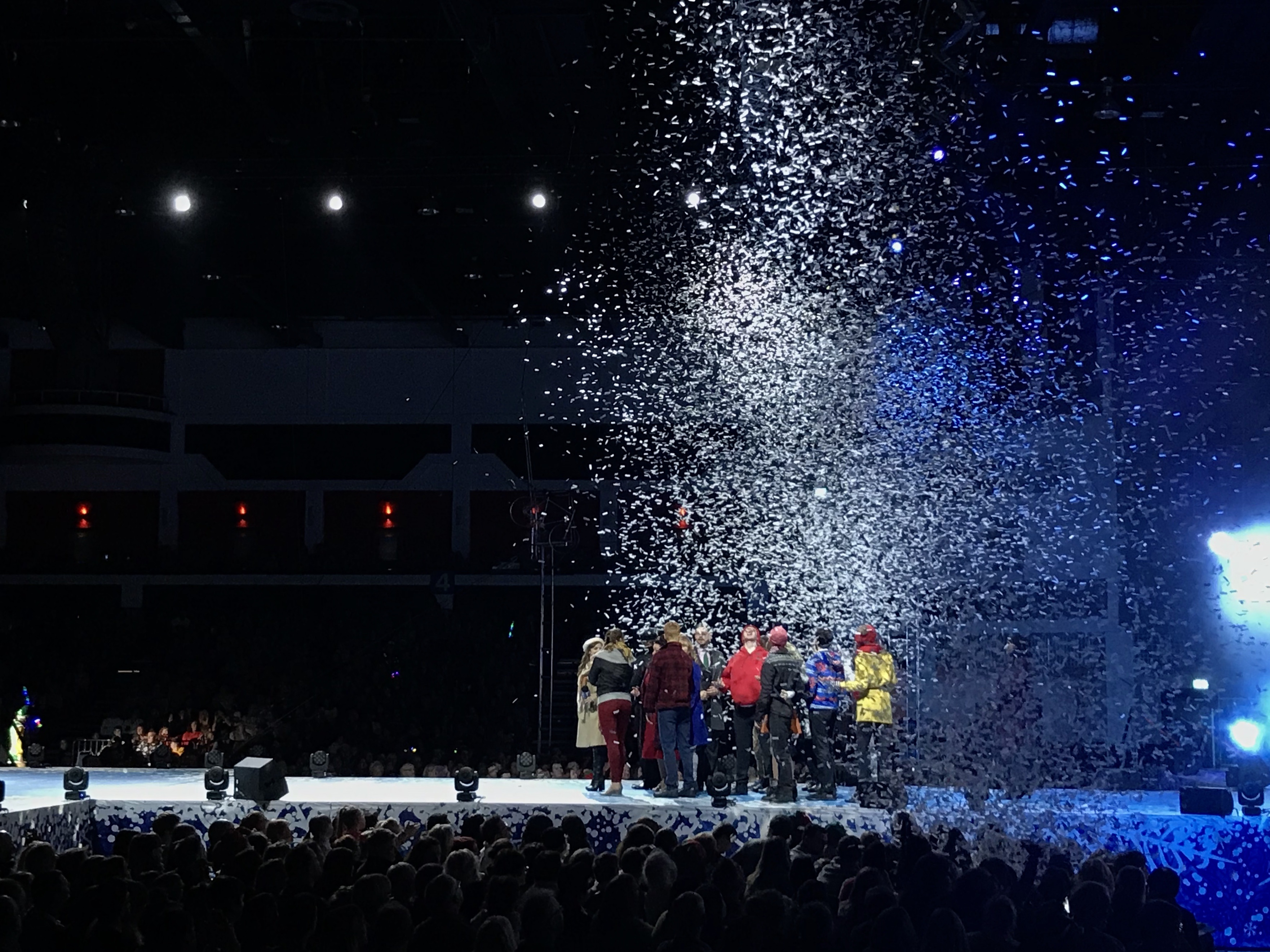 Pop legend David Essex plays Walter while Martine McCutcheon is truly delightful as Jovie, the cynical department store elf who is warmed by the spirit of Christmas. Her rendition of Never Fall in Love With an Elf, in which she charts her disastrous relationship history, was beautifully sung and really showcased her vocals.

I loved Tam Ryan as Buddy. It’s such an iconic role to take on but he performs with so much energy and enthusiasm throughout that he more than makes the part his own. It’s a welcome return to Cardiff for Tam following an appearance last year in the New Theatre’s panto Snow White. 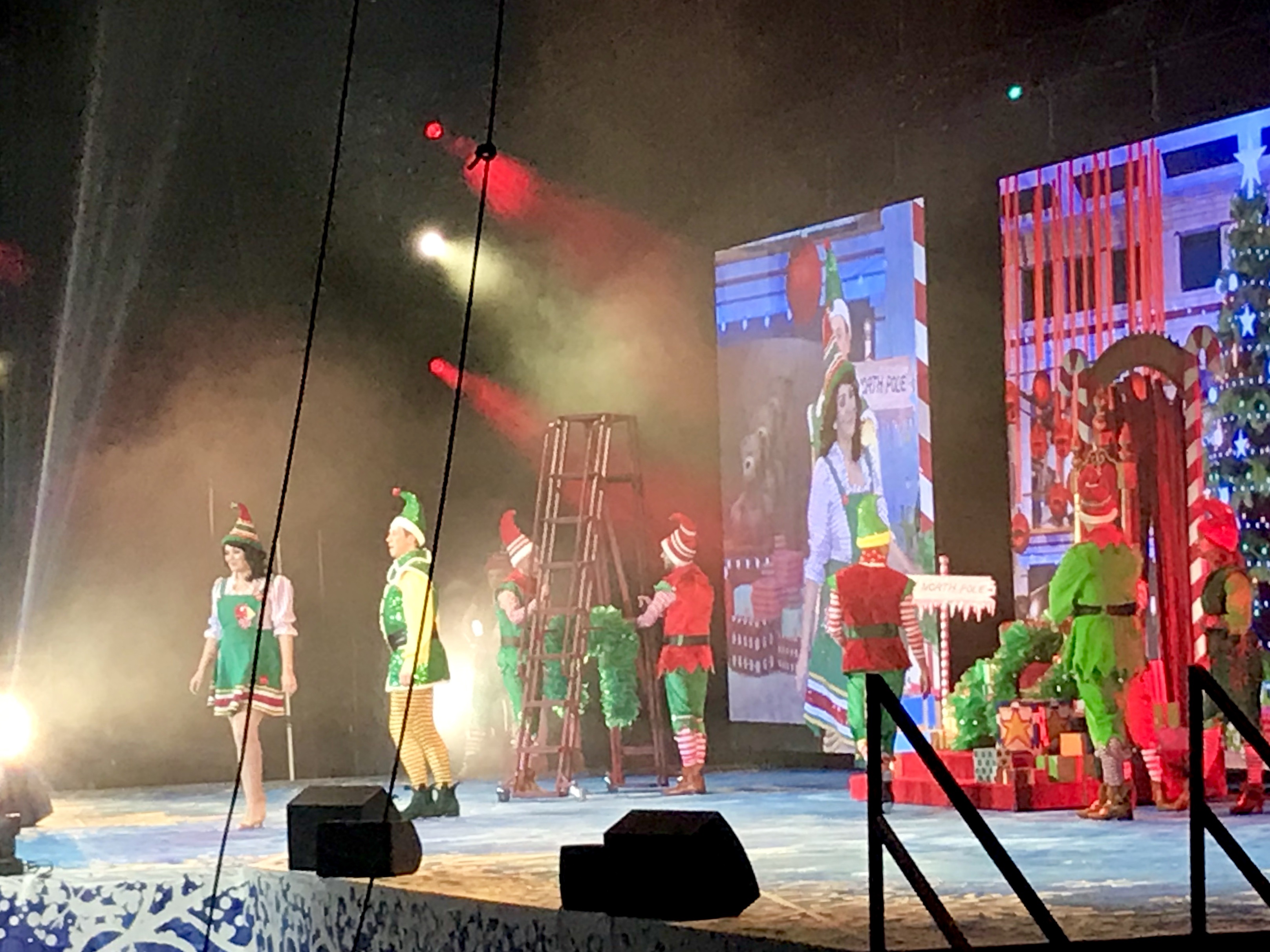 The 70-strong cast features a whole army of young elves in the form of children from the Cardiff branch of the Pauline Quirk Academy stage school. They take part in a few ensemble numbers, filling the stage with coordinated movements and vocals. What a wonderful opportunity for these local children. 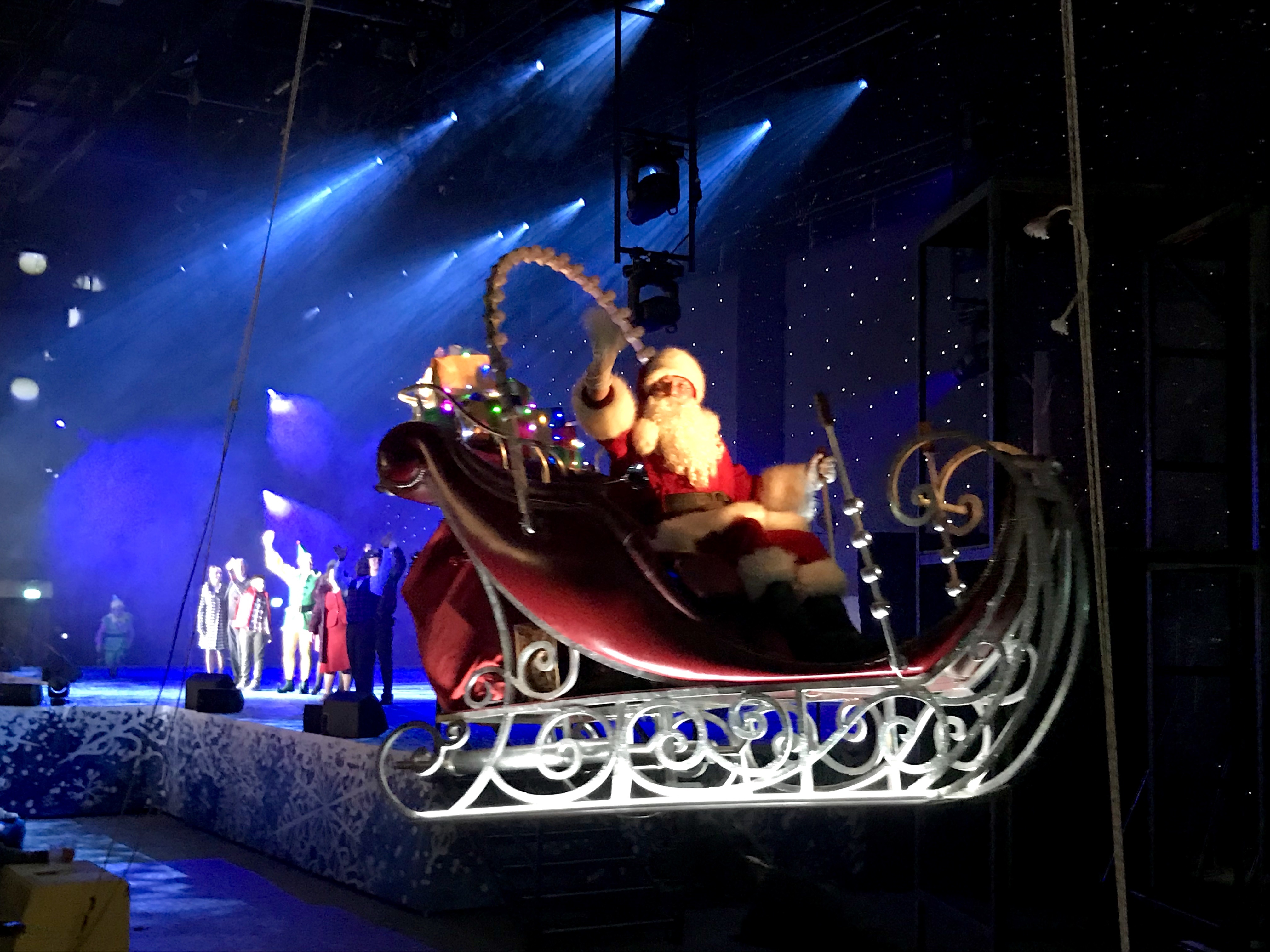 Despite the issues with props blocking the view, and the venue not quite working, Elf the Musical is still a wonderfully fun and festive production, perfect for the whole family. Full of memorable songs and passionate performances, my children loved it and it had me leaving the arena full of festive cheer.

Elf the Musical continues tomorrow at the Motorpoint Arena Cardiff with performances at 1pm and 5pm. It will then be at Genting Birmingham from 20-24 December and Motorpoint Nottingham from 28-30 December. See the website for details.