When news emerged last summer that a female Lord of the Flies film was being discussed in Hollywood, there was one meme that stuck in my mind.

It said that the savagery and brutally that occurs in William Golding’s classic text would never have happened if it had been a group of school girls, rather than school boys, that had found themselves sole survivors on a deserted island because the women would separate and live in their respective groups in harmony.

It was soon met with hundreds of comments that anyone who thought it wouldn’t happen with females had never met a bunch of teenage girls. Indeed, as someone who was once a teenage girl bullied by my peers, I know first-hand how vicious and tribal some of them can be. As another tweet jokingly pointed out, they already did a female Lord of the Flies remake and called it Mean Girls.

The show opened at Theatr Clwyd on 20 September to some great reviews. It’s now in Cardiff for a two-week run until Saturday 3 November and I was delighted to be invited to attend the press performance last Thursday.

A review of the female Lord of the Flies at the Sherman Theatre, Cardiff 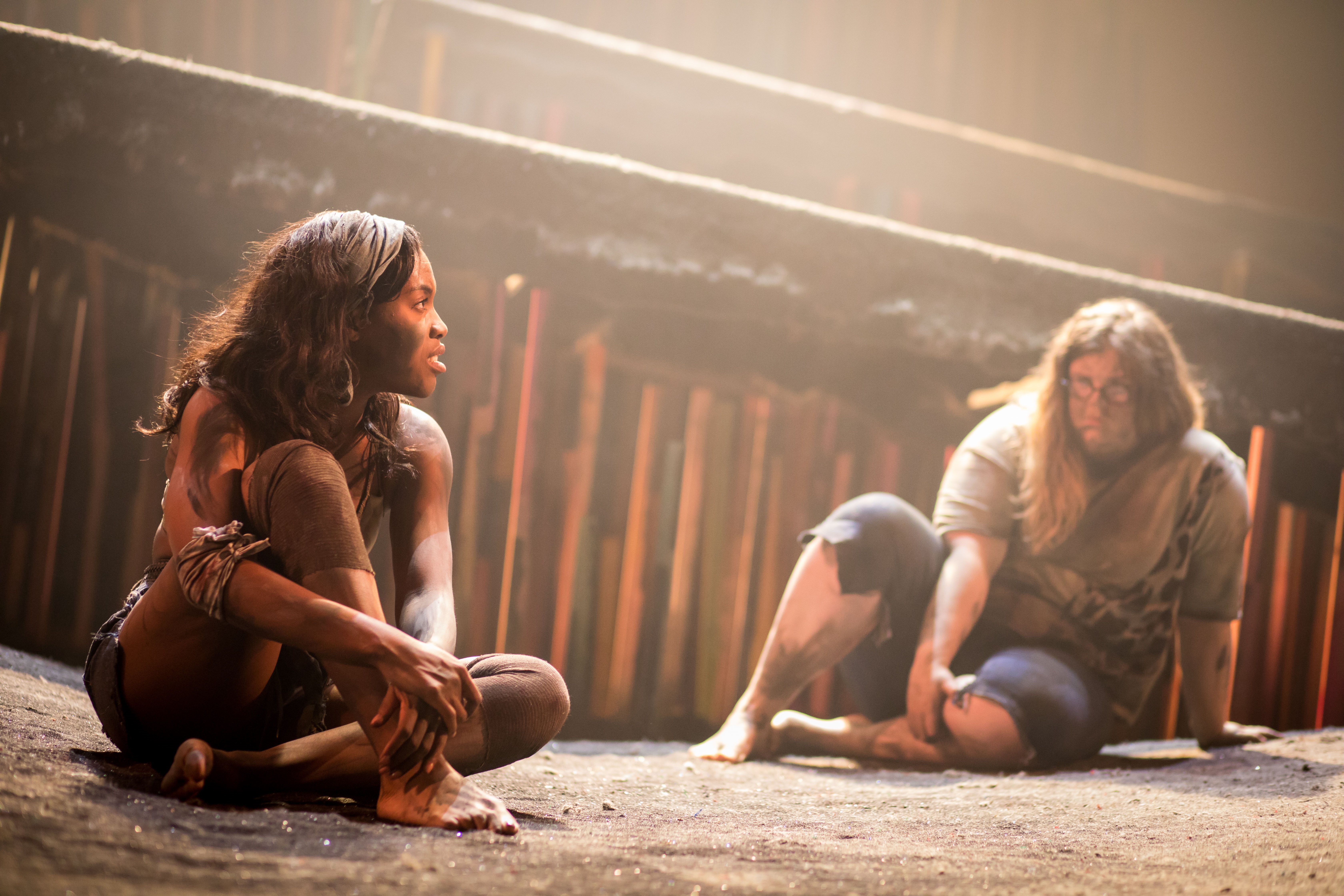 Clwyd Theatr and Sherman Theatre’s production of Lord of the Flies  is dark gritty tense and edgy. I could feel my heart in my mouth and adrenaline running around my body throughout. Parts made me jump out of my seat. Parts made me want to cry. It’s uncomfortable and violent. And really makes you question human nature.

Of course much of this is down to Nigel Williams’ acclaimed 1995 stage adaptation and the superb storytelling in William Golding’s 1954 classic in which a group of boys (or in this case girls) find themselves sole survivors on a deserted island after the plane evacuating them from an unspecified war crashes. While some characters try to instil a sense of order and democratic governance, others descend into power struggles and a primitive form of savagery, with devastating consequences.

But a lot of it is down to the atmospheric lighting and sound effects from Tim Mascall and Philip Stewart respectively and the stark multi-tiered staging from James Perkins; not to mention director Emma Jordan’s sensitive interpretation of the script.

And then there are the 10 young females in the lead roles. Interestingly the character names remain the same as the boys in the book although they are referred to in the female form. A subtle reminder of the brutality of inherent human nature within all of us, perhaps? 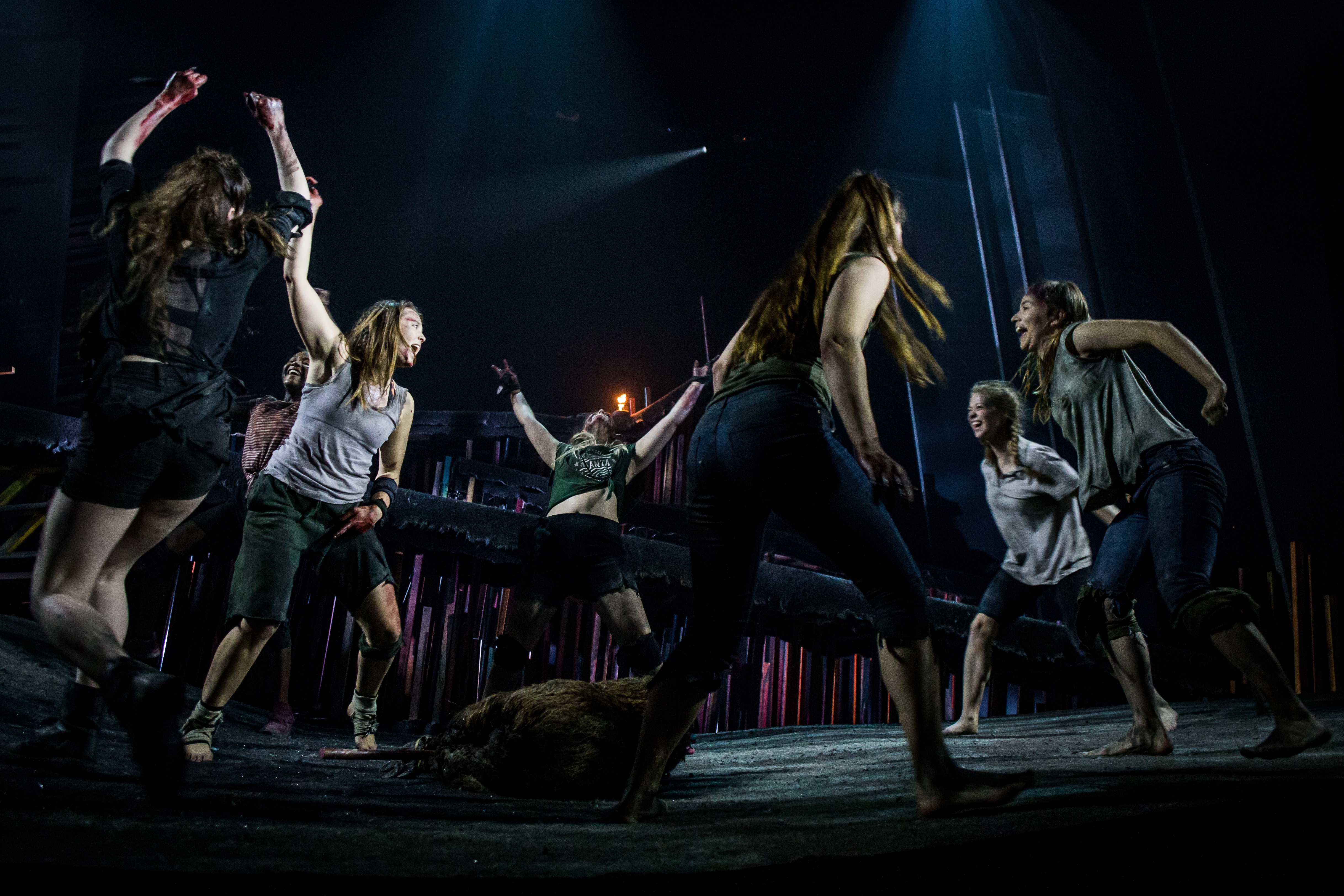 Lola Adaja – making her professional stage debuts with this production – plays Ralph, the child chosen as leader of the gang but who governs sometimes reluctantly, unsure of whether to join the savages or not. She soon realises the consequences of taking the wrong path and not having faith in herself.

Kate Lamb plays Jack, the choir prefect who is not happy about Ralph’s governance and who reigns over her band of hunters with savagery and terror… although there are the occasional flickers of doubt in her face as to whether her path is the right one.

Hannah Boyce as Roger was one of the stand-out performances for me. She becomes Ralph’s right-hand woman and encourages the savagery and bullying of Piggie. Her mannerisms and facial expressions are so eerie and demonic in parts that there’s always a menacing and frightening undertone to what she’s saying.

I found Gina Fillingham as Piggy – the overweight, bespectacled girl tormented by Jack and her gang – incredibly endearing (more so than I remembered from the book). She desperately tries to hang on to order and democracy and doing the right thing.

Leah Walker as Maurice; Lowri Hamer as Perceval; Lowri and Mari Izzard as Sam and Eric; Olivia Marcus as Simon and Laura Singleton as Henry make up the rest of the school girls; while Matthew Bulgo plays the naval officer who eventually rescues the group. 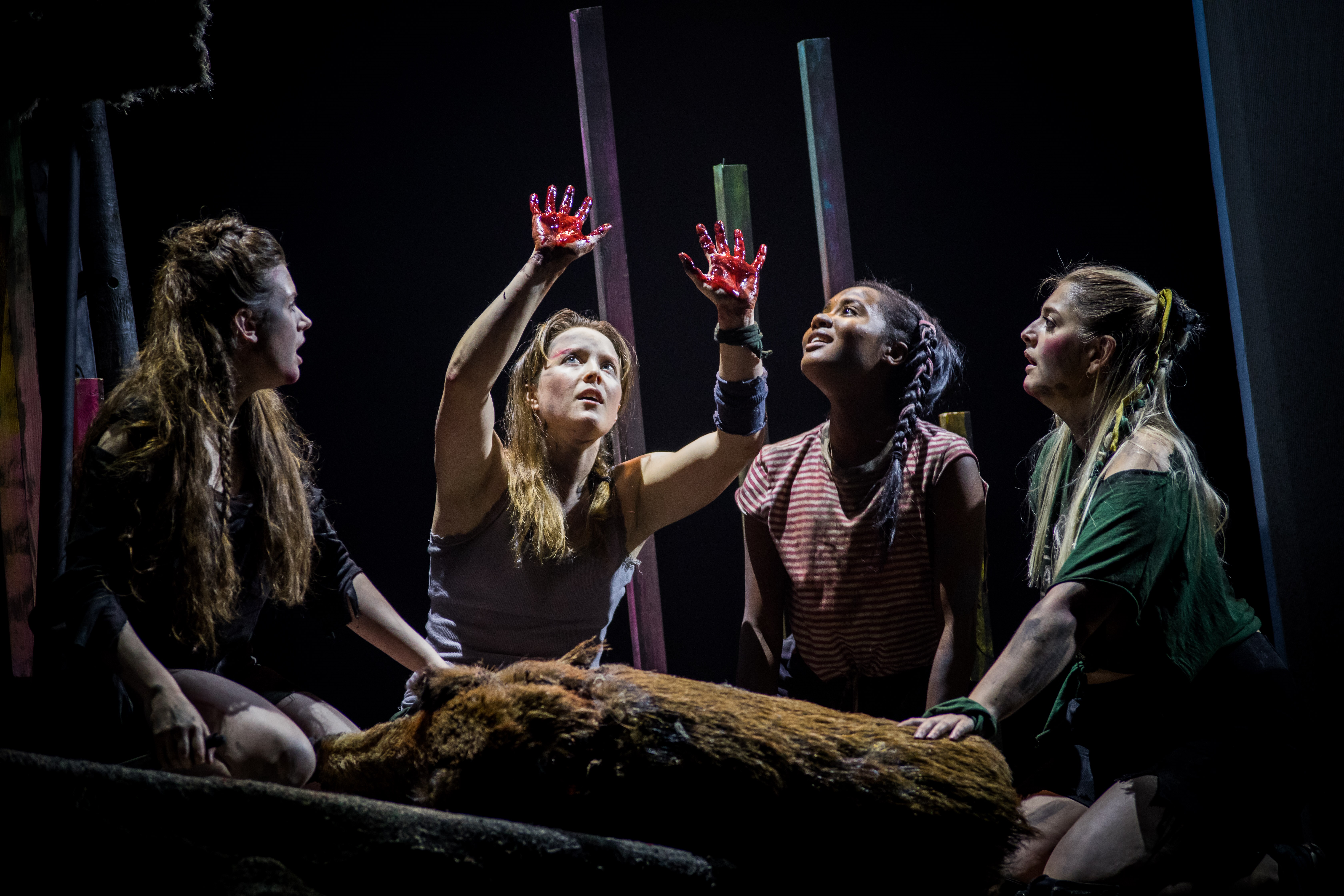 Under the guidance of movement director Liz Ranken, the choreography of the characters as they become more savage and tribal is so powerful. The scene where the hunters have enveloped Ralph into their fold and are vying for a kill and chanting and dancing for blood is intensely dramatic and uncomfortable, even before its devastating climax.

Most performances I review on Cardiff Mummy Says I attend with my children. However this one comes with an age guidance of approximately 14 and having watched the show my children are definitely too young. There were a group of school pupils aged around 11-12 in attendance on press night; they seemed to handle the content well but I can imagine for more sensitive children it would be distressing in parts. 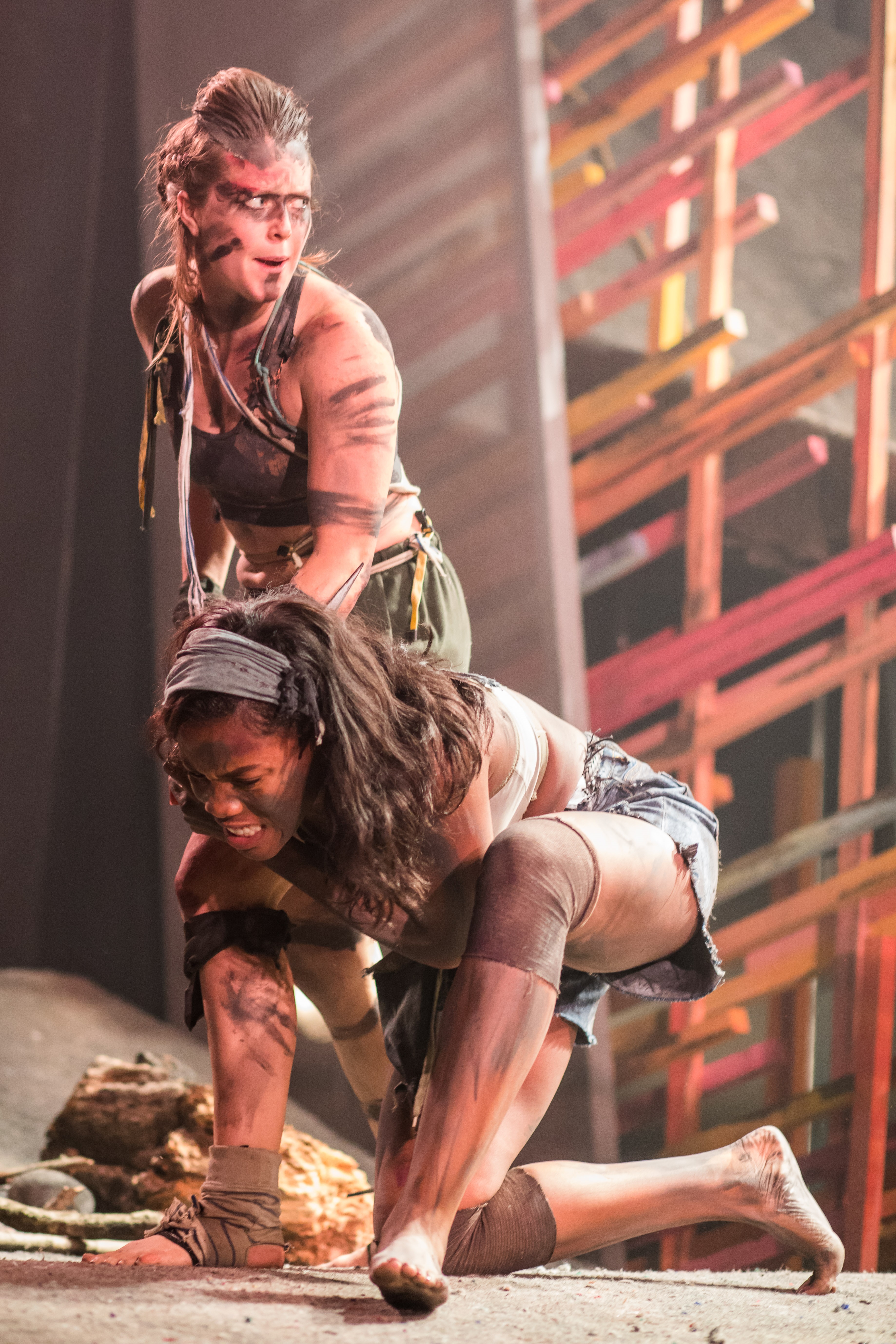 The classic text is often studied in schools although it’s not one that I personally had to read. Although I was aware of the book and its themes, I didn’t read it myself until my early 20s. It was good to watch it without the weight of the memory of exam syllabuses and essays… although as soon as I got home, I spent more than an hour googling its various themes and symbolism because I had so many questions I wanted to explore.

And surely that’s as good a recommendation as you need? Clwyd Theatr and Sherman Theatre’s Lord of the Flies is Tense, atmospheric and so incredibly thought-provoking I couldn’t stop thinking about it.

Lord of the Flies is at the Sherman Theatre until Saturday 3 November. Book online here.

Have you seen the show? I’d love to know what you think in the comments below, on the Cardiff Mummy Says Facebook page or you can tweet me on @cardiffmummy