St Fagans National Museum of History in Cardiff has always been one of my favourite places to visit (even before I took on a role as family blogger ambassador for them).

The open air museum really brings history to life with more than 50 buildings including farm houses, miners’ cottages, shops, a chapel, a mill and a school. The majority of the buildings have been carefully deconstructed from their original locations across Wales and then reconstructed on the museum’s site and furnished as they would have been during their heyday. Being able to walk around the buildings and see how things would have looked instantly conjures up what life was like in years gone by.

As a child, I remember a school trip where we had a lesson in the school dressed as Victorian children. I also remember family visits, marvelling in particular at the row of Rhyd y Car miners’ cottages, and enjoying their traditional Welsh Christmas events.

We visit regularly as a family as I’m keen for my children to develop an understanding of history and what life was like in Wales in the past. It’s also free to visit, which is always helpful when you’re on a budget. (Other than parking charges of £5 a day or £25 for an annual season ticket – and any donations you wish to make to support the museum’s work).

And now one of our favourite places to visit has even more to offer with the official launch this weekend of its £30 million redevelopment and unveiling of several new attractions for visitors. 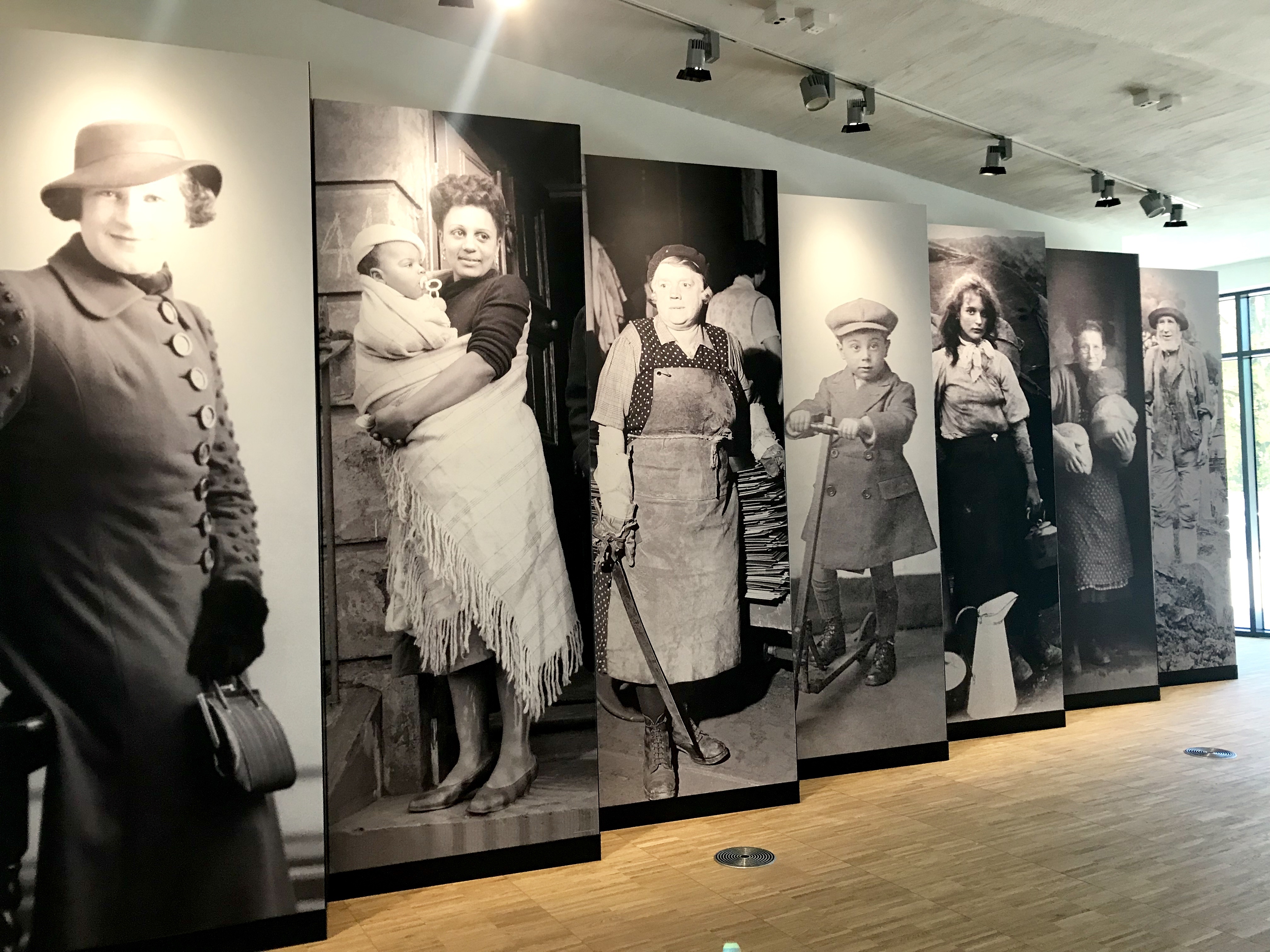 I was lucky to be invited along yesterday for an advance preview of the changes; a sneak preview of the results of six years of hard work from not just from the museum’s staff but also 120 community organisations and 3,000 volunteers.

Some of the new elements of the site’s biggest ever redevelopment – such as the new entrance building, the Iron Age round houses, and the playground – have been open to the public for several months now.

But this weekend sees the culmination of the project with the opening of three new galleries, and a new historical building Llys Llewelyn, a medieval prince’s court based on archaeological excavations of from Llys Rhosyr on Anglesey.

St Fagans are celebrating the completion of their redevelopment with a free weekend of events this Saturday and Sunday. You can read the full details here.

Visitors this weekend can meet staff and volunteers who worked on the project. DJ Bethan Elfyn will be curating music as part of the Horizons project, a Launchpad for new Welsh music. Cardiff-based performance school ABC and the museum choir will be performing; and there will be evening performances of Atgyfodi – a world premiere installation and music performance piece by Welsh composer John Rea. There’s also a chance to stitch the Culhwch ac Olwen wallhanging with artist Cefyn Burgess in Llys Llywelyn

The St Fagans redevelopment project was made possible thanks to generous support from the National Lottery through the Heritage Lottery Fund, the Welsh Government and other supporters.

Chair of the Heritage Lottery Fund, Sir Peter Luff, said: “The redevelopment of St Fagans has been made possible thanks to National Lottery players. In total, those players have raised nearly £400 million to support over 2,600  Welsh heritage projects – large and small – but this is the biggest of them.

In addition to funding from the Museum and private donations, £7m was awarded from the Welsh Government, to aid the transformation. 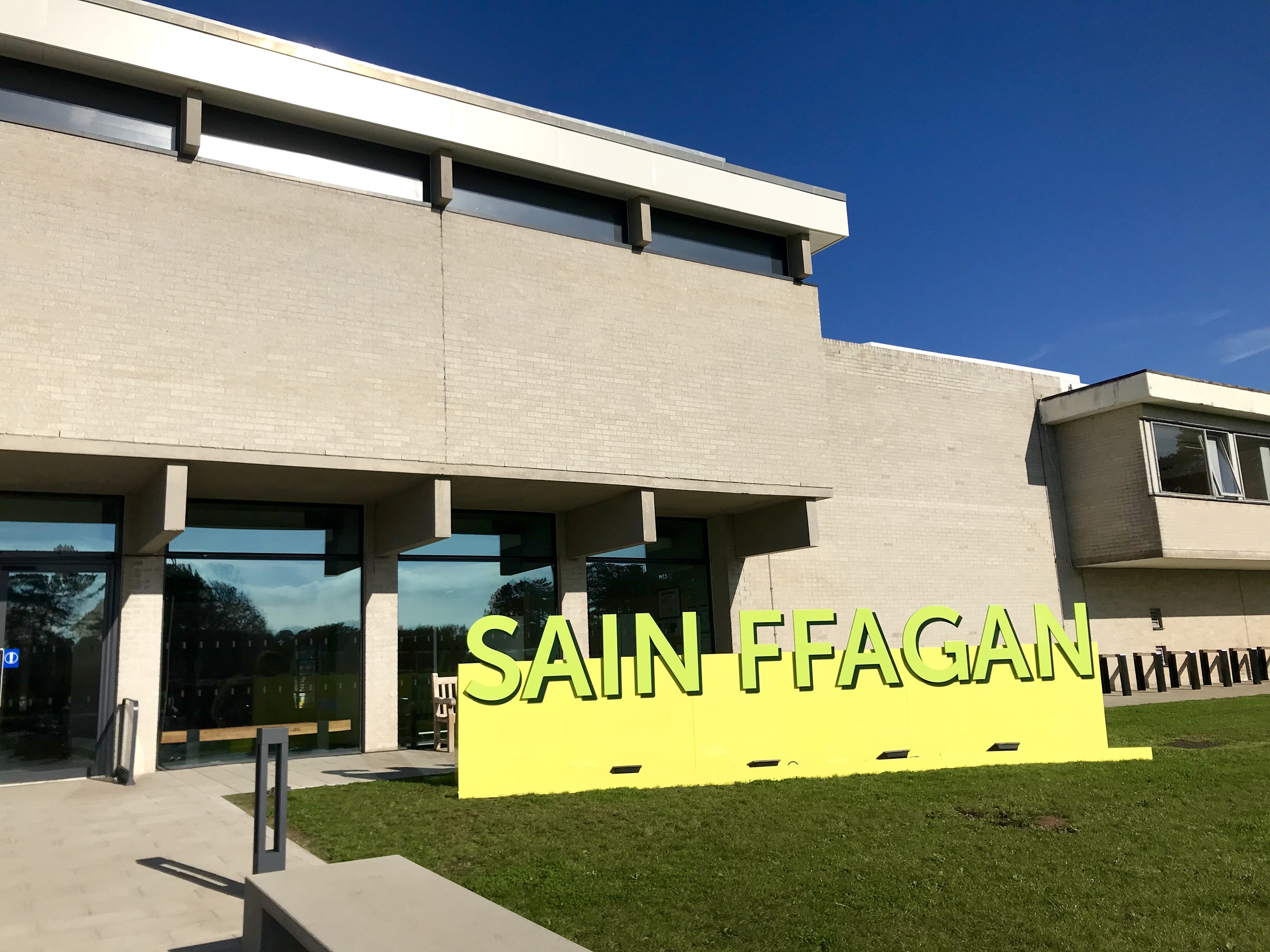 This stunning building opened last year and includes a new covered courtyard, new restaurant and improved visitor facilities. We’ve already taken part in family arts and crafts sessions in the building’s beautiful new learning suites. In fact the Weston Centre for Learning has already welcomed more than 60,000 pupils and students since it opened in September 2017. Amgueddfa Cymru (National Museum Wales incorporating the seven different museum sites across Wales) is the largest provider in Wales of learning outside the classroom. 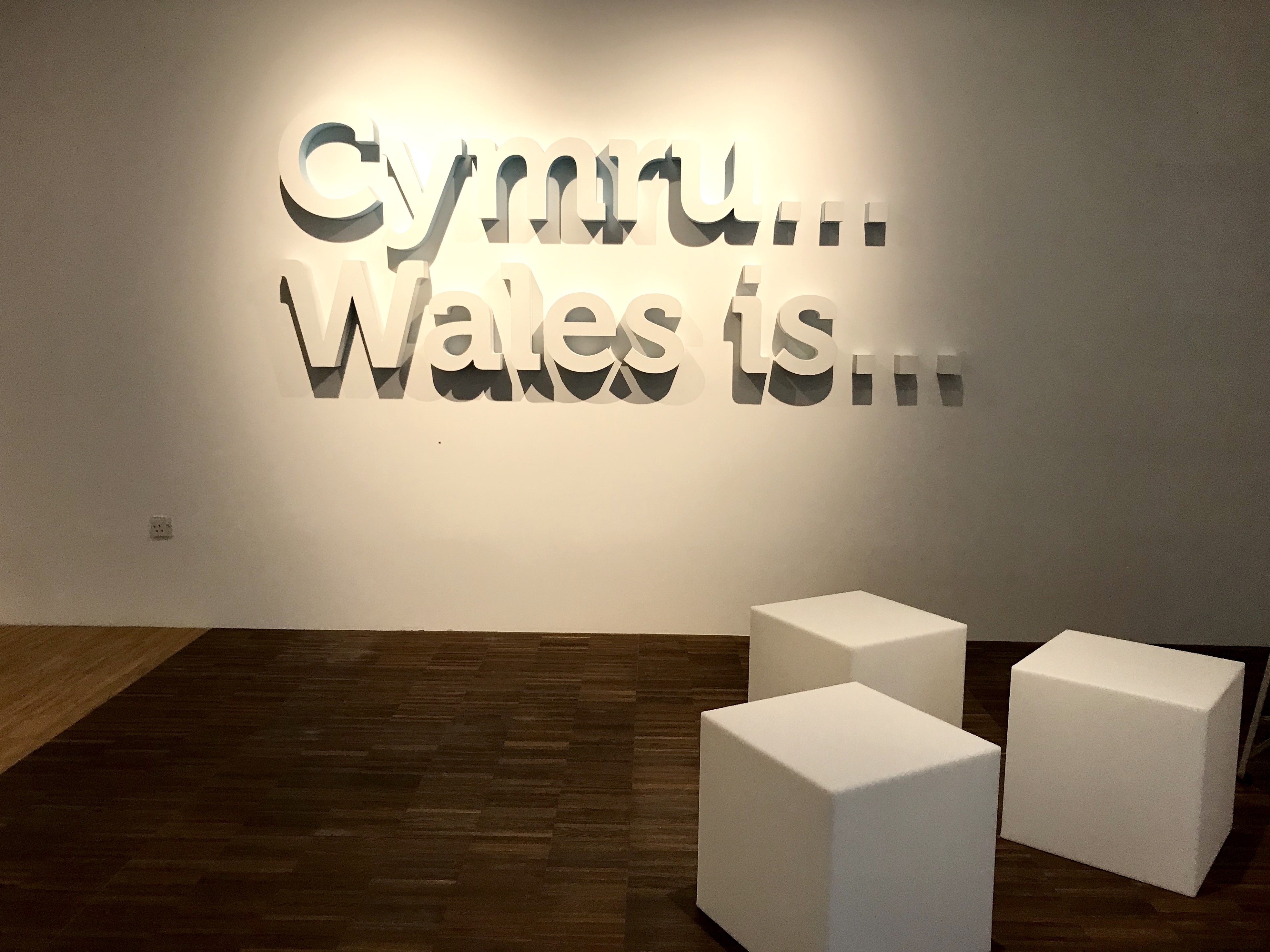 This is a hands-on, interactive and visual depiction of 230,000 years of human life in Wales as shown through 300 objects and 16 changing stories. Personal highlights for me included a life-size model of a Neanderthal child, based on the remains of a boy who was found in Pontnewydd Cave in north Wales; the remains of a boy and man found on Anglesey and who died in the 900s; and several ancient swords. 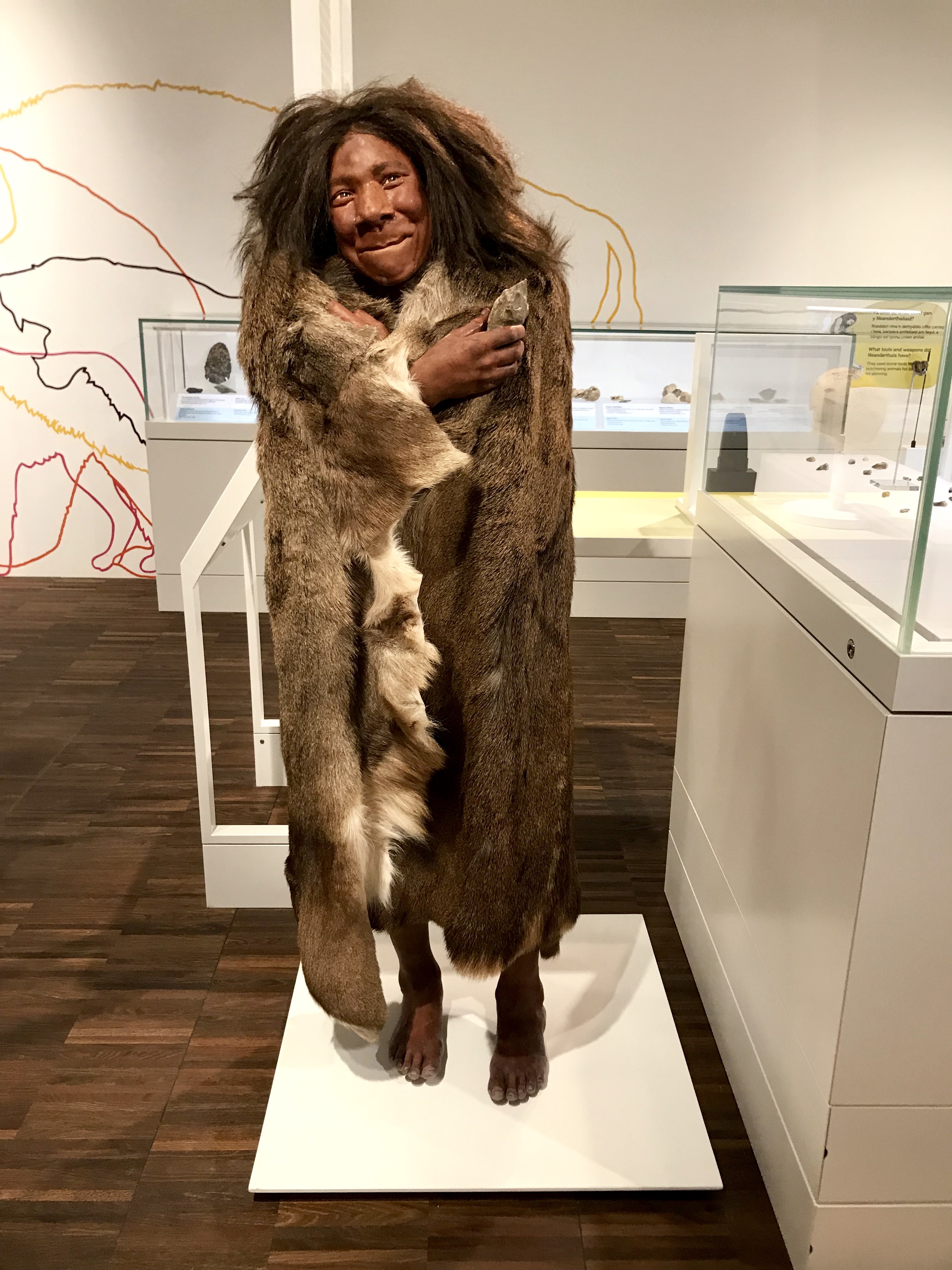 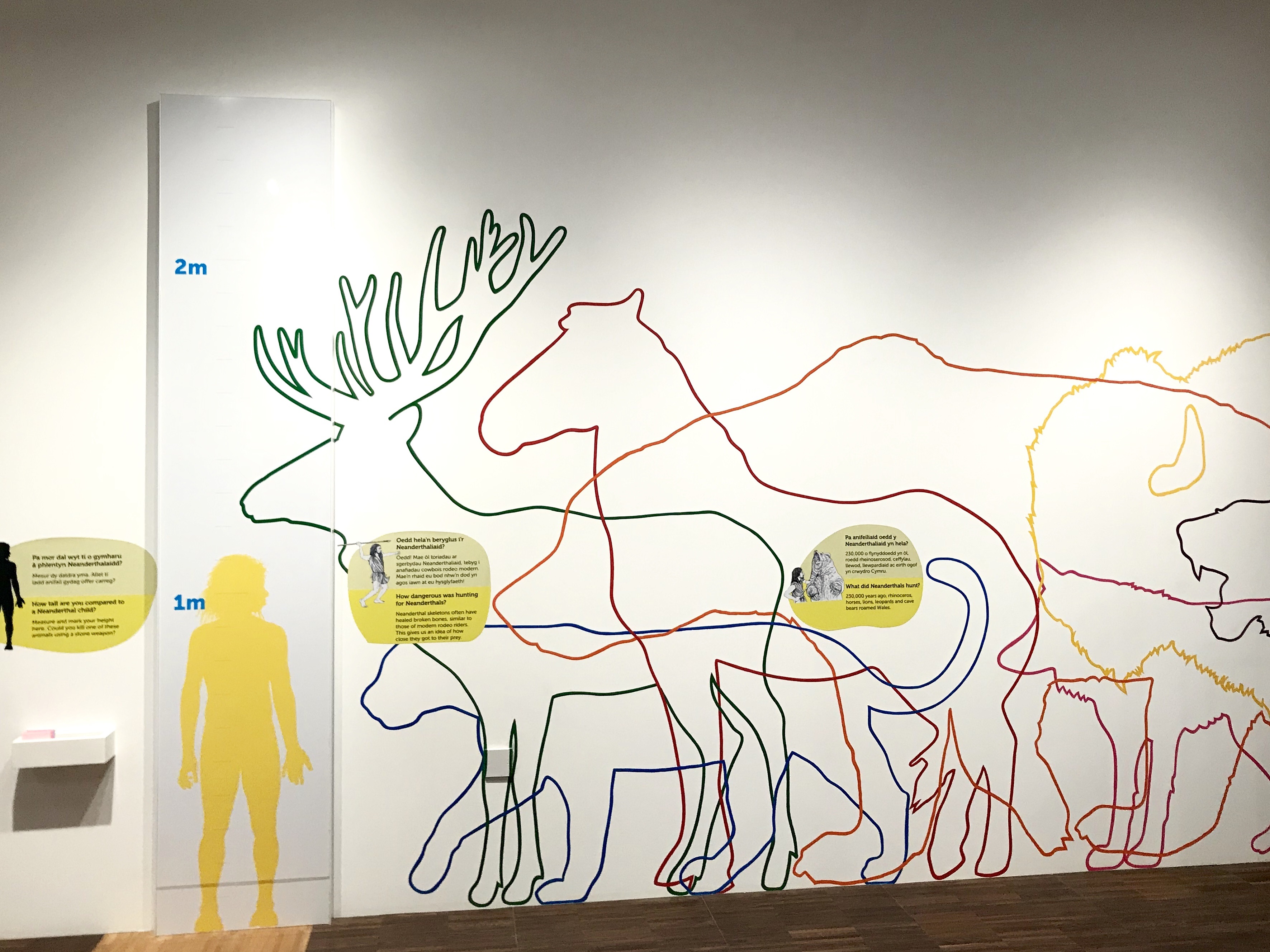 Historical artefacts help visitors find out more about Welsh suffragettes; the Welsh village of Tryweryn which was turned into a reservoir; plus there’s a beautiful blue and gold embroidered dress once belonging to Lady Rachel Morgan the family who once owned Tredegar House in Newport. 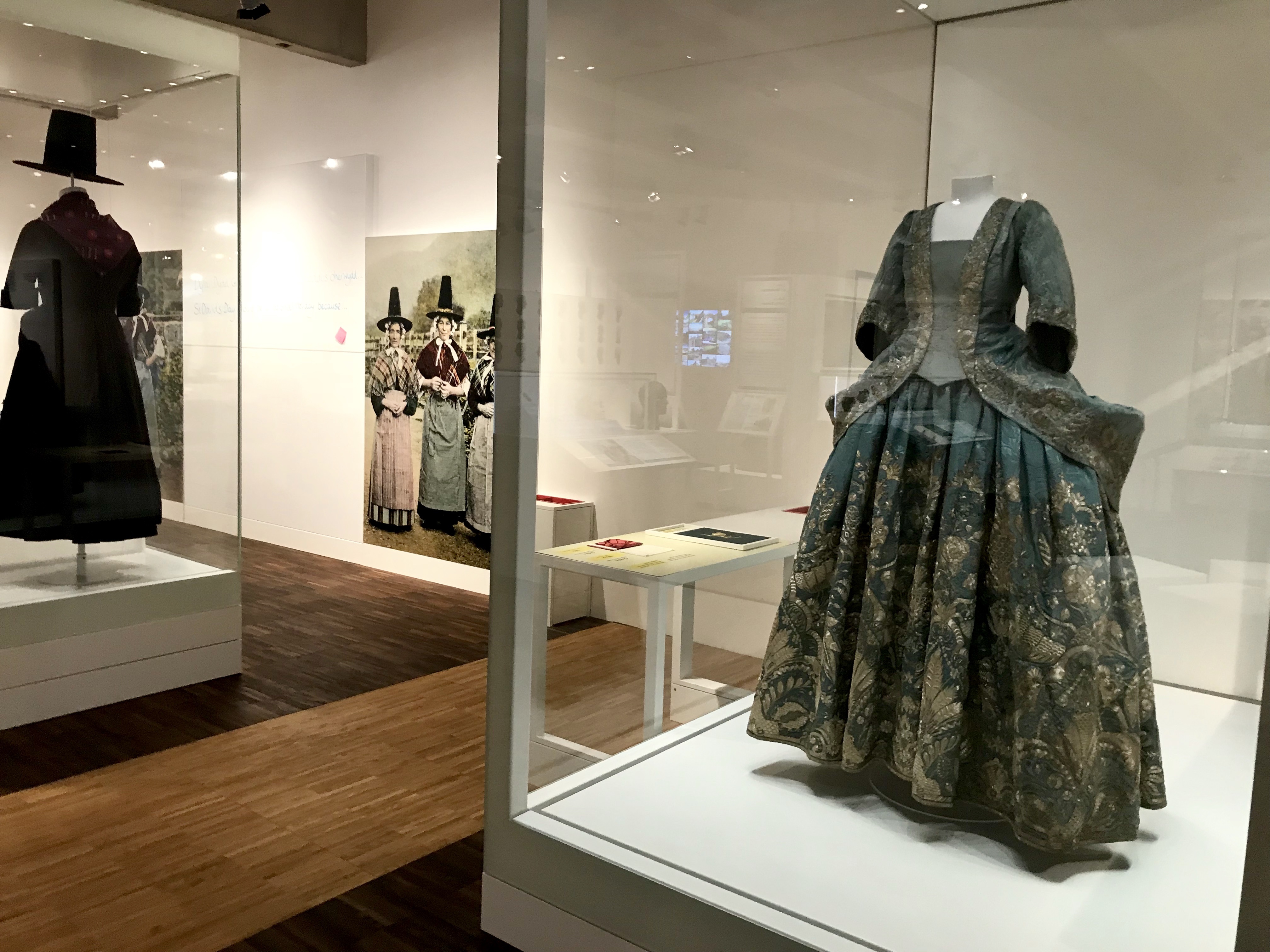 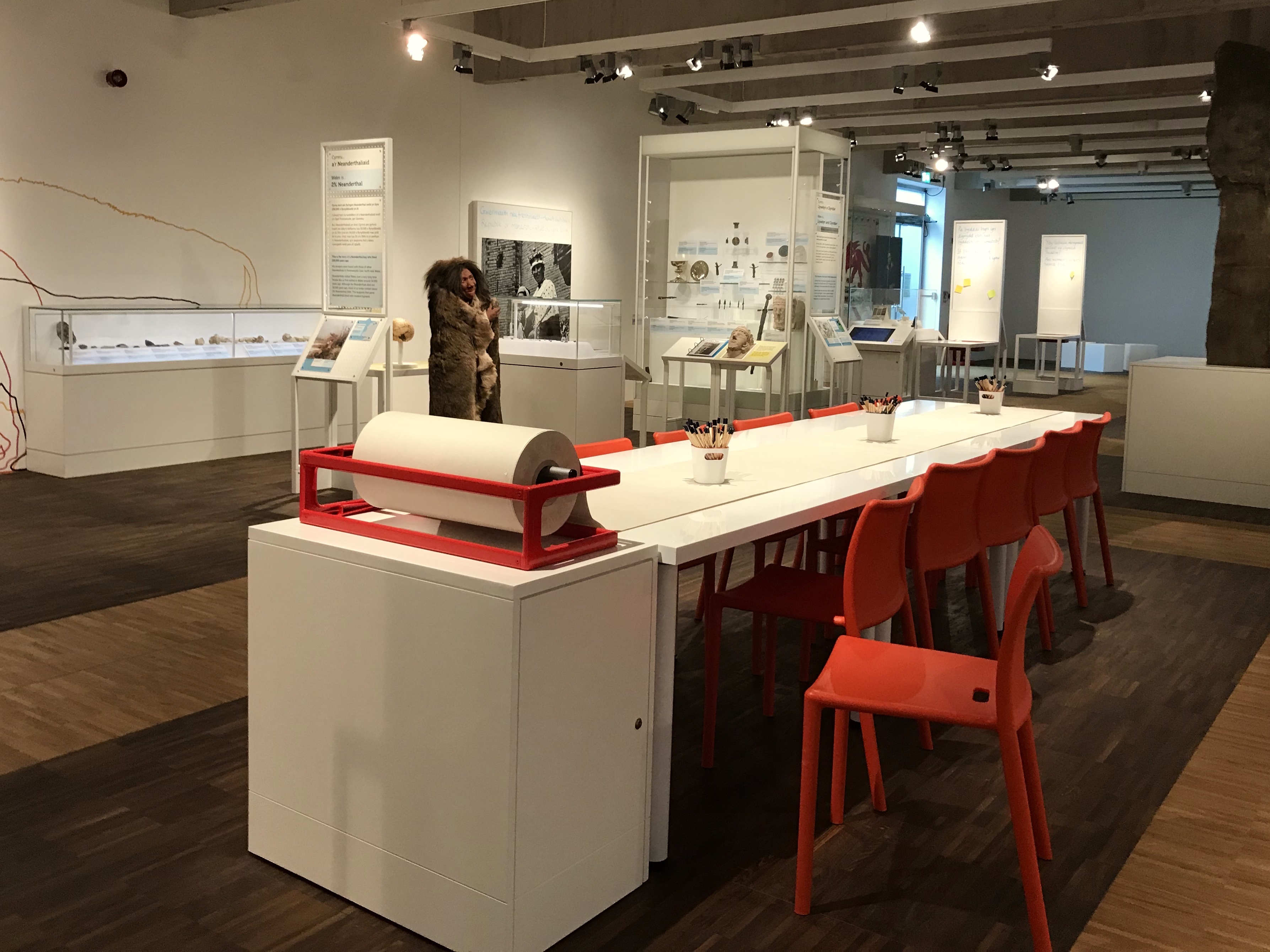 The gallery is so light and spacious with plenty of colourful and intriguing displays to attract attention. But there are also lots of hands-on exhibits too, which is especially great for children. In the centre of the gallery, there’s a paper-lined table where children can draw and visitors can give their opinions on such issues as Welsh independence and Brexit.

This is a wonderful exploration of everyday life in Wales – how people dressed, prepared food, worked, played and mourned. The gallery is great for families as there’s so much for children to do. They can sit on an old tractor; play traditional games such as hop scotch; try on replica period clothing; as well as read stories in a little bed. 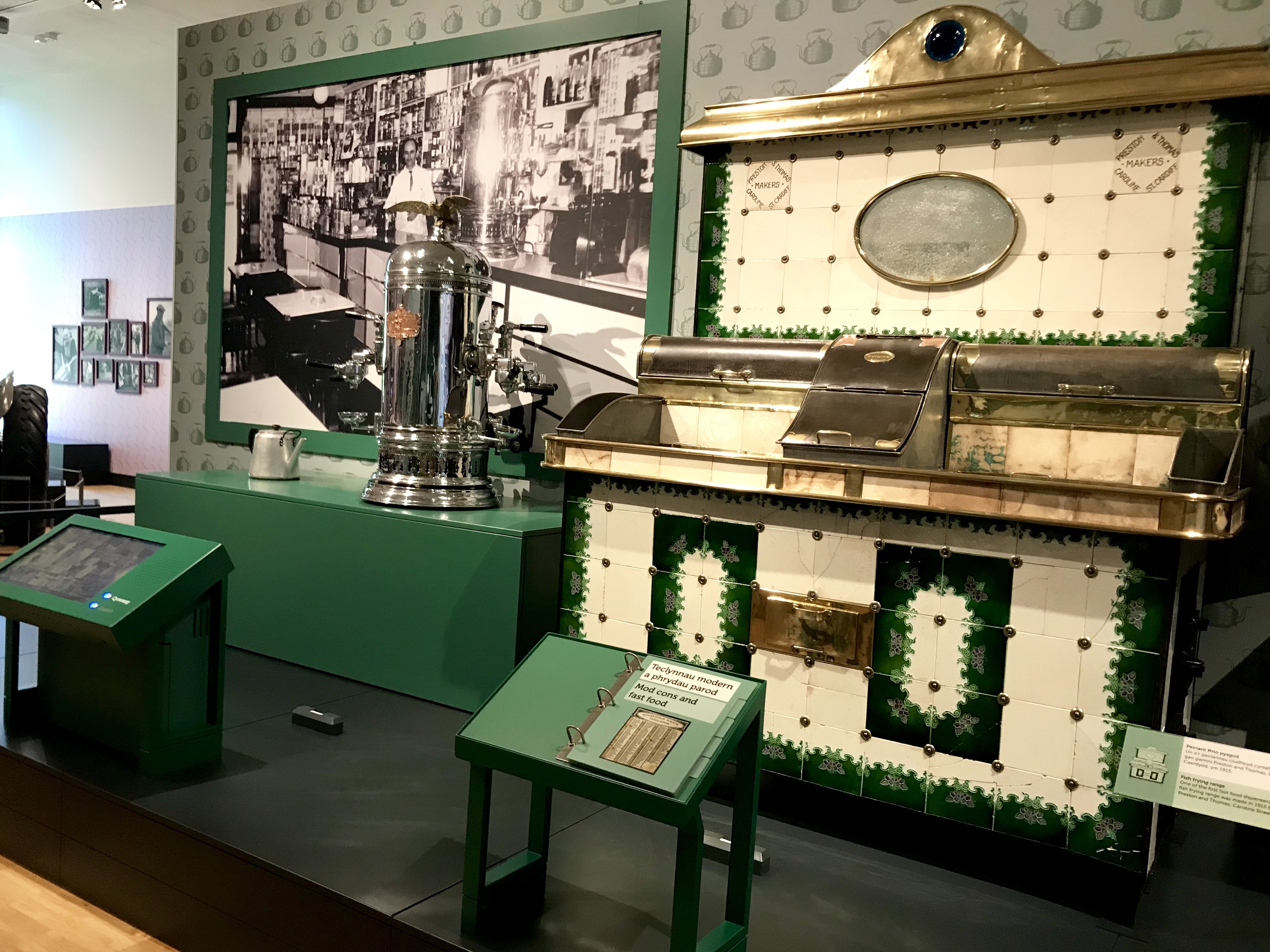 Highlights on display include a green and white tiled fish frying range – one of the first fast food dispensers which was made in 1915 by Preston and Thomas on Caroline Street in Cardiff, now known locally as Chippy Lane. It sits alongside a coffee machine brought to Wales from Italy in 1921 by the Rabaiotti brothers and used at their café in Port Talbot. 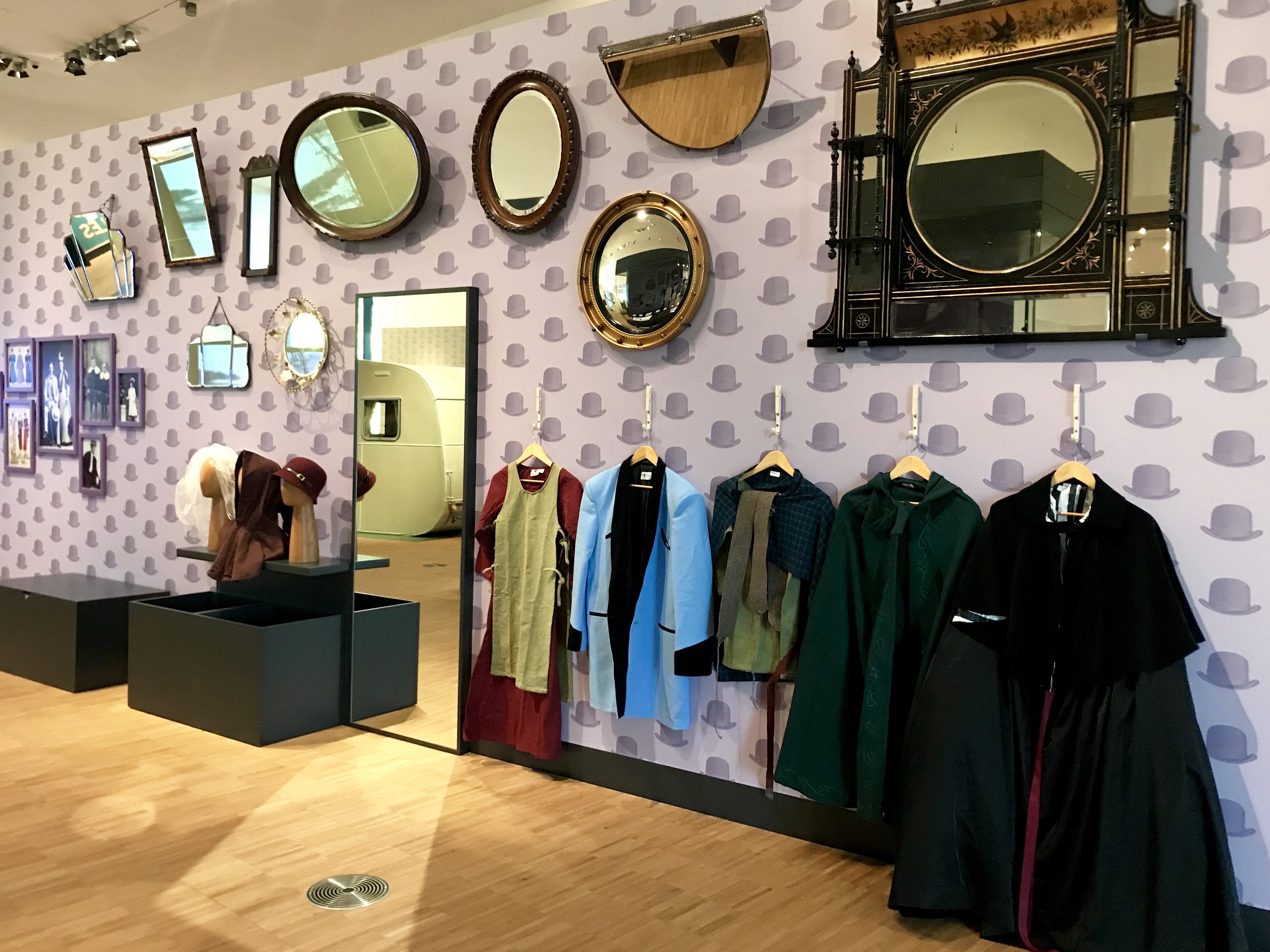 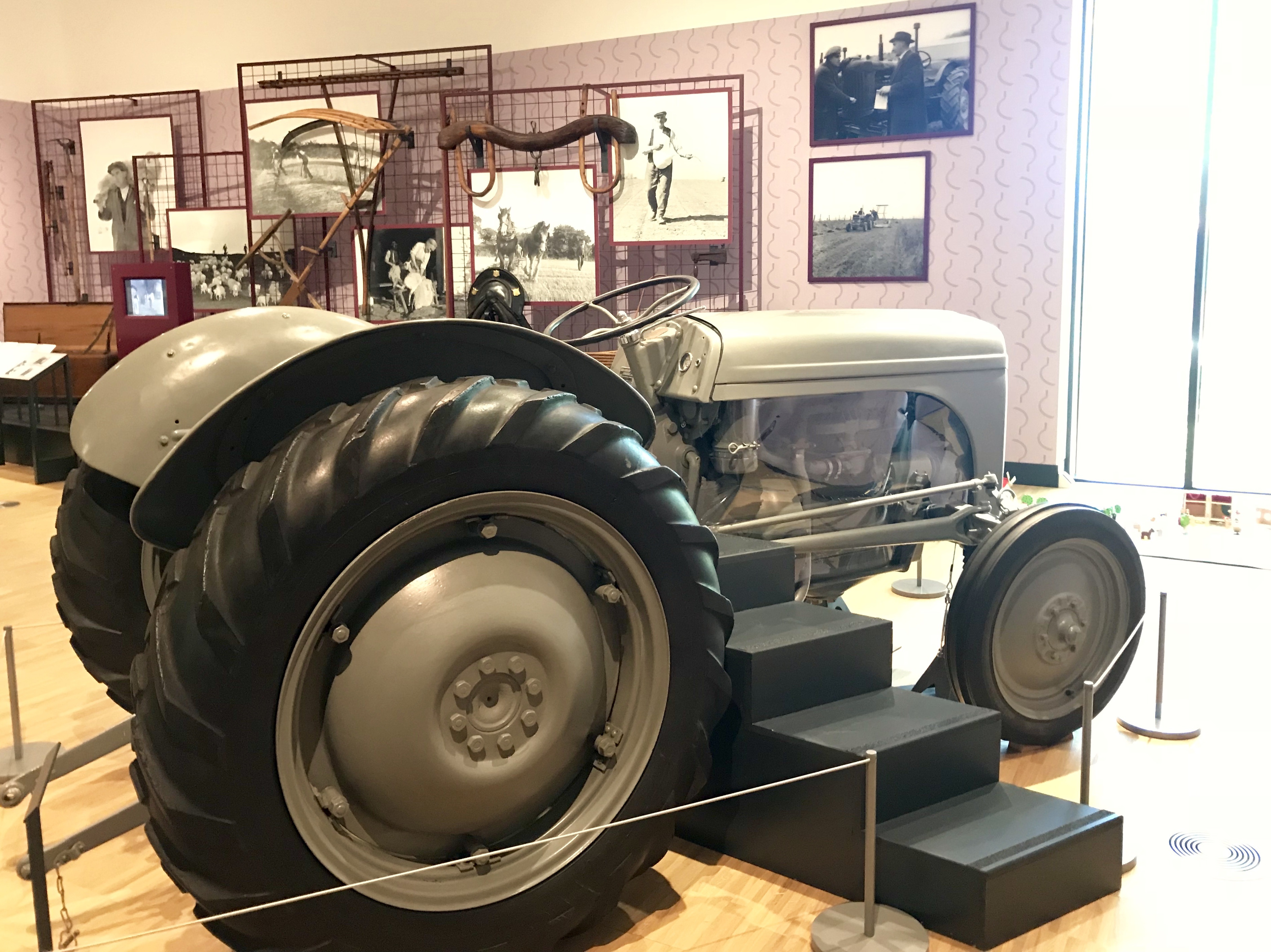 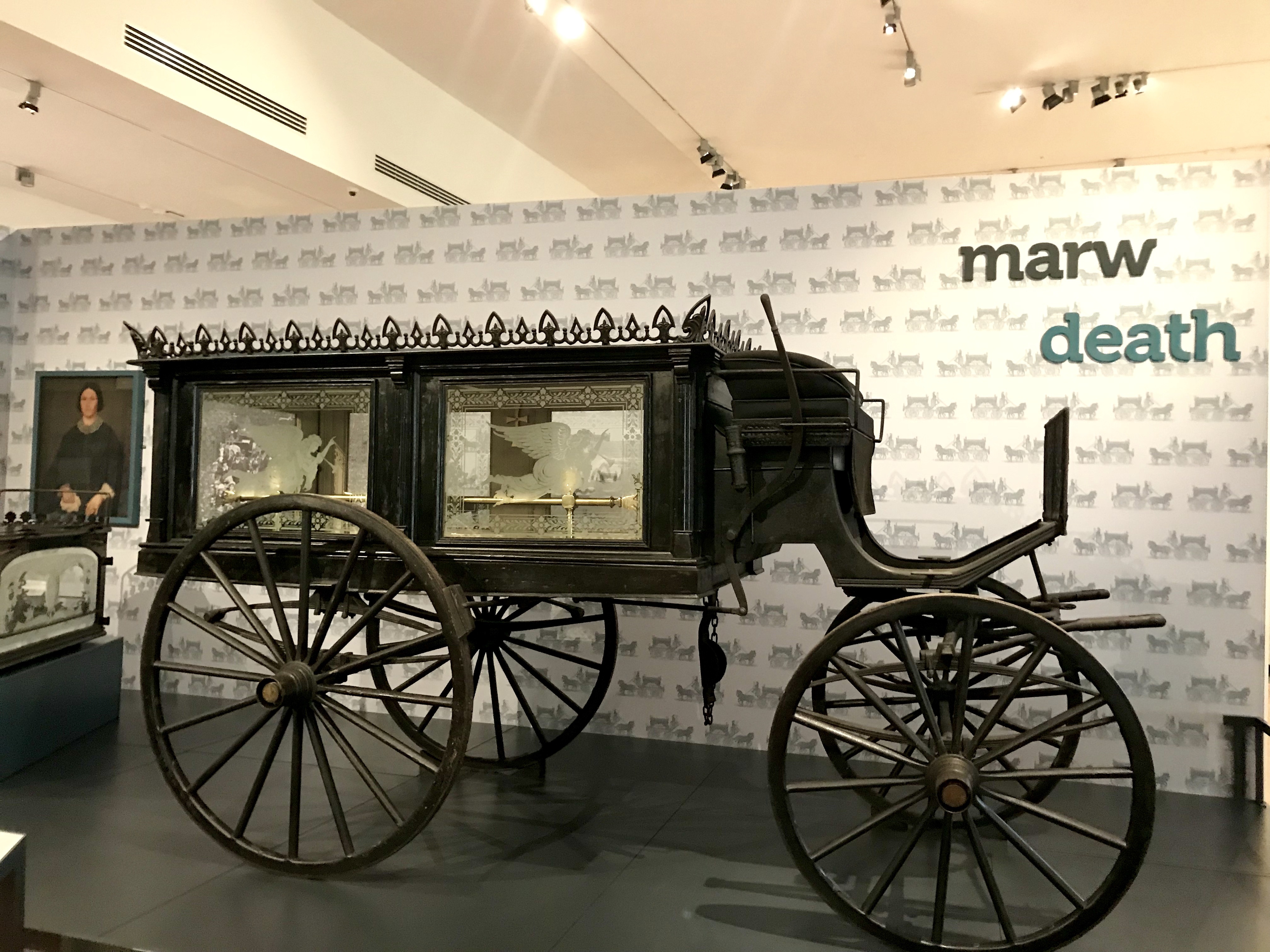 There’s also a pale green caravan from the 1950s in which the Dodds family of Cardiff enjoyed decades of family holidays. Home videos of their trips are projected onto the side.

You can watch clips from Welsh rugby internationals while sat on chairs from the old Arms Park. In the section on death and mourning there’s an ornate horse-drawn carriage which was used in Mid Wales until 1910. 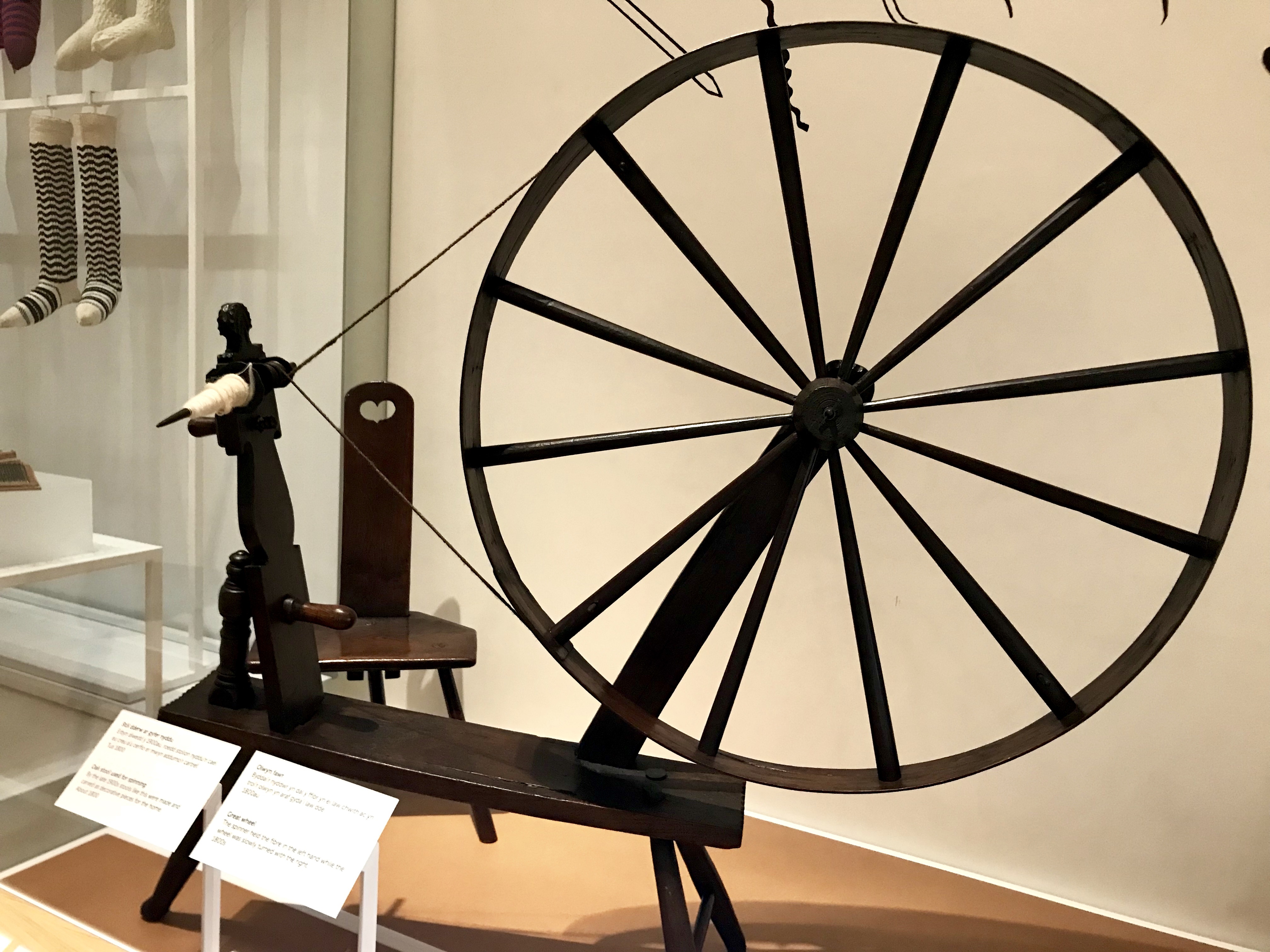 A short walk into the main grounds is Gweithdy which comes from the Welsh word for workshop and celebrates the skills of generations of makers with sections on clay; stone; metal; wood; textiles; and plant-based materials. As well as artefacts and tools visitors can get hands-on with basket weaving and beech building blocks. 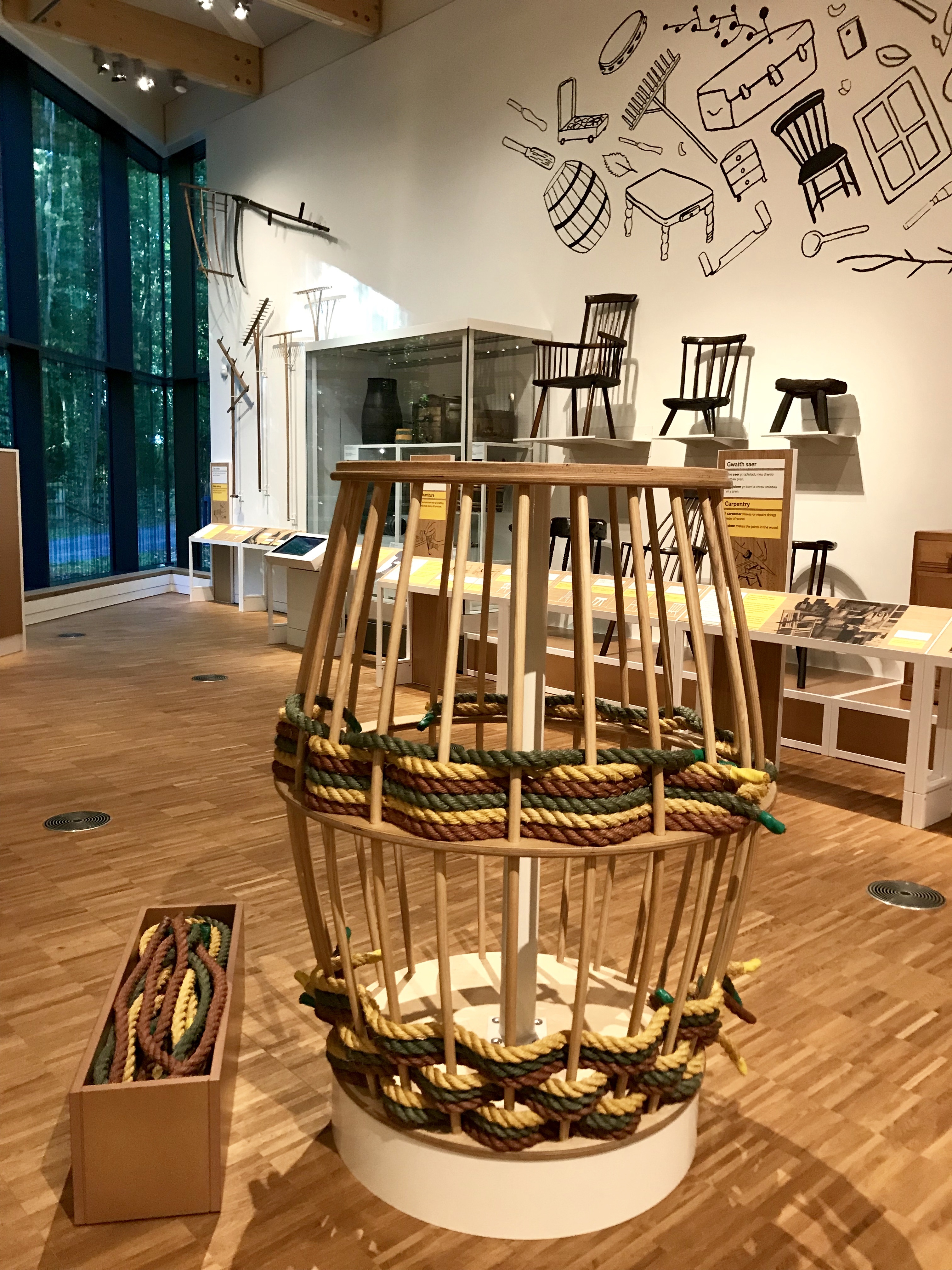 I loved the Sleeping Beauty style spinning wheel from the 1800s as well as an Iron Age Firedog which would have marked the central hearth of the Iron Age chief’s roundhouse. The well-preserved remains sit next to an intricate recreation of how it would have originally looked.

This building will be used for schools workshops as well as public courses such as blacksmith skills. The building has its own toilets and café.

One of the museum’s most popular buildings, Oakdale Workmen’s Institute, has been reinterpreted to provide a dementia-friendly exhibit and a space to support Welsh learners. 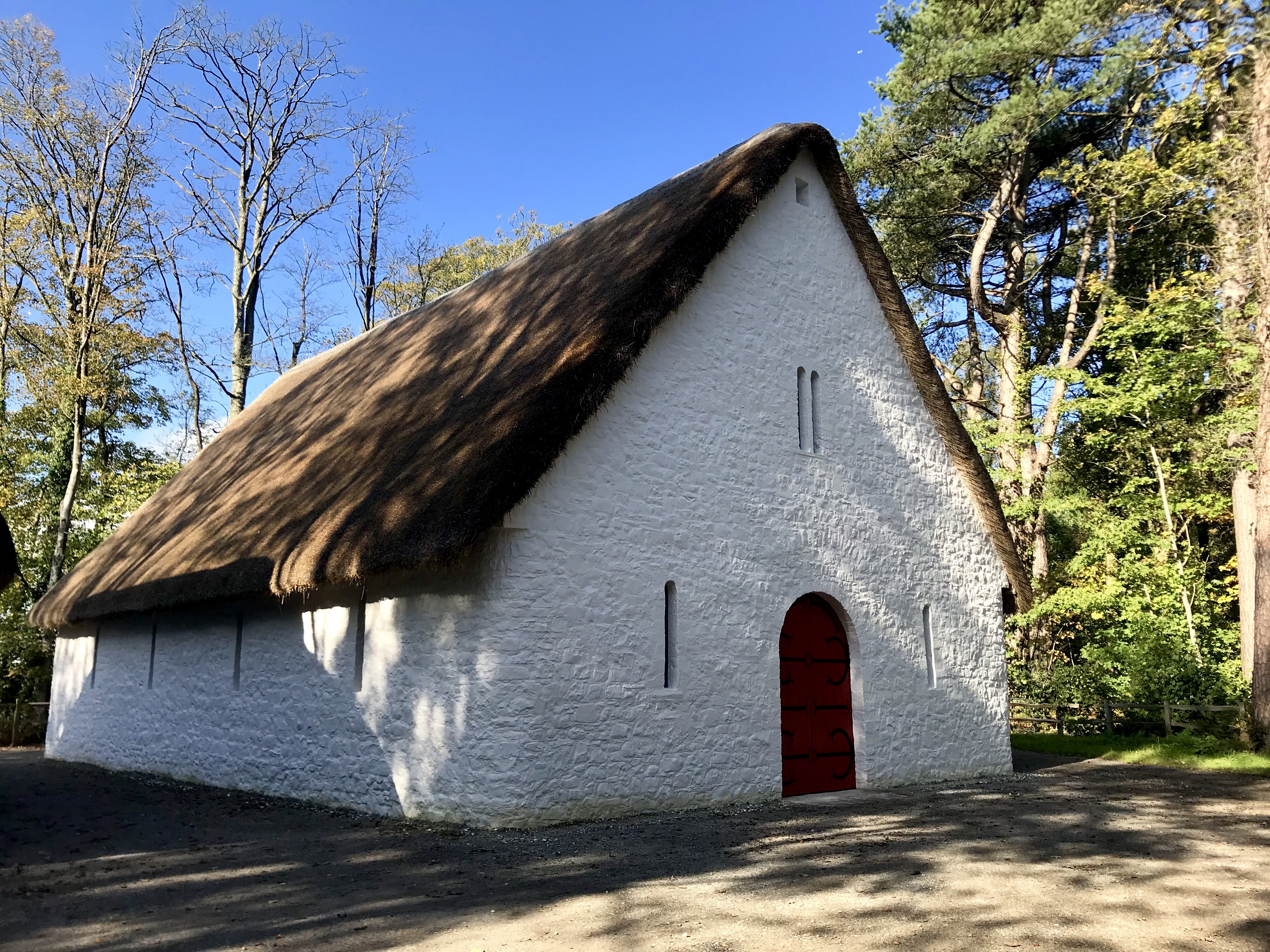 Most of the buildings at St Fagans are actual historical buildings from across Wales re-built on the St Fagans site. However Llys Llywelyn and the Bryn Eryr round houses are reconstructions based on historical evidence. 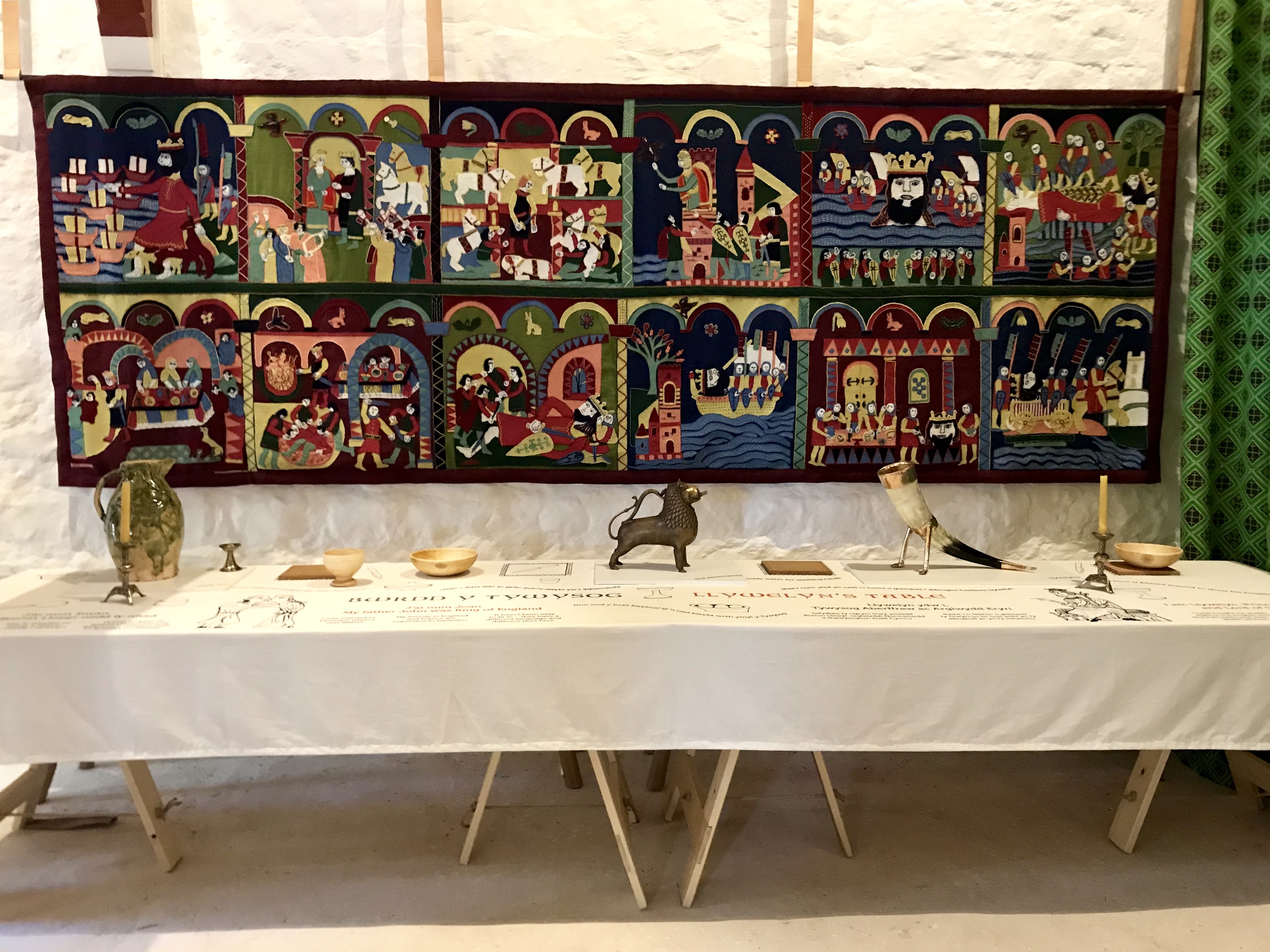 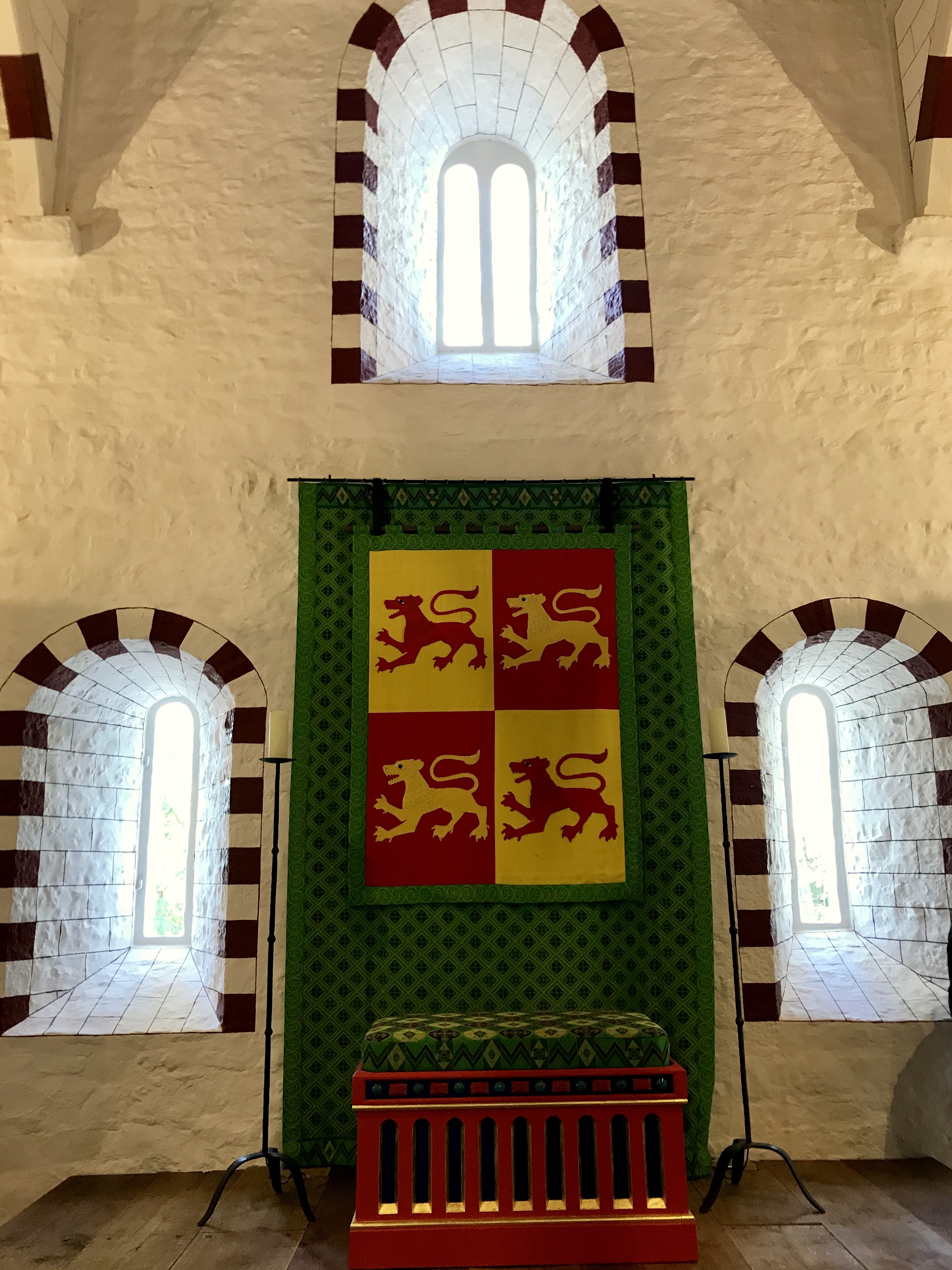 Llys Llywelyn is a reconstruction of a medieval prince’s court belonging to Llywelyn ap Iorwerth, Prince of Gwynedd from 1195 to 1240 and is based on archaeological architectural and historical evidence from Llys Rhosyr on Anglesey. With its thatched roof white walls; red and white painted windows and pillars; and colourful tapestry wall hangings depicting the Welsh legends of the Mabinogi it is unlike anything else at St Fagan and offers a real window into 13th century royal Welsh life.

Excitingly from next Easter school children will be able to sleep over in the Llys and take part in educational activities around medieval life.

The Iron Age roundhouses when they first opened to the public in summer 2016 (you can read more about our experience of visiting Bryn Eryr here). 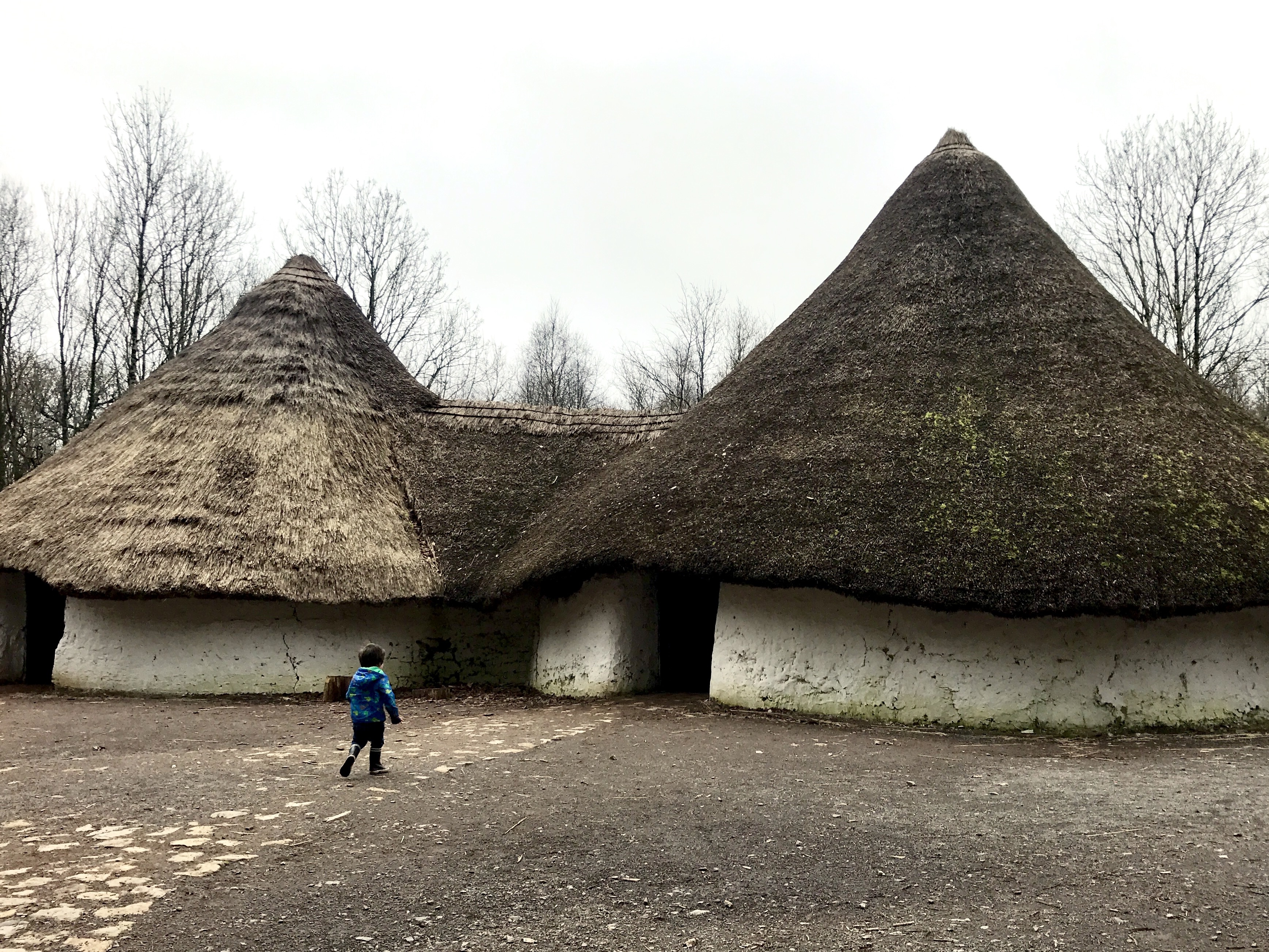 The rural settlements consists of two roundhouses built with six-foot thick clay walls and large conical thatched roofs. These reconstructions are based on archaeological excavations at Llansadwrn, Anglesey between 1985 and 1987. The houses date back around 2,000 years, and the reconstructions saw around 1,500 volunteers using ancient techniques such as making the walls from clom and thrust thatching the roof. Inside the two conjoined houses, a fire heats a large cooking pot, with a bread oven nearby. 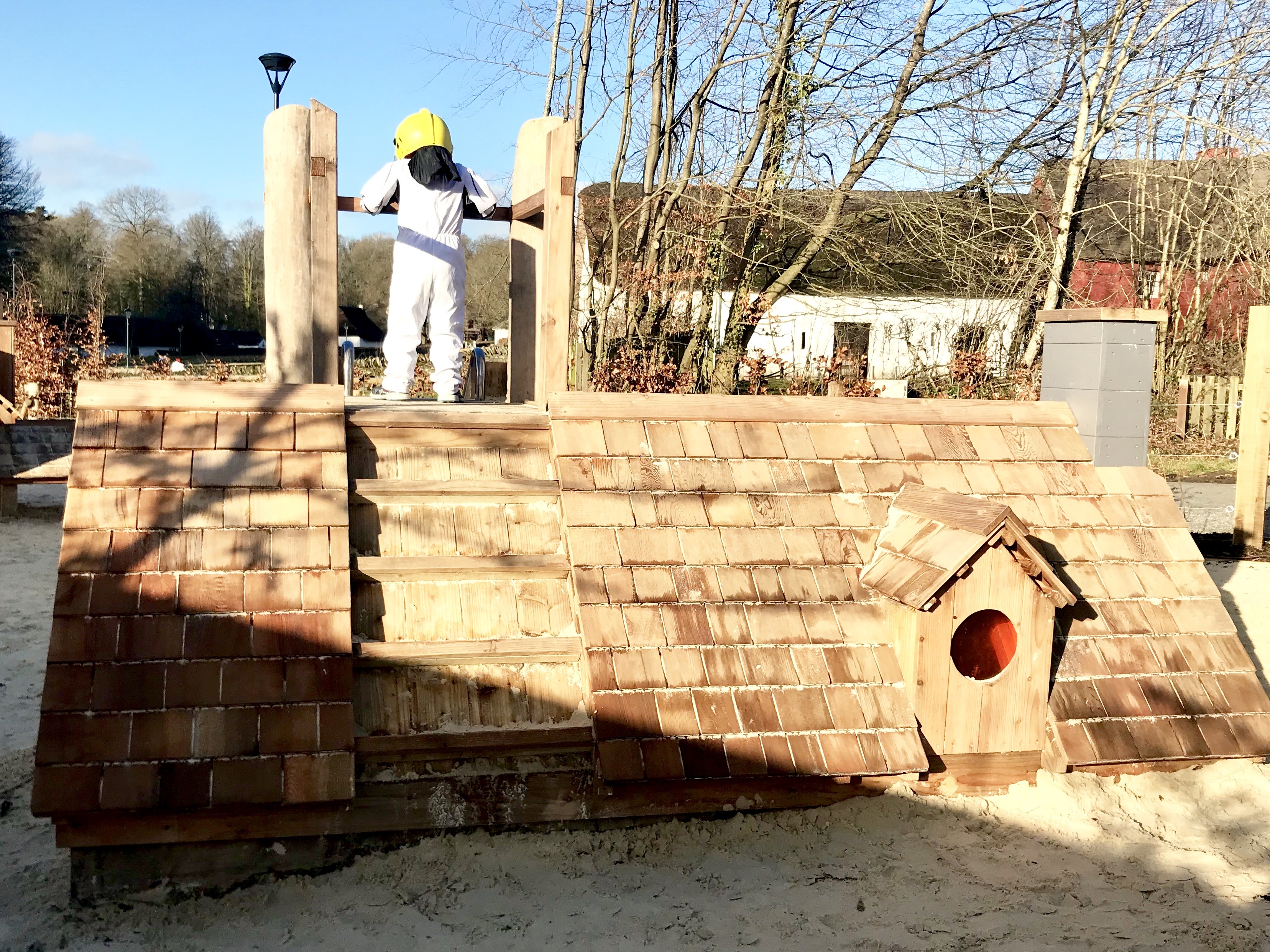 Called Yr Iard or The Yard St Fagans’ new playground opened in February of this year (you can read my full review of Yr Iard here).

It was designed especially for St Fagans by artist Nils Norman who was assisted by fellow artists Fern Thomas and Imogen Higgins. It was funded by the Arts Council of Wales and the Heritage Lottery Fund. 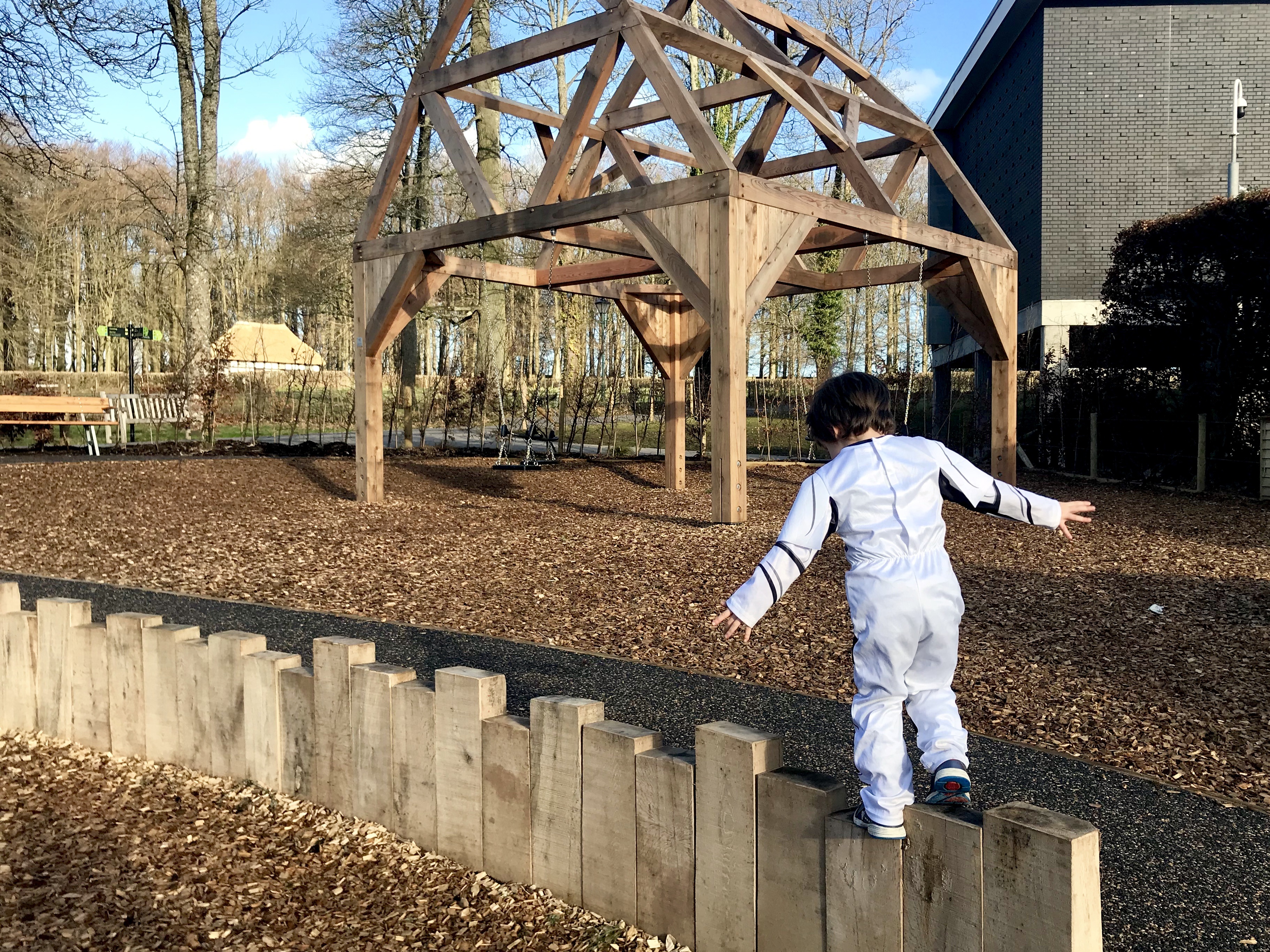 The artists worked with children from Woodland High School and Hywel Dda Primary School as well as researching the museum’s collections and archives to come up with the design. Much of the equipment is based on historic buildings at the museum and it has a traditional and natural feel about it.

My children love the roof-shaped climbing structures and the rope-netted climbing frame as well as the sandy area.

Have you been to St Fagans recently? I’d love to know your thoughts either in the comments below; on the Cardiff Mummy Says Facebook page; or you can tweet me on @cardiffmummy