Wow! What an action-packed, slickly choreographed, visually impressive two hours of a show we saw today in the shape of CBeebies Live – Justin and Friends: Mr Tumble’s Circus.

I must admit to being a bit apprehensive about taking my children to see this show at Cardiff’s Motorpoint Arena. All three of my little ones have been regularly going to the theatre since they were tiny so they are used to live entertainment, but this is the first big-scale show they have been to, and I was worried as to whether the sheer number of people, the noise, the lights and so on would be too much for them. It wasn’t. They absolutely loved it from start to finish, as did Cardiff Daddy and I. 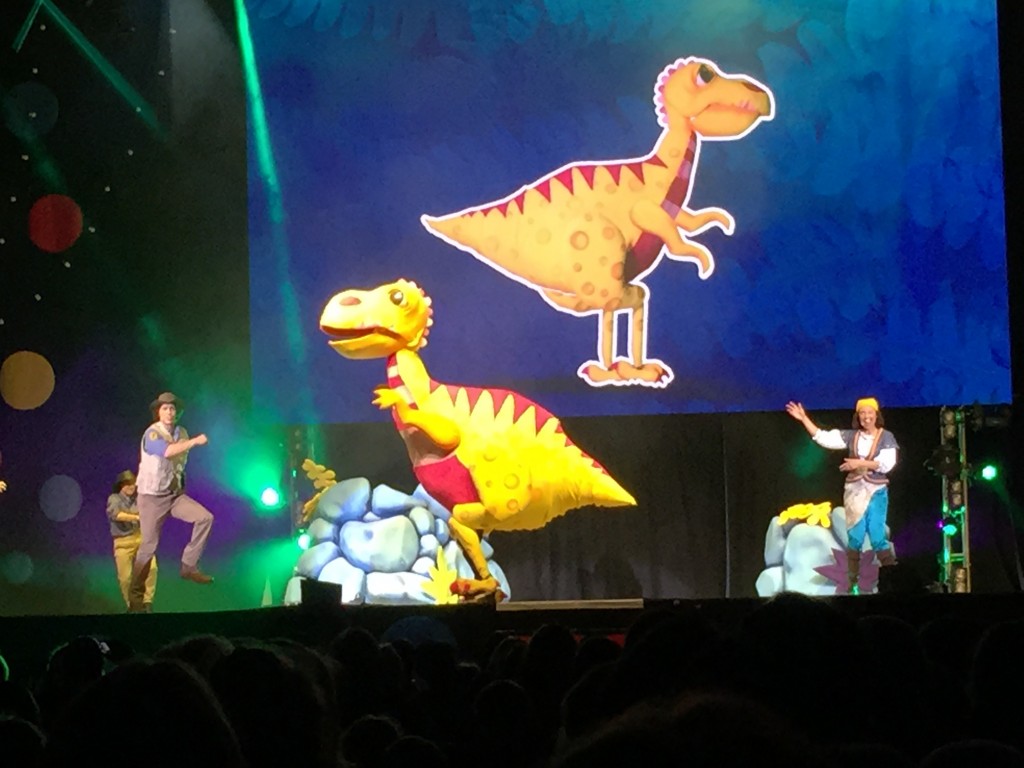 The show follows CBeebies presenter and general children’s television legend Justin Fletcher and a host of other CBeebies characters as they prepare to welcome Mr Tumble’s Circus into town. However, with nothing going to plan, the circus is in danger of not happening at all – so Justin and TV favourites Andy Day, Cat Sandion and Gem must save the day.  This main narrative is threaded around a host of scenarios that see the cast hunting for dinosaurs, a group of dads up on the stage taking part in a fitness challenge, a broken washing machine flooding the stage with soap suds and prompting a giant foam party, and a finale fit to bursting with circus tricks, singing and dancing.

My five-year-old daughter Little Miss E, and three-and-a-half-year-old son Little Man O, were captivated throughout. Baby Boy I, who has just turned one, was probably slightly younger than the target audience and spent half the show laughing along and the other half wanting to wriggle around. The joy of being the third child is that he often finds himself attending these things with his older siblings, but he looked like he was having a good time anyway and clapped and danced along for much of it.

The other two were shouting their hearts out at the obligatory “he’s over there” moments as the presenters asked for help in finding dinosaurs and monsters. The entire audience loved singing along with Mr Tumble’s Hello song (it’s a shame we only got the one chance as you could see the children bouncing on their seats in excitement at being able to sing along to a song they know so well from their televisions) and the youngsters thought Mr Tumble tripping up on the stage and getting us all to beep our noses was hilarious.

Those who are familiar with Justin Fletcher and his various CBeebies shows Something Special, Justin’s House and Gigglebiz, will know he plays countless characters, most of who he has created himself. I wondered how he would manage to perform all of these roles without the magic of pre-recorded television. He had a fair few costume changes, but was aided by a giant screen above the stage, with certain characters appearing on film. This worked well, as it kept the action moving around the stage, thus holding everyone’s attention, and also gave the stage hands the chance to swiftly change the sets while the stage lights were dimmed and no one was paying attenton. 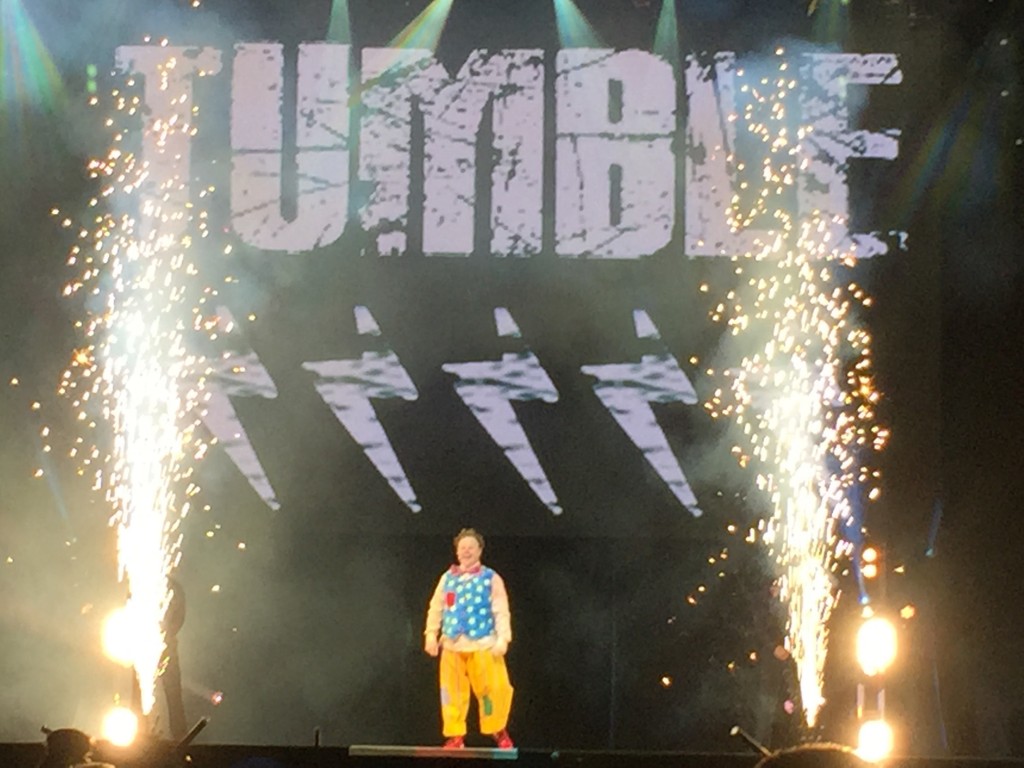 I don’t want to give too much away, as I know a lot of you reading this will be going to see the show yourselves, but at the start of the second act, Mr Tumble enters the arena singing Robbie Williams’s anthem Let Me Entertain You. I couldn’t help but think what an apt song choice this is for a man who does indeed entertain millions of children every day and who might be in his mid-40s but has the energy and passion to captivate a whole arena – twice in one afternoon!

Over the last couple of days, my children have struggled to get their head around the idea that “the actual really real” Justin/Mr Tumble would be here in their hometown of Cardiff. Little Man O kept asking if it would be like going to the cinema. So you can imagine how excited they were when one of their television heroes not only appeared on the stage but also ran down the aisle right next to them. 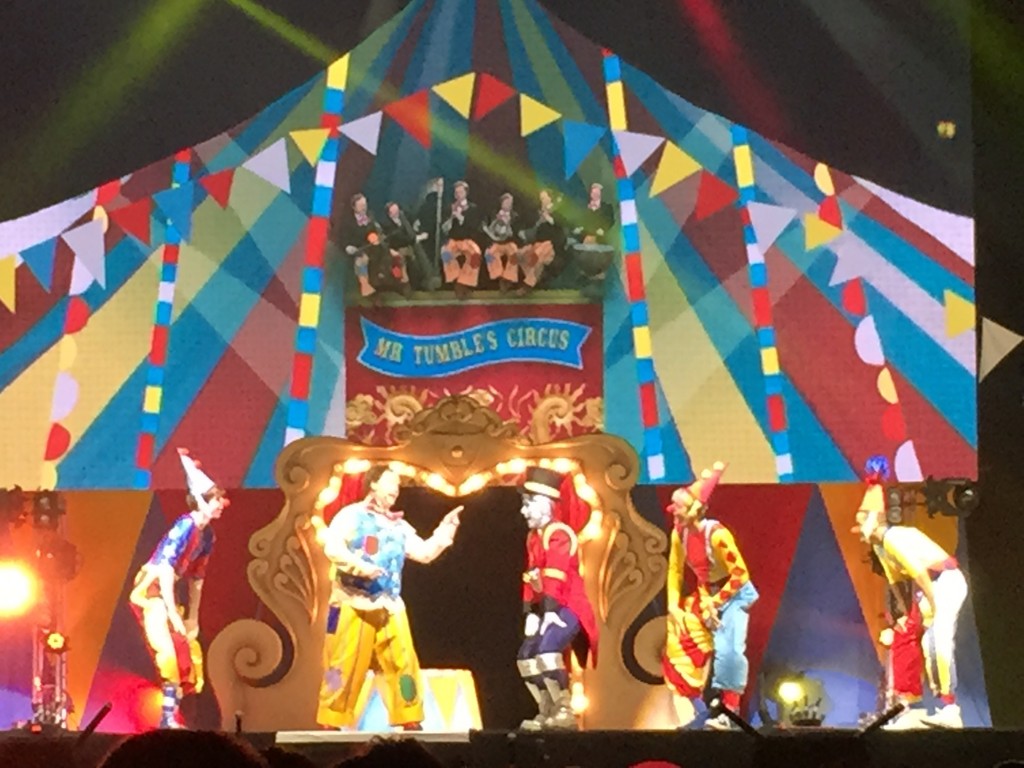 They were just as awe-struck by the circus tricks – the unicycling, plate spinning, juggling and acrobatics. They have never really seen anything like this before. Surrounded by so much colour on the stage, and accompanied by backing dancers, the whole experience looked stunning too.

The best part of two hours (including a 20-minute interval) flew by. In short, Justin’s House: Mr Tumble’s Circus is an energetic and colourful spectacle of a show that gets the audience involved from the get-go in singing and dancing, has us shouting along, and combines polished dance routines and circus skills with good old fashioned fun and games. We had a great time.

Justin and Friends: Mr Tumble’s Circus is also at Cardiff’s Motorpoint Arena on Thursday 2nd April at 11am and 2pm. For more information, see http://www.cbeebieslive.com/ or www.motorpointarenacardiff.co.uk

Have you been or are you going to CBeebies live? Do let me know on the Cardiff Mummy Says Facebook page or by tweeting me on @cardiffmummy

Disclaimer: we were give a family ticket for the purposes of an honest review.