*Thanks to Theatr Iolo for inviting us to see the show in exchange for this review.

You know that old saying about how young children much prefer playing with the boxes their Christmas and birthday presents come in, rather than the toys themselves? The reason people say it so much is because it’s so true. A big cardboard box can be anything you want it to be – a boat, a table, a hiding place – and that’s exactly the starting point for Boxy and Sticky, a brilliant new children’s theatre production for two to five-year-olds from Cardiff-based Theatr Iolo.

Created and directed by Sarah Argent – who was also behind Theatr Iolo’s Luna and Out Of The Blue, two highly-acclaimed shows for young children and babies respectively – this production perfectly captures the minds of young children when they are left to play freely and their imaginations to run wild.

From the moment we enter the studio theatre at Cardiff’s Chapter Arts Centre, it’s clear the company have thought hard about how best to make sure its target audience do not feel intimidated by what for many could be their first experience of theatre. There’s a big space for buggies at the back of the auditorium for a start, and instead of formal seating, young children are invited to sit on large cushioned mats right in front of the stage area. This was perfect for me and my three children, aged 5, 3.5 and one, as it meant baby had room to wriggle about, rather than being sat on my lap for 45 minutes, and there was no chance of my children’s views being obscured by adults being sat in front of them. 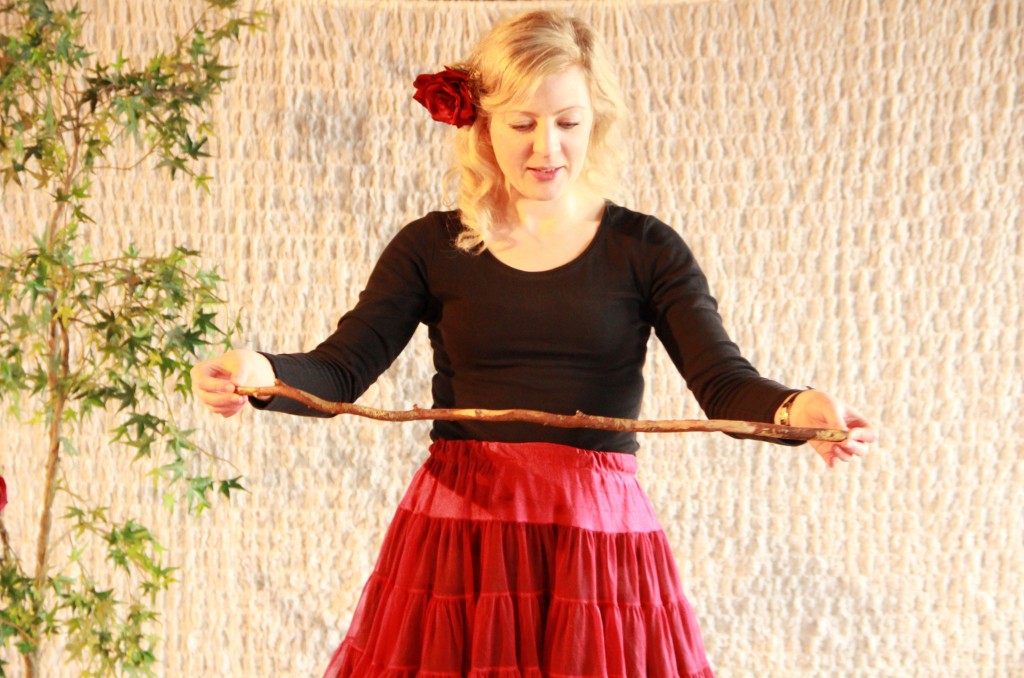 As we enter, we are greeted by Ceri Elin, who plays the Sticky of the show’s title, already sat on stage dressed in sparkly shoes and a gorgeous red frock that my daughter thought was simply wonderful. She gently smiles and chats warmly to the children and before we know it the show has started. She discovers a large stick and holds our attention for several minutes as she plays with it – before we hear some knocking from inside a large cardboard box at the side of the stage. It turns out Sticky has forgotten she was supposed to be playing hide and seek and her play-partner (played by Kevin Lewis, who is also Theatr Iolo’s artistic director) has been hidden away in the box all this time.

The two nickname each other Sticky and Boxy on account of the items they are playing with, and embark on a series of make-believe adventures that see them having a dinner party that descends into a food-fight, sailing on a boat that gets overturned in a storm, using the boxes as drums to create a musical masterpiece, and Sticky using the stick as a magic wand to transform Boxy into a series of animals and other objects. The children thought this last one was especially hilarious. My two eldest, and several of those around me, were laughing so hard their bodies were shaking. However the games soon descend into squabbles when Sticky feels Boxy is not playing by the rules. You can see the parents in the room smirking in recognition at this point, and it reminded me of how my two eldest can be best friends one minute, worst of enemies the next.

There was a heart-warming twist at the end of the show, which I didn’t see coming. I don’t want to spoil it for those of you who may also be going along, but it was a lump-in-throat moment for me. It was a reminder for us as parents that although the nonsensical rules and being asked to play the same game a thousand times may sometimes test our patience, a young child’s imagination is so very precious and the games they play so enchanting, we should treasure these times before they are gone.

After the show, the young audience members were invited to stay and play for 20 minutes or so in an imaginative, informal workshop based on elements of the show. My two had great fun playing with boxes and re-enacting some of the scenes from the show. As we left the auditorium, the little ones were given the chance to draw a picture on a giant canvas created with cardboard boxes. We were the first audience to see the show, but I can only imagine what a wonderful collective art work this will be by the end of the week.

It’s testament to Theatr Iolo that getting my children to come home was nigh-on mission impossible. They were so inspired and captivated by it all that they really didn’t want to leave the giant boxes they were decorating and playing in, and chatted non-stop about what they had seen on the way home.

I spoke to Sarah Argent after the show and she said that they are hoping to tour the production in the future, as well as working with schools to introduce theatre to those who might not always have access to it. This is the perfect introduction to theatre for pre-schoolers, as well as being a reminder that you don’t need expensive toys when you have an imagination to play with instead. My children do a lot of imaginative playing anyway, but this made me want to encourage them to do a whole lot more. Well done Theatr Iolo for a heart-warming, funny and inspiring piece of theatre for young children. We loved it!

Have you seen Boxy and Sticky? Come and join the chat on the Cardiff Mummy Says Facebook page, or tweet me on @cardiffmummy

Have you seen my blog post on 50+ things to do in and around Cardiff this Easter holidays?

Disclaimer: We were given complimentary tickets for this show for the purposes of an honest review. A version of this review also appears on www.theatre-wales.co.uk