The actual spacecraft which took British astronaut Tim Peake into space and safely transported him back to Earth has landed at National Museum Cardiff to much excitement and attention. You might have seen the news headlines that the museum had to remove Perspex panels above its entrance so that it could squeeze the spacecraft in.

But now it’s firmly place and will be on display here in Cardiff until Sunday 10 February 2019 as part of a national tour presented by global technology company Samsung and the Science Museum Group, which bought the spacecraft.

Tim Peake’s Spacecraft officially opened on Thursday and we were excited to be among the first visitors to this real piece of space history.

Today (Saturday 17 November) sees a space-themed launch day with music provided by the Royal Welsh College of Music and Drama; space themed family crafts; Cardiff Astronomical Society on hand to tell visitors more about the capsule itself and to answer any space questions; plus more.

Here’s what you can expect from the exhibition.

From the moment we entered the free-to-visit exhibition it felt space-like with low lighting and black walls. The capsule is the first thing you see as you walk in through the doors – or the Soyuz Descent Module TMA-19M, to give it its full name. 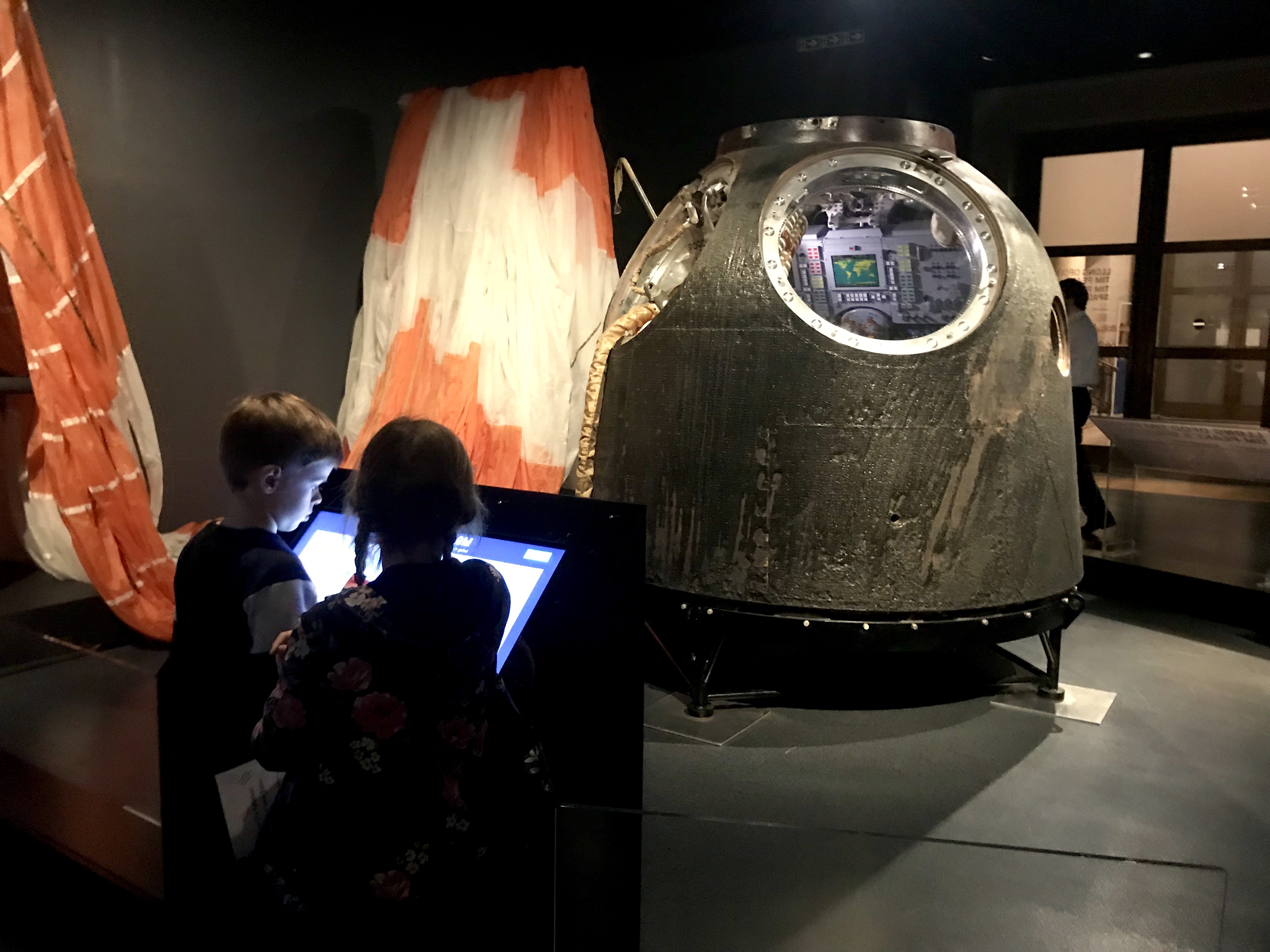 Flight Engineer Tim Peake was accompanied on Soyuz TMA-19M by astronauts Yuri Malenchenko (Commander, Russia) and Tim Kopra (Flight Engineer, USA) to the International Space Station on 15 December 2015. The same crew returned to Earth in it on 18 June 2016.

This article explains how the capsule travelled in space way better than I ever could. And I’m not sure I could ever get my head around just how amazing science and technology is. But briefly…

The capsule was powered into space by a 50m-high launcher. Also attached was a spherical orbital module for extra living space for the crew during flight. It was then docked onto the space station for the six-month mission. On the way back down to Earth, the spacecraft was boosted by various thrusters and engines before separating from the orbital module – which burned up in the atmosphere. During the final stage of descent a huge orange and white parachute helped slow the craft down so that it could land on the plains of Kazakhstan. This very parachute is also on display here in Cardiff. Incidentally the Baikonur Cosmodrome in Kazakhsyan is where the mission took off from and it’s also the same place that launched the world’s first astronaut, Yuri Gagarin on 12 April 1961.

I couldn’t believe that three people could travel that far in something so small. But they did. It might weigh 1.5 tonnes but it was way smaller in size than I ever thought a space capsule would be.

The technology and science behind it all completely blows my mind. 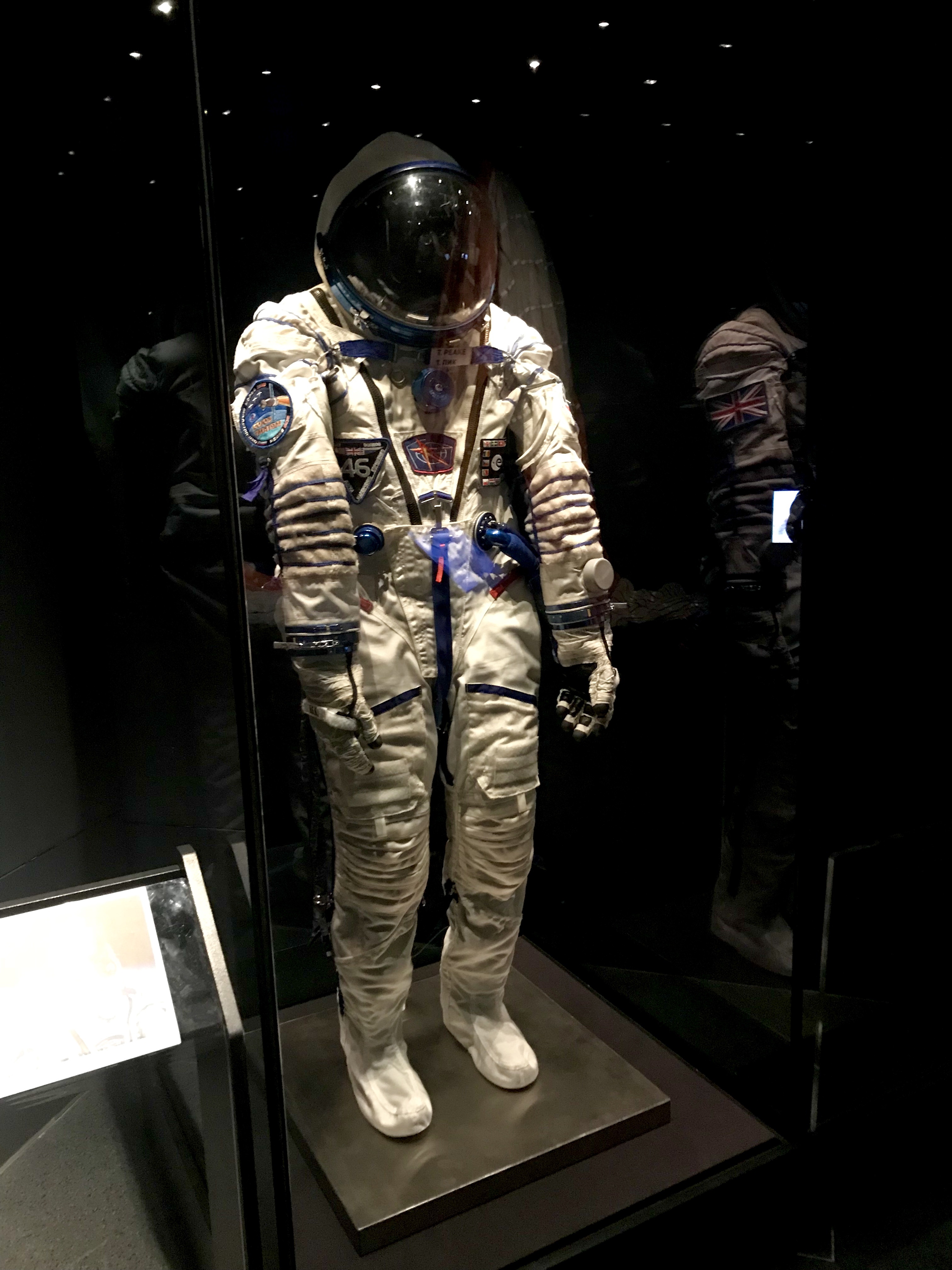 Elsewhere on the exhibition floor you can see Tim Peake’s Sokol KV-2 emergency spacesuit. He wore this in the Soyuz spacecraft and it would have kept him alive had the spacecraft depressurised. You can also see the spacecraft antenna, interactive displays about the International Space Station (ISS) and life in space, while a glass cabinet contains some of National Museum Cardiff’s own meteorites found here in Wales. 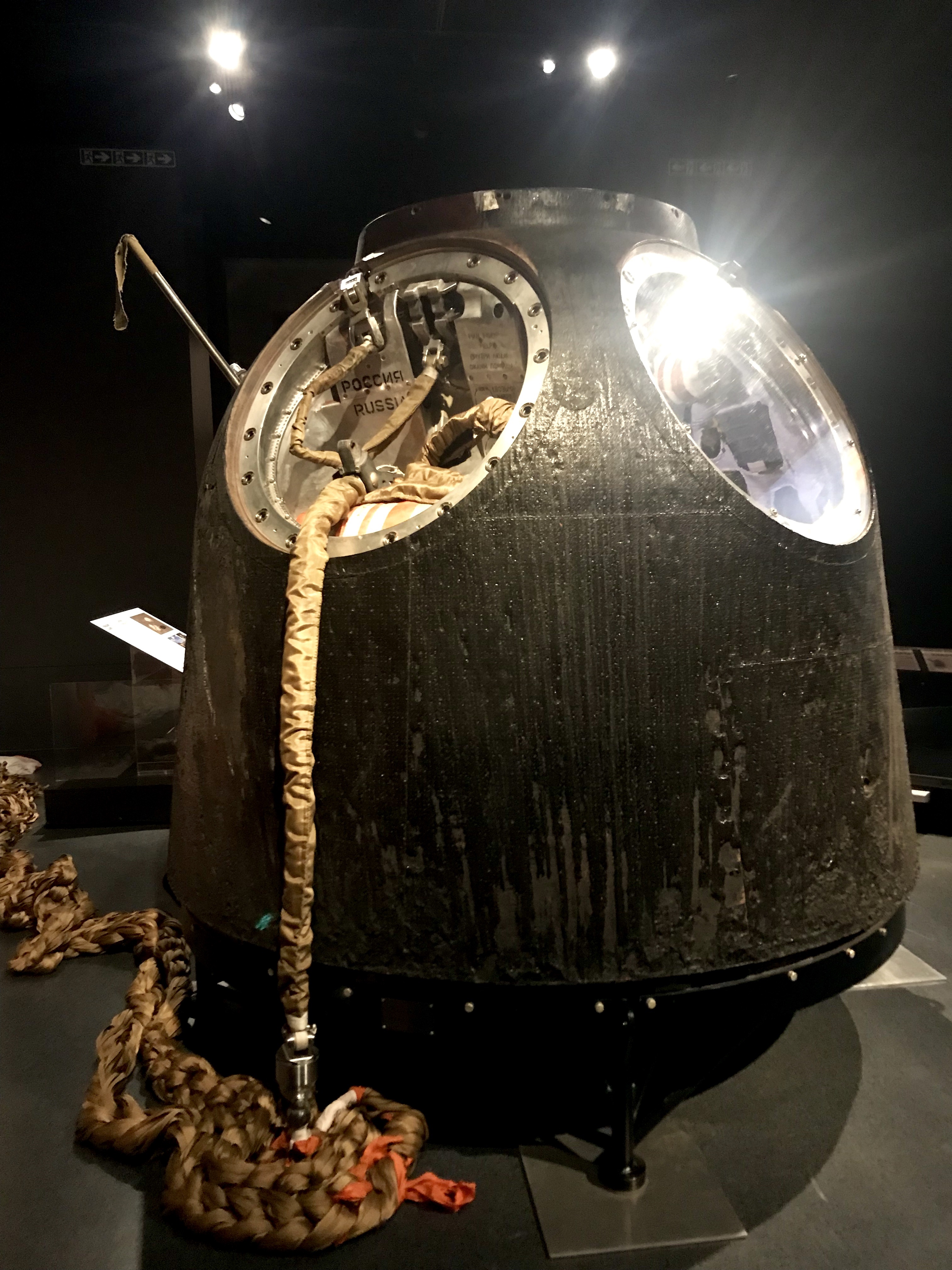 Although the exhibition is fairly small there are good interactive elements for children.

We all loved the replica spacesuit which you can expect to see a lot of on your social media sites these next few months as people can step inside it, move their hands around and pose for photos. 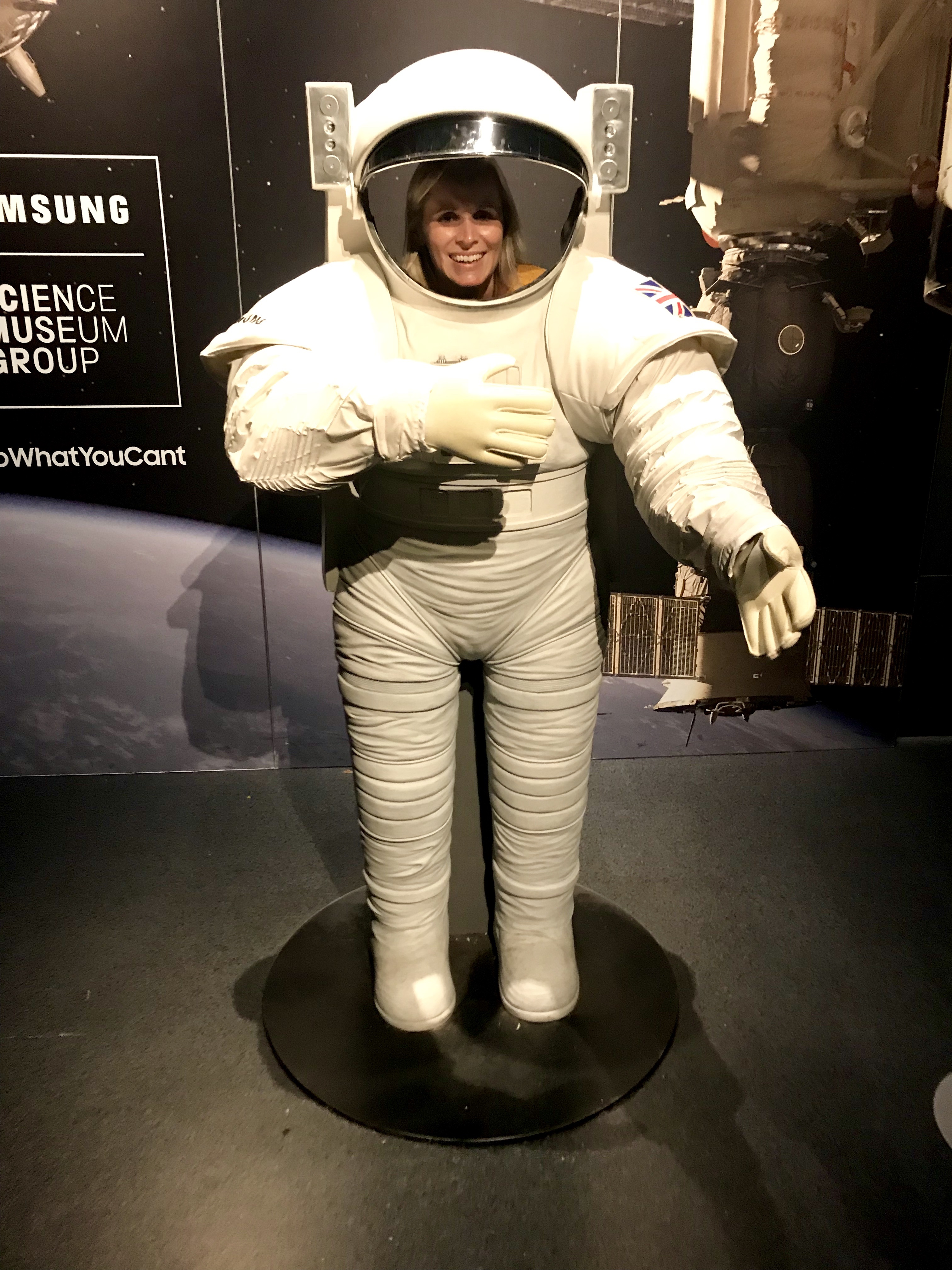 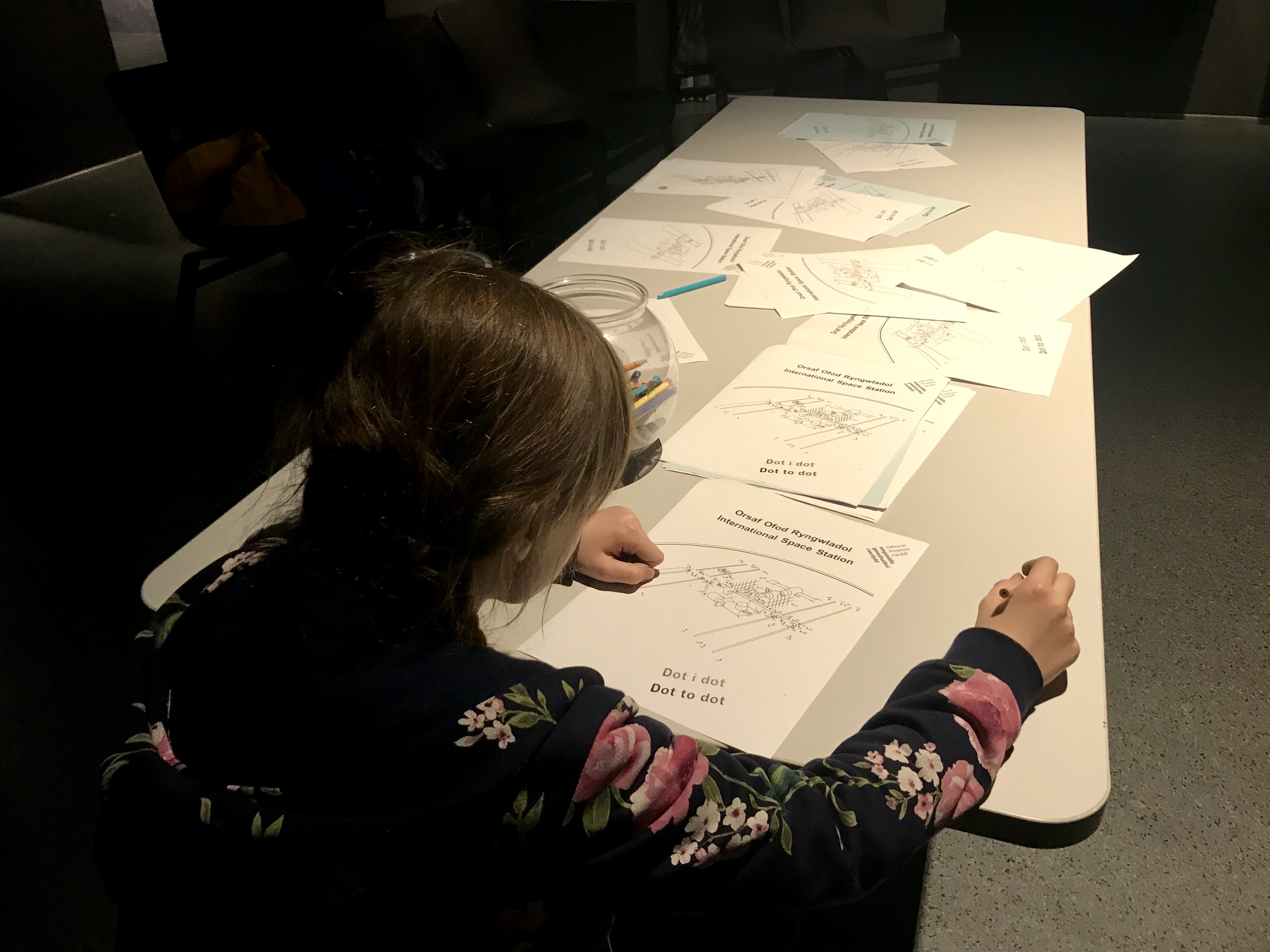 At the back of the exhibition is an activity area for children featuring space-themed dot-to-dot colouring pictures, Mega Blocks for younger children and space Lego for older children. My seven-year-old wasted no time in making his own spaceship. There’s also a printed activity sheet where children can fill in information gained around the exhibition. 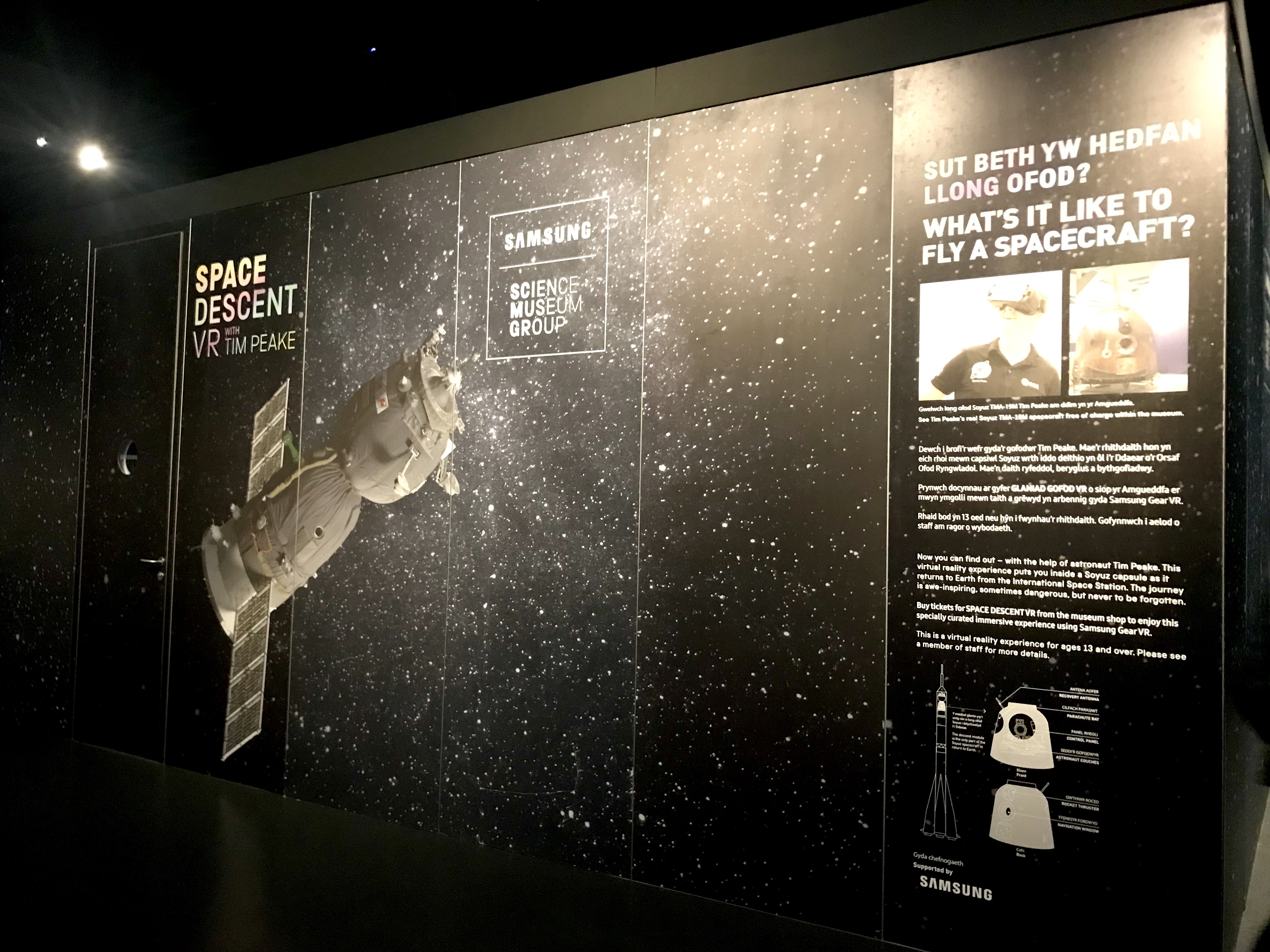 The highlight for many will be the Space Descent Virtual Reality Experience in which visitors can relive the descent from the International Space Station down to earth. It is absolutely incredible. However unfortunately it is only available to those aged 13 and over due to nationwide industry regulations on the use of VR. This meant that sadly my children didn’t get a go… but I did and can highly recommend it. 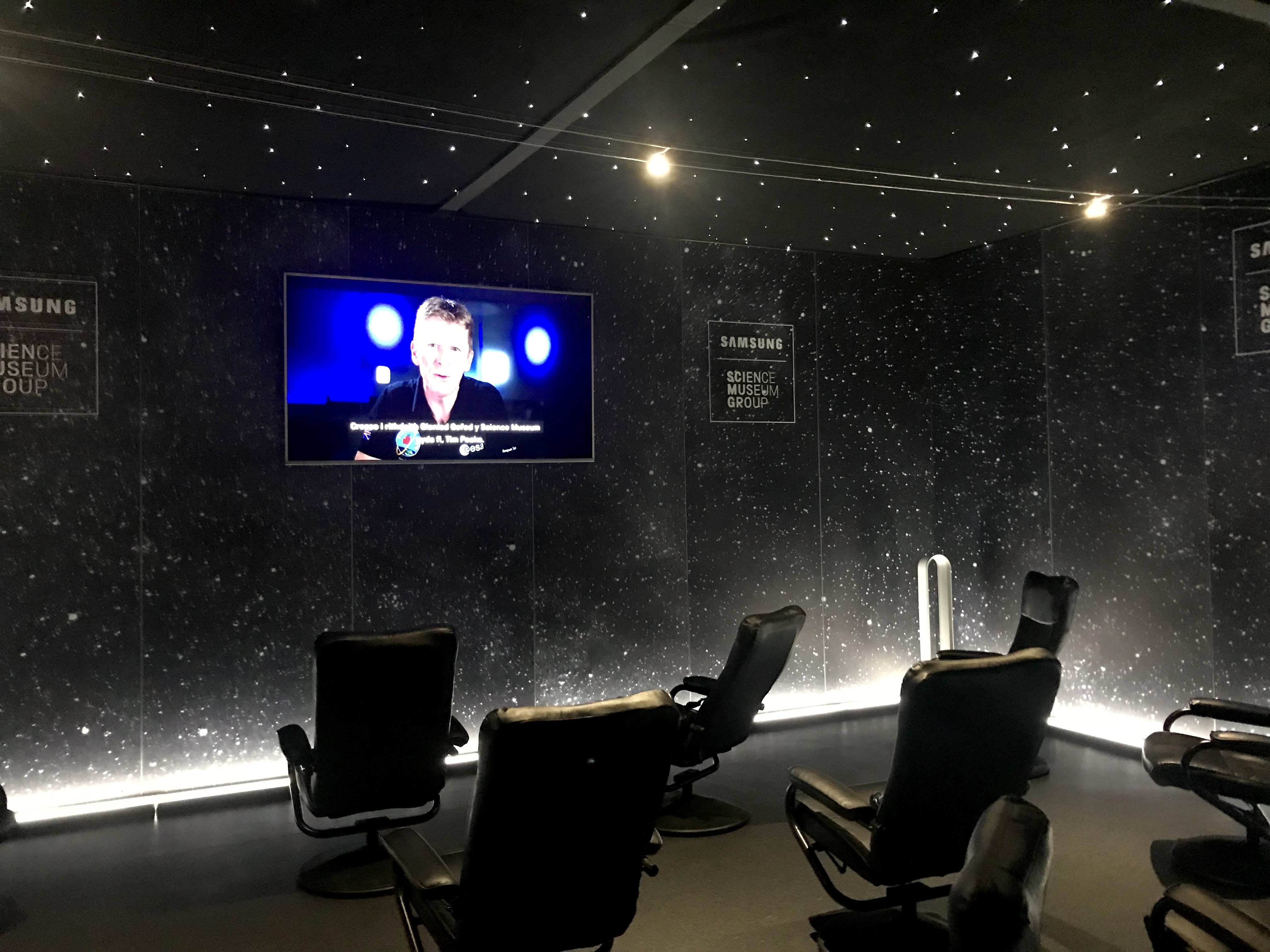 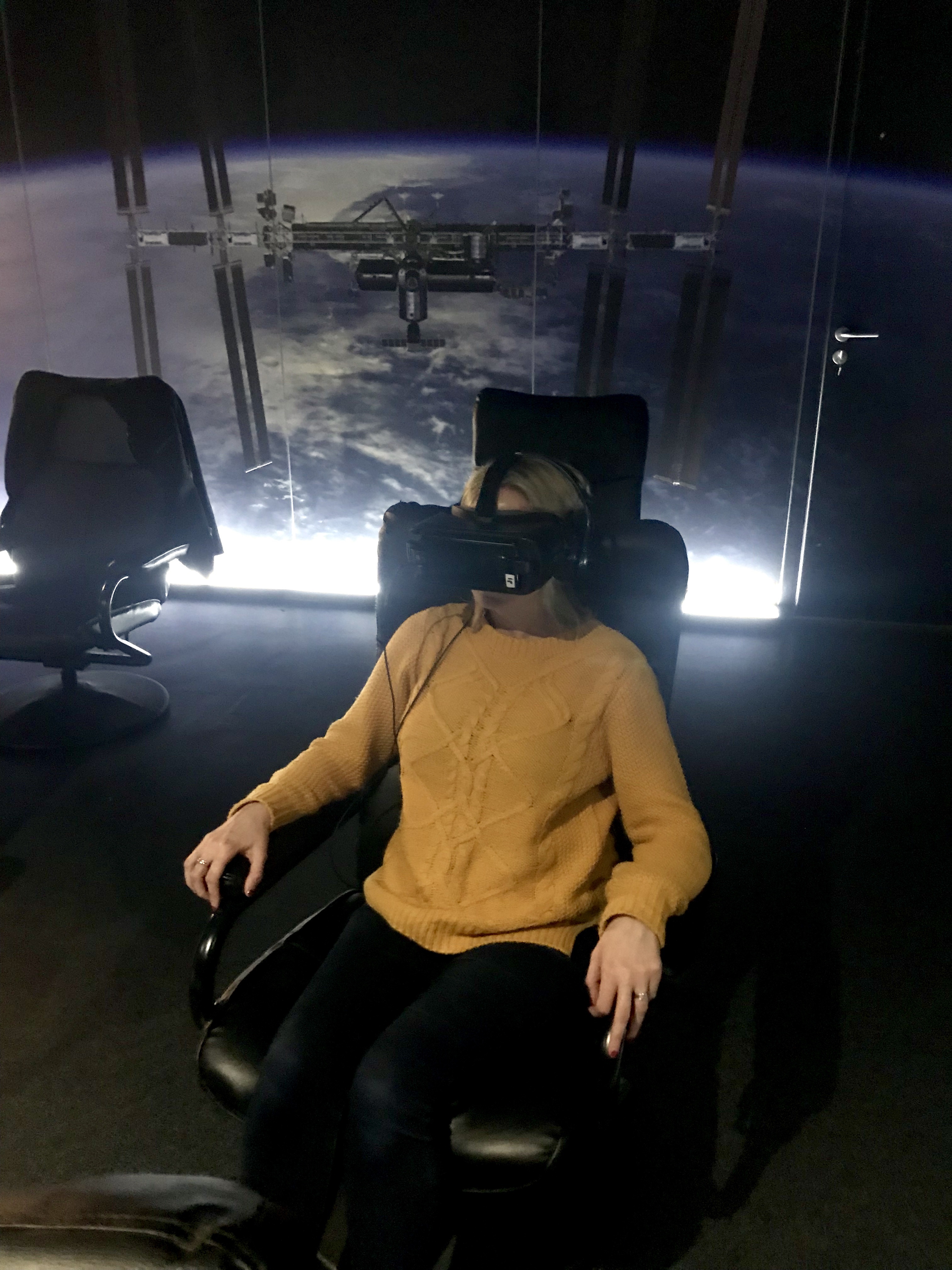 The 12-minute Space Descent VR experience, using technology from Samsung, is narrated by Tim Peake himself. It recreates the experience of making the incredible 250-mile journey back down to Earth from the International Space Station inside a Soyuz capsule.

Costing £6 per person, it’s an all-encompassing experience where you wear VR goggles and a headset so that you are fully immersed in the action. You can look around the entire capsule and even into space – there’s something as far as your head can turn. When you look down at your body, you see a space suit and I found my hands mimicking the actions I was seeing in front of my eyes.

At one point the whole capsule was fiery orange because the outer surfaces were heated to more than 1,500 degrees Celsius as it hurtled through Earth’s atmosphere.

It’s the closest most of us will ever come to being in actual space…. although it’s made me realise I would never in my wildest dreams be brave enough to be an astronaut.

Tim Peake’s Spacecraft runs at National Museum Cardiff until Sunday 10 February 2019. See the museum’s website for more information. The Space Descent Virtual Reality Experience costs £6 per person for people over the age of 13 only. You can book on the day. 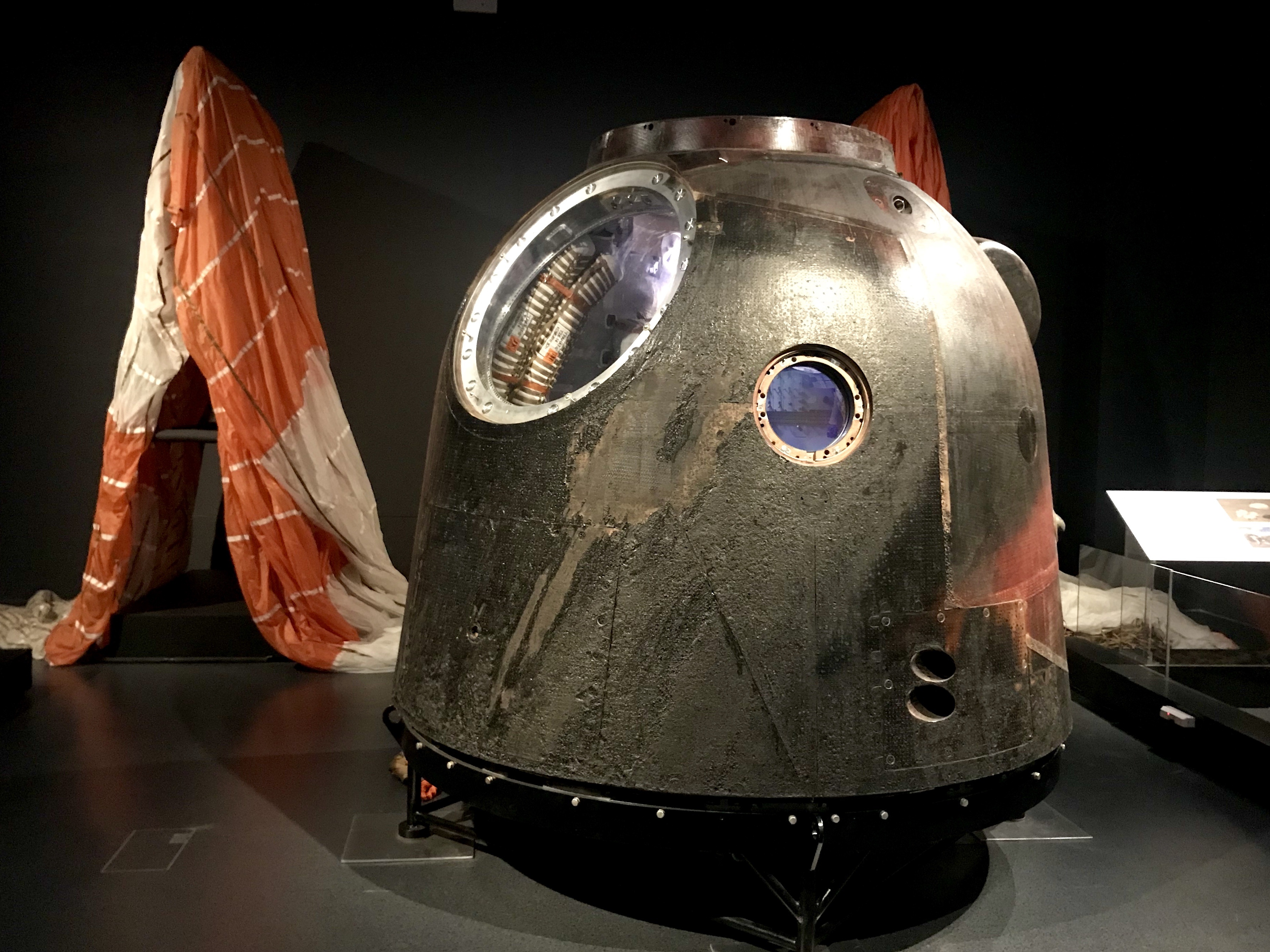 Music provided by the Royal Welsh College of Music and Drama; space themed family crafts; Cardiff Astronomical Society will be on hand to tell visitors more about the capsule itself and to answer any space questions.

A star themed Christmas event with crafts, activities and music all with a little sprinkling of stardust.

Father Christmas will also be bringing his reindeer into land at the Museum from 11am-12.3pm and 2pm-3.30pm both days with a cost of £3 per child.