We received a bowling party for 10 children including food in exchange for this review.

Cardiff Mummy Says is also a family blogger ambassador for The Red Dragon Centre, which involves other paid collaborations.

Now that my two eldest children are getting older, the days of big class birthday parties are slowing down and they and their friends are choosing smaller celebrations for a select few friends instead.

My middle child, who turned eight recently, was delighted when Hollywood Bowl Cardiff at The Red Dragon Centre offered to host a 10-pin bowling birthday celebration for him and his guests at their new VIP lanes.

We headed along on Sunday afternoon for a game of bowling followed by food at the on-site restaurant.

The two-hour party was a huge success – the children had a great time and it was hassle-free for me as a parent.

Here’s how we got on. 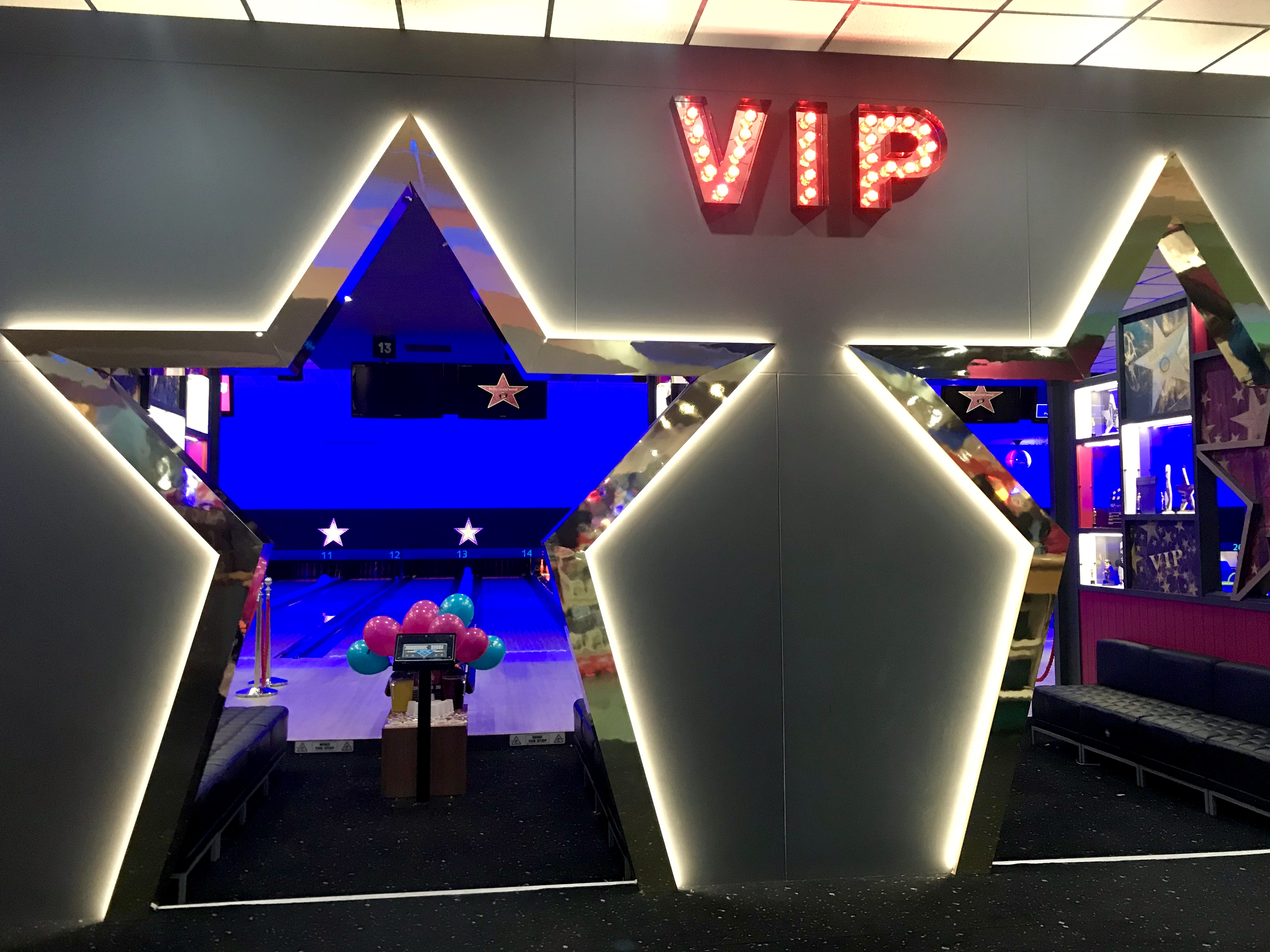 There’s a choice of two different party packages available for children and one for teenagers, with the option to upgrade to the VIP lane for an additional cost. The party experience lasts around two hours.

You can upgrade to the VIP package for an additional £2 extra per person. Kids will bowl on a VIP lane and enjoy an ice cream after their meal.

One of the current party hosts speaks Welsh so Welsh-speaking parties are sometimes an option, subject to her availability.

Our party was the Kids’ Ultimate package, with the VIP upgrade. This includes an hour of bowling on the VIP lane, with unlimited squash, a meal followed by ice cream, and a party host who stayed with us for the duration of the party. 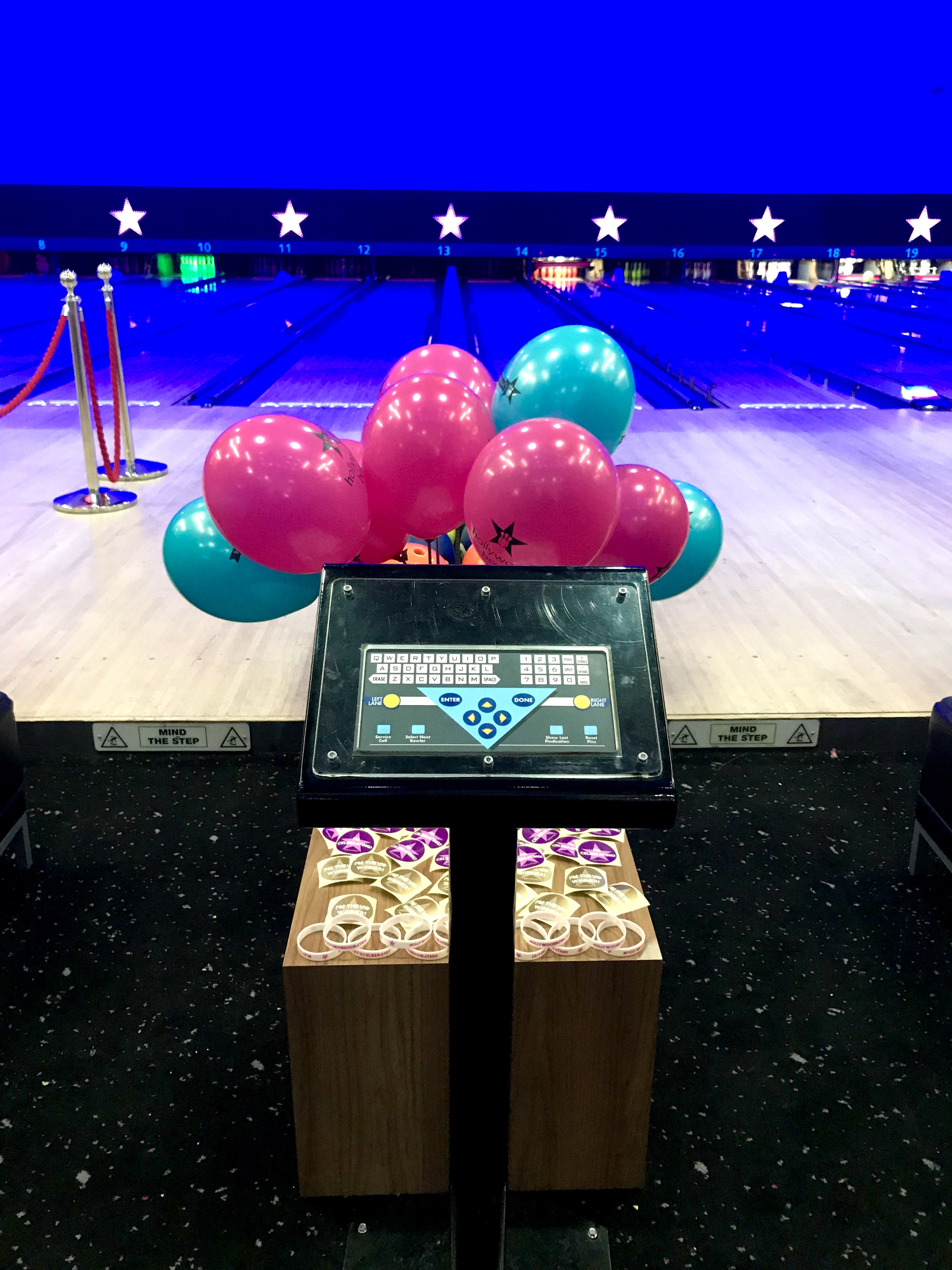 Arrival, pre-game advice, and invaluable help from the party host

We arrived just before our 3pm start time and the staff on the desk introduced us to Hannah, our party host for the afternoon. She introduced herself to the young bowlers – who were bursting with excitement as they arrived and saw each other – and walked us over to our VIP lane.

Here she explained a few health and safety pointers, such as how to lift and carry the ball safely, the dangers of the machine which returns the ball, and of stepping over the lines on the bowling lanes, as well as asking them not to climb or slide on the ‘ramp’ which can help younger players who can’t quite bowl independently yet (more on the ramp later). It was great to have someone official give the kids this safety talk so I didn’t have to feel like the nagging parent! 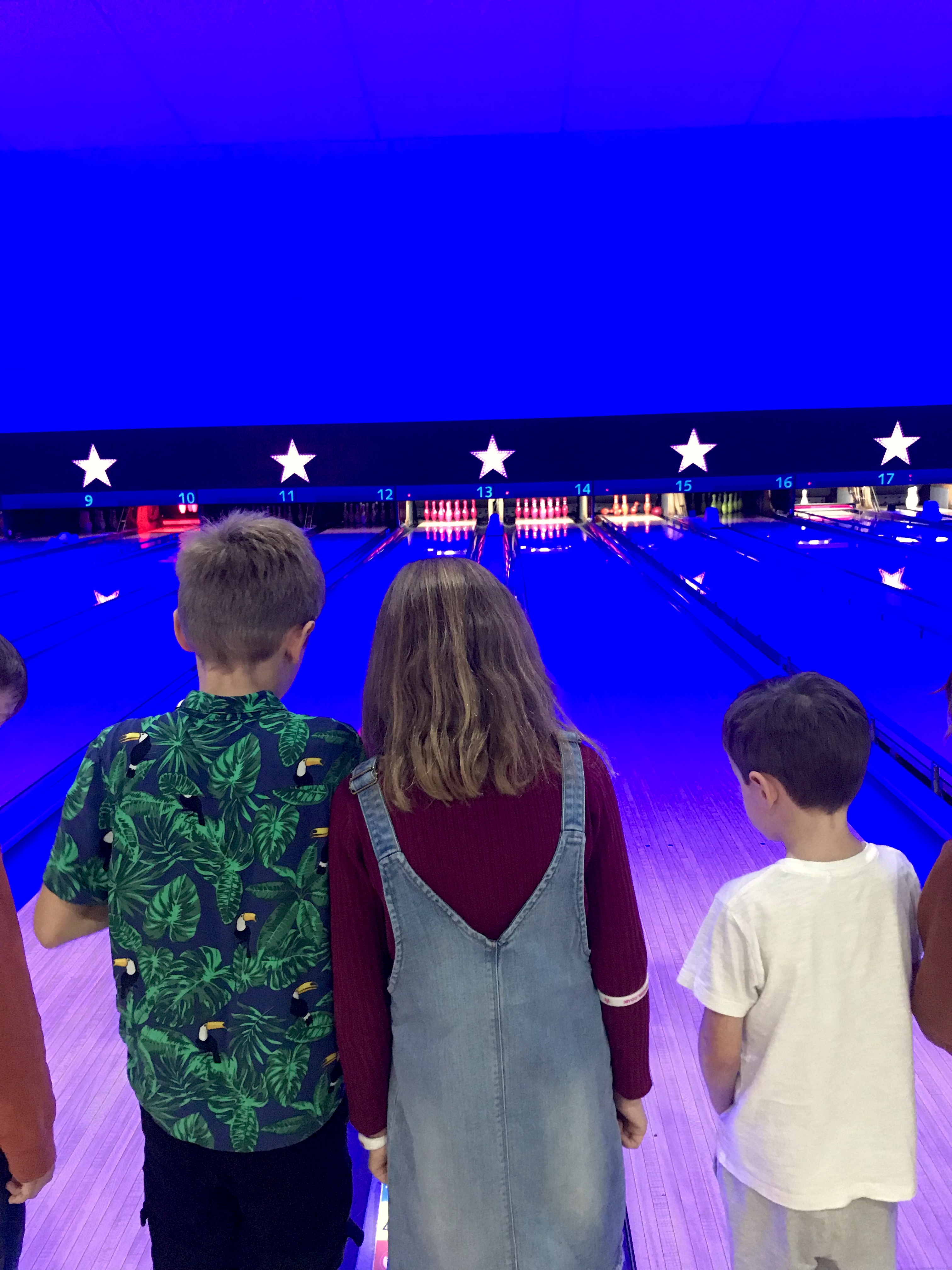 She also gave pointers on how to bowl, explained that the bumpers would be up at the side of the lane so the ball won’t disappear into the gutter and will always make it to the end of the lane, as well as explaining to the children how to use the bowling ramp. This is great for those who can’t quite manage to bowl the balls free-handed – they place the ball at the top, angle the ramp and push the ball down towards the balls. Around half of the children present today used it and it made it so much more enjoyable for them.

Hannah also added the children’s names to the computer screen, took their meal orders, and explained that as they were all wearing trainers, none of them needed traditional bowling shoes, although these are available at the main desk for those wearing unsuitable footwear.

As we had been offered the Ultimate package, Hannah then stayed with us for the duration of the party. We found her incredibly friendly and helpful – she went out of her way to look after us all, talking to the children, dealing with any queries or problems, and assisting some of the children with the ramp and balls. I’d told the other parents they didn’t need to stay for the party, so it was a great help having an extra set of hands and eyes to look after all the energetic children. This is definitely a plus-point of the more expensive party option.

The new VIP lanes at Hollywood Bowl at The Red Dragon Centre opened over the summer and are really impressive. Located just behind the main desk, in the centre of the bowling lanes, they are encased by black walls with star-shaped entrances leading you inside. There are four lanes in total, split into two sets of two lanes, with a wall in between. The enclosed space worked really well at containing the children and they loved the Star Wars themed display on one of our walls. It made the party feel extra special and the guests and birthday boy extra important. We had 10 children in total, with five in each lane – each lane can host a maximum of six bowlers. 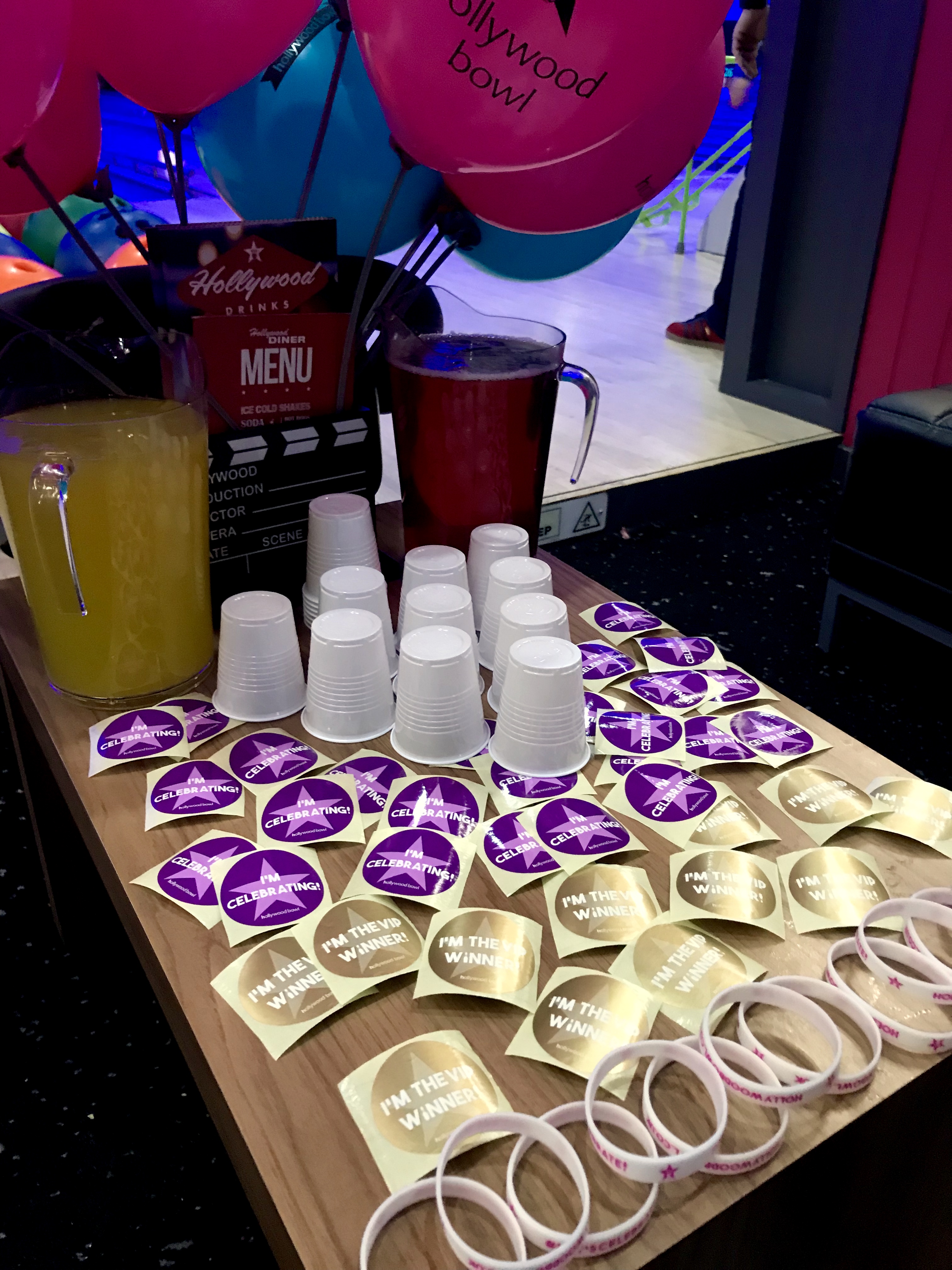 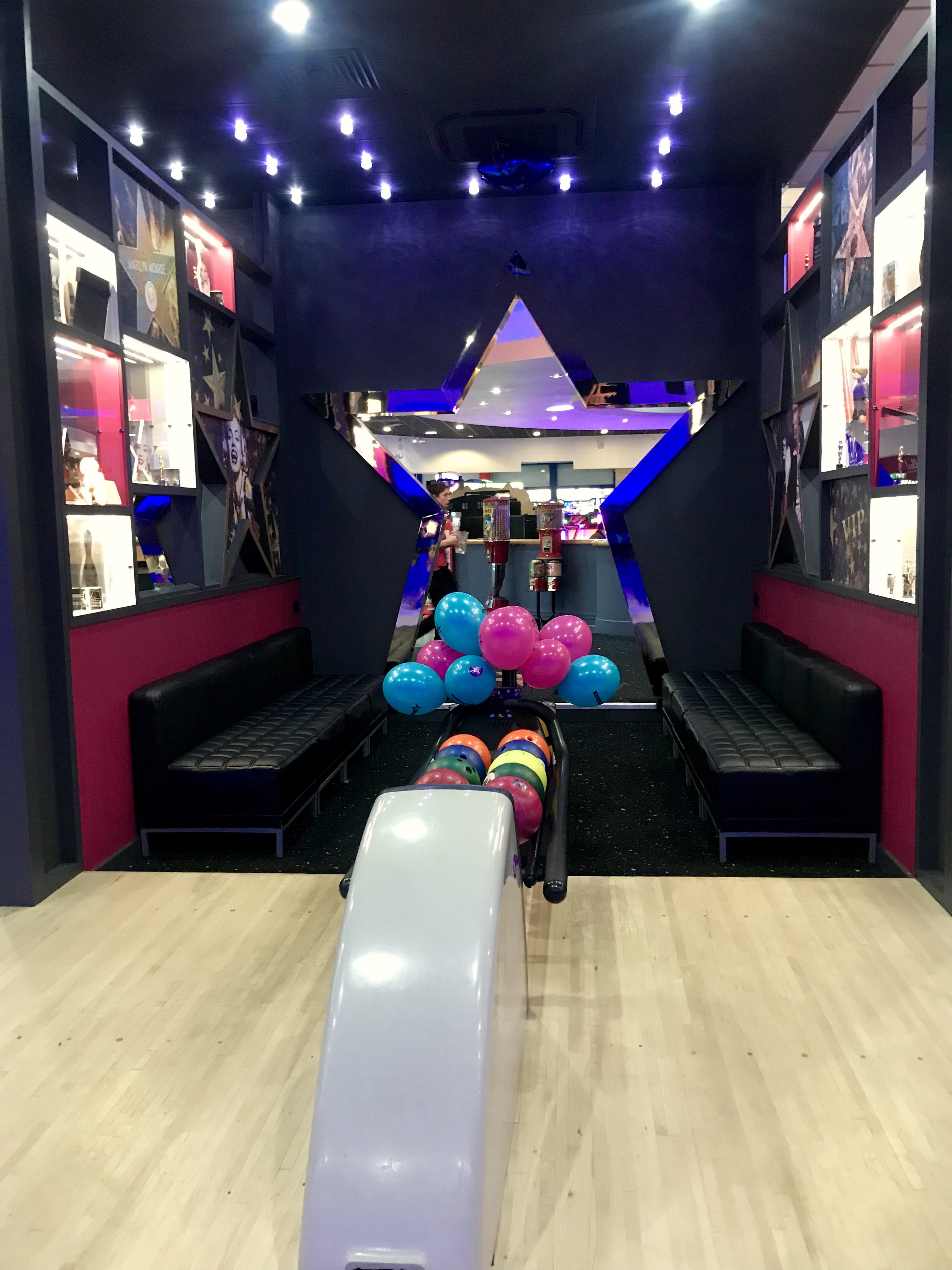 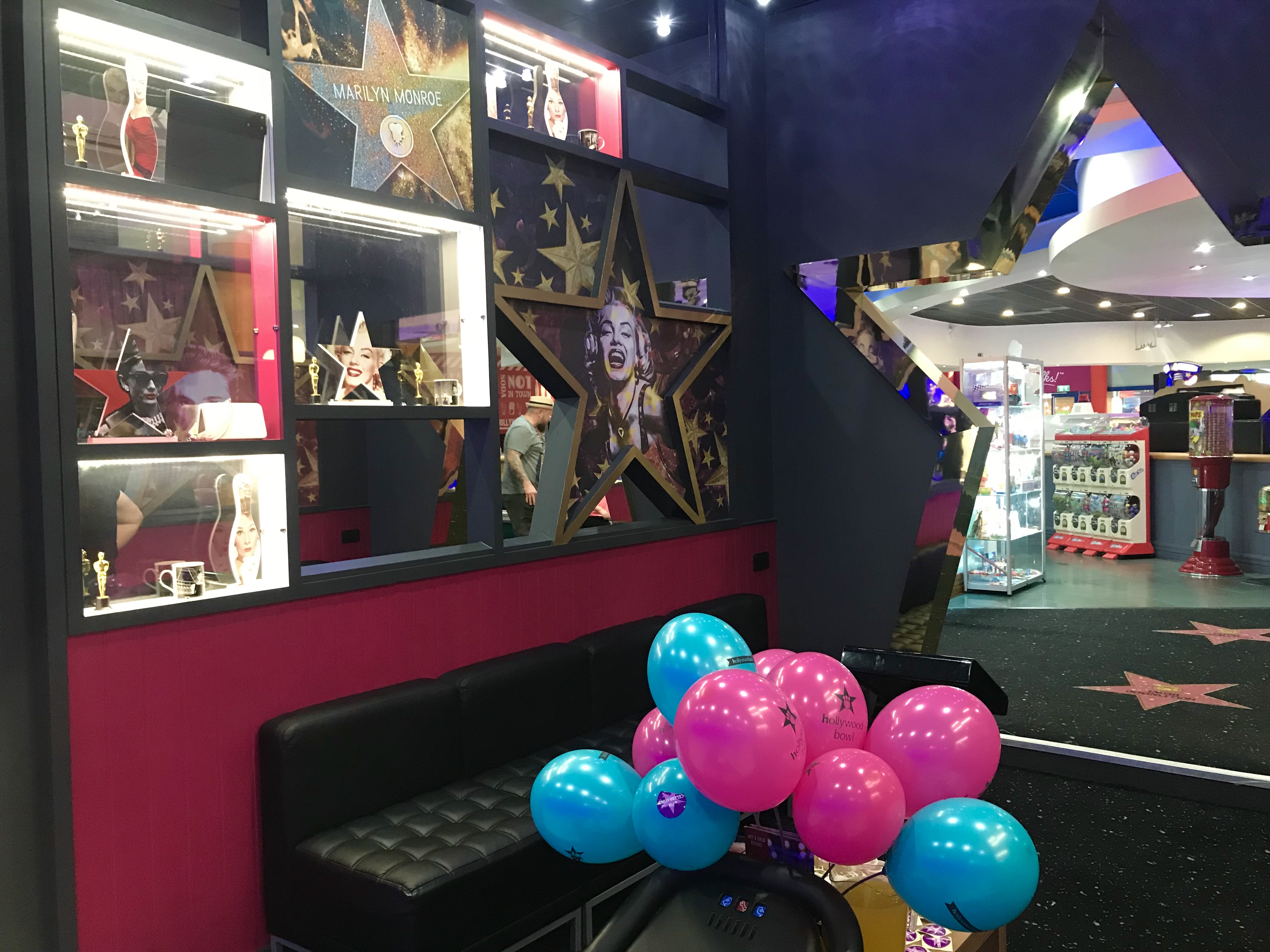 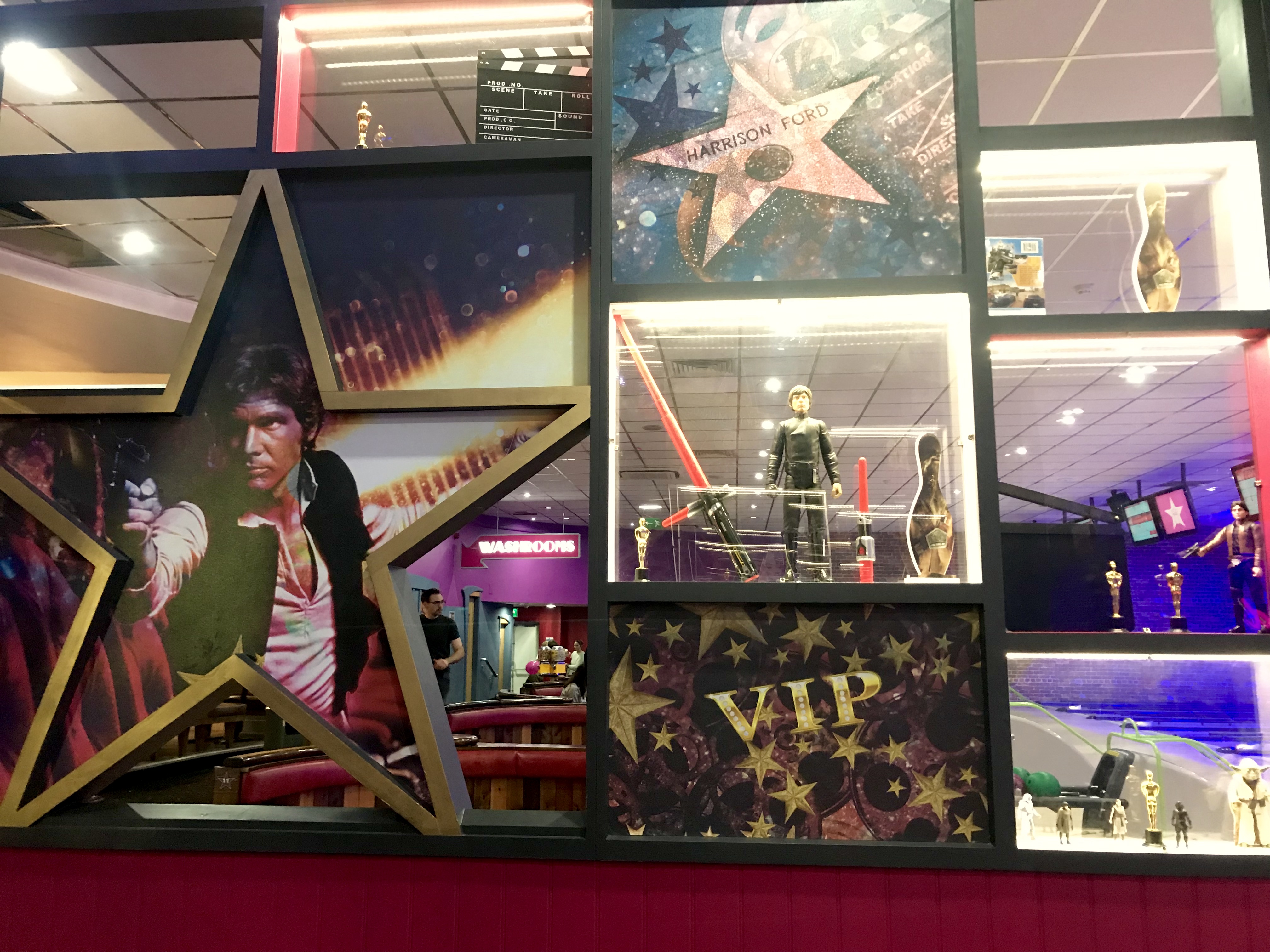 The lane had been decorated with balloons, and each child had been left a Hollywood Bowl wrist band and stickers. Our party package gave us unlimited squash on the lane, which was great as it meant we didn’t need to buy extra drinks for the guests. I questioned the fact we’d been left plastic disposable cups, and Hannah said that usually these would be reusable plastic cups but with eight parties taking place that day, sadly they’d run out of the reusable ones. I would also question from an environmental point of view whether all the stickers and bands were needed, but the children certainly seemed to enjoy them. 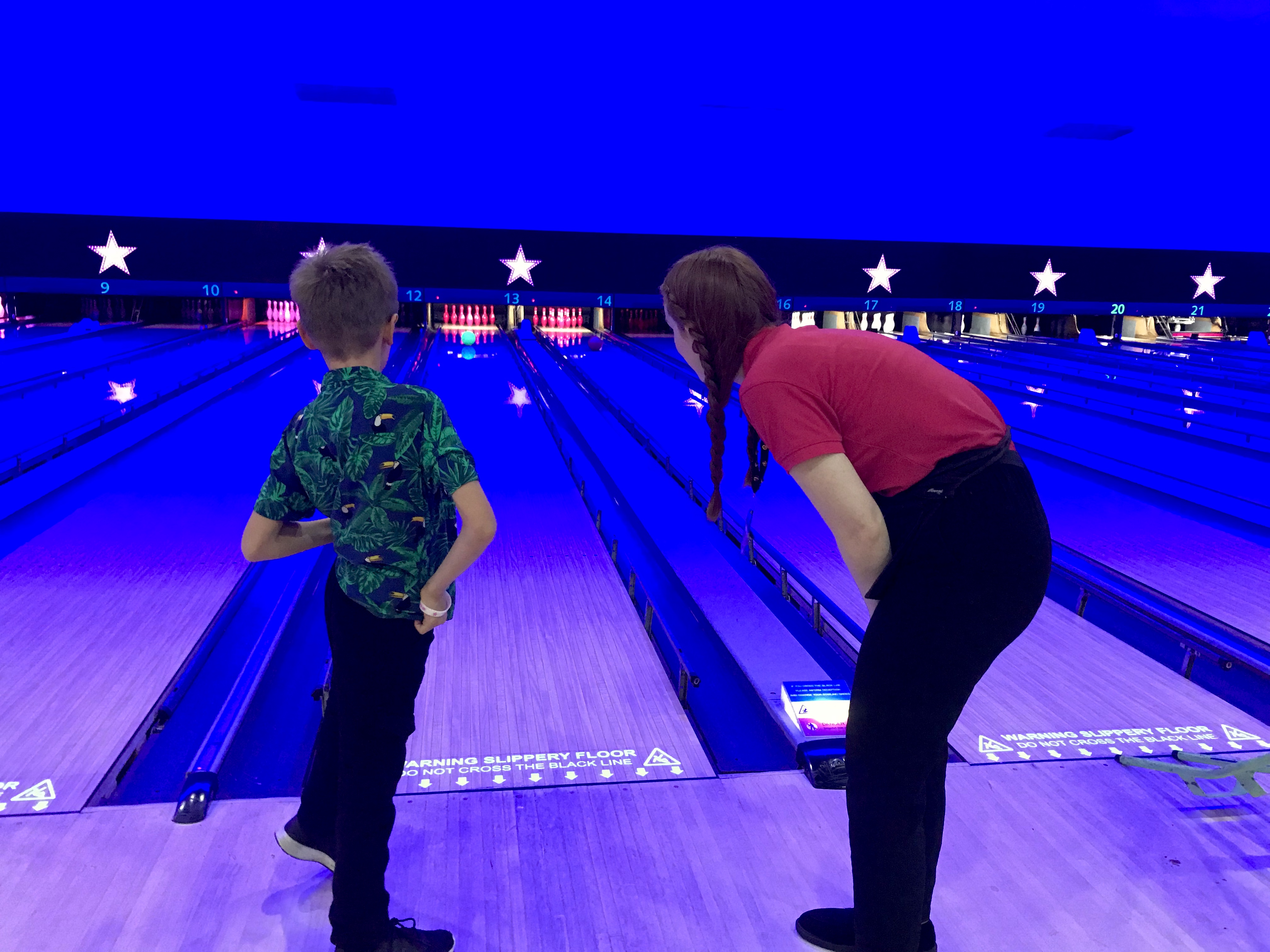 The lanes can host up to six people – we had five children in each lane. Some of them had never bowled before, others had been previously, but they were all so supportive of each other, cheering them on and doing celebration dances when someone did particularly well. Each player gets 10 turns to bowl, with each turn consisting of two balls. It took just over an hour. We had a few strikes (when all 10 pins are knocked down with one ball), a few spares (when all pins are knocked down by two balls), and also a few misses, but thankfully no tears or upsets. They could see their scores progressing on the screens above the lanes and it was great seeing them work out who had the most, what number they needed to catch up with their friends and so on. 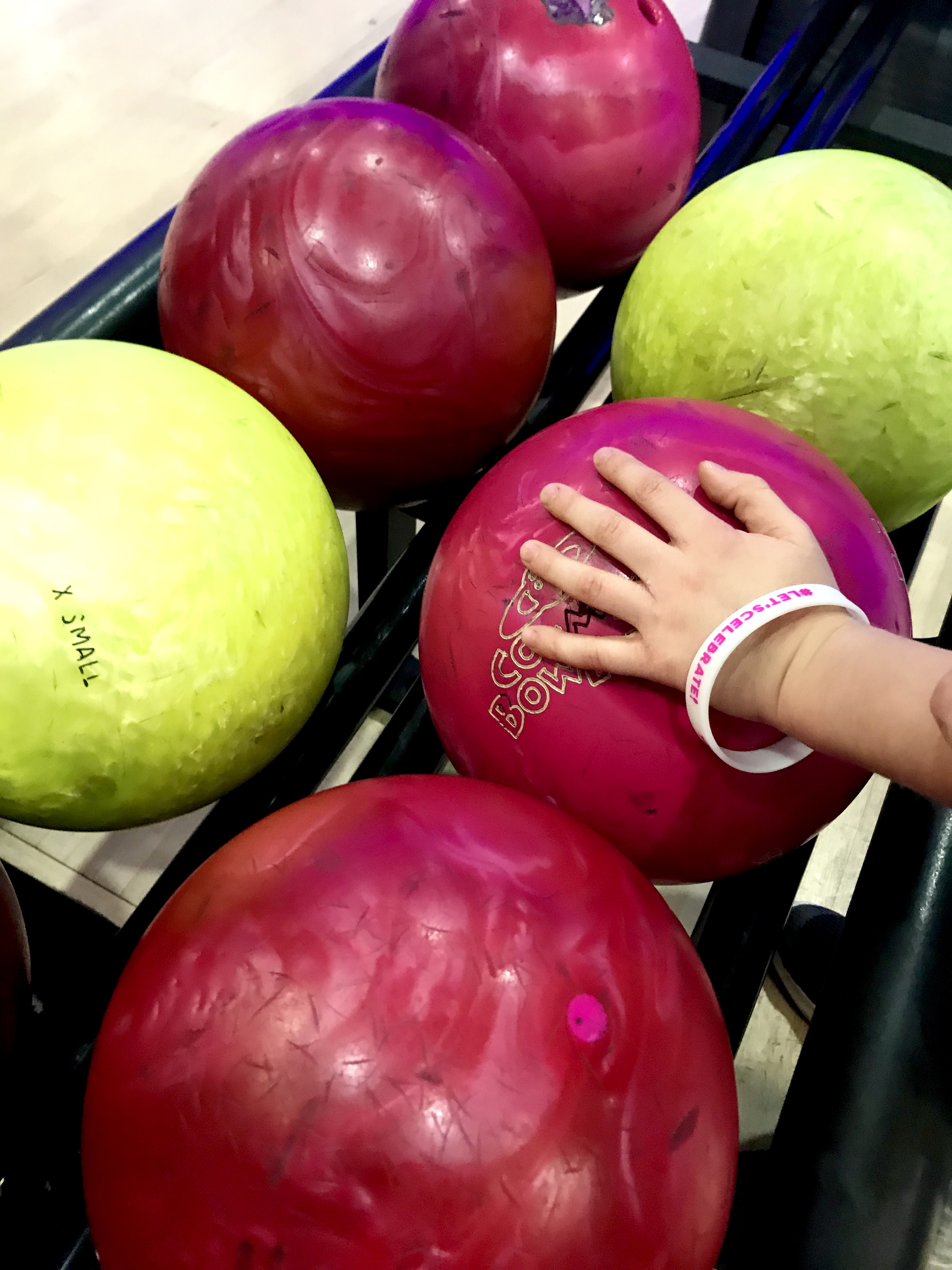 Some of the children were happy to bowl free-handed. Hannah had ensured we had a good supply of the smaller balls. Some of them needed adult help to carry them, but most were fine. Others used the ramp to push the balls down, which made it much easier for them.

They were all really good at waiting for their own turn and knowing who was coming after them – I think having our own enclosed VIP area helped here because they were less likely to be distracted by what was happening in the rest of the centre.

The winner of each lane was given a prize of a small bag of sweets.

As I mentioned, we were one of eight birthday parties taking place that day, not to mention all the other regular bowlers. But you would never have guessed how busy it was from the restaurant as it was really clean and tidy, and our table was set up ready to go with colouring sheets and pencils, and a balloon display on the table. Hannah had found an old birthday badge left behind by a previous party and left it at the table for my son to wear. 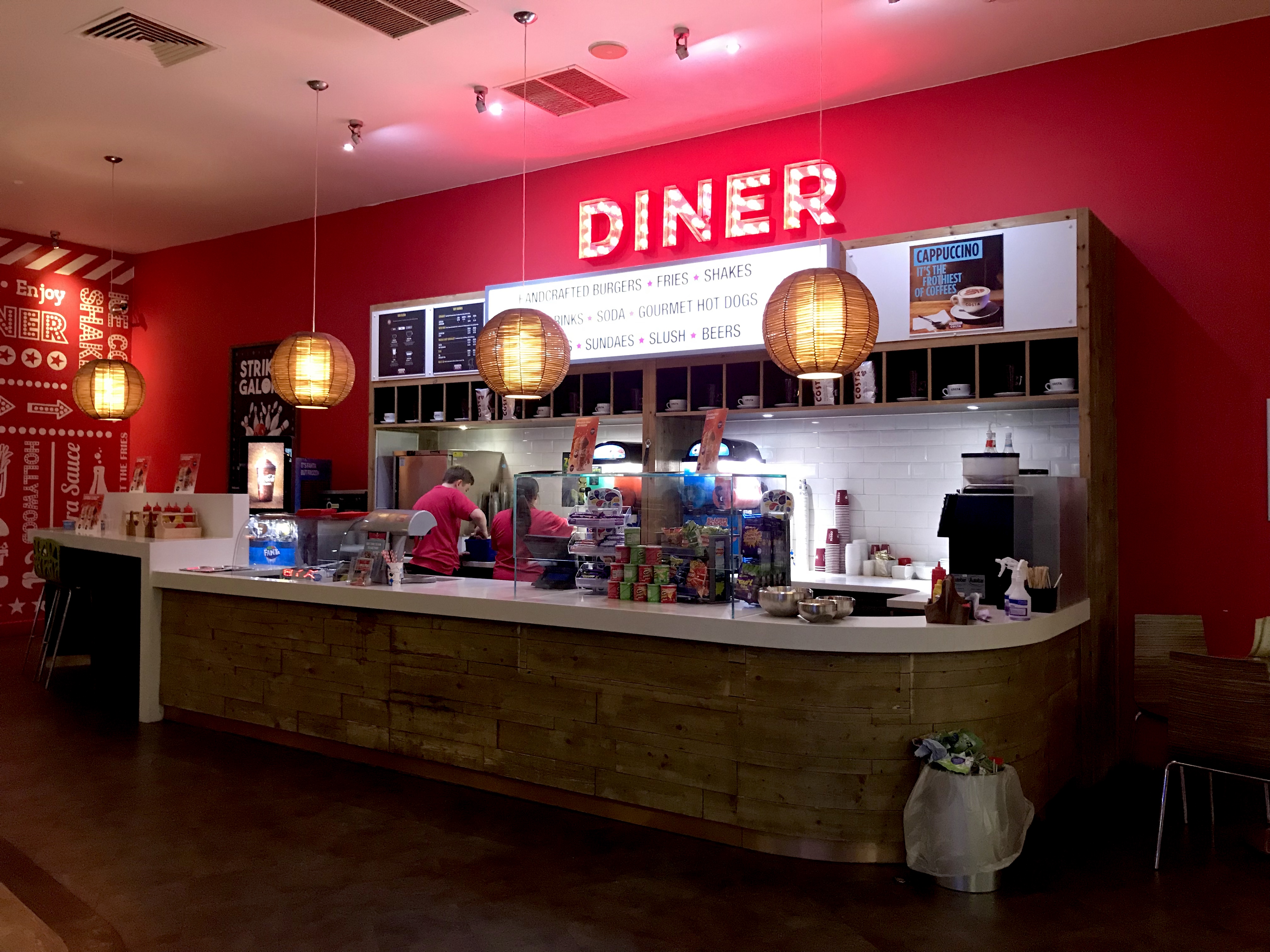 The food is typical fast food, with options including burgers, hot dogs, chicken nuggets, veggie burgers, all served with fries, and pasta bolognaise or veggie tomato pasta. All meals are served with sticks of cucumber, carrot and pepper.

One of my son’s friends has coeliac disease so needs to follow a gluten-free diet. Hannah was great at running through the allergens menu with him and ensuring him that his meal would be cooked separately and served first to avoid cross-contamination (he is very sensitive to this), and the surfaces and equipment would be deep cleaned before the food was prepared. Sadly there was no gluten free chicken nugget or pasta option but he was able to have either the burger or hot dog, served without the roll but with extra chips.

Another of my son’s friends is Muslim – his mum had suggested he choose one of the vegetarian options, but there were actually halal options available so he had the choice of halal chicken nuggets or a halal burger. 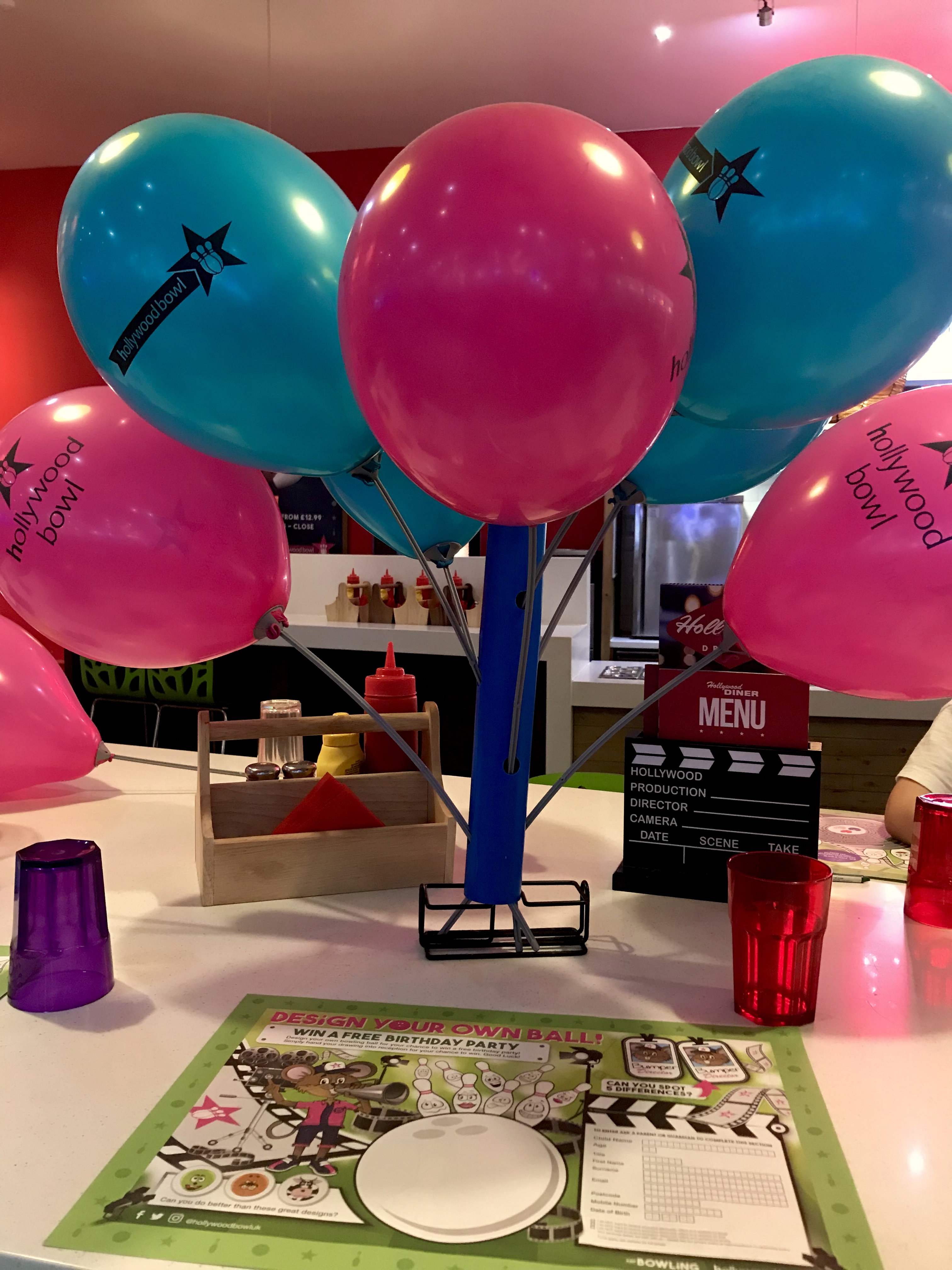 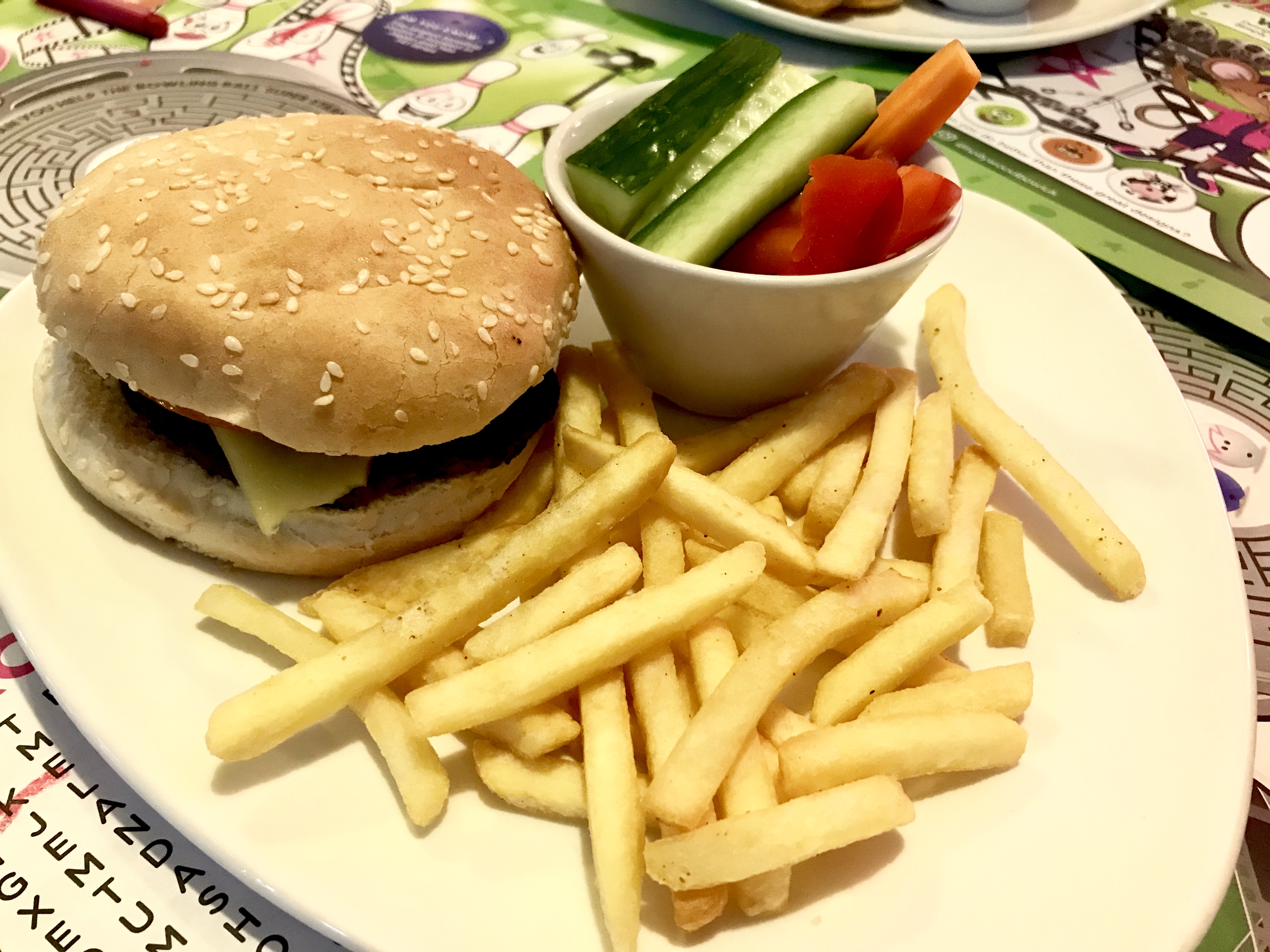 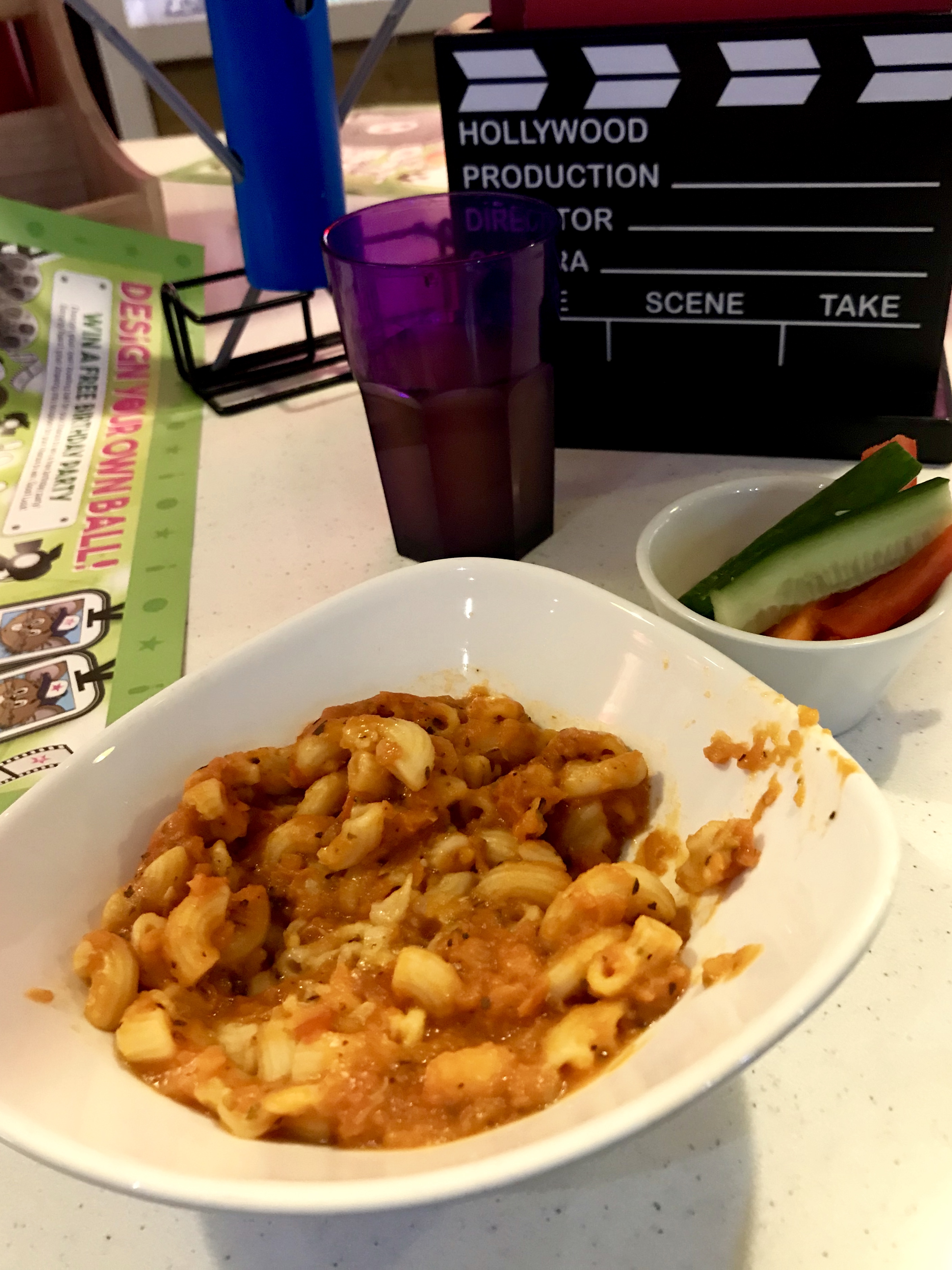 As the food had been pre-ordered at the start of the party, it came out pretty quickly after we’d finished bowling and the portions were generous.

After the main meals, it was time for ice cream. The children got to head up to the counter and choose from chocolate, vanilla and strawberry ice cream (or even all three), topped with a choice of sauces, sprinkles, and a wafer biscuit. They loved being able to choose their own combinations and the sundae bowls they were served in looked great. 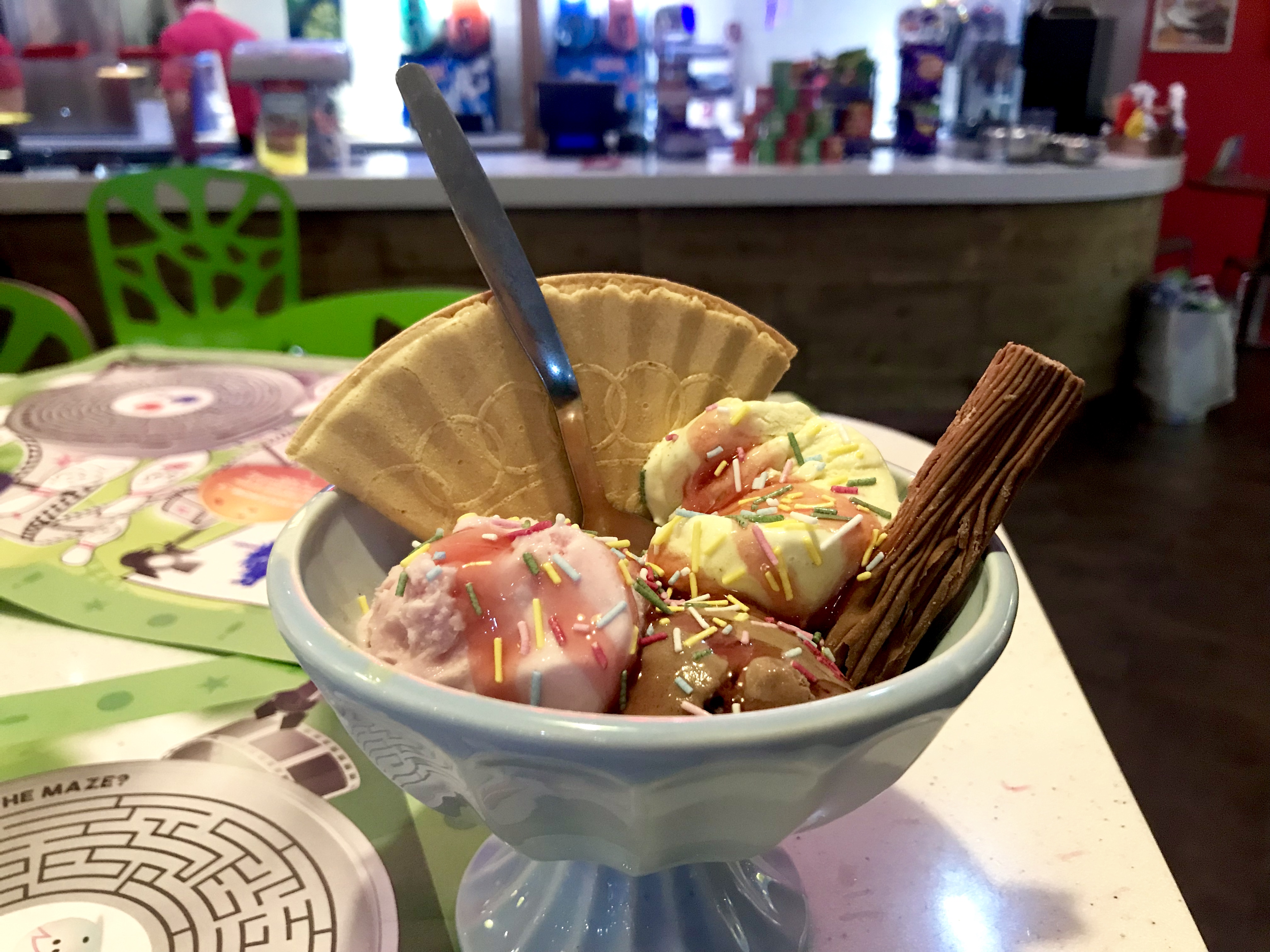 It was then time for birthday cake. We’d given this to Hannah at the start of the party, along with candles, and so she brought this out from the kitchen for everyone to sing happy birthday.

Hannah then took the cake back to slice up and wrap ready for the guests to take home. This was really helpful because parents were starting to arrive and it meant I could talk to them rather than having to cut up cake.

As part of the ultimate package, all the children were given a voucher for one game of bowling for one person. This was a lovely touch, especially as some of the children had never bowled before and had enjoyed it so much.

I explained the voucher to the parents as they came to collect, joking to them, “I won’t be taking them all next time though!” 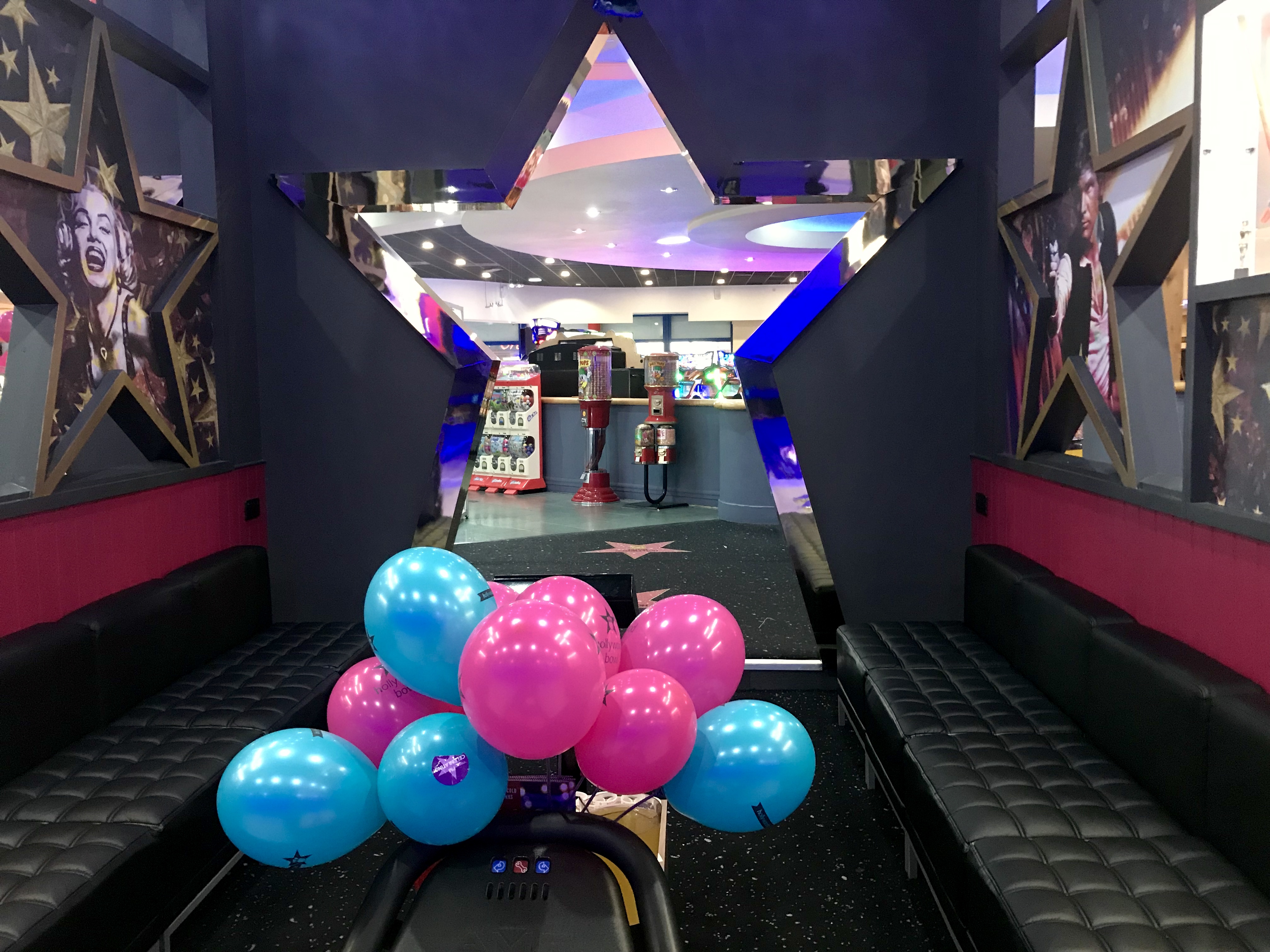 We were really impressed at how smoothly the party ran. It was effort-free for me as a parent. The only things I had to do was send the initial party invites (Hollywood Bowl can supply these if you wish but wanting to reduce paper I invited everyone by text instead), bring along a cake, and small party favours for the children. Having Hannah on hand as party host was a massive help too. The VIP lanes added to the experience, making it feel like a real birthday treat.

For more information on birthday parties at Hollywood Bowl Cardiff visit the website or call them on 0844 826 1456.