People are always telling me what a “real boy” my middle child is. Little Man O is now 3¾ and likes cars and superheroes, toy knights and castles, dinosaurs and spacemen, climbing and kicking balls about. Random strangers are forever saying things like “oooh, he’s such a boy” to me.

And yes, he does enjoy all the activities we traditionally associate with boys.

Recently, however, Little Man has been wearing a silver star-shaped ring and a beaded necklace. A couple of times he’s ventured out with two clips in his hair. People we don’t know, and even people we do, keep commenting on it. “Are you wearing a necklace?” they’ll laugh. “They’re for girls.” Or they’ll ask him, “Why are you wearing your sister’s jewellery?”

He often looks at me unsure of what to say; I can see my usually confident boy is worried and upset. I always respond by saying that they’re not just for girls, they’re for whoever wants to wear them and that as it happens I’m really proud of Little Man as he made the necklace himself by diligently threading beads onto an elasticated string. Personally, I think threading beads onto a string is a brilliant achievement for a child of his age. It’s a great way to encourage a host of skills, including hand-eye coordination, concentration and dexterity.

But more than that: it’s fun and something he enjoyed doing, which is the most important thing as far as I’m concerned. Why shouldn’t he be proud to wear something he made himself? He’s just as proud of a papier mache fish he spent hours making, and which has pride of place hanging from his bedroom ceiling. 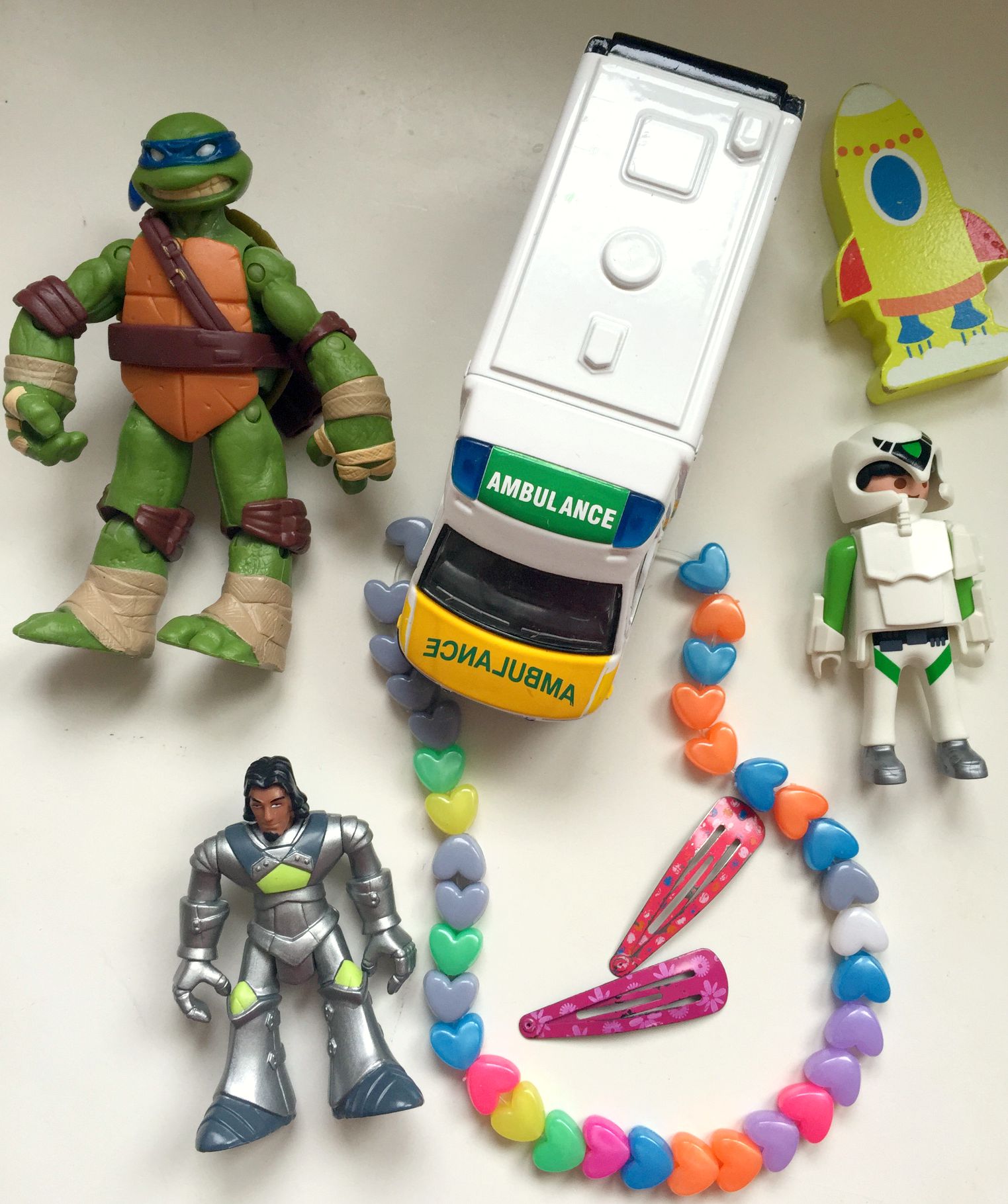 I don’t mind the people who ask in a kind, curious and non-judgemental way, but many of the comments are quite rude and unthoughtful. They say “it’s for girls” in the same sneering manner of voice you might use if you stood in dog crap or something.

Some of my other mum friends have experienced similar when their sons have worn “girls’” clothes and accessories.

One tells me, “My son – who is almost two – wears his sister’s bright pink Frozen cap and Hello Kitty handbag. He has insisted on wearing it on the school run several times. I’ve had a few people say ‘don’t worry he will grow out of it’. I’m not even remotely bothered if he doesn’t but I’m certainly not stopping him wearing it.”

Another mum friend says, “My two-year-old son was sporting mini bunches all of last week and regularly dresses up in a princess dress. He has also tried hair clips, etc. The other week someone told him boys don’t wear dresses. He didn’t seem to take it in but his big sister did. I was so proud when she said ‘But he likes wearing it, and so if he likes it and finds it fun then he can’. The same person has seen her dressed as a fire fighter and yet didn’t comment negatively about that.

“I could rant all day about gender stereotypes,” she continues. “Let children be children. Let them copy Mummy, Daddy, older sibling, Granddad, Nanna, a TV character, whoever. Let them enjoy their innocence, curiosity and sense of fun, with no labels and boxes for their roles in life, for as long as we can!”

I completely agree with her. I’ve already written on my blog about how I took Tesco to task for selling Halloween costumes that were labelled by gender. “Why can’t a girl dress as a skeleton?” I asked them via social media. Fancy dress is about imagination, not gender. And I love the Let Toys Be Toys campaign, which has seen a lot of major retailers stop branding toys as for girls or for boys.

Interestingly, the two friends above and I all had a daughter first and a boy second. I have another friend who had a boy first and then a girl. Her daughter often wears superhero costumes in exactly the same way as these three boys wear their sister’s accessories and dressing up clothes. As far as I know, her daughter has never had any negative comments. In fact, most people say how brilliant it is that she is shunning the princess stereotypes for the kick-ass superheroes.

It’s natural for children to learn by copying. Little Man was off and away on his big sister’s scooter as soon as he could walk. He started playing with her Lego Duplo at a much earlier age than she did no doubt because he was watching how much fun she was having with it and wanted to join in. He had a toy buggy (admittedly he chose blue) when he was not quite two because he played with his sister’s so much and it was causing rows between them. Baby Boy I, their 16 month old younger brother, is also now starting to copy them. Sometimes he wants to play with Little Man’s trains, other times his sister’s My Little Ponies. He adores his big brother and sister, and I’m certainly not going to spoil his fun by only letting him play with what some people view as boys’ toys. He doesn’t even know such concepts exist.

A couple of weeks ago Little Man went through a stage of wearing several orange clothes pegs clipped on to the bottom of his t-shirt – “so that everyone will know that orange is my favourite colour”. I tried to tell him that people don’t usually wear pegs attached to their clothes, but he insisted on wearing them, and so I let him, and soon enough the stage passed. Miss E recently made herself a hair band out of some gift ribbon and a giant gift bow. She was so proud of it and again, insisted on wearing it out and about. In both instances, people’s responses were that it was sweet and endearing, despite her looking like a giant birthday present, and him like he’d been plucked straight off a washing line.

So why is it so different when it comes to a “girlie things” on a boy, such as a beaded necklace and a silver ring? Children learn by imitating, by copying, by trial and error. Why is going out with several clothes pegs clipped onto you sweet, but wearing a hand-made necklace a mockable offence?

I want my children to be confident in their decisions. I want them to be able to express their personalities and to experiment with different ideas. I want them to learn from their actions and make their own mistakes.

With Miss E about to start in year one, and Little Man in pre-school, they are already coming home with talk of certain games being “just for boys” or “just for girls”. I know I’ll hear more of this as they get older and it makes me really sad that they might shun certain things they enjoy just because they think it’s not for their gender.

Childhood is so short and precious as it is; am I so wrong for wanting it to last a little longer?

What do you think about gender stereotypes when it comes to toys and accessories? What would you have said to negative comments about your child wearing something meant for the opposite gender? I’d love to know your thoughts in the comments below, on the Cardiff Mummy Says Facebook page or you can tweet me on @cardiffmummy

Homepage » Family life » So what if my son is wearing hair clips and a necklace?

9 Comments to So what if my son is wearing hair clips and a necklace?