What a scorching few days it’s been! I’m sure my children aren’t the only ones struggling with the heat…. so what better place to cool off than Lido Ponty, the National Lido of Wales in Pontypridd? We went along on Saturday afternoon as part of some work we are doing with Visit Rhondda Cynon Taf over the summer, promoting the fantastic family-friendly attractions in the county.

Cardiff Daddy and I had worried that it would be a nightmare taking three kids to an outdoor pool on such a hot day. I had visions of the place being overrun and not being able to keep track of my kids. But our worries were completely unfounded. Our 2.30pm session was full – but as numbers are capped at 300 it never felt overly busy. It was a lovely chilled out afternoon splashing about in the water. We had so much fun and it definitely didn’t feel like there were 300 people. (There were; I asked four separate members of staff to make sure the numbers were correct.) 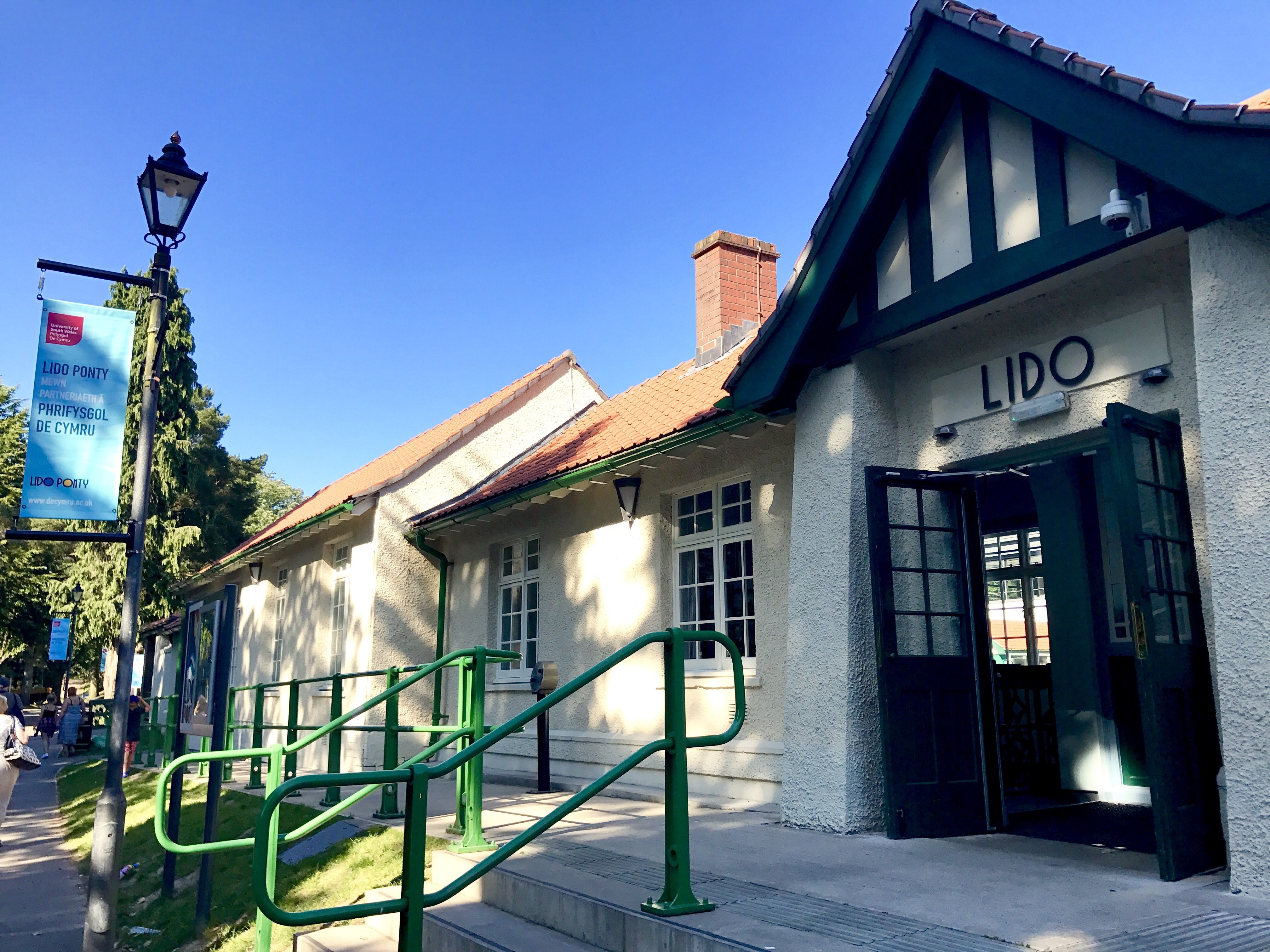 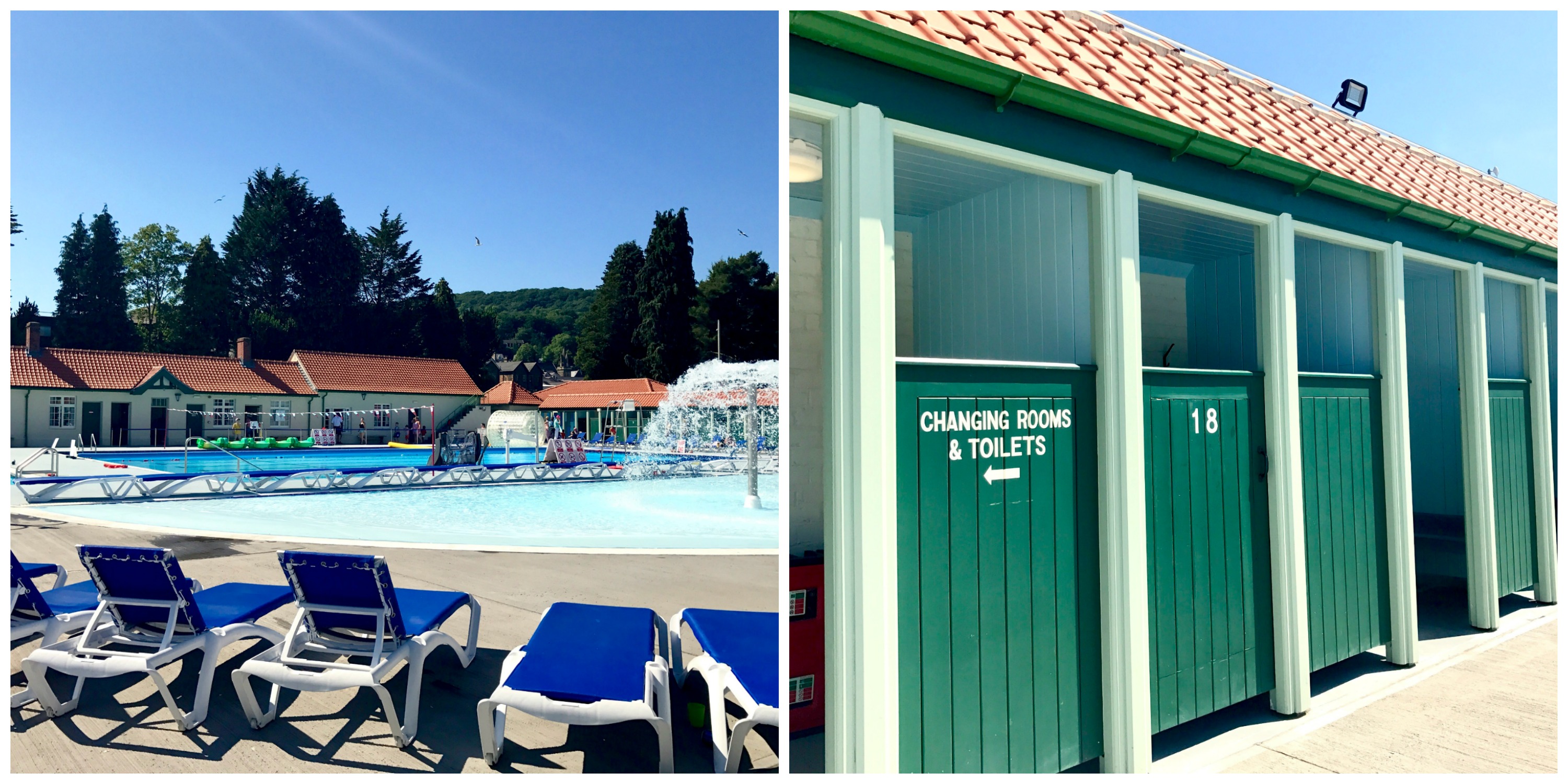 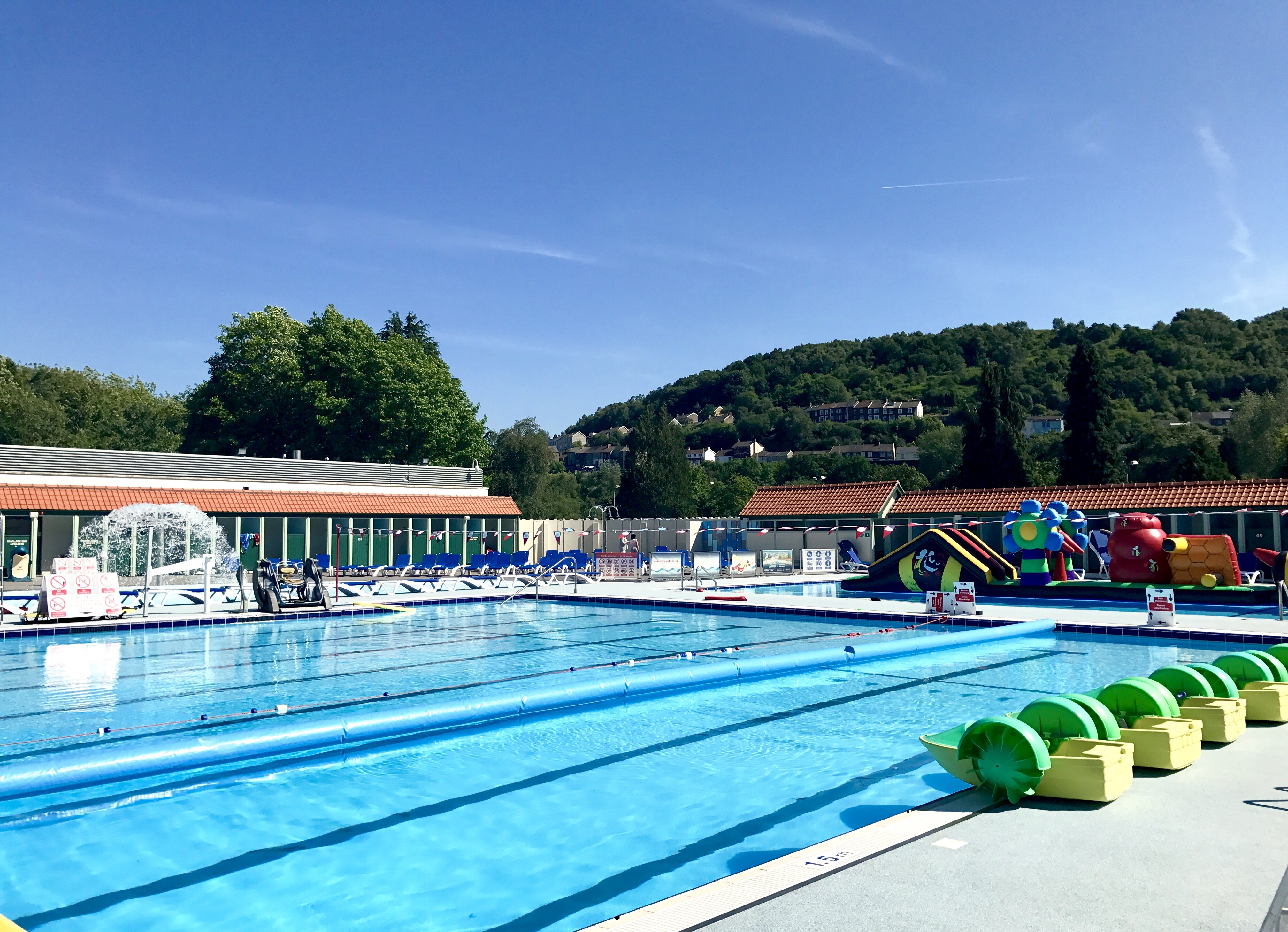 Lido Ponty, as it’s affectionately known, sits in Ynys Angharad War Memorial Park, or Ponty Park as most of us call it. The Lido was originally built in 1927 and used to be the second biggest lido in Wales behind the pool at Cold Knap Barry (which incidentally was a big part of my life growing up and it’s such as shame it’s no longer there).

The Grade II listed building fell derelict in 1991 but in 2014, Rhondda Cynon Taf Council spearheaded a £6.3m restoration project, with financial support from the European Regional Development Fund through the Welsh Government, Heritage Lottery Fund and Cadw. It’s re-opened in August 2015 and is Wales’s national lido, the only one of its kind here. The visitor centre above the cafe charts its history from 1927 until present day. 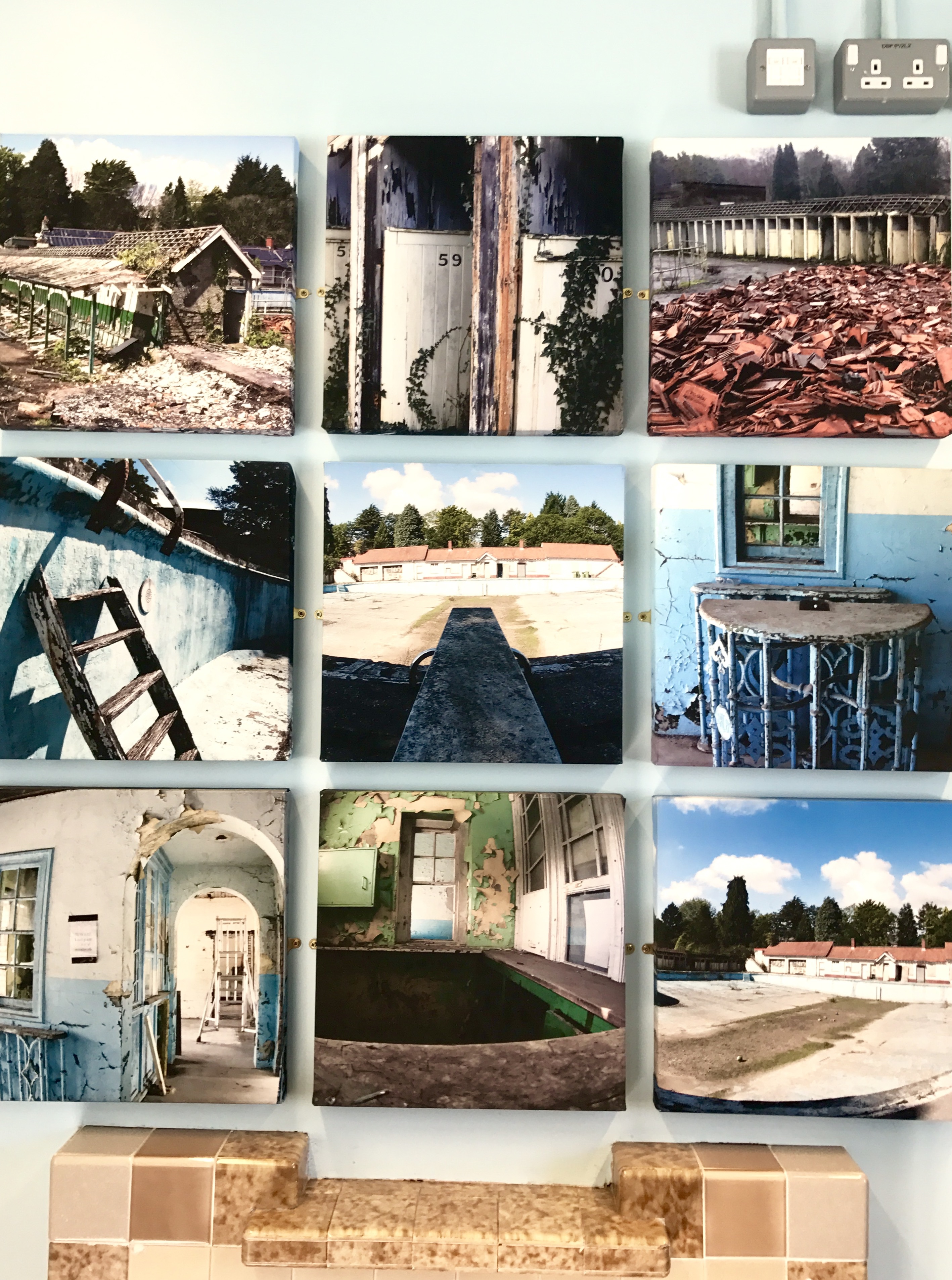 There’s no parking on site, so we headed to nearby Goods Yard car park, around a 10 minute walk away and costing £2.60 for the day. Gas Road car park is cheaper and closer, costing £1 per day, but by the time we’d got there it was full. The Lido’s website has a full list of nearby car parks. It’s also accessible by public transport, being close to both the bus and train stations.

We got to the pool at around 2.15pm and there was already a queue forming outside. The staff were really efficient though, ticking people off and taking money for those who still needed to pay as they waited, so as soon as it hit 2.30pm we could all go straight in.

As we walked through the (original, restored) turnstiles, it honestly felt like we were on holiday abroad. The Lido has plenty of sun loungers, restored original wooden changing cubicles, outdoor (warm!) and indoor showers, and an on-site cafe.

My kids were so excited and wasted no time getting into the water. 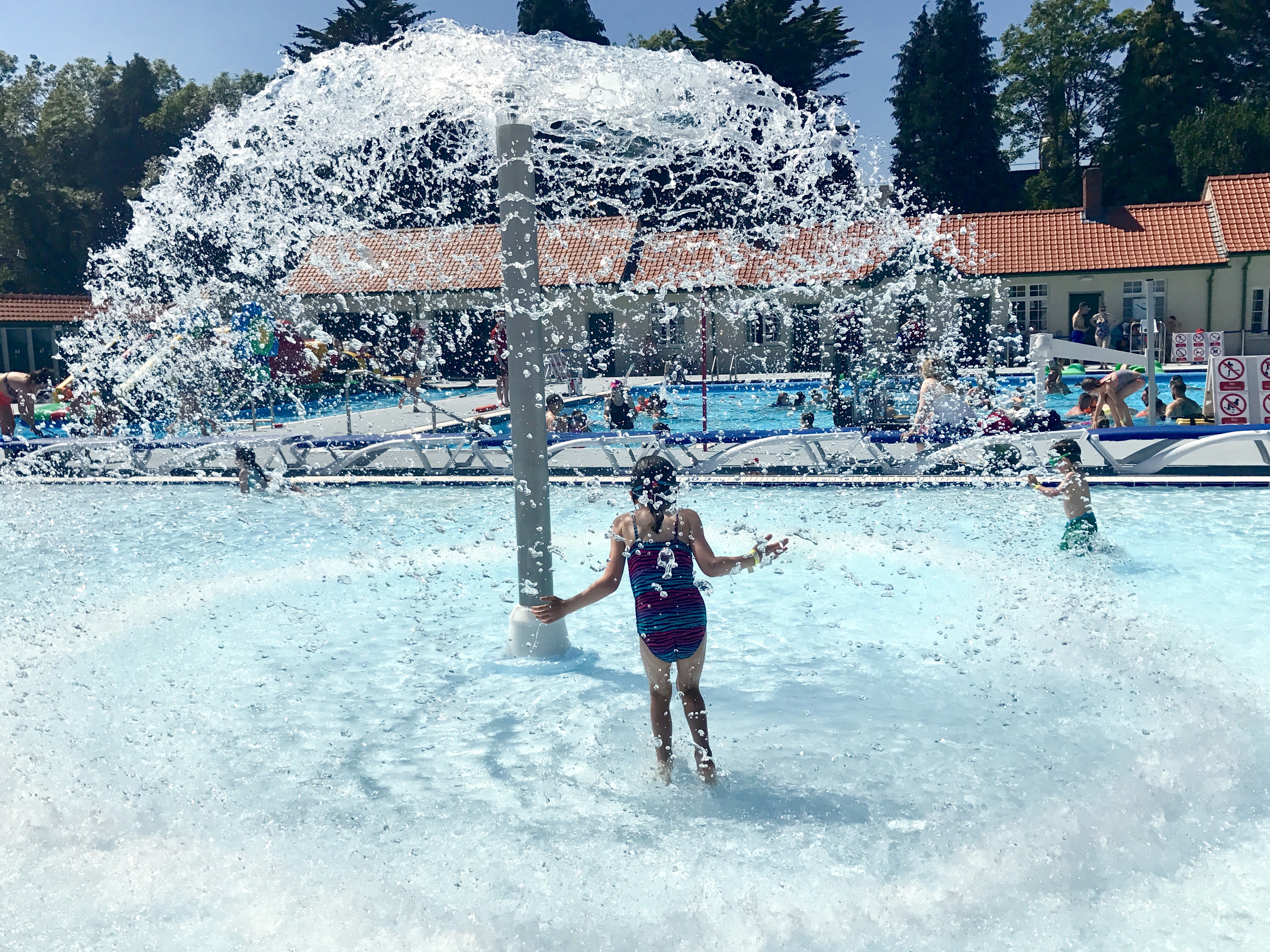 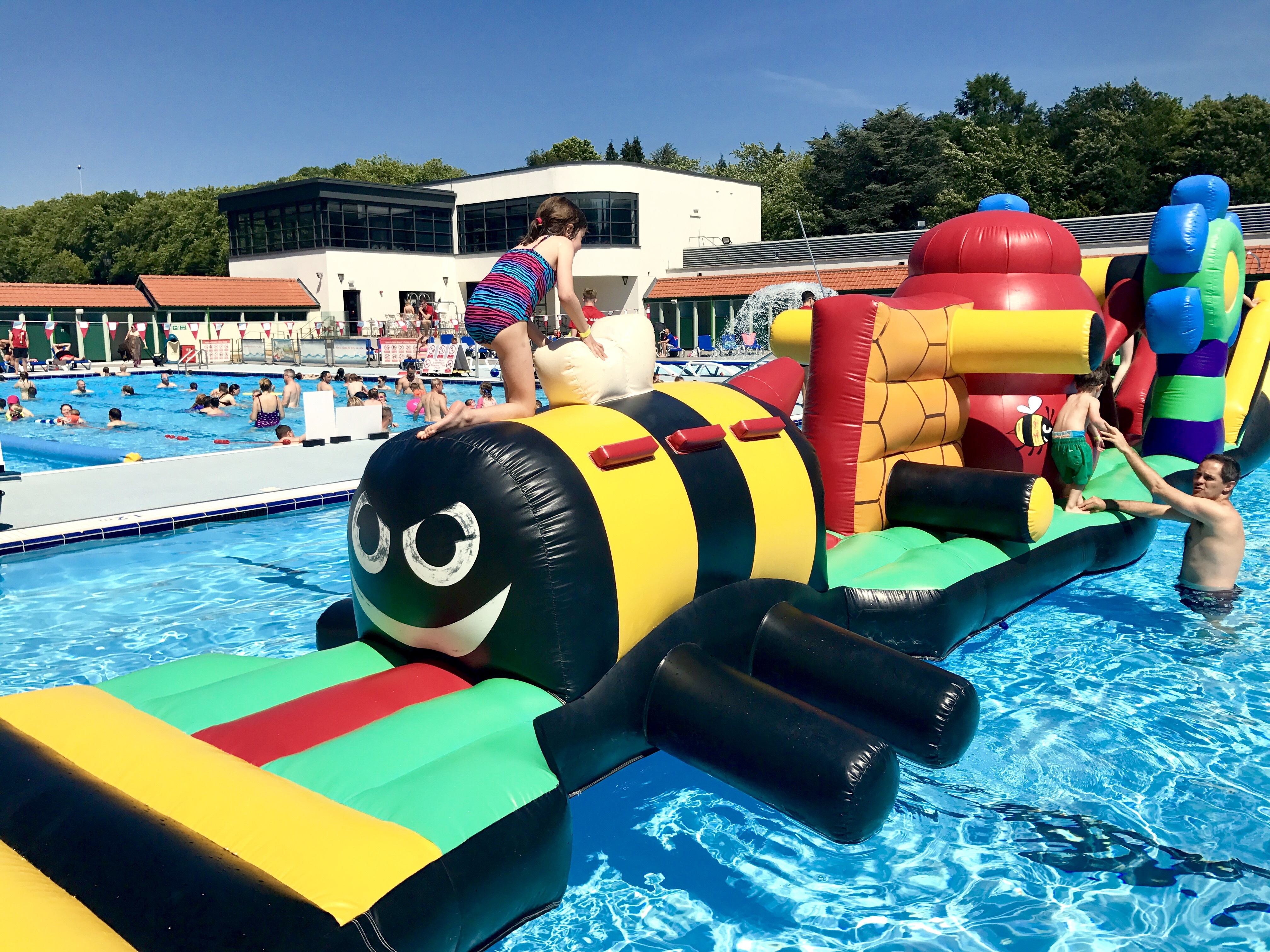 There are three pools at Lido Ponty – a shallow splash pool of around 30cm depth and with an umbrella shaped water sprinkler, which all three of my kids thought was brilliantly. Some children had buckets and water toys with them. There’s a 25m big pool, 1m at the shallow end and 2m at the deep end. When we visited, part of this was cordoned off for water activities including children’s pedal boats and an inflatable water ball which again my three loved. We had worried Toddler would be too small for the boats but adults are allowed to go in the water to help younger children navigate. Finally there’s the activity pool which had a huge inflatable obstacle course across its length. Again, Toddler needed an adult in the water to help him across but the other two were fine; all three of them went on about five times they loved it so much.

All the pools are heated, which was really lovely, and also means you could go along on a not-so-warm day. In fact, I know people who have been on grey and cloudy days, worn wetsuits and pretty much had the place to themselves. 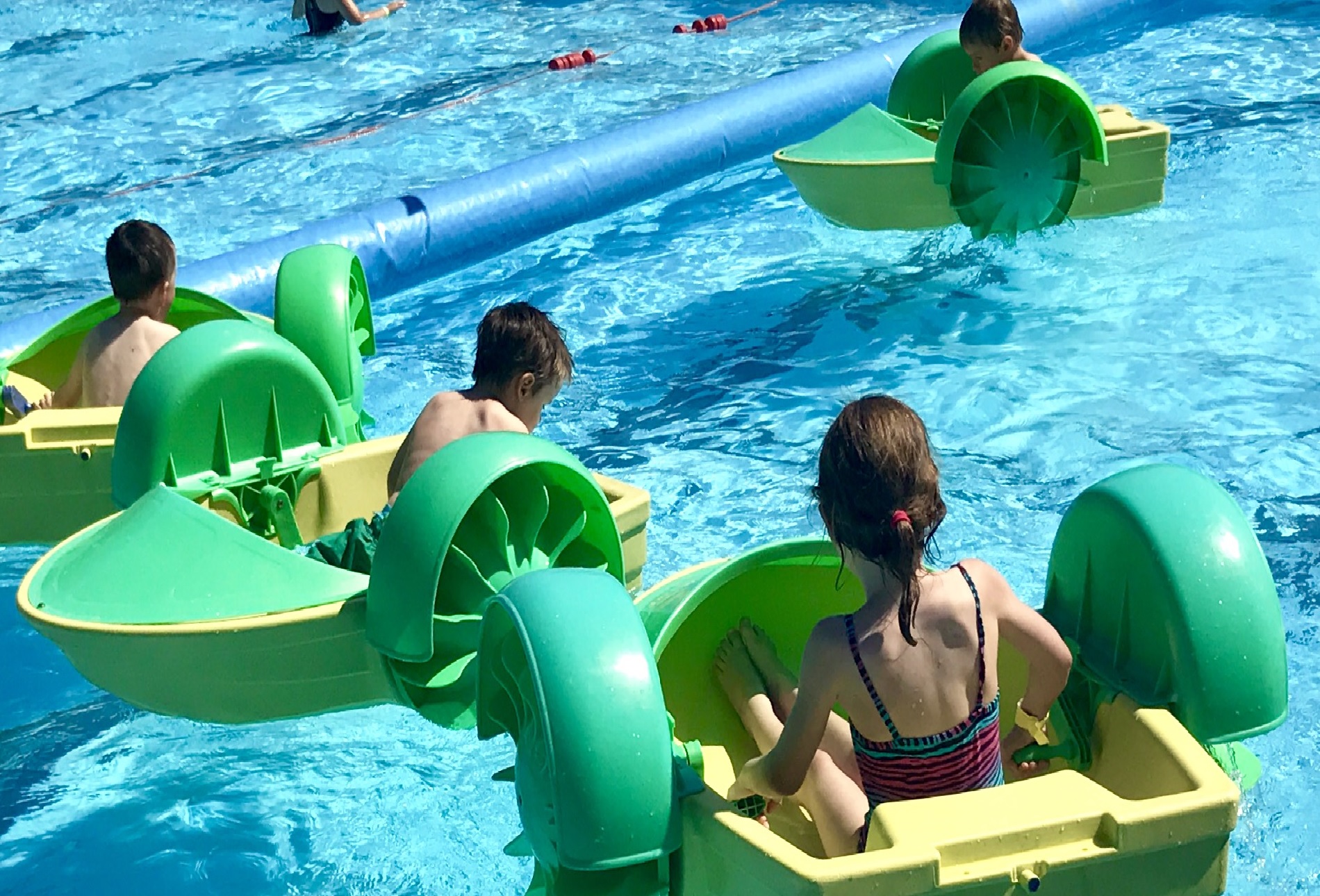 The Lido used to be free but now costs £1 for grown ups, with children still free. An activity wrist band pass for the inflatables and boats costs £2.50 per child.

There are several sessions a day, each lasting two hours, with 90 minutes in the pool and 30 minutes for swimmers to get changed while the pool area is tidied for the next session. Obviously we would have loved longer in the pool – but the timed slots are a really fair way of giving as many people as possible the chance to enjoy the pool.

Two-thirds of the tickets are available online up to seven days in advance with the rest available at the door on a first come first served basis.

Now that our children are 7, 5 and 3, it’s getting easier for us to go swimming as a family of two adults and three children. The ratios meant we couldn’t go to the Lido as a family last year. It’s one adult to one child under 5; one adult to two children aged 5-8, while children 8 to 15 need no adult supervision provided they are competent swimmers. It’ll be a couple of years before I’m able to take all three of my children there on my own! Safety is evidently important at the pool and we were really impressed with how many life guards were on duty. We counted at least 10.

After the pool we headed to Lido Play, the playground right next to the pool. It’s absolutely huge with different areas for different age groups, including climbing frames and slides, a wooden train and a zip wire. The area for smaller children is on a sandy base, so buckets and spades are a great idea.

I must admit that the park was so busy and as it is such a big play area, I would have found it quite stressful if I’d been there with three children on my own but Cardiff Daddy and I just about managed to keep tabs on the three little people. It was much quieter when we returned at around 7pm. 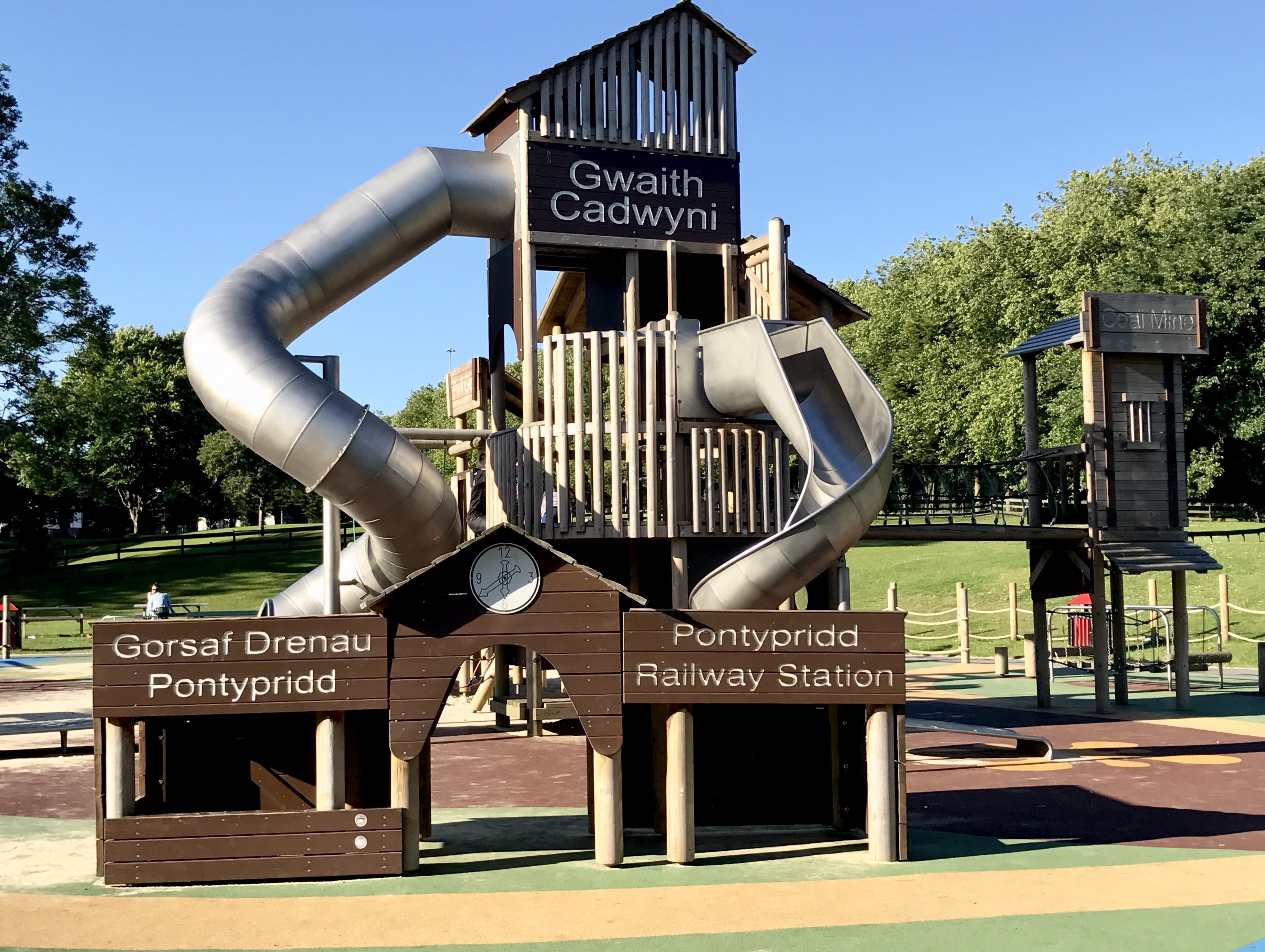 We had planned to go home for tea but the weather was so gorgeous we made a spontaneous decision to head to Tesco in Pontypridd town centre, only a 5-10 minute walk, and bought a load of sandwiches, salad and drinks. There happened to be a Beatles tribute band playing in the park’s bandstand and they were brilliant. 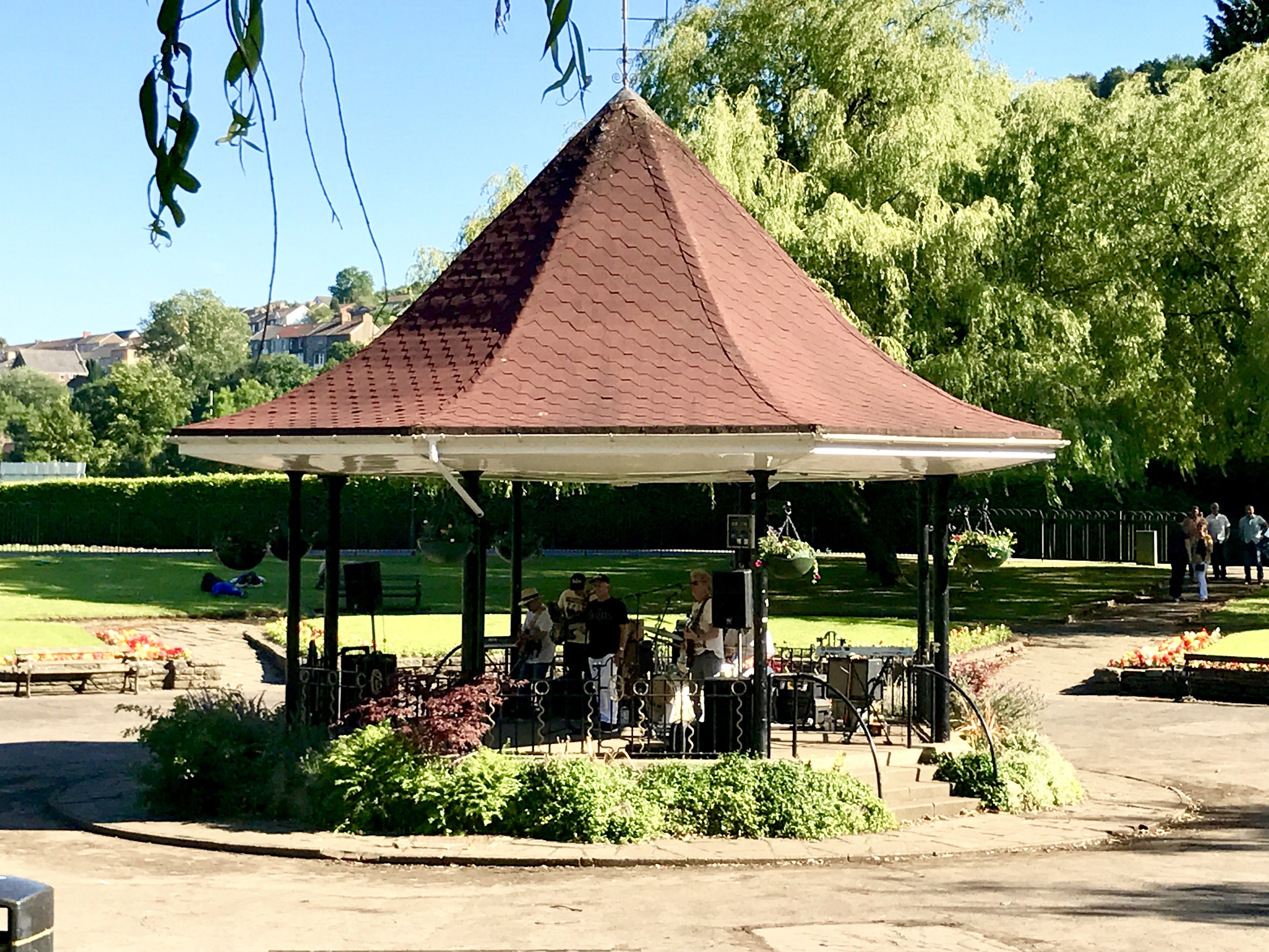 We all love The Beatles in our house so loved dancing and singing along to some of their most famous songs. The sunny weather and the pool had been brilliant enough but this really added an extra element of fun to our day, making us feel like we’d had a mini holiday.  Pure escapism for a few hours. We’ll definitely be going back!

Free music continues in Ponty Park on Saturday 24th June (South Wales Armed Forces Day) with Cheryl Roberts and Ellis Millard, and Saturday 8th July, 3-7pm with The Stoned Apes, The Stavz Band, and The Semantics, 3-7pm on both dates. 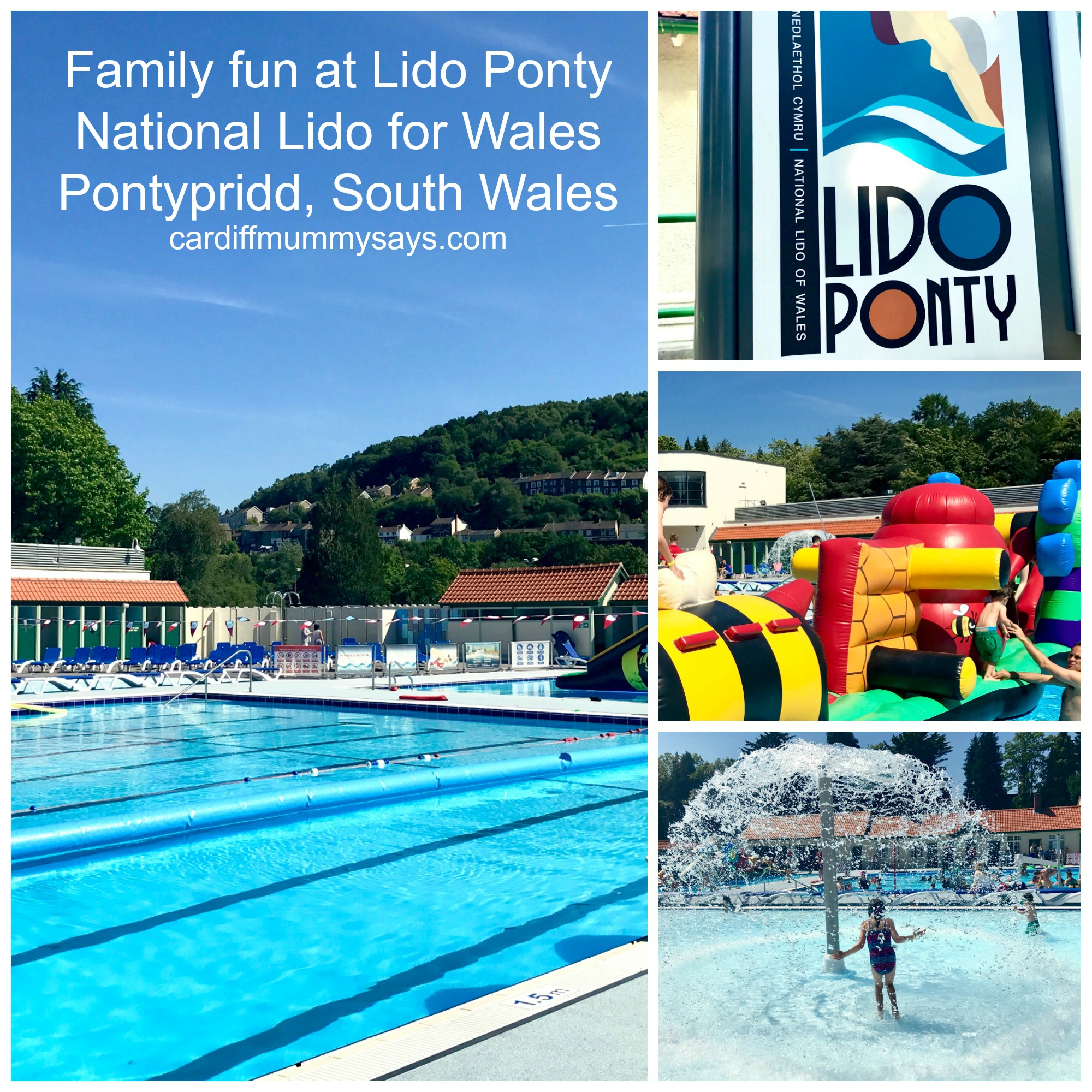