This is a photo of a little boy who wanted to help load the washing machine with his daddy’s dirty shirts.

It’s a quick and blurry snapshot I took to send to his daddy because I know how much he misses his children when he is at work. And even though this photo probably looks dull and boring to most people, this little boy’s daddy loves to hear the ins and outs of what we get up to during the day when he’s not here.

After I sent this photo, it suddenly occurred to me that it represents so much more than the simple act of loading a washing machine.

There was a time when men and boys wouldn’t go anywhere near a washing machine. Or an iron, or a vacuum cleaner, or the dirty dishes in the sink. When housework was solely women’s work, even when women were going out to work, too. I know some people still see it that way – but in this country, most of us don’t.

I feel quite strongly that this little boy, and his big sister and his little brother, mustn’t ever view housework as ‘women’s work’. My sons are just as likely to help me dust or unload the dishwasher, or pair up the socks from the tumble dryer as my daughter. Like a lot of households, my children are just as likely to see their daddy mopping the kitchen floor as me. And this little boy knows that his daddy will be ironing his shirts himself when he gets home from work.

Most people I know feel the same and our generation is definitely responsible for continuing the shift in gender stereotypes started by the generations before us. 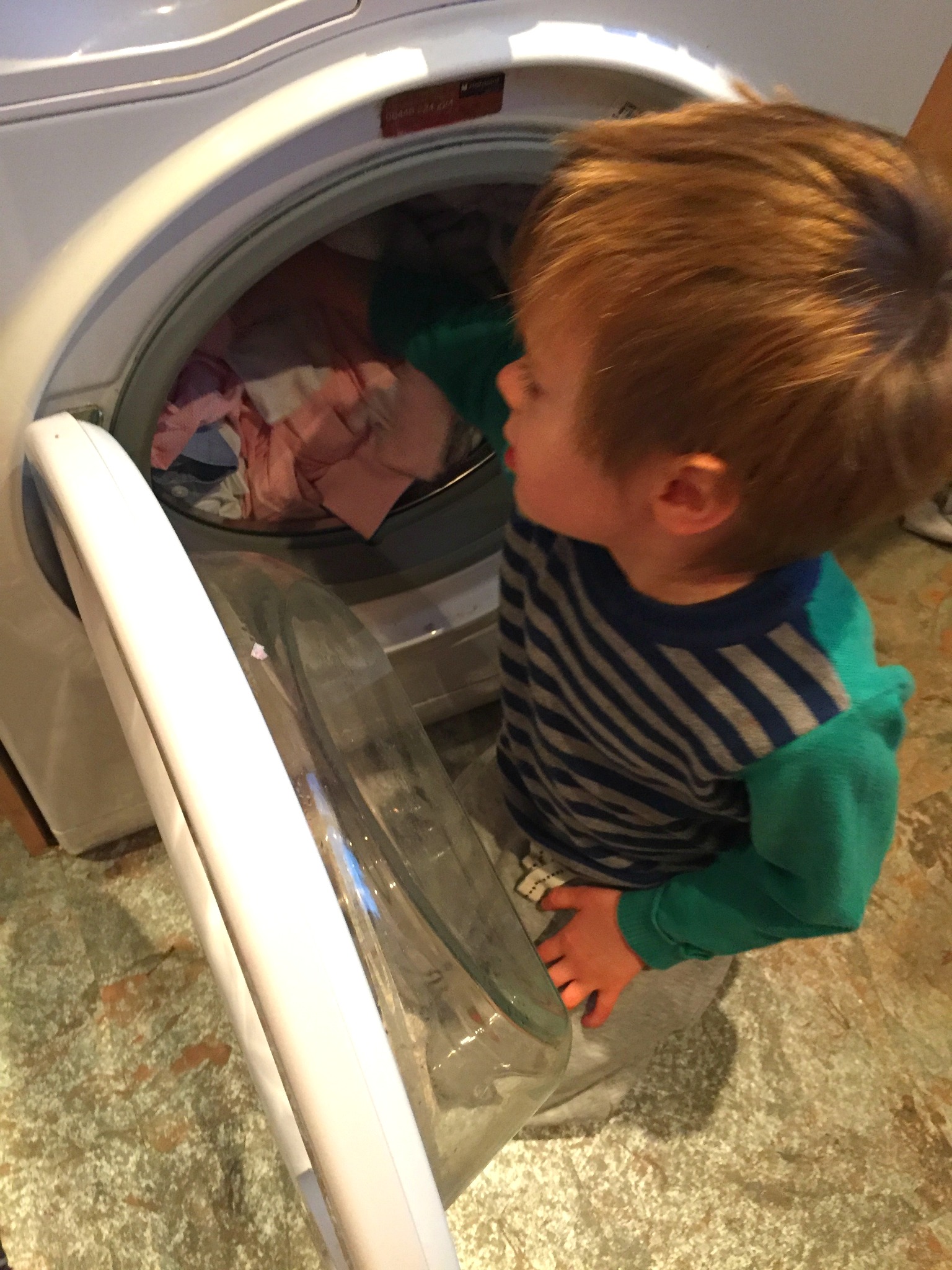 Most of the men I know are hands-on dads and more than pull their weight around the house. Yes, some need a lot of encouragement and reminding, but most men I know certainly don’t believe that it is ‘women’s work’. And it’s thanks in part to mothers and fathers making sure that all their children know how to cook, clean and do the washing, regardless of gender.

This little boy helping to load the washing machine might be a really small act, but all these little things add up and help to break down gender barriers.

Because as we all know, there are still so many barriers and injustices when it comes to gender equality. But that’s a whole other blog post, written by someone better qualified to talk about it than me.

People always tell me this little boy is ‘a real boy’ because he loves cars and trains, climbing and rugby, and superheroes. My daughter loves all of that too, as it happens. People think it’s great when she climbs a tree or kicks a football, but if we want real equality, we need to think it’s great when boys do ‘girlie’ stuff too.

This little boy is four and he doesn’t realise he’s not supposed to enjoy watching Frozen or playing with his sister’s Sylvanian Families (even if the latest game involves their boat being invaded by Playmobil pirates). He doesn’t realise he’s not supposed to enjoy stomping around the house in plastic high heel shoes because he loves the awesome clip-clop sound they make. This little boy got upset when people told him the beaded necklace he’d spent ages making was ‘for girls’. I wrote about it here. 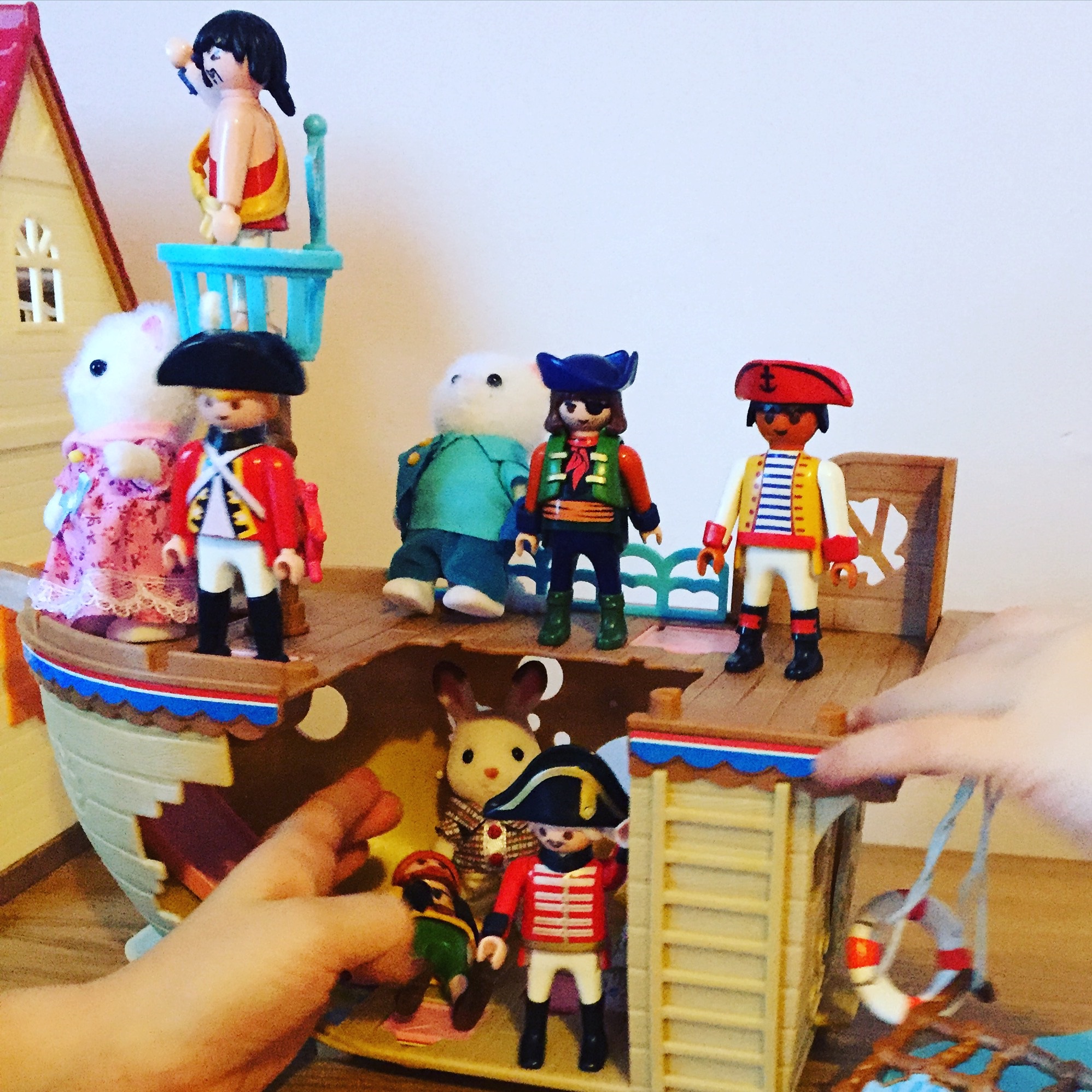 This little boy goes to preschool every afternoon and I am slowly hearing the words ‘it’s for girls’ more and more. Just like I do from this little boy’s older sister, who is now a feisty six-year-old half way through year one, but who still repeats the words other children have said to her about things that are supposedly not for her.

I’d love for my children to live in a world where there are no gender stereotypes or preconceptions about what is for girls and what is for boys. Where children are free to choose what they want to do without being told it’s for the opposite gender.

More than that. I’d love for my children to grow up to in a world where none of the big gender inequality issues – violence against women (violence against anyone really, because it’s still wrong no matter who’s inflicting it, but the statistics show women are way more likely to be the victim of violent or sexual assault than men), female genital mutilation, glass ceilings, men being paid more than women for equivalent work, and so on – exist any more. 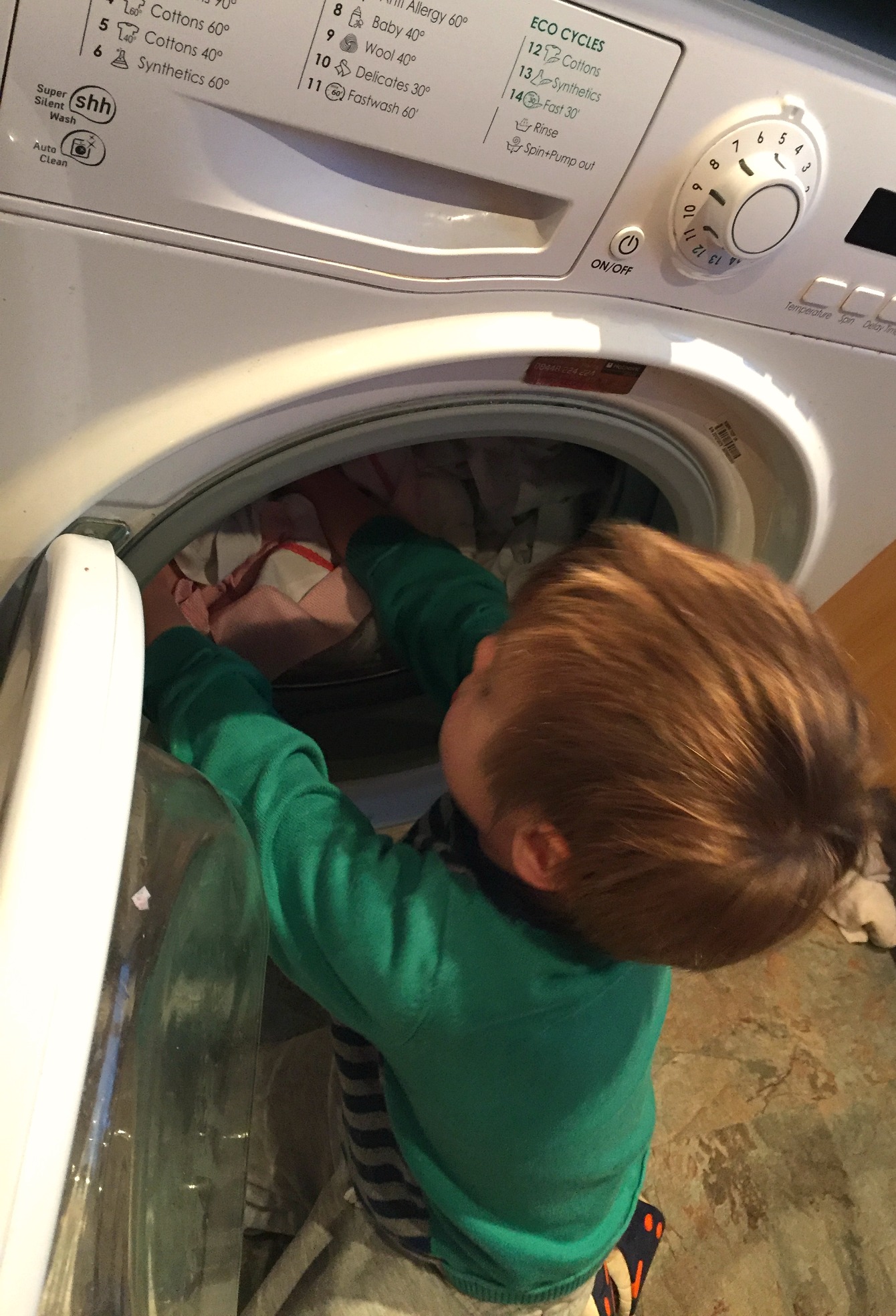 I don’t really have much power over most of that sadly. But I can show my children that men and women are equal so that if they end up married to someone of the opposite gender, they won’t presume their partner will take on specific roles. And if they’re in a position of employing a woman, it won’t ever occur to them to pay her less than a man, or to ask a female employee what her childcare arrangements are or whether she wants children, when men rarely get asked the same thing.

Like I said, when I stopped and thought about it, this photo represents more than the simple act of loading a washing machine with dirty clothes. Even though there’s still a long way to go, such little things show we are making progress when it comes to equality.

And once we’ve conquered the little things, the easy-to-conquer things, there will be more people on the same side, and perhaps it’ll make the bigger things seem more manageable. I hope so anyway.

What do you think? Do let me know in the comments section below, on the Cardiff Mummy Says Facebook page, or by tweeting me on @cardiffmummy

Homepage » Family life » This little boy and the washing machine

10 Comments to This little boy and the washing machine