dog poo in parks, why don't people pick up their dog's poo?

Does this photo offend you? Because it blinking well offended me when my 14 month old made a grab for it while in the park today. 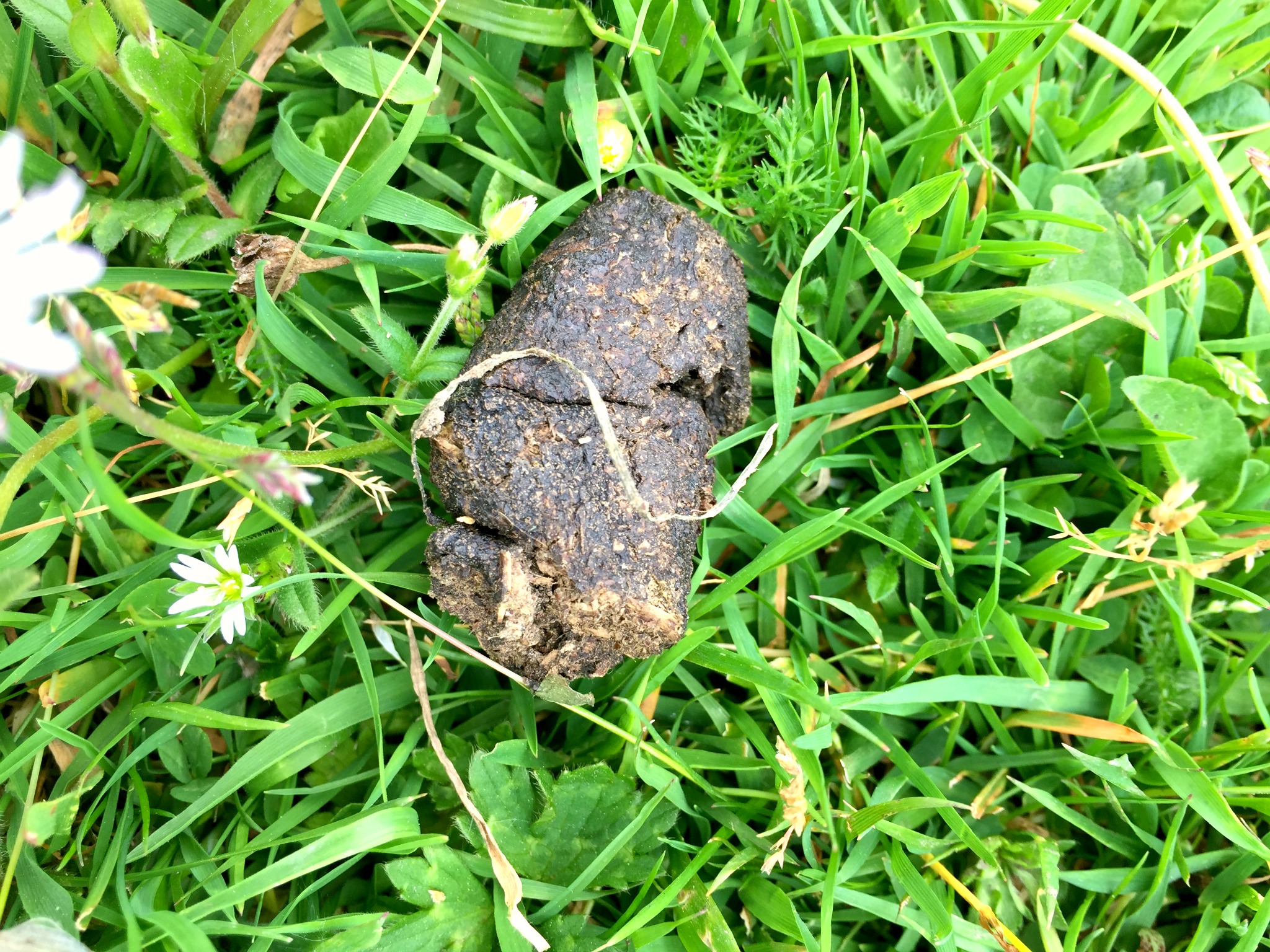 Luckily I was keeping a close eye on him as always, and noticed where his hands were headed before he could pick it up. But it made me so mad. How, in this day and age, can people think it’s okay not to pick up after their dogs when they poo in public?

Now I know the majority of dog owners are kind, responsible and conscientious people who would be as mortified as me that another dog owner could allow this to happen. And, if you happen to be such a dog owner, then please know that I do not tar you with the same brush.

I have nothing but admiration for you wonderful dog owners with your doggy poop bags, dutifully picking up your doggy’s deposits in all weathers, carrying them around with you until you find a bin that allows dog poop, or even taking it home to bin it there. And I am thankful that you care about the environment around you as much as I do. I am glad that you have taken steps so that my children won’t accidentally run through a pile of your dog’s crap in their summer sandals and then try to wipe it off with their hands. I am glad that there’s no chance I will accidentally wheel my baby’s buggy or trike through that mucky pile of poop. I’m glad that there is no chance my toddler will fall over and land in it, or try to pick it up.

Dog poo doesn’t just look horrible, and it isn’t just messy and a pain to clean up. It’s dangerous. Every gram of dog poo contains 23 million bacteria, many of which can be passed on to humans – including campylobacteriosus, salmonellosis, toxocarisis (roundworms), coccidian, cysticerosis (tapeworms), E.coli, giardia and pario. The symptoms for many of these include fever, vomiting, diarrhoea and dehydration. As dog poo disintegrates, it also pollutes fresh water supplies, meaning it can affect the eco-system and could even end up in our drinking water. In fact, according to one source, dog poo is the number three cause of water pollution.

This isn’t new information. We’ve known this stuff for decades. So why is it, that almost every time we are out in our local parks, beaches and even when walking on pavements in our neighbourhood and outside my children’s school, I see dog poo? Why is it so difficult for some people to clean up after their pets? Why do some people think it’s okay to leave their dog’s excrement in the middle of a pathway, or next to a children’s playground, or in a field that is popular for picnickers and children playing?

I understand that sometimes a dog will run off and the owner won’t be able to see where the dog has done its business. I’ve seen frustrated owners frantically looking around hedgerows desperately wanting to clean up after their dog but unable to find what they are looking for. I’ve even seen angry dog owners picking up dog poo that doesn’t belong to their pet. Very commendable of them – but they really shouldn’t have to be doing this.

I also know that foxes and other wild animals poo in public – and what a nightmare it can be for dog owners when their pets roll in the stuff. I even panicked about publishing this photo in case it was the deposits of some animal and loads of angry dog owners attacked me, as I’ve previously been verbally attacked for expressing strong opinions on my blog. But the fact is, dog poo is a persistent problem in our outdoor spaces. We spend a lot of time in our local parks, and I am constantly on poo watch, as it’s everywhere. But – unlike the droppings of foxes and wild animals – this is a problem we can do something about.

I try to teach my children that parks are for everyone. They know to slow down or stop if they are running or cycling and other people are coming in their direction. I teach them to move their playing away from child-free people relaxing in the sun, explaining they are probably hoping for peace and quiet. They know to put litter in the bin, or to take it home with us. They know not to walk on grass that has big warning signs on it, or to pick flowers other than daisies, dandelions and the like. I do my best to teach them about harmonious living and being considerate to those around us. And then we keep coming across dog crap in the park, and it makes me sad that not everyone shares the same values. 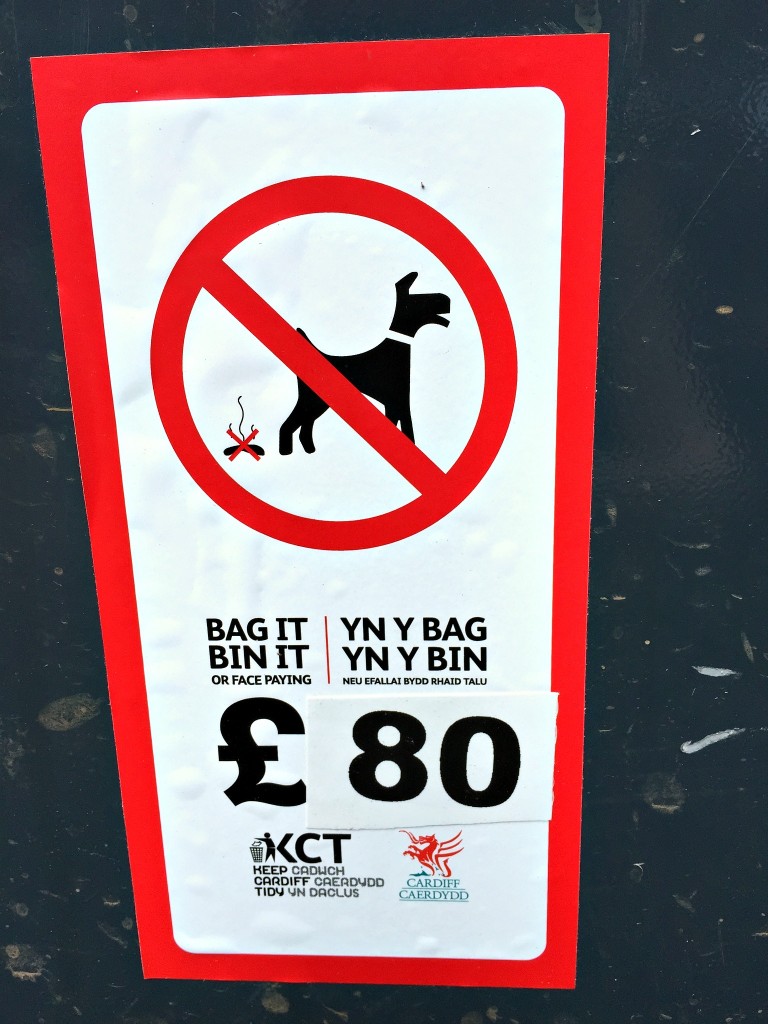 It’s not just me who has a problem with dog poo. In fact, it is illegal not to pick up after your dog. You can be given an on-the-spot fine of between £50 and £80, depending on where you live. If you don’t pay, you can be taken to court and fined up to £1,000.

Some councils are so frustrated by the problem, they are going even further. Daventry District Council in Northamptonshire is to become the first area in the country to issue dog owners with a £100 on-the-spot fine if they don’t have any bags with them to clear up their dog’s poo.

I’m glad to see them taking action, but I find it thoroughly depressing that I live in a society where dog poo is such a problem that this is even necessary.

I would genuinely love to know what their excuse is. I am actually curious as to why they think it is okay not to clean up after their pets.

And as for whoever left that poo in Bute Park this week – it’s now in a bin after I wrapped a nappy bag around my hand, picked it up and disposed of it. Maybe next time, you can do this yourself?

Does this sound familiar? Come join in the chat on the Cardiff Mummy Says Facebook page or by tweeting me on @cardiffmummy