Beyond the kids Theatre reviewsNovember 13, 2019

The Girl on the Train was the book of 2015. Paula Hawkins’ thriller quickly sold millions of copies, topping the best-sellers lists on both sides of the Atlantic, and holding the record for the most weeks at number one in the British hardback book charts, where it remained for 20 weeks. It was the novel everyone was talking about, passing it on to their friends, reading it at book clubs, filling up social media feeds with positive recommendations.

I read it in a day or two, completely gripped by the mystery, suspense and tension, racing through the pages, desperate to find out what happened to missing woman Megan Hipwell and to fill in the blanks in the memory of lonely alcoholic Rachel Watson as to what happened on that fateful night.

I haven’t seen the 2016 film starring Emily Blunt, but I was keen to see how the book translated to stage in this adaptation by Rachel Wagstaff and Duncan Abel, which has been touring the UK since the summer. Some of the more highbrow reviewers haven’t been too favourable about the production… but my theatre companion and I were both gripped and thought it was a very powerful show. 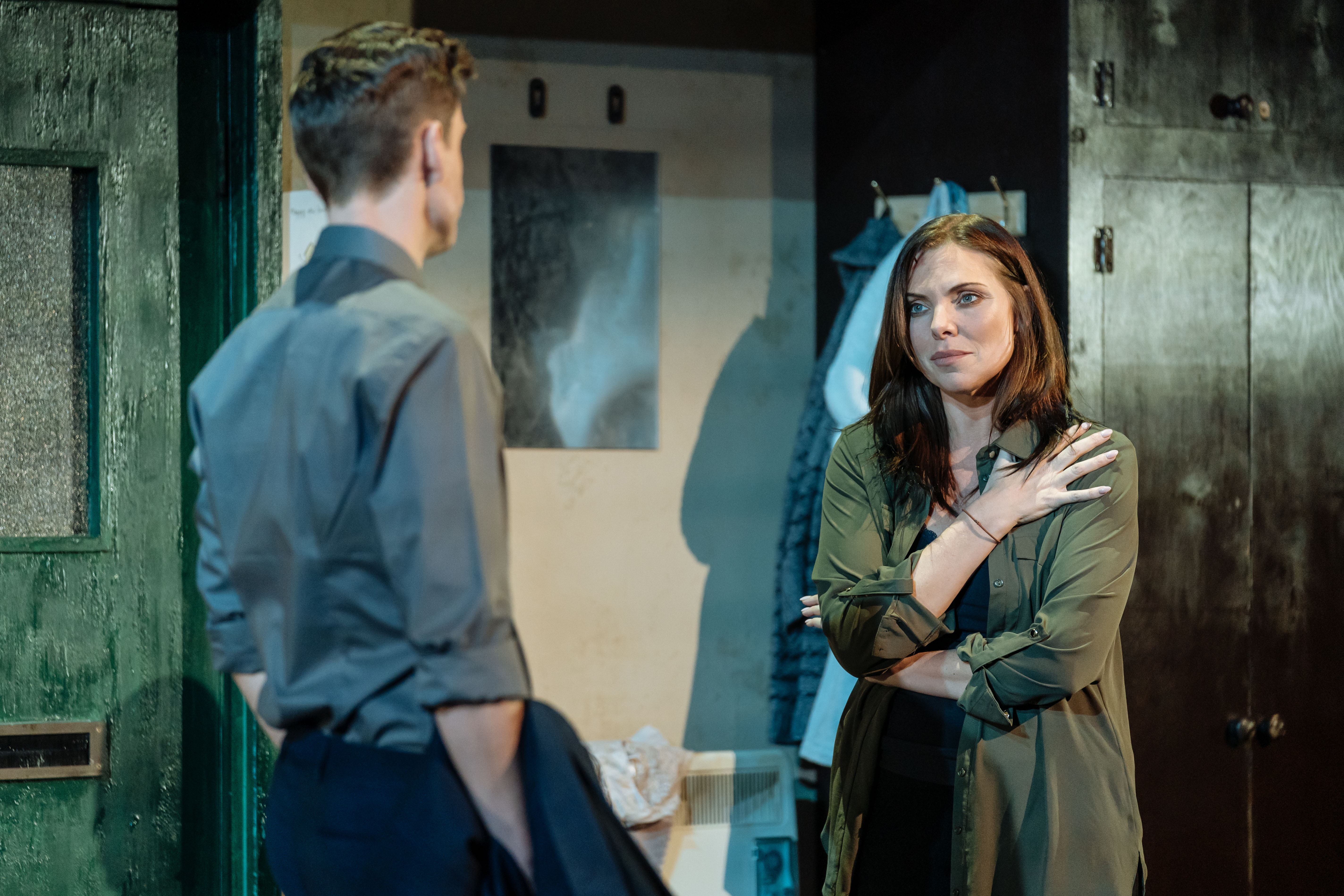 Samantha Womack (who I’ve previously seen in Cardiff as the evil queen in the New Theatre’s Snow White and Morticia Addams in The Addams Family musical at Wales Millennium Centre) plays Rachel, the dishevelled, loner who sips vodka from a water bottle, pukes her morning wine into an empty pizza box, and obsesses over a young and in-love couple she watches from her train window as she commutes to work. As her daily train stops at the junction next to their house, she gains glimpses into what she thinks are their perfect lives, creating imaginary personas for this couple who live doors away from the house she once shared with her now-ex husband, who still lives there with his new wife and baby. 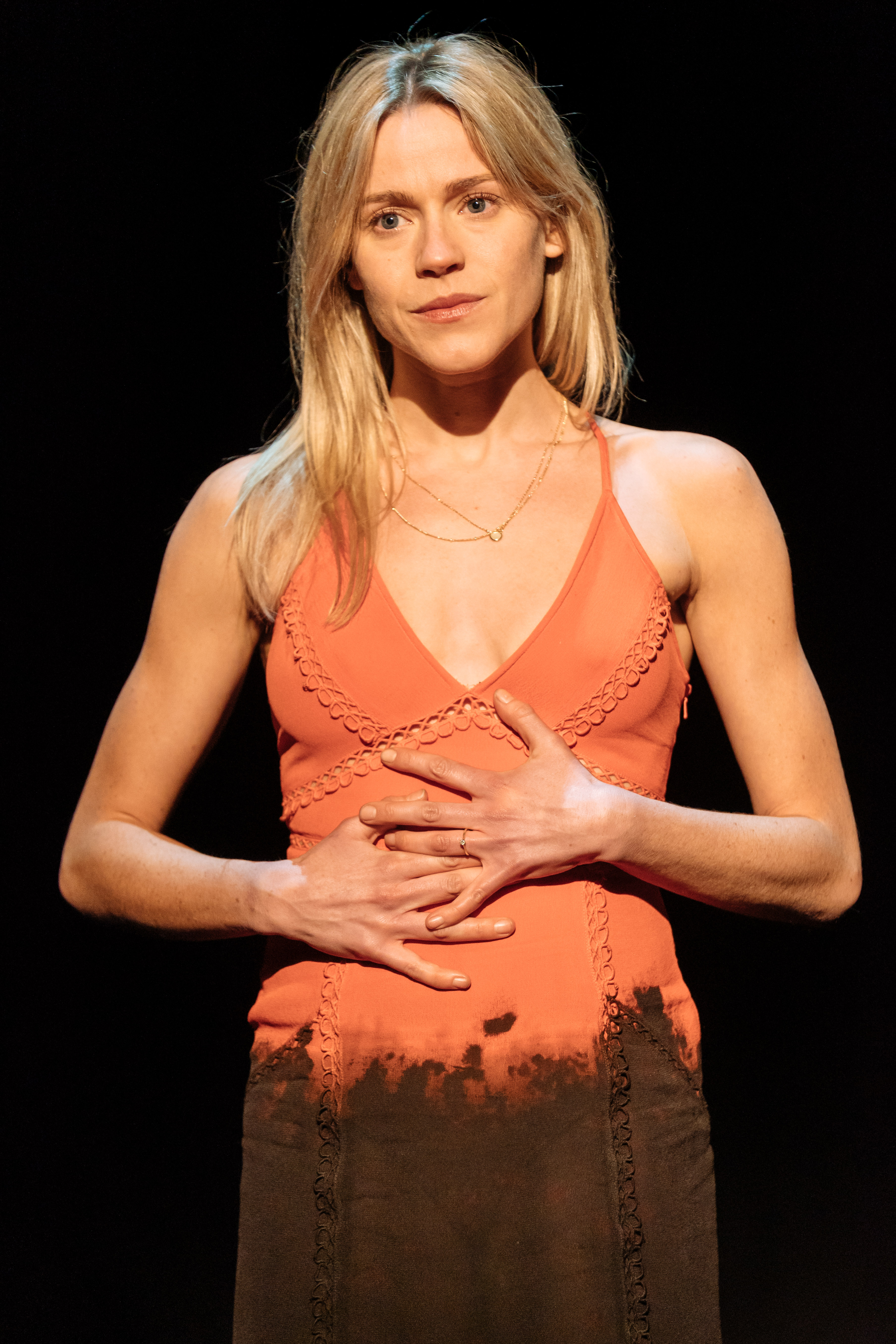 When the woman she has been watching – Megan Hipwell – suddenly goes missing, Rachel finds herself a witness and even a suspect in the enquiry. She knows she has vital information but can’t quite recall it due to alcohol-induced memory blanks. Rachel lies and manipulates. She drinks. She causes trouble between her ex and his new wife. We shouldn’t like her at all. But you can’t help rooting for her, especially as her story unfolds.

Whereas the book uses several narratives to unravel the mystery, the stage production is mostly from Rachel’s perspective. At times it feels like things unfold a little too conveniently, but there is plenty of the tension and dramatic intensity I remembered from the book. Like any good whodunnit we’re all trying to solve the mystery before the conclusion, but the many twists and turns leave us guessing right until the end. The simple sets encased by the black stage backdrops, the projections of the train whizzing by, and Megan (played by Kirsty Oswald) appearing on stage in flashbacks from Rachel’s memory add to the tension. My heart was beating fast and I could feel the adrenaline racing through my veins.

With the passing of time, I had forgotten some of the intricacies of the plot, but slowly it started to drip feed back to me, rather like Rachel’s own memory. 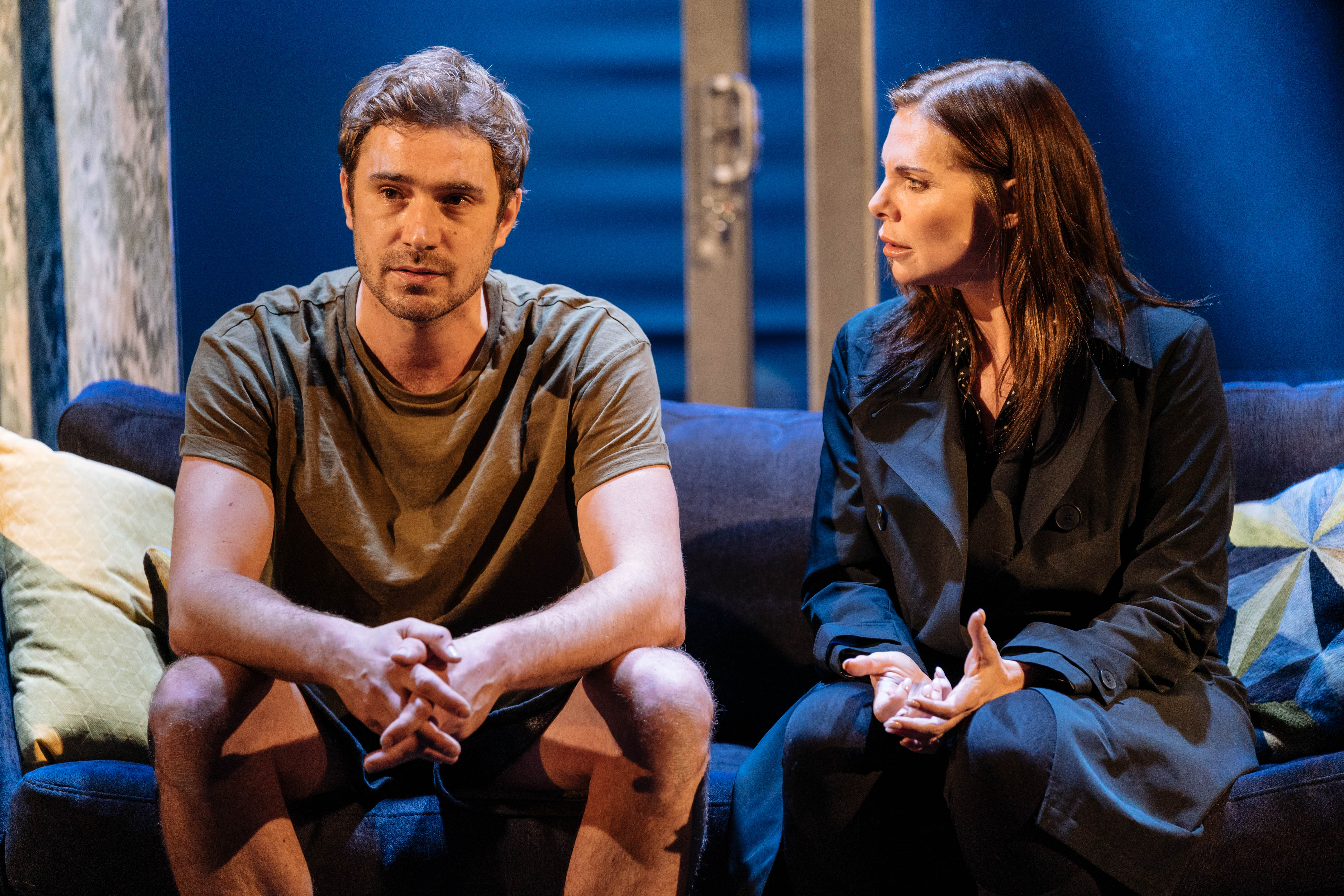 Womack gives a convincing performance, desperate and determined. Other strong performances come from Oliver Farnworth as Scott Hipwell, grieving for his wife but equally disgusted by and attracted to Rachel, while Adam Jackson-Smith and Lowenna Melrose play ex-husband Tom and new wife Anna Watson, with the latter really developing in the second act.

It’s not quite as good as the book, but it is still very good. Tense, dramatic and with insights into loneliness, domestic abuse, gaslighting, alcoholism, and grief, it’s one that will get you thinking and is well worth two hours of your time.

The Girl on the Train is at The New Theatre Cardiff until Saturday 16 November daily at 7.30pm with Wednesday and Saturday matinees at 2.30pm. Tickets cost from £17 to £37. Visit The New Theatre’s website for details.

Homepage » Beyond the kids » A review of The Girl on the Train at The New Theatre, Cardiff