With a name like I Wish I Was A Mountain, it’s clear even before the performance starts that this isn’t going to be your average children’s theatre production.

Performance poet Toby Thompson draws on inspiration from the Hermann Hesse fairytale Faldum for this 45-minute one-man show, brought to Wales by Theatr Iolo, which fuses traditional storytelling with inspired rhyming, jazz music, and someone who does indeed wish to become a mountain.

Thompson is a former Glastonbury Poetry Slam Champion, and his verse is influenced by listening to hip hop music. He’s not what I would have imagined a hip-hop loving Glastonbury champ to look like though – he’s softly spoken, has a wide-eyed innocent look, and admits in the show he’s feeling nervous. 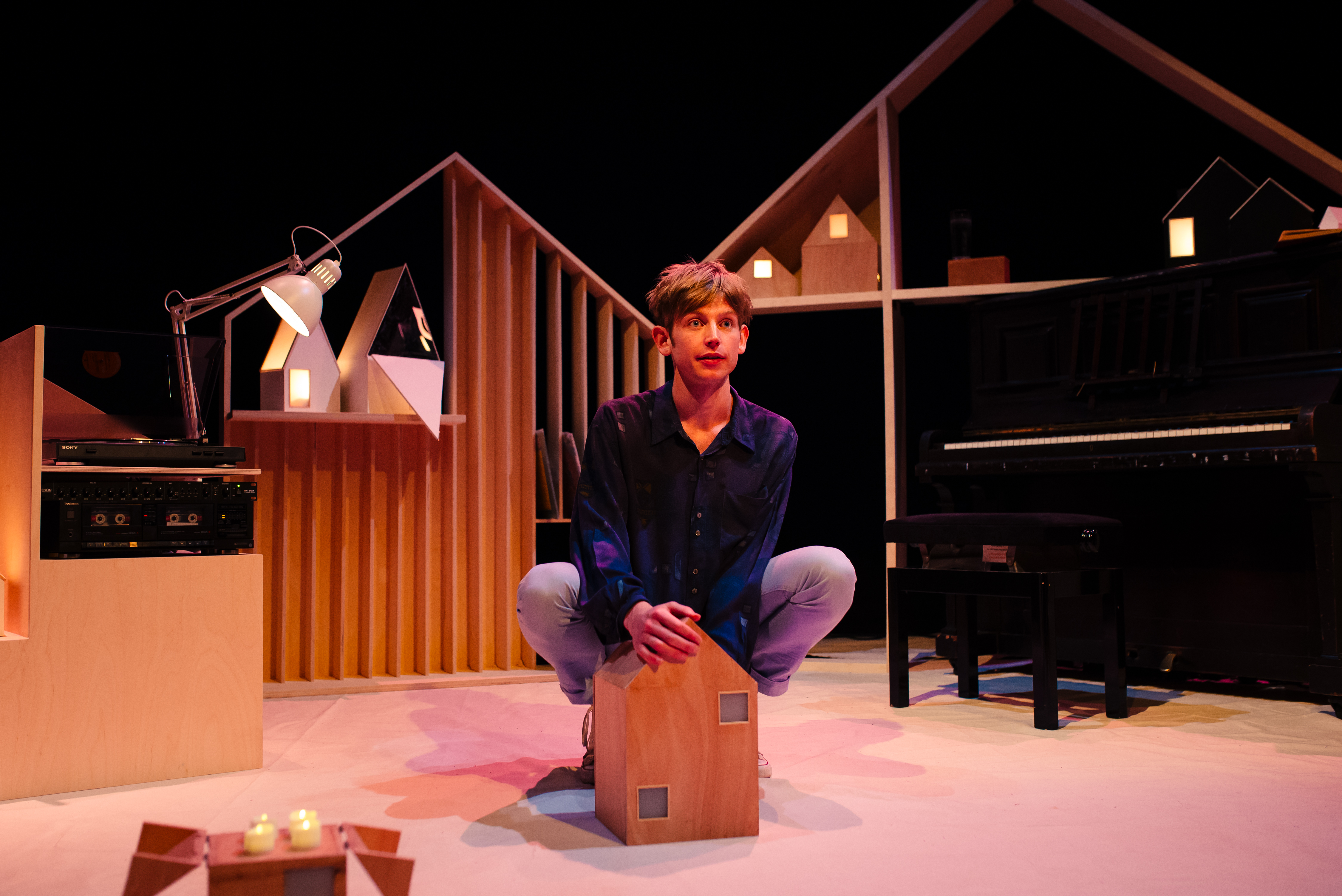 But his gentle, endearing demeanour and skilful storytelling guides his young audience through some really deep philosophical questions in a simple and effective way. Who am I? he asks. What if everything I have right now is everything I would wish for?

His story tells of the people of Faldum as they prepare for the annual fair. These are people just like us, he reminds us, but they lived a long time ago. Just like us, except without Facebook. Just faces. And books. A game of Eye Spy helps set the scene, guiding young imaginations to see what he’s describing.

Alongside the fair’s usual games and stalls a wanderer is granting wishes. Most of the residents ask for riches and wealth – apart from the man who wants to be a mountain… 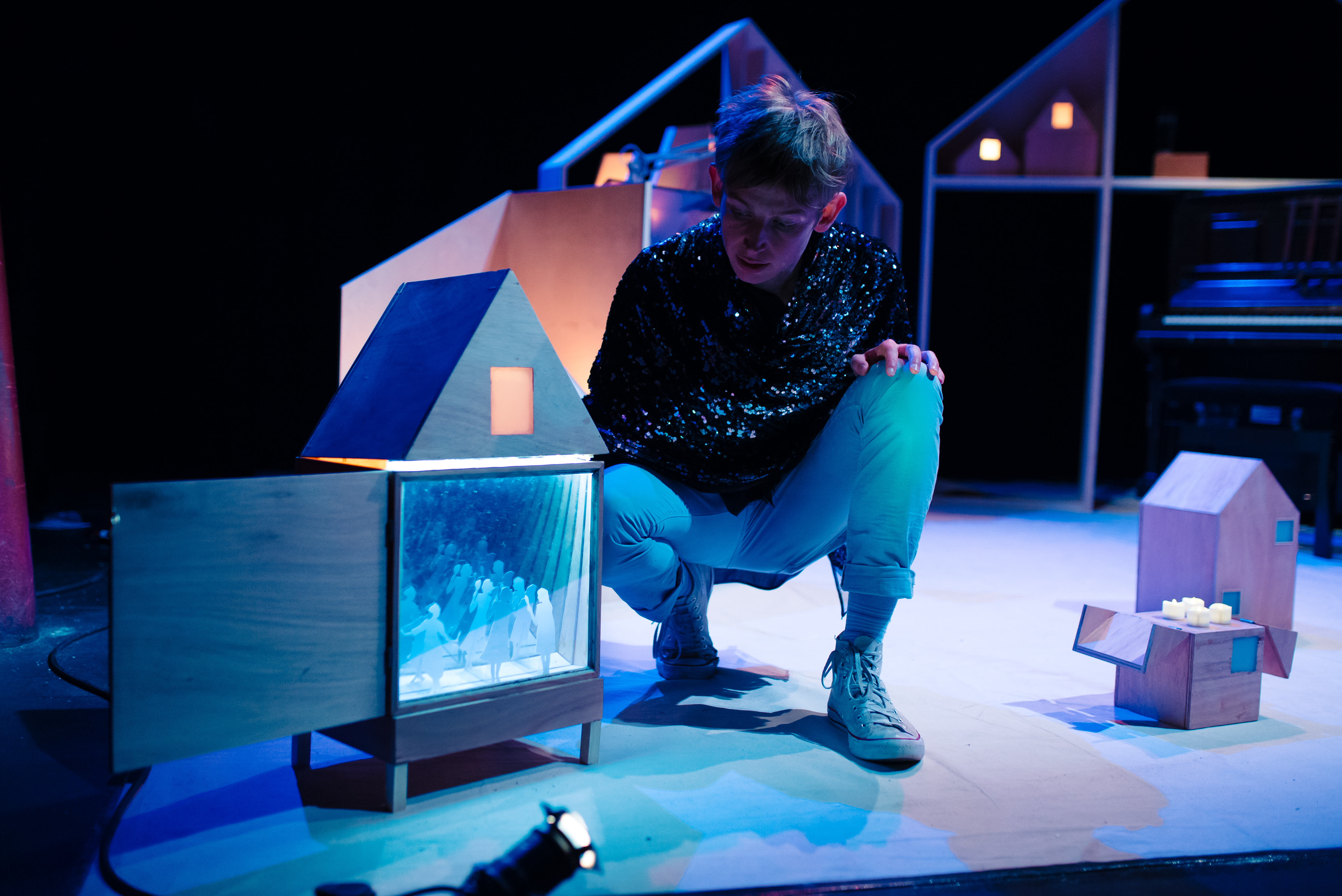 Thompson accompanies his story by playing the piano, but he also adds music on a record player and a tape recorder. The setting is minimal, with a series of plain wooden houses adding to the storytelling. Some have lights inside, one has silhouetted people, another is full of sand which he pours onto the floor. The props and set are clever but incidental; the story would be just as strong without. That said, the minimal setting looks really effective set against the black backdrop of the Weston Studio, Wales Millennium Centre’s smaller theatre, aided by some atmospheric lighting.

The minimum age guidance is six, and some of the subtleties were definitely lost on my five and a half year old. “Lego” was his answer when asked what his one wish would be. My eldest two, aged 9 and 8, talked about solving climate change and creating world peace, and grasped the show’s message of appreciating what we have and finding contentment.

I Wish I Was A Mountain won’t be to everyone’s taste but for older children with inquisitive minds, questioning the world around them, this is a thought-provoking performance that will give you plenty to discuss.

We carried this on after the show with a free-to-ticket holders workshop including child-friendly mindfulness practices and using accessible group activities to explore some of life’s big questions.

I Wish I Was A Mountain is at Wales Millennium Centre until Friday 1 November, with performances at 11am daily and a free workshop for ticket holders on Thursday 31 October at 12.30pm. Tickets cost £7. For more details visit the website here.

Read this article for more family-friendly theatre shows in and around Cardiff between now and Christmas.

Homepage » children's theatre » A review of I Wish I Was A Mountain at Wales Millennium Centre, Cardiff