My children love pirates. They love dressing up as pirates, playing at being pirates, playing with their toy pirate ship. We’ve been to so many pirate-themed birthday parties and Little Man O even had one of his own when he turned three, where we went on a pirate obstacle course and walked the plank. So it’s no surprise that they love books featuring pirates, too. Here are 7 picture books ideal for children aged 6 and under that my children love. Let me know if there are any you think we should add to the list. Tweet me on @cardiffmummy or join Cardiff Mummy Says on Facebook. 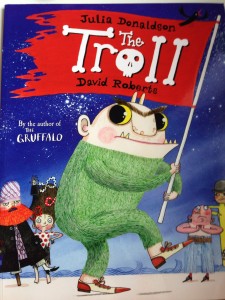 1. The Troll by Julia Donaldson and David Roberts, Macmillan, £6.99

Julia Donaldson is the queen of children’s picture books, and this one is a firm favourite in our house. Unlike a lot of her books, it doesn’t rhyme, but there are lots of catchy repetitive phrases and patterns in the book that soon engage young readers. It combines two narratives. Firstly, the troll, who is fed up of eating fish for tea and desperately seeks a goat so that he can make a delicious feast. And secondly, a crew of rugged pirates who are searching for buried treasure so that can buy a decent to learn how to serve up an abundance of fish. Their two worlds combine in this slightly dark but not too scary tale, wonderfully illustrated by David Roberts, who also worked with Donaldson on Tyrannosauras Drip. 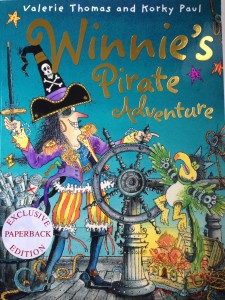 We love the Winnie the Witch books in our house! This one was given to Little Miss E as a present and we enjoyed it so much, we have since bought the whole collection. It’s so refreshing to see a strong and feisty female lead with plenty of exciting adventure and no pink or sparkles at all. In this book, Winnie and her trusty sidekick, Wilbur the Cat, magically transform themselves into pirates for a fancy dress birthday party and head off to find buried treasure, only to discover a crew of pirates already on their treasure island. 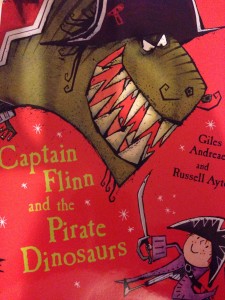 3. Captain Flinn and the Pirate Dinosaurs by Giles Andreae and Russell Ayto, Puffin, £6.99

One day while at school, our hero Flinn steps into a store cupboard to get some pens, only to find a pirate captain crying because his ship has been stolen. Flinn and his friends soon find themselves helping Captain Stubble look for his missing boat, which has been captured by a crew of pirate dinosaurs. Pirates AND dinosaurs in the same book! Little Man O is in his element with this one. With a hint of danger and captivating illustrations, this is a big favourite in our house. 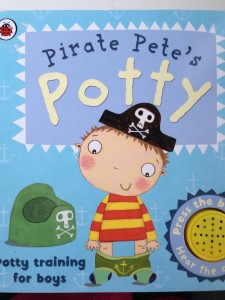 This really helped us with potty training – Little Man O loved pressing the sound button to hear people cheering. He liked choosing his favourite pants and potty from the brightly coloured illustrations and quickly learnt rules such as washing hands and how to wipe. Even though he’s been potty trained for about a year now, he still loves the book. The only downside is that there are very separate versions of this book for boys and girls, the latter featuring a princess. 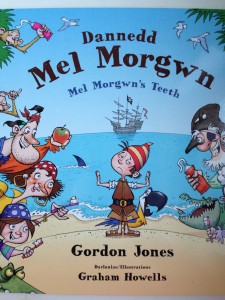 This bilingual Welsh and English book was sent to us by the lovely people at Rily, a small Welsh publishing press, and my children really enjoyed it. It follows Mel Morgwn, a young pirate boy who refuses to clean his teeth, saying that because animals don’t clean their teeth, neither will he. His trusty pet parrot takes him on adventure visiting different animals where Mel discovers that even they may not use brush and paste, they have their own ways of ensuring their teeth are clean. The bright pictures in this are very engaging, while the fact that both the English and Welsh text appears on each page is great for households like ours, where one parent speaks Welsh and the other doesn’t, not to mention encouraging reluctant tooth-brushers. 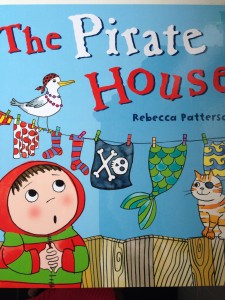 This brightly-coloured book perfectly captures the vividness of a child’s imagination as the youngsters living on a street try to figure out who lives in the house on the corner. When a bunch of sea-gulls land on the roof, one of them says it must be pirates… and indeed, they soon realise they can see gold in the garden and try their best not to look at the pirate washing in case they turn into a jellyfish. But what happens when someone opens the door? This is a fun and imaginative book that always gets my children wondering if there are pirates somewhere on our street. 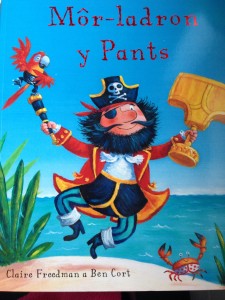 Completing the popular trilogy of Aliens Love Underpants and Dinosaurs Love Underpants, this is a mischievous and adventurous story that follows a group of pirates as they set sail to find the Pants of Gold. My children think the illustrations – such as sharks wearing brightly coloured pants – are hilarious. As you might be able to tell from the picture, we have the Welsh version of this book, Mor-Ladron y Pants and having had the English one from the library, it’s a good translation. The only downside for learners is that it doesn’t include an English translation.

Let me know if there are any you think we should add to the list. Tweet me on @cardiffmummy or join Cardiff Mummy Says on Facebook.

10 Comments to Books we love – 7 picture books about pirates