Bright, colourful, energetic and uplifting, we absolutely loved Hairspray at Wales Millennium Centre last night. The new production of the Broadway and West End smash has just begun a year-long UK tour, starting with a two-week stint in Cardiff. We thought the show was utterly brilliant. Full of upbeat, catchy songs, jaw-dropping dance moves and a wardrobe of vibrant costumes, it’s a real stage spectacular that makes you want to get up and out of your seat and dance along.

The show is set in Baltimore in 1962 where, against the odds, overweight teenager Tracy Turnblad lands a role dancing on her favourite TV programme The Corny Collins Show. She uses her new-found fame to fight for integration of black and white dancers on the show, putting her own future at risk for what she believes in. 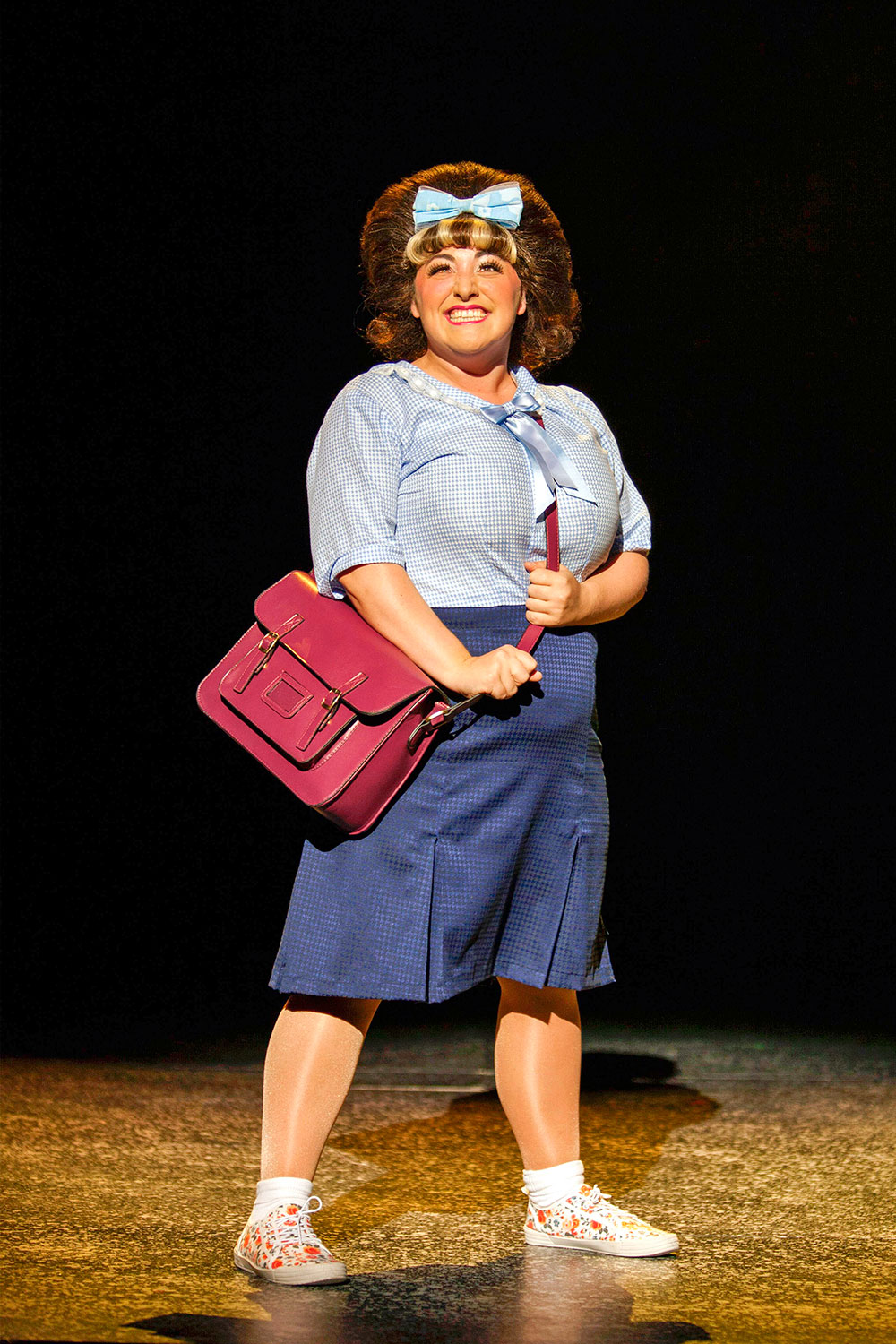 I took my two eldest children, 7¾-year-old Little Miss E and Little Man O, nearly 6, and we thought it was brilliant. They’ve previously watched and enjoyed the 2007 musical film version (there’s also an earlier 1988 one starring Ricki Lake, which I first watched and loved as a teenager). I wanted them to be aware of the story line so that we could discuss the themes of racial segregation beforehand, answering all their questions before we got to the theatre. It’s the first time they’ve learned about segregation and I was impressed with their understanding and compassion.

The whole production was tightly polished, with brilliantly-slick choreographed ensemble numbers. I particularly liked The Big Doll House, which sees the main female cast members in jail, as well as You Can’t Stop The Beat, the show’s closer and its most famous musical number.

There are also plenty of outstanding individual performances too.

Tracy Turnblad is played by Rebecca Mendoza, with Hairspray her professional stage debut. She is fresh out of drama school having only graduated from the prestigious Italia Conti Academy of Theatre Arts this July. Yep, just a month ago and already killing it in an iconic lead role. She is bubbly and passionate with a belter of a voice and confident dance moves. From the first few lines of opening number Good Morning Baltimore, she had me captivated. She’s perfect for the role. She worked well with her love interest Link Larkin (Edward Chitticks), in particular their duet Without Love. 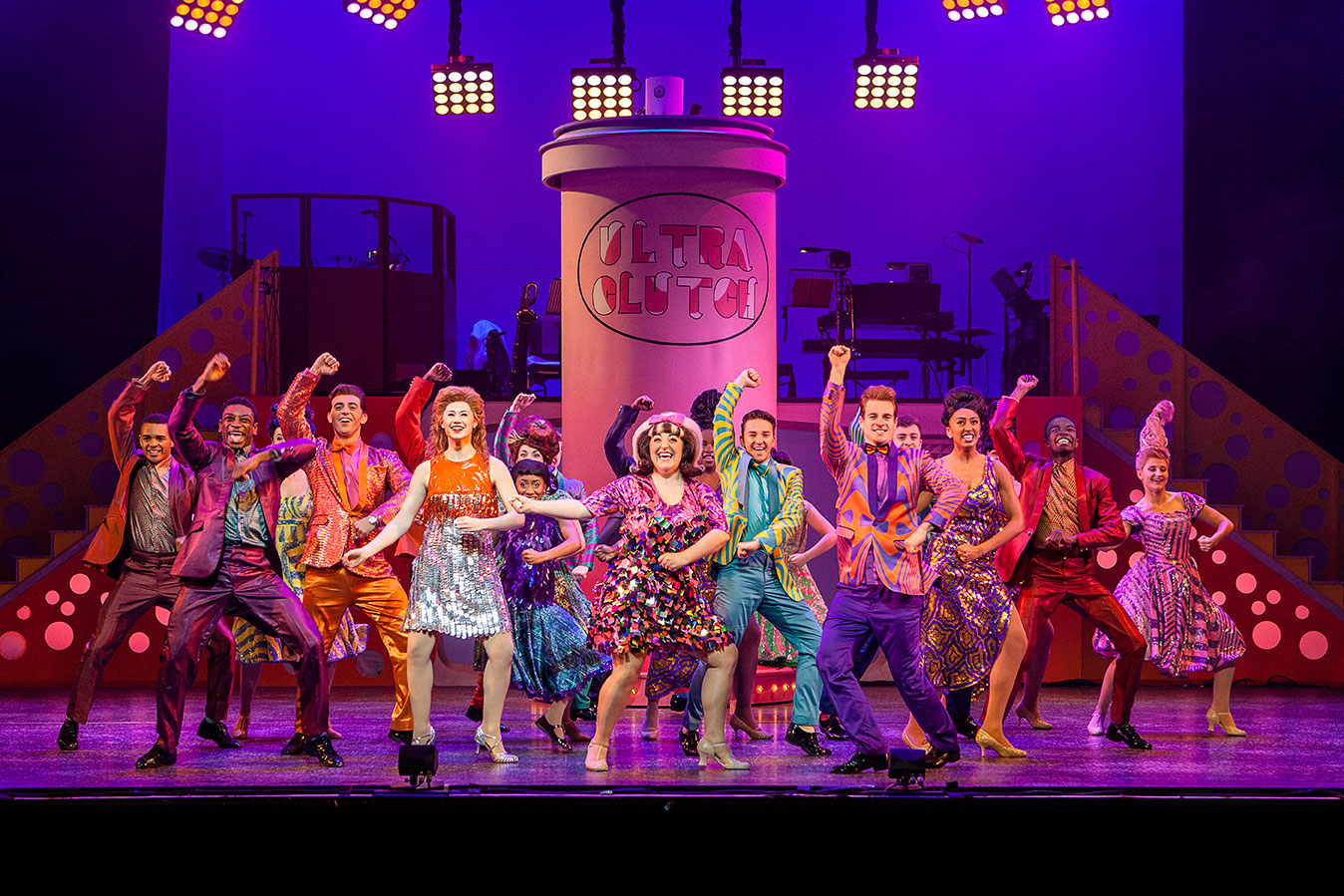 Little Man O was open-mouthed when Layton Williams in the role of Seaweed (who Tracy meets in detention at school and recognises as one of the dancers on the once-a-month The Corny Collins Show Negro Day) started backflipping across the stage. In fact, the whole audience gasped in amazement. His dance skills are incredible throughout the show. He’s been dancing on stage professionally since the age of 12 when he played the title role in Billy Elliott, and was also one of the original young Michael Jacksons in Thriller Live in the West End.

Gina Murray is wondrously villainous as Velma Von Tussle, producer of The Corny Collins Show, who will go to any lengths possible to see her daughter Amber (Aimee Moore) succeed. An experienced West End leading lady, Gina’s vocals are strong, powerful and charismatic.

Likewise former X-Factor star Brenda Edwards as Motormouth Maybelle, the strong and sassy owner of a downtown record store, host of Negro Day and mother of Seaweed and Little Inez (Monifa James – incidentally Little Miss E, 7 ¾, said she was her favourite character in the show). Her musical number Big, Blonde and Beautiful was spine-tingling stuff.

Norman Pace (of Hale and Pace fame) plays Wilbur Turnblad, Tracy’s father, while Matt Rixon is her mother Enda (the part is traditionally played by a man in drag, with John Travolta in the iconic role in the 2007 film adaptation). I loved these two together; their musical duet You’re Timeless To Me had some brilliantly comic moments, even if some of them were slightly risqué. 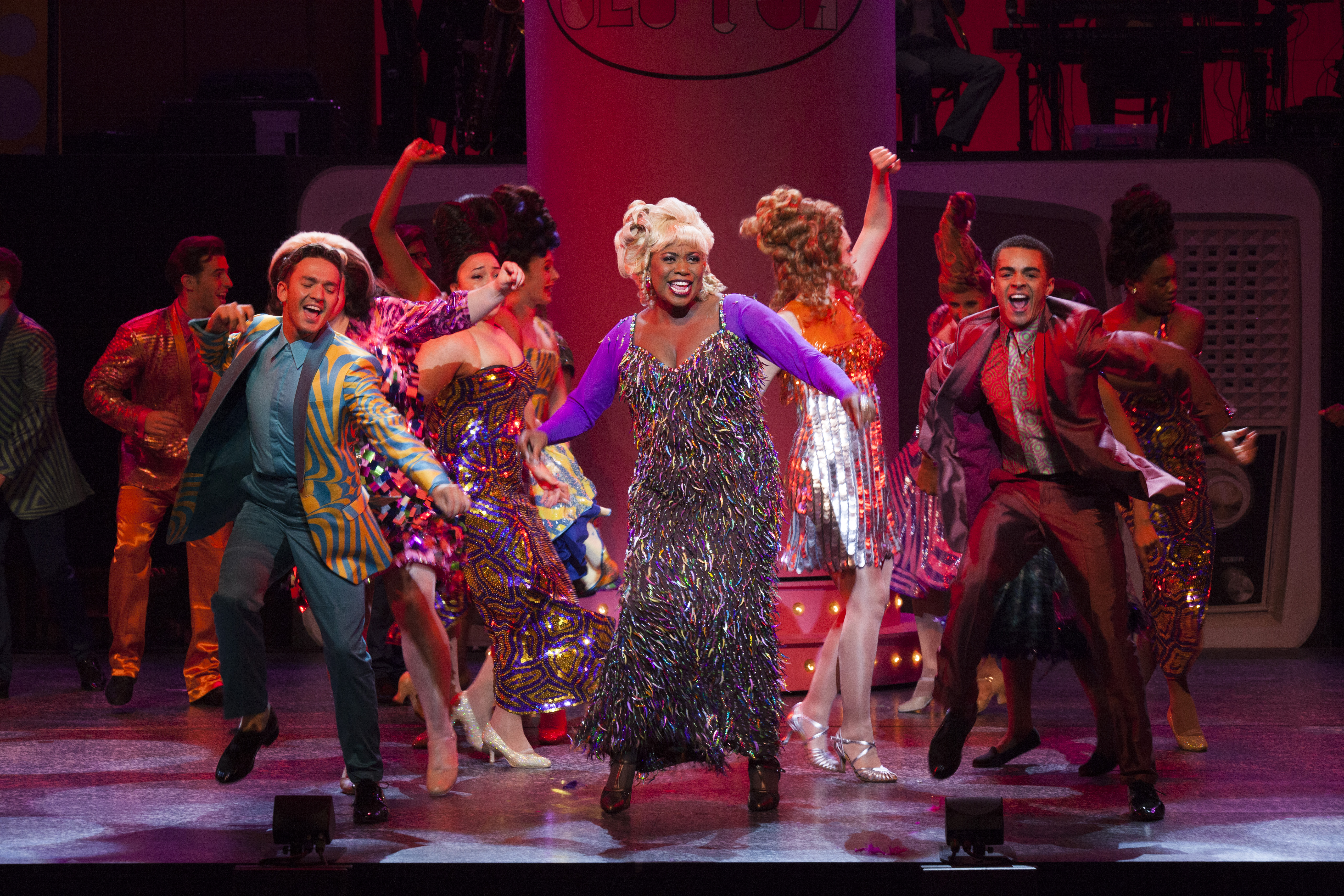 And on that subject, the age guidance for the show is 5+ but thankfully most of these one-liners and innuendos went over my children’s heads while I tried to stop myself from crying with laughter.

The only downside for me (and this is nothing to do with the show itself) is how sad it felt to be watching the musical just hours after the horrific terrorist attacks in Barcelona, and days after a woman was killed during a protest against a rally of white supremacists in Charlottesville. It makes me ashamed that 55 years on from when the show was set, we still don’t have equality.

You can’t help but wish star of the show Tracy Turnblad would come along and somehow bring harmony to this crazy world of ours, just as she does on stage.

The show is 2 hours and 30 minutes, including a interval.

Thanks to Wales Millennium Centre for providing us with review tickets