With over 300 acres of grassland, woodland and wetlands, Parc Slip Nature Reserve, in Aberkenfig, Bridgend, is a beautiful wildlife haven, home to all manner of birds, plants and flowers, pond life, and other creatures.

We headed there yesterday afternoon to escape the school holiday crowds and had a lovely peaceful afternoon exploring.

It’s really accessible for families – and free to visit too, which is always a help when you are trying to entertain your children for six weeks on a limited budget. 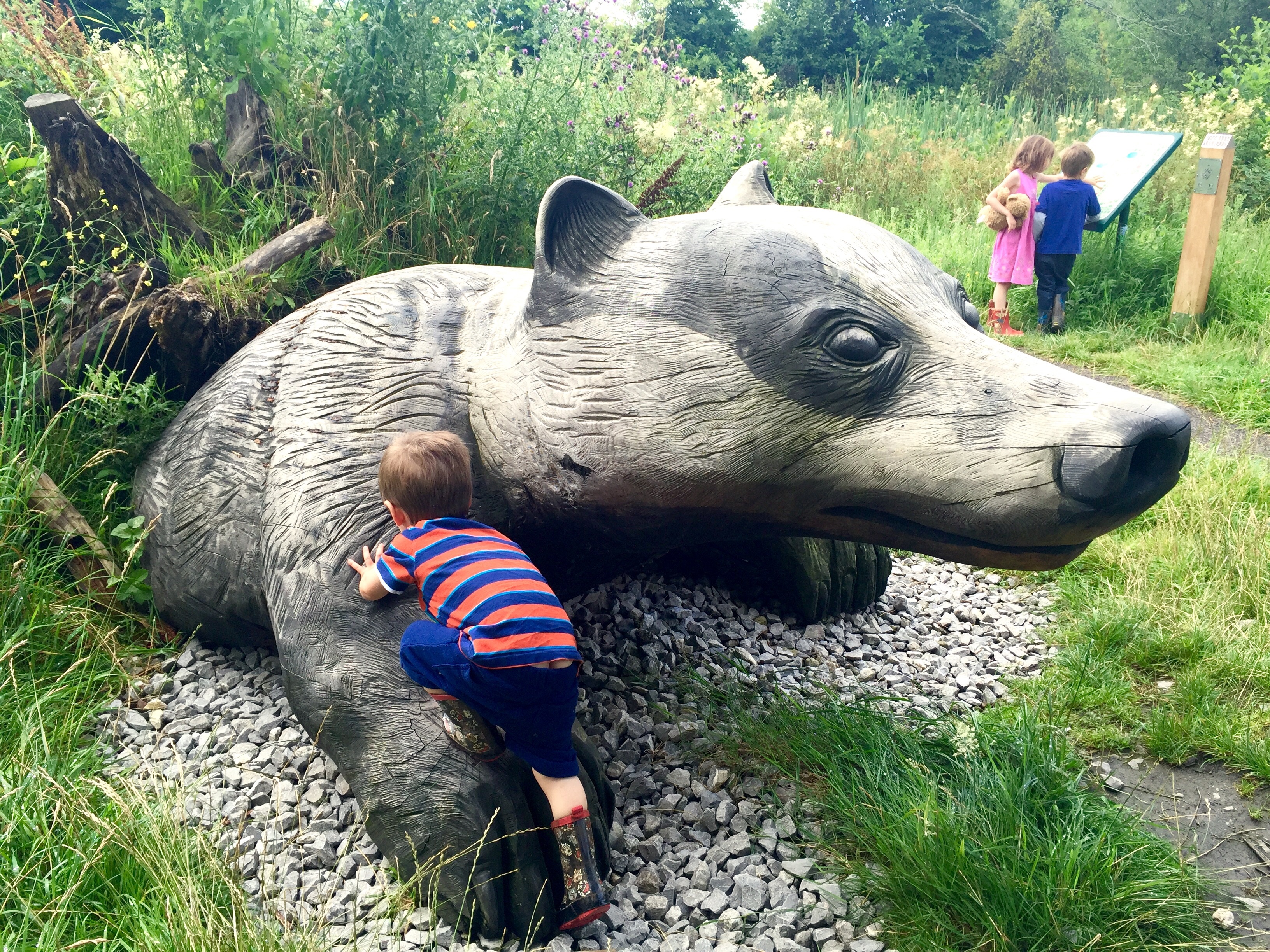 As soon as we drove into the car park, my children spotted the giant carved badger the reserve is famous for. They had great fun climbing on his back and talking to him.

The little gated area around the badger is perfect for children, with a couple of reed-filled ponds, where we spotted waterboatmen, and a huge bug hotel. There’s a picnic table here, so we had the packed lunch we’d brought along with us. 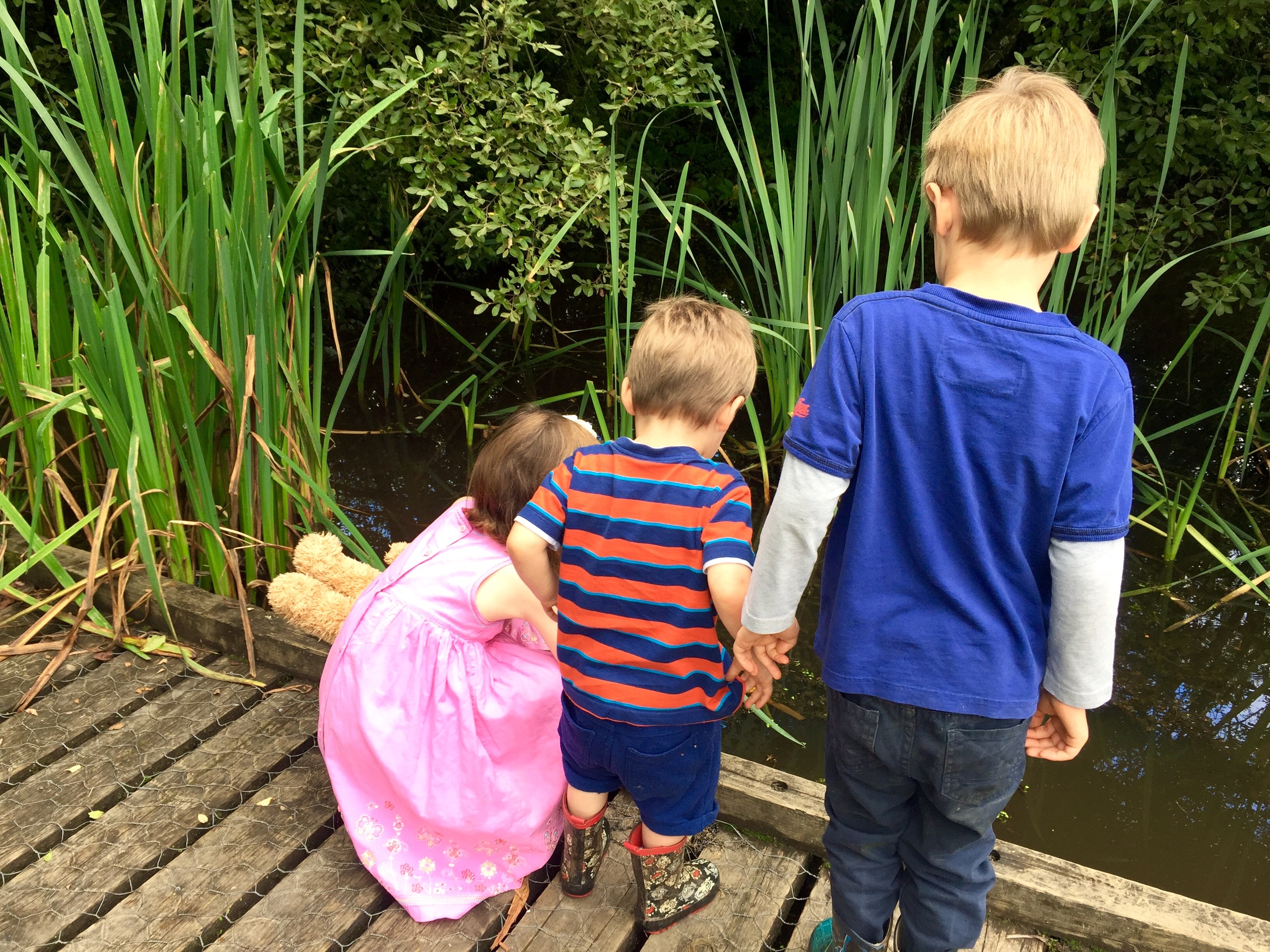 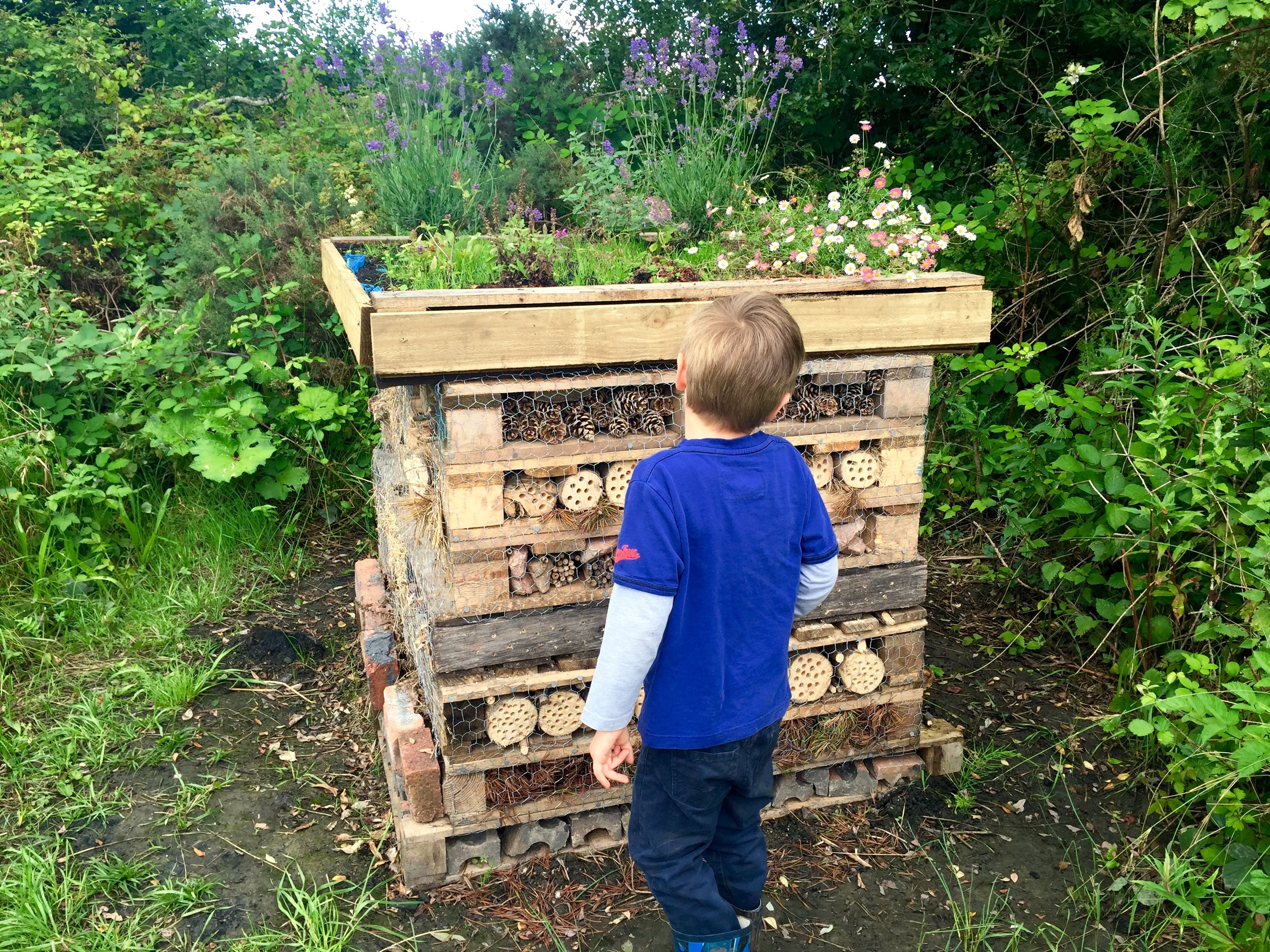 From there, we headed on the nature trail, a circular route which begins and ends in the car park area. The paths are accessible for buggies and wheelchairs (although a bit bumpy and gravelly in parts), and dogs are welcome although they are not allowed in the ponds. 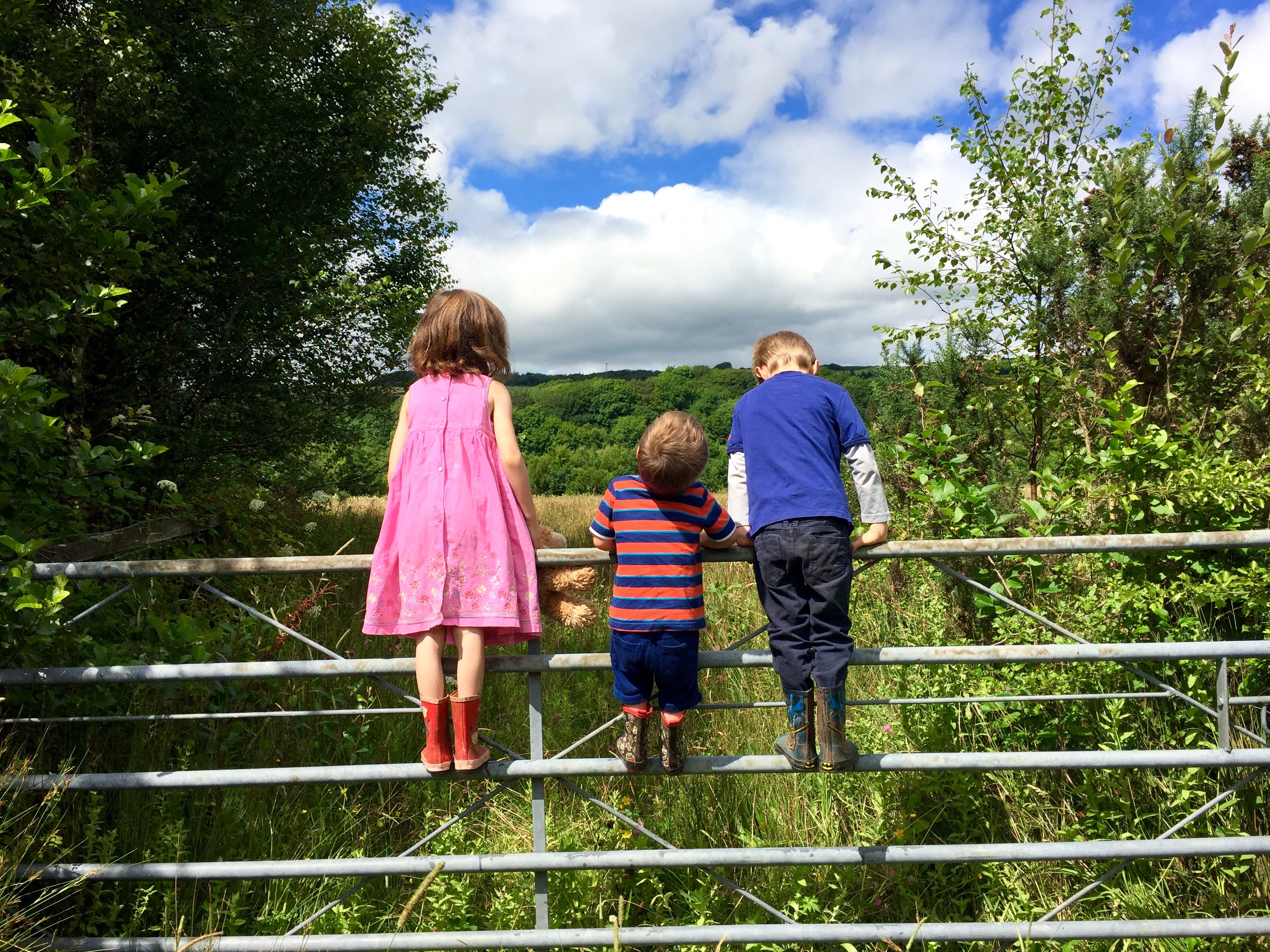 I was impressed that Toddler Boy I, my 2¼-year-old youngest child, managed to walk most of the way around without wanting to be carried too much. We are well and truly living in a toddler pace world at the moment with Toddler at that stage where everything he sees is a marvel to be explored and admired.

It took us about 45-minutes to get down the first path because he wanted to look at every flower, examine every stick he found. 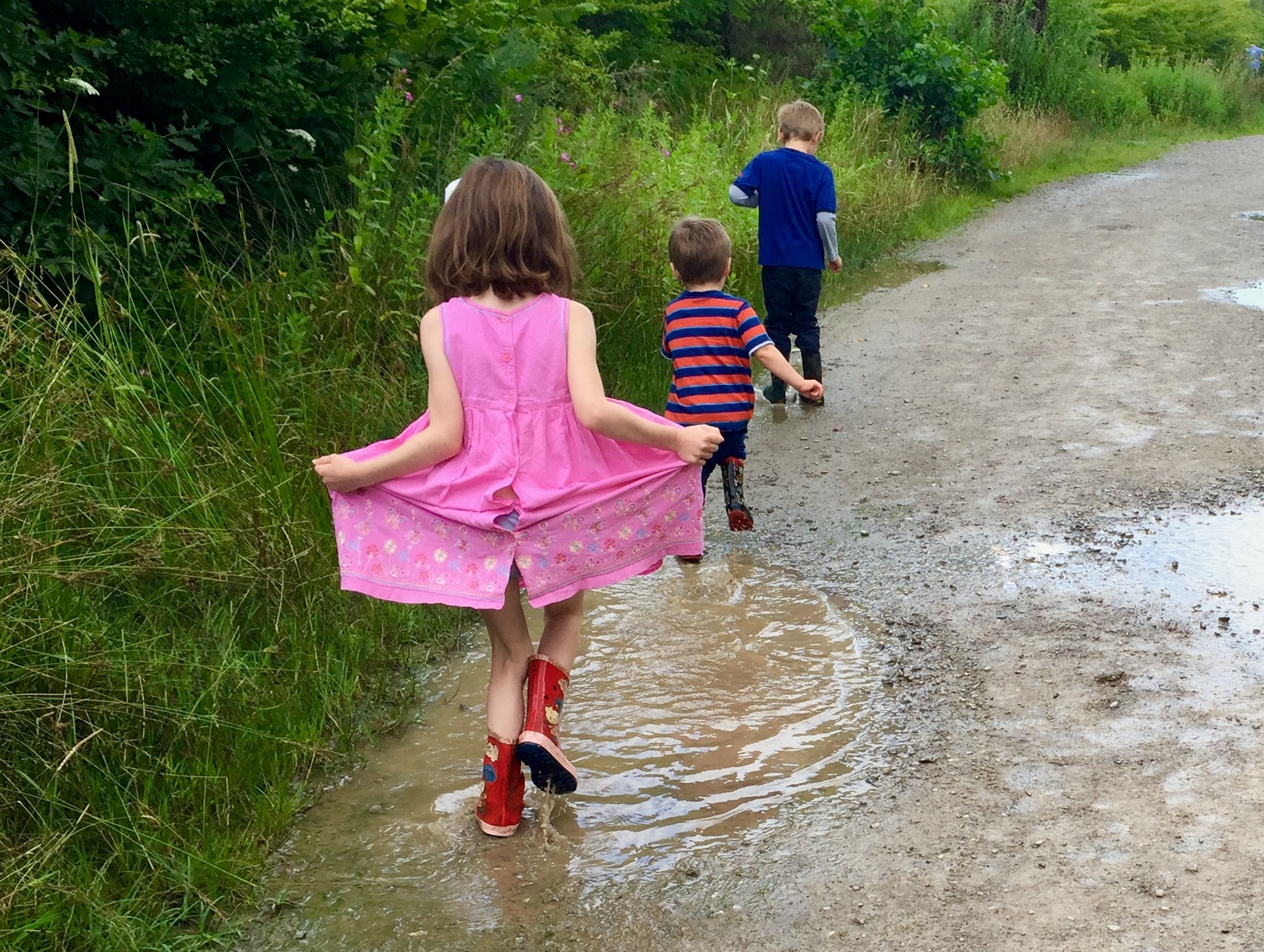 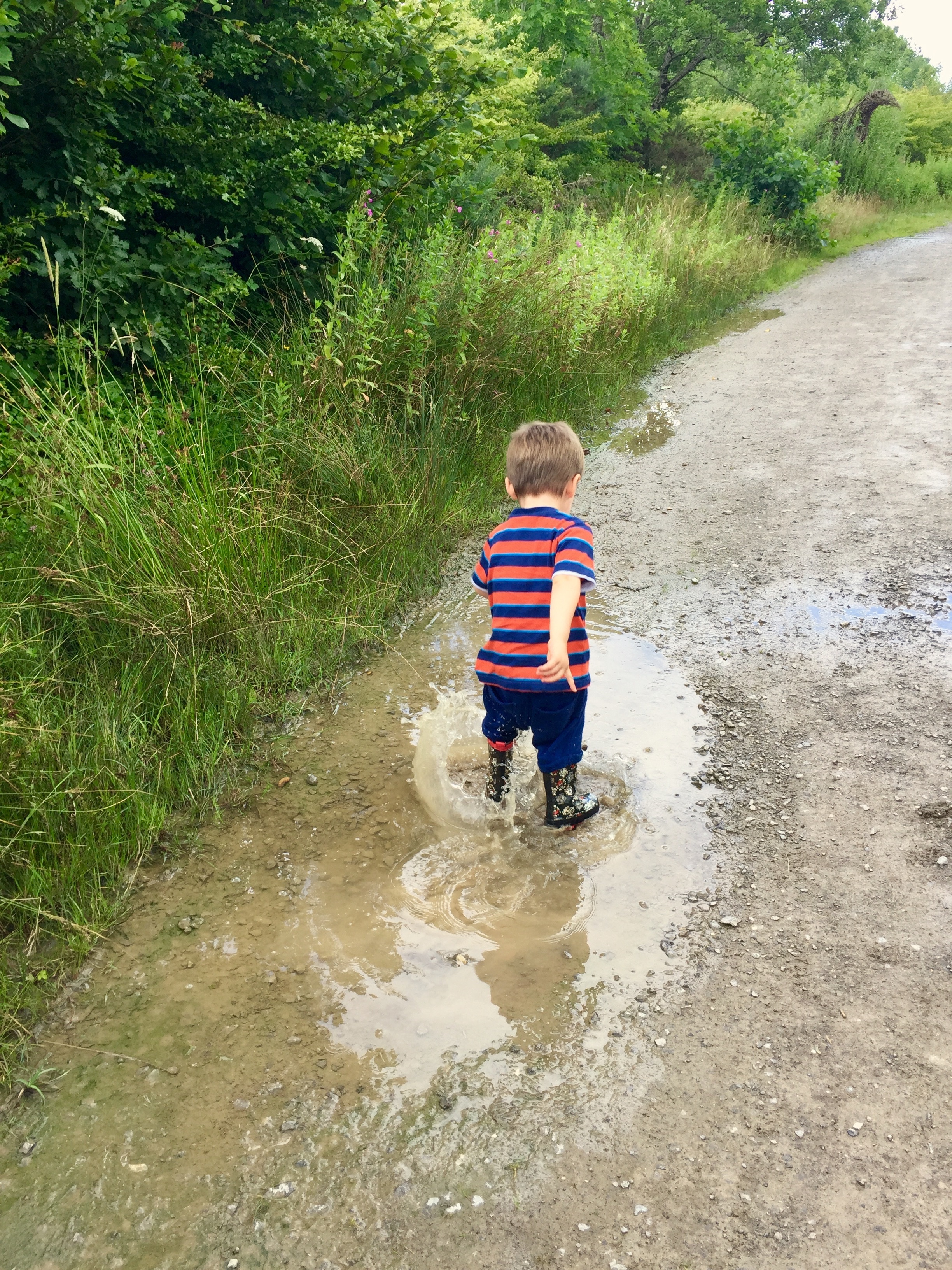 We spotted plenty of butterflies and bees on this path – but the biggest attraction was by far the puddles. As it had been raining early in the morning, we’d packed our wellies. A good thing too, because all three of my children – Toddler and his big brother and sister, Little Miss E, 6½ and Little Man O, who is coming up to 5 – had great fun running in and out and jumping up and down in them.

There were a few viewing points along the way, where you could look at (but not enter) the fields where research is taking place. I know woodpeckers, adders, small rodents and all manner of creatures have been spotted at Parc Slip, but I think having heard my children laughing and running, they were probably all hiding! 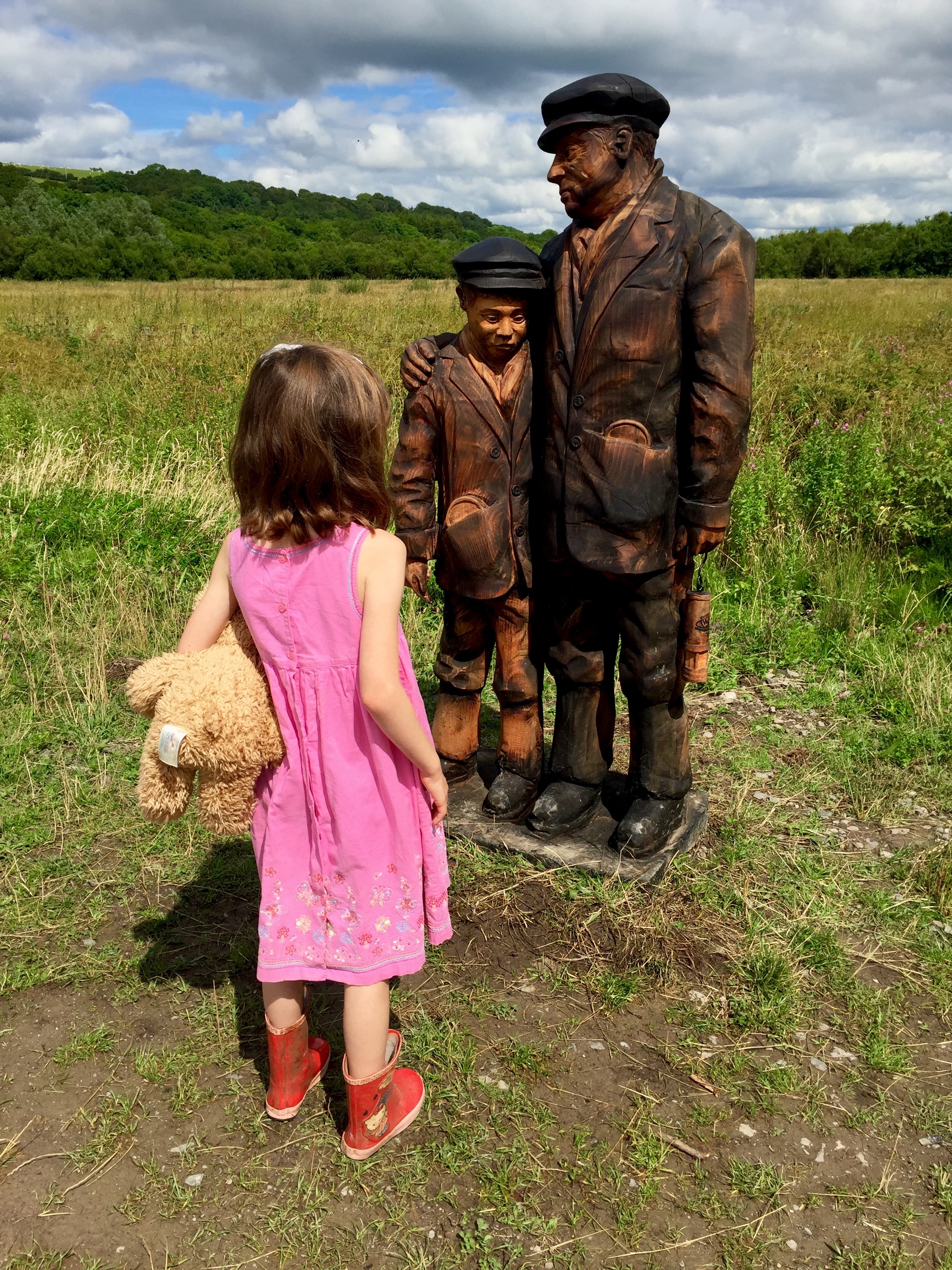 At the end of this path, we turned right and came to a carved wooden statue of a coal miner and his son.

Looking at it now, you’d never believe Parc Slip used to be coal mine – and the statue pays tribute to this. Opening in 1860, by 1890 the mine employed 200 local people, producing 300 tons of coal each day.

Sadly, however, on 26th August 1892, an underground explosion, triggered by a hole in a miner’s lamp, ripped through the mine, with 112 men and boys losing their lives in the tragedy. Their names are listed in the visitor centre. The mine closed in 1904, reopening between the 1960s and 1980s as an open cast mine, before becoming a nature reserve in 1999. I found the emotion in the faces of the statues quite overwhelming, having not long read a beautiful poem about the tragedy on display in the visitor centre. 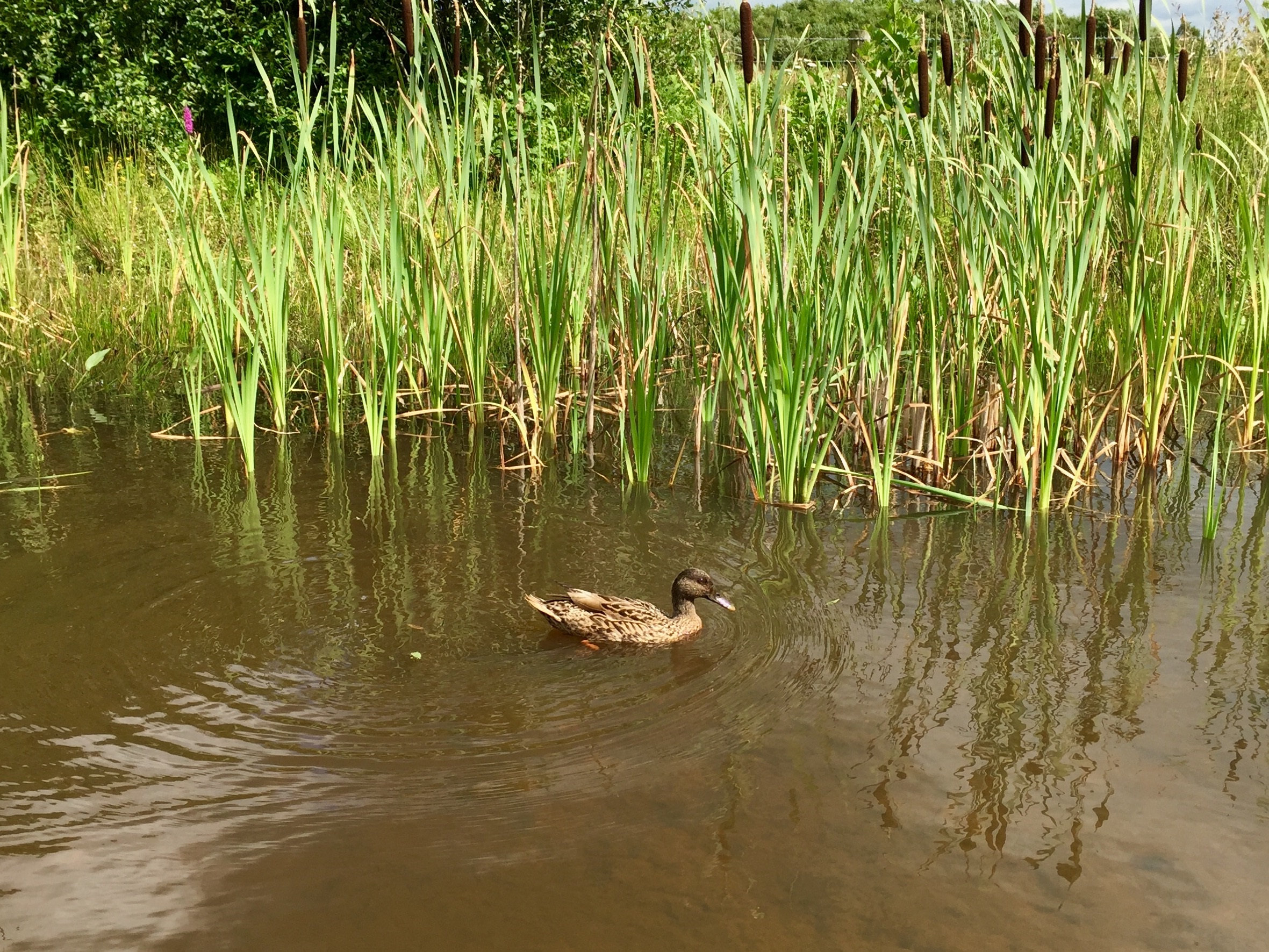 A short walk took us to the other side of this marshy field, where we found a duck swimming in among the reeds. Just the one, but my children were excited enough.

From there, we found a wooden shack, which is a viewing hut to look over the northern wetlands. 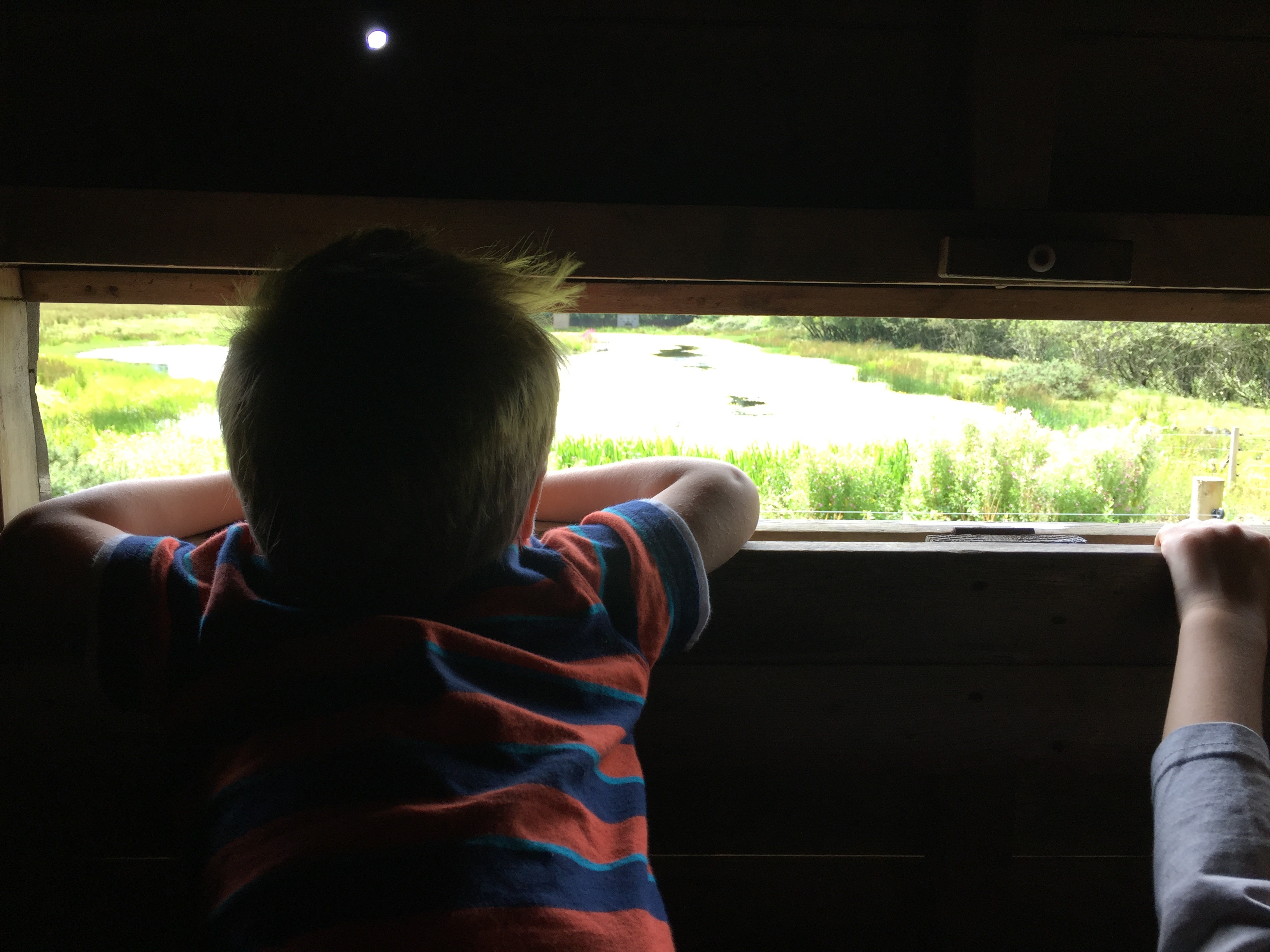 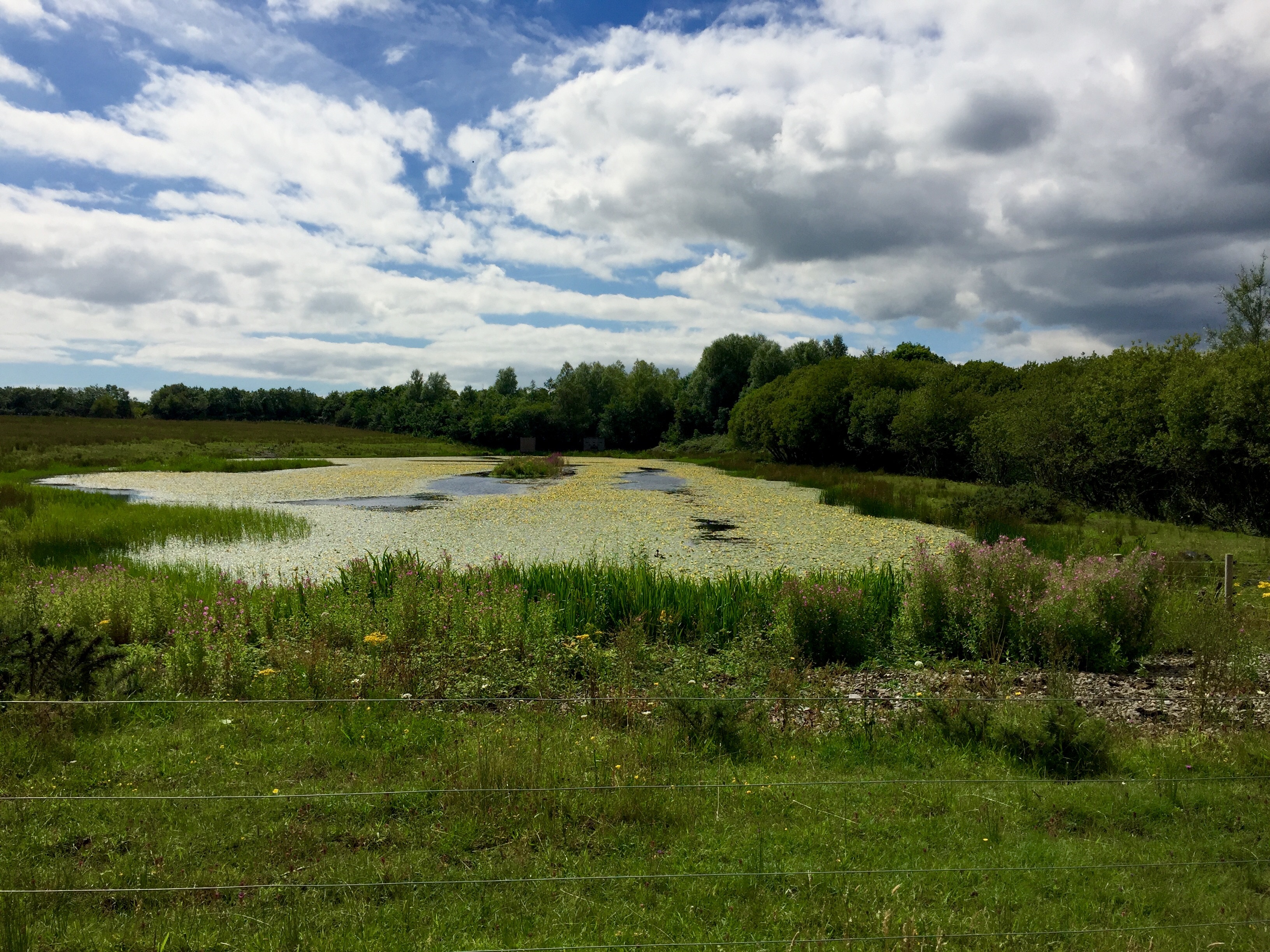 Opening the shutters reveals a beautiful picturesque pond filled with ducks and ducklings. If you had the time, and didn’t have three excited children, this would be a wonderful place to sit and watch.

The path from here took us alongside a small river and woodland area, back to the wooden badger and the visitor centre. 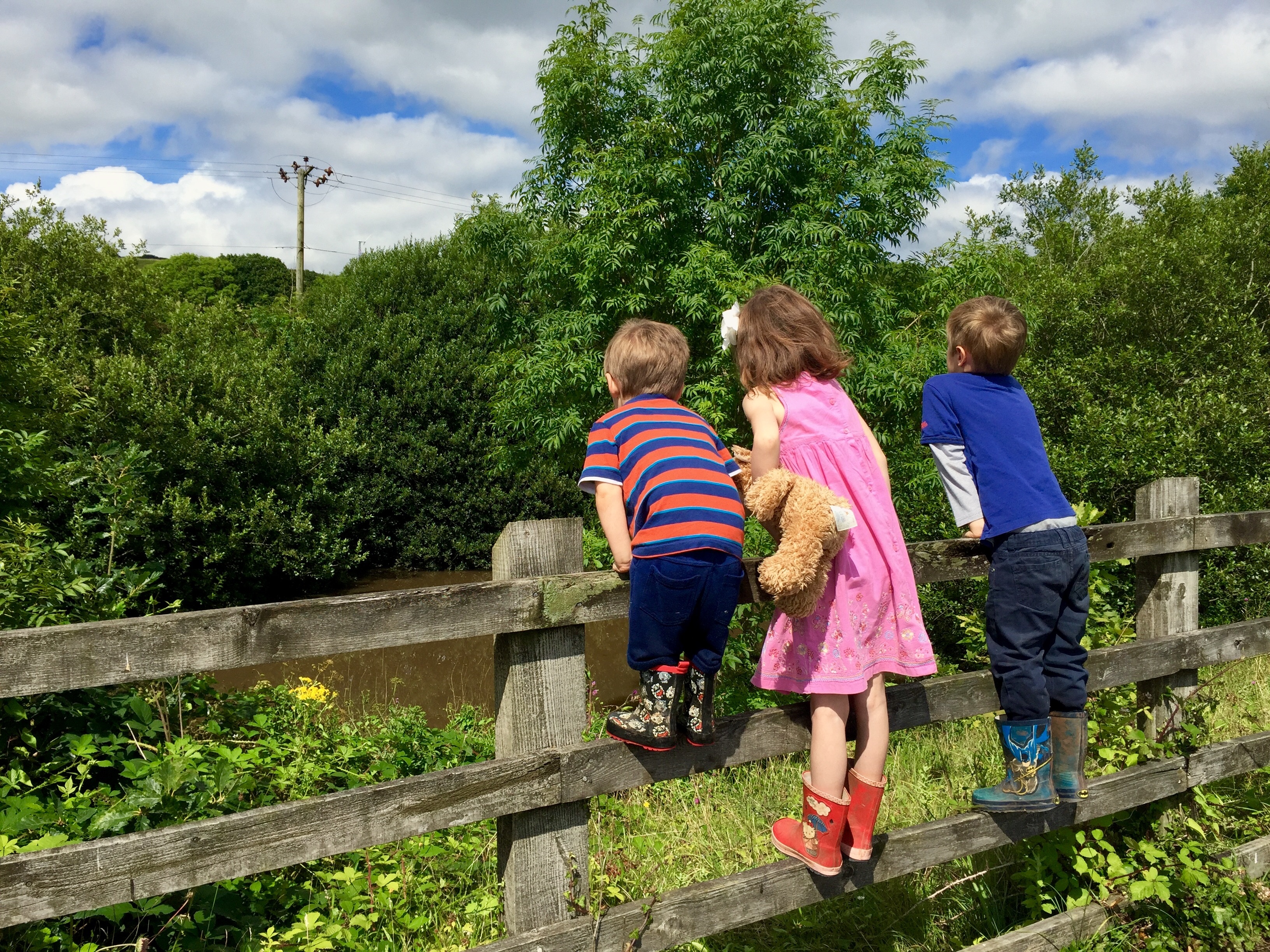 Managed by The Wildlife Trust of South and West Wales – which has more than 80 sites in Glamorgan, Pembrokeshire, Ceredigion and Carmarthenshire – Parc Slip also runs a number of wildlife workshops and activities for children during the school holidays, such as reptile rambles and moth hunts. Details on their website.

It took us about half an hour to drive there from North Cardiff and we stayed for around two and a half hours. There are more areas to explore, but tired little feet meant we called it a day after the nature walk.

There are picnic tables, as well as a lovely café in the visitor centre. The cafe has a toy-filled area for young diners, and there are toilets, including disabled and baby change facilities too. The visitor centre is open Tuesday to Sunday, 10am to 4pm.

It’s more of a half day outing than a whole day – although it’s near Wiggley’s Fun Farm, Bridgend Miniature Railway (open once a month), Bryngarw Country Park, or even McArthurGlen designer shopping village, if you wanted to make a day of it.

Have you been to Parc Slip Nature Reserve? Do let me know on the Cardiff Mummy Says Facebook page, by tweeting me on @cardiffmummy 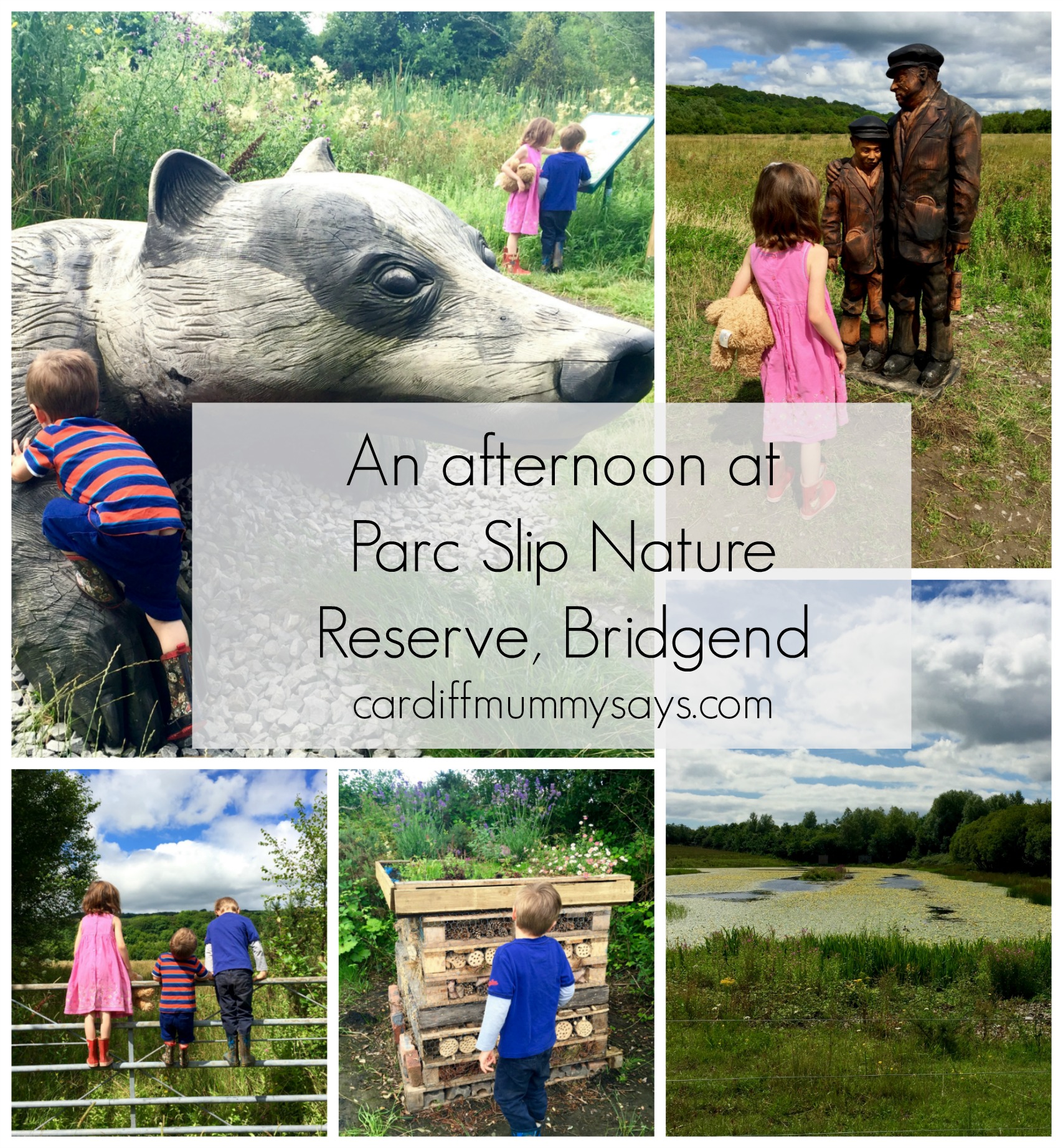