Almost Always Muddy is a wonderfully inventive and fully interactive show where children and their grown-ups create the set, props, characters and the storyline – meaning every performance is completely different and full of its own twists and turns.

The production opened today at Wales Millennium Centre for an 11-show run over the Easter holidays, with the action taking place in a specially constructed ‘story yard’ in the Glanfa foyer area (or outside if the weather improves!). 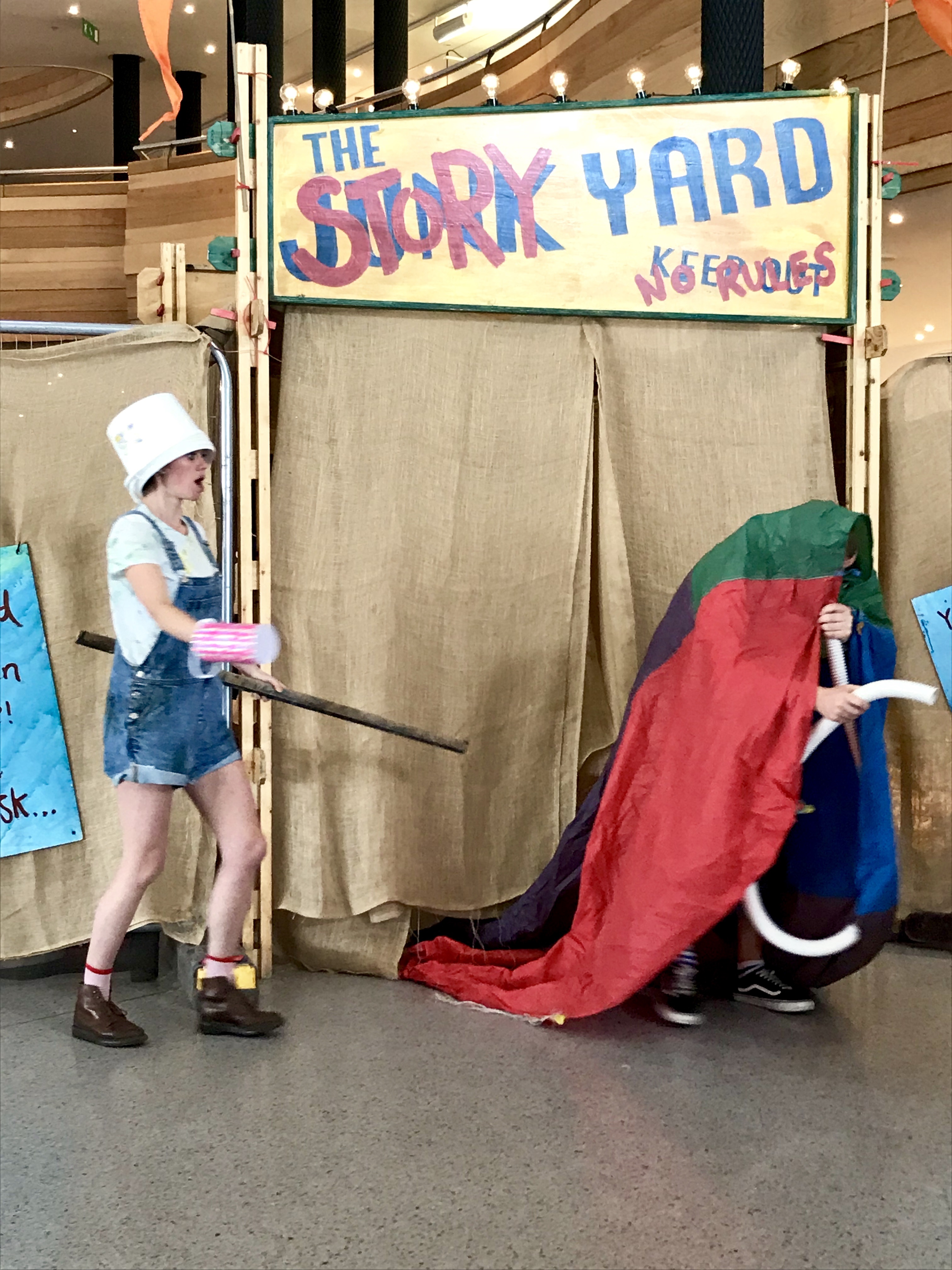 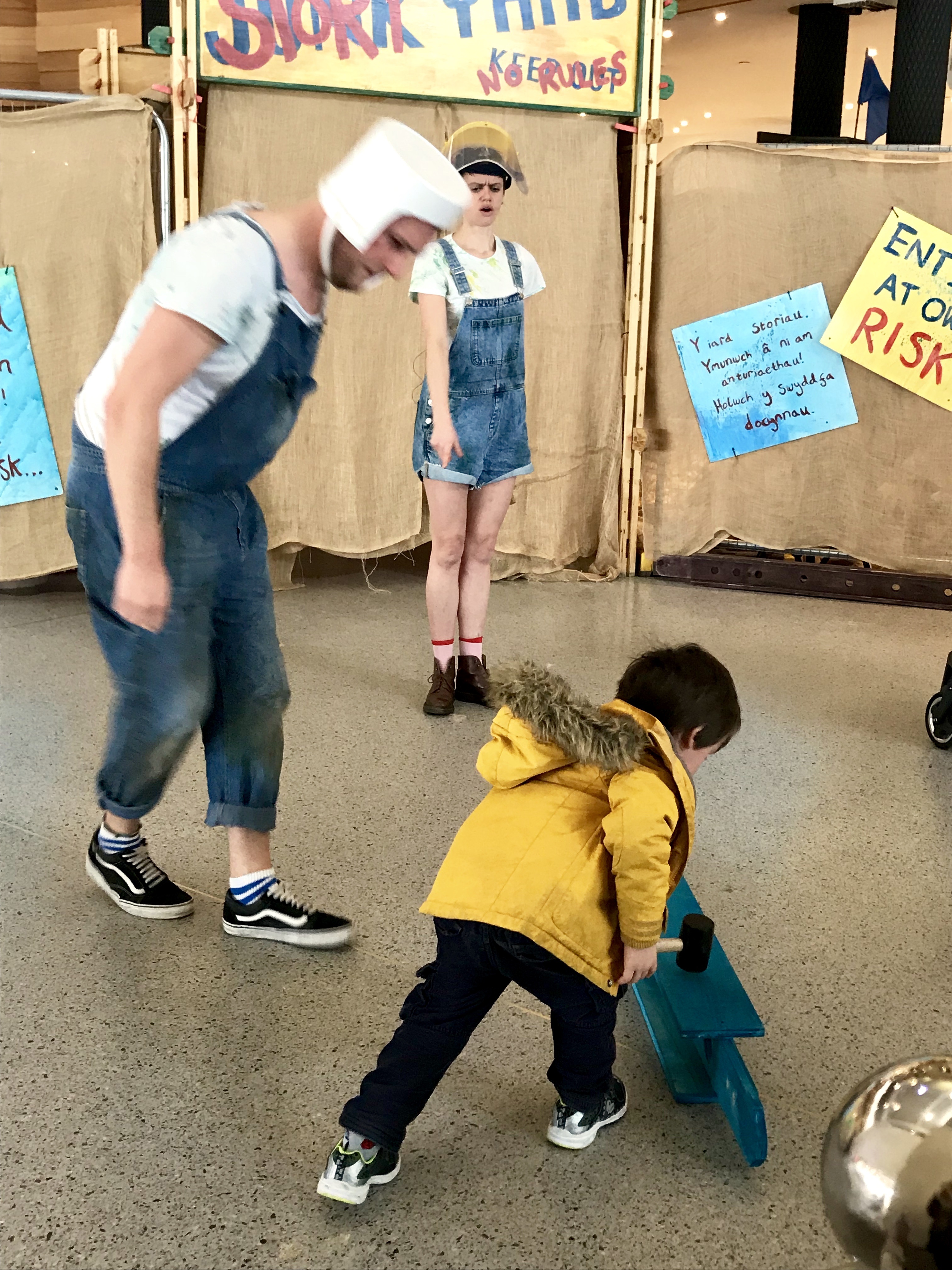 The action starts even before we enter the performance space as various characters burst in and out from behind the canvas walls with instruments and props. The audience look all kinds of puzzled and baffled – but mostly intrigued and eager to get involved.

We are invited into the story yard where the cast of five tell us that the wooden structures around the edge are different stations that will help form today’s show. A huge tarpaulin sheet is removed to reveal all manner of junk – old bicycle tyres, plastic tubes, bits of wood, material, plastic containers and lots more besides. 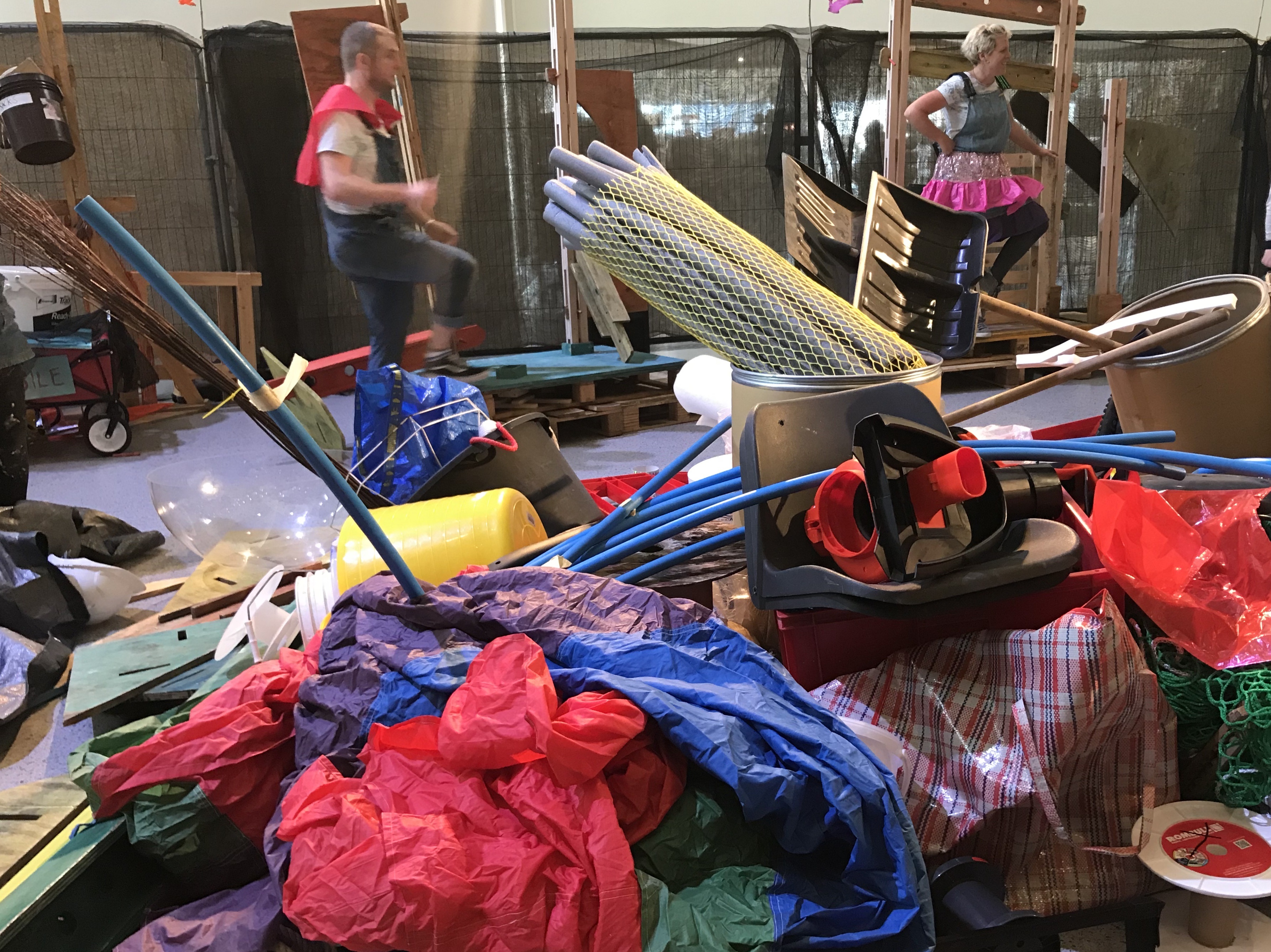 The children’s task is to use these bits and pieces in whatever way they see fit to create places, creatures and things to inspire the story. Little Miss E was inspired by a piece of green netting to create a poisonous sea creature while my two boys worked with some other children to create a flying house. 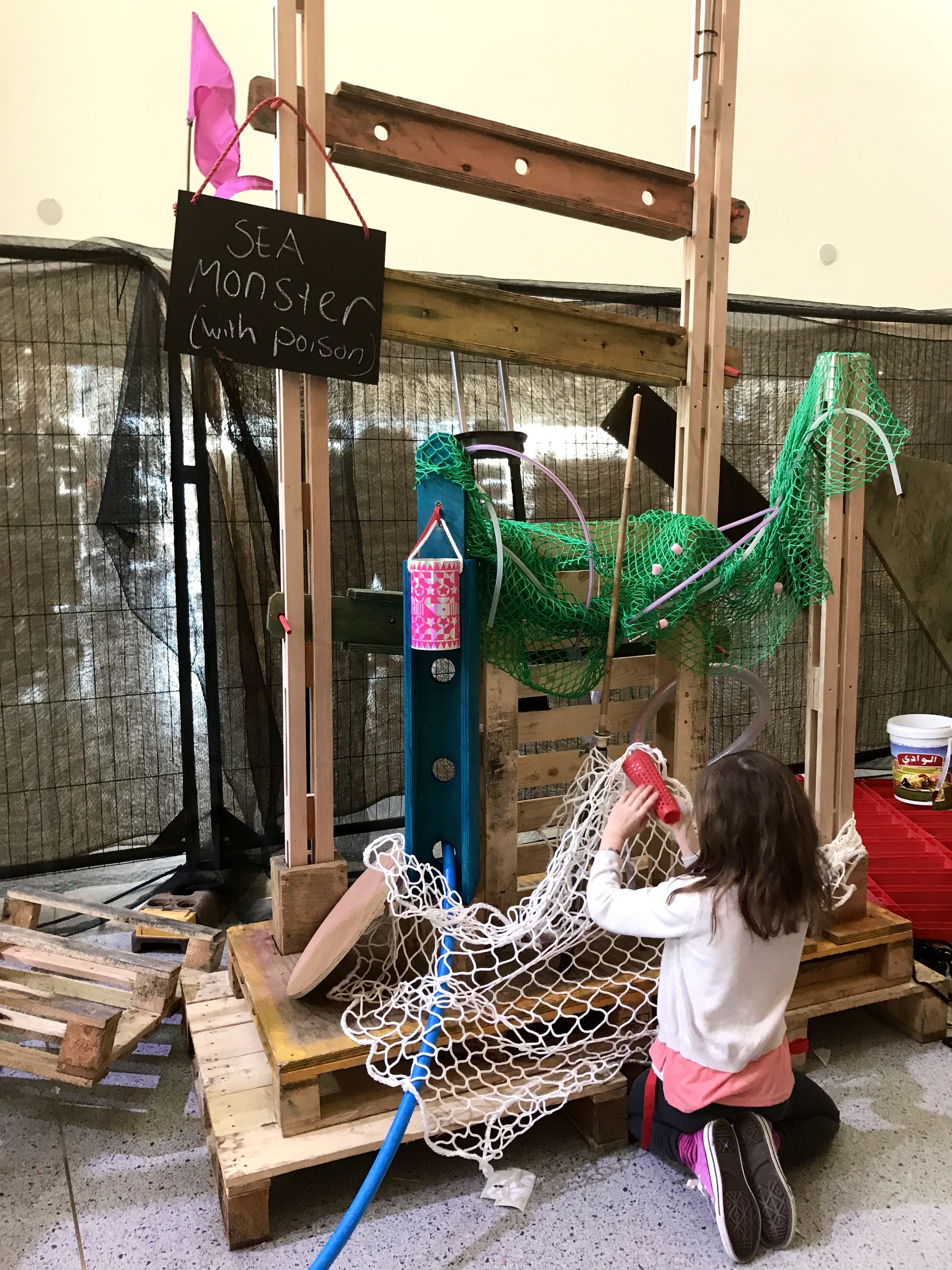 We grown-ups meanwhile are ushered into a separate curtained off area and asked to create our own prop for the story which will remain hidden from the children until later in the show. We were lucky to have a really enthusiastic group of parents with everyone working together equally and no one trying to take charge. Our dune buggy was pretty good even if I do say so myself. Importantly, the children seemed impressed! 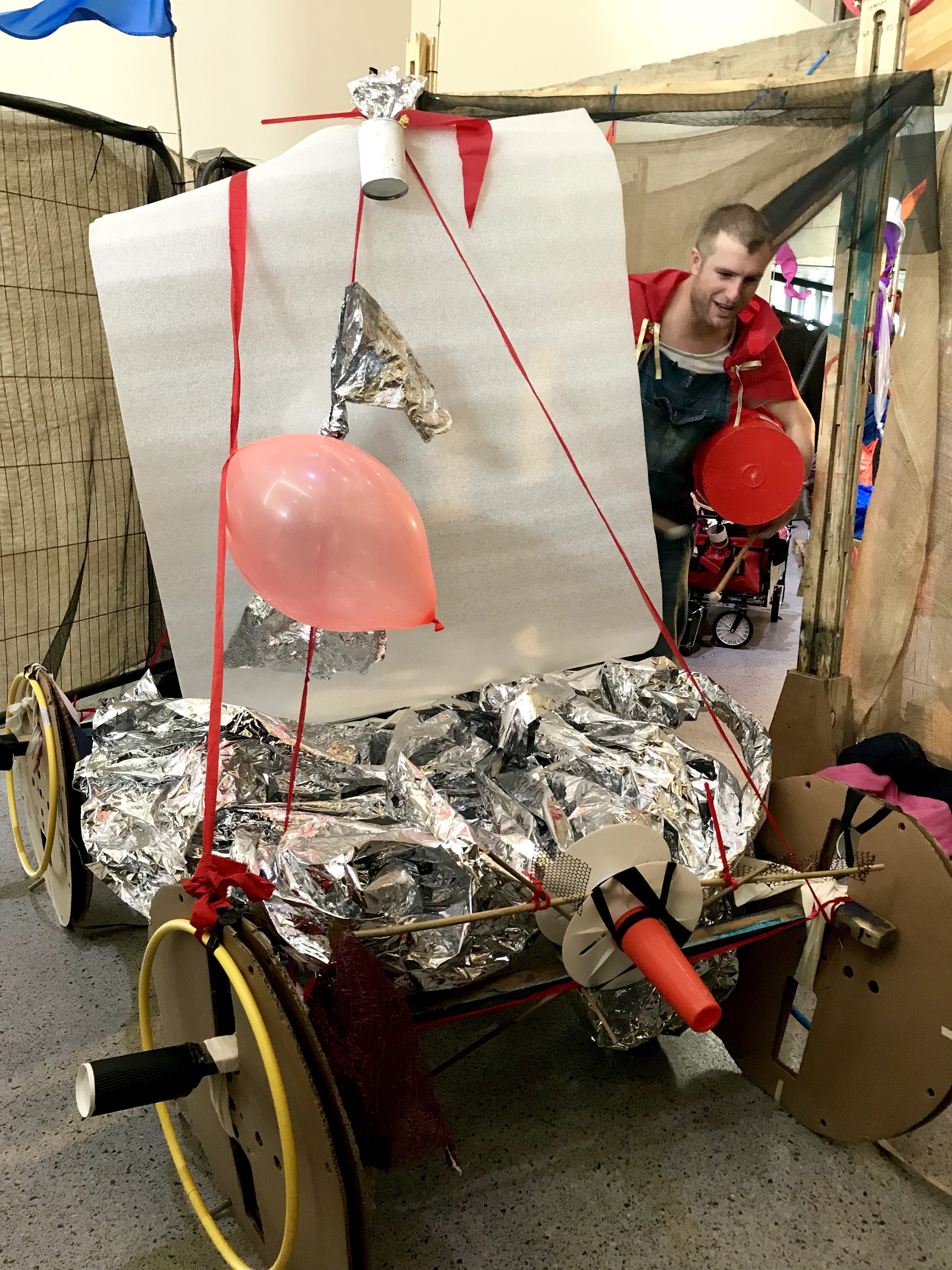 After half an hour or so both groups come back together and our story begins. We are introduced to Paper Bag Girl – the protagonist of all the Story Yard adventures and the only real thing the different adventures will have in common.

The rest of the show is inspired by the rest of the creations and suggestions from the children with the story evolving on its own accord. 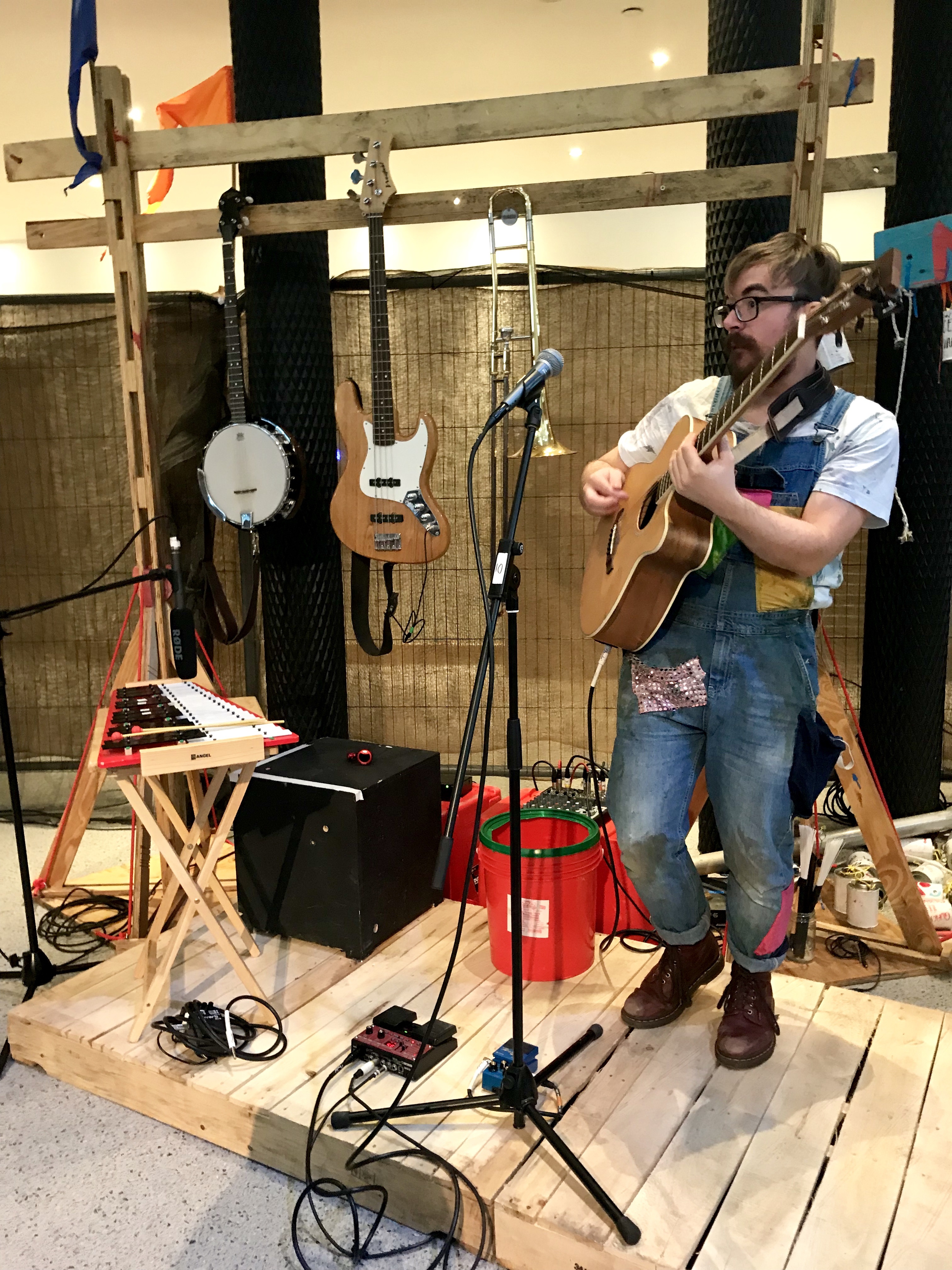 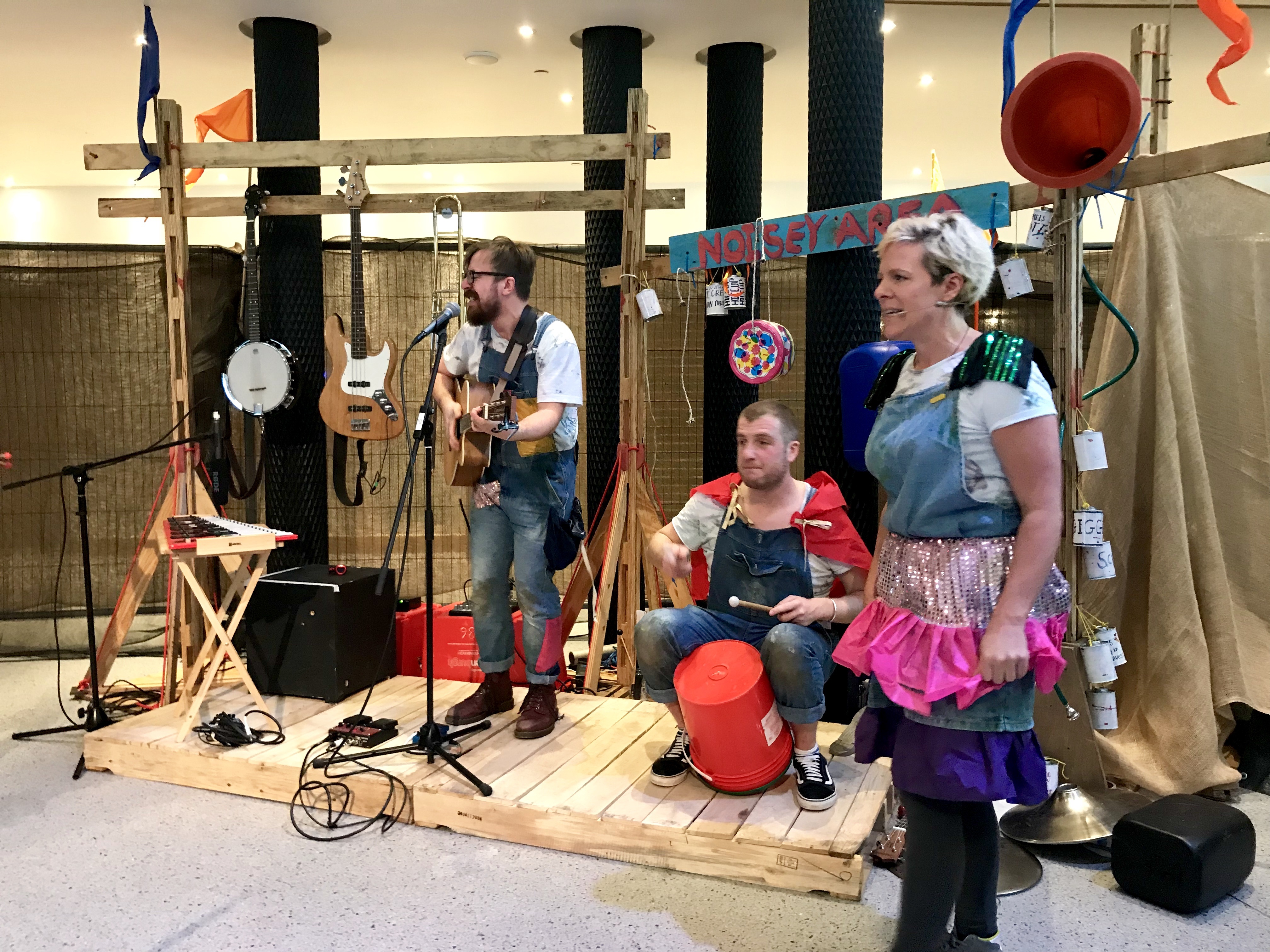 All five of the cast – Fi, Josh, Justin, Kirsty and Hazel – are enthusiastic very entertaining and great at improvising.

Musical accompaniment comes from Josh who throughout both the performance and the creating time. Fi is the puppeteer bringing Paper Bag Girl to life while Kirsty is in charge of costumes and props and helping with the puppetry. Hazel is The Story Wrangler who weaves everything together to create our tale.

Justin in particular stands out. He plays all the characters we meet along the way, quickly thinking on his feet as the rest of the cast and the audience throw new ideas at him and he adapts accordingly. He’s a sea creature, a wolf, a Scottish superhero and more as he flits from one character to another. 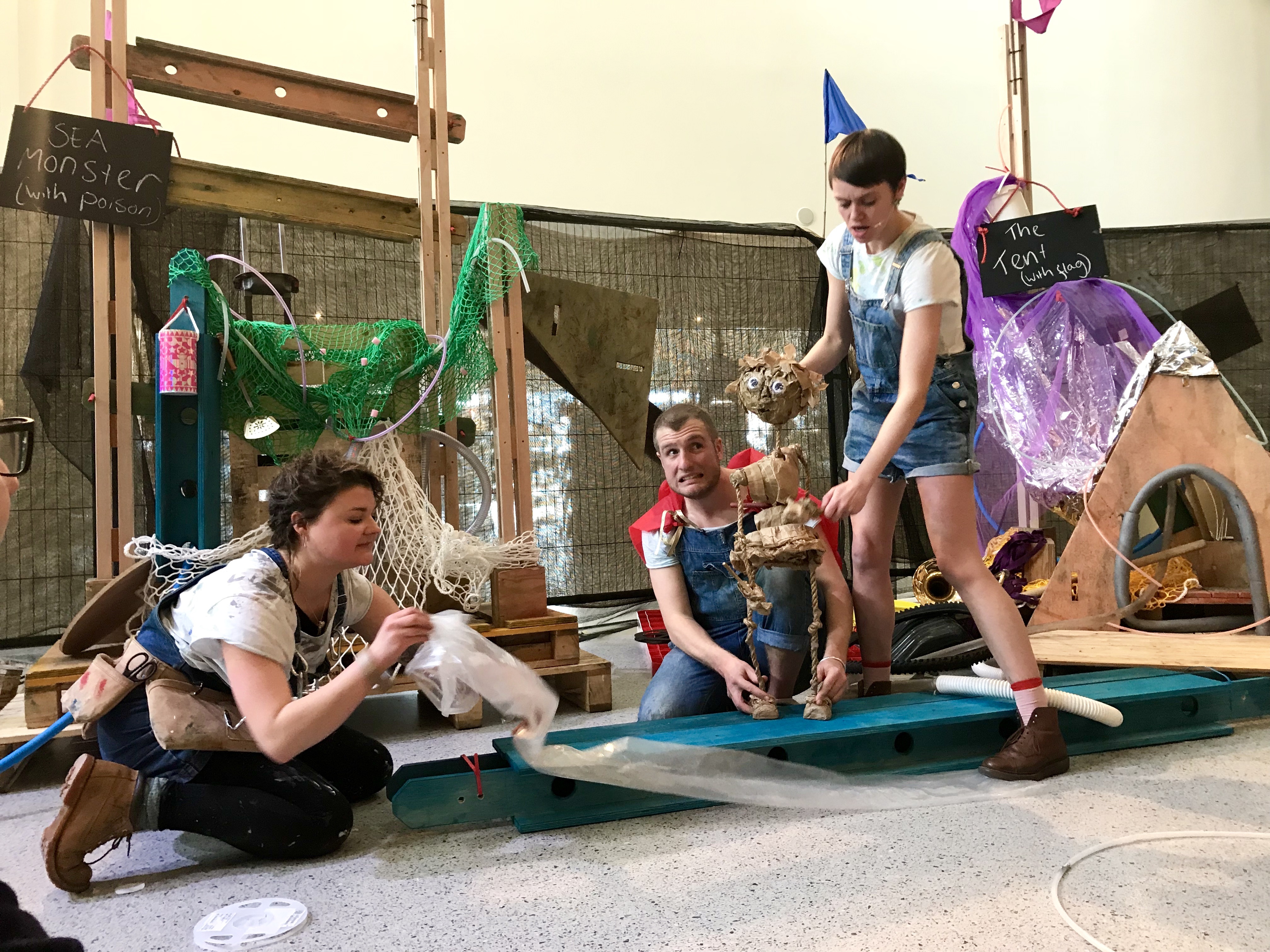 Almost Always Muddy – devised by Cardiff-based company Likely Story – won’t be to everyone’s taste. If you prefer a more passive theatrical experience where can sink back into your seat and let the performers do all the work then it won’t be for you.

However if you’re looking for something a little different that will inspire your children’s imagination and creativity – not to mention your own – then this is a brilliant experience which we highly recommend.

The age guidance is seven and above. My children are eight, six and a half, and four. My oldest two loved it and had such fun using their imaginations to create their scenes and props. 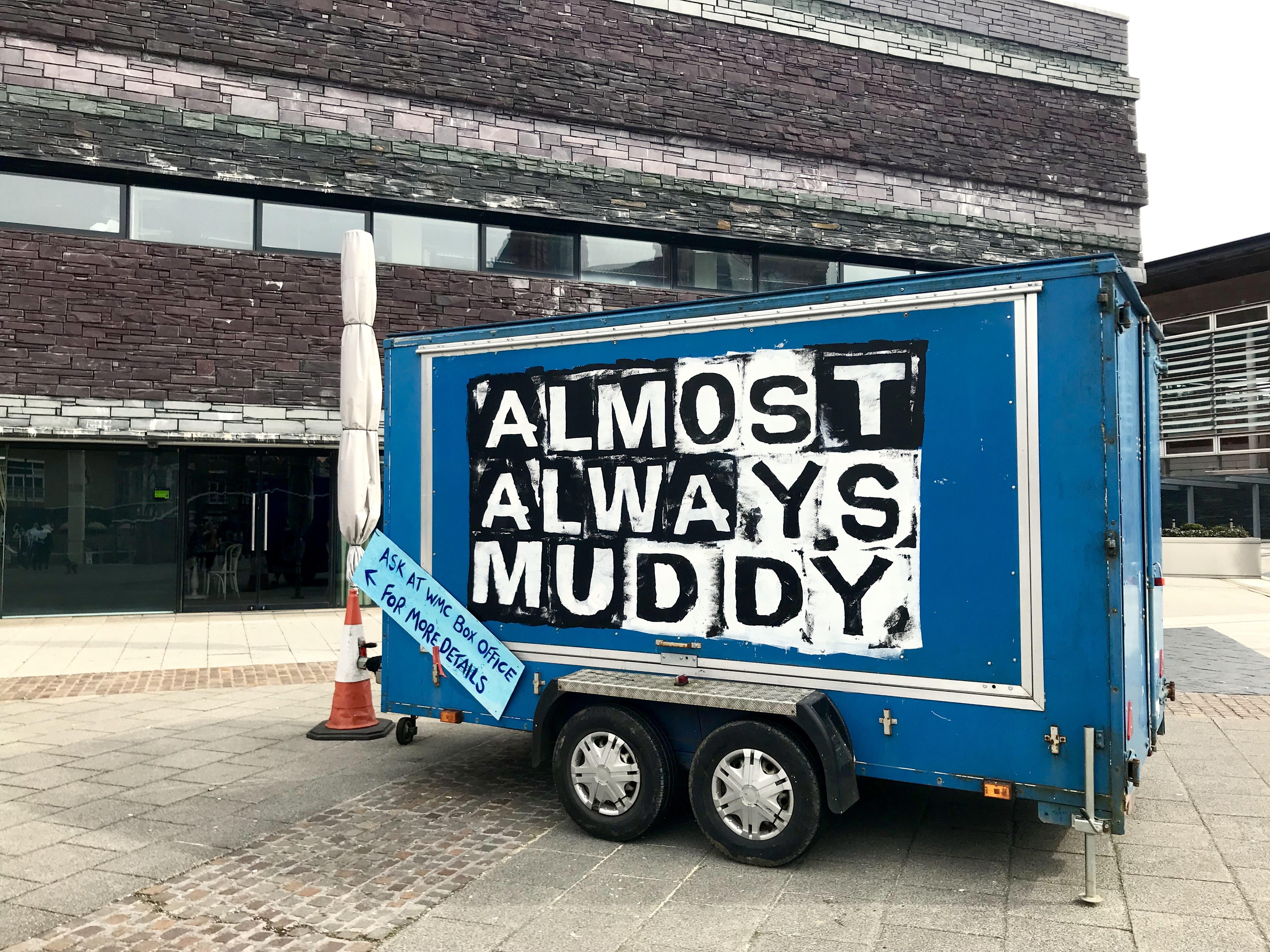 However I think my four year old was probably most enthusiastic of all. He was first to volunteer when the performers needed assistance. He had no qualms at being left when we parents went into our secret making area (we regularly checked through the curtains to make sure all three of them were okay). And at the end of the show he went right up to a couple of the performers and recapped the story for them, commenting that it was the best story ever. And how could anyone disagree?