My daughter didn’t believe me when I told her we were going for lunch in a book shop.

“You’re joking, aren’t you Mummy?” she said. “You can’t possibly eat food in a book shop.”

Because that’s exactly what you can do at Octavo’s Book Café and Wine Bar in Cardiff Bay. 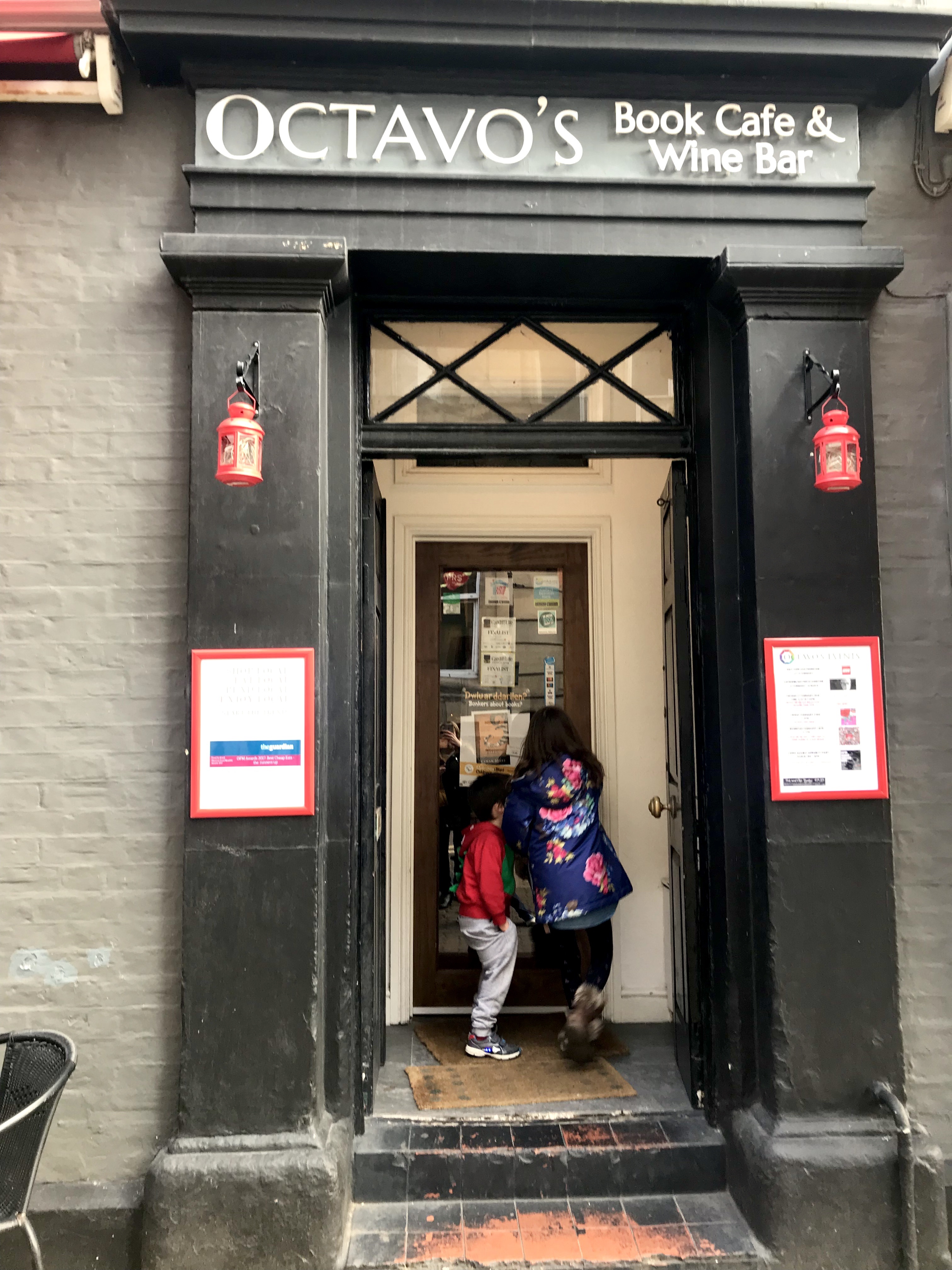 The quirky independent eatery can be found in a former coaching inn which dates back to 1839, making it the oldest building in what used to be Tiger Bay. I’ve wanted to visit ever since I heard about it opening in 2016 – and I finally made it along with my three children during February half term as part of our mission this year to support more independent cafes and restaurants. 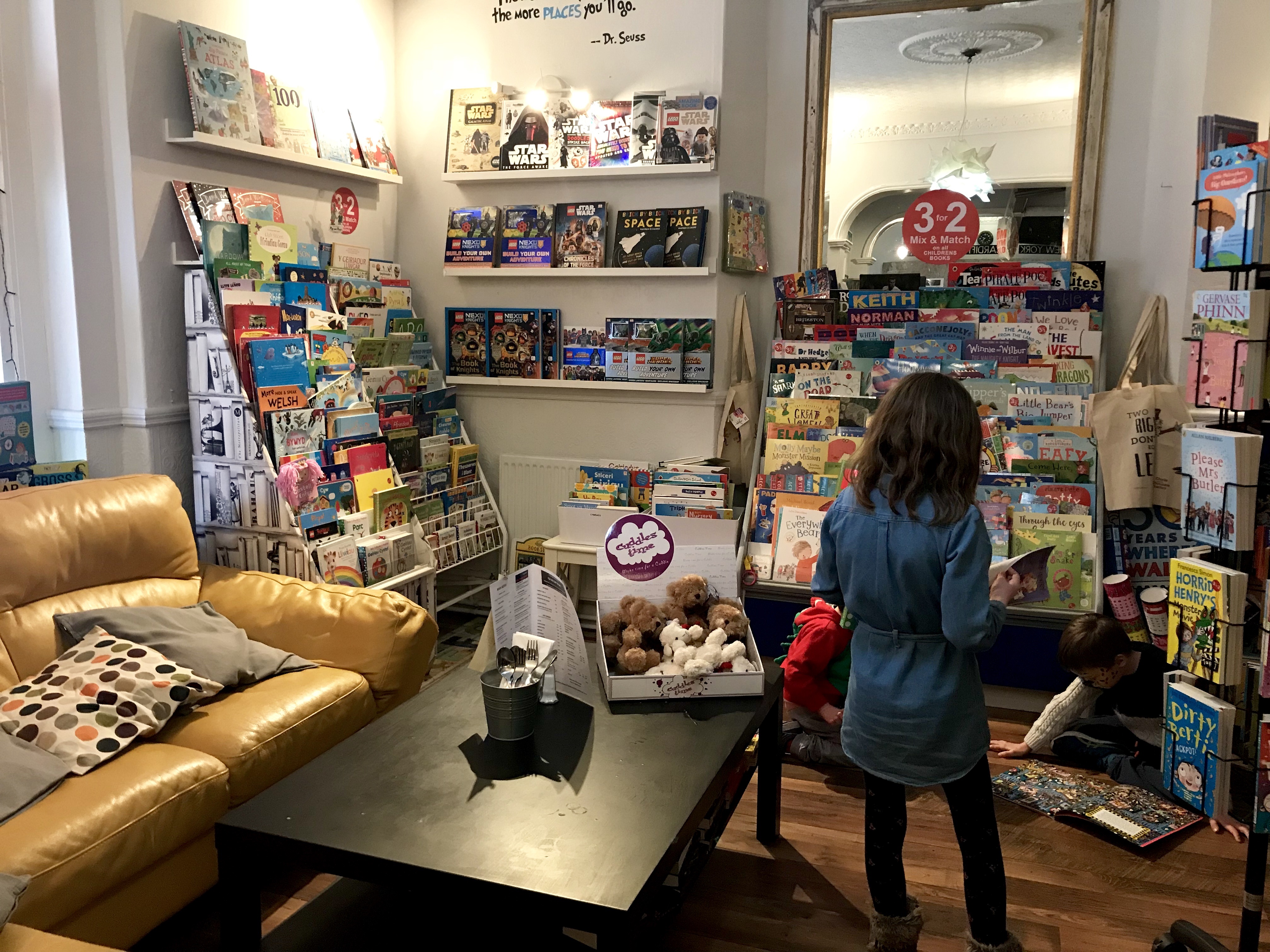 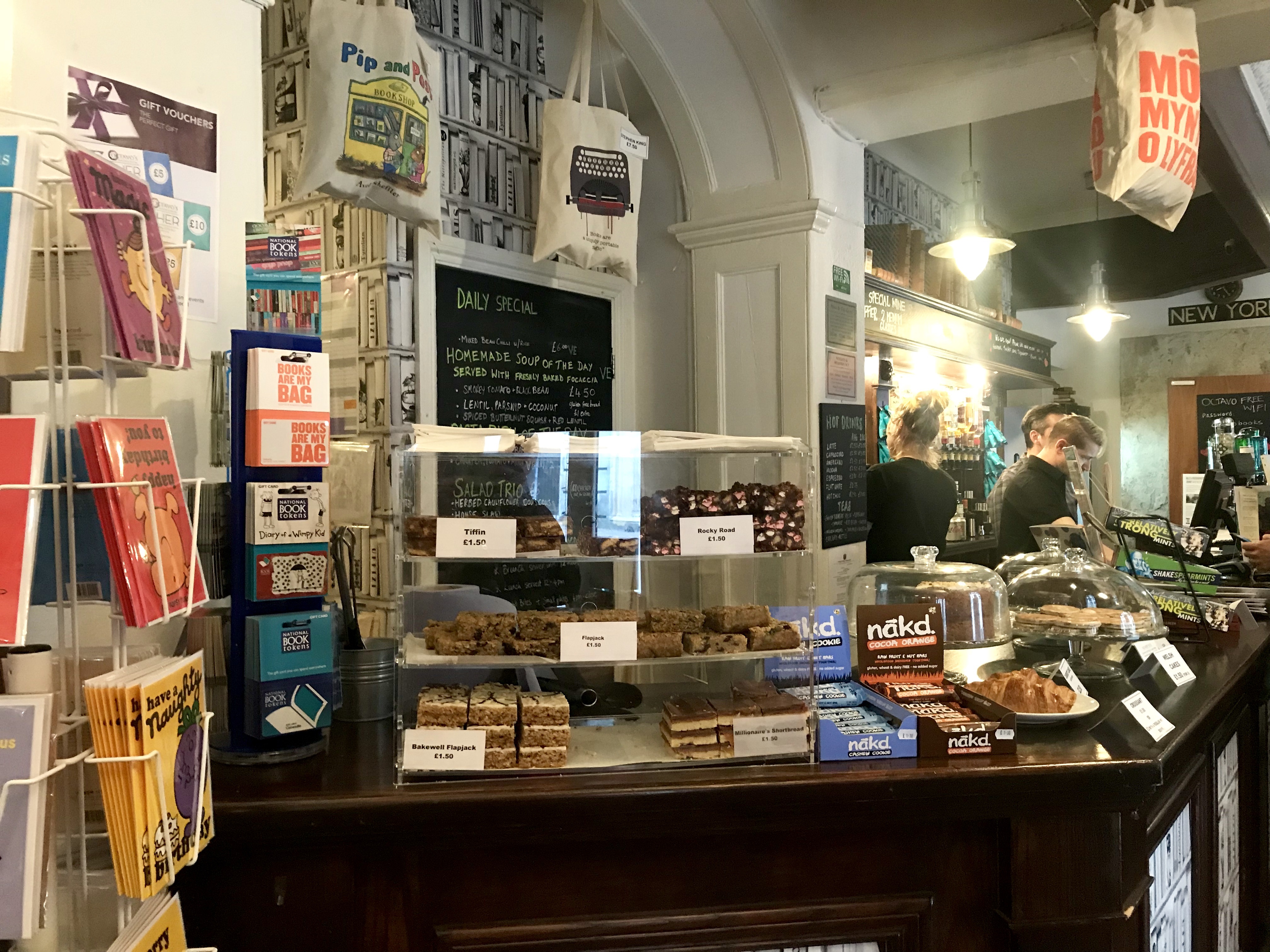 I honestly thought eight-year-old Little Miss E was going to burst with excitement when we arrived and she saw for herself that she was about to have her lunch surrounded by books. She is an utter bookworm and always has her nose between the pages of a book. Her brothers also love books… but not quite on the scale of my little real-life Matilda (the book-loving character from Roald Dahl… but I’m sure you all knew that!). 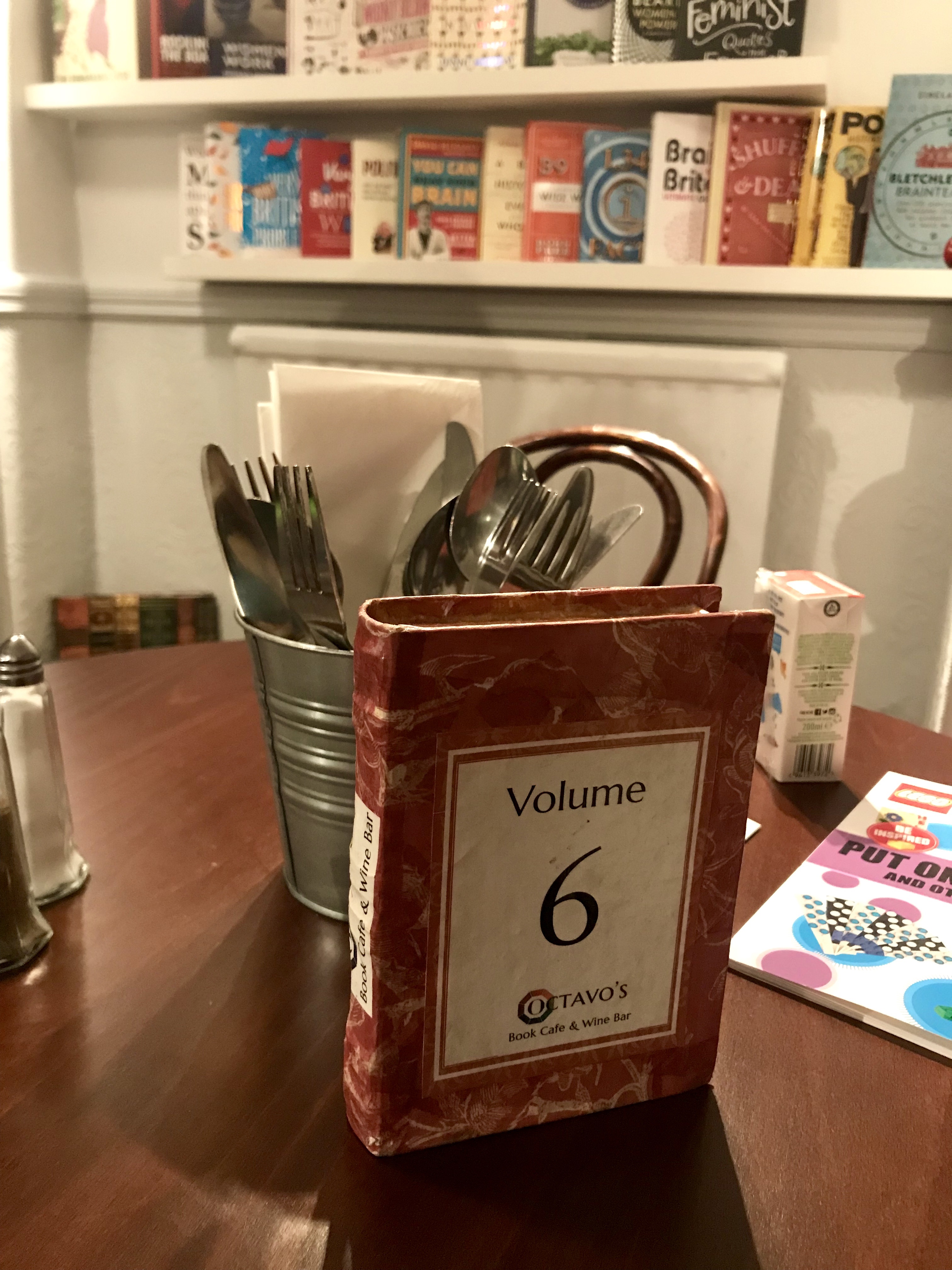 We arrived at around 12.45pm and it was a welcome tranquil haven away from the busy-ness of a sunny day in Mermaid Quay where we’d been to see the The Great Brick Safari of jungle animals made from Lego.

The place was nicely full but we had no problem finding somewhere to sit – a lovely table on its own surrounded on three sides by shelves of books. Miss E could barely believe her eyes. 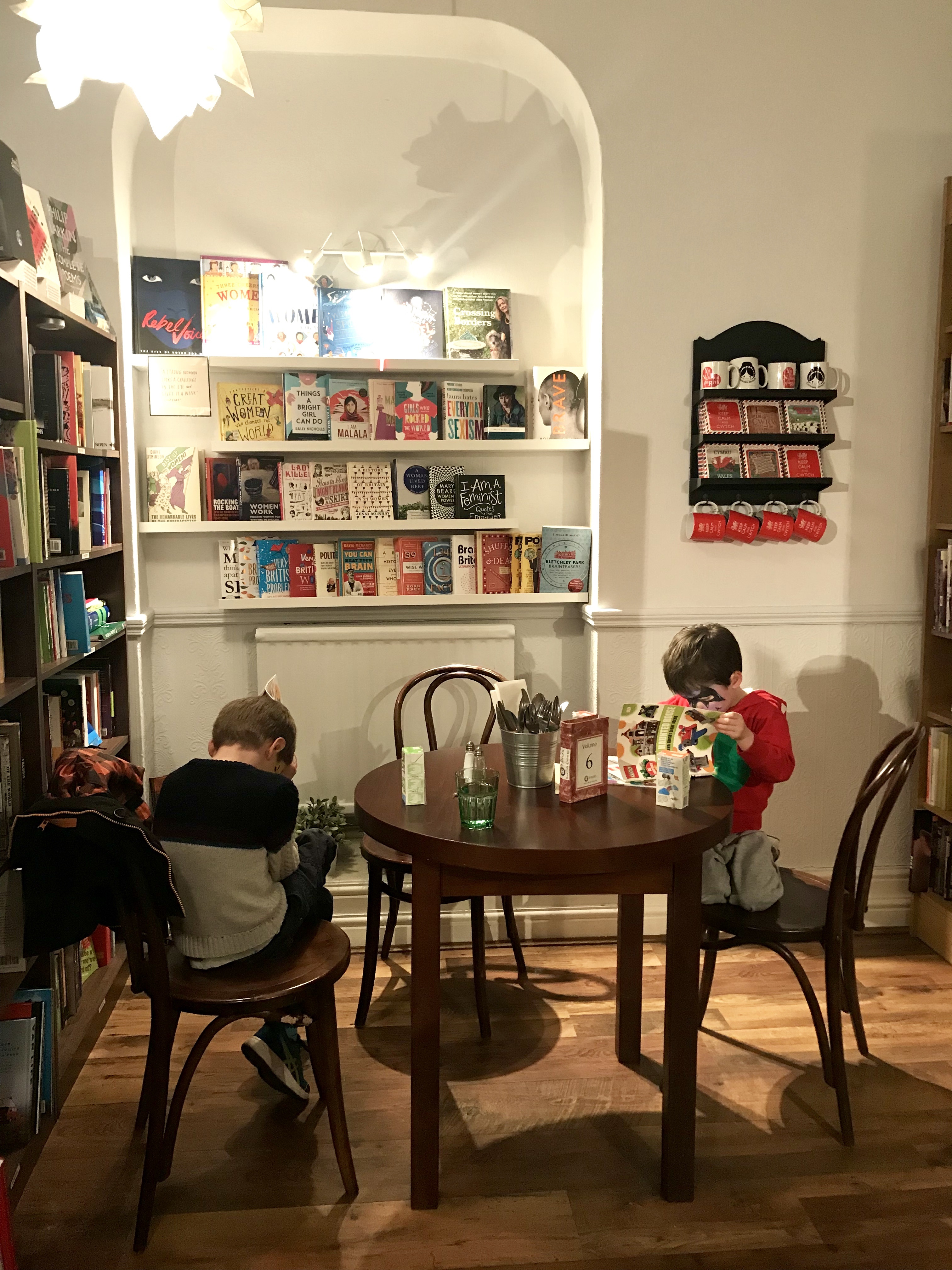 The menu and accompanying specials boards had a good choice of sandwiches, burgers, soups and salads with various vegetarian, vegan and gluten free options available. The chefs use Welsh produce where possible and lots of the food has a Welsh feel to it. Lunch is served between 12pm and 4pm with brunch available until 12pm and light bites and small plates from 4pm until close.

Both my boys opted for one of their all-time favourites – macaroni cheese. The portions were really generous although Little Man said he would have liked some more sauce. Miss E went for fish and chips – homemade battered goujons of fish accompanied by chips and with a choice of peas or beans. The third choice for young diners was chicken fingers and chips with all the children’s meals costing a very reasonable £4. 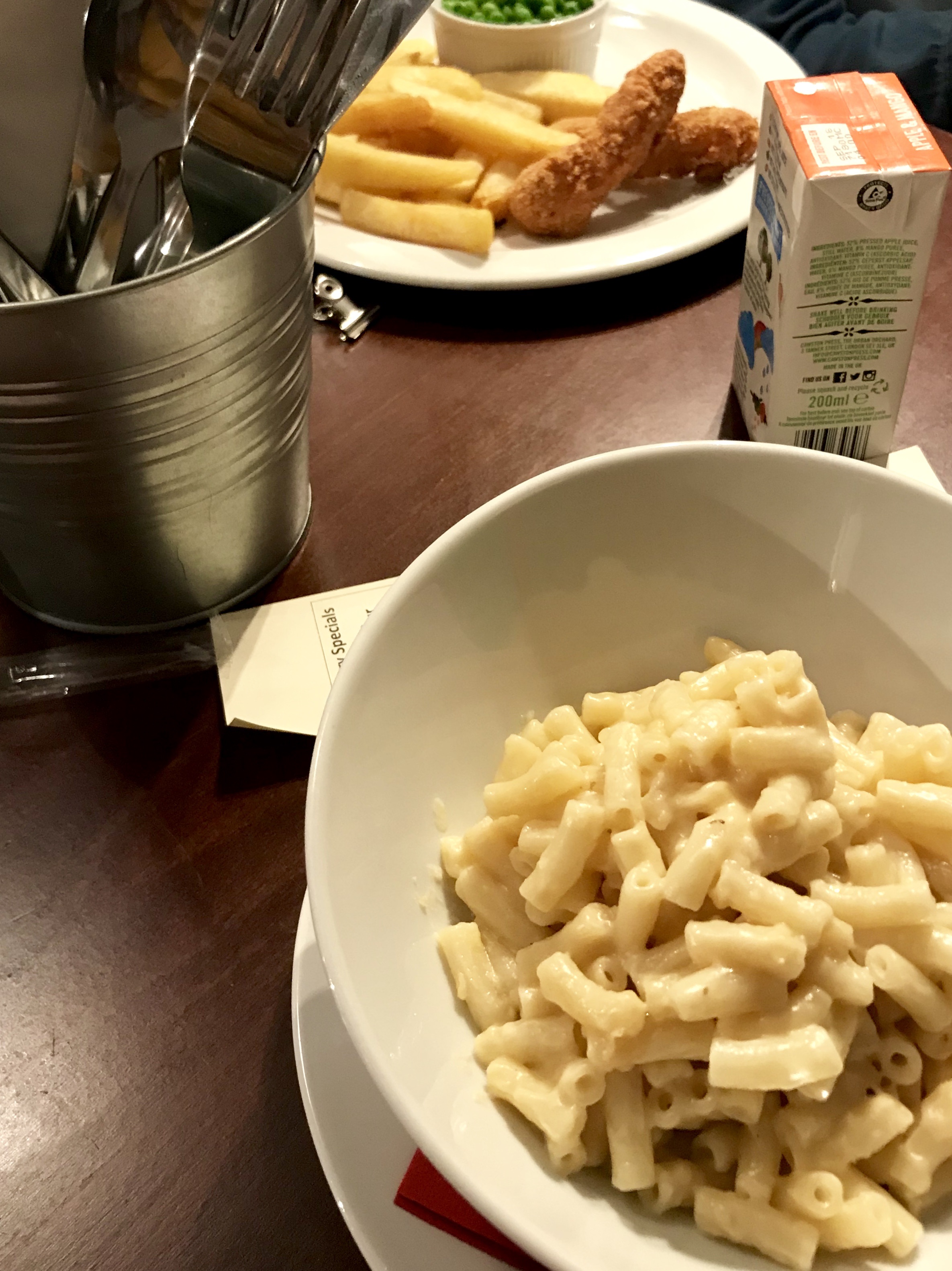 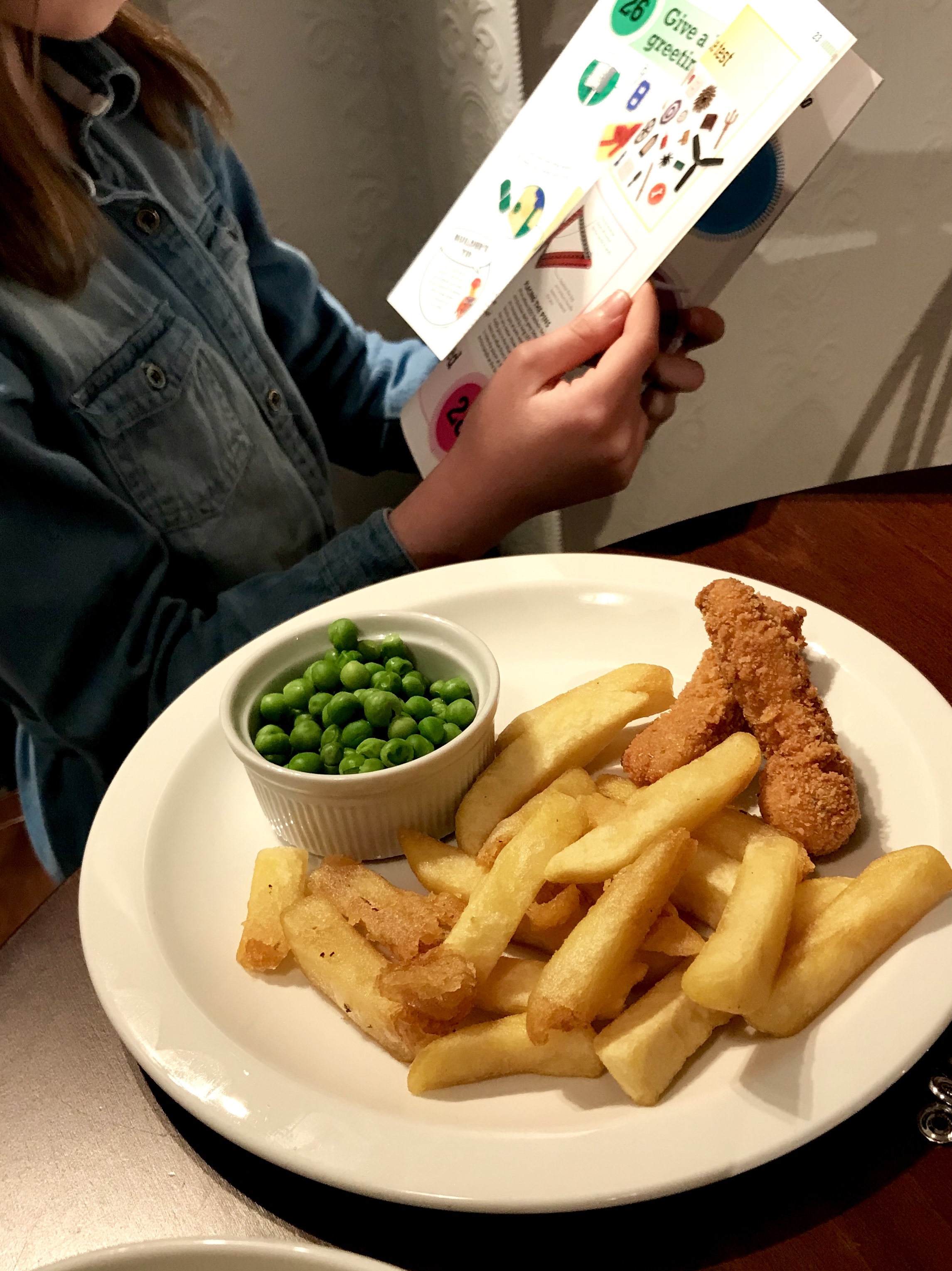 I was really tempted by the salad trio on the specials board but went instead for the Octavo’s Burger – a vegan chick pea, courgette and harissa burger served in a soft roll with red onion relish (£5.50). It was delicious. I’m a sucker for sweet potato fries so ordered a side of those too. 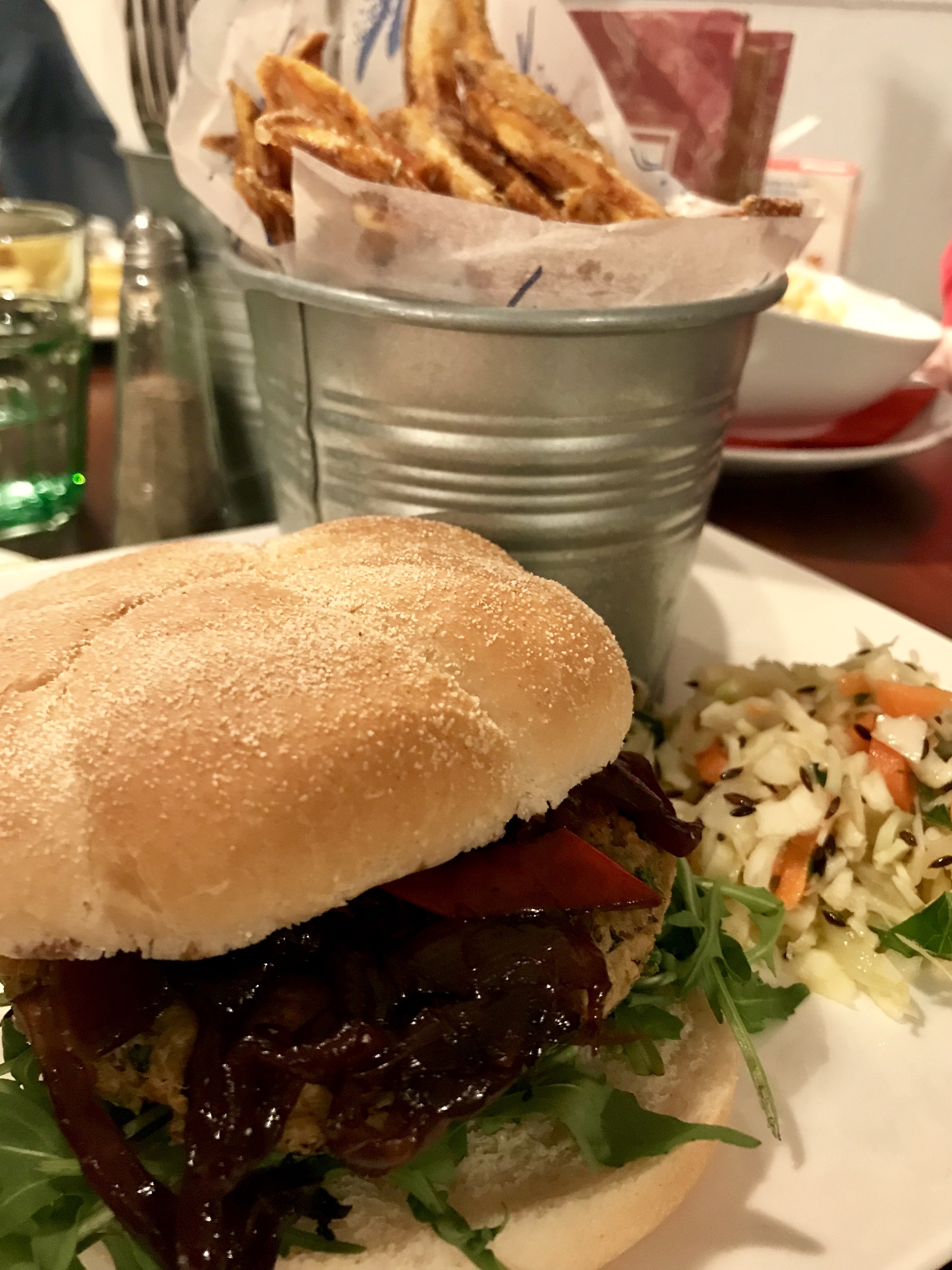 When we visited, Octavo’s were giving away a free Lego book with all children’s meals. We thought this was such a great idea as it gave the children something to look at while waiting for their food and it’s something far more useful than the usual plastic tat given away with children’s meals. It was especially great for my youngest as it took him a little while to understand that he couldn’t just sit and read all the books like at the library. All three of them had a few pounds of spending money for the school holidays and I was so pleased that they chose to buy a book each. This meant we got given a lovely free Octavo’s tote bag as we’d spent over the minimum purchase.

Octavo’s have a great children’s book section with Welsh and English language titles from picture books right up to teen literature. We were thrilled to see that during half term all children’s books were buy three for the price of two, which made their money go a little further.

I loved browsing the ‘grown up’ books too. It was great to see so many titles from Welsh publishers being promoted in the shop. They also stock lots of ‘alternative’ books such as gluten free and vegan cookery books and had a whole display of inspiring titles in celebration of International Women’s Day. 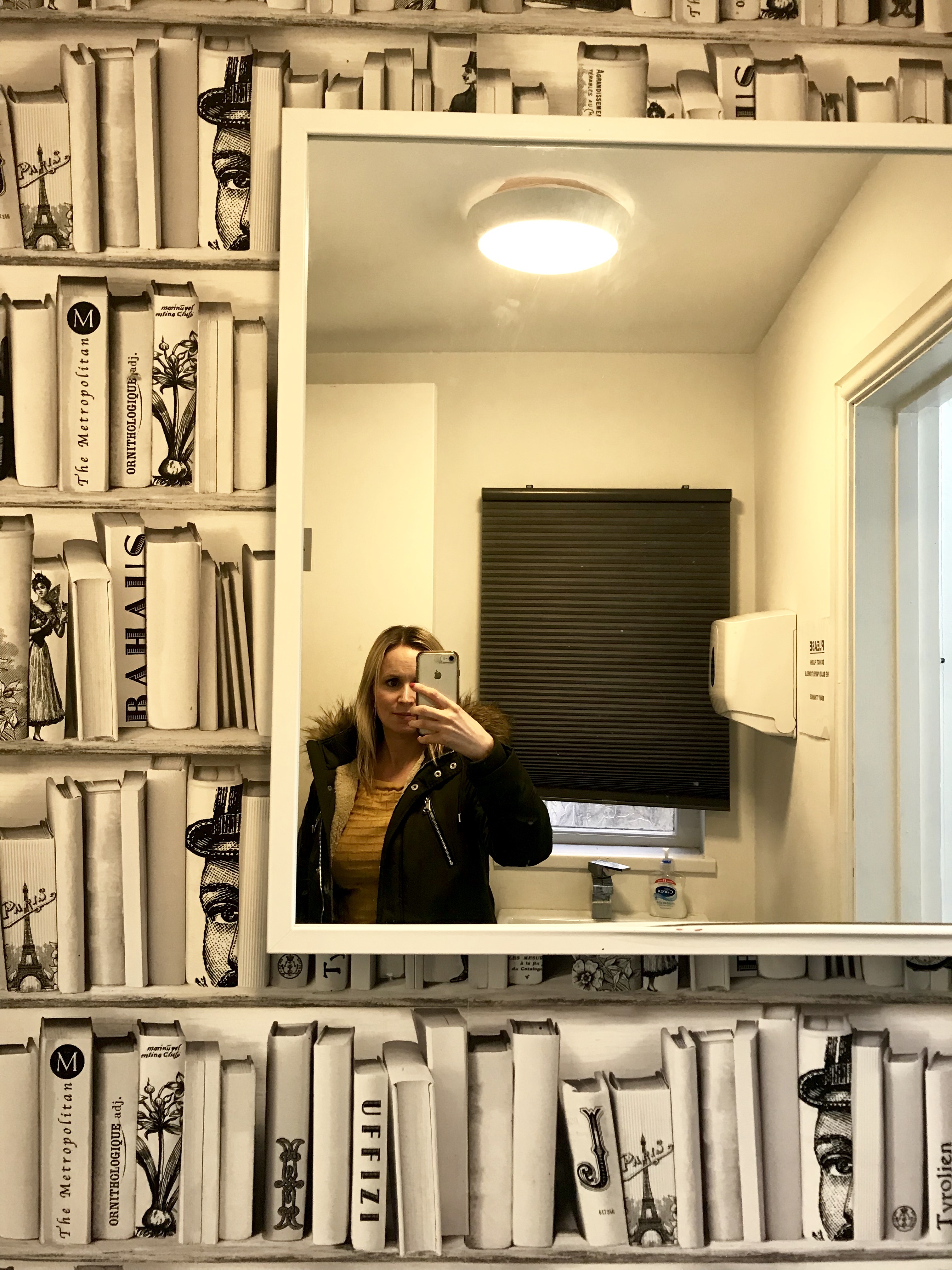 We loved all the quirky book-themed signs and posters around the shop and also the wallpaper in the toilets. Miss E asked if we could do the same at home.

We absolutely loved our much overdue first visit to Octavo’s and will definitely be back. They serve wine too so perhaps one day I’ll be back minus the kids! 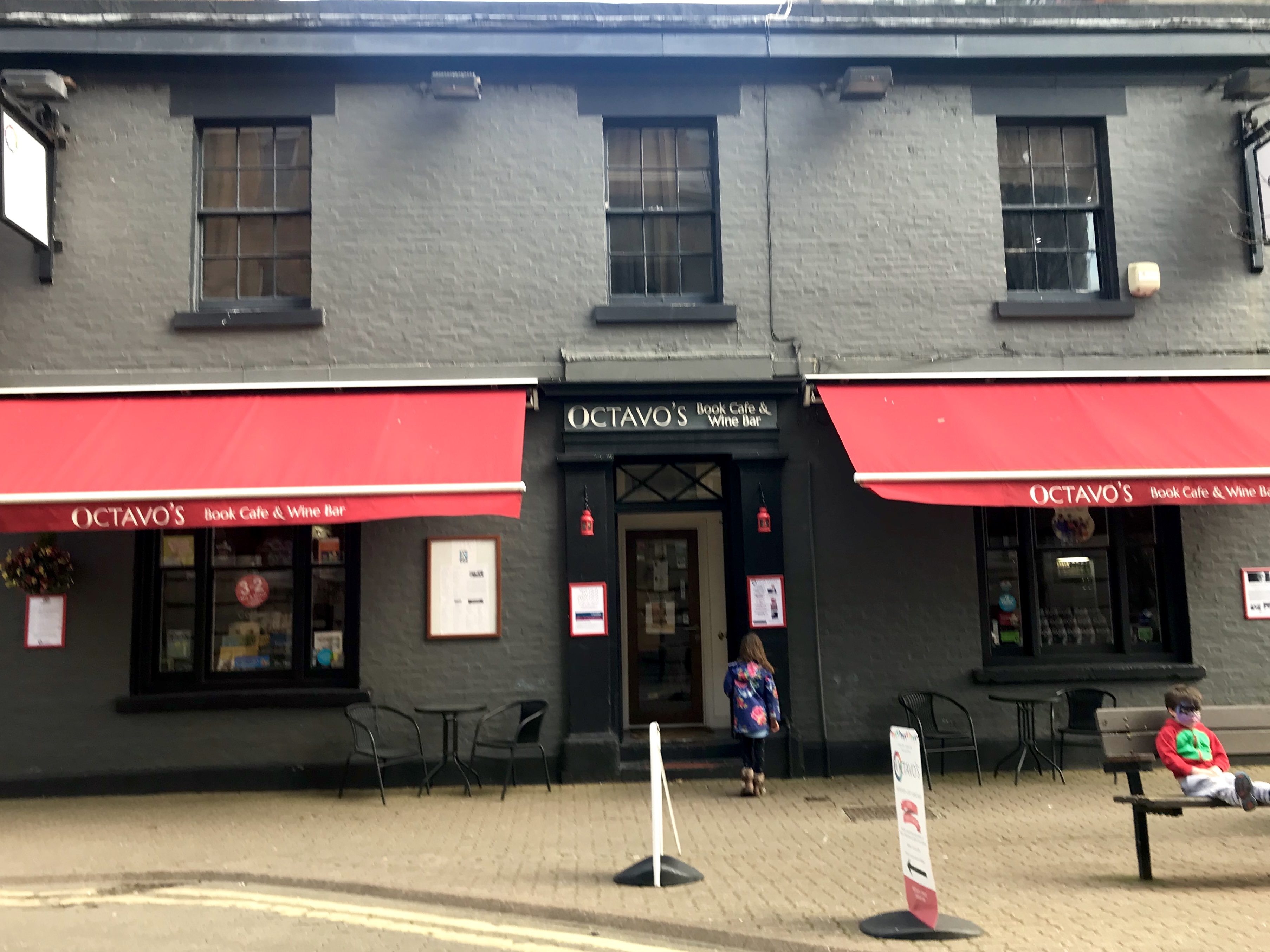 Have you been to Octavo’s? Let me know your thoughts in the comments below; on the Cardiff Mummy Says Facebook page; or you can tweet me on @cardiffmummy 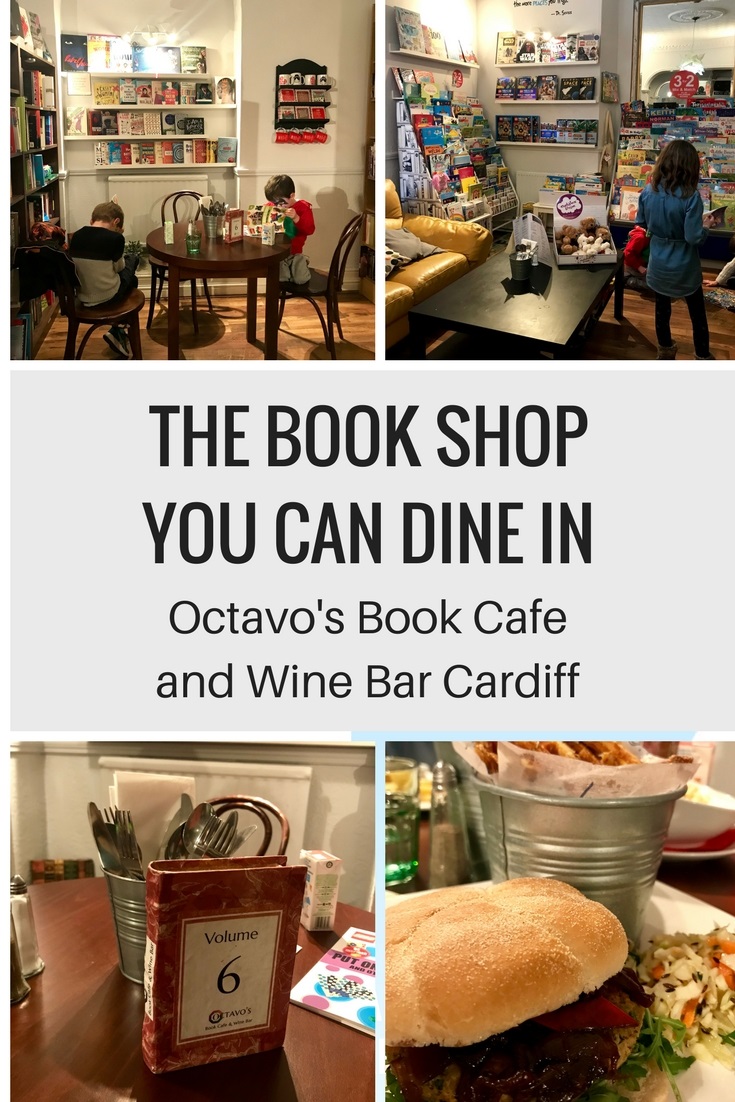