You know what it’s like. Your child has only had their latest pair of shoes for a couple of months but they’re already too small and the last thing you want is their teeny tiny toes getting all squished and deformed. But children’s shoes are so expensive and they soon require multiple pairs – for school, for PE or rugby/football, party shoes, sandals, wellington boots… So when Brantano Cardiff Bay invited my little ones along to put their new fitting machines and shoe fitting service to the test, in exchange for some shoes, I said a big fat yes and got there as soon as we could. 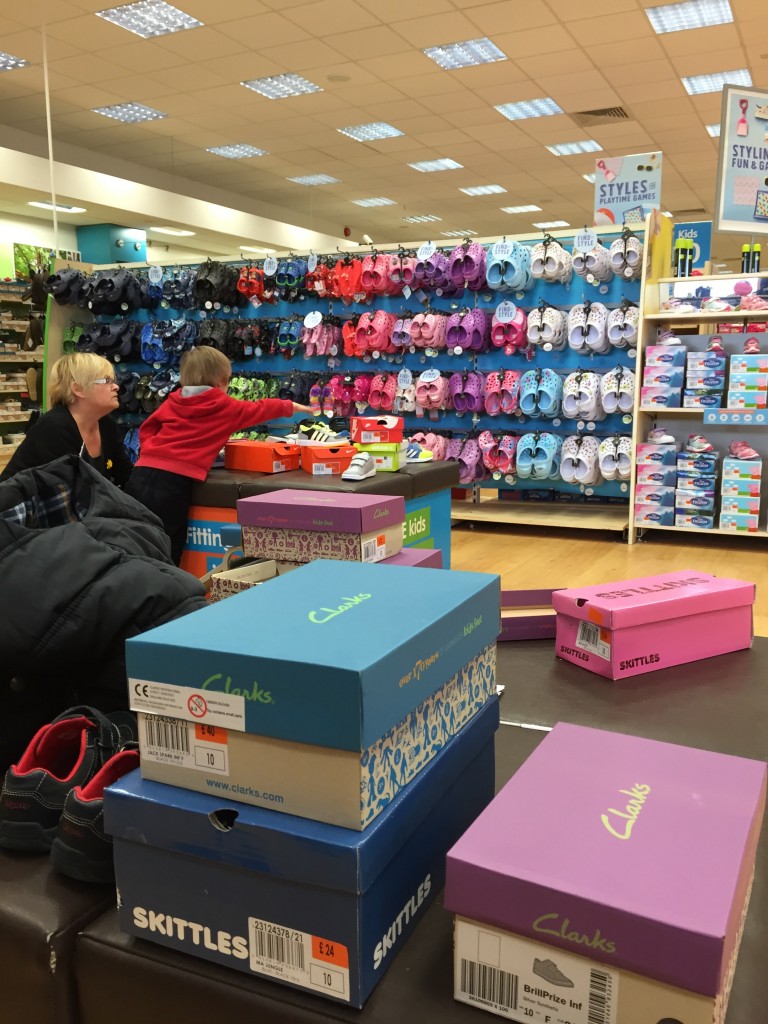 I’ve only been to Brantano once a few years ago and, I’ll be honest, it wasn’t the best experience as we couldn’t find the sizes we needed and left empty-handed. However, I’m pleased to report that our visit last weekend was a lot more successful and the store has upped its game when it comes to children’s shoes.

Their shoe department is large for a start. It takes up about a third of the store, which is situated in the Cardiff Bay retail park, near Asda. It’s also spacious, meaning you don’t feel like you’re getting in the way if you have multiple children or a buggy. Shoes are displayed in separate areas for younger and older children, and there’s a good seating area for trying on shoes too.

We were greeted by Jane, who has worked at the store for three years and who was great with my children, five-year-old Little Miss E and three-and-a-half-year-old Little Man O. She gave them stickers to start with, which is always a good way to win over a child. After asking a bit about what we were looking for (school shoes and trainers for Little Man O and party shoes and canvas pumps for Little Miss E), she measured their feet with the traditional measuring board and also the Clarks computerised one, which is new in to the store. 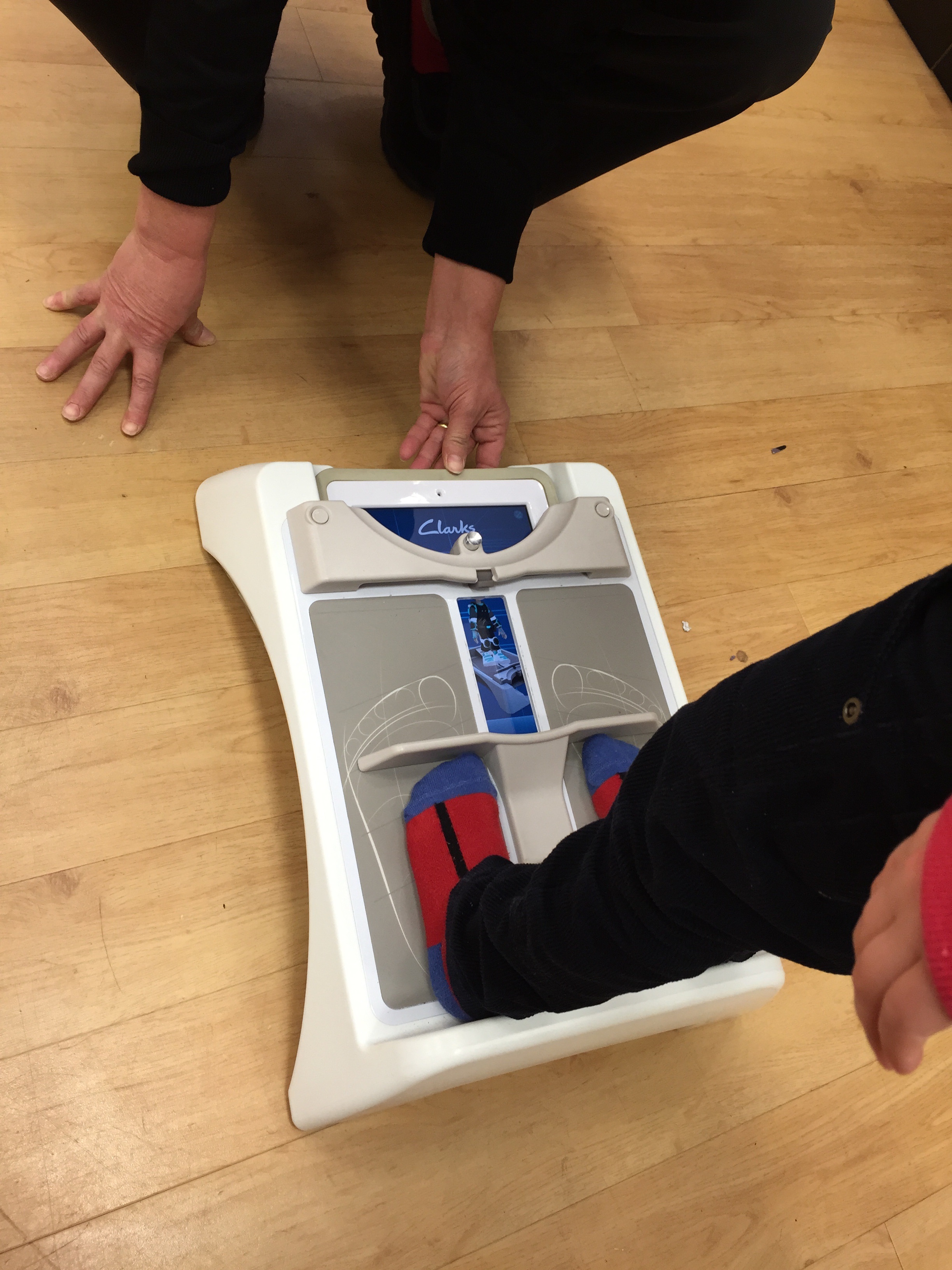 Thankfully both machines gave the same size – both of my children’s feet were a 10F. There’s 21 months in age between my eldest two but as Little Miss E is petite and dainty and Little Man O is tall for his age, they’re pretty much the same height, weight and – as of last weekend – shoe size. Little Miss E’s feet hadn’t grown since she was measured in January thank goodness but Little Man O had gone up a whole size. 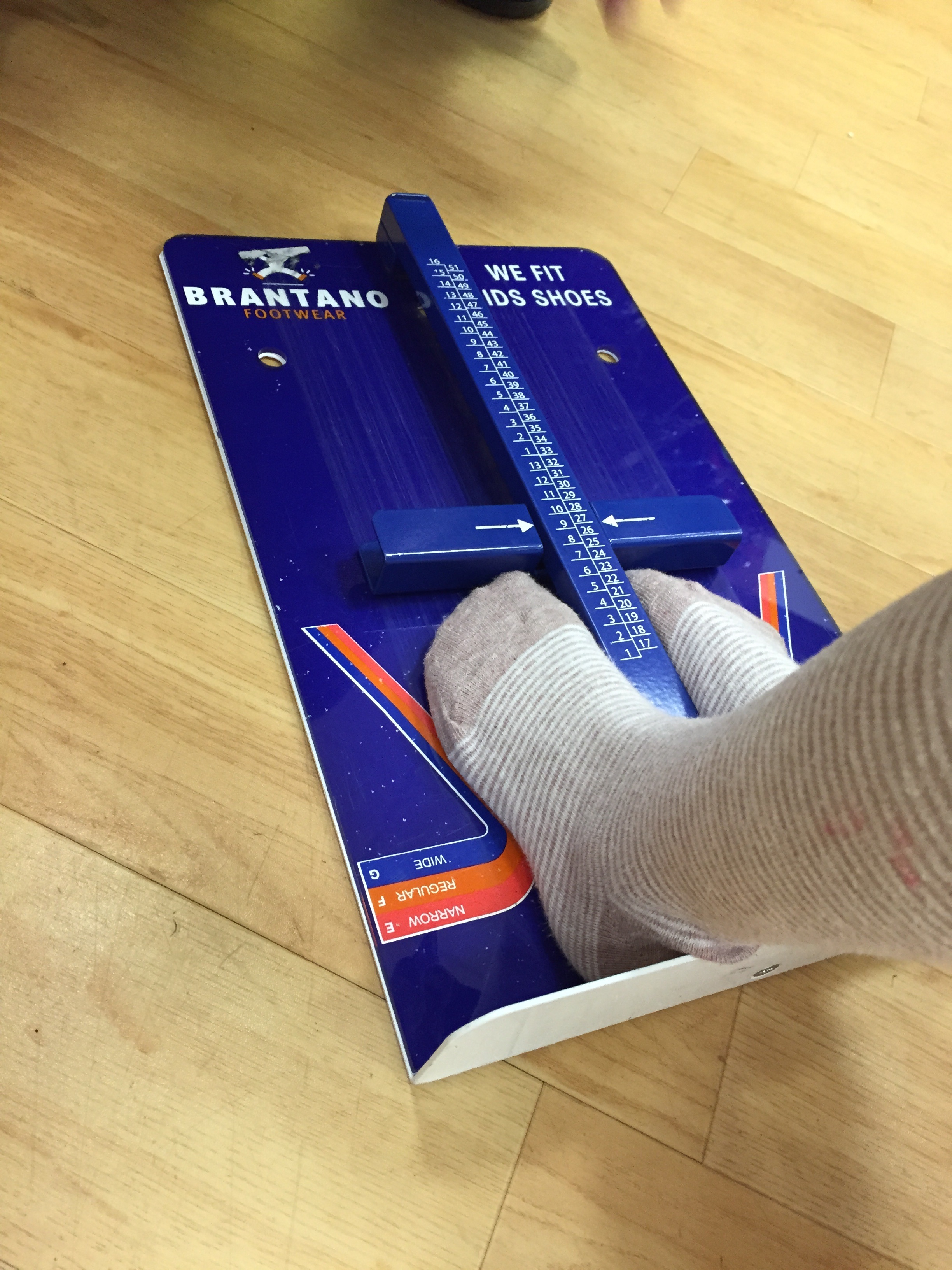 One thing that slightly disappointed me about the fitting was that my children were not given a choice as to whether they would prefer the girl character or the boy character on the Clarks computerised fitting machine. We’ve used this machine in Clarks stores previously and, as it happens, they both chose the character in their own gender, but it was their choice. I know it’s only something small but I feel uneasy about enforced gender stereotypes at such a young age.

With their sizes established, Jane took us to look at the shoes. Most shoe shops have one shoe of each style on display, and then the shop assistant will go to the stock room to see whether it is available in the size you need. At Brantano Cardiff Bay, and I presume all Brantanos, each shoe size has its own shelf area filled with everything available in that size, so my children could instantly see what was available to them.

I should probably tell you here that I’m a bit of a snob when it comes to children’s shoes. Other than the odd pair of summer sandals, I’ve always bought them Clarks. This is partly because they have narrow feet, and Clarks do a range of width fittings so I know their shoes will properly fit, but also because I worry that cheaper shoes won’t support my children’s feet as well. 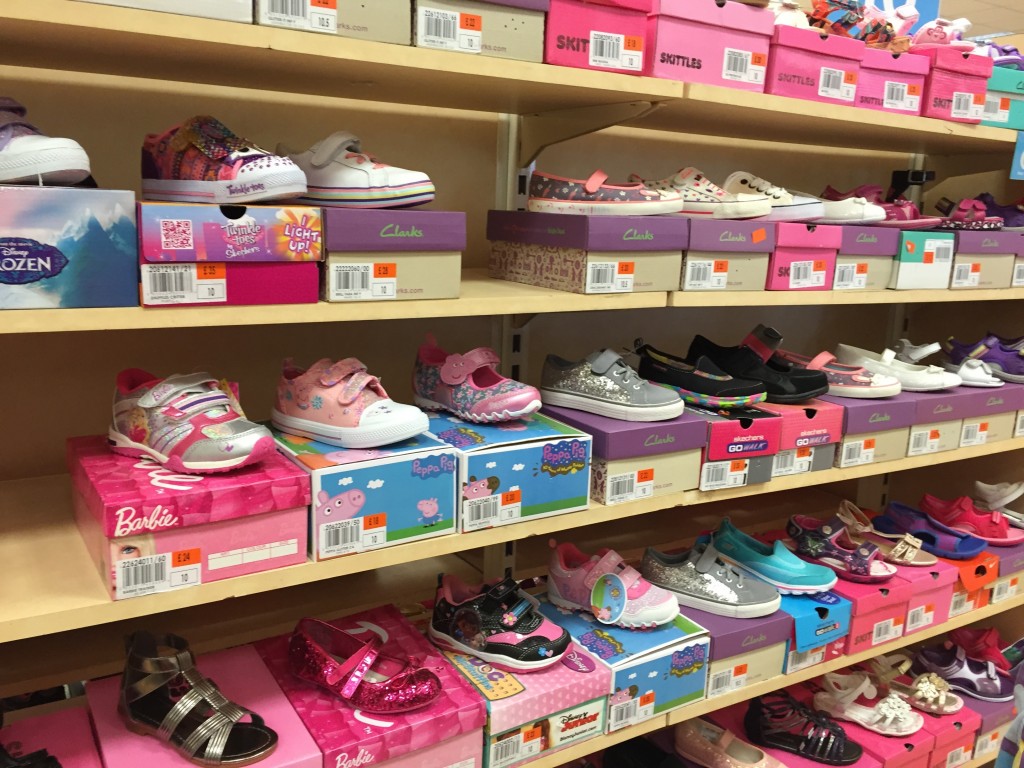 I knew that Brantano stocked Clarks, but our past experience was that it was hit or miss as to whether they had the size you needed or not. This time we didn’t have any problems finding the sizes we needed in a variety of styles, and there were lots of different shoes available in Brantano’s own brand Skittles, as well as well-known brands including Start-Rite, Nike, Adidas, and ‘character shoes’ featuring the likes of Peppa Pig, Frozen and Cars. They also had lots of slippers, wellington boots and Croc-style sandals, as well as a good selection of ruck sacks, bags and lunch boxes, adorned with a host of favourite characters.

Jane was happy for my children to try on as many pairs as they wanted to and for them to walk around in them for comfort. As I mentioned, my children have narrow feet, so they struggled with some of Brantano’s own line of shoes and other brands which do not offer different widths. However, I was pleased that Jane told my children when shoes were too wide for them, and why this could be bad for their feet.

I was keen for Little Man O to get some school shoes, as he attends pre-school every afternoon and we now knew his current pair were a size too small. He was instantly drawn to a pair of black Clarks with Velcro straps. I think the main reason for this choice was because he knew his sister’s school shoes had a hidden flap in the insole area, in which a tiny toy car was hidden, and he quickly realised this pair did the same. He also needed trainers for PE at school and rugby. He tried on a few styles including Clarks, Nike and Adidas, but settled on a blue and black Skittles pair with flashing lights (kids sure love flashing lights on shoes).

Little Miss E was desperate to get some new party shoes as her current ones are now too small. However, we failed in this mission. There were some party shoes I vetoed straight away due to their considerably-sized heels – call me prudish or a kill-joy but I really don’t think they are appropriate for a five-year-old, or safe, for that matter. The own-brand ones were too wide for her narrow feet, and the lovely Clarks ones seemed to have some kind of design fault because there was no give in the elastic strap, meaning even Little Miss E with her dainty feet couldn’t get them on, even with Jane’s help. We settled instead on a pair of multi-coloured Skittles’ espadrilles, which I hope will be perfect now the weather is getting warmer.

We were more successful with canvas pumps, with Little Miss E torn between a glittery silver pair and a spotted pair, both by Clarks. She went for the sparkly ones in the end – and I secretly wondered if they had them in a grown-up version, as they’re pretty funky. (Yes, I am the mum who now wears pumps, rather than heels, as regular readers will remember). 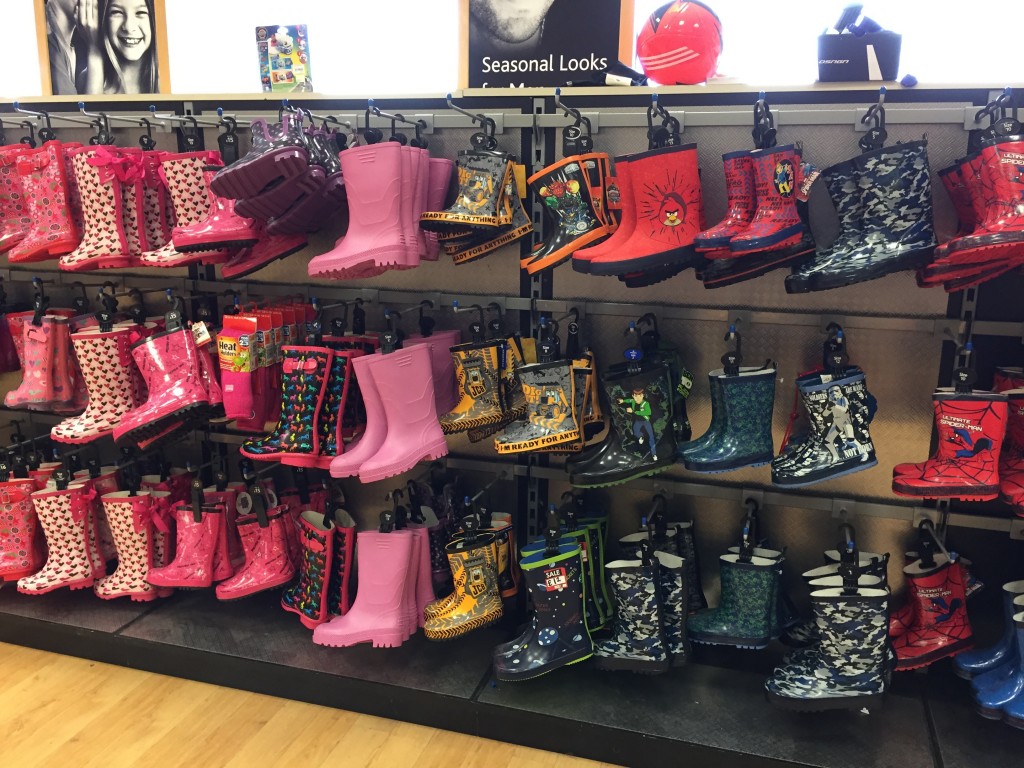 Our experience, although not perfect, has definitely made me consider Brantano Cardiff Bay for future shoe shopping excursions. Baby I will soon be needing his first pair of shoes, so I’m sure it won’t be long before we’re back again.

Where are your favourite places to get shoes for your children, in Cardiff or elsewhere? Come and let me know on the Cardiff Mummy Says Facebook page or by tweeting me on @cardiffmummy

Disclaimer: We were given three free pairs of children’s shoes in return for our honest opinions on the Brantano fitting service. We bought the fourth pair ourselves.

Homepage » Cardiff » Can we find new shoes for my children at Brantano Cardiff Bay?