When I wrote about people who misuse parent car-parking spaces, I hoped it would be popular among readers of my blog and my followers on Facebook and Twitter. I’ve had so many conversations with parent friends about their frustrations at never being able to find those extra wide spaces that enable them to get their children out of the car safely and without damaging the car next to them, so I hoped they would read it, nod in agreement and get on with their day.

I posted it on my Cardiff Mummy says Facebook page at 10.30pm on a Wednesday night. Within an hour, it’d had 500 views, about 15 people had commented on my Facebook page and several of my followers had shared it. When I checked my phone at 7am the following morning, it’d had about 1,000 more views. Brilliant, I thought, sympathising with all those parents who had been up in the middle of the night. 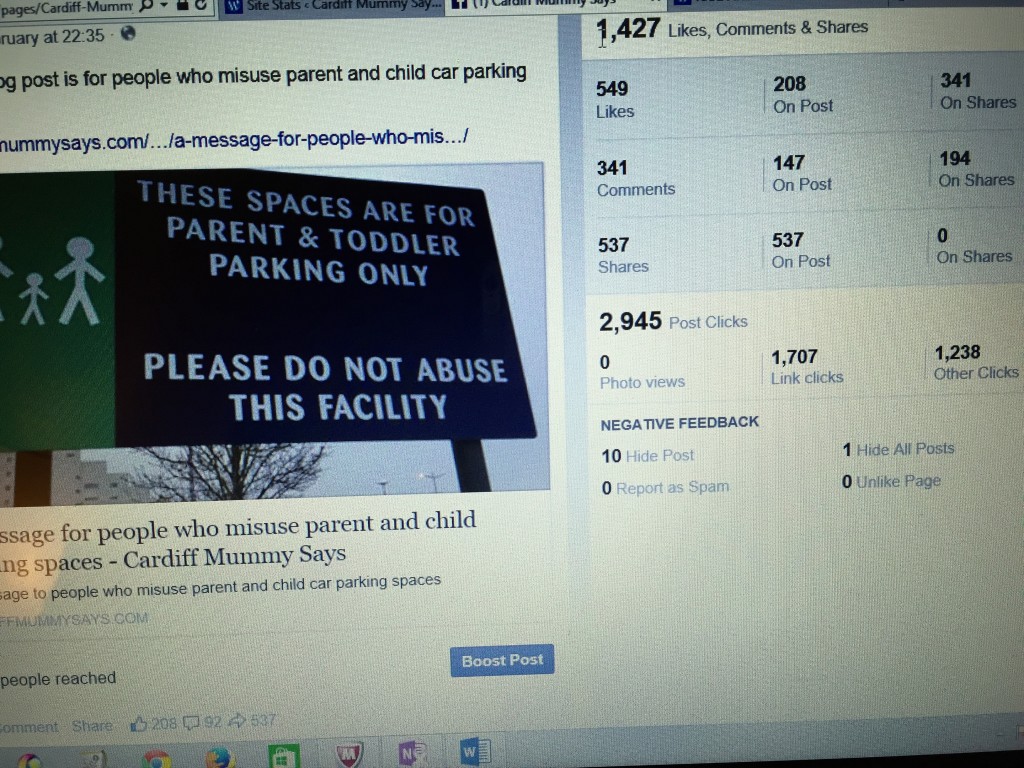 And then, my phone did not stop pinging for the next few hours, with comment after comment appearing on my Facebook page and my blog. The post was read over 7,000 times that day. In fact, each day that week, it was read by between 3,000 and 5,000 people. And every day for the following two weeks, too.

I usually get 15-20,000 views on my blog a month (edit July 2015: it’s about three times that now). People tell me that’s good going, especially as I’ve only been blogging for seven months, and especially because my blog is something I do in the evenings when my children are asleep, rather than a full-time job as it is for some bloggers. For the three weeks while my post was doing the rounds, I was getting around 18,000 to 20,000 views a week. Almost four weeks later, and it’s been read over 55,000 times in total and shared over 530 times on Facebook. It’s calmed down now, but I’m still getting 100 or so views a day on it. 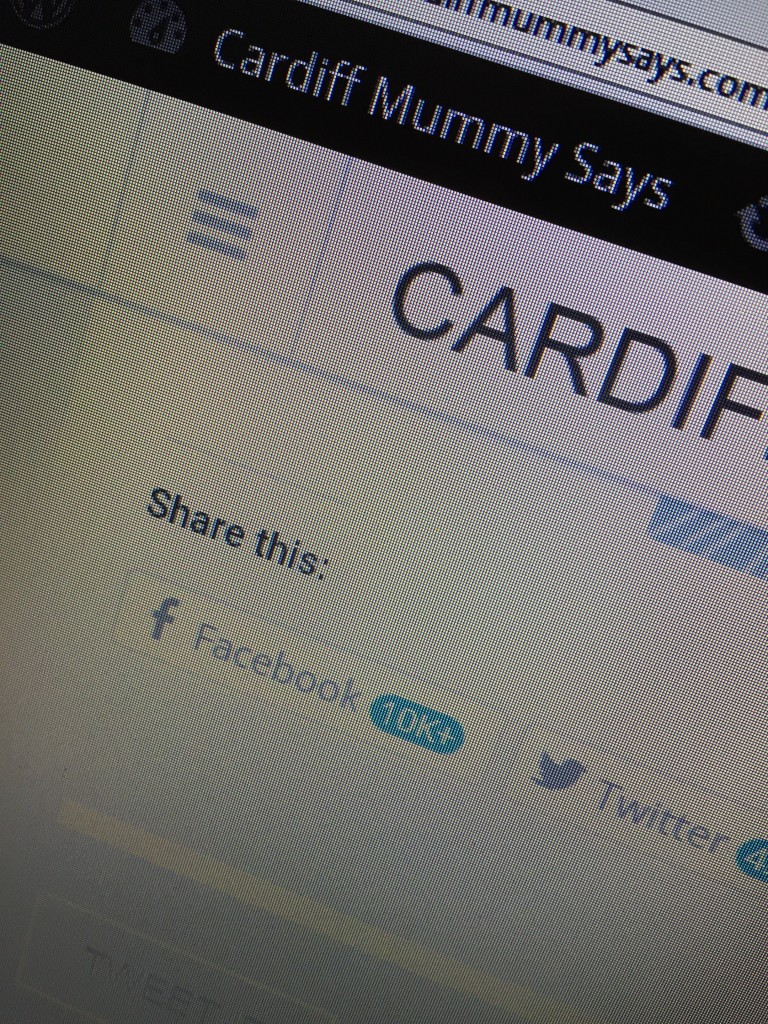 I won’t lie to you that I’m thrilled that so many people have read the article (especially as they are also clicking on other blog posts I’ve written too). So many bloggers say it’s not about viewing figures; it’s about writing because you love it. And yes, I love what I do, but as someone who has worked as a journalist for 15 years, of course I want people to read what I write. Otherwise I’d just keep a diary, or I would have carried on blogging in secret, like I did when I first started.

However, as the post got more widespread, some horrible things began to happen. I started getting nasty messages on my blog, on Facebook and on Twitter. I’m all for freedom of speech and I don’t have a problem when people don’t agree with me (in fact, one of my good friends and I have massively different opinions on everything, and I love that she isn’t afraid to challenge me). At first, most of those who had a problem with what I had written were polite about it, along the lines of “I get what you are saying, but…” However, some of the messages were so vile, I began to dread my phone pinging at me.

I haven’t deleted any of the unkind messages on Facebook or Twitter. In fact, I was humbled when my followers replied in my defence. It’s some of the ones posted on my blog, however, that I found most difficult to deal with. I have 10 nasty messages still sat in my “pending” file. All comments have to be approved by me before I publish them – and it’s my blog, so why would I want to approve such mean things?

I’ll give you a taster of some of the worst here.

“You made a conscious choice to have children, please deal with the consequences of this choice instead of expecting the world to bend around you. the fact that you have a child doesn’t mean the rest of the world should make allowances for your inability to perform basic tasks without a fanfare.”

“you, your child and either of your needs are of little or no consequence to me and i’ve had quite enough of having to fit my needs in around those of you and your child”

This is my personal favourite though: “Shut the fuck up you whiny twint. Im going to 0ark there all I want. Font bring your crying little twat of a chile to the grocery store in the first place. Fuck off”

I’ve cut and pasted these comments exactly as they are; spelling mistakes are certainly not mine!

I didn’t not publish them because they disagreed with me. In fact, there were a couple of posts in support of my arguments which also remain unpublished. One told me they had become so incensed by someone parking in a parent space that they took a key to the side of the car and left a scratch. I in no way condone this behaviour, so refuse to allow this on my blog.

The response to this blog post has reminded me more than ever that putting things on the internet means they are out of our control. You have no idea who is sharing or reading your post. You have no idea what their intentions are. I’ve had several posts go a bit viral since starting my blog, but nothing as controversial as this. The big difference with this post is that it quickly left the friendly bubble of parents who are my usual audience. It made me thankful I made the decision not to put photos of my children on my blog, or even to name them.

As a journalist, I’ve had unkind and personal comments aimed at me for things I have written. In fact, a lot of journalists don’t “go below the line”, as we in the industry say, because commentators on certain websites are notorious for their vindictive and spiteful opinions. However, when it’s your own blog, it becomes a lot more personal. There’s no editor to delete or moderate the worst comments before you’ve seen them, for starters.

Interestingly, all the nastiest comments came from people who did not use a real name. I might have strong opinions, but I always have the conviction to stand by them. I wonder if people would be so rude and intimidating if they had their full name and profile picture next to their comment. I guess I’ve got off lightly though as other journalists and public figures have received death and rape threats from online commentators.

As I said, I’ve not published these comments on my blog, and I’m not entering into any discussions with the people who left them. But I wanted to write about my experiences here as I think people who read my blog deserve to know what goes on behind the scenes.

What would you have done in this situation? I’d love to know what you think. Those of you who are bloggers, have you ever had any nasty comments like this on your blog? What did you do?