At the risk of sounding like some kind of pushy tiger mum, I’ve been keen to introduce classical music to my three children. I played the flute and piano as a teenager and have an A-level in music, and my career as a journalist and PR has seen me reviewing and working with orchestras, opera and ballet companies and the like. Music has given me so much, so it’s been natural for me to want to pass some of that passion down to my children.

We have a very out-of-tune second hand piano given us to by a friend which my children love plink-plonking about on, various drums and plastic percussion instruments they enjoy playing, some recorders they love screeching into, and a couple of classical music for children CDs in the car, which they’re happy to listen to.

And this weekend, Wales Millennium Centre invited my children to attend their first classical music orchestral concert – a double bill of Peter and the Wolf and The Nutcracker Suite, performed by the orchestra of the Mariinsky Theatre. The Russian company are one of the most famous in the world, dating back to 1783. Their ballet company and orchestra are currently in Cardiff performing Sacre by Stravinsky for the grown-ups – and so it was great to see the musicians putting on an additional show for children. 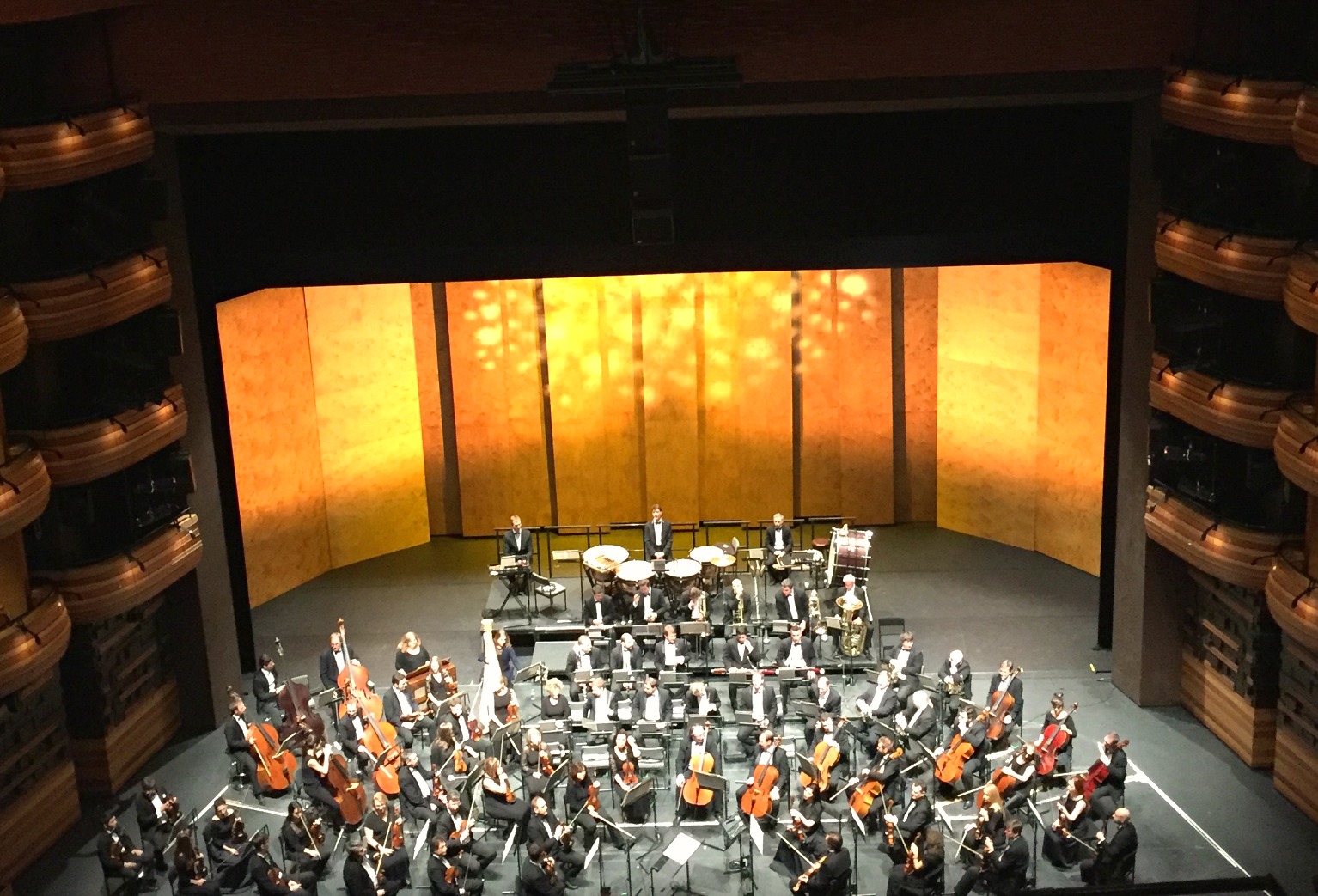 The performance opened (around 15 minutes late – possibly due to the number of people turning up last minute to collect their tickets from the box office) with The Nutcracker Suite, featuring the music from Tchaikovsky’s much-loved ballet.

My children are familiar with some of the music from the ballet, and we have a book of the story, but I wasn’t sure how they would respond to a purely instrumental performance. Little Miss E, my six-year-old daughter, and Little Man O, my 4.5-year-old son, were fascinated with the size of the orchestra – around 70 musicians, all in black evening dress, and on the main stage, rather than hidden away in the pit under the stage, as with some theatre shows they’ve seen.

Some of the instruments they were familiar with, but others were new. I also loved the look on their faces when they saw the size of the tuba and the double bass. Miss E loved to see the harp (played by Sofia Kiprskaya) taking the lead at various points, while Little Man thought the huge drums and percussion instruments were brilliant.

It was also interesting for them to see the different ways some of the instruments could be played – the strings section, for example, being plucked, rather than bowed. I wasn’t sure Toddler Boy I, my two-year-old youngest child, would cope with such a performance as he’s at that won’t-sit-still stage, but he had great fun up on his feet in front of his seat, swaying away to the music.

Prokoviev’s Peter and the Wolf, composed in 1936, is one of the most famous musical works introducing children to the orchestra.

Each character is played by a different instrument – Peter by the string section, his grandfather by the bassoon, a bird, cat and duck by the flute, clarinet and oboe respectively. Peter is playing in the meadow, despite his grandfather telling him he shouldn’t, watching the animals. But soon a wolf (played by three French horns) appears, closely followed by the hunters (the drums). Despite the wolf swallowing the duck in one gulp, Peter manages to save the wolf from being shot and leads a victory parade as the animal is taken to the zoo. Much has been written about the USSR political allegories in the story – but my children enjoyed it for the simple story it is.

We’ve been listening to the CD in the car, so my eldest two knew the plot, the idea of each instrument representing a character and the different musical motifs. It was lovely to see that recognition on their faces when the familiar melodies began to play and they hummed along.

The two musical sections worked well together and with the performance around an hour long, it was the perfect length for young children (the show was targeted at those age 5 and above). However, I felt the two pieces should have been performed the other way around. Peter and the Wolf traditionally involves the conductor introducing the different instruments of the orchestra to the audience and narrating the story. It makes it really accessible for children and gets them involved them from the start. The Nutcracker Suite is incredibly beautiful, but it would have benefitted from an introduction or some kind of interaction with the young members of the audience before it started.

It also would have prevented the confusion when The Nutcracker Suite finished. A number of the musicians were not needed for the second half of the performance and when they started vacating the stage, people presumed it was the interval and so started to get out of their seats too. Not all of them arrived back in time for the start of Peter and the Wolf, which was a real shame for them and disruptive for those around them.

Minor gripes aside though, this was a wonderful first introduction for children to classical music, allowing them to experience a full orchestra in a child-friendly atmosphere, not to mention the stunning surroundings of Wales Millennium Centre’s Donald Gordon Theatre.

Did you see Peter and the Wolf at Wales Millennium Centre or have you taken your children to any classical music performances? Do let me know in the comments section below, by tweeting me on @cardiffmummy or join in the discussion on the Cardiff Mummy Says Facebook page.

If you want to introduce your children to classical music, Wales Millennium Centre often hosts free family-friendly performances in the foyer area, as well as music sessions at their monthly toddler days.

Elsewhere in Cardiff, The Royal Welsh College of Music and Drama has some free classical music events throughout the year, the Welsh Proms at St David’s Hall in Cardiff every July feature a family prom and a Tiddly Prom for pre-schoolers (plus a festive Tiddly Prom in December), Welsh National Opera run occasional family-friendly orchestral events, while Little Notes runs regular weekly classes with classical instruments.