Thanks to Wales Millennium Centre for inviting us to review Slava’s Snowshow.

“This is bonkers,” Little Miss E whispered to me midway through Slava’s Snowshow at Wales Millennium Centre last night. And indeed, it was bonkers. Not to mention surreal, a little bit eerie, very beautiful, and quite unlike any other theatrical experience we’ve had before.

At that point we were covered with a giant cobweb – and I mean seriously giant. Starting on the stage, it grew and grew until it covered the whole of the audience seated in the stalls and needed all of us with our arms in the air plus a bunch of clowns to keep it moving overhead. 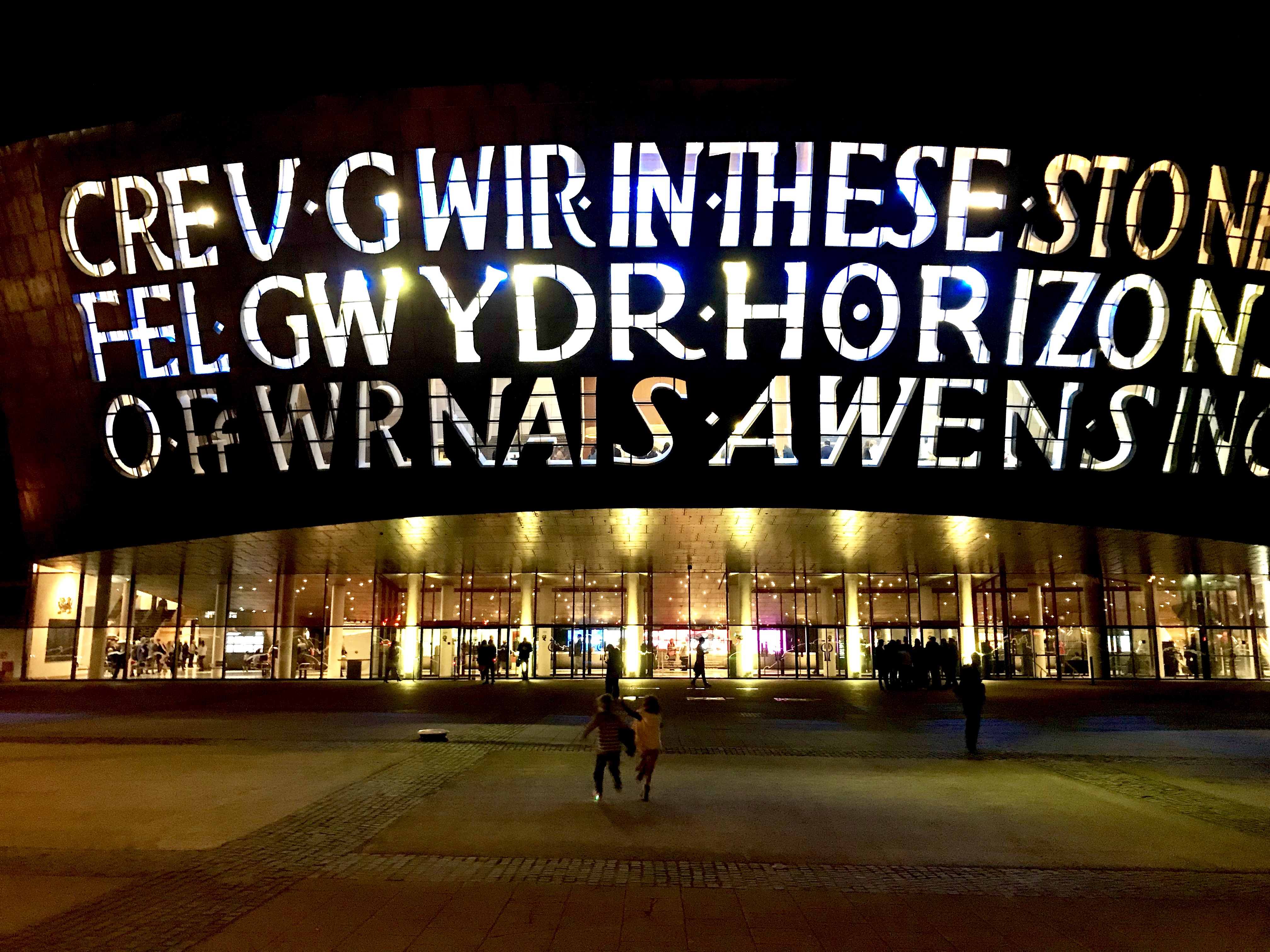 Later in the evening we found ourselves bouncing a dozen or so large brightly coloured inflatable balls around the theatre like a bizarre game of theatre volleyball; not to mention being covered in ‘snow’ in the form of thousands of pieces of paper.

These were definitely three of the highlights for my children: Little Miss E, 7¾, and Little Man O, who recently turned 6. They’d wanted to see Slava’s Snowshow ever since they first saw the posters at Wales Millennium Centre a few months ago. They’ve watched a few YouTube videos of the show so knew roughly what to expect. And the show did not disappoint.

Created by Slava Polunin, artistic director of the St Petersburg Circus, the multi-award-winning show is now in its 25th year and has toured 80 countries worldwide to much acclaim. It’s in Cardiff until Saturday as part of its current UK tour, which will see it visiting theatres in Salford, Edinburgh, Glasgow, Norwich, Bristol and Southampton, finishing at to London’s Southbank Centre in December for its fifth festive season.

In between the aforementioned moments of audience participation, which had us all laughing, we were entertained by a group of 10 clowns – the lead clown dressed in a baggy orange all-in-one and the rest clad in green with brown headwear, reminiscent of floppy beagle ears. There isn’t much of a storyline as such; more a series of sketches using mime, slapstick and great comic timing. 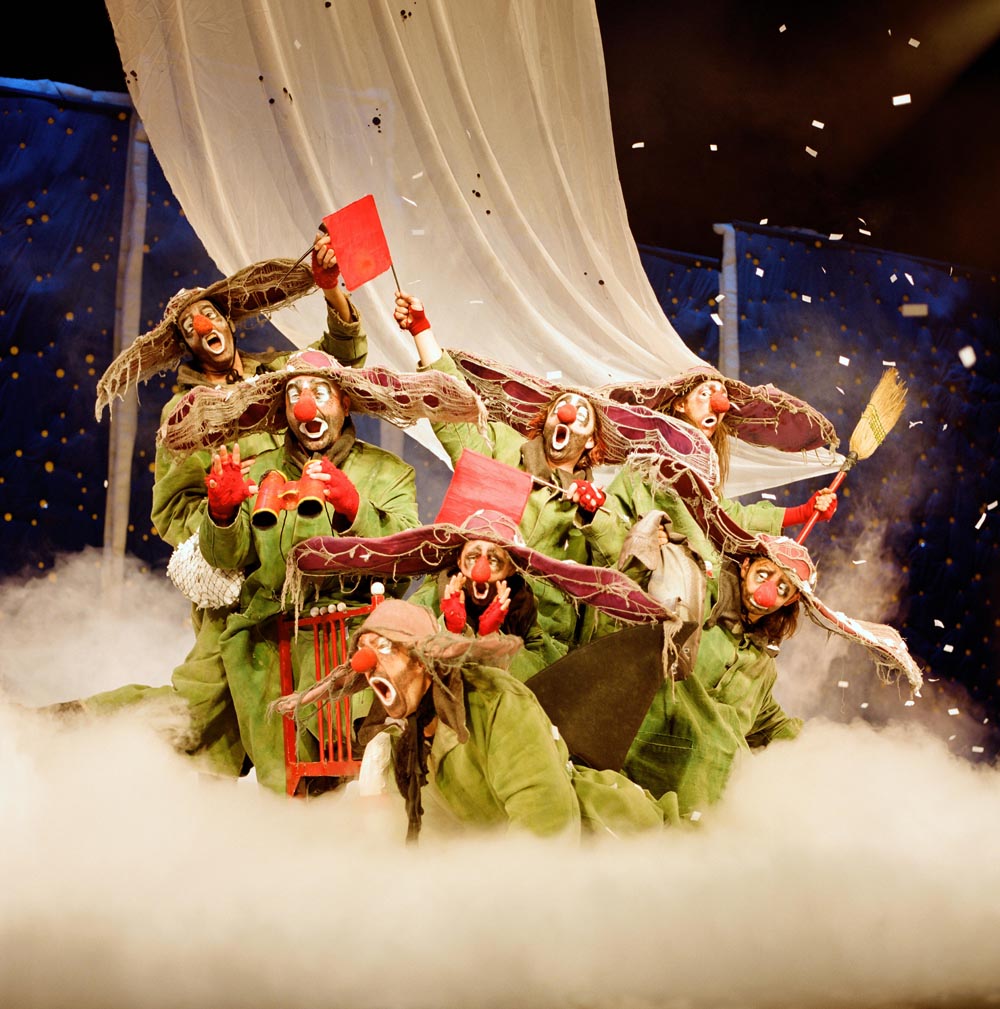 In one scene, the orange clown sails in a makeshift boat while a clown with a shark fin on his back circles him, writhing around the stage on his belly… before getting up and taking a bow. In another, the orange clown takes to the stage with two large telephones and pretends to be both halves of a conversation. Even though he doesn’t speak in any recognisable language, it’s clear from his mannerisms, actions and tone of voice exactly what is going on. We thought it was hilarious.

It’s one of the few moments where any kind of dialogue is used. The rest of the show relies on movement, music and lighting to convey its messages. 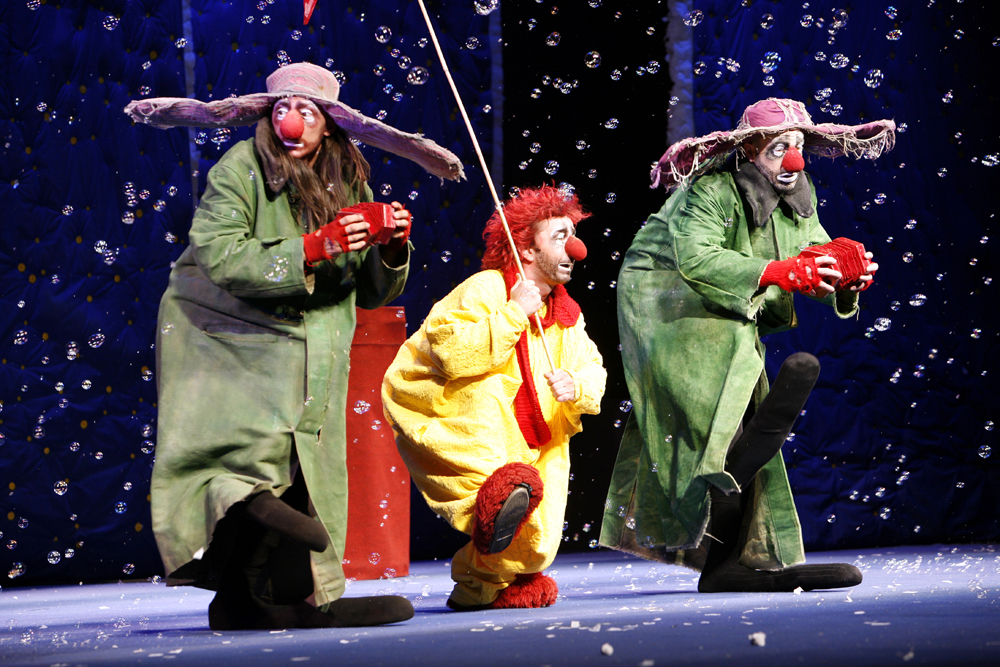 There are a few moments which make the show not suitable for younger children. At one point, our lead clown appears on stage with several arrows through his chest and pretends to die. Another clown enters with a bow and arrow in his hand, taking credit for his actions. I was worried this would scare my children – not only are they both sensitive souls but they are younger than the recommended age guidance of 8, after all. However, the scene was played with plenty of humour and smiles, meaning it left them laughing rather than cowering in fear.

The little skits in between the main scenes are eerie at times with creepy music and dark shadows creating a tense atmosphere. However these moments are short and soon progress into something funnier so thankfully it wasn’t enough to worry my children. 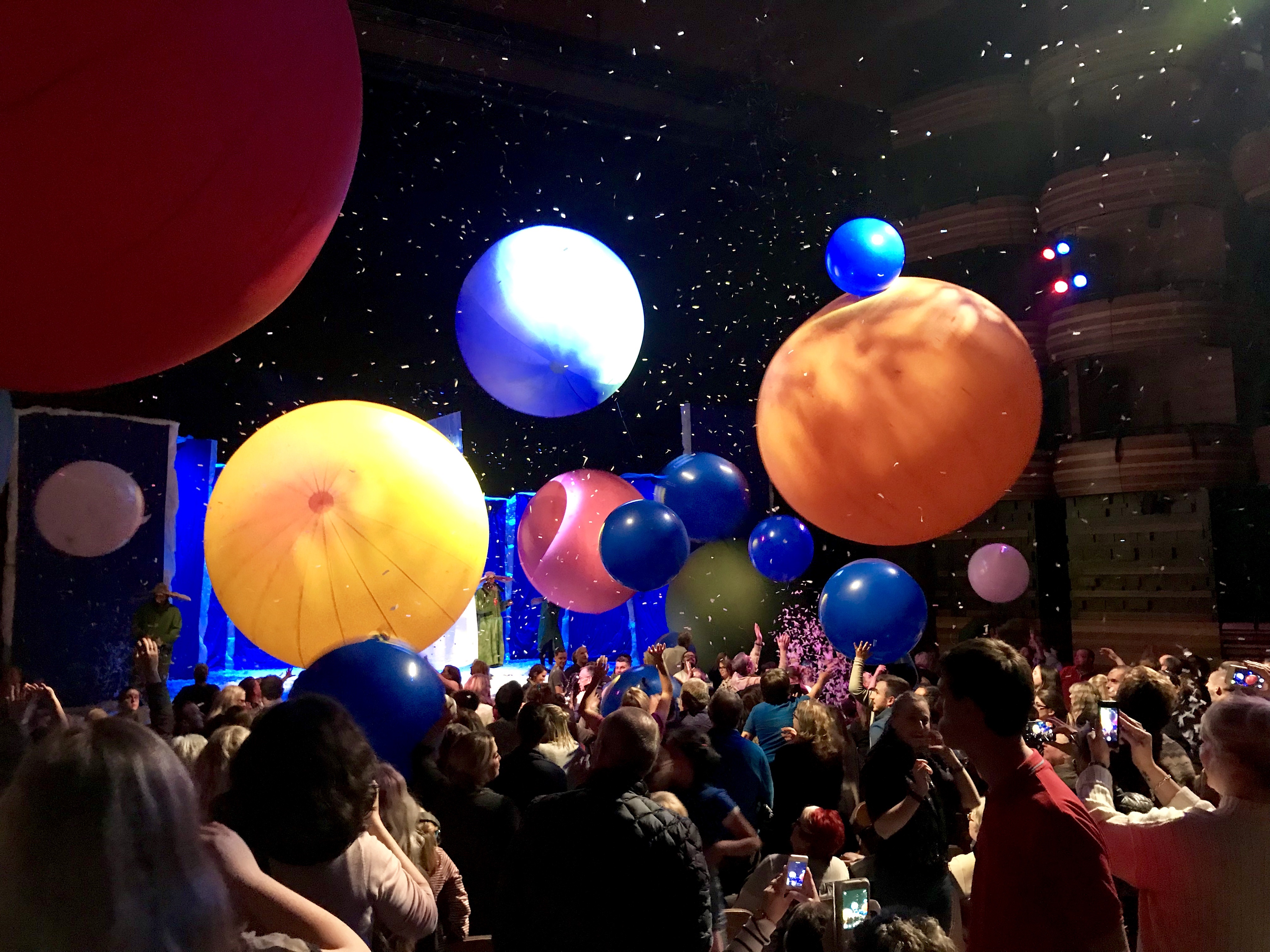 The pace was a little slower in parts than I had expected but there was so much to look at on the stage that it captured my children’s full attention throughout.

As the auditorium cleared at the end of the show, the two of them had great fun picking up piles of ‘snow’ and throwing it over themselves. 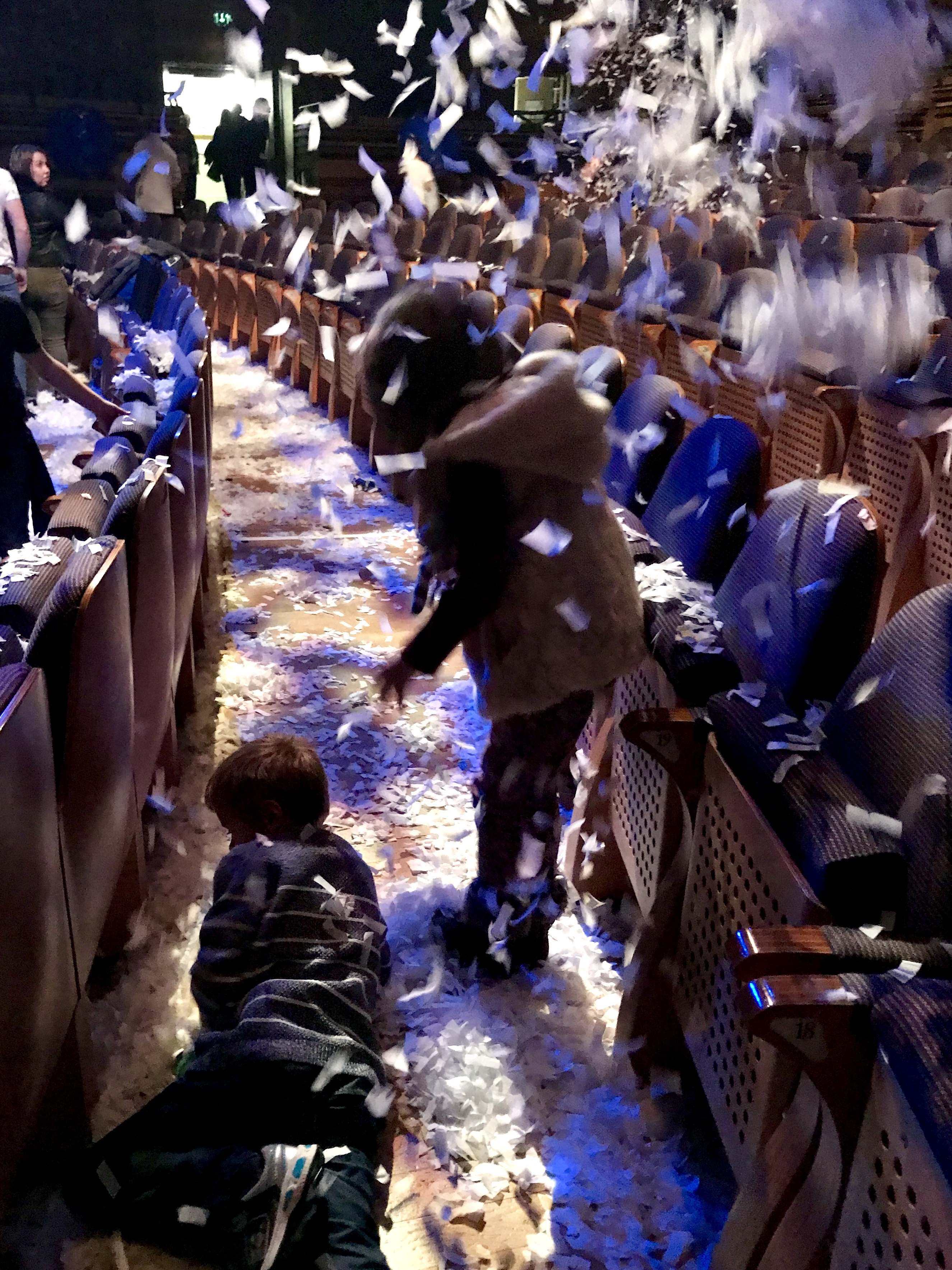 I don’t envy whoever has the joy of performing that task all week!

If my children had had their way, they would have taken arms-full of the stuff home; a lovely reminder of a fantastic night of entertainment.

Slava’s Snowshow is at Wales Millennium Centre until Saturday 21st November. Tickets cost from £14-£36. Age guidance 8+. No entry to under 2s. See the website for details.

Have you seen Slava’s Snowshow? Let me know what you thought in the comments below, on the Cardiff Mummy Says Facebook page or you can tweet me on @cardiffmummy