*Thanks to Wales Millennium Centre for inviting us

As fans of the picture book, Littlest and I were super excited to be invited to see the stage adaption of The Bear at Wales Millennium Centre yesterday afternoon.

It’s playing in the smaller Weston Studio theatre over the festive season and is every bit as enchanting and beautiful as you would imagine a Raymond Briggs theatre show to be.

Bristol-based Pins and Needles have succeeded in creating an hour-long delight that had my three year old completely mesmerised. (Not to mention me!) 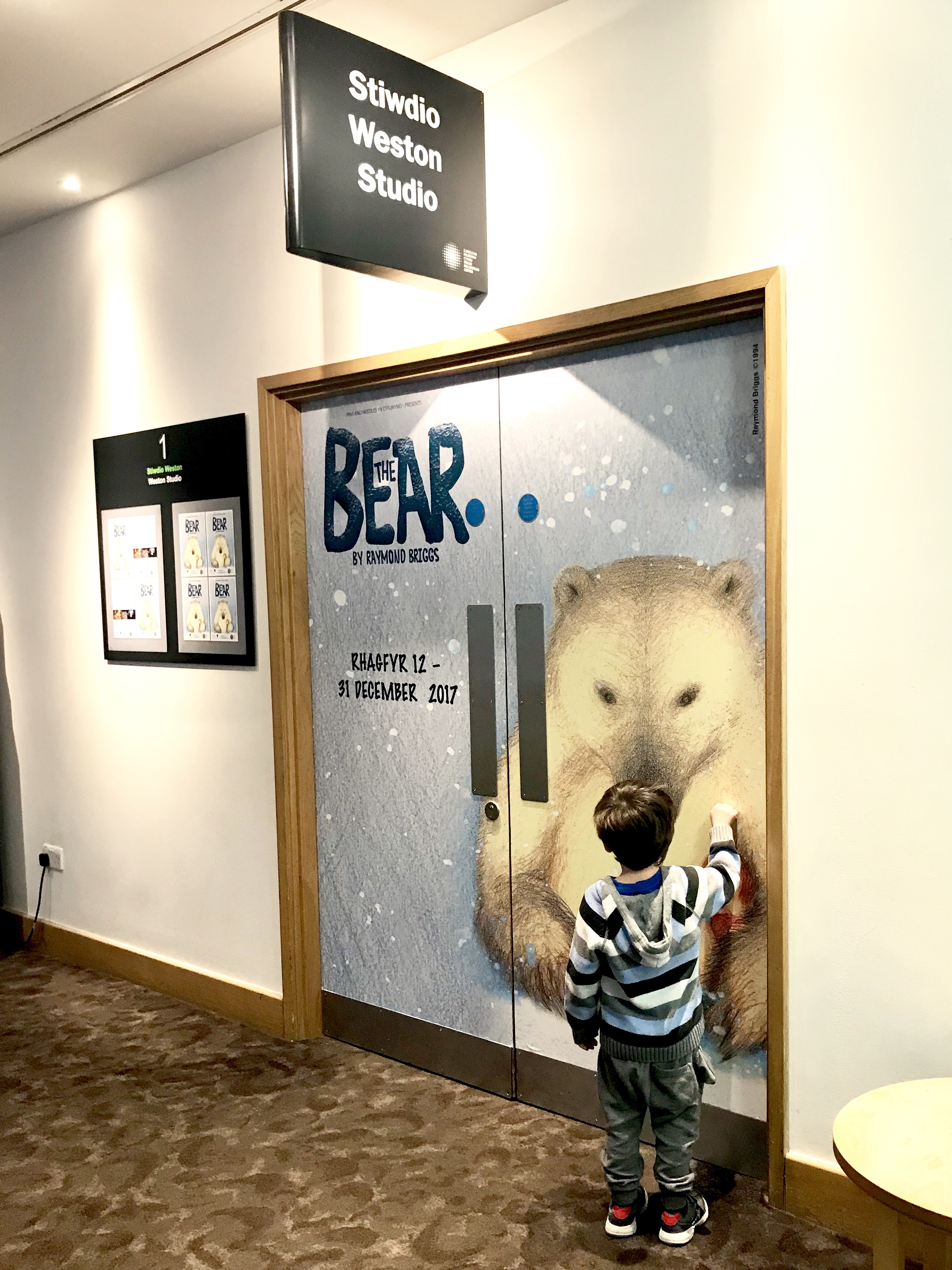 Just minutes before the show he’d been crazily running around Wales Millennium Centre’s Ffresh restaurant, where we attended a special press lunch to celebrate the show’s arrival in Cardiff. But as soon as we took to our seats he sat on my lap and barely moved; he was utterly entranced by the story unfolding before him. 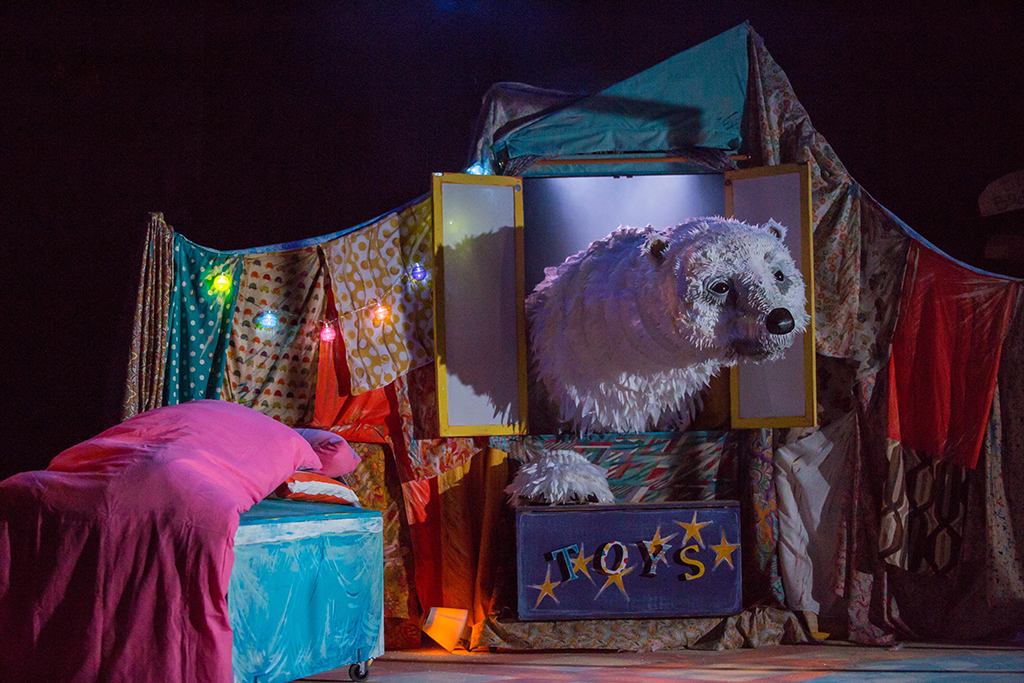 Created by the author of The Snowman, The Bear is about a little girl called Tilly. One night a big white polar bear climbs in through her window and thus begins a beautiful friendship as the two learn more about each other’s ways. The bear causes havoc wherever he goes. He breaks things and wees and poos on the carpet. He drinks from the toilet bowl and drenches Tilly when he has a bath. But he is warm and cuddly and Tilly loves him with all her heart. Tilly’s mother and father humour her when she talks about the bear… but the show is so tender and well-executed that it’s never quite clear what is real and what is not.

Susanna Jennings plays Tilly. We first meet her dressed in a red onesie and procrastinating about going to bed in a way that I’m sure most parents will relate to. Susanna gets the childlike qualities, expressions and mannerisms spot on and is a delight to watch. 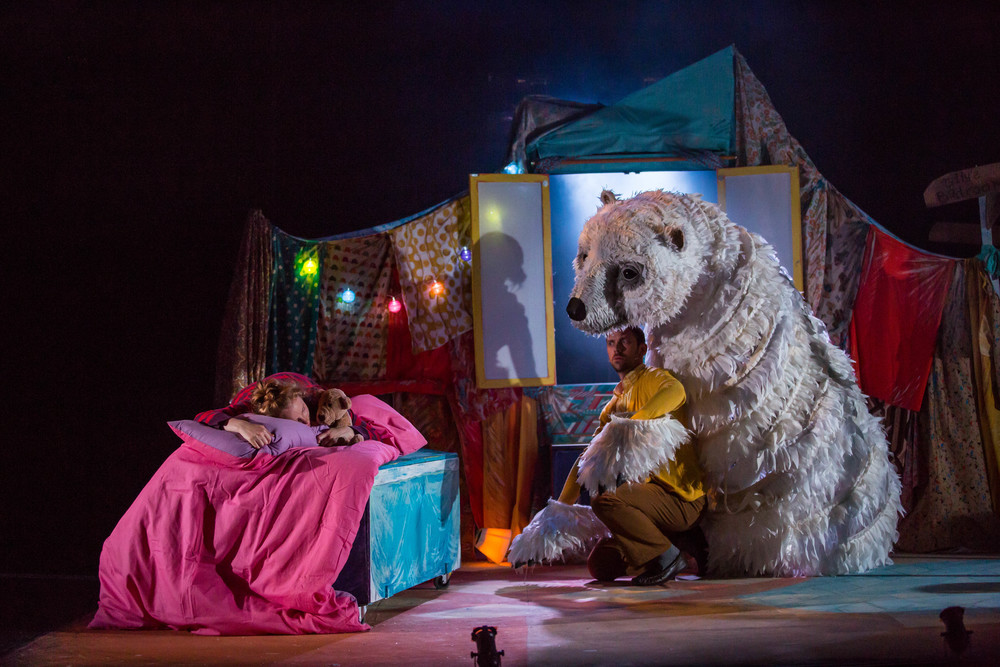 Lucy Grattan and Benedict Chambers play her mum and dad as well as puppeteering the real star of the show – The Bear. They move the giant creature around so gracefully and smoothly that you almost forget they are there.

(Please note these press photos relate to a previous staging of The Bear and feature a different cast.)

One or two children in the audience did get frightened by the bear. But the majority were fine.

The set is so simple but incredibly versatile as the actors move props around and transform them into other things before our eyes. The stage backdrop is dark and the lighting subtle. It’s not quite a recreation of Briggs’s book but evokes the same warm and tender atmosphere his works such are known for. 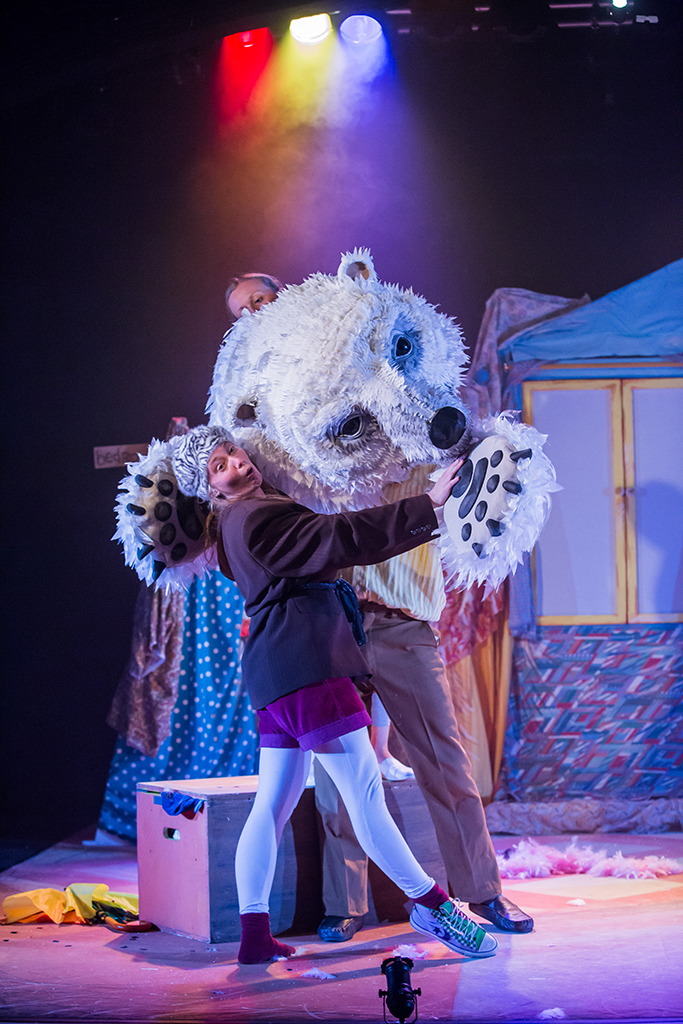 The final scene is really emotional. I don’t want to spoil it but it is a beautiful and tender sequence with a few surprises. I know I wasn’t the only one with tears in their eyes by the end of this heart-warming show that really brings to life the wonders of childhood. And with tickets at just £10 it’s an affordable festive family treat.

The Bear is at the Weston Studio at Wales Millennium Centre from Tuesday 12th-Sunday 31st December 2017. It is also running simultaneously at Waterside in Sale, Greater Manchester. Tickets are £10 per person.

Before or after the show you can also explore the Arctic themed displays in the Centre’s foyer. There’s an alpine village made from cardboard boxes plus a trail of different arctic animals to find. The polar bear in particular is incredible standing on a glacier made from empty water bottles. Read our review to see more.

Wales Millennium Centre are kindly offering one family the chance to see The Bear on Thursday 21st December at 10.30am.

For a chance to win leave your answer to the following question on The Bear post on the Cardiff Mummy Says Facebook page. Be quick though! Closing date for entries is 11.59pm on Sunday 17th December.

Q. What is the name of the little girl in The Bear?