I’m so excited to be invited to CBeebies Live next week. Oops, I mean my children are so excited. Yes, that’s who’s excited. Not me. Nope. I’m only going to watch Justin & Friends: Mr Tumble’s Circus for their sake….

Ah, who am I kidding?! Of course I’m flipping excited. Long gone are the days when I used to watch bands in the Motorpoint Arena (or Cardiff International Arena as it used to be known when I actually had a social life of my own). I’ve seen everyone from Kylie to Oasis in that place. But, as happens to the best of us, grown up nights are few and far between these days – so how can you not be excited about taking your precious children to a show that you know will have them jumping around in their seats with sheer delight because people they know from the telly are right there in front of their eyes, getting them to sing and dance and play games? 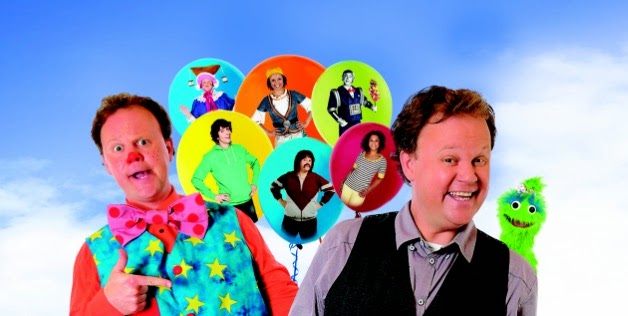 We don’t watch that much TV, but Something Special, starring Mr Tumble, is one show my children love. For those not familiar, Mr Tumble introduces children to Makaton sign language in a fun, lively and colourful way. I’ve taken all three of my little ones to baby signing classes. My main reason for this was so that they could communicate with the adults in their lives before they could speak – but I also liked the idea of being able to learn enough signs so that I could communicate with people who use sign language too. With my eldest two, it was amazing to see them telling me what they wanted or what they could see. Now, they are enjoying teaching their baby brother signs too and he ius just starting to sign, so they love this show and are constantly showing me new signs they have seen (who says TV can’t be educational?!). I also love how inclusive the show is, featuring children with learning disabilities without being patronising. Justin is also the man behind other CBeebies favourites, including Gigglebiz, a fast-paced sketch show, and Justin’s House, home to an array of quirky characters, both of which my children really enjoy. This man certainly deserves the MBE he received in 2008 for services to children’s broadcasting and the voluntary sector.

But anyway, back to Justin & Friends: Mr Tumble’s Circus. It’s going to be bright and bold and full of songs, games and circus acts. It will see Justin joined on stage by familiar characters from Justin’s House, Gigglebiz, Swashbuckle, and other CBeebies favourites as they try to overcome a range of obstacles to ensure Mr Tumble’s Circus can get to town on time.

Here’s what the man himself has to say about the show in this interview that the people behind the show have kindly let me publish on Cardiff Mummy Says.

Justin & Friends: Mr Tumble’s Circus – that sounds like fun! What inspired you to give this tour a circus theme?
Well, the first Justin & Friends show (in 2013) we themed the show around Justin’s House and this time around we wanted Mr Tumble to play a bigger part. So we thought that given that Mr Tumble is a clown, we’d give the new production a circus theme. The circus theme is also the perfect environment for the arenas that we visit – big imagery, lots of colours and lots of larger than life performances from the cast and a host of guests as well.

Did you go to the circus as a child? What was your favourite part of the show?
Yes, I went to the circus many times as a child and obviously I loved the clowns. What I vividly remember is the clown car, that’s why I’m now a big collector of weird and wonderful vehicles! I remember the car coming into the middle of the ring and then half of the car collapsing, then the bonnet came up and a big water cannon sprayed the audience! There were bubbles everywhere and I remember thinking “Wow!”. I now have my own version of a clown car that we’re actually going to use in the new Justin & Friends show.

Will we be seeing any special circus acts in Mr Tumble’s Circus?

Yes, we’re certainly going to have some speciality acts – lots of juggling and balancing as well as a few surprises… And of course there’ll be clowning! It wouldn’t be a circus if it wasn’t for the clowns.

If you decided to run away with the circus, what act would you do?
I think I’d have to be a clown, Mr Tumble would fit in perfectly.

Which of your CBeebies friends will we be meeting on this tour?
We’ve got lots of great people joining the tour this year. We’ve got Andy Day, who I’ve known for a very long time. Our lovely CBeebies presenter Cat Sandion and Gem from Swashbuckle are going to be joining us for the first time, which will be great. We’ve got lots of characters from my other shows as well: Robert the Robot will no doubt be following me around trying to tidy up after me; Little Monster will be causing mayhem and mischief; from Gigglebiz we’ll have Arthur Sleep and Keith Fitt amongst others. And let’s not forget the Tumble family! I believe Aunt Polly will also be making an appearance. All in all, a huge array of CBeebies favourites.

Are you going to CBeebies live? Do let me know on the Cardiff Mummy Says Facebook page or by tweeting me on @cardiffmummy

4 Comments to CBeebies Live in Cardiff – An interview with Justin Fletcher, AKA Mr Tumble