This time last week I thought I’d be starting this week writing about the holiday house we’d booked to stay in with Cardiff Daddy’s family over the weekend. It was his 40th birthday and his dad turned 70 in January so we’d planned to go away for the weekend to celebrate – eight adults, six children ages 3-8, and one newborn baby. Let’s wait until March, we’d said. It’ll be warmer then, we said.

Ha! Little did we know the Beast from the East and Storm Emma had other ideas as the two collided and plunged the country into a snow storm of epic proportions and came to a standstill.

It was our first snow in Cardiff for five years. Last time it snowed Miss E was three and Little Man was 16 months. They barely remember it. Littlest wasn’t even born. 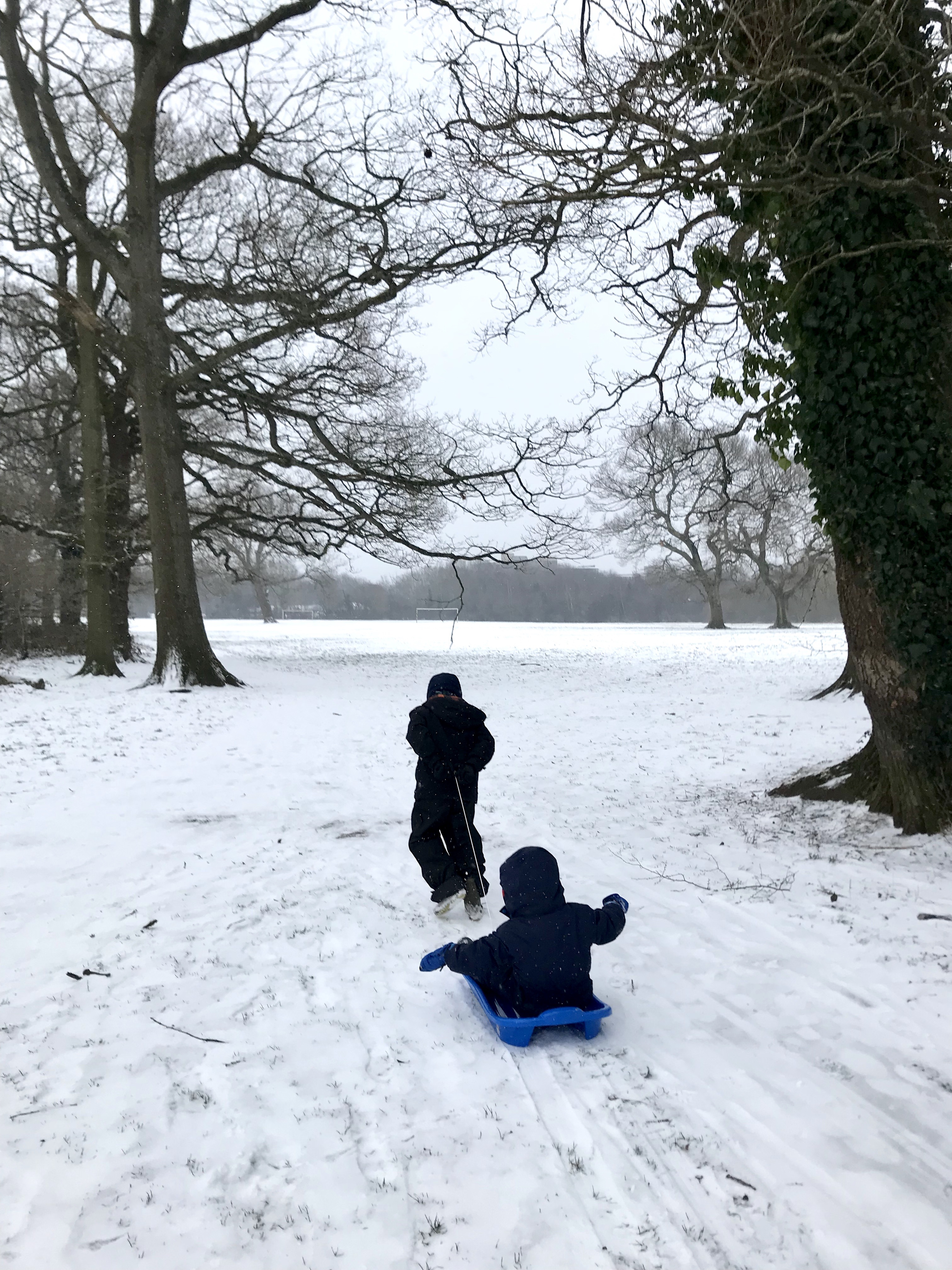 For all their disappointment over not going away, they were super excited about the snow.

As soon as we knew it was definitely coming I headed to Mountain Warehouse in Llanishen to invest in a snow suit for my youngest and waterproof trousers for the others. As I told Cardiff Daddy: “First snow in five years! There’s no way I am having them coming in after five minutes complaining they are too cold. We are making the most of this.” Forget panic buying bread and milk – on Wednesday morning straight after school drop off, Mountain Warehouse was full of mums panic buying warm clothes.

I even got myself a pair of snow boots in the sale. I’ve never understood why wellie companies don’t make them warmer inside; the snow boots are amazing! 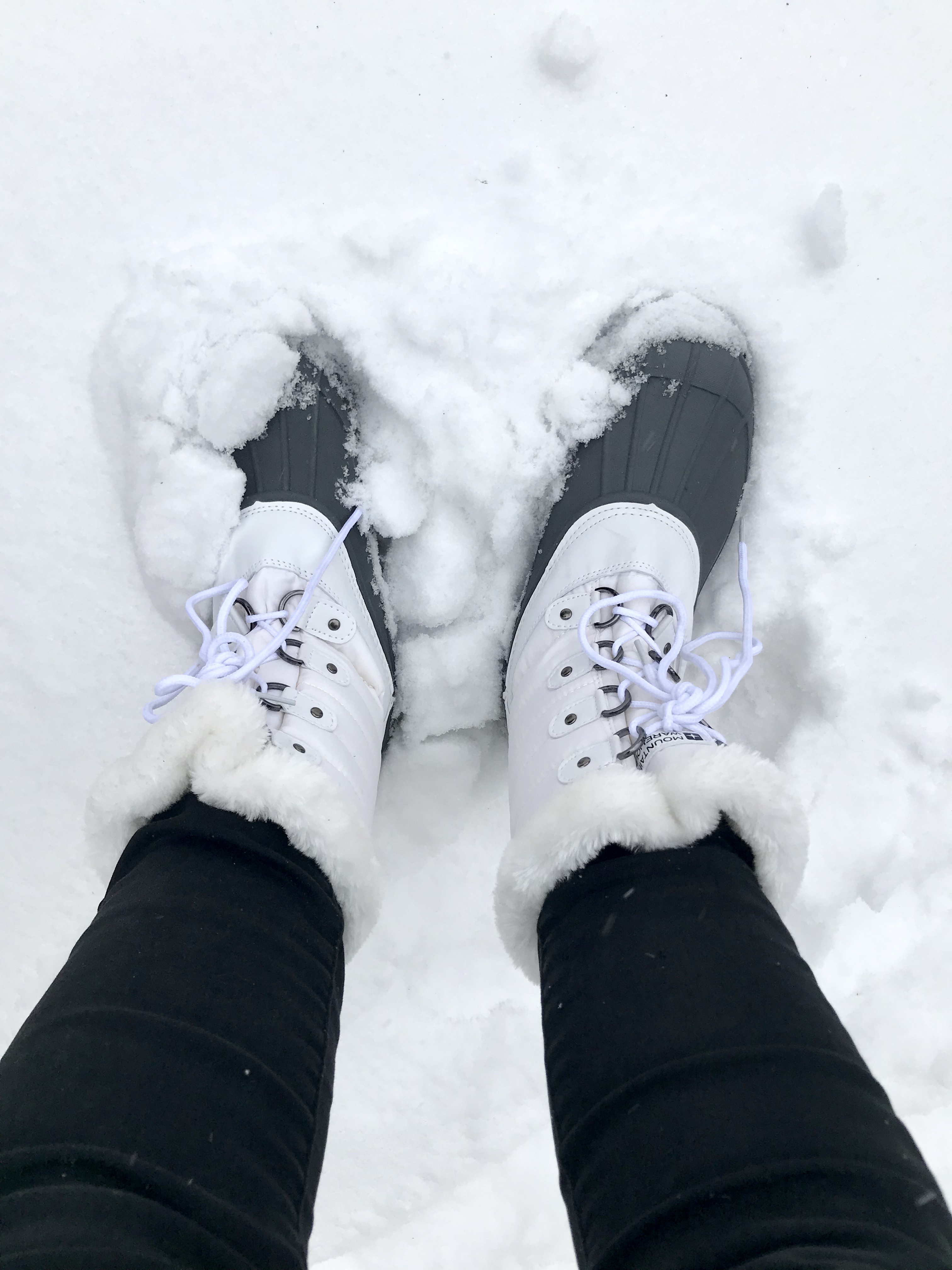 We knew at pick up on Wednesday that school had been cancelled on Thursday. The snow we woke up to made us wonder if we’d all got a bit excited about nothing. But then… it really truly snowed and kept on snowing, giving us lots of wondrous sledging and snowballs and snow angels. (While in between Cardiff Daddy and I stressed about getting all our work done.) 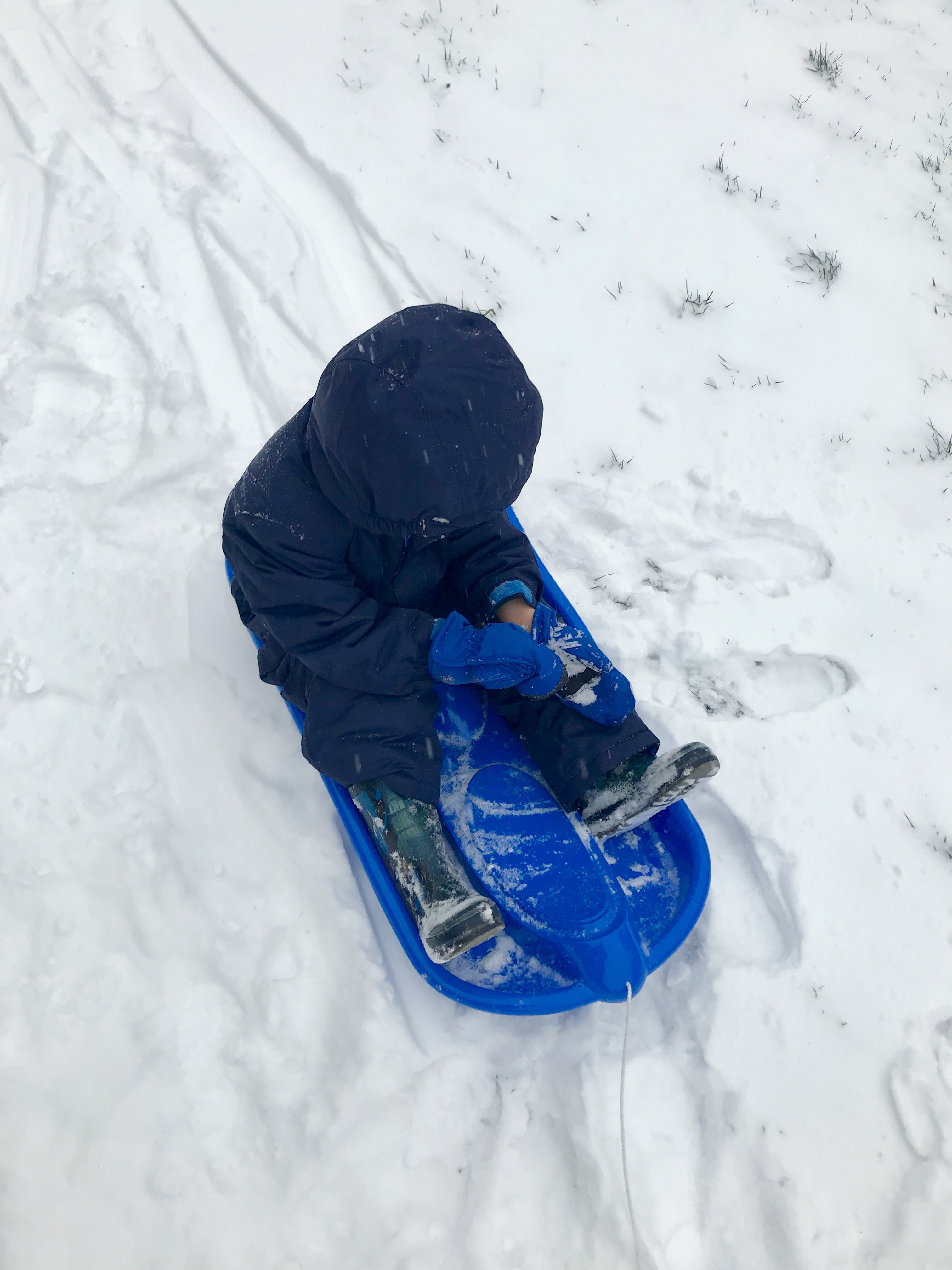 Our family WhatsApp group went into overdrive about the weekend. We had around a foot and a half of snow. There was no way it would have been possible to get our car out of the drive and onto the road. Or safe. And even if we could the road out of Cardiff was closed. We had a red weather warning for the best part of three days. Nope. We wouldn’t be going anywhere. Neither would his family over the bridge. His brother had to abandon his car because he couldn’t get it up the hill. It took two days before he was able to dig it out. 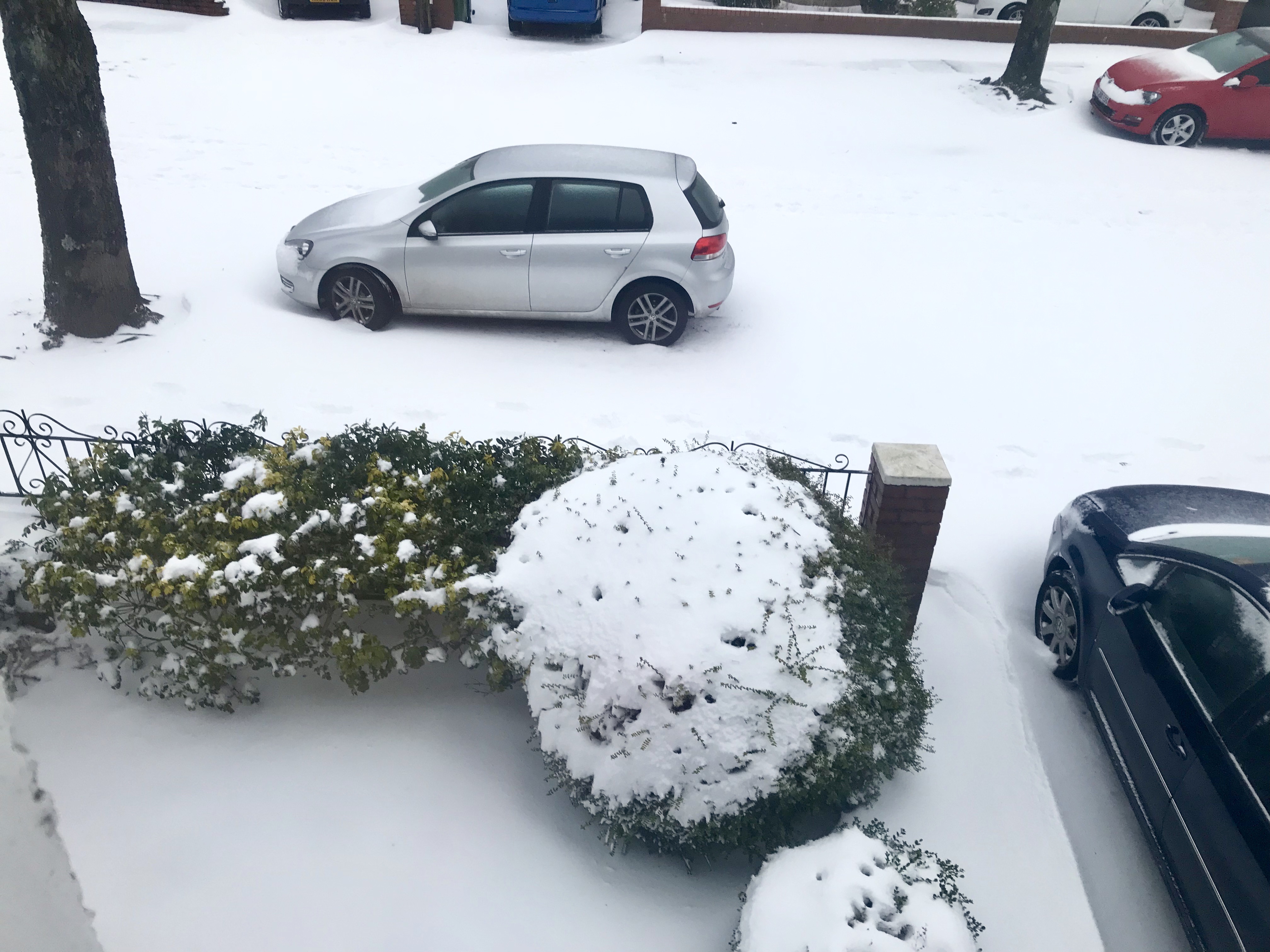 At the time of writing this we still don’t know whether the owner will let us reschedule the weekend or whether it’s covered by travel insurance. Possibly we’ve lost all our money.

In the grand scheme of things – when an army of volunteer 4×4 drivers were transporting hospital workers and patients around; when brave souls were operating snow ploughs on the motorway in treacherous blizzards; when people’s lives depended on the selflessness and bravery of others – it doesn’t seem important.

But still it’s frustrating. Cardiff Daddy never makes a big deal of his birthday but I could tell he was disappointed. 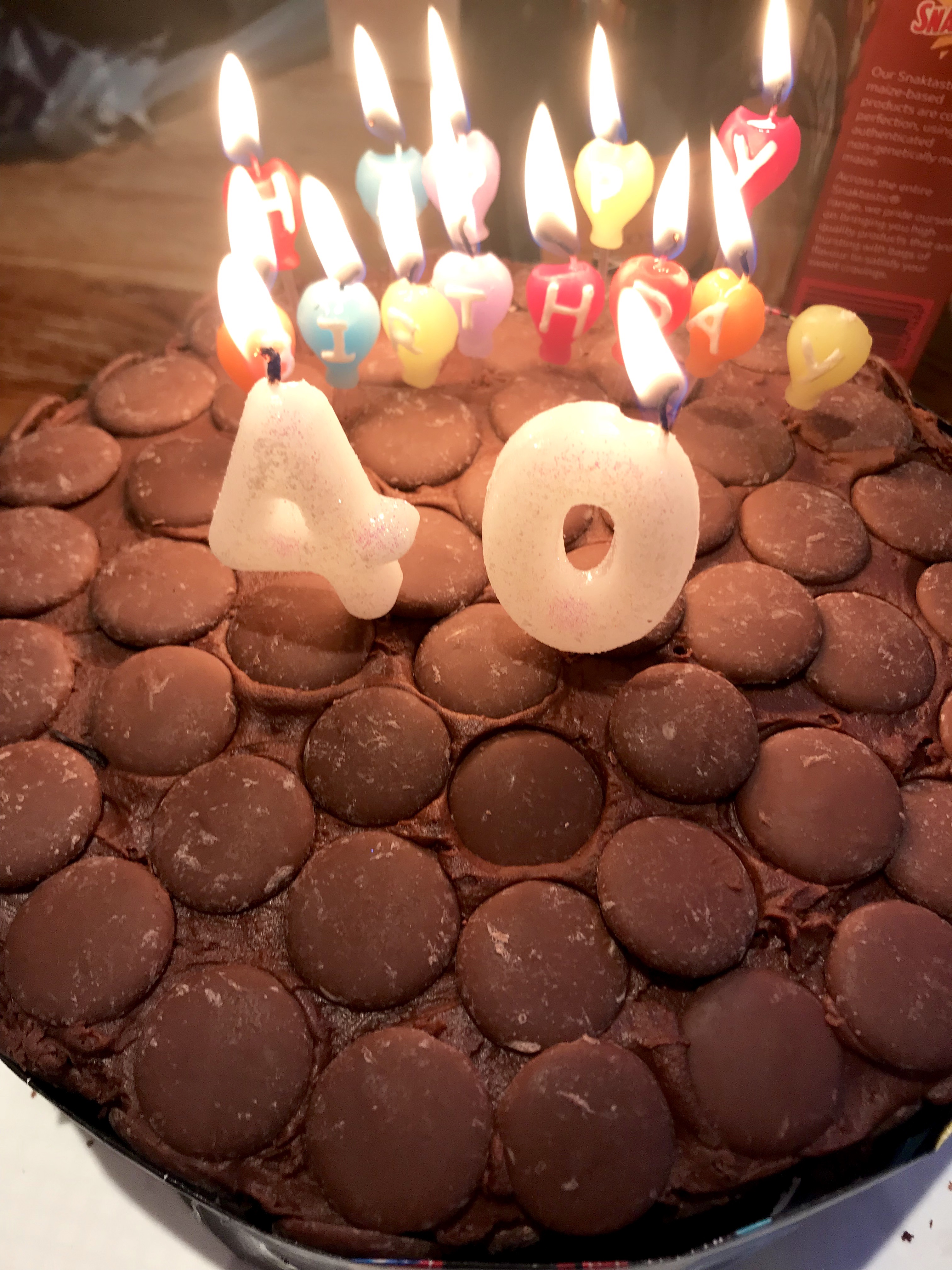 We had divided up all the food for the weekend and luckily I had been in charge of making a cake so at least we had that… along with enough homemade soup to feed a small army.

But as lovely as the snow was, I really didn’t want his 40th to get forgotten.

And so I came up with a plan. On the Friday night I concocted a plan with Cardiff Daddy’s friends to surprise him with a trip to the pub. They had to trudge through the snow and called at three different pubs before they could find one that was open – and even then that one called last orders at 9pm. But at least he’d been out and had a birthday beer. 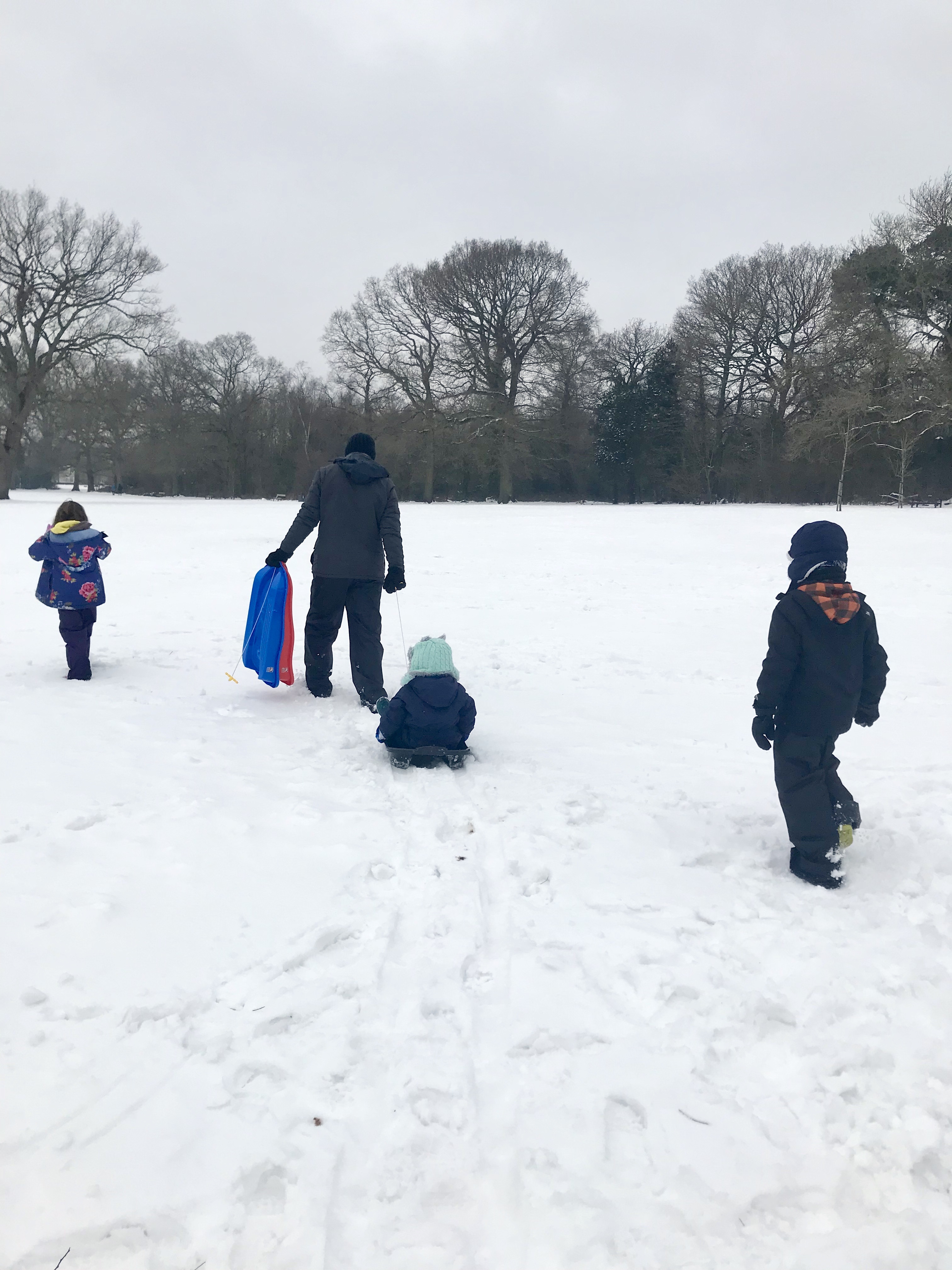 On Saturday afternoon I invited a few friends who live within walking distance around for an impromptu party. Funnily enough the snow meant everyone else’s plans got cancelled too. Cardiff Daddy had no idea until five minutes before when I raided the cupboards for whatever we had in the way of party food – a multi bag of Jaffa cakes and a squashed bag of salt and vinegar crisps.

As the kids got all the dressing up clothes out and prepared a show, the dads cracked open some beers and we mums nattered over Prosecco. (Disclaimer – responsible drinking only… we know we were in charge of kids.)

It was wonderful and once all the snow play was out of the way definitely the best way to get through being snowed in. I think everyone was happy to have a change of scenery.

The dads took Cardiff Daddy to the pub again and he came home a few hours later rather merry and takeaway in hand. 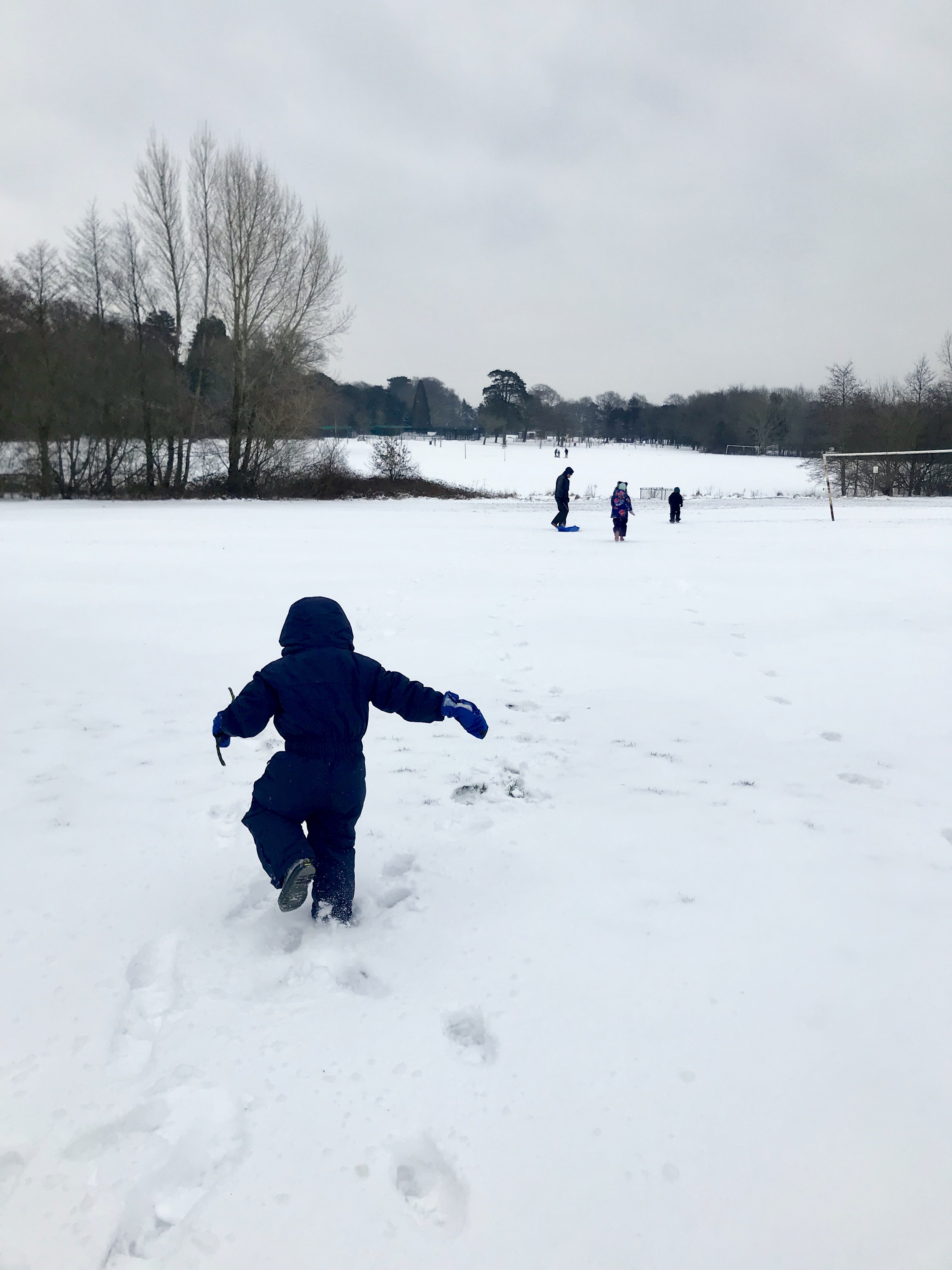 Despite the frustrations of missing out on our weekend away Cardiff Daddy and I both said we loved the slower place of life the snowstorm caused. There was none of the usual weekend rushing around; the kids in the neighbourhood could run around our street having snowball fights – ordinarily it’s too busy with traffic for them to play outside; neighbours knocked on each other’s doors to see if they needed anything; everyone seemed somehow friendlier

It felt like a timely reminder of the important things in life.

No, it wasn’t the 40th weekend we had in mind but it was lovely in its own way and it’s certainly not one he’ll forget about any time soon. 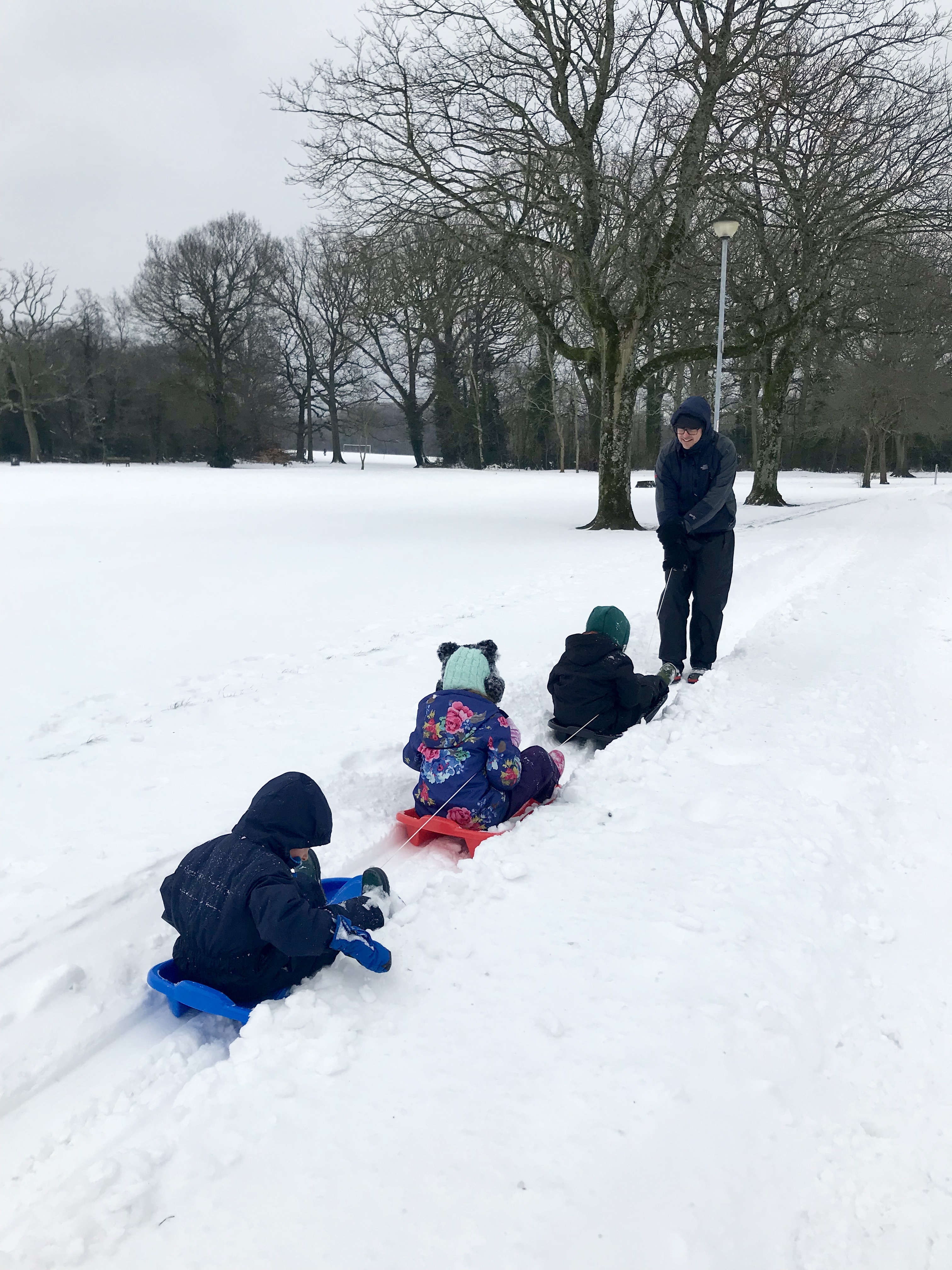