Sometimes it feels that whatever you do as a mother is wrong.

Breastfeed because it’s so good for your baby. But don’t ever talk about it because that means you’re part of the breastfeeding mafia, shaming mums who don’t breastfeed. Definitely don’t ever breastfeed in public though, eewww, no, that is disgusting. And certainly don’t breastfeed your child for “too long”. But don’t get a bottle out in public, either, because, you know, formula is bad.

Be a working mum to show your children strong female role models. But then why did you have children if you’re only going to palm them off on other people instead of watching them grow up? You don’t want to become a stay-at-home mum though, because we all know they’re lazy scroungers, right?

Wear a face-full of make-up and smart clothes on the school run and be accused of being a yummy mummy putting her appearance before her kids. Wear saggy leggings and hair slapped back in a ponytail and you’re a disgrace to womankind who needs to stop this slovenly behaviour at once.

Write about the fun aspects of being a mum on your mummy blog and you’re living through rose-tinted glasses. Talk about the hard bits of parenting and you’re doom mongering and making it a badge of honour to have a messy house and unkempt kids.

Have one child and you’re selfish for only having one. Have two and continually get asked whether you’re going to have any more. Especially if you dare to have two of the same gender, because obviously you can’t be satisfied until you have both pink and blue now, can you? Have three or more and get called crazy or selfish for single-handedly overpopulating the world.

In fact, have children at all and you’re smug and rubbing it in the face of those who don’t have children. Choose not to have children and you’re a bitter, selfish old spinster who thinks only of yourself and not the greater good of society’s future survival.

Like I say, when it comes to motherhood, whatever you do is WRONG.

And so I come to The Motherhood Challenge, which you surely can’t have failed to notice has been dividing a nation this week.

I have no idea where it originated, but I first started seeing it a week or so ago when mum friends began to post a selection of photos that made them proud to be a mum, and tagging other friends who are good mums to do the same.

I’ve been nominated but I’ve not yet taken part.

This is partly because, as with every Facebook challenge of this nature, as soon as it goes viral, you’ll find every national newspaper in the country and beyond condemning you for doing so. Just like the ice bucket challenge and the no make-up selfie challenge before it, the national media are obsessed with creating a divide over The Motherhood Challenge and vilifying those who take part. It makes me feel a bit, well, bullied as to what I can and can’t publish on my own little space of the Internet.

I’m not saying that some of these criticisms aren’t without merit – but rather than intelligent and balanced think pieces, what we get are harshly worded opinion pieces designed to rile people and create a divide.

The main criticisms of The Motherhood Challenge are firstly that people who are struggling to conceive and cannot have children find the sudden deluge of kid photos upsetting; secondly that people without children find it boring and smug; and thirdly that it paints a one-sided view of motherhood being all laughing babies and smiling cute kids, putting pressure on mums who are experiencing post-natal depression or finding it tough.

On the first of these points. I’ve been the lady who had a devastating miscarriage and had to see birth announcements and baby photos all over Facebook and in the real world. It’s incredibly painful. I remember crying my eyes out when it seemed like the whole world was pregnant and I wasn’t. It still hurts when I think about it, and I can’t imagine how difficult it would be if I’d not been blessed with my children.

It took me a long time to realise that the chances were a good proportion of those mums posting baby photos probably had a miscarriage or fertility treatment or difficulty conceiving. Not all of them want to talk about it in public. I have parent friends who post about their kids on Facebook, but not everyone knows their babies were conceived by IVF or were adopted due to years of difficulty conceiving. Yes, constant baby photos can hurt, but we shouldn’t always presume that a baby photo means people have had it easy. And sometimes when you’ve waited a really long time for something, you do want to celebrate it.

We all have our own interests…

So (some) people without children don’t like it when their parent friends post pictures of their children. That’s fine. They’re entitled to their opinions. I can imagine if you’re not a kid person, kid photos are really boring. (Incidentally, I thought some of the parody postings of the Non-Motherhood Challenge, which showed non-parents getting drunk and lounging around in bed, sleeping until noon, were hilarious.)

But that’s the thing with Facebook, not everyone has the same interests. If you don’t like something, just scroll on by. I don’t especially like it when people check in every time they go to the gym; or when a map and a time appears every time someone goes for a run. But other people who are interested in it will comment. Because it’s relevant to them.

I get bored when people who follow football teams I have absolutely no interest in post their own analysis of every single match and share every single news story about the team. But I can see from the comments and banter that other people like it.

I’m a vegetarian. Seeing photos of someone’s steak isn’t my favourite thing; but others will comment on how good it looks. As with all of the above I just scroll on past it and take no notice.

I posted a highly contentious human rights story on my personal Facebook page this week. Two people liked it, and one person shared it. That’s three interactions from more than 750 friends about a massive news story. However, whenever I post a cute picture of one or all of my children on my personal Facebook page, it’ll get 80, 90 even 100 likes and dozens of comments.

Yes, that means a good proportion of my Facebook friends are ignoring it, and that’s fine. But a fair few of my friends are interested, some who have children, some who don’t. I try not to overshare. But in my experience, some people are oversharers by nature, some people aren’t, whether that’s kids, dogs, their careers, health problems, whatever. I’ve ‘hidden’ some of these people so they no longer show up in my news feed.

The real challenge of motherhood….

As for the final criticism, that The Motherhood Challenge paints a one-sided view of motherhood. Now, I’m not saying there’s anything wrong per se with posting cute pics of your kids. I do it myself. But parenting can be hard and we shouldn’t be afraid to talk about that.

In all the media hype over the “smug mums” taking part in this challenge, the challenging elements of motherhood seems to have been forgotten about.

The media doesn’t help, by continually pitting mums against mums. Some of the harshest opinion pieces on The Motherhood Challenge have shocked me by being from other mums, who surely must have experienced the continual judging of motherhood for themselves. As a journalist myself, I know that editors demand strong opinions. I know many journalists who make a very good living by hamming up their opinions and thinking the ridiculous because they know it will provoke a response in readers. And editors and advertisers are happy when lots of people read their publication.

Motherhood – parenthood – IS hard. I’ve written about it before on Cardiff Mummy Says, as well as the “mummy guilt” that constantly plagues so many of us. In both instances, I was overwhelmed by how many parents reading my blog could relate. This week, my middle child has been poorly, with a fever and a really high temperature. I’ve felt guilty about dragging him out of the house, in his pyjamas, to take my eldest child to school and pick her up. My energetic toddler has been climbing the walls due to three days of quarantine. And then yesterday I came down with it too and had to look after three children when really I should have been tucked up in bed. The house is a mess because cuddling my poorly child has taken priority over housework. I’ve been trying to juggle work. I’m getting cabin fever from barely leaving the house and I am so desperate for adult conversation I probably scared off the postman by answering the door so enthusiastically this morning. I’m tired because my poorly child has been waking up at night wanting his mummy and daddy. I shouted at my daughter when I probably should have taken a deep breath and bit my tongue. I apologised straight away but felt bad all day.

No, it’s not life or death stuff, but it is challenging. 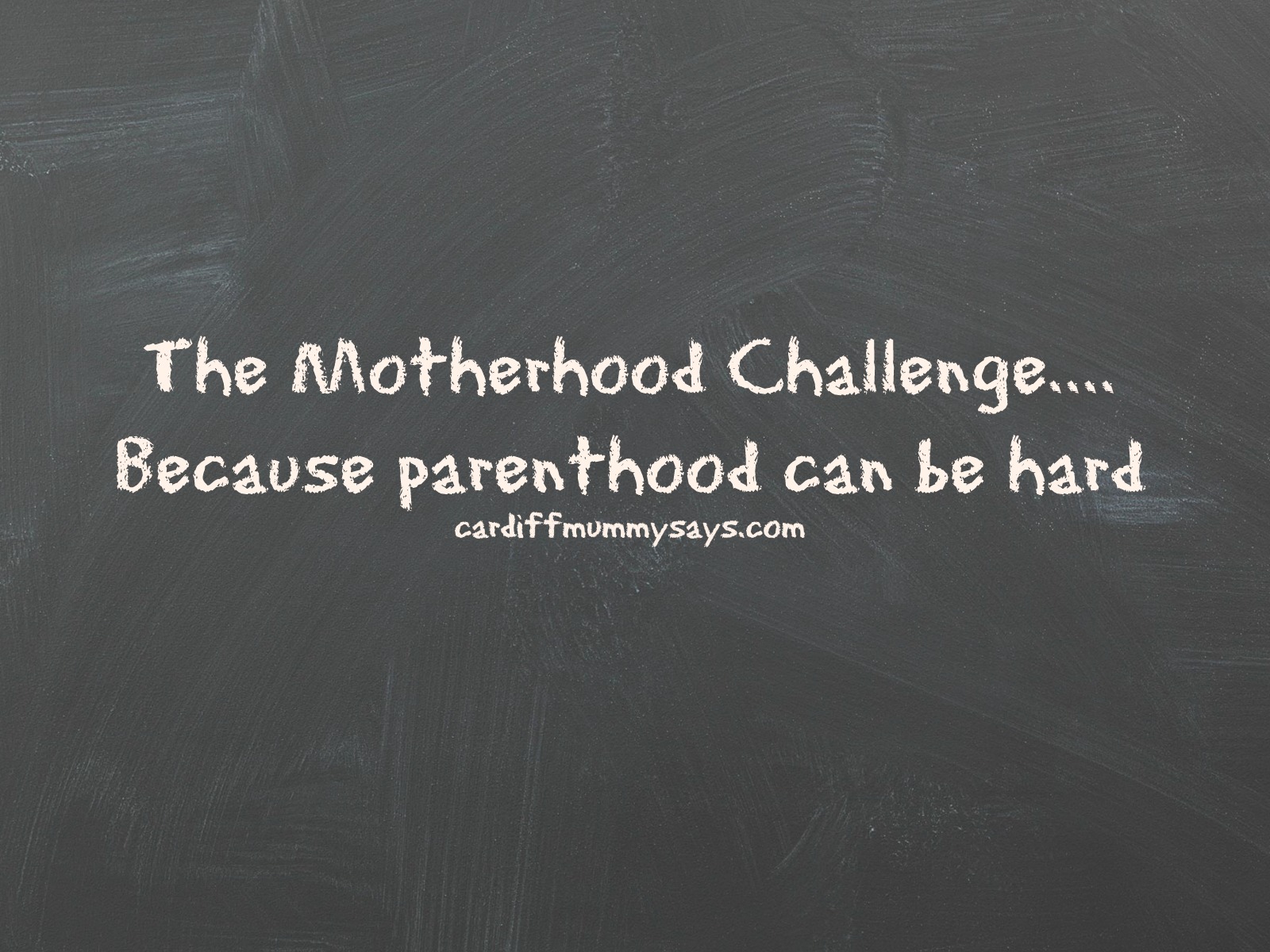 Homepage » Family life » The Motherhood Challenge – because parenting can be hard

10 Comments to The Motherhood Challenge – because parenting can be hard