Quick link: You can sponsor us here.

What a year it has been! I never thought the run-up to my first marathon would be full of so many twists and turns.

When I got the email confirmation last August from Tommy’s to say I’d been given a place on their team for the April 2020 event, I cried. I wasn’t sure if I could do it. I’d applied for a place, but they’re so hard to get, I didn’t really think I’d get one. Should I tell them I’d changed my mind? Made a mistake?

But then a couple of days later a friend’s baby was born prematurely and sadly died shortly after birth. Another friend experienced her third miscarriage. And it confirmed to me that of course I could do this. In honour of my friends and their angel babies, my own angel baby from my very first pregnancy which ended in miscarriage, and all the friends whose grief I’d shared over the years, of course I would do this. It was a stark reminder that no amount of physical pain caused by running 26.2 miles could ever come close to the emotional and mental pain of losing a baby (I’ve written about the pain of miscarriage a lot on my blog).

Tommy’s provides support to so many women and their partners who have experienced miscarriage, still birth and prematurity, and funds ground-breaking research to help save little lives. I reminded myself that I was doing this for people like my friends, for people like me. Baby loss shouldn’t happen as often as it does. And when it does happen, it shouldn’t be shrouded in shame and stigma, or the lonely grief people feel due to an expectation that you shouldn’t talk about it.

Fast forward a few weeks and having run Cardiff Half Marathon in October 2019 in a time I was really happy with, I was feeling in a really good place. I had six months to double my distance. But then a few weeks later, at Cardiff Tough Runner trail half marathon, my knee went suddenly around three-quarters of the way through and I had to limp my way to the end (you can read more about that event here). 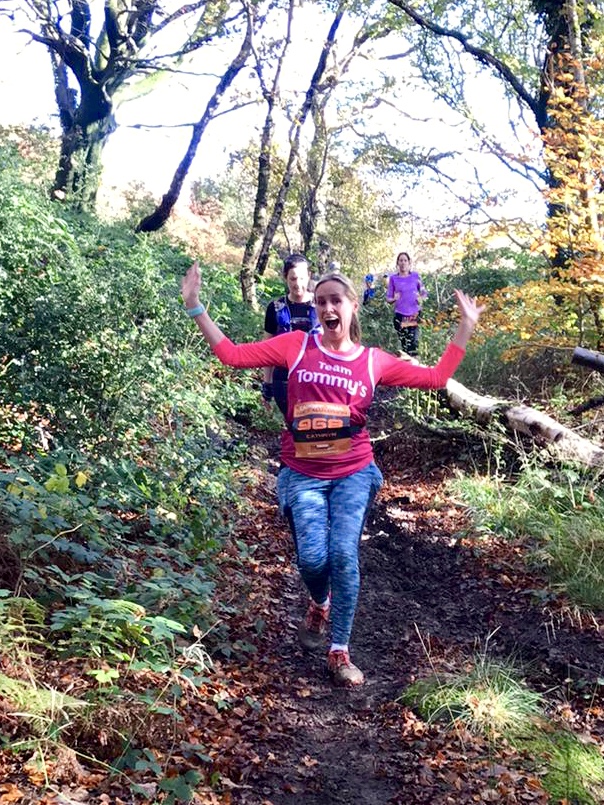 I rested for a week or so. It seemed fine. It was fine for my first few runs. But then slowly, the pain kept coming back and it was getting worse. I saw a physio, I saw a sports massage therapist. I saw a doctor. I had an X-ray. I did all the strengthening exercises prescribed by the experts for what was diagnosed as an ITB issue. I cut back my distance and speed. In mid-January, with things not improving, I made the decision to stop running entirely until I was properly healed.

And then, as we all know, Covid took a hold of our country and lockdown happened.

After weeks of uncertainty Virgin London Marathon 2020, that would have taken place in Sunday 26 April, was cancelled due to Covid and postponed until 4 October. Even if it hadn’t been cancelled, I would have had to pull out due to injury. In a way, I was relieved the decision had been made for me. On what would have been the day of the London Marathon 2020, my family and I walked 26.2 miles between us to mark the occasion. I wore my Tommy’s vest with pride. 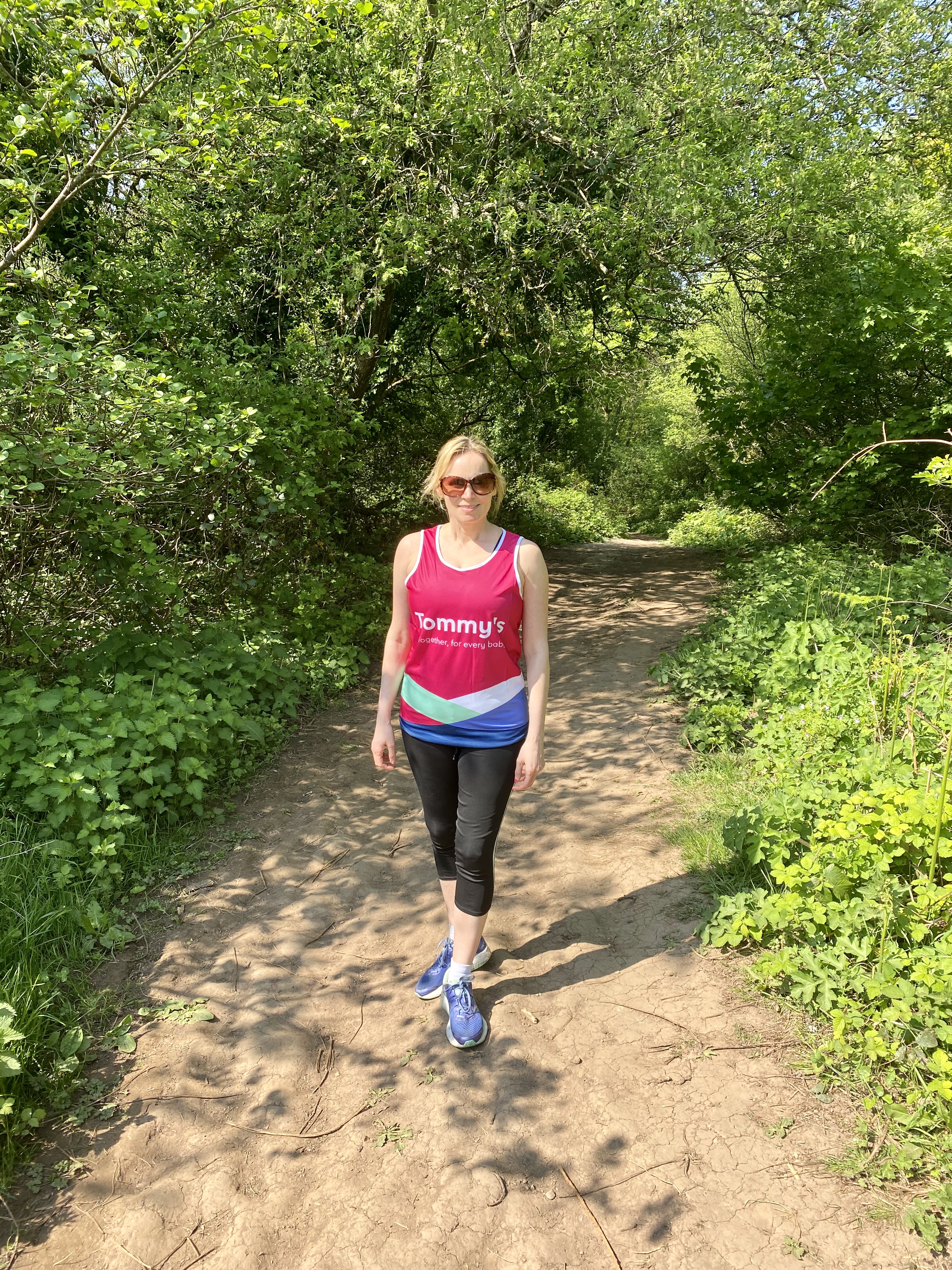 I didn’t run for 17 weeks. I started running again mid-May – I cried on that first run because I had missed it so much. Running helps my mental health so much and it was so tough not being able to run during lockdown.

I started building up slowly, convinced that the rescheduled October date wouldn’t go ahead, despite there being no official announcement at that point. I certainly didn’t have a marathon in my head as I steadily built up my running.

And then came the news that while the elite athletes would race on a closed track in London, the rest of us could do the event virtually, on our home soil, and that we’d get a place to run *in* London the following year. It took weeks for people like me who had a charity place to get confirmation that we would actually have a place in the virtual race. It took weeks for the charities themselves to know what was going on. While we were in limbo, spaces went on sale to the general public. It seemed everyone I knew was signing up… and I still didn’t know if I would be running. It was a stressful couple of weeks.

Confirmation eventually came… but so did another injury. My other knee went suddenly while running, seven miles into a planned 11 mile run. I’d run 10 miles the week before with no problems, so it came as a real shock. I have never not finished a run before and had to call my husband (and kids) to come and pick me up. I’ve never really had an injury before and here was my second in less than a year. It sent into motion a lot of self-doubt and mental anguish.

My husband said to me “there’s no way you can run it now”. Which was probably the best thing he could have said. Because it made me all the more determined.

I won’t lie, it’s been up and down since then, and my training definitely hasn’t gone to plan.

But of course I’m still going to take part. The reasons ‘why’ I want to do this still haven’t changed. I’m not doing this to be the fastest; I’m doing this to raise money and awareness for a cause that is incredibly important to me. 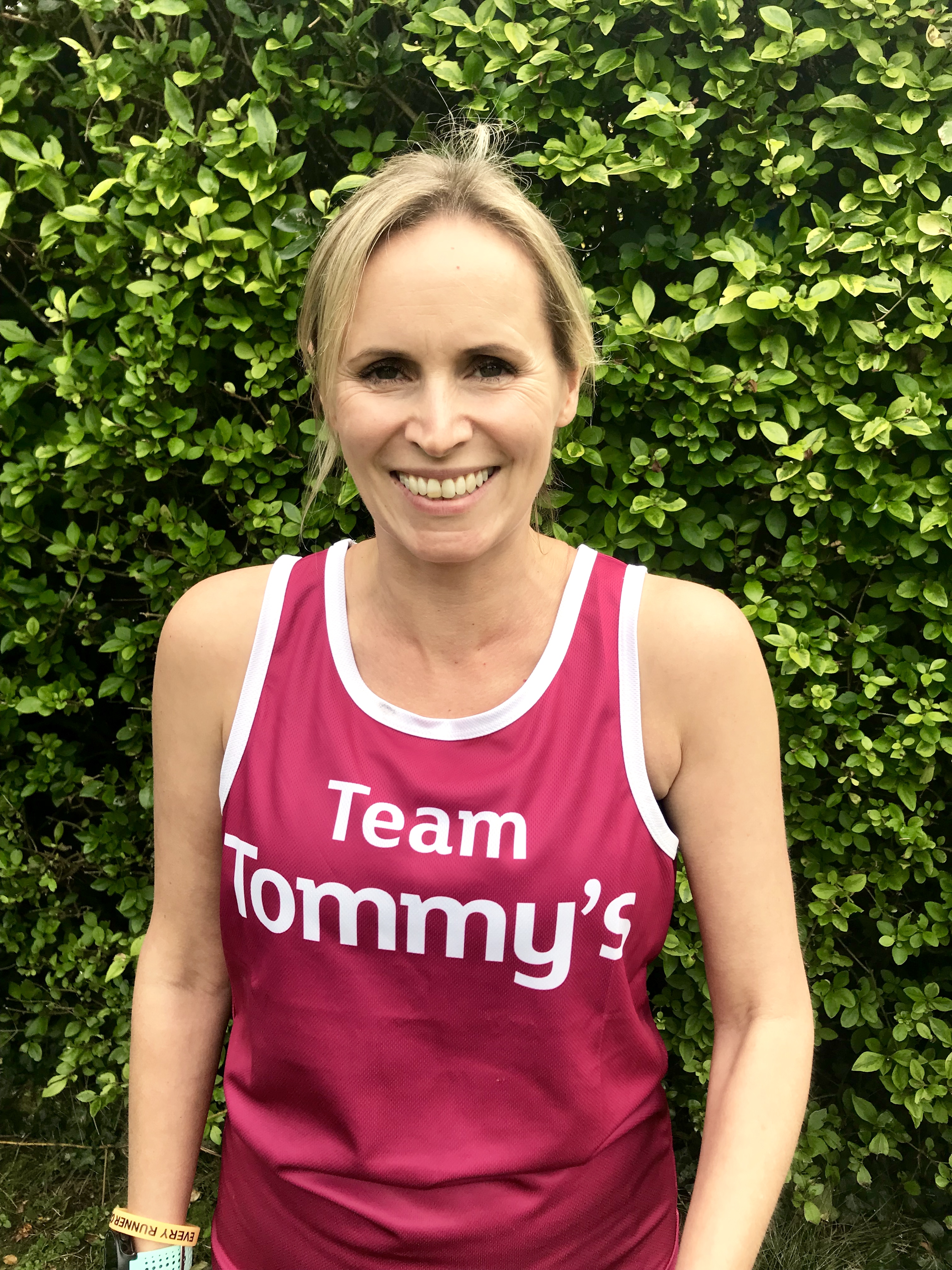 And suddenly here we are, two sleeps (as my children would say) before the biggest physical challenge of my life so far. This Sunday 4 October, 45,000 of us will take part in the very first Virtual London Marathon.

If the event was taking place in London in its usual format than perhaps I would have had to drop out. But this different format means that somehow I will do it. We have 24 hours to complete the 26.2 miles. We can break it up into smaller chunks and we can walk if we need to.

It wouldn’t be wise for me to plan a 26.2 mile route all over Cardiff, so I’m going to be running loops of various distances from my house and back. This gives me the peace of mind that if I need to rest my leg, use the loo, or eat, then I can. And it makes it easier for my friends who have said they will support me to be able to find me.

I have had the support of a good physio over the last couple of months. I will listen to my body and I won’t do anything stupid on the day…. but as I said earlier, no amount of physical pain will ever compare to the emotional and mental pain of losing a baby.

That is my big reason for taking part in the London Marathon. Because I want to raise money for Tommy’s, to support parents who are dealing with the devastation of losing a baby and to fund research to understand the reasons why so that more little lives can be saved. There are a lot of babies and parents who will be in my heart when I run (and walk) those 26.2 miles on Sunday.

It seems all the more poignant with Baby Loss Awareness Week taking place next week and yesterday’s devastating news for Chrissy Teigan and John Legend that their baby Jack had died following a complicated pregnancy.

The raw pain and grief in their faces in the photos they published on their social media channels broke my heart. But I was shocked to the core by all the comments and criticisms from those who thought these photos should never have been taken, let alone published, and that they shouldn’t speak openly about Jack. That ignorance is exactly the reason why it’s so important when public figures speak out in this way. As well as sharing their own grief, they have the platform to put into words and pictures and to raise awareness for all those who can’t find the words or who feel too ashamed to speak out loud.

My training has not gone to plan at all. I’m worried about my knee. The forecast is not great… it looks like I’ll be doing it in the rain. But this event is really important to me for reasons that aren’t just about running. If you can spare a few pounds towards my sponsorship target (which continues until I hopefully run in London in October 2021) to support Tommy’s, I would be so grateful.

Anything you can spare will make a huge difference to the people supported by Tommy’s and the future little lives that will be saved by their research. Thank you so much for your support.

You can sponsor us here.

Homepage » Family life » I’m running the Virtual London Marathon this Sunday for Tommy’s (a story of race postponement, injury, training not going to plan and more)