Beyond the kids Cardiff Theatre reviewsDecember 12, 2017

Thanks to Wales Millennium Centre for inviting me along

I’d read enough reviews and articles about the new touring production of Miss Saigon to know that the general consensus from audiences and reviewers is that it’s incredible.

Having seen the show last time it was in Cardiff I knew I was going to love it. I just didn’t expect it to be quite so all-consumingly mind-blowingly incredible.

Every moment of this new production – re-staged to celebrate the 25th anniversary of Boublil and Schönberg’s world-famous musical – moves seamlessly into the next; from the brawling soldiers in the brothels of Saigon to the tender love scenes; from Ho Chi Minh’s oppressive soldiers to the desperation of the Vietnamese people as the Americans are evacuated and they are left behind; through all the humour and heartbreak. I sobbed my way through the second act and left the theatre feeling emotionally wrenched. Not least because much the show is rooted in historical fact and while the characters might be fictional the context is not.

Based on Puccini’s 1903 opera Madame Butterfly, Miss Saigon is set during the Vietnam War and tells of Kim, a 17 year old left orphaned by the war. She finds herself working in Dreamland, a bar and brothel frequented by American soldiers. Innocent and virginal and a far cry from the other streetwise girls she works with, she falls in love with Chris, an American GI who is sensitive and kind and nothing like the other drunk and violent soldiers. However, the fall of Saigon means the two are torn apart. Neither knows what has become of the other until three years later when a now-married Chris learns that Kim has borne him a son. A heartbroken Kim – who has believed for all these years that her hero will come to rescue her – makes the ultimate sacrifice so that her child can have the life she could never provide for him. 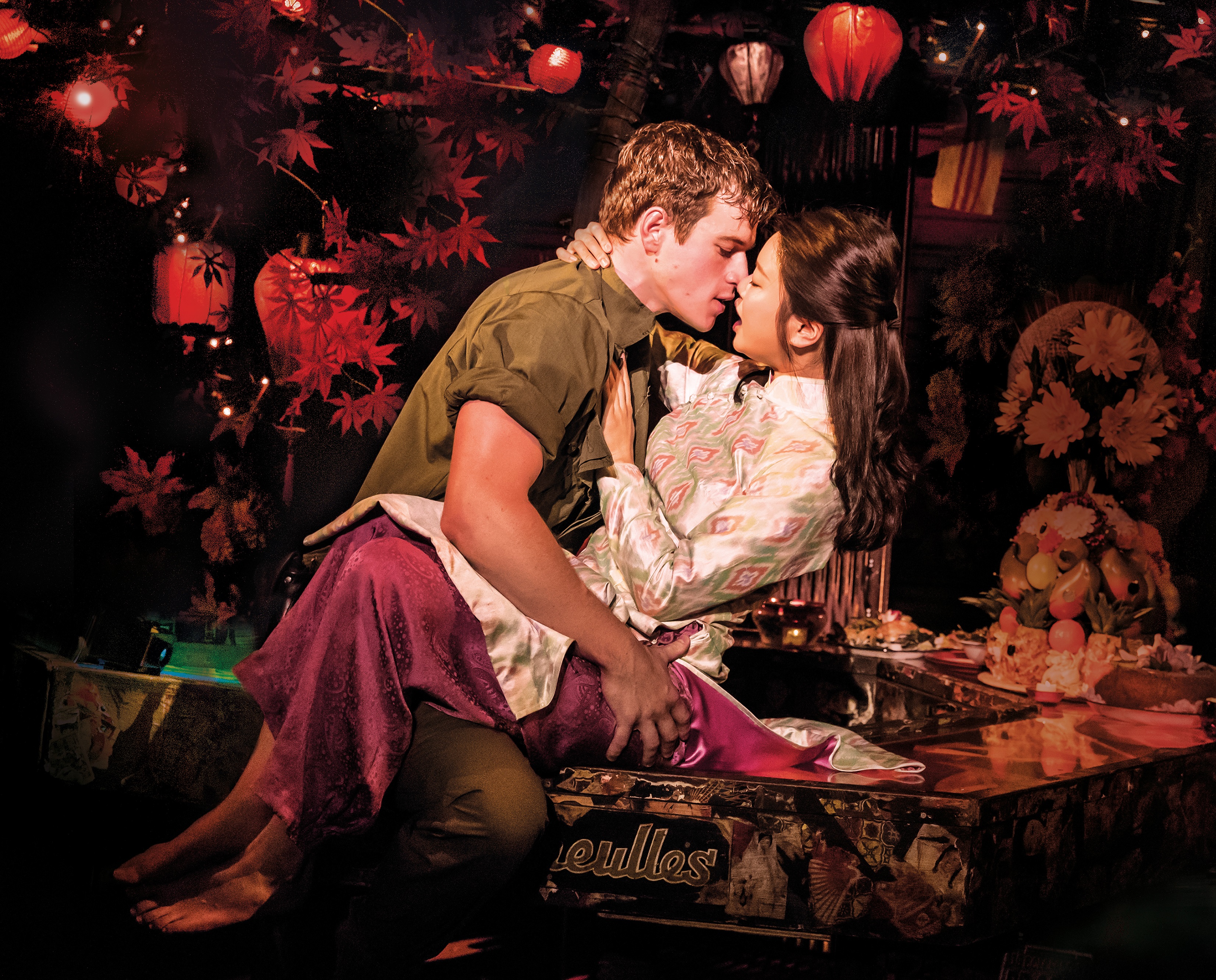 Kim is played by Sooha Kim – a Korean performer who has previously played the iconic lead role in Japan and London. From the moment she begins to sing you can absolutely see why she has been cast in the role. Her vocals have such a melodic; both smooth and velvety but light and airy too. Her delicate and tender tone makes her so convincing as the innocent peasant girl. The Movie In My Mind – her duet with Na-Young Jeon who plays hardened bar girl Gigi who dreams of a life away from the struggles in Saigon – was one of my favourite musical moments. Likewise, her duets with Ashley Gilmour as Chris are passionately believable. As my friend who accompanied me to the show said “Their love feels so real. I’m up on the stage with her; falling in love with my GI.” 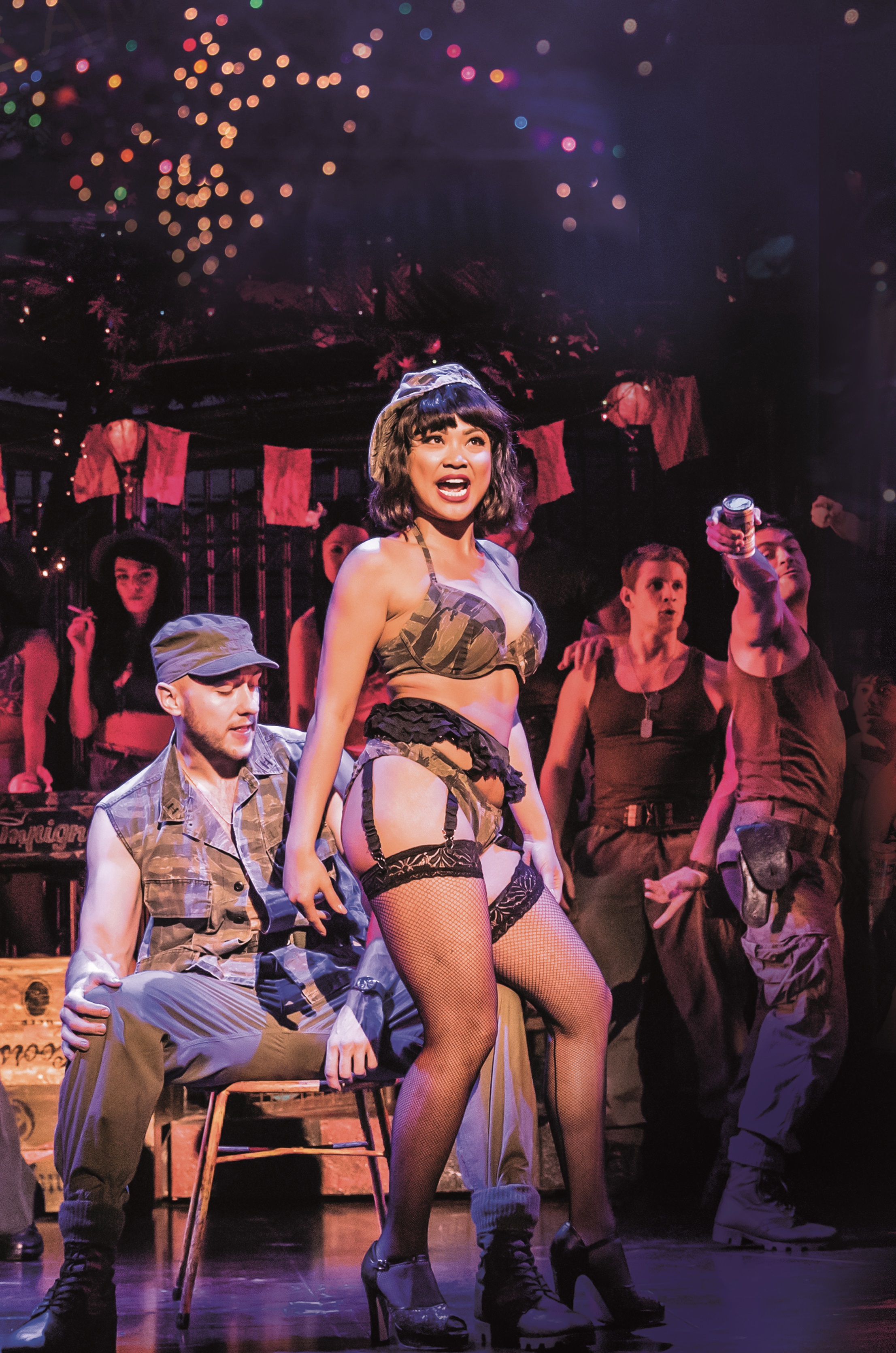 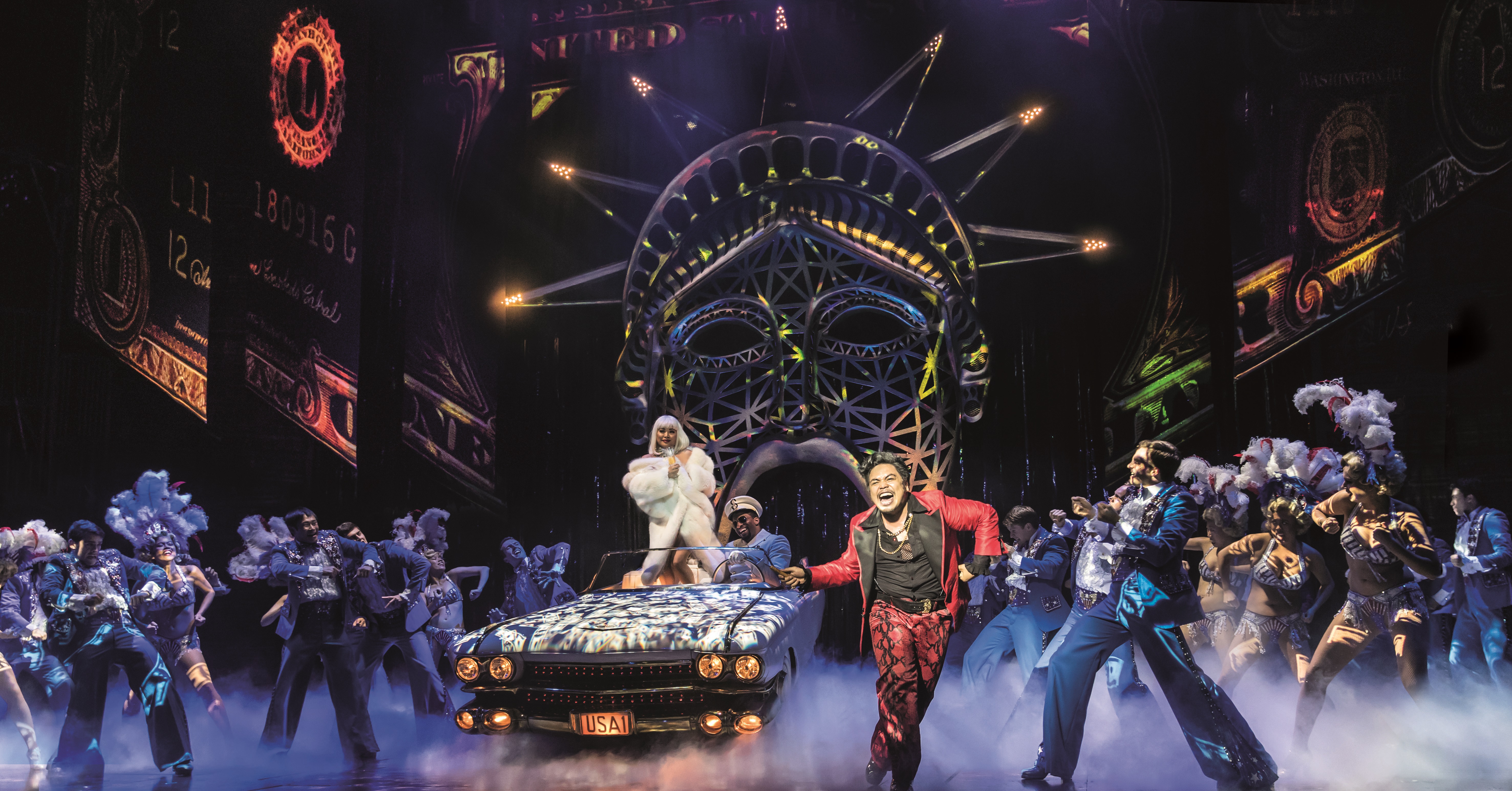 Red Concepción (what an amazing name!) plays The Engineer, owner and pimp at The Dreamland bar. He’s not a nice character; bullying and coercing the young women working for him; often violent. He uses those around him for his own gains and puts his own interests ahead of anyone else’s. However Red is so charismatic and fascinating to watch that the audience is instantly drawn into this character. He brings a lot of humour to his big musical number The American Dream, which is a real stage spectacle complete with feather-clad showgirl dancers and a vintage American car on stage. 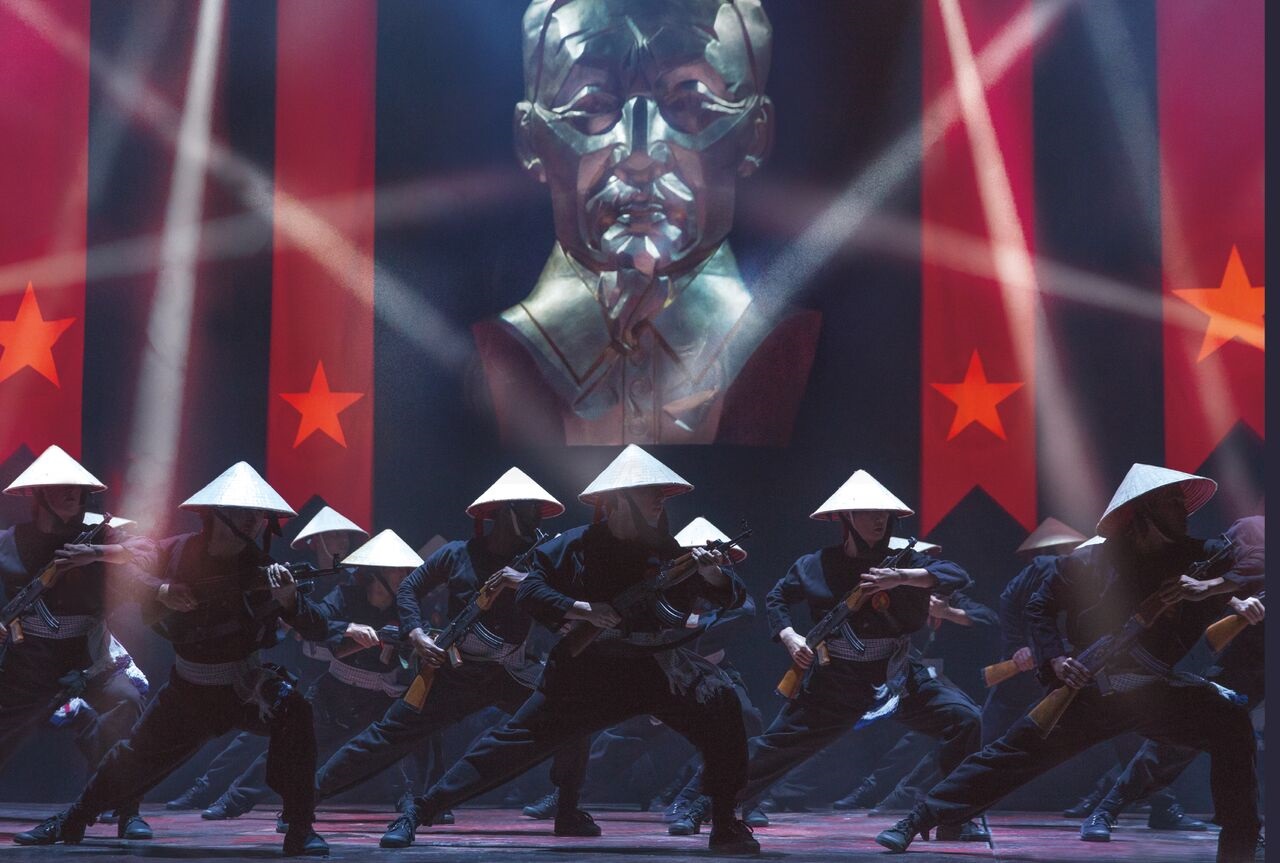 One of the most powerful scenes in the show is The Morning Of The Dragon, set in what has now been named Ho Chi Minh City. The North Vietnamese army march onto the stage. A huge statue of the head of revolutionary leader Ho Chi Minh looms above; rows of Vietnamese flags hang from either side of the stage. The soldiers move in slick dance formation; some of them masked; some of them acrobatting across the stage. A dragon appears with smoke emerging from its nostrils. The result is menacing, eerie and oppressive. It’s such a contrast to the previous love scenes between Kim and Chris that I found myself holding my breath with nervous tension.

Just as dramatic is the ‘flashback’ scene where the American soldiers must leave Saigon and the desperate Vietnamese people including poor Kim are left behind. It’s well publicised that a real helicopter emerges onto the stage so this shouldn’t be too much of a spoiler. But the theatrics of it were incredible, with the deafening sounds and lights coming from all over the auditorium. The sight of the Vietnamese people trying to climb into the American embassy in hope that they will be rescued is harrowing. 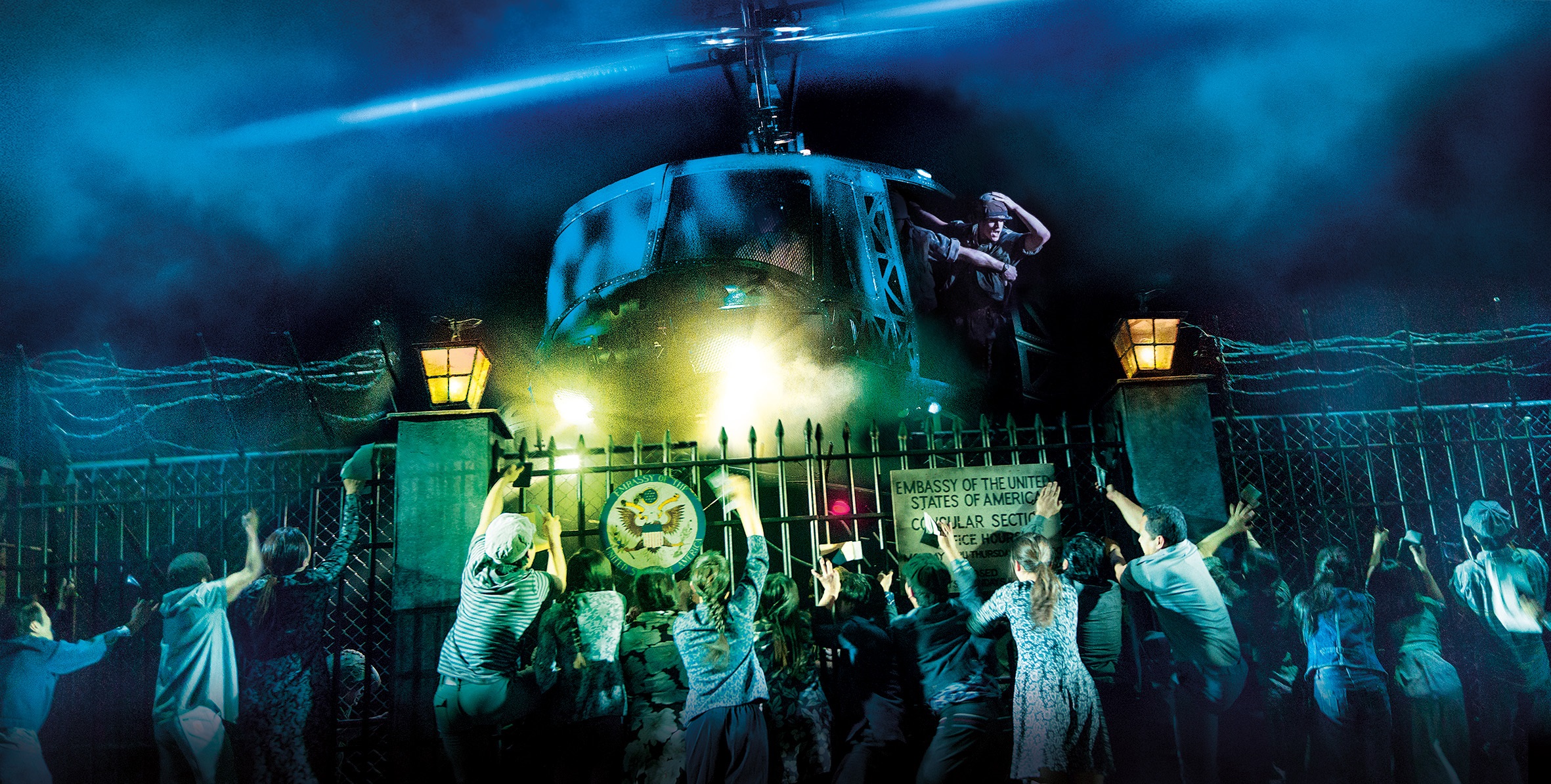 Special mention must also go to Joaquin Flores who plays Tam – one of several small children rotating in the role of Kim’s son. He must only be around four or five years old but was so compliant with what was expected of him; I’m not sure if all children his age would have handled such a task in front of a packed audience so well. He looked so small and vulnerable on that huge stage. 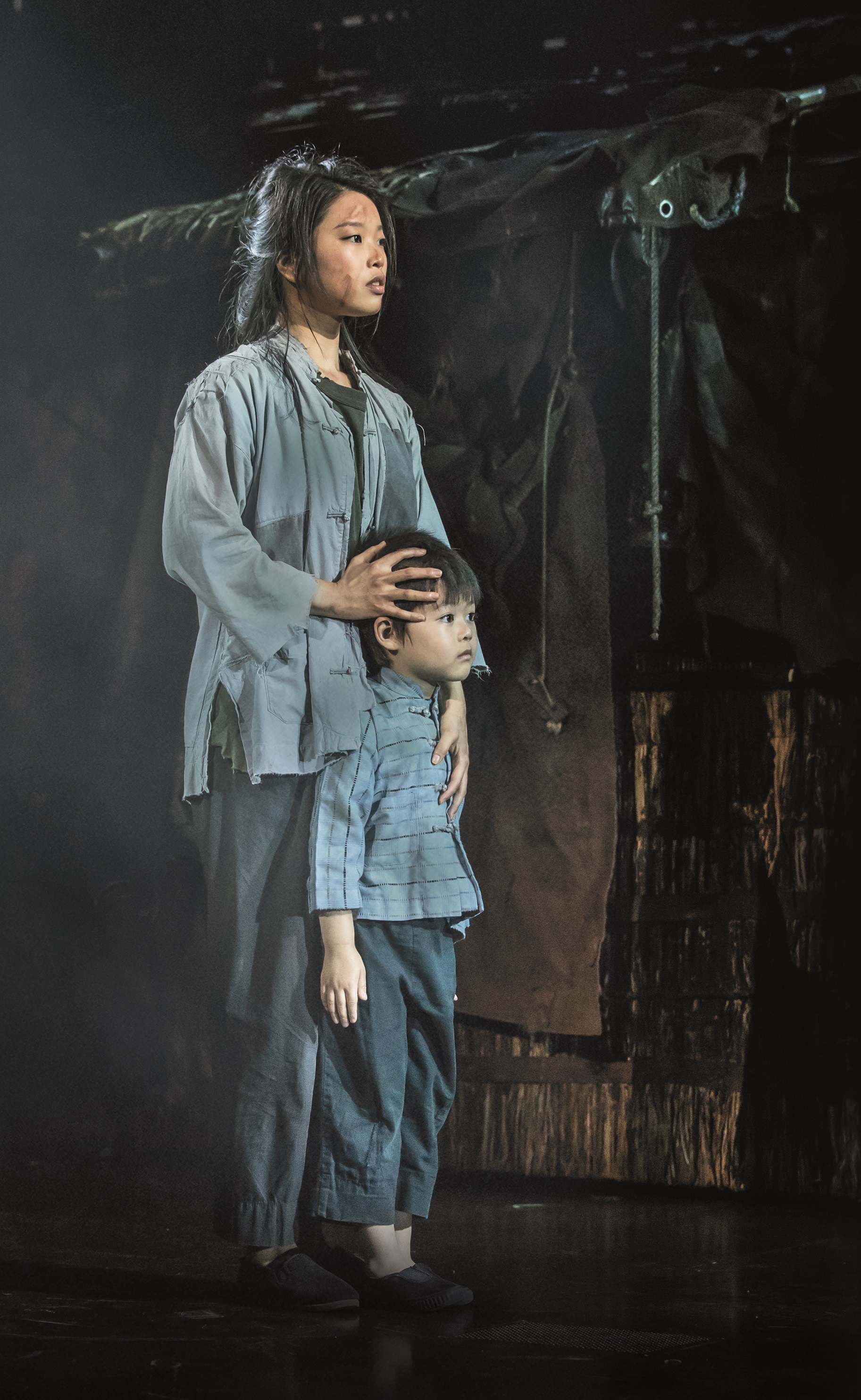 The last time I saw this show was before I had children. Now that I am a mother the idea of this little child living in the back streets of Ho Chi Minh City and a mother being so desperate she would sacrifice herself for her child is even more heartbreaking than I remember. Likewise the opening of act two which features a video montage of the Bui Doi – the countless children fathered by American soldiers and abandoned had me reaching for the tissues.

The version of Miss Saigon currently showing on Cardiff is the full West End production, rather than a scaled-down touring version as is often the case. The set and special effects were incredible with every inch of the stage in use.

It’s wonderful to see Cameron Mackintosh putting his faith in regional theatres and I felt so proud that our landmark theatre here in Cardiff is one of a select number of theatres capable of hosting such an ambitious show. And at Christmas too.

This is exactly the kind of blockbuster show Wales Millennium Centre was built for.

Believe the hype; Miss Saigon is an epic spectacle that will stay with you long after the curtain closes.