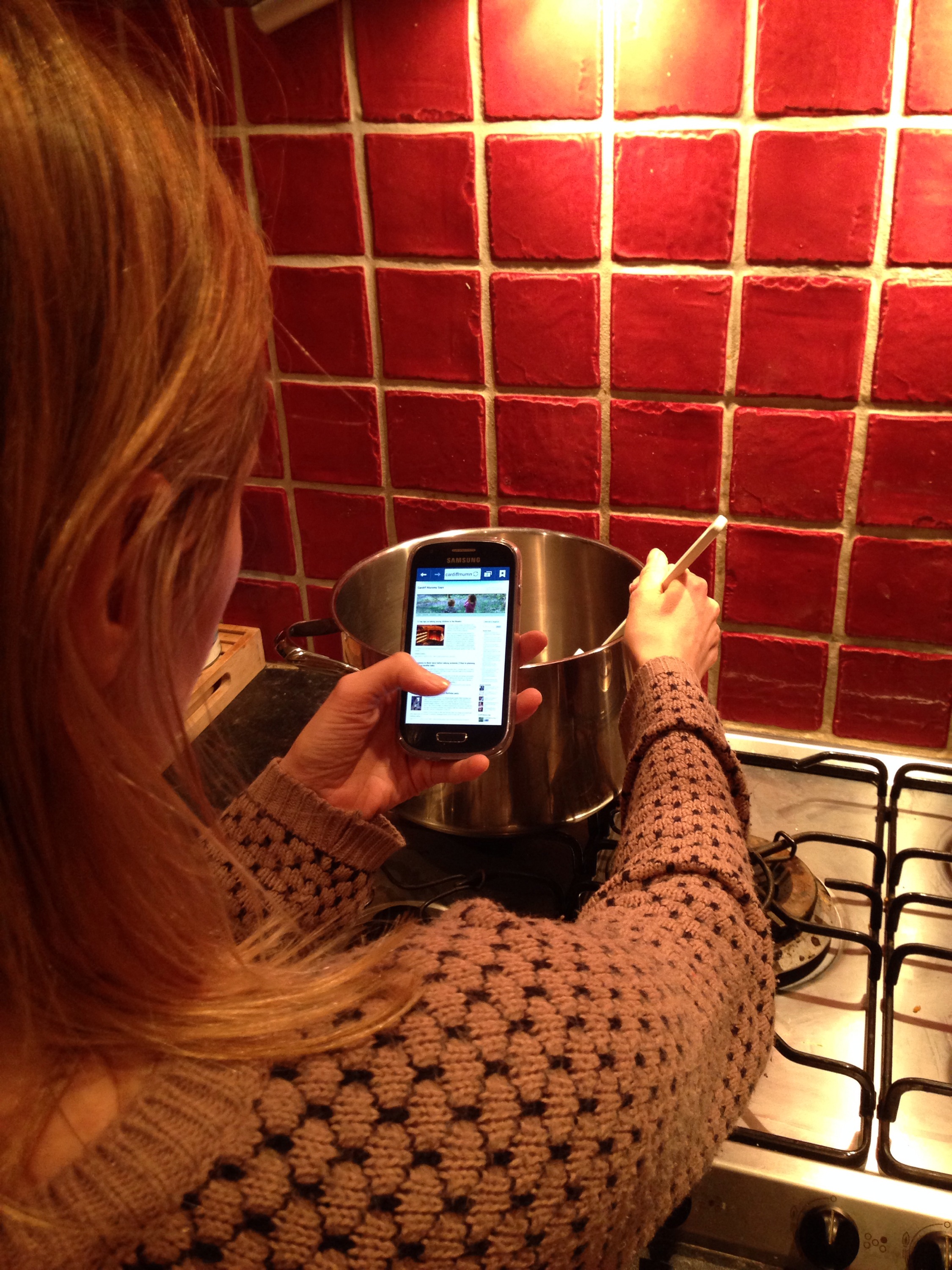 I’m currently nearing the end of maternity leave with baby number three. When I do work, I’m mostly a work-from-home journalist. This means I sometimes have days when I don’t have a significant conversation with any adults other than my husband. I love chatting to other mums at baby and toddler groups and I love the school gates chats – but sometimes I want to connect with friends I don’t see very often and sometimes I want to talk about things other than my children.

And that’s why I love my smart phone because it is the ultimate multi-tasking tool that lets me do all of those things while doing something else.

I am not so attached to my phone that I am one of those mums who misses her own children’s milestones because she is too busy liking photos of other people’s children’s milestones on Facebook, and I definitely restrict my phone use when they are around. However, I am the first to admit I love Facebook and Twitter and Pinterest and my WordPress blogging app. I’m considering joining Instagram too but I’m so far resisting as it’s difficult to keep up with the accounts I already have as it is.

That’s the problem with social media. To get the most out of it, you need to do it properly and that takes time. And as I said, I have three children and a job (which relies heavily on social media), so I don’t have much spare time. That’s why I’ve learnt how to be sneaky with it.

Here are 10 places I check my smartphone and social media where I probably shouldn’t.

1. While pushing the double buggy

My children face forward. I can push it one-handed. They can’t see my phone. I can have a conversation with them while texting, so this is guilt-free smart-phone useage.  Just got to make sure not to walk into any trees or lamp-posts.
2. While breastfeeding

What did new mums do on night feeds before smart phones? Or any feeds when you are at home with a baby engrossed in his or her milk and oblivious to anything going on around them? I know both my breast and bottle-feeding friends have perfected this one!

I had this romantic image that I would read books while feeding my baby. But they were too heavy to hold one-handed and kept sending me to sleep at night. Instead, myself and my NCT friends would have full-blown conversations throughout the night, and I’d get the chance to catch up on all the interesting posts I didn’t get to read in the day. I love that my children sleep so well, but I miss that middle-of-the-night club.

3. While playing hide and seek

If you count slowly to 20, you can check your Facebook news feed while your children run off to hide. If you find a really good hiding place when it’s their turn to seek, you can probably comment on a few photos too.

Yes, I know it’s gross but I also know that all my mum friends do it too as it’s one of the only times of day we get a moment to ourselves. And it usually is only a moment before someone bursts in. It’s the digital equivalent of taking the Sunday newspaper to the bathroom.

6. While I’m supposed to be cleaning
I am the first to admit I struggle to keep on top of the housework with three children under five and a job. I’m also the first to admit that I’d get an awful lot more done if I wasn’t checking my phone at the same time too while Cardiff Daddy is downstairs playing with the kids.
7. Or while cooking
Ditto what I said above. So far I’ve never dropped a phone in a pan of food.
8. While hubby drives the car and I’m in the passenger seat

Just like the double buggy, no one can see me and I can have a conversation at the same time so it doesn’t count.

9. When hubby pops out of the room on date night

We have a no-phone rule on date night. But if he’s popped to the kitchen to get something, those 30 seconds don’t count, right? The phone is always out of my hand by the time he gets back.

10. When friends pop to the bar or loo if we’re in the pub
I’m not one of those people who sit glued to their phones instead of talking to the person they are socialising with. Of course, there are the odd texts that pop up and need reading or replying, and I glance at the screen every so often to make sure there have been no emergencies at home,but I like to give my friends the dignity of being in their company. However, the minute I’m sat at that table alone… quick… Twitter…. Facebook… oh, what’s that, I’ve been tagged by Friend in So-and-so-bar. While my friend is on the loo. See, I told you everyone did it!

Do you sneakily check your smart phone in places you shouldn’t? Do tell all! Tweet me on @cardiffmummy or join in the chat on my Cardiff Mummy Says Facebook page.