I’m often asked what books we recommend so at the start of 2019 I started a new monthly series where we share the books we have loved reading over the previous month. You’ll find all sorts here from new releases to old favourites: a mixture of fiction and factual as well as picture books and chapter books. Some we own ourselves; others are borrowed from our local library. Read on for our favourites from February, and click here for our January recommendations. 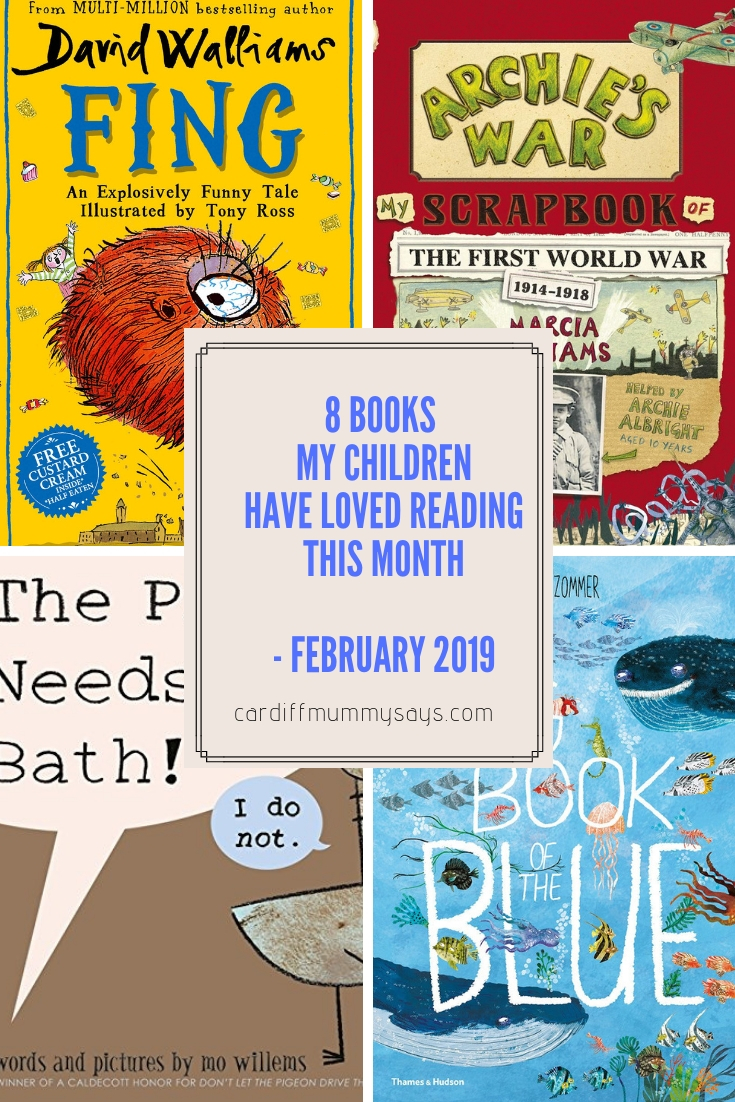 The Pigeon Needs A Bath by Mo Willems 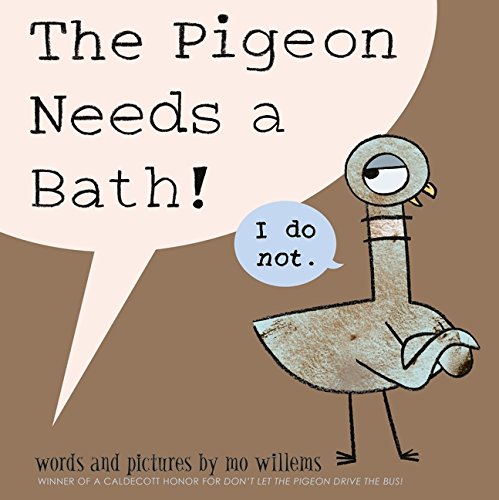 My four year old son picked this book up at the library, along with another in the series Don’t Let The Pigeon Drive The Bus. They’re very simple books with a small amount of text on each page, and simple images, but our whole family find them brilliantly funny. As its name suggests in The Pigeon Needs A Bath, the pigeon is dirty and smelly and in need of a wash. However he resists for as long as he can making all kinds of excuses. Once in the bath, however, he discovers he loves it and doesn’t want to get out – something all parents of temperamental toddlers will likely relate to. The simple language means by seven year old has enjoyed reading these books by himself. There are several more in the series which we’ll be looking out for on our next library trip. 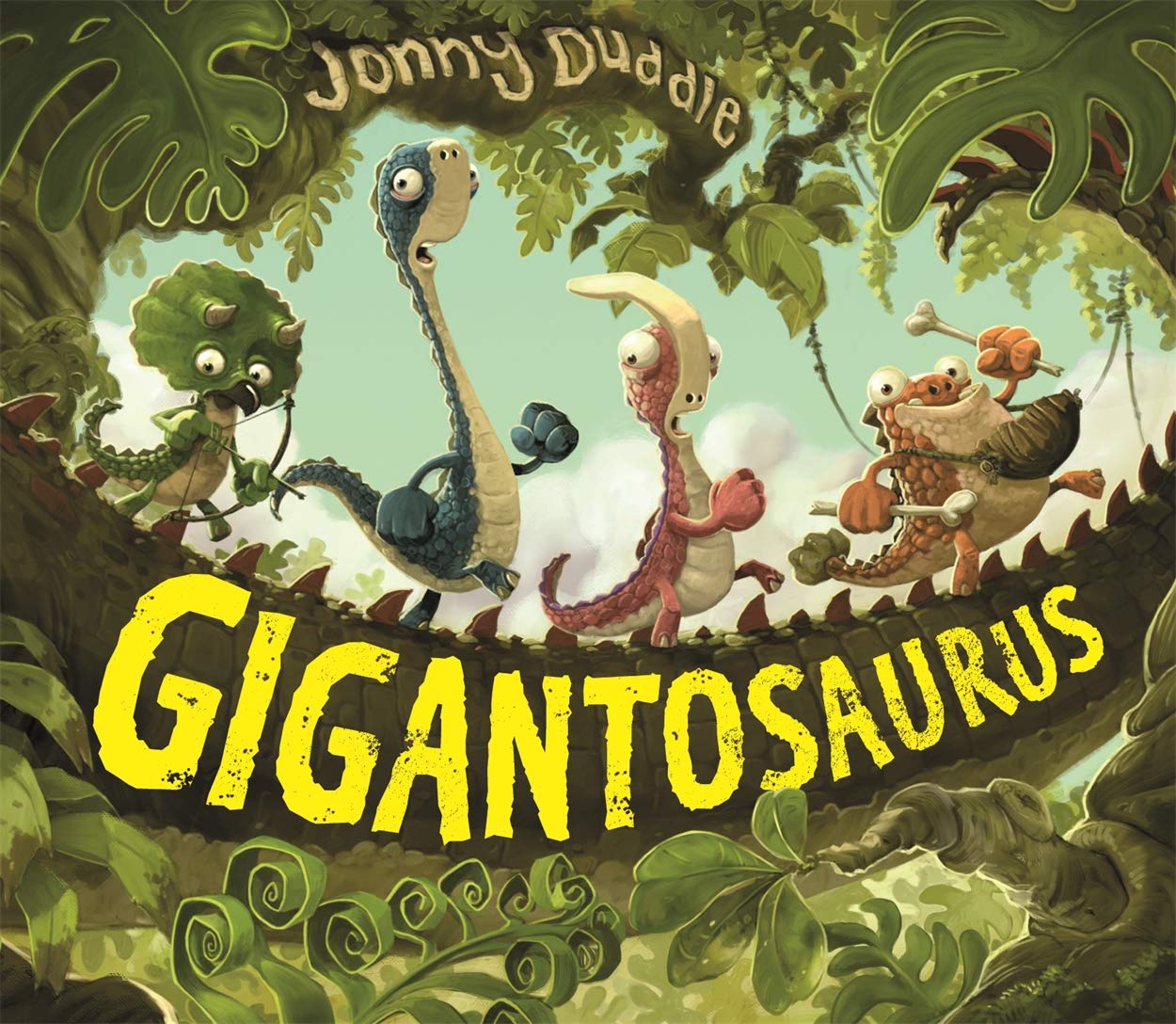 We’ve had this book for a few years now – it belongs to my middle child who is a huge fan of Jonny Duddle’s The Pirates Next Door series. Recently however it’s become of one of my youngest’s most-requested-books-before-bed. He loves dinosaurs and thinks this ‘boy who cried wolf’-style tale is hilarious. It’s about a group of young dinosaurs who have been warned to watch out for the scary Gigantosaurus. One of the gang, Bonehead, acts as lookout whenever the little dinos go to play. However, he thinks it’s hilarious to scare his friends by pretend that the enormous dino is on its way… until after being tricked one too many times the Gigantosaurus is on its way they refuse to believe Bonehead when he does actually show up. This longer picture book is filled with fascinating illustrations, facts about dinosaurs at the end and a fold-out page too. 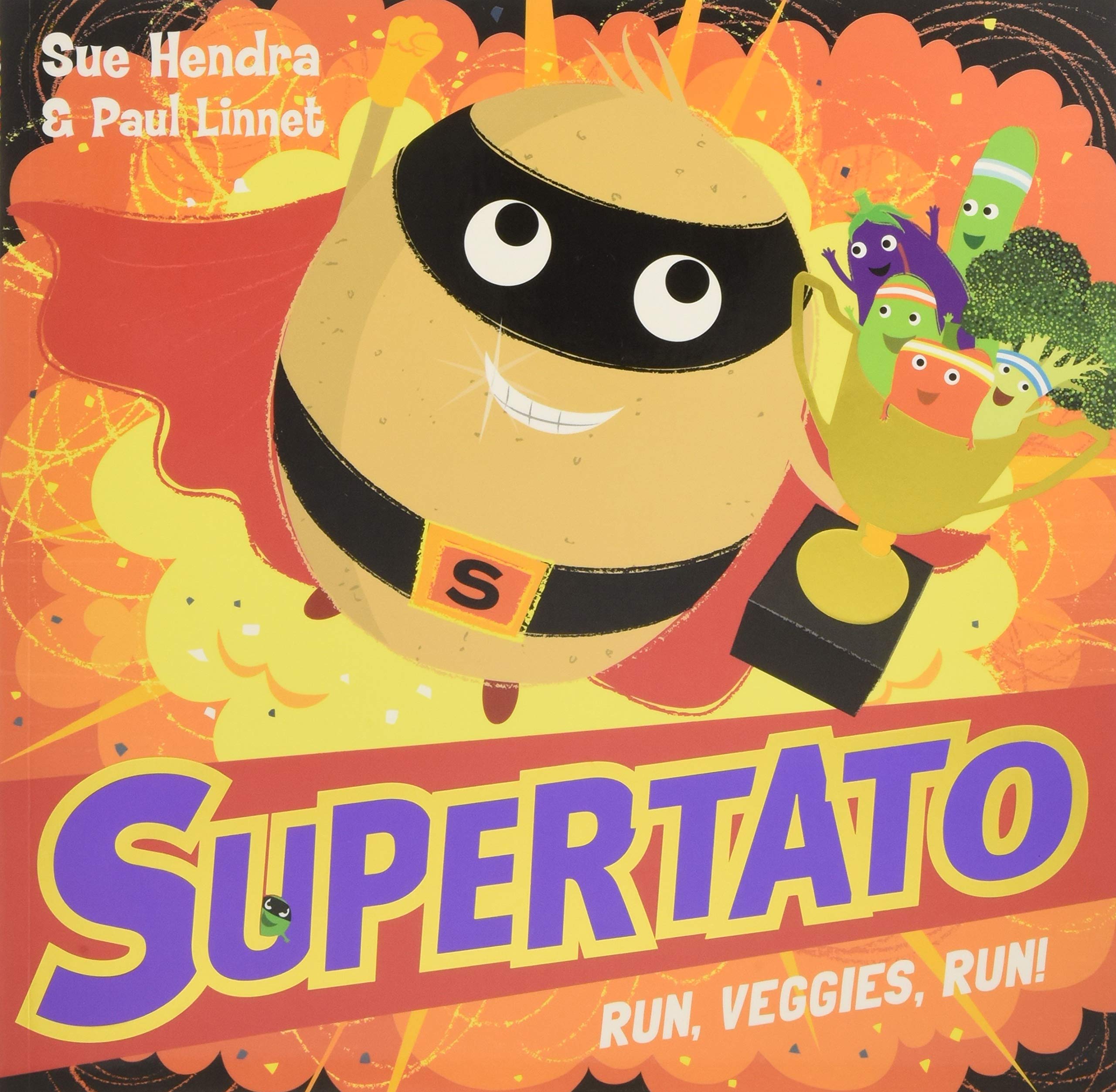 We’re huge fans of the original Supertato book and were pleased to pick up some the follow-ups in the library recently, including Run, Veggies, Run in which Sports Day comes to the supermarket. All the vegetables are in training. However, when a new competitor joins the event, accompanied by The Evil Pea (who my children love), and determined to win, things don’t seem right and it’s up to Supertato to foil the plan. It’s not quite as strong a story as some of the others in the series, but my children love it nonetheless. We have a few other books by Sue Hendra and Paul Linnet, including Barry The Fish With Fingers and Norman The Slug With The Silly Shell and they’re all witty and quirky good reads.

The Big Book of the Blue by Yuval Zommer 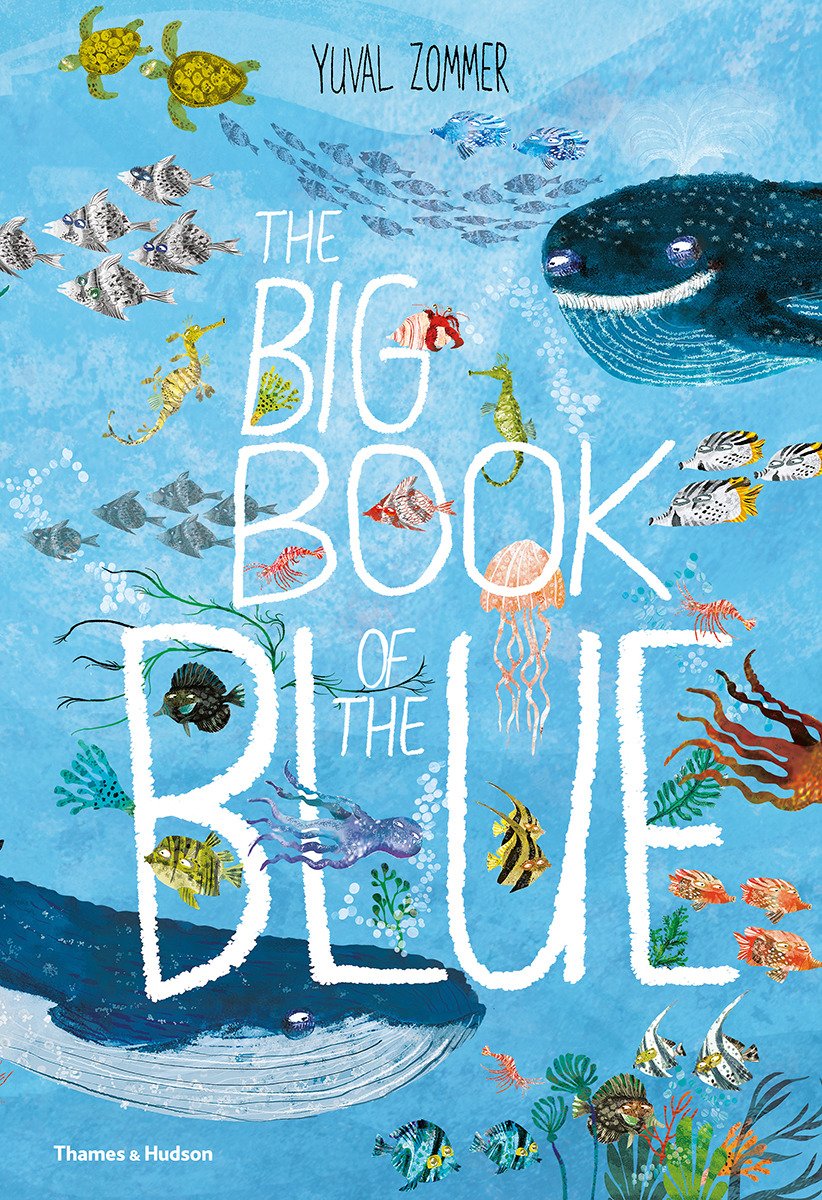 We first came across this book last summer when we attended a session with author Yuval Zommer as part of our role as blogger ambassadors for Cardiff Children’s Literature Festival. We loved the book and bought our own copy at the end of the session, which Yuval signed. My children have loved looking at it over the last year but with my daughter learning more about the plastic plight facing our oceans in school The Big Book of the Blue has been getting a lot of attention in our house recently. All three of my children keen to learn more about the creatures of the sea and she even took it into school where her teacher has been reading it to the class. The book itself is beautiful – an oversized hardback covered keepsake book packed full of fascinating information and facts about creatures from the sea. Each page is filled with illustrations and bite-sized facts. The language is really accessible even for younger readers, but it’s filled with so many facts and information. My three are forever telling me little snippets they have picked up from this book. There are others in the series too including The Big Book of Beasts and The Big Book of Bugs which are on our wish list.

(Yuval will be back in Cardiff for this year’s Children’s Literature Festival. Details here.)

The Iron Man by Ted Hughes 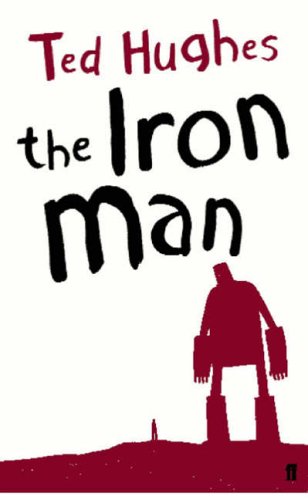 Cardiff Daddy is currently reading this to our seven year old son. It was a book I loved as a child and I’ve already read it to him once, keen to rediscover a book a first read as a child myself  – but he liked it so much he’s asked for it again. The 1968 classic is subtitled “a child’s story in five nights” and its short chapters make for ideal bedtime reading. Billed as a “modern fairy tale” it’s about a mysterious giant metal man who causes chaos on the countryside by eating all the metal farm equipment. The humans are not happy and try to trap him – but when the planet is threatened by a monster from outer space, The Iron Man saves the world. There’s also a 1993 sequel, The Iron Woman, which my son is keen to read next, in which the mighty metal giant comes to take revenge on mankind for polluting the seas, lakes and rivers. 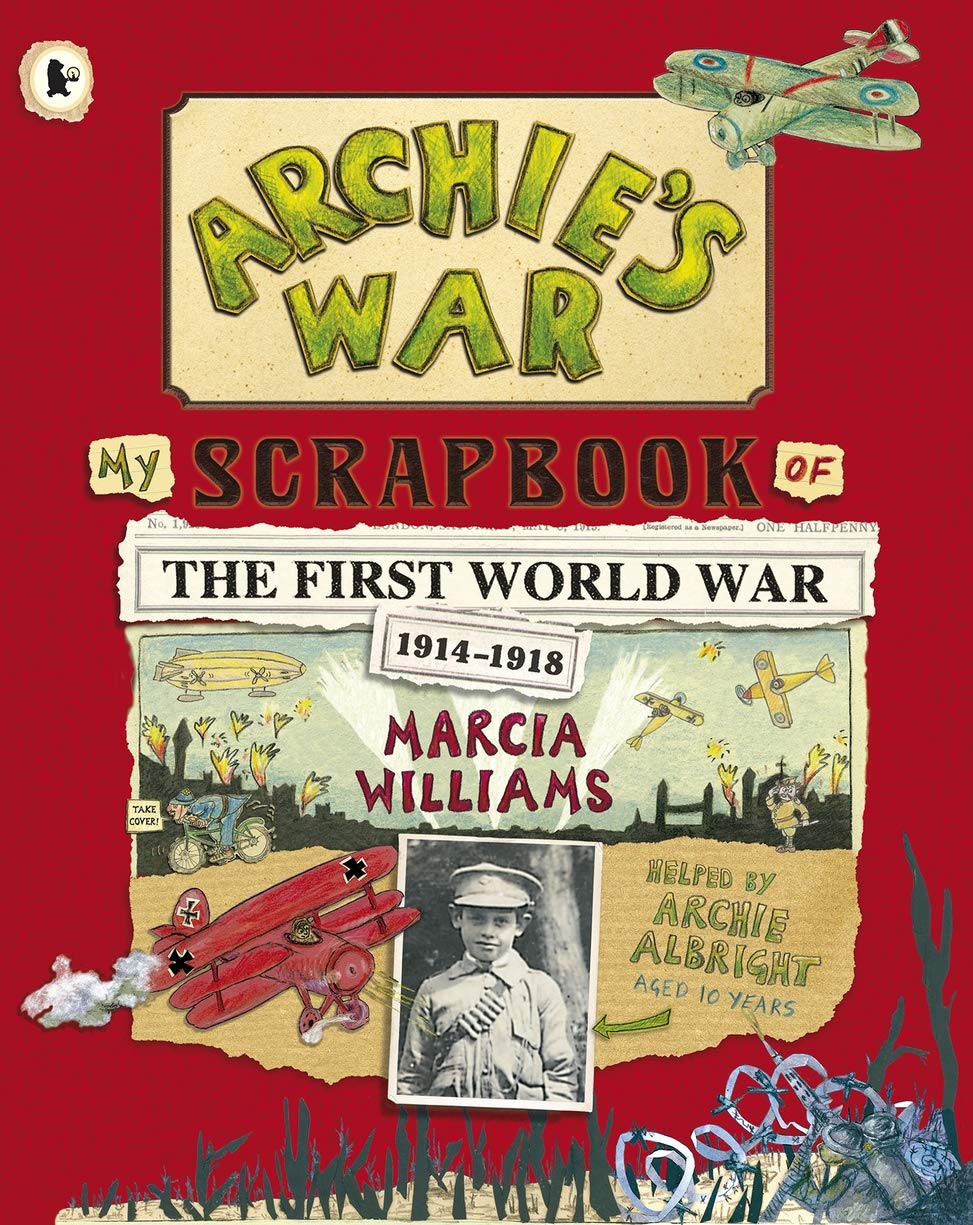 I was so pleased to find this book in a charity shop for just £1. It’s been on my wish list of books I wanted to buy for my children for ages, ever since I saw it in a display of books marking the centenary of the end of the First World War. Written in the style of a scrapbook, each page is filled with comic-style pictures drawn by 10-year-old Archie, anecdotes about life in London’s West End during the war, letters from his dad and uncle who are fighting in France, his everyday likes and dislikes. It’s an easy book to dip in and out of, choosing a page or two at a time to read, but there’s so much information and emotion packed into each thoughtfully-designed page that there’s plenty for children (and grown ups) to discover. Also on my wish list is a Second World War equivalent by the sane author, My Secret War Diary, by Flossie Albright. It’s written from the viewpoint of Flossie who is just nine when Britain declares war on Germany in 1939 and her father leaves to join the army. 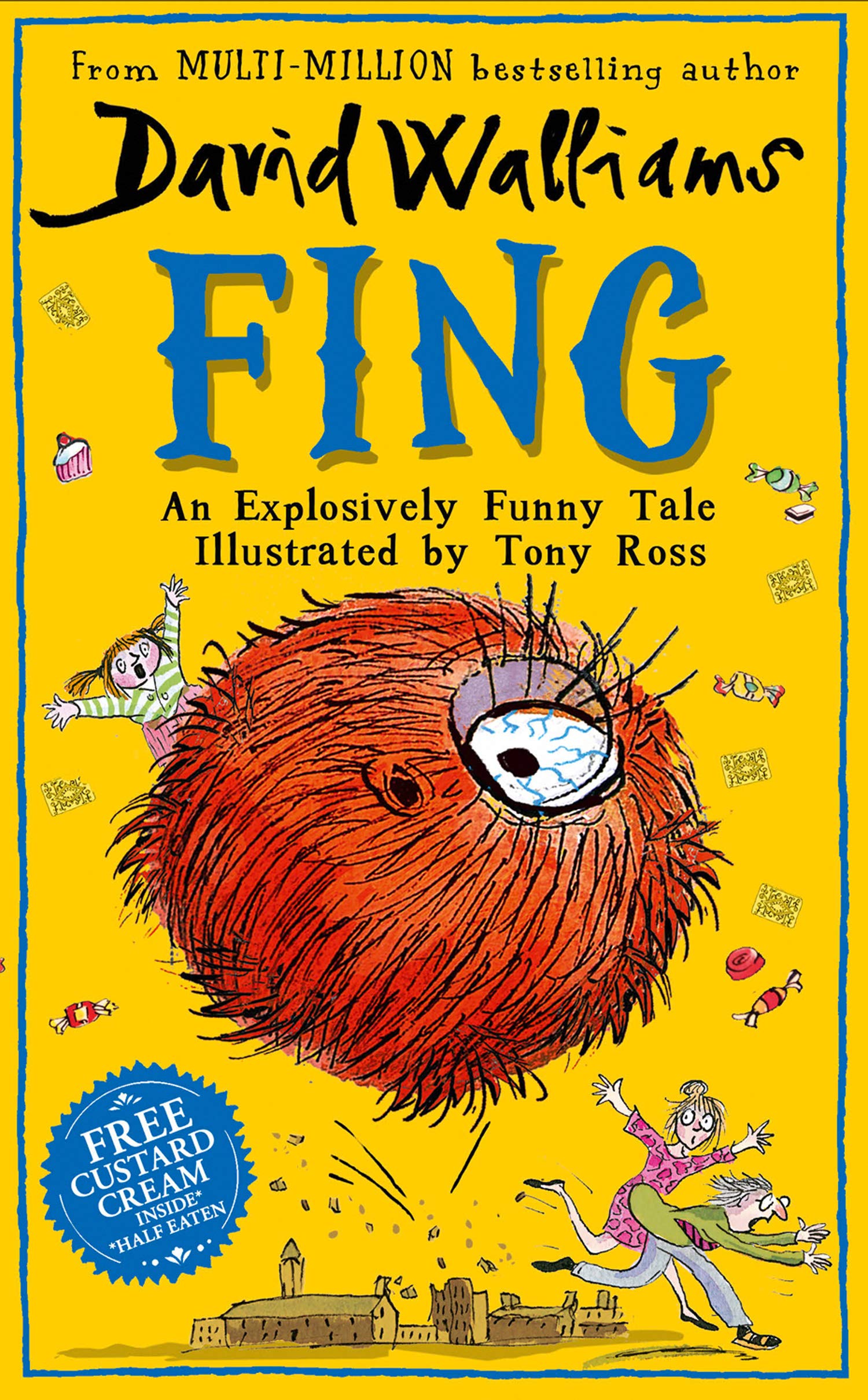 This was my nine-year-old daughter’s favourite new book for February. She’s a huge fan of David Walliams and was really excited to spot the bright yellow cover of his latest book which hit the shops just in time for half term here in Wales. She bought it with her pocket money and devoured it in less than two hours. It’s aimed at children aged 7+ and although I haven’t read it myself she tells me it’s “really good”, “funny”, “adventurous” and “filled with descriptive language and funny pictures which help explain it all”. Fing tells the story of Myrtle Meek, the loud and demanding daughter of two quiet librarians. When Myrtle demands a Fing her parents have no idea what one is and so head on a quest from the forbidden vaults of the library, through the pages of the mysterious Monsterpaedia, and to the farthest corners of the jungle, to discover what a Fing is. 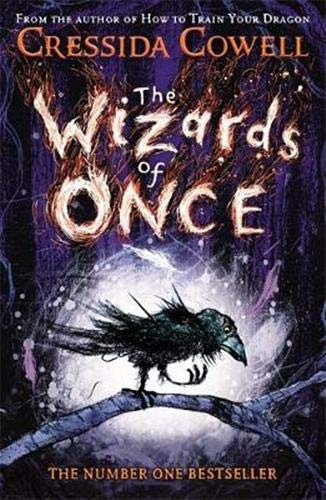 The new series of children’s novels from How To Train Your Dragon author Cressida Cowell has my nine-year-old daughter hooked. She was given one of the books as a birthday present and bought the other one soon after. She tells me they’re based in ancient times when wizards and warriors were enemies and both stories are full of adventure, suspense, slightly scary moments but plenty of humour too. The books tell the story of an unlikely friendship between Xar, a wizard boy who has no magic and is desperate for the ability, and Wish, a warrior girl who owns a banned magical object which she will do anything to conceal. I’ve started reading the first book myself and, just as my daughter says, the fantasy adventures are “exciting and funny” with strong and likeable teenage leads and thrilling plotlines. The third in the series will be released in September. 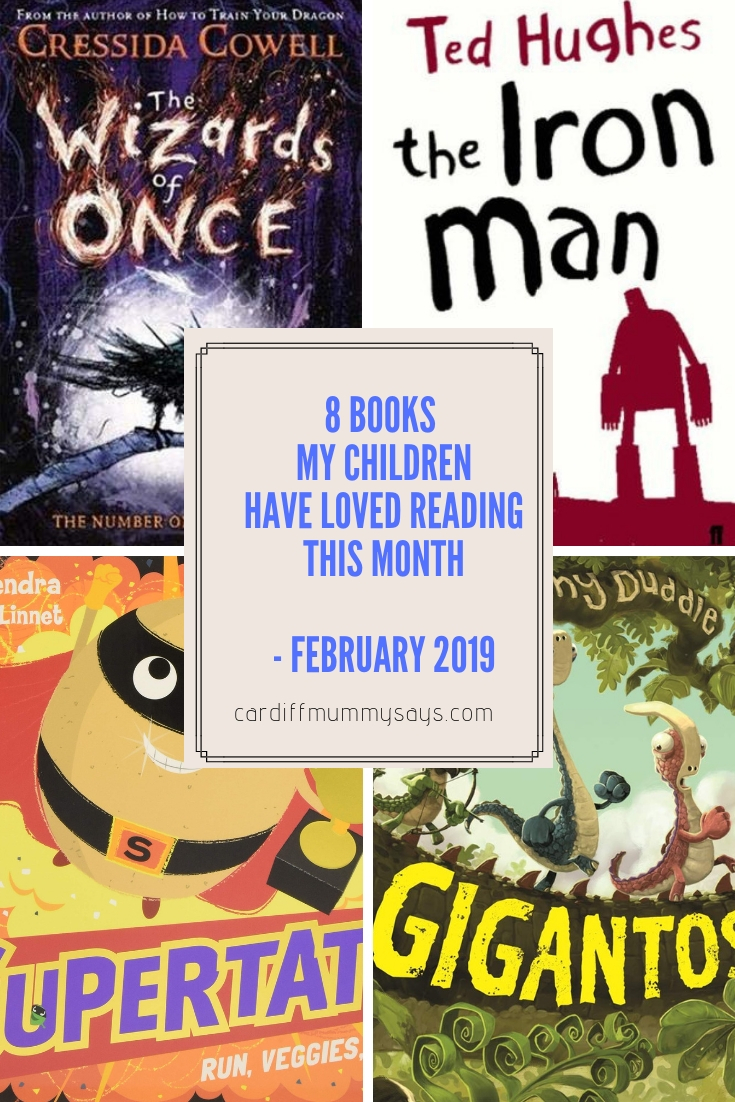 Homepage » Books » 8 books my children have loved this month (February)