Isham Kasi’s face beams with excitement as he pushes open the door and enters Rebounders. His eyes light up and a big grin appears as he sees the trampolines in front of him. He proudly shows his Pokémon t-shirt to his coach Carmel Royston and waves to some of the other children he’s got to know in his weekly class.

The eight year old has been attending sessions at Rebounders for around a year. Based on Cardiff’s Ocean Way, the centre specialises in trampolining for children and adults with disabilities and Isham’s parents say it’s made a massive difference to his life. 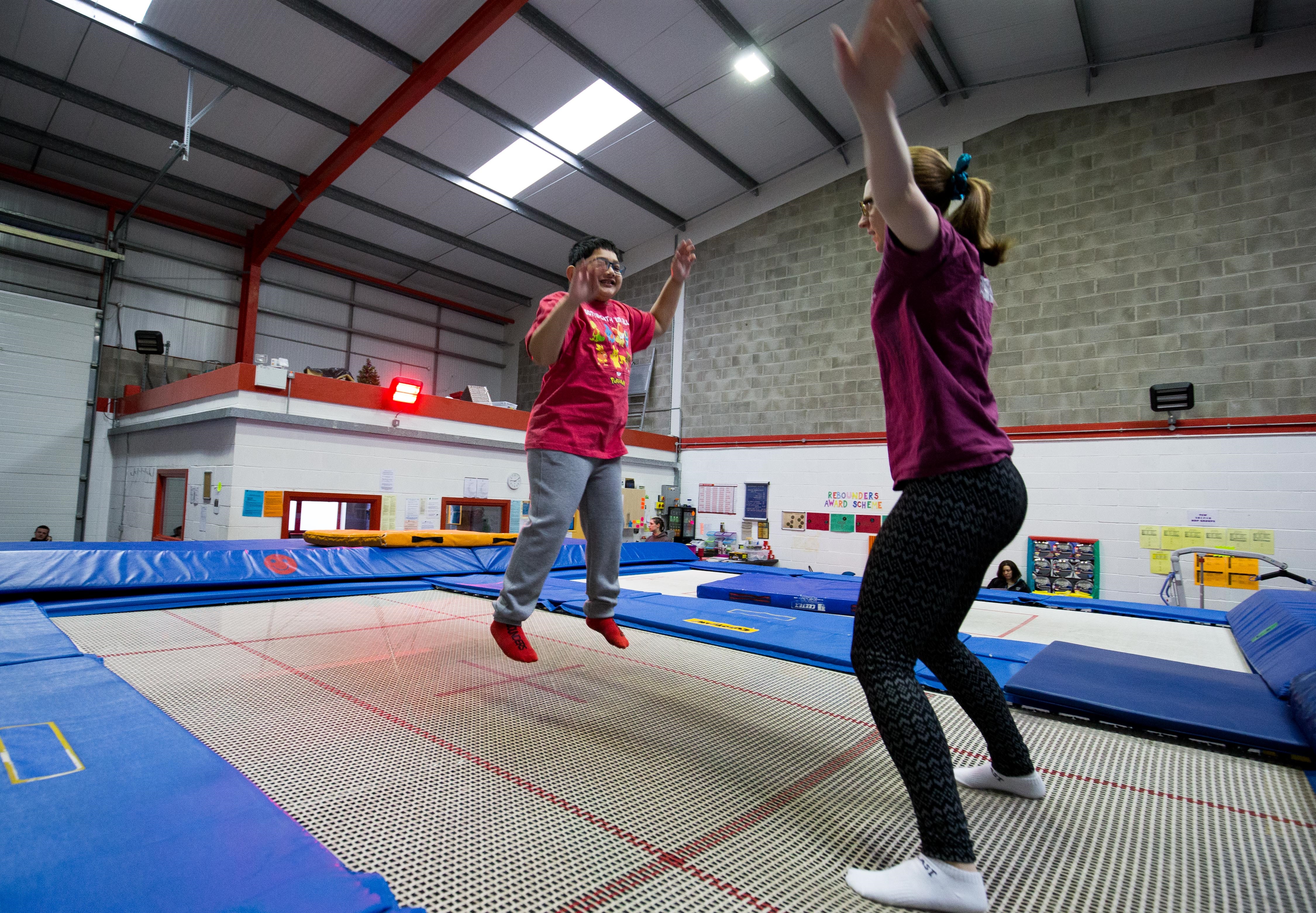 Isham Kasi used to have difficulty climbing, sliding, jumping but has become a lot more able since joining Rebounders

“Isham has global developmental delay,” explains his father Kasi Govarthan. This means it takes him longer than average to reach certain developmental milestones, such as movement and verbal skills and interacting with others.

“Before Isham started his weekly sessions with Rebounders he never liked PE at school,” adds his mother Abirami Kasi. “He had difficulty climbing, sliding, jumping. He has become a lot more able since coming here. He has gained confidence. He is much more positive.”

It’s also an activity he can do with his younger sister Neha, age 4. She doesn’t have any additional needs but the two siblings being able to participate in a safe space together benefits the family hugely. 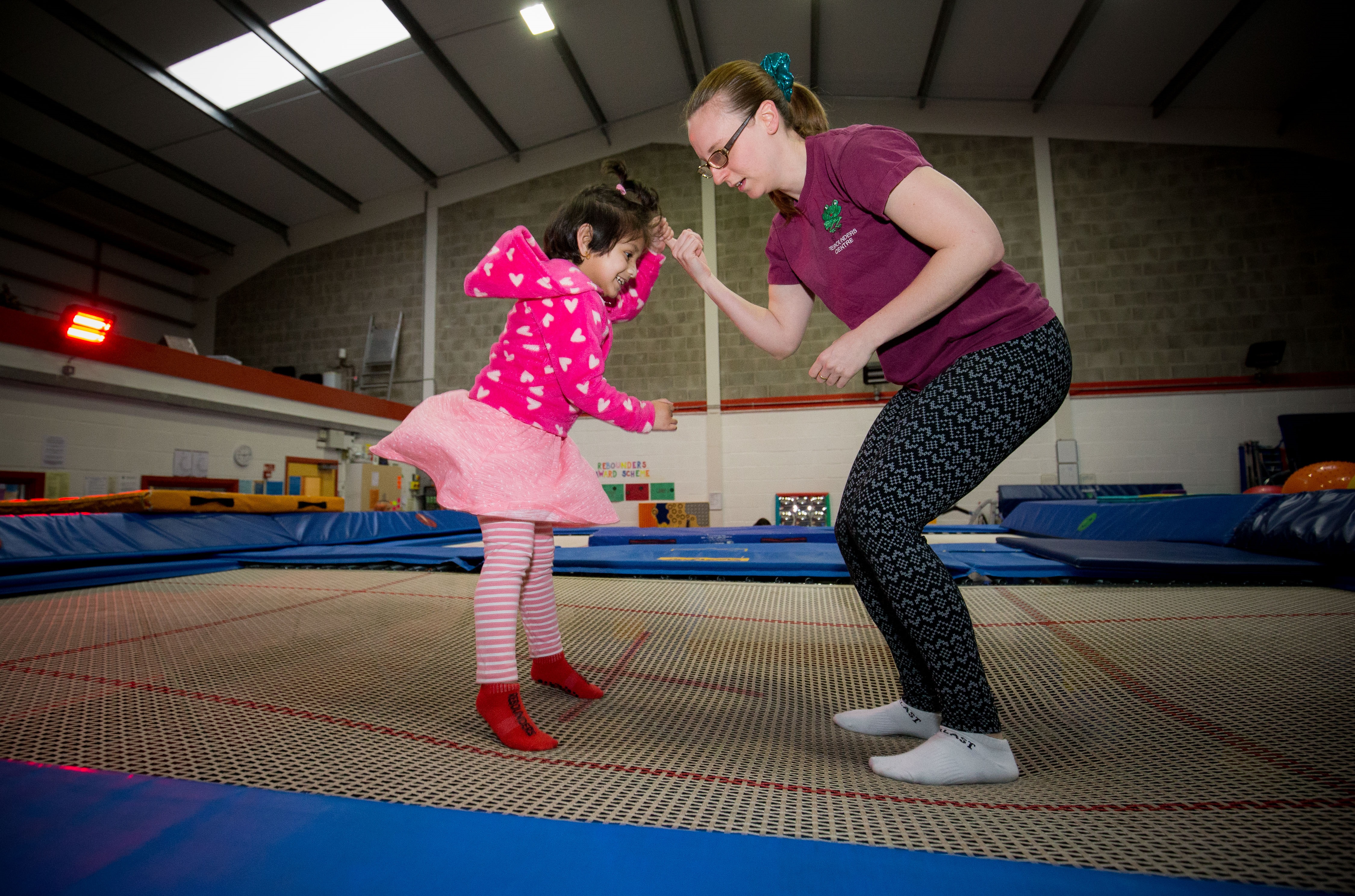 The difference Rebounders is making to the lives of people such as Isham – one of 200 members who range in age from 18 months to 84 years – is one of the reasons the charity has just been awarded £5,000 from the Aviva Community Fund. 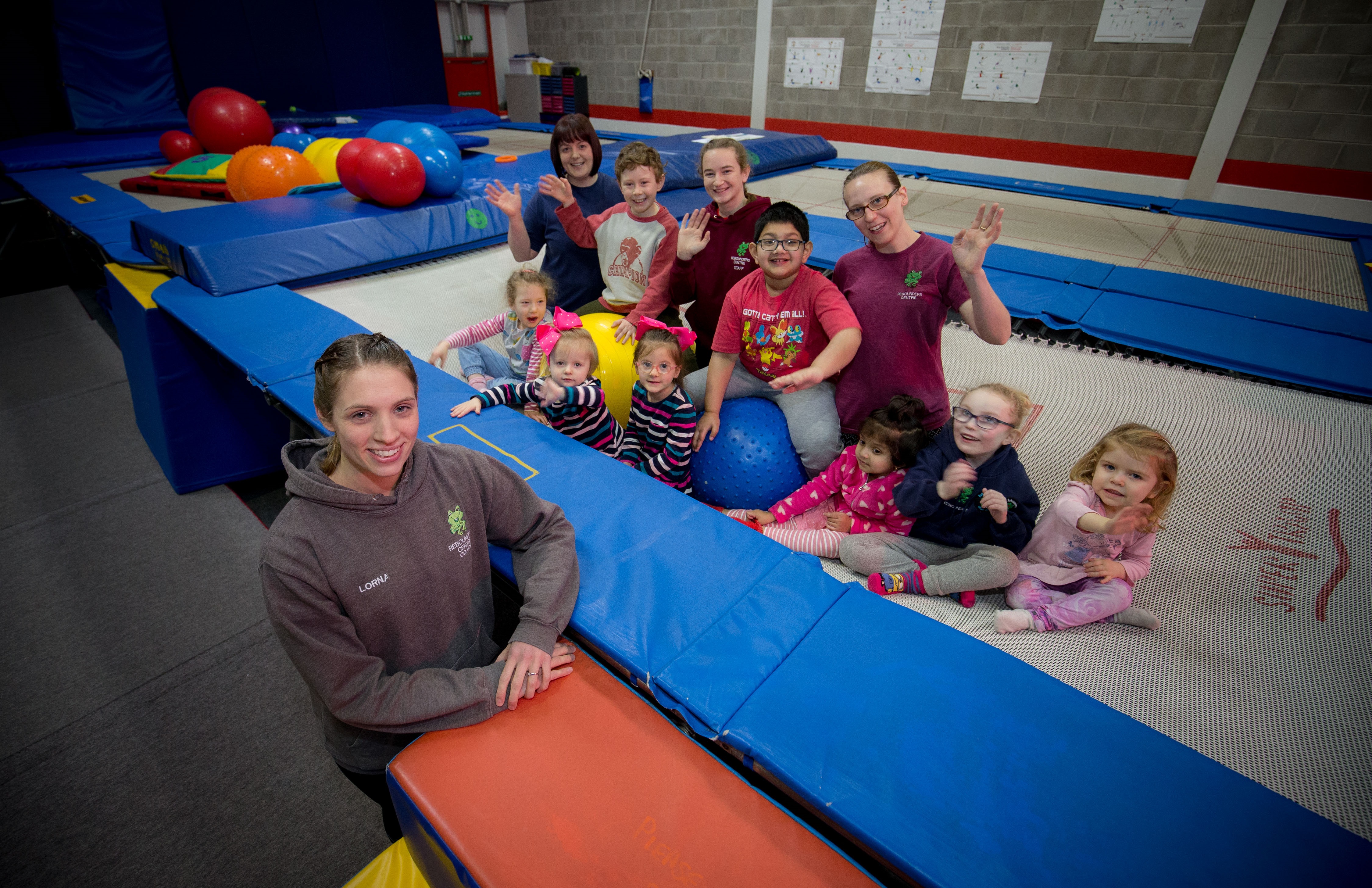 Lorna Fuller with the coaches and children of Rebounders

They discovered the news at the end of January and, says Lorna Fuller, centre supervisor at Rebounders, the whole team were over the moon with the news.

“The funding will make a huge difference,” says Lorna. Rebounders is a charity with funds coming from fees paid by participants and fundraising events such as sponsored bounces and even a forthcoming sky dive.

“We don’t have that kind of money just there in the bank to buy equipment,” she adds.

The Aviva Community Fund money will be spent on replacing worn and broken equipment and buying new therapeutic aids and equipment. 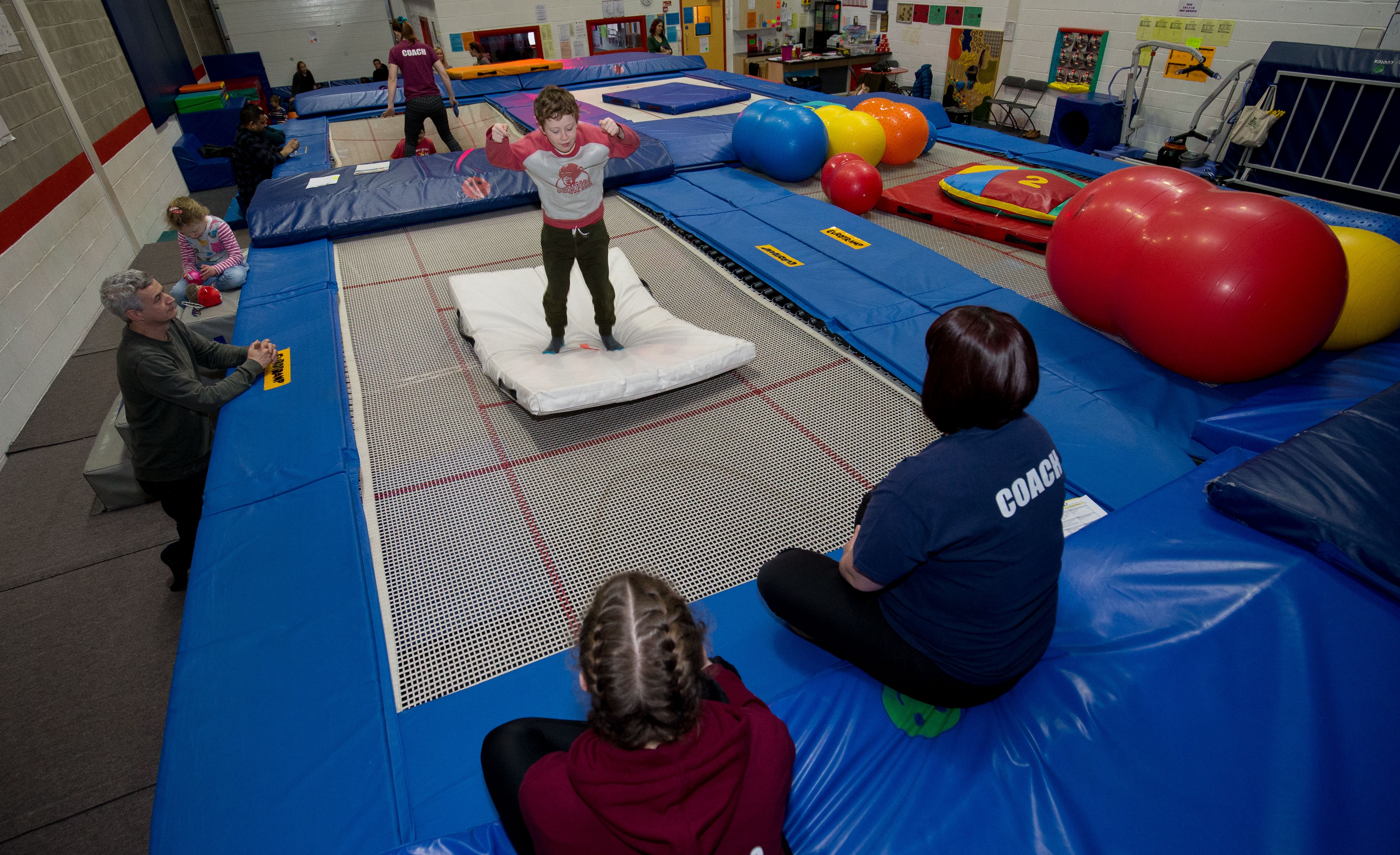 This equipment is vital in helping Rebounders offer its ‘rebound therapy’ for adults and children with disabilities. The specially-trained staff create fun and engaging classes tailor-made for each individual with the various exercises helping to improve their coordination, movement and communication skills in a fun and engaging way. And it has a massive impact on the lives of those who take part, benefitting everything from coordination and muscle tone to confidence, verbal skills and the ability to follow instructions.

Rebounders is one of 592 projects across the UK to receive money in the Aviva Community Fund 2017. Organisations across the country will receive funding ranging from up to £1,000 to £25,000 for projects benefitting health and wellbeing; skills for life; community support; and inclusivity.

Top priority at Rebounders is replacing the two sets of foam and plastic steps leading up to the trampolines which have become sunken and flat through constant use.

“The steps mean we are accessible for more people,” says Lorna. “Most of the children who come to Rebounders can get onto the trampolines by themselves – but a lot of the adults we work with have limited ability. We have a hoist but the steps mean many of them can access the trampolines more independently. Getting people to do more for themselves is so important.”

The funding will also be used to purchase sensory equipment and toys which can help participants in their therapy as well as coloured floor mats which can act as safety cues for people who are visually impaired. The staff at Rebounders also hope to replace some of the soft play equipment used by the children while they take it in turns to wait for their turn on the trampolines. Waiting and turn taking can be a difficult skill for children with developmental delays so the play area is an important part of the Rebounders set-up. 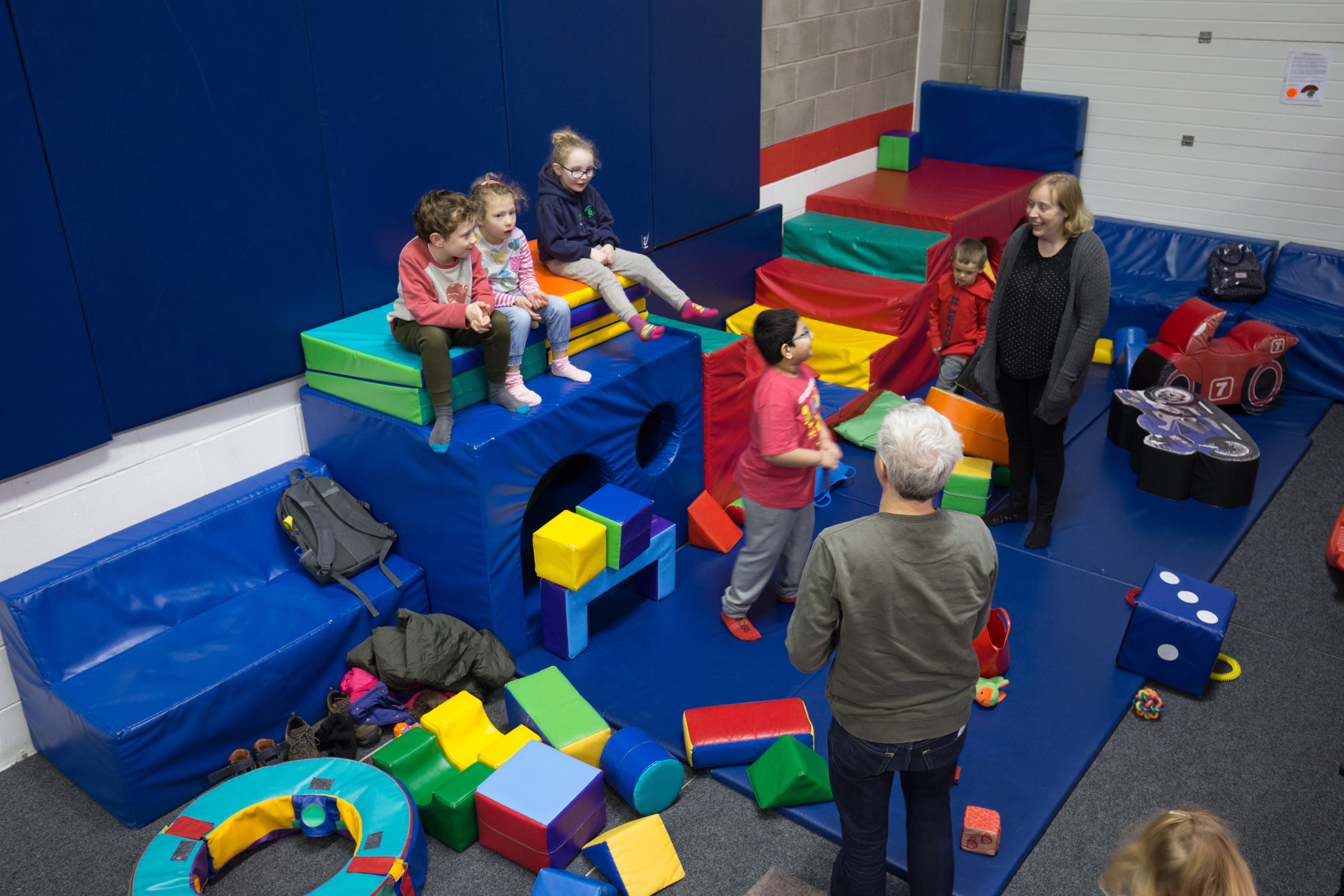 It is here I meet Martin Jennings and his two children Wilf, age 9, and Evie, age 6. Evie was born with a missing chromosome 22 – known as DiGeorge syndrome. She was born with a cleft palate which needed two operations and also has developmental delays. Wilf has dyspraxia which affects his coordination. 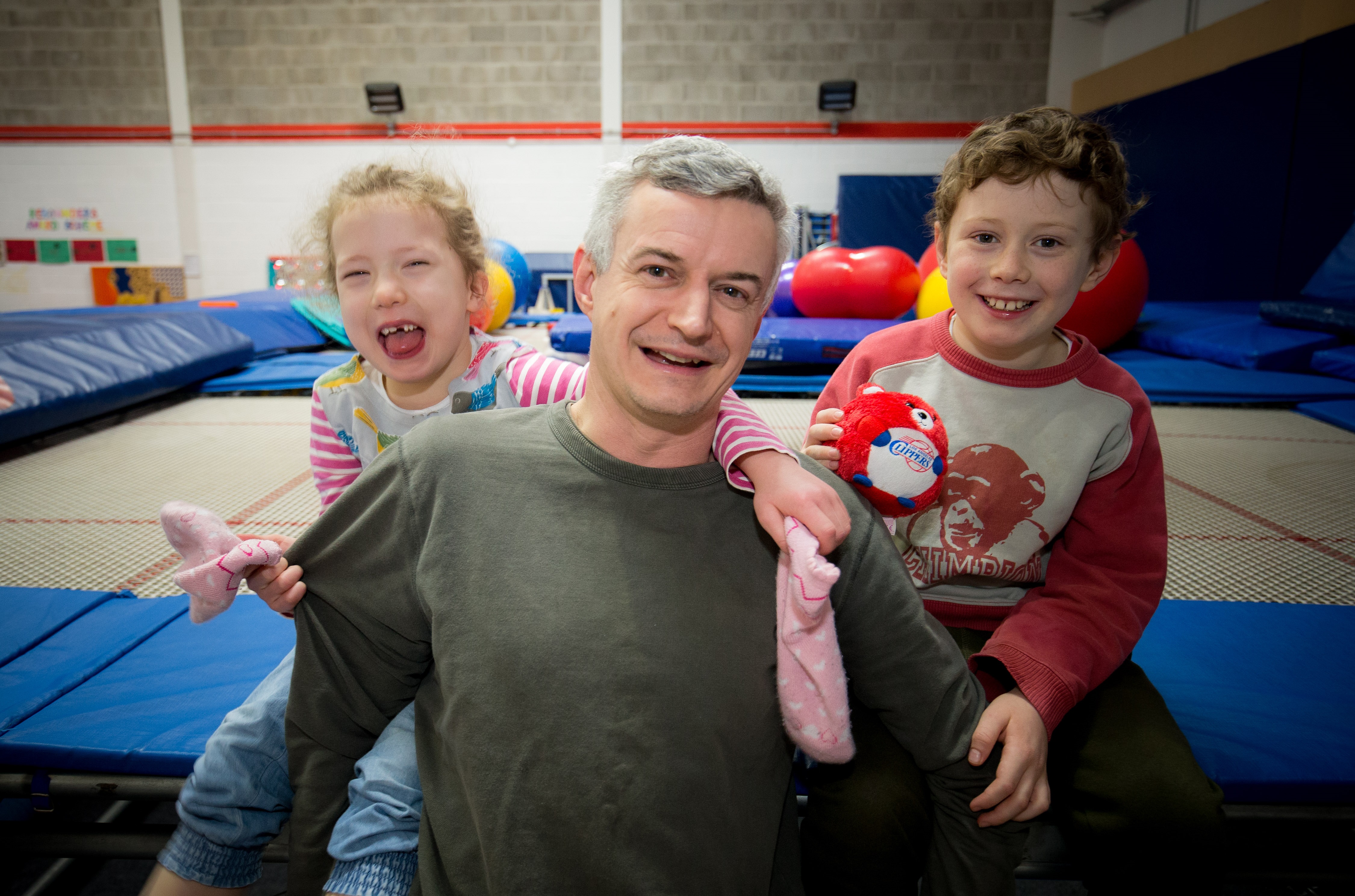 “Evie is hyper mobile and has poor muscle tone so it helps her core strength,” he says. “It has helped her confidence. It’s also an activity they can do together. They enjoy it and it’s fun. Evie loves it so much she even had her birthday party here.” 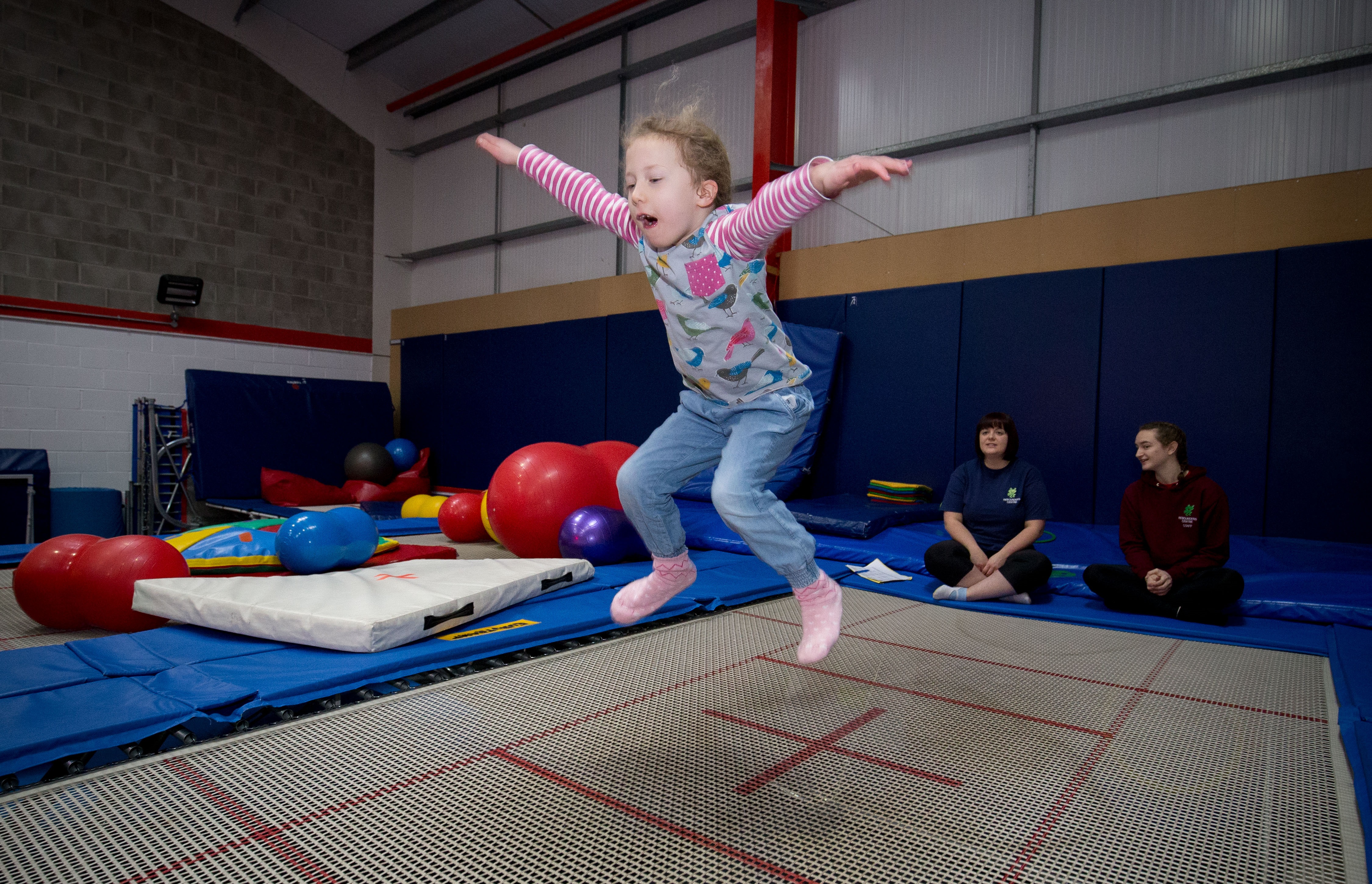 Evie Jennings age 6. Trampolining has helped her core strength and muscle tone as well as her confidence. 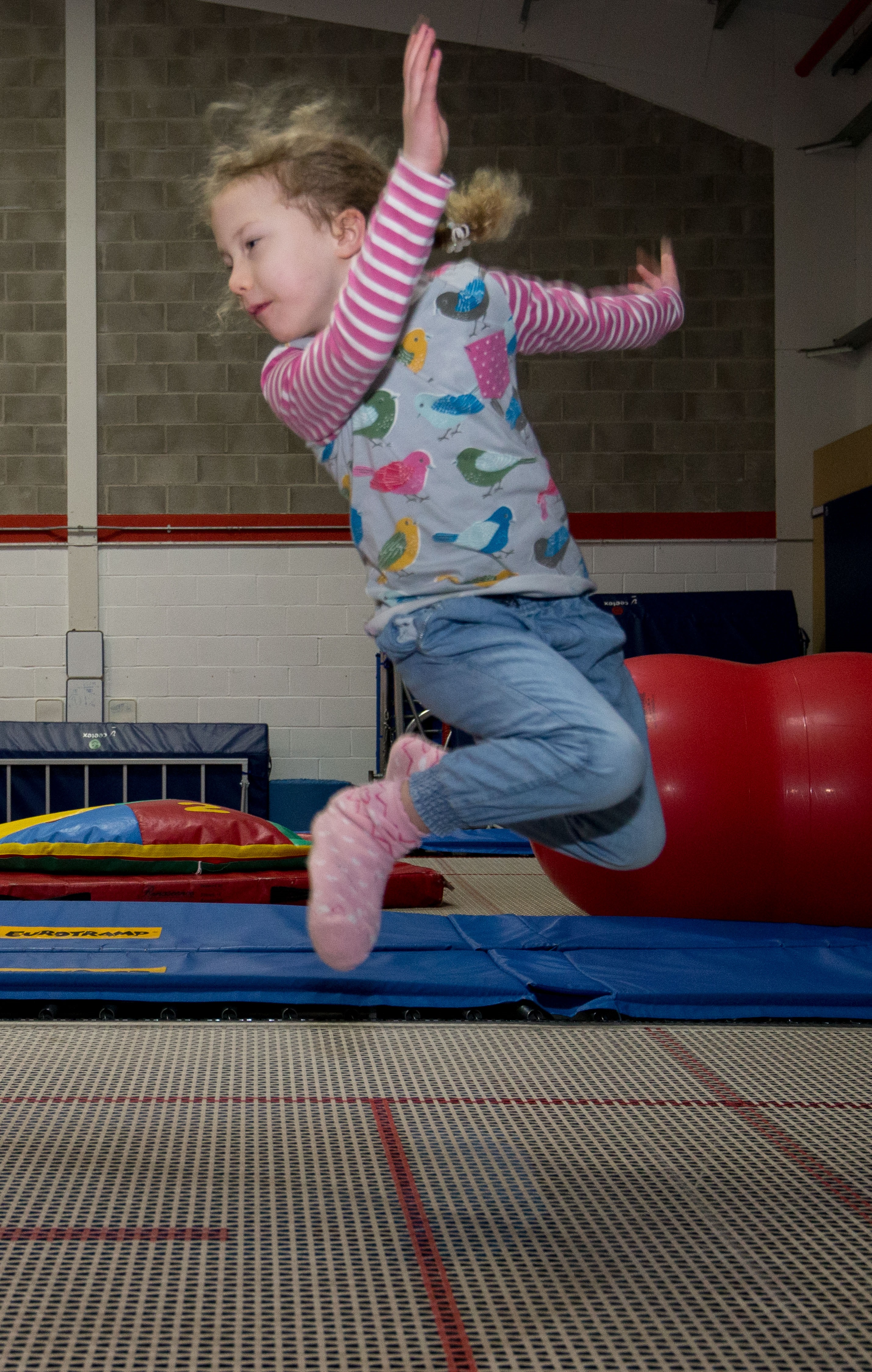 The enthusiasm and support from parents and carers for the work of Rebounders undoubtedly helped them gain the votes they needed to make it through to the judging stage of their Aviva Community Fund bid.

“There was a lot of support in all the classes and we rallied family and friends on social media,” says Lorna. “When we found out we had been successful the news travelled pretty fast. Even before we officially announced it people were calling me to say they’d heard and how fantastic it was.”

She adds, “For anyone thinking of applying for funding I would say firstly research exactly what it is you need. Be specific in your application. And talk about it. The more people you talk to about it the more likely it is they will vote.”

“We’re really pleased,” she continues. “The money will be so useful and we are really grateful to everyone who took the time to vote.”

Parent Sarah Dafydd says the funding is great news for children such as her daughter, seven-year-old Lois who really benefit from coming to Rebounders. 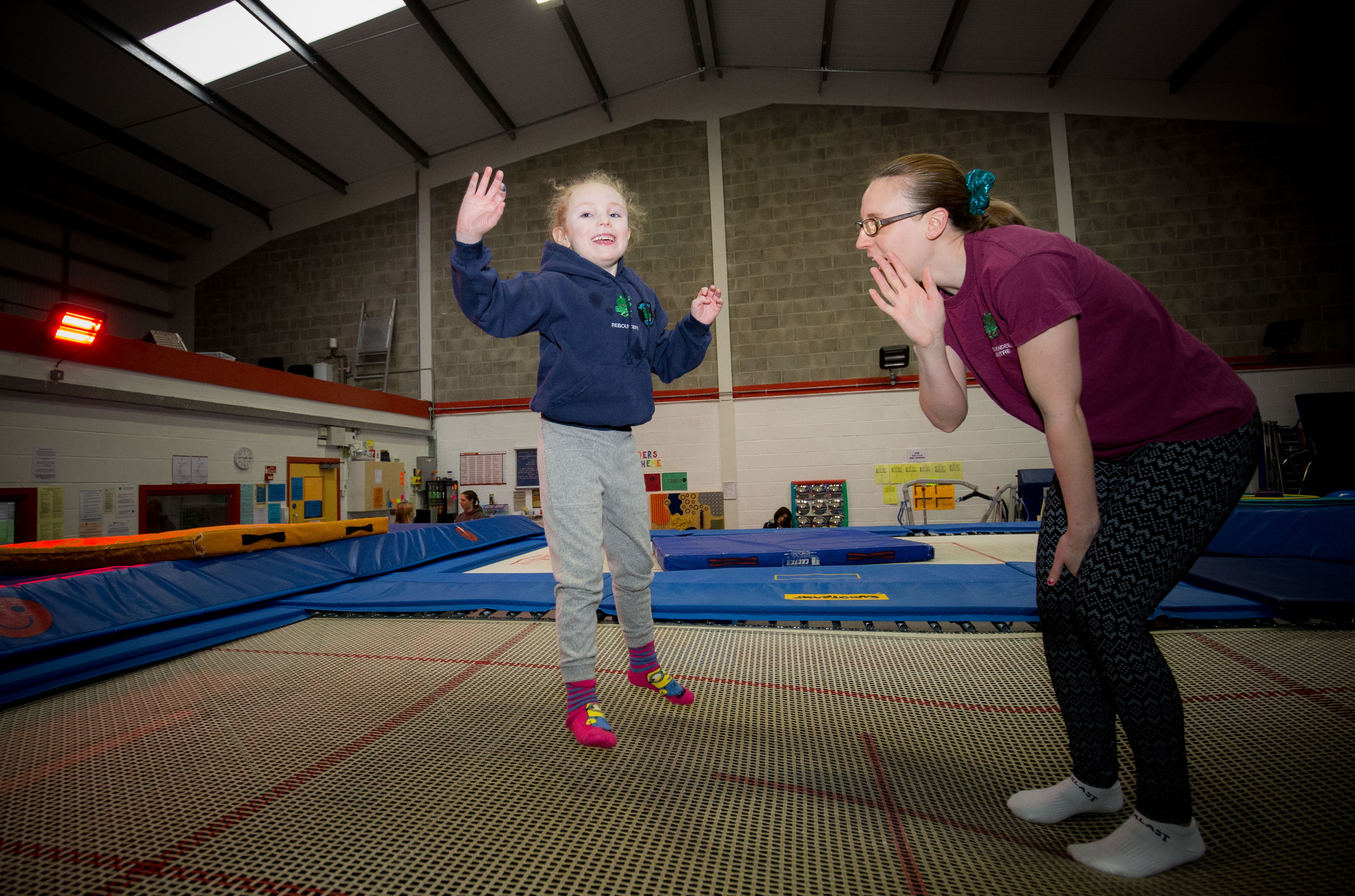 Lois has global developmental delay as well as traits of both ADHD and autism.

Lois proudly tells me about the badges sewn onto her Rebounders hoodie which she gained for jumping and listening.

You’d never think it looking at her today but nine months ago Lois couldn’t jump. As she bounces around on the trampoline she squeals with laughter and waves her arms in the air.

“Her first lesson here they taught her to jump – and she’s kept on jumping ever since,” says Sarah. She explains that jumping helps Lois to manage some of her symptoms because it provides a sensory release when she gets overwhelmed. 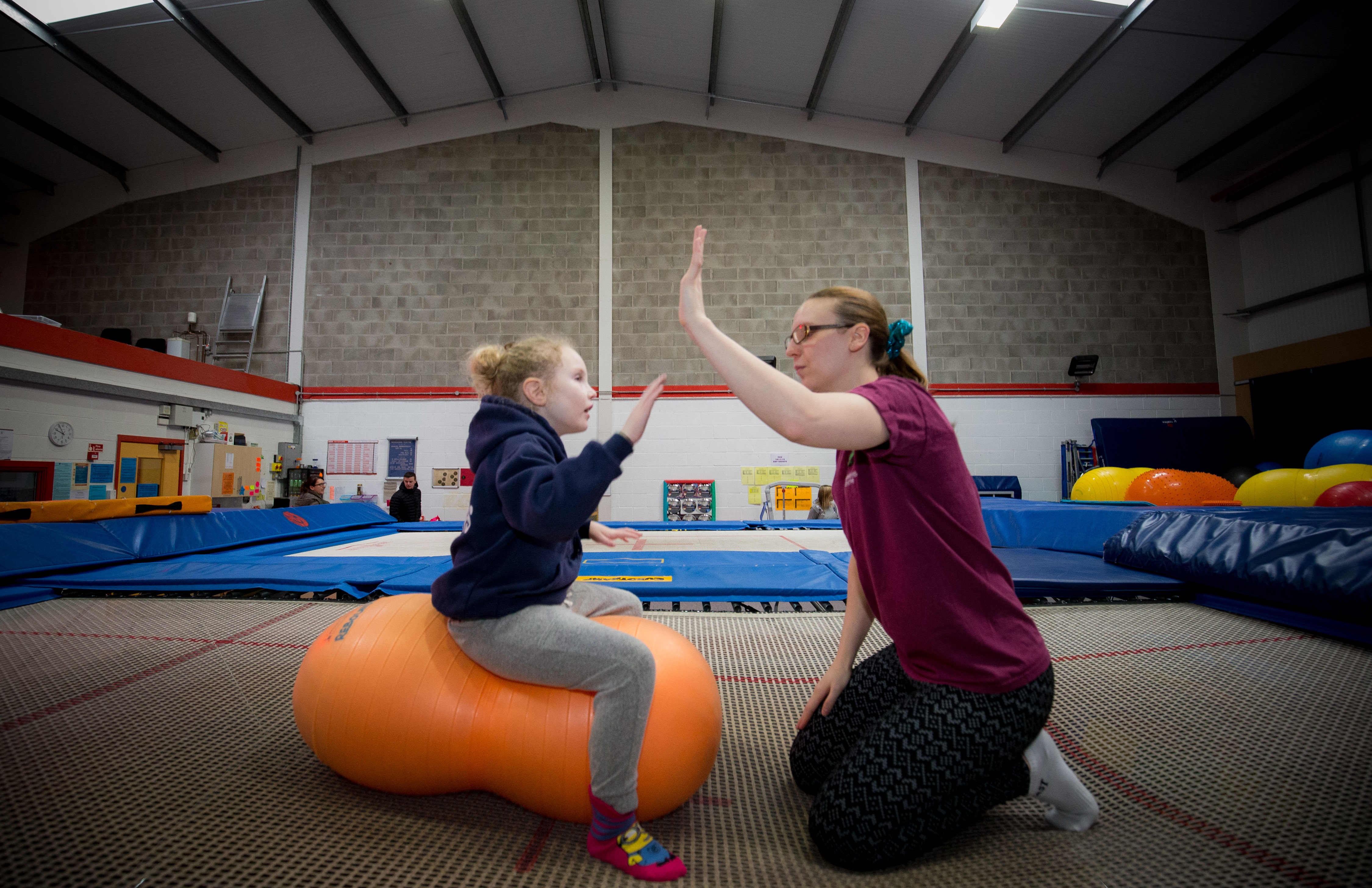 Lois sits on the ‘peanut’ 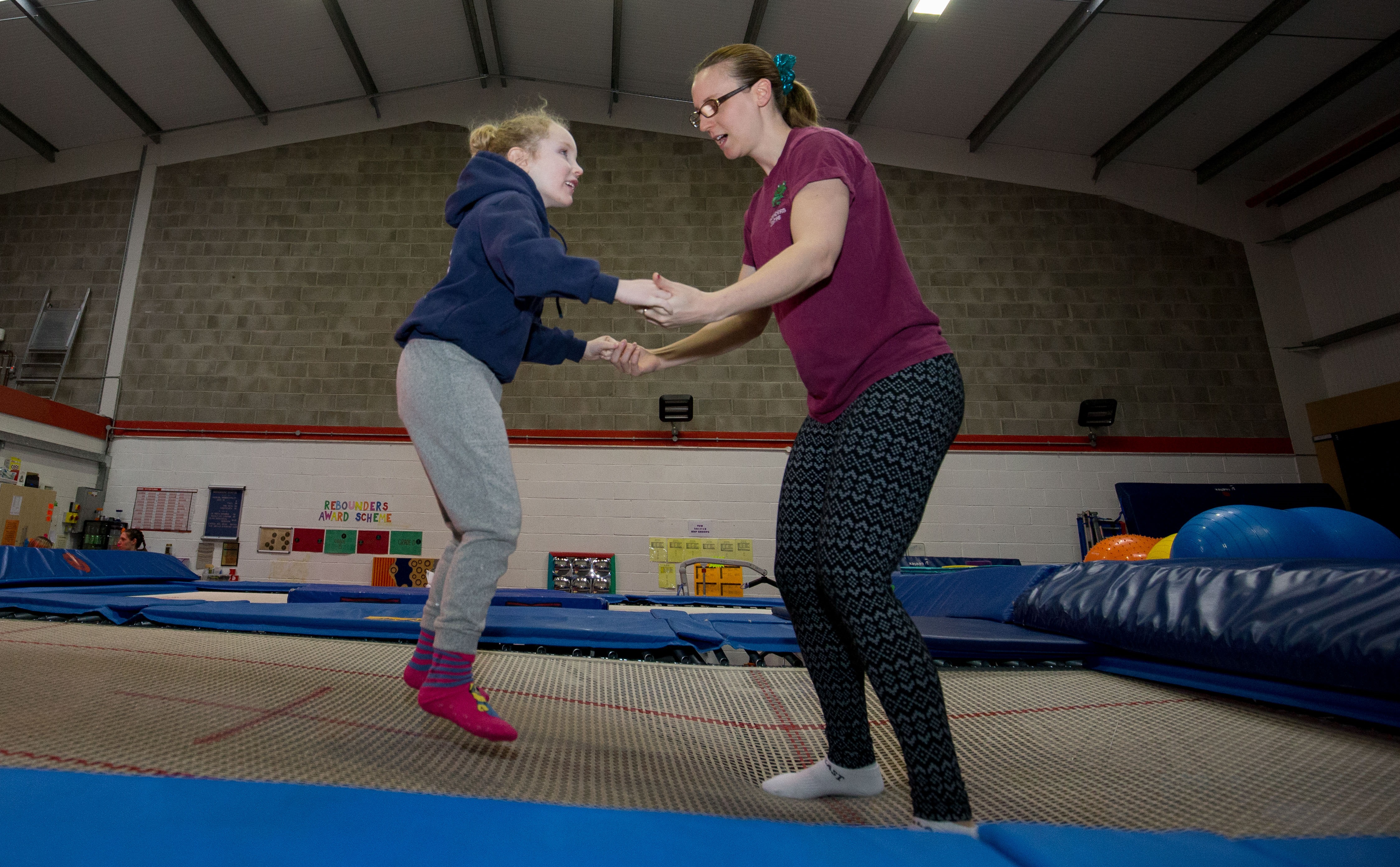 Sarah has noticed a massive difference in Lois’s confidence and ability to follow instructions. It’s also helped to improve her muscle tone and coordination. Rolling backwards and forwards on her belly on the ‘peanut’ – an inflatable plastic ball shaped like a peanut – also helps with issues such as constipation, which is common among people with global developmental delay.

“She goes to so many medical appointments where they are prodding and poking her. This” she says pointing around the room, “is fun for her.”

“I know it’s the best therapy she can get – but for her it’s simply fun.” 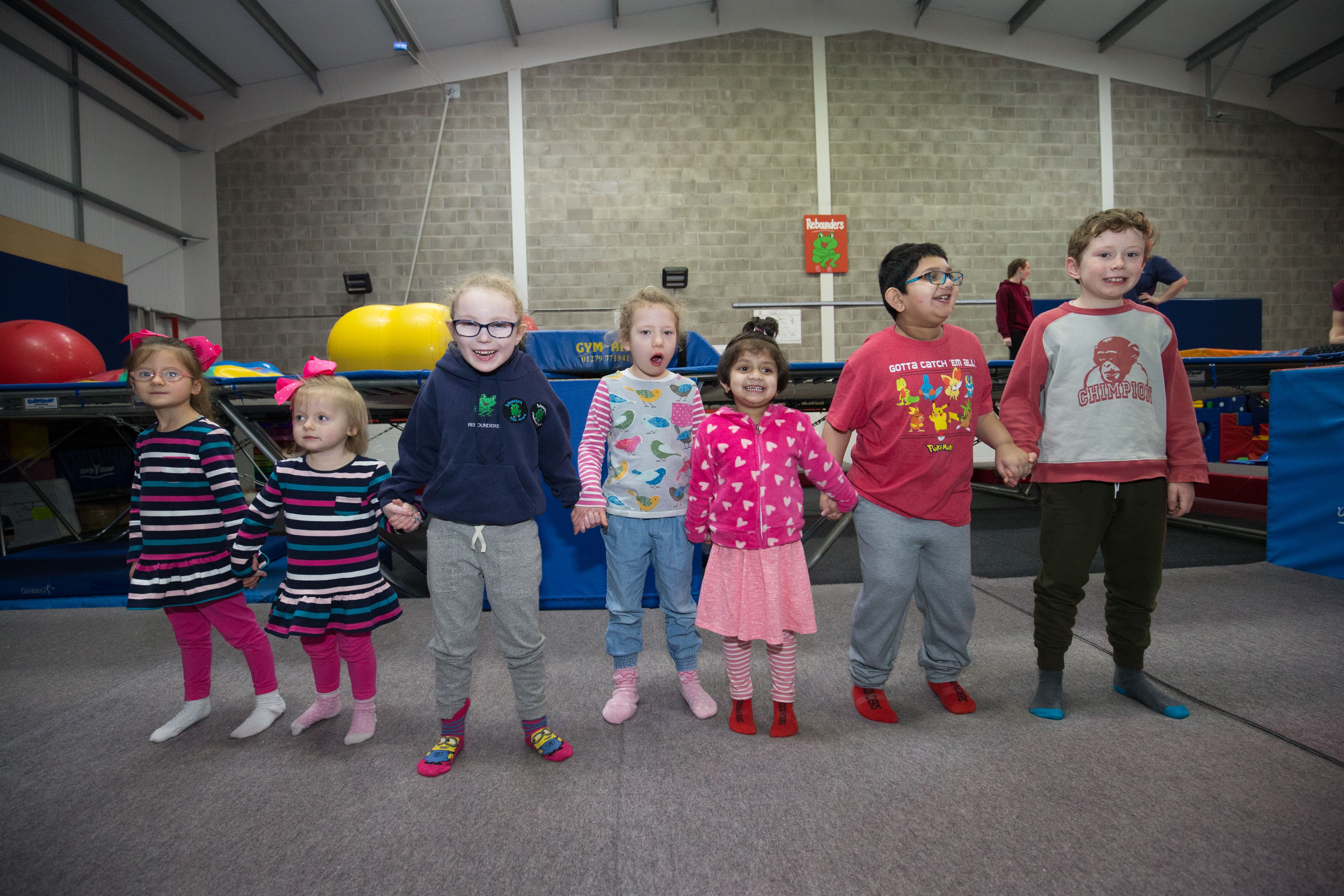 For more information on Rebounders visit their Facebook page.

You can find out more about the Aviva Community Find here – including a full list of this year’s winners and details on how to register to be the first to hear details of next year’s funding applications.

Read about my visit to Ysgol Gynradd Gymraeg Pont Siôn Norton Primary School in Pontypridd– previous winners of a grant from the Aviva Community Fund.