With the heatwave continuing, I took my youngest child to Victoria Park splashpad in Cardiff to cool off.

We’d arranged to meet a few friends – three other mums of three with just our youngests not at school and all determined to make the most of these last few weeks of preschool life before older siblings are home for the summer holidays and before our little ones start reception in September.

Located in the Canton area of Cardiff, Victoria Park is one of my children’s favourites (you can see our full list of top local playgrounds here) and in summer months the splashpad just makes a visit even better.

It’s a really well-kept Grade 2 listed Victorian park with beautiful flower beds and good paths for scootering on. It was built in 1897/8 to celebrate Queen Victoria’s Diamond Jubilee, and retains much of its period charm with a cast iron bandstand based on the park’s original; a restored cast iron fountain… and a statue of Billy the Seal, the park’s most famous resident. Billy was thought to have been accidentally fished out of the Irish Sea and donated to the park’s small zoo in 1912. Billy died in 1939 – when an autopsy discovered Billy was in fact female. Billy’s skeleton is currently on display at the National Museum Cardiff. 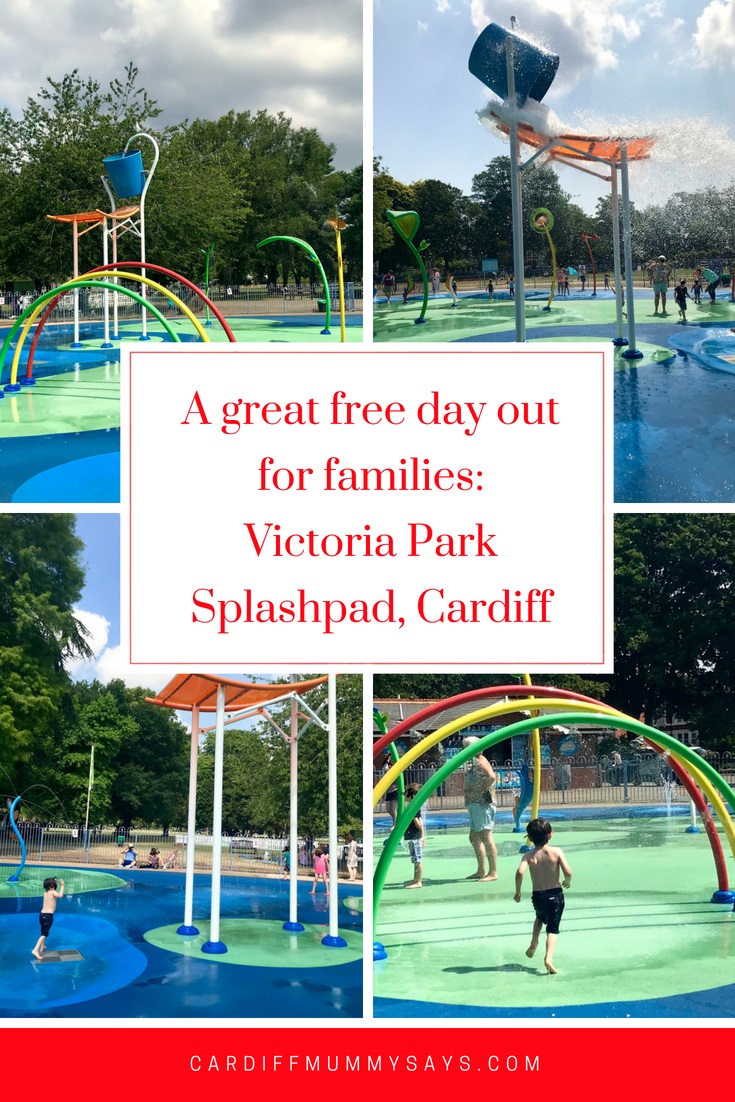 The playgrounds and surrounding area

There are two decent sized playground areas for older and younger children with a good selection of equipment including swings and climbing frames. My children especially love the zip wire. You can read in more detail about the playground here.

Free on-street parking is available on the surrounding streets although on busier days you might have to park a few minutes away. Toilet and baby changing facilities are available plus there’s a refreshment kiosk and café.

The park is also right next to La Creperie de Claudie on Cowbridge Road East, famous locally for its indulgent chocolate-filled pancakes; as well as Pettigrew Bakeries which serves artisan bread and baked products. 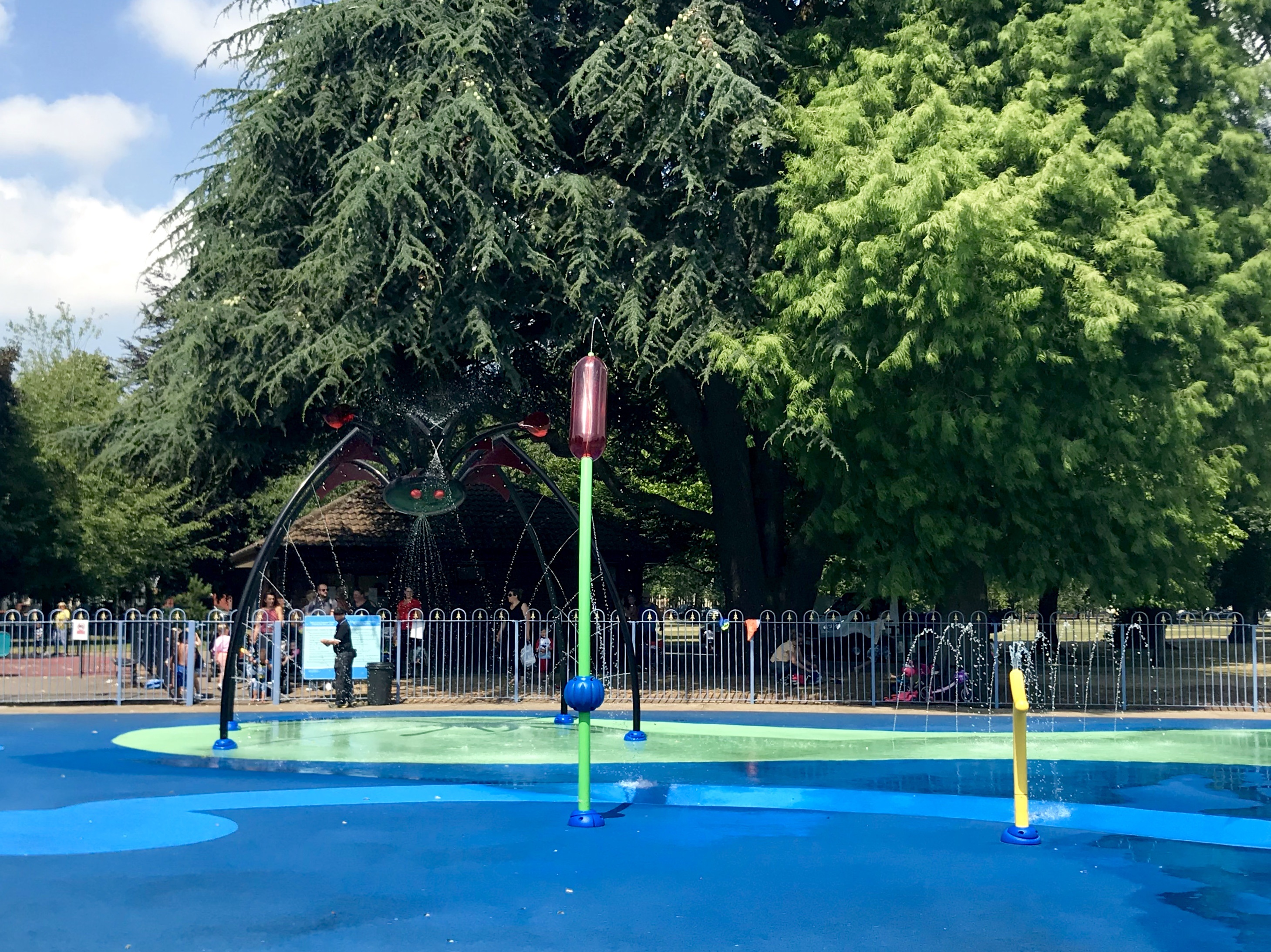 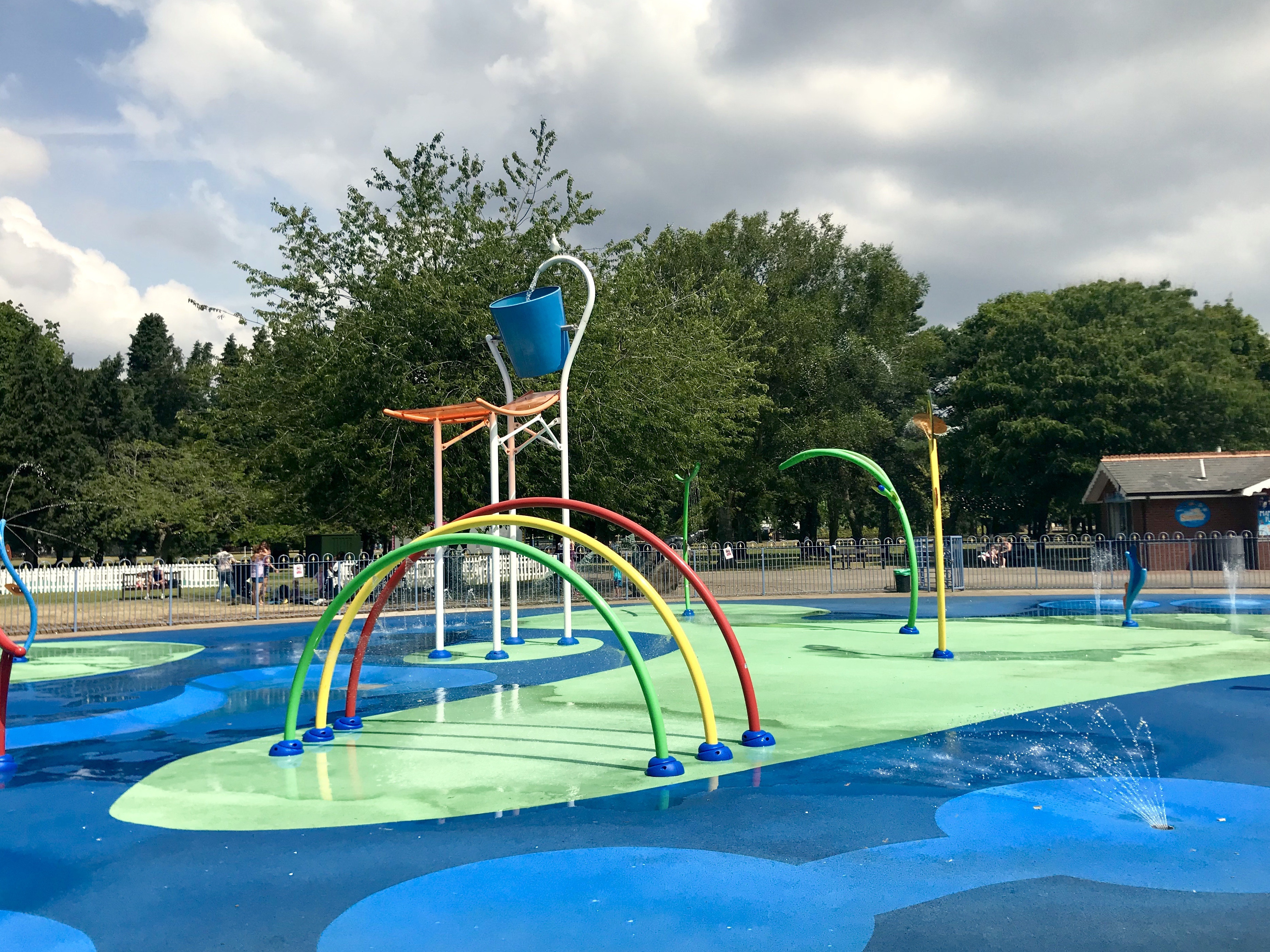 But at this time of year, the Victoria Park splashpad is the main appeal.

It opened two years ago at cost of £485,000, replacing the old paddling pool which was in need of repair and had become a hazard because it didn’t meet modern safety standards.

As you can imagine, it’s incredibly popular with families in Cardiff and beyond. In fact in its first season alone it attracted 71,000 visitors (an average of 6000 people a week) during its opening season).

On sunny days at weekends and in the school holidays it gets really busy. So the chance to visit when the big kids are at school is always a delight.

Victoria Park splashpad has 33 water features and is supposed to be split into three zones for toddlers, juniors and families – although I’ve never quite been sure which bit is which. Most of the children seem to run around the whole site regardless.

The splashpad is open term time weekdays from 12pm. Which isn’t great when your child goes to afternoon preschool as is the case for us. But still, we managed a good half hour in the water (plus half hour on the playground) before having to head back for school.

What my four year old thought 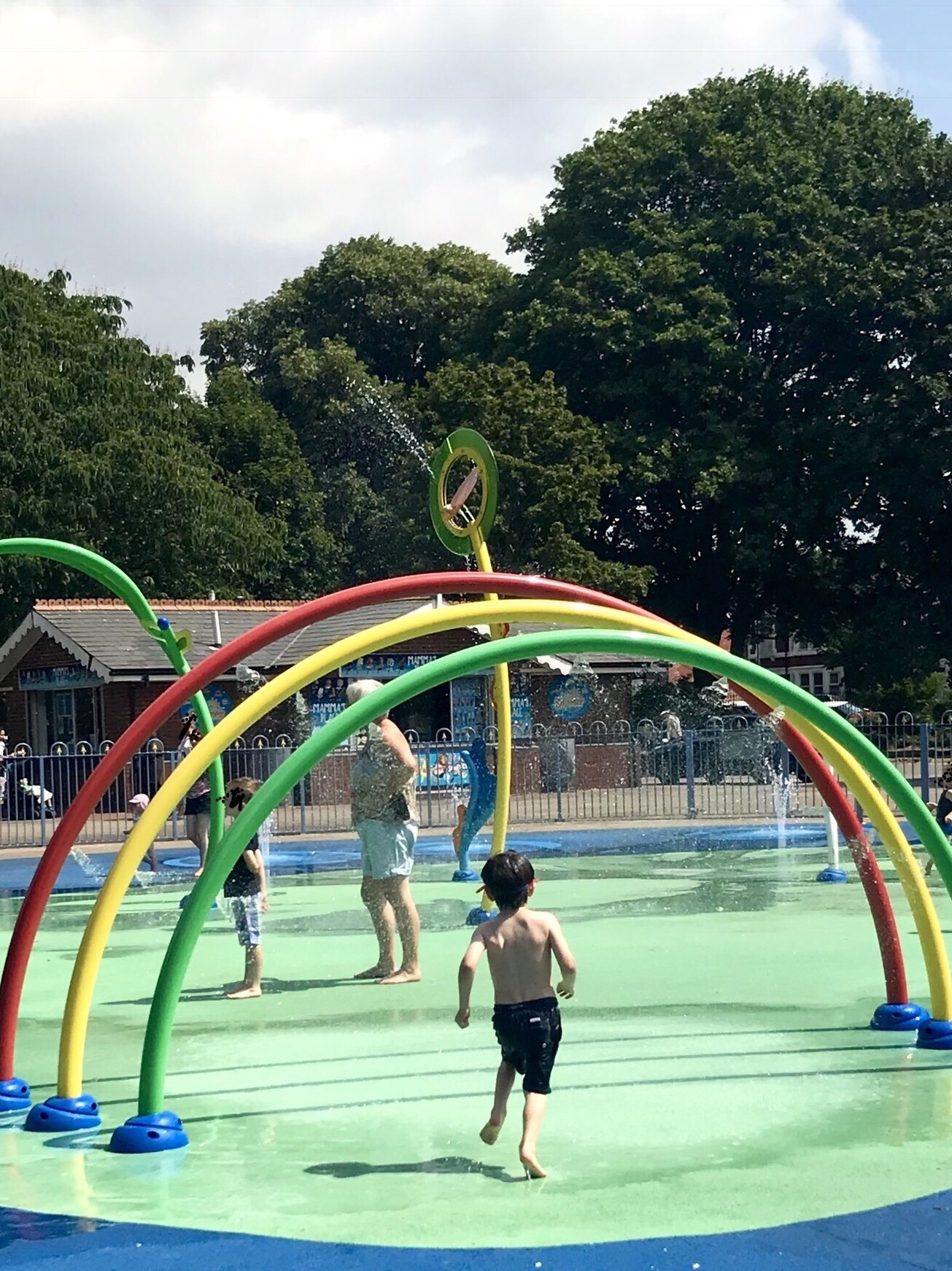 The moment the gates were open, Littlest and his friends wasted no time running around the water features. There are various water sprays and squirters, plus my four-year-old’s favourite, a bucket which fills up with water and then tips out when it is full, drenching those underneath. He absolutely loves this feature and spent ages stood underneath waiting for it to empty. He also loved the multi-coloured archway which squirts water from either side. 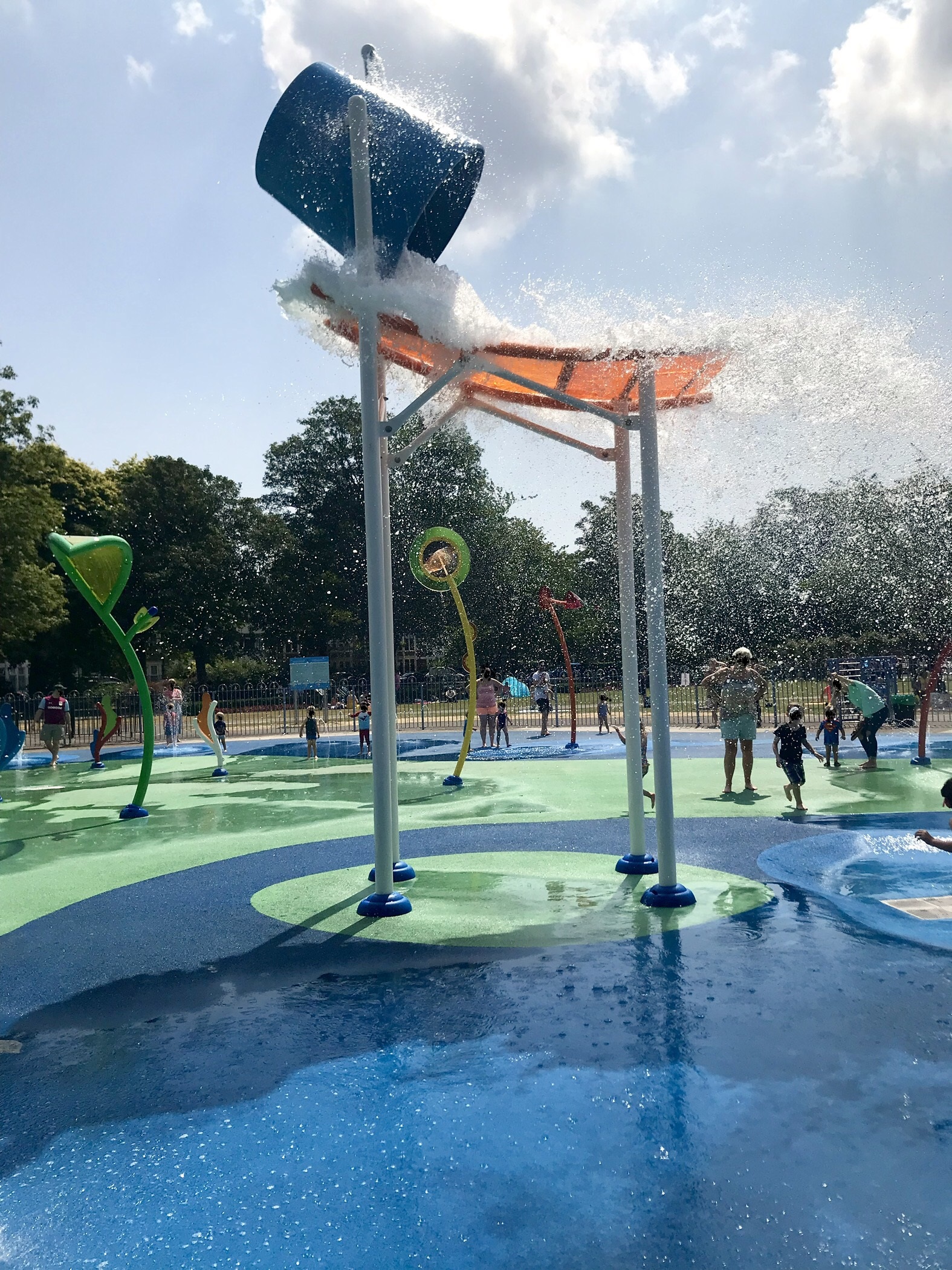 With 30-40 children running around the splashpad it wasn’t easy to take too many photos. But hopefully this has given you a flavour of what to expect. 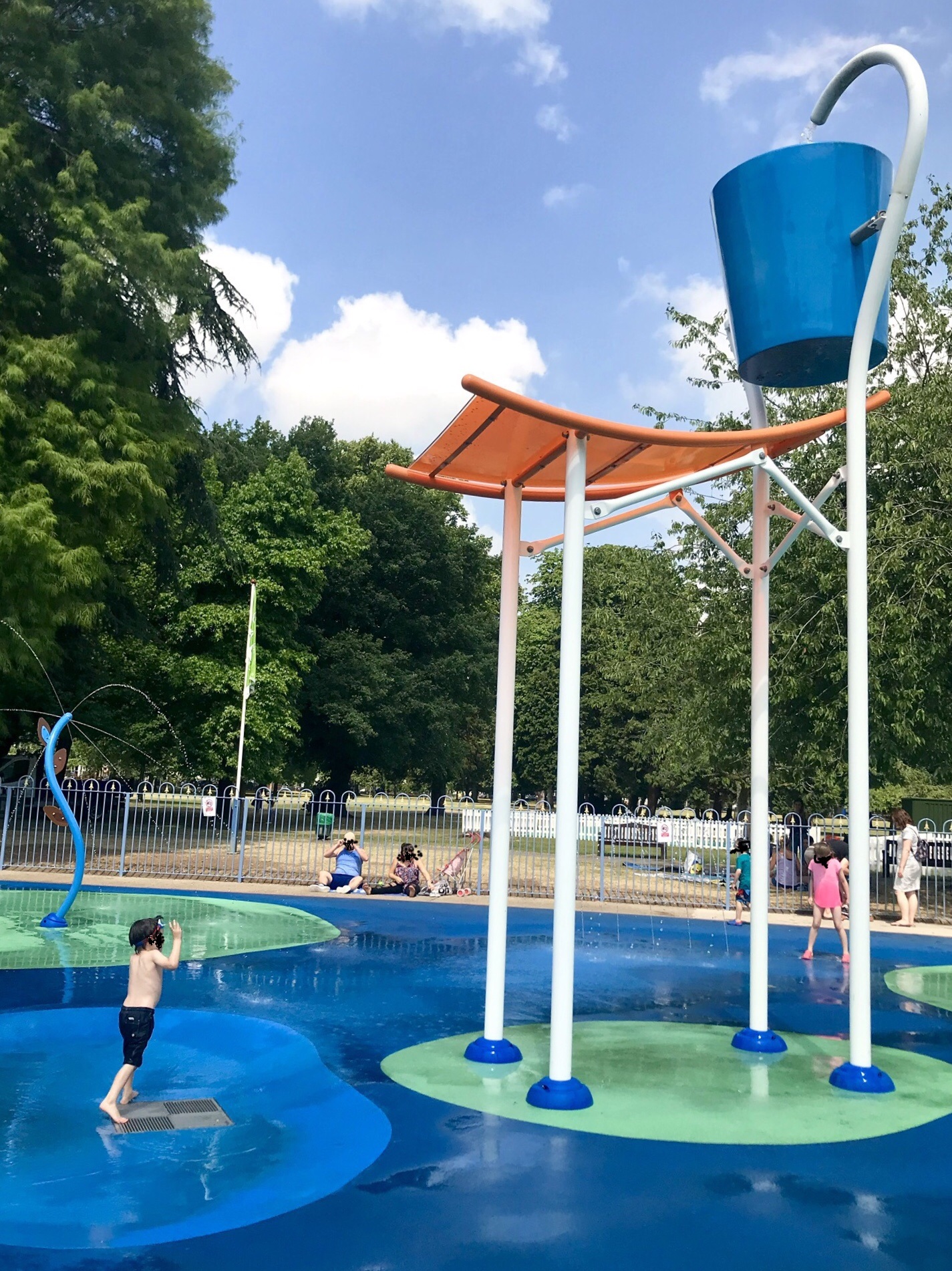 If you have pre-schoolers, make the most of the next week or so and visit while the big kids are still at school.

If you have older children, don’t just leave it for the sunny days when it will be jam-packed. If your child has a beach wet suit, put it on them and enjoy having the place to yourself!

Victoria Park Splashpad is free to visit open at weekends and week days during school holidays from 10am-7pm and week days term time from 12pm-7pm.

Victoria Park itself is open daily from 7.30am until 30 minutes before sunset.

Have you been to Victoria Park splash pad in Cardiff? I’d love to know what you think in the comments below, on the Cardiff Mummy Says Facebook page or you can tweet me on @cardiffmummy

For more ideas of local family-friendly days out, see the Cardiff section of Cardiff Mummy Says or follow our adventures on Instagram.