Like a lot of families, our May half term was not what we’d planned. At the end of last year we’d booked a trip to Paris, making the most of two Inset days tacked onto half term to give us a 10-day break. Our week would have comprised of a cheap and cheerful camping holiday on the edge of Paris and a three-day, two-night trip to Disneyland Paris, including lunch with Disney characters on mine and Cardiff Daddy’s 13th wedding anniversary.

We have been to Paris, however, 12 years ago with Cardiff Daddy’s family, and had told the children all about climbing the steps to the top of the Eiffel Tower and eating chocolate-filled crepes at the bottom, listening to buskers, and dining on a restaurant boat sailing down down the Seine. We were so looking forward to revisiting this wonderful city with our children and absorbing its wonderful culture.

But, then, as we all now, along came Coronavirus, and it wasn’t meant to be.

In the grand scheme of things, a missed holiday is nothing. We’re all very grateful to be happy and healthy. In fairness to my children they’ve handled the Covid-19 situation with an amazing level of understanding and maturity and they took the news of the cancelled holiday in their stride.

But Cardiff Daddy and I didn’t want the week to go by unmarked, so we planned a few little things to brighten up our half term. We’re not one of those families to go to town painting incredible Disney images all over our walls or creating a giant Eiffel tower in our living room. Cardiff Daddy also could no longer take any time off work and I was juggling my work commitments throughout the week too. But we did plan a few surprises to brighten up our half term.

We had a French-inspired breakfast of chocolate-filled crepes

On the Saturday morning when we should have departed, the children came downstairs to discover our dining table laid out ready for a breakfast of crepes, with chocolate and other treats to fill them with. We’d raided our stash of plastic plates and cups for red, white and blue to represent the colours of the French flag, and had also written a quiz about France for the children to complete. Questions included researching how to say the days of the week in French, the population of Paris, five things tourists might visit while in Paris, asking them to colour in a French flag, and finding five family films set in France. Which lead us handily on to our next surprise…

We bought an annual subscription to Disney+…

We were lucky to get a full refund on pretty much all elements of our holiday (we’re still haggling over the ferry crossing), and so we thought we’d treat us to an annual subscription to Disney+. Disney’s on-demand streaming service is packed full of Disney films, series, documentaries and more, priced at £59.99 for the year or £5.99 per month, with a week’s free trial available to new customers. We’ve definitely got our money’s worth already over the last week alone. It’s brilliant! 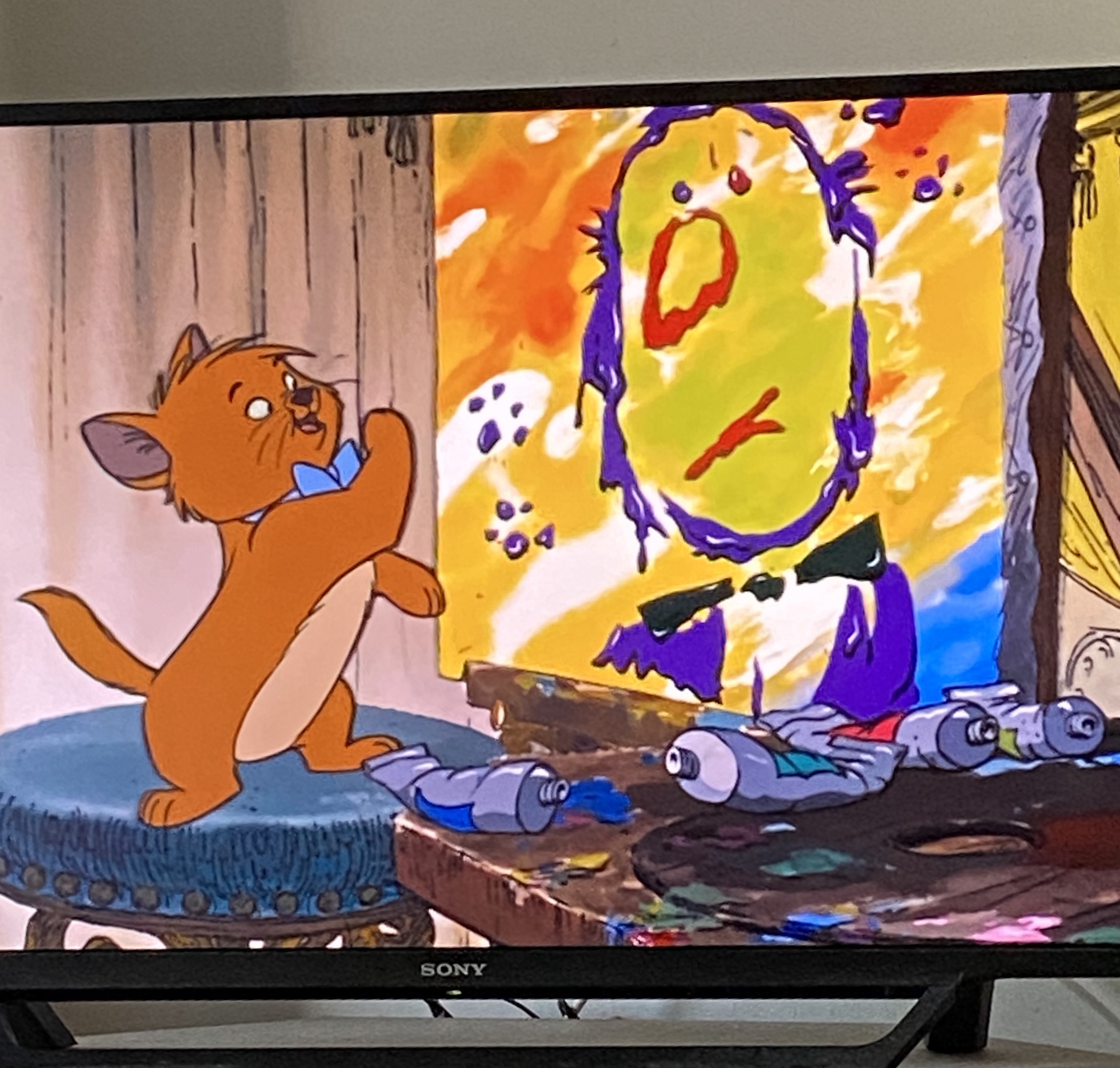 Inspired by the list they’d created as part of the quiz, and with access to a host of Disney movies thanks to our subscription to Disney+, we made family movie night a daily occurrence. Ratatouille was my children’s first choice. They’d never watched it before but they loved the tale of Remy, the Parisian rat who longs to become a chef. The film features plenty of Paris, including the bridges over the Seine and the Eiffel Tower. We’ve also watched AristoCats. Made in 1970 (“It’s older than you, Mummy and Daddy!” the film is about an wealthy old lady living in Paris who wants to update her will to leave all her possessions to her cats, and the butler who kidnaps her precious felines so that he can get his hands on the money. And, of course, we couldn’t leave out Beauty and the Beast, based on the fairy tale written by French novelist Gabrielle-Suzanne Barbot de Villeneuve and published in 1740; and The Hunchback of Notre Dame, set in Paris’s iconic cathedral, parts of which burned down in April 2019, which we’re planning on watching tomorrow, on what would have been the day we’d be journeying home from France.

We made a French musical playlist

From iconic numbers such as Edith Piaf’s Non, Je Ne Regrette Rien and Charles Trenet’s La Mer, to children’s songs Alouette, Gentille Aloutte and Frere Jacques, and songs I remember from years ago such as Vanessa Paradis Joe Le Taxi and Sash’s Encore Un Fois, I scoured Spotify to create a playlist to conjure up the sounds of France across the years and to hopefully add to my children’s cultural education and teach them a few more words of French.

Barbecues always help conjure up that holiday feeling and we had a few throughout the week. My favourite was on the day of our anniversary, where the kids drank fruit juice in wine glasses, and after our burgers and hot dogs, we stuffed bananas full of chocolate, wrapped them in foil and barbecued them until they became a delicious gooey mess. After eating, we turned on the music for a disco, starting with the French playlist, moving on to a soundtrack of Disney hits, and then, somehow, ending up with a medley of 90s BritPop. My favourite question from the kids was while listening to Pulp’s Disco 2000, “Why is that band singing about meeting up in the year 2000 when it’s in the past?” and we felt extremely old telling them that when we were teenagers and the song was first released 2000 was in the future.

Our next door neighbours also had a barbecue in their garden at the same time, joining in the dancing too. I think this evening will go down as one of my top lockdown memories.

We spent a lot of time in the paddling pool 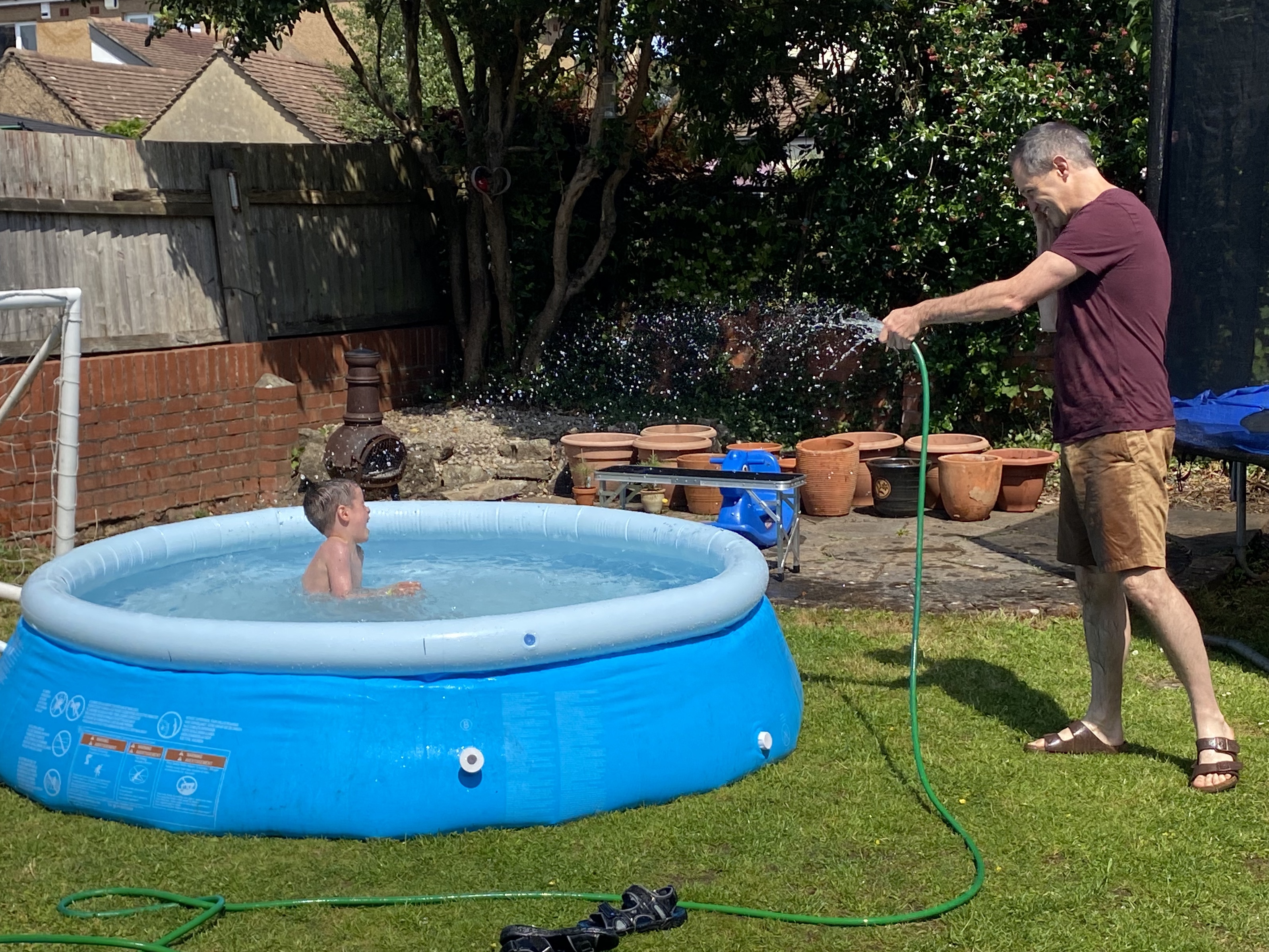 Not quite the swimming pool you’d expect on holiday, but we have been so grateful for our paddling pool these last couple of months with the weather being so amazing. The children have had hours of fun jumping in and out, shooting down the plastic slid into the pool, having water fights and so on, cooling down. This was taken on our wedding anniversary… and shortly afterwards Cardiff Daddy was pushed into the pool fully clothed. Luckily I escaped!

We had a mocktail party 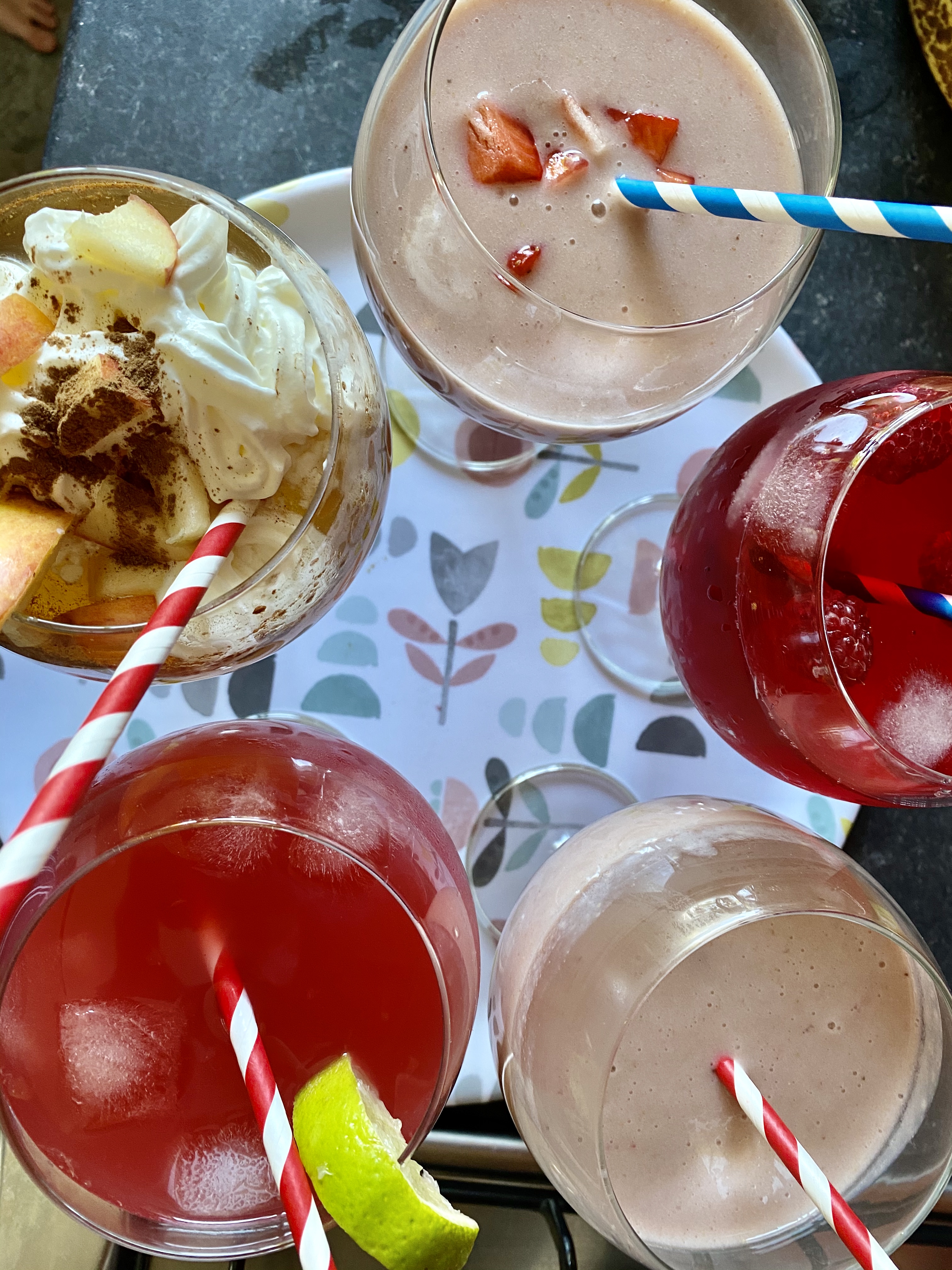 My daughter moved from Brownies to Guides in January, and to the credit of her amazing leaders, the meetings have continued digitally during lockdown. As well as making her promise online, she’s also been working towards various badges, and during the week we should have been on holiday, completed the requirements of her Mixology badge (yes, Guides has certainly changed since my day!). After a taste testing session of pairing different flavours, she settled on four different cocktail options, wrote her own menu and, with a little help, made us these beauties which we sipped in the garden in the afternoon sunshine.

We camped in the garden 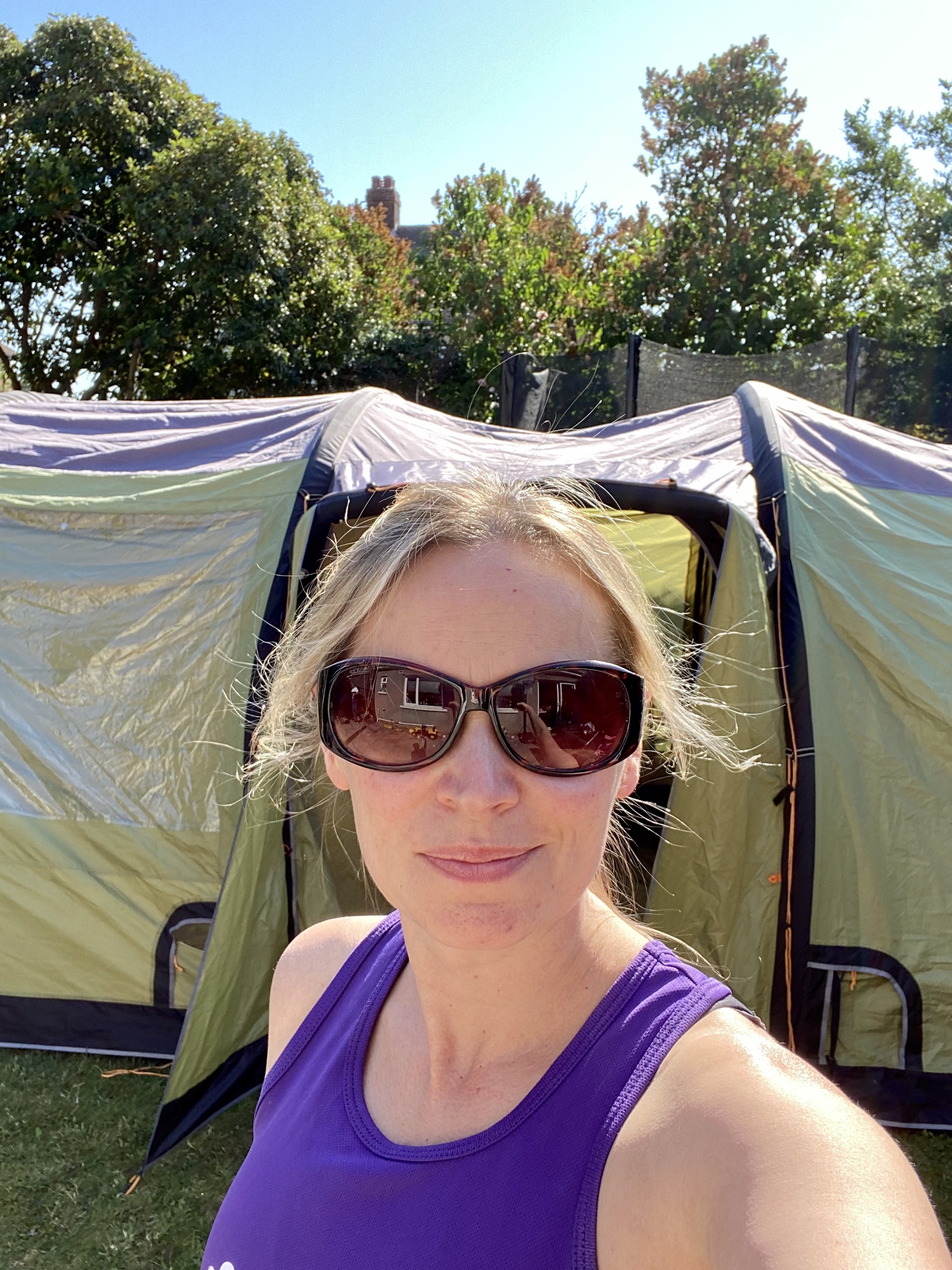 We pitched up our tent in the garden for a two night staycation – our second camping trip of lockdown, with the first being over Easter. None of the usual packing restrictions meant instead of just sleeping bags and campbeds the kids filled the sleeping areas with duvets, blankets, cuddle toys and more. It looked so comfy and welcoming. Our next door neighbours and neighbours over the fence also camped on the same evenings, which made it feel like more of an adventure. We made sure to have our meals outside, even putting up our camping table and benches for the full experience. The fresh air and slight change of scene 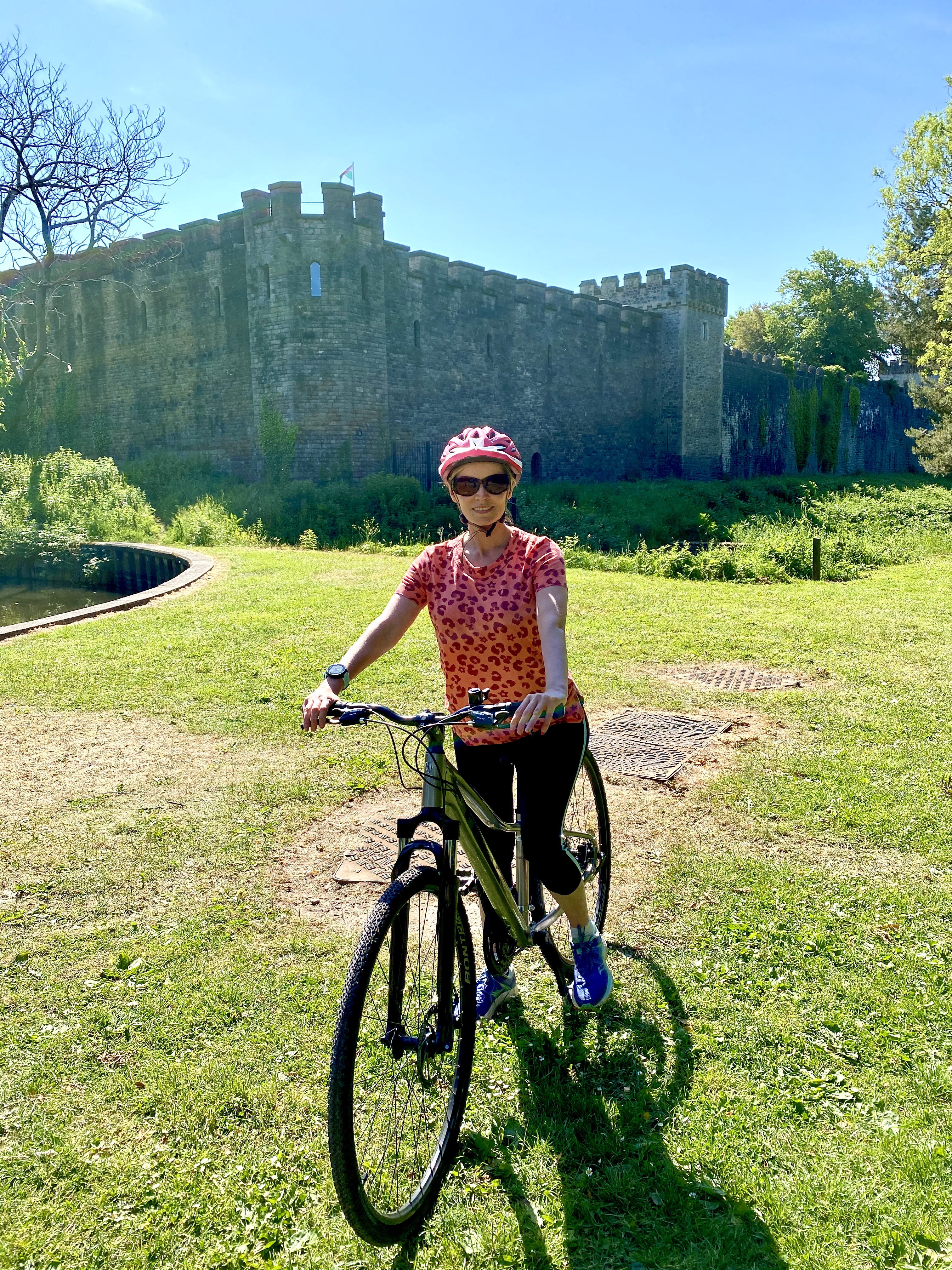 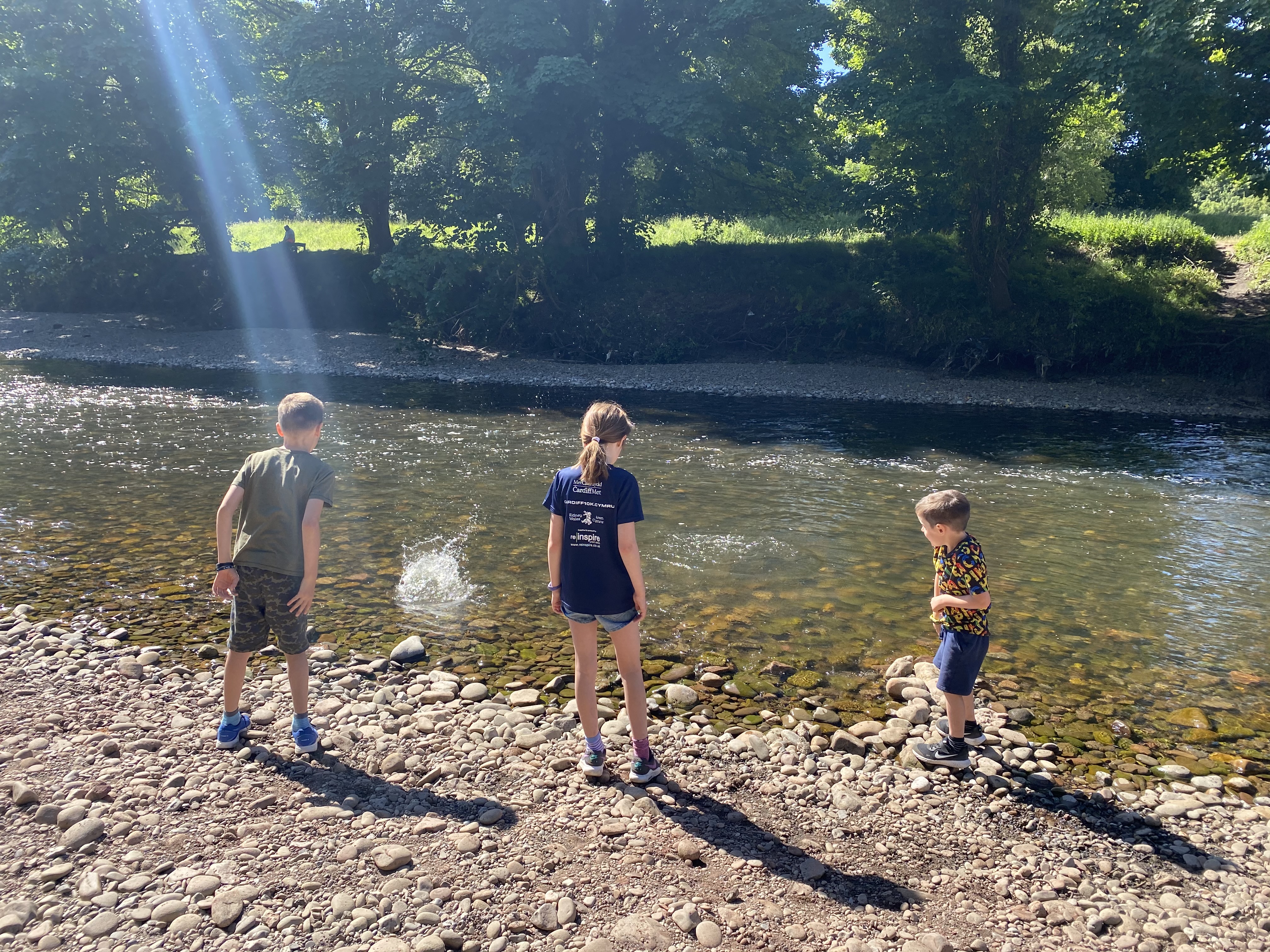 You might have seen over on the Cardiff Mummy Says Instagram channel that I have a new bike. It was supposed to be a birthday present last year (11 months ago!) but for various reasons we never got round to ordering it. For various reasons we had a nightmare getting hold of it during current circumstances but, finally, three weeks after we first ordered it, my shiny new bike – the first bike I have owned since I was about 12 or 13 – arrived and off we set on an 8 mile bike ride along the Taff to Bute Park and Cardiff Castle.

I’ve missed Bute Park a lot these last couple of months; it’s slightly too far for us to walk there and back but it was great for a cycle ride. Two days later, we headed the other way up the Taff Trail towards Forest Farm, stopping off along the banks of the Taff to throw pebbles in the river and even a spot of paddling. 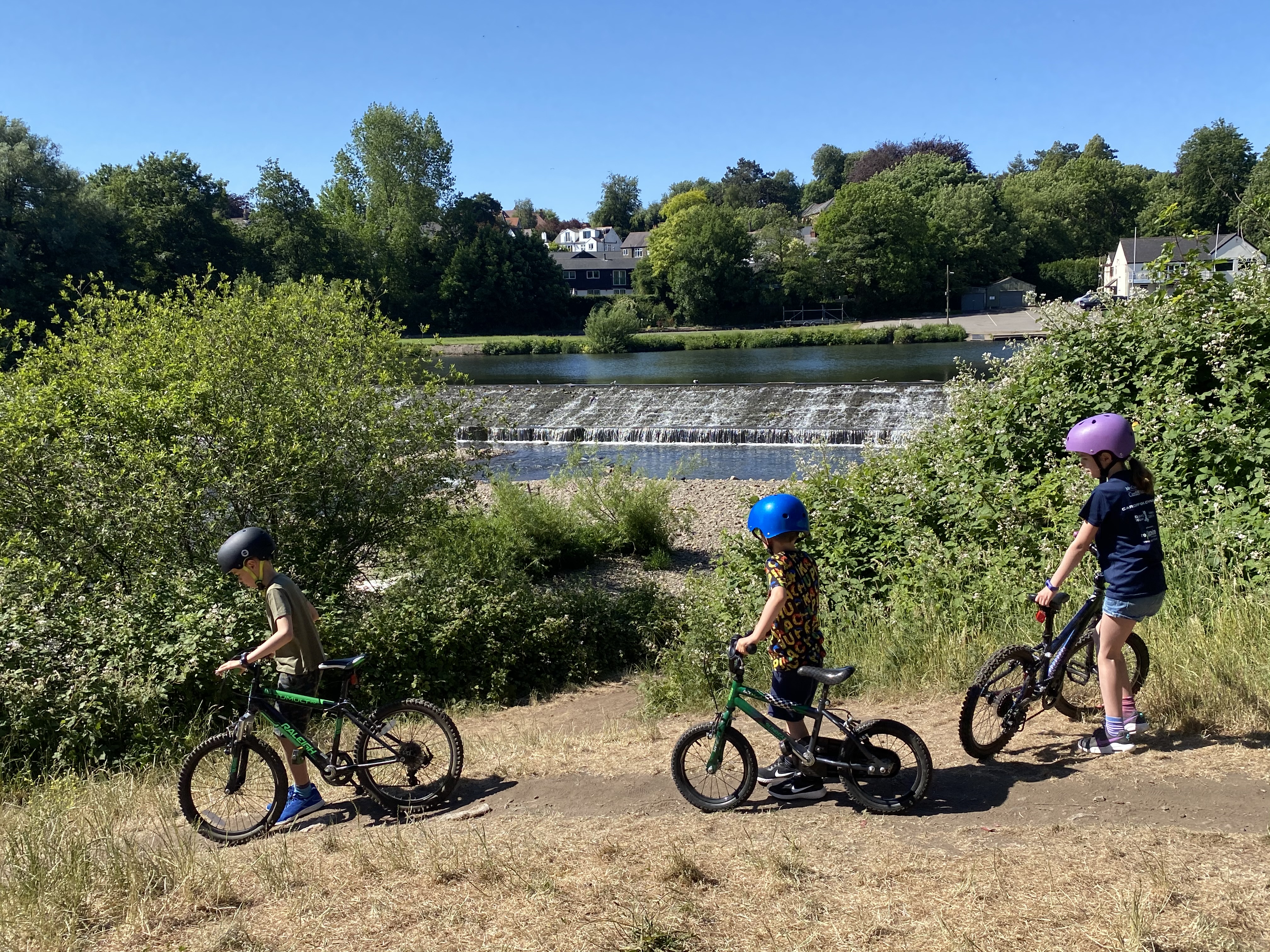 No, the last 10 days weren’t quite the Parisian vacation we had planned, but the combination of fresh air, being able to go further a field with our bikes, visiting much-loved places we hadn’t seen since before lockdown, sleeping under canvas and partying in our garden, meant it felt like we’d had a break from the ‘new normal’. Above all…

We created happy family memories during the strangest and most uncertain of times.

Have you tried, or will you be trying, to replicate the holiday experience at home during lockdown? I’d love to hear your ideas in the comments below, on the Cardiff Mummy Says Facebook page, or you can tweet me on @cardiffmummy or tag @cardiffmummysays on Instagram.