“They’ve drawn on the sofa!” my sister-in-law – let’s call her Gloucestershire Auntie – wailed, speedily ripping the cream covers off the cushions.

Indeed, someone had most obviously drawn over the settee with big strokes of black felt tip pen. I felt her pain.

As she sprayed on the Vanish, bundled everything in the wash, and confiscated the pens, I set about finding out who the culprit was.

Moments earlier we had just been saying how lovely it is that the cousins are all such good friends who play together so well. Not to mention how nice it is for the grown-ups – Cardiff Daddy and I, Gloucestershire Auntie and Uncle (Cardiff Daddy’s sister and her husband) and Bristol Uncle and Auntie (Cardiff Daddy’s brother and his wife) – to be able to sit and actually chat now that the children are getting to an age where they are able to play without such close supervision.

“Well, who was it then?” I asked. “Toddler Boy I,” one of then piped up, referring to my youngest child and the youngest of the six cousins. “Yes, he did it, he did it,” they all said, pointing at him.

I asked if anyone had seen him do it. No one had, but they were adamant it was him.

I did my best to ask Toddler if it was true but he doesn’t speak much yet and looked at me blankly. I tried to explain that we don’t draw on furniture while inwardly wondering how much new sofa covers would cost to pay for the damage.

Meanwhile, someone noticed that Cousin H, the other two-year-old, had black pen all over his hands. It seemed the evidence had been found just in time to prevent a great miscarriage of justice.

But that still meant the eldest four had lied. I explained to them we were more disappointed by the lying than the modern art, especially as Toddler can’t yet defend himself. They told me they understood and wouldn’t do it again. The rest of the afternoon passed by without any major drama.

Until it was time for us to head home, that is, and Auntie noticed the blinds in the play room had been pulled down. The rule in their house is that children aren’t allowed to touch the blinds. Again, no one accepted responsibility and they all blamed each other.

The next morning I messaged our family Whatsapp group to ask if the settee covers were okay. They were, thankfully. All the pen had come out in the wash.

However, it seems we still need to work on the idea of taking responsibility for one’s actions. They were all still blaming each other for the blinds, two of the cousins said no one drew on the sofa, and Bristol Uncle said Cousin H had implicated two of his older cousins as additional artists. Were their pen-free hands just a sign that they were better at covering their tracks than Cousin H? Or were they telling the truth that it wasn’t them?

And in Gloucestershire, a picture had been knocked off the wall that morning. Auntie asked her children who did it. Their answer?

At least this time, I know it definitely wasn’t him!

As their mum gently reminded them, he wasn’t even there!

How do you talk to your children about accepting responsibility for inappropriate behaviour? Do let me know in the comments section below, on the Cardiff Mummy Says Facebook page or by tweeting me on @cardiffmummy 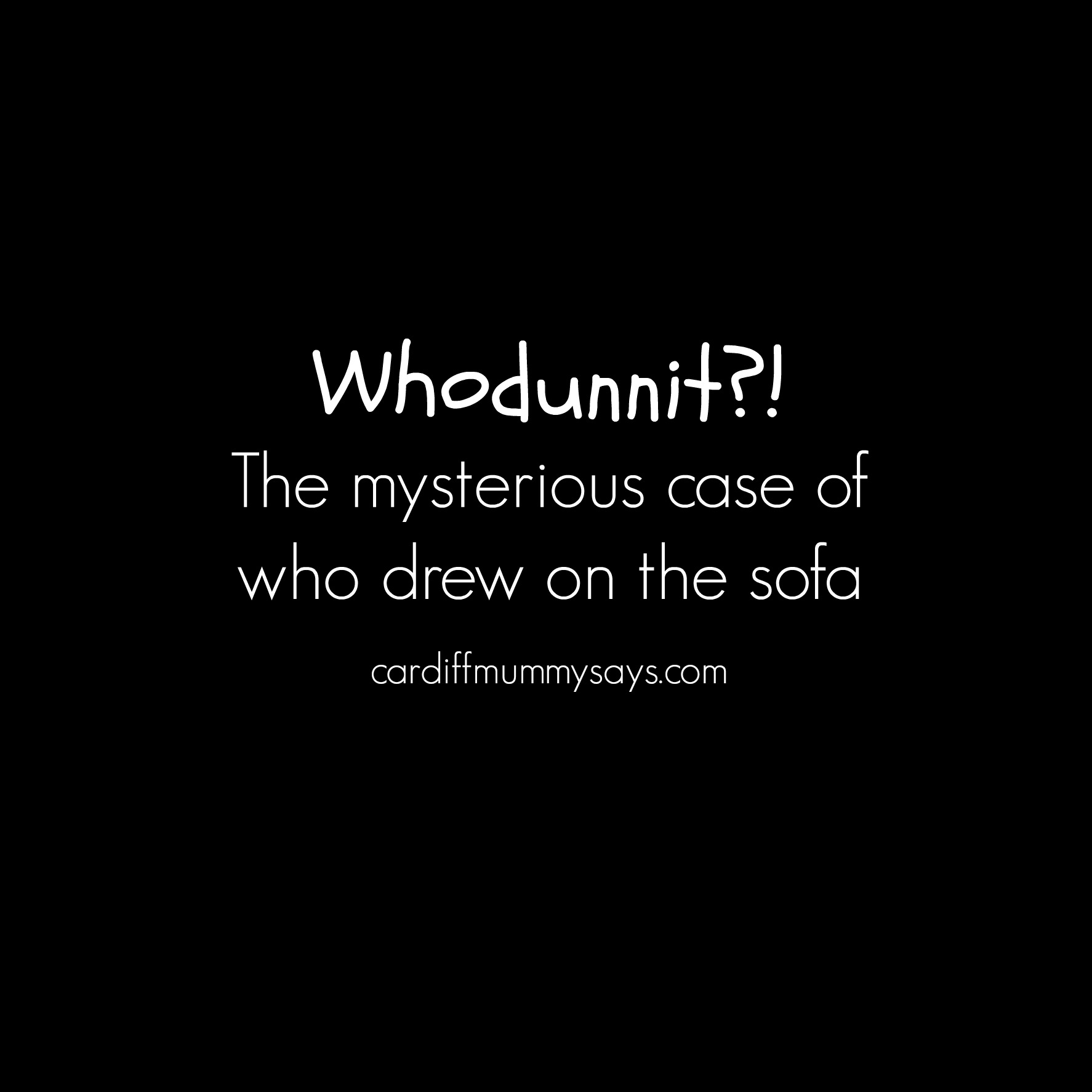 Homepage » Family life » Whodunnit?! The mysterious case of who drew on the sofa

12 Comments to Whodunnit?! The mysterious case of who drew on the sofa